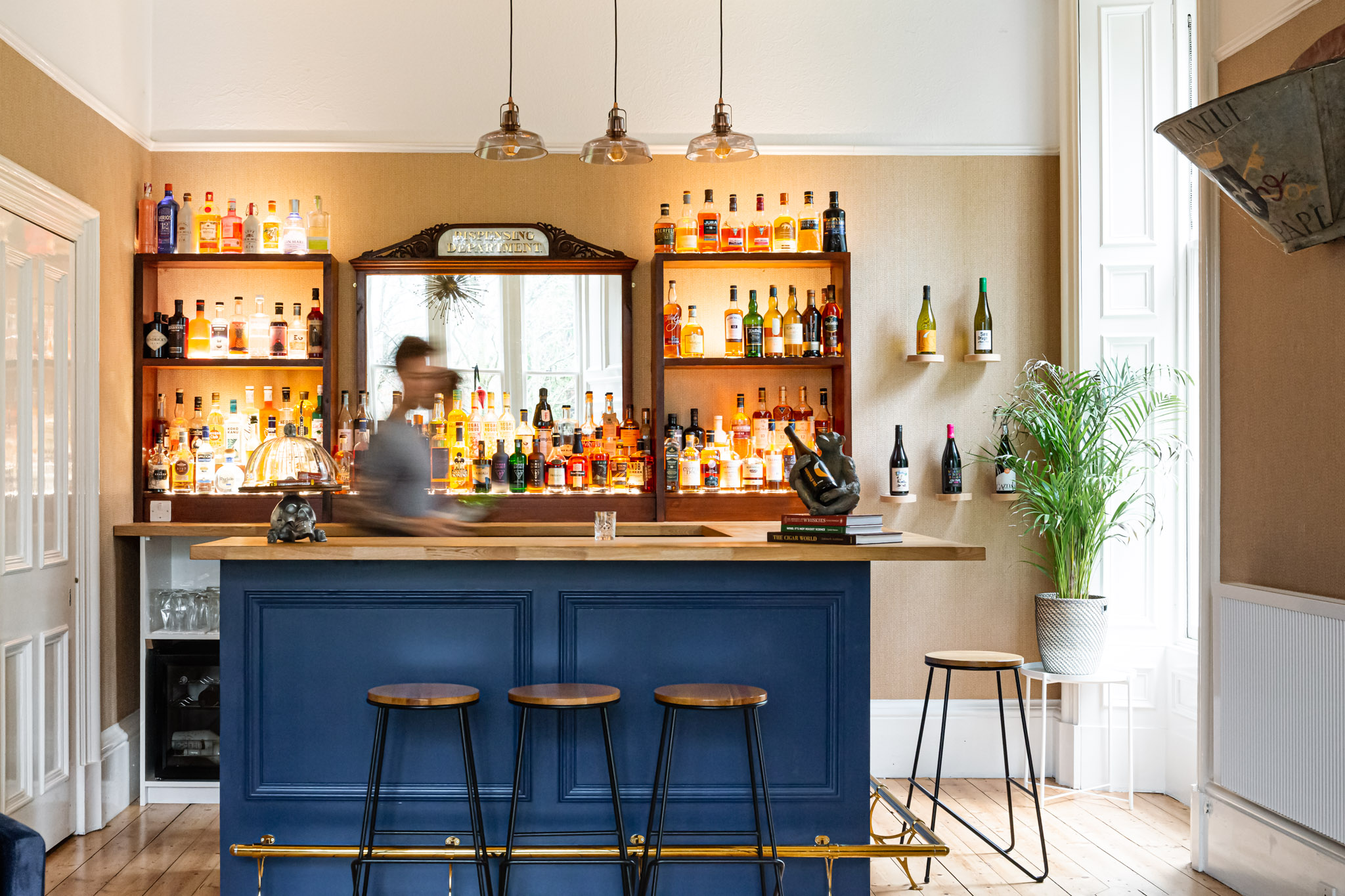 At Saorsa 1875, the UK’s first fully plant-based hotel, every element has been designed to exacting ethical standards – even the duvets are made from recycled plastic bottles. Olivia Palamountain reports

As the trend for all things plant-based shows no signs of abating, the UK’s first all-vegan hotel, Saorsa 1875, has been designed to delight vegans, vegetarians and the plant-curious alike.

Part of a wider hospitality group established by mother and son team, Sandra and Jack McLaren-Stewart in 2018, the hotel is situated in a 19th-century baronial house surrounded by lush gardens, on the edge of Pitlochry, Scotland,  (a popular tourism destination since the Victorian age).

Committed to showcasing that the best experiences in life don’t have to come at the expense of animals or the environment, Saorsa 1875 is part of a exploding band of plant-based hospitality offerings covered by Globetrender that include the Koukoumi hotel (the first and only vegan hotel in Greece), Powerplant, a vegan restaurant at Selina’s London hotel outpost and all-vegan members’ club, Bright.

Saorsa 1875 comprises 11 uniquely styled bedrooms, joined by a fabulous dining room, a bar and lounge complete with open fire and an all-season outdoor yurt for yoga practice and retreats. The hotel is also dog friendly. 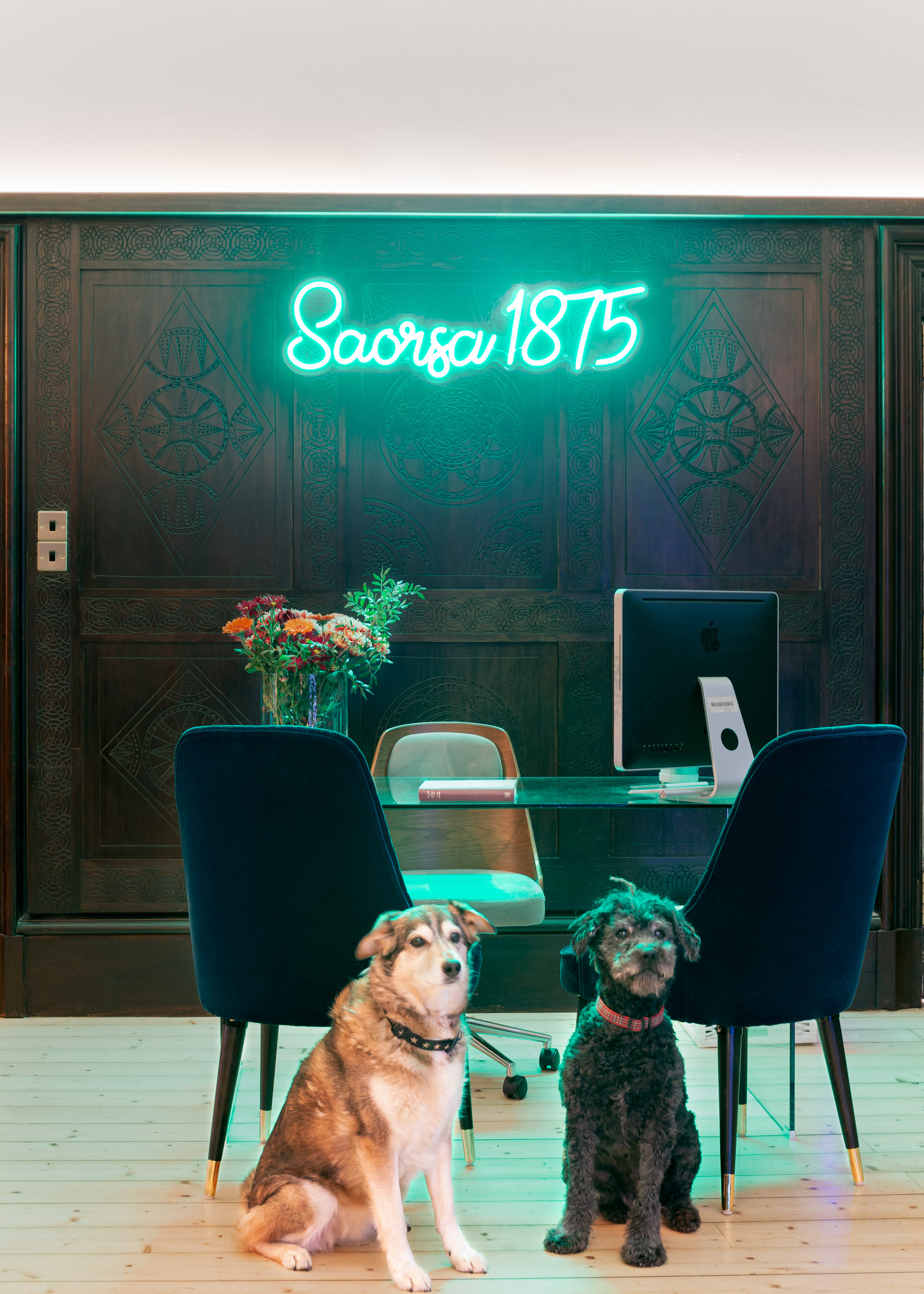 My suite, “Capercaillie” is one of the more humble rooms and on the petite side. One very small window that looks onto the gardens is joined by a double bed, wardrobe and shower room – everything you need and nothing you don’t – plus, the bed is incredible, and covered in a luxurious-feeling duvet made from recycled plastic bottles.

I manage to score a peek at some of the other suites and they are much more exciting, with roll top bath tubs, huge windows and elegant proportions. All rooms enjoy a tea and coffee tray, plus access to a communal fridge containing a variety of homemade plant “mylks” – a lovely touch. 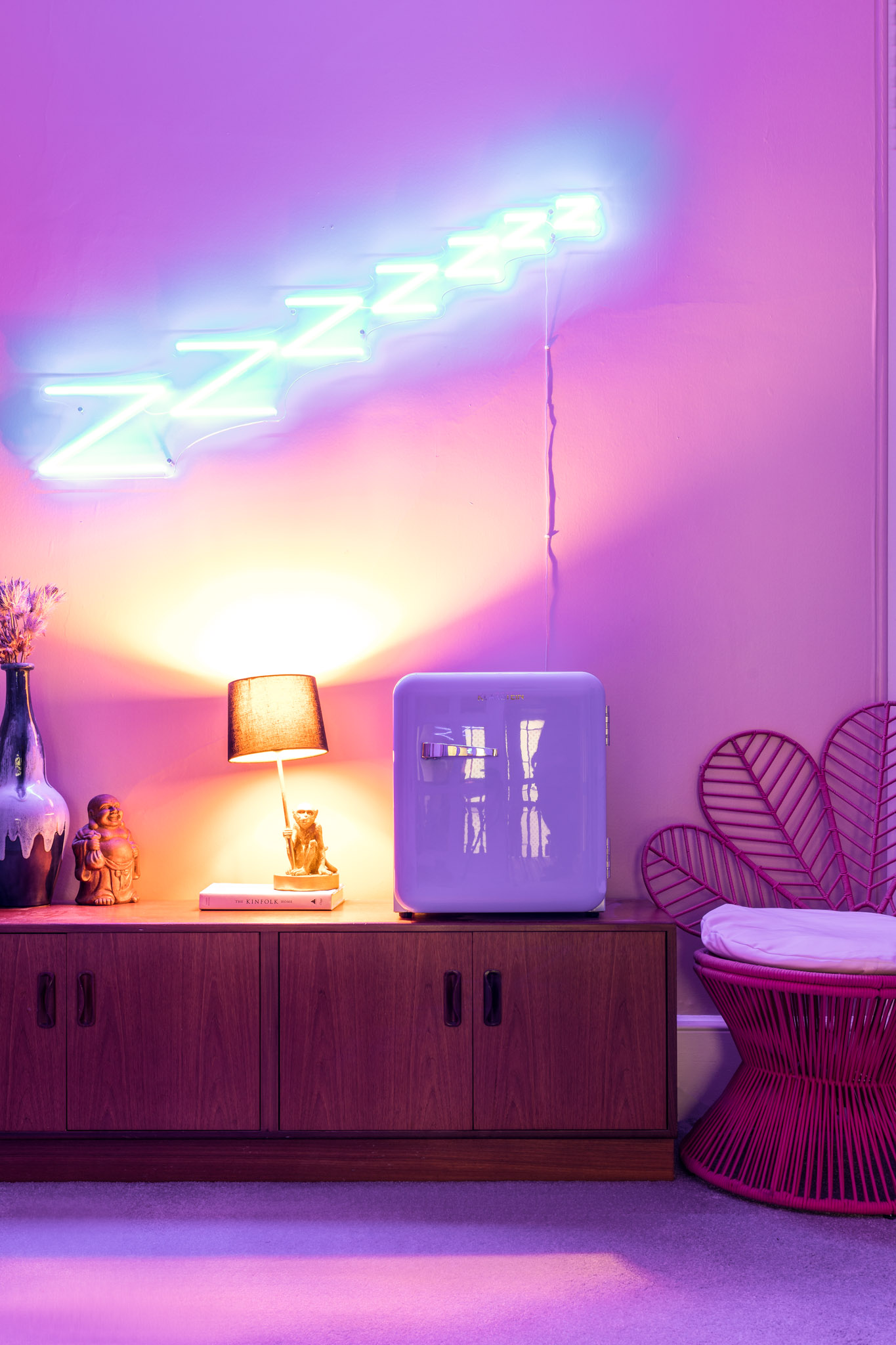 In its communal dining room, Saorsa 1875 offers a completely plant-based lunch and breakfast dishes, plus a five-course set menu at its nightly supper clubs, that showcases local, organic, seasonal and foraged produce, alongside craft beers, a unique wine list and cocktails inspired by the region.

Dinner is an impressive affair featuring the likes of beetroot terrine with horseradish ice cream, aubergine with caramelised shallots, tamarind and white bean and an imaginative dessert of whipped sea buckthorn with burnt meringue, crispy rice, blueberries and tonka bean. 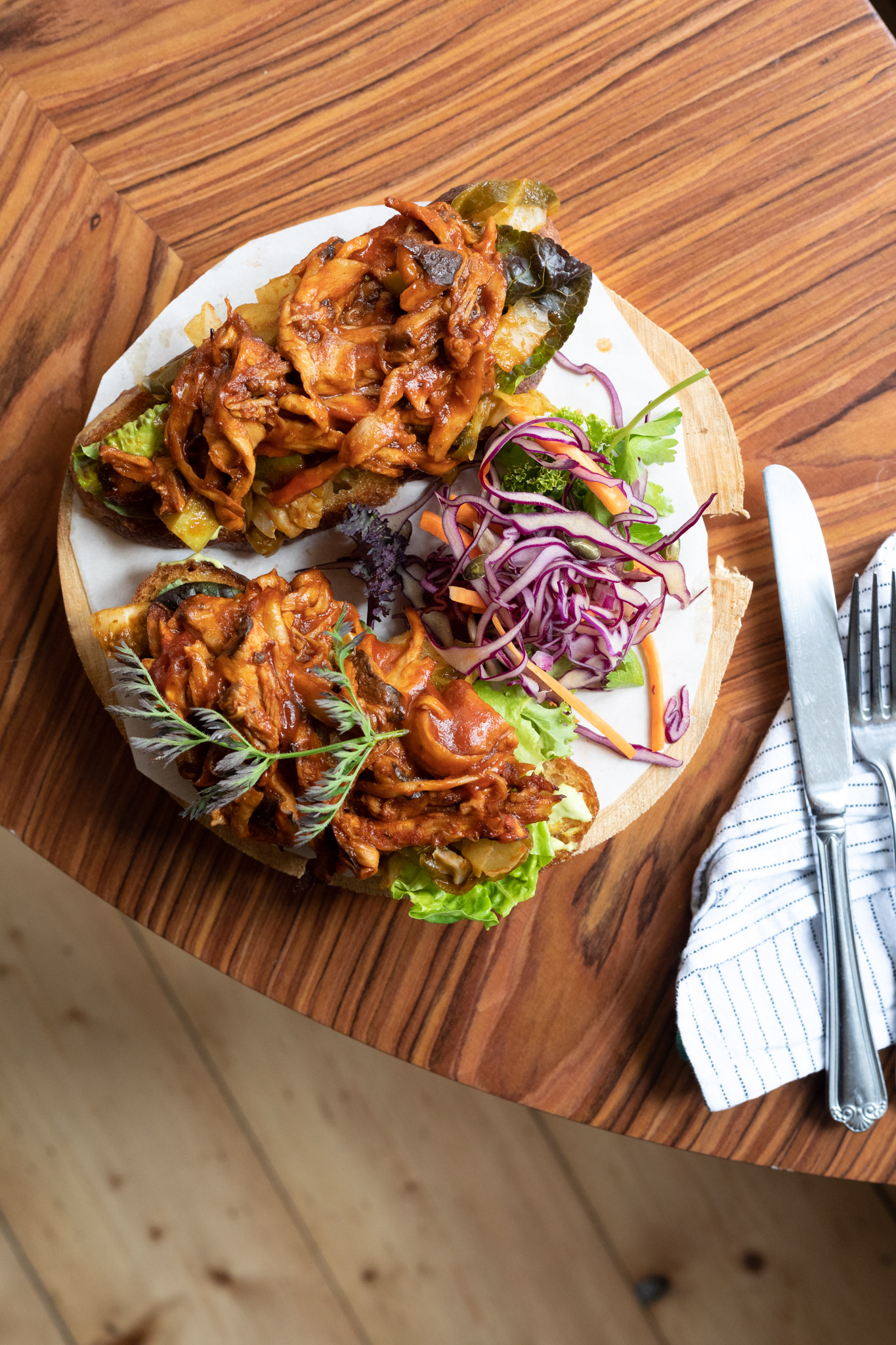 It’s elegant and interesting yet accessible fare that can’t fail to appeal to any appetite – and clearly made with love. In addition, for very dinner served, Saorsa offsets its carbon emissions by planting a tree in conjunction with The Green Earth Appeal.

Despite working with a talented extended team, at its core, Saorsa is a family business. The hotel acts as an extension of the family’s own vegan way of life, grounded in an appreciation for design, food, culture and connection. 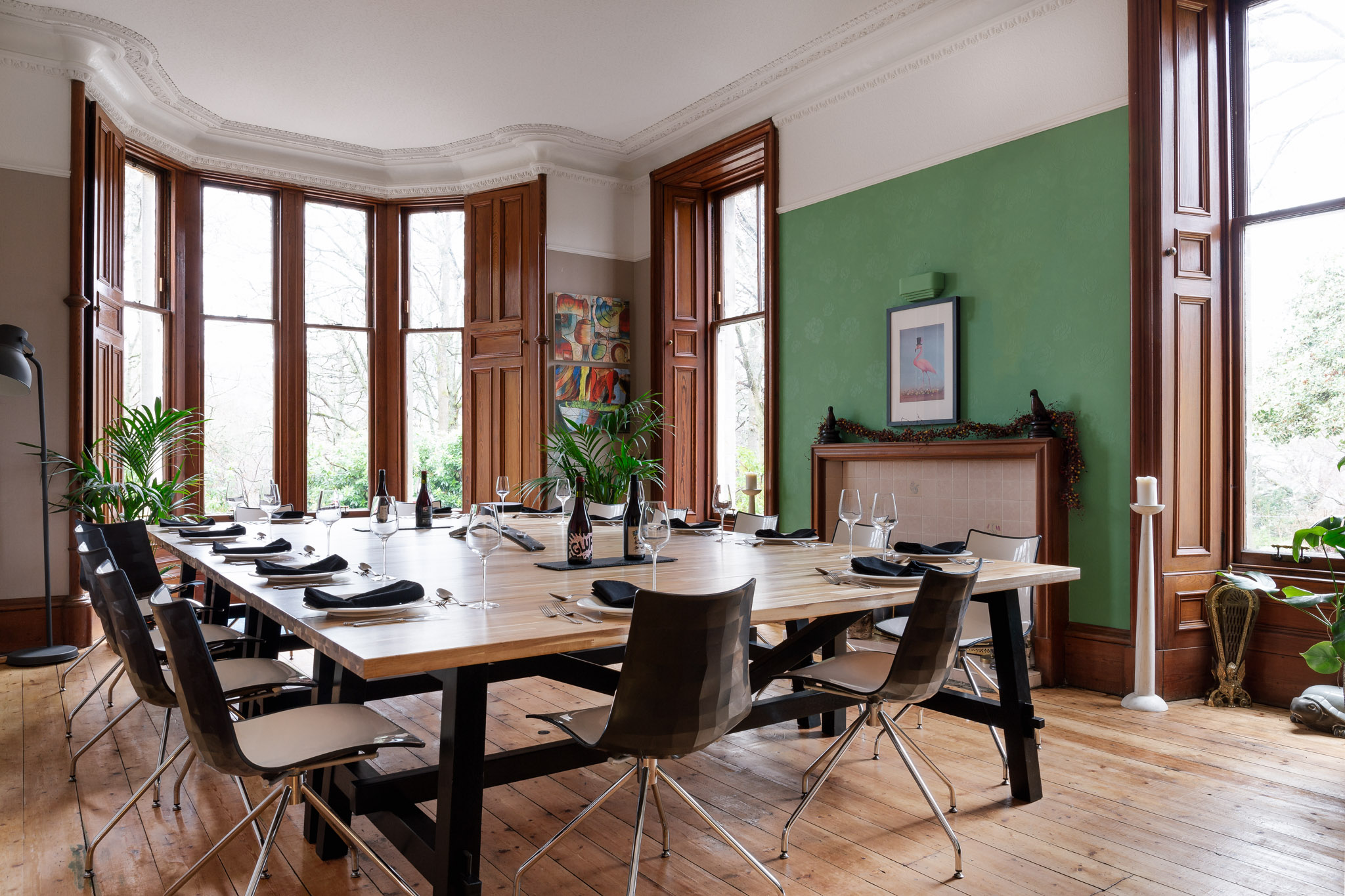 “The best thing about working in a family business is that you have such great knowledge and understanding of the other people’s strengths and a level of communication (honed over decades) that allows you to delegate tasks really well,” says Jack.

“The worst thing is probably separating work and family time – when we get together for dinner it has a tendency to devolve into a business meeting.”

The decision to open a vegan hotel was something that evolved over a period of time due to a few reasons. First and foremost it was a recognition that “veganism is this incredibly vibrant, fast moving, growing culture and yet, despite all the advancements we’ve seen in food and fashion, hotels have been really slow to respond,” says Jack.

“There’s this incongruence in a lot of ‘vegan’ places where you might be able to go into their restaurant and order amazing vegan food but you’re sat on a leather chair – and when you go to bed you’re curling up under down duvets and silk sheets.” 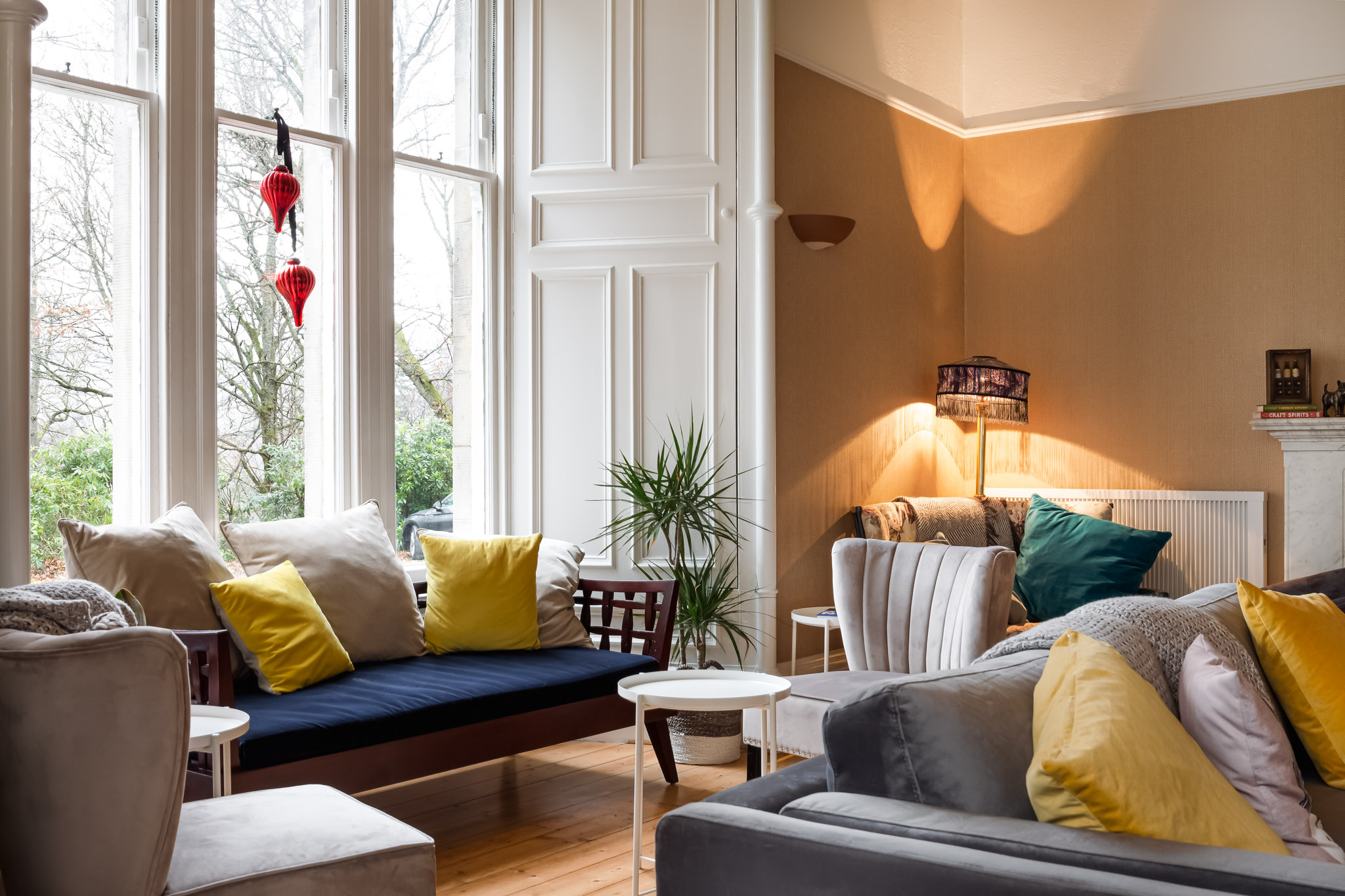 Ultimately the team wanted to create a space that was a haven for vegans but that could also serve as an entry point for people wanting to learn more about veganism or experience a vegan lifestyle  – even just over a weekend.

When Saorsa 1875 first opened its doors, the vast majority of guests were vegan, but while the hotels still hosts a significant percentage of vegans, they’re “seeing more and more people who aren’t vegan but have heard about us and our reputation and are using their stay to explore new ways of eating and living.”

The family styled and furnished the house themselves, harnessing Sandra’s passion for interior design and using the hotel as a platform to express her creativity. 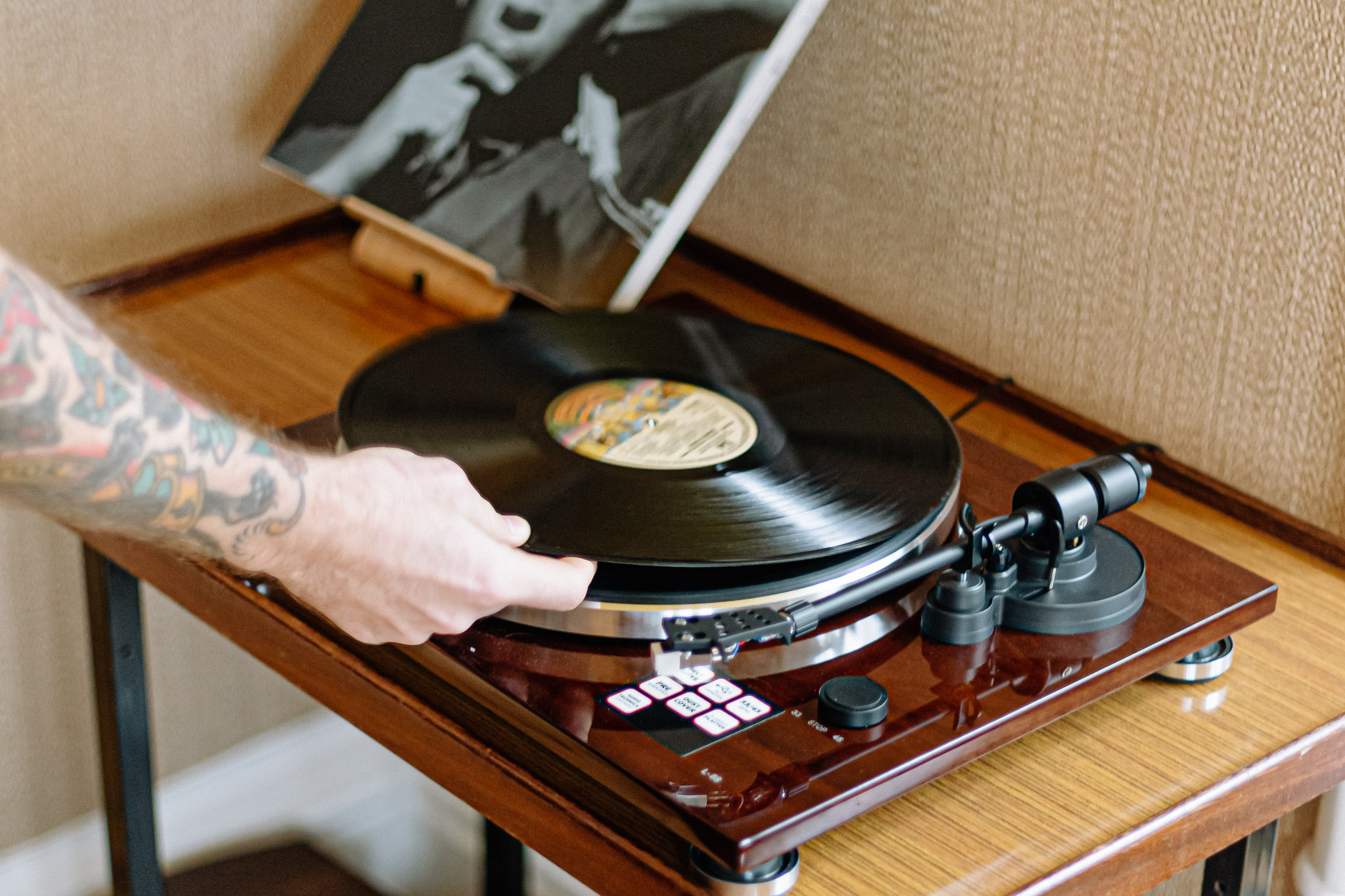 An eclectic eye and unique sense of style is evident throughout, from bold and playful neon-lit accents to quirky animal-themed lamps and objets (the essence of the hotel is that of a private home owned by a fictional, well travelled, interesting – and interested – person who loves to host).

Aside from welcoming guests, the space also acts as a place where the family can share parts of their story and lives too.

Scottish born and breed, the family is incredibly passionate about this beautiful country and its people.

“To us, Pitlochry encapsulates what a trip to Scotland is all about – there’s great culture, picturesque hikes and friendly locals,” says Jack. “Sadly it’s also a place that many vegans might not feel particularly welcome – the Highlands are well known for their love of meat, wool, leather and other animal products — so by setting up here we’re allowing a whole group of people to come and visit who may have previously passed the area by.” 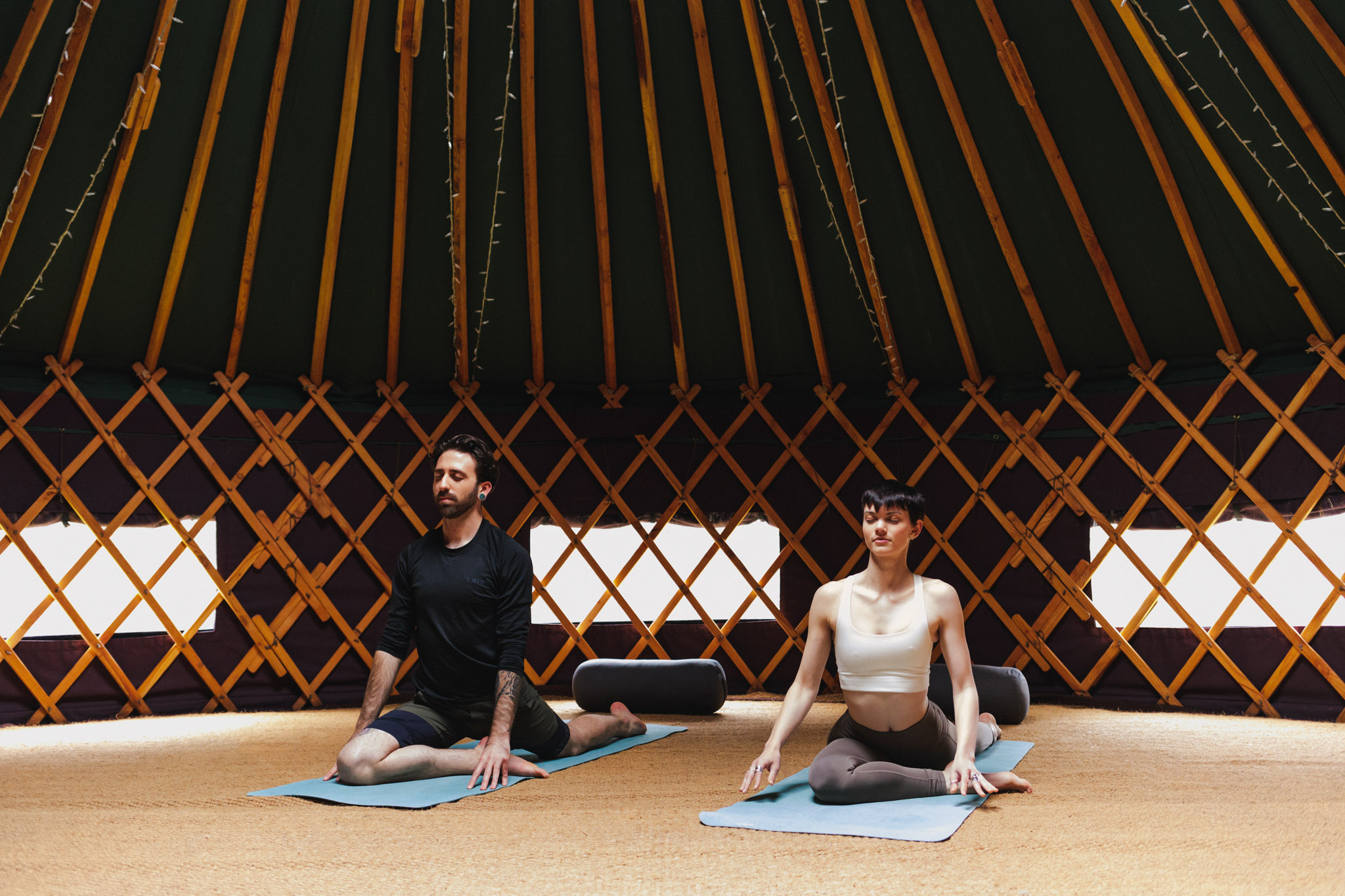 As it happens, Jack didn’t grow up vegan – it wasn’t until I was 21 that he made the change. The catalyst? Watching a local butcher’s shop receive its delivery and seeing dead pigs hanging in the back of the van.

“It was such a visceral experience that I had to go home and research animal consumption and my role in the industry as a consumer. It became pretty clear pretty quickly that not only is animal agriculture devastating for the animals, it’s also terrible for the environment and for our own health. Once I realised that we can lead happy, healthy, vibrant lives without consuming animals, it was a total no-brainer to become vegan.” 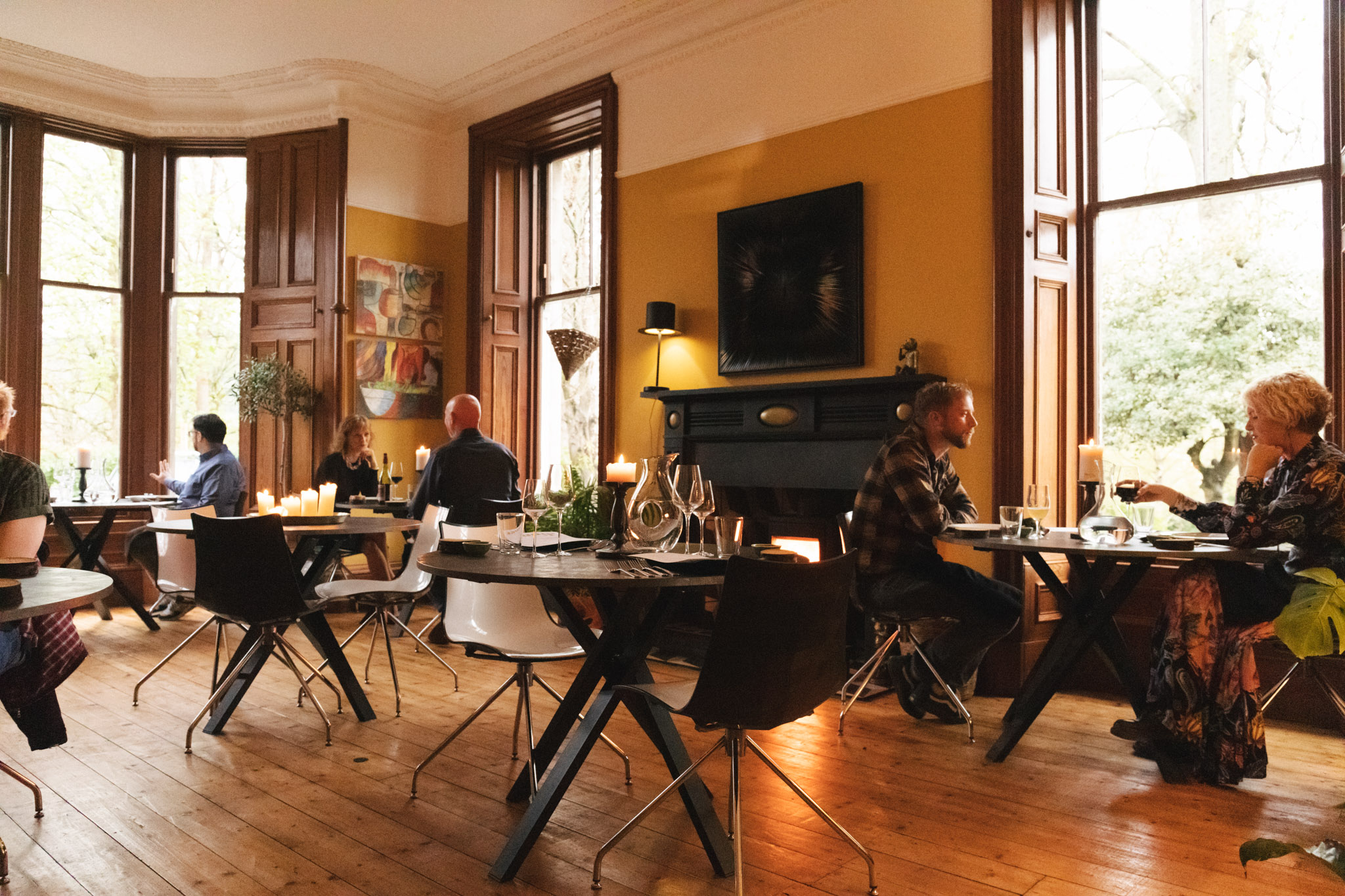 There are big plans for the business on the horizon, including a sister cafe opening in Brighton called Bad Luck Social Club, which is all about vegan food, rock ‘n’ roll and great vibes.

“We’ve won some amazing awards which I’m really proud of,” says Jack.” The National Geographic ‘Good Egg’ award was a particular highlight as I’ve always had a deep affinity with that magazine, but ultimately the greatest pride comes from having a hotel packed full of people who are having an amazing time, eating great food and forming new connections. That’s definitely what brings me the most joy.”