Flower Burger will launch its first London restaurant on Charlotte Street in spring 2021 in collaboration with multi-brand F&B operator Gerry’s Group. Takeaway and collection will be available from January 21.

The Italian plant-based brand is renowned in Europe for its colourful vegan burgers made from all natural ingredients.

Flower Burger buns are the star of the show. They come in every colour of the rainbow, from a vivid yellow bun made with turmeric, a violet bun made with cherry and a purple bun with added blackcurrant extract.

Inside the buns are a variety of vegan patties – both the buns and patties are produced in-house using fresh vegetables, cereals and legumes, without the use of chemical additives or aromas. 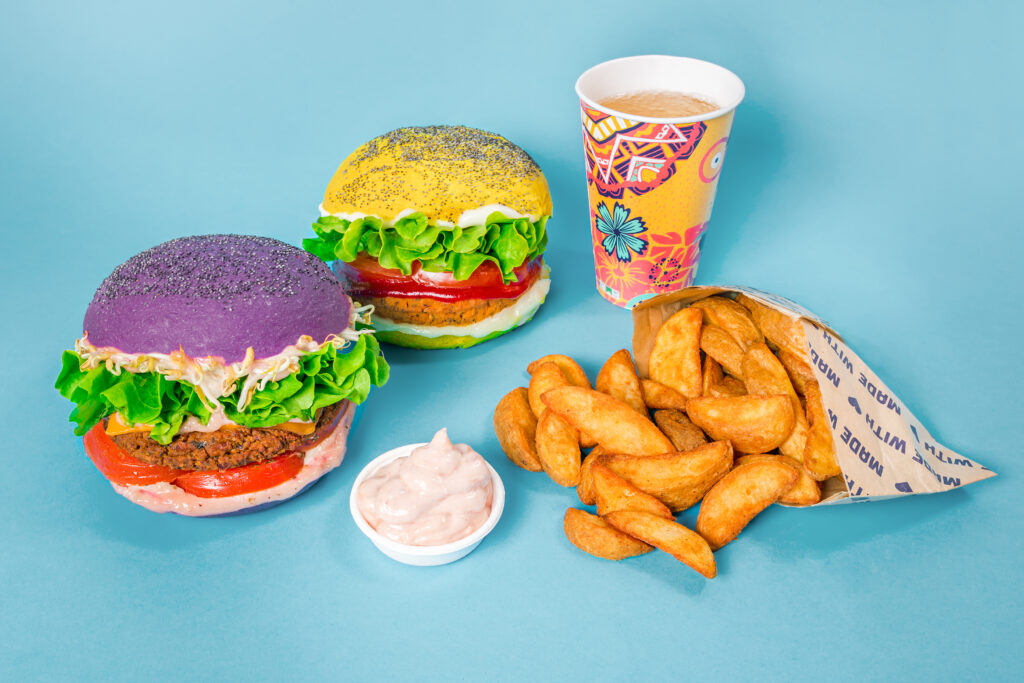 Burgers are paired with a selection of sides including potato wedges, edamame beans and patatas bravas.

New to the menu and created in honour of the UK site will be the Jungle Burger – a green bun made with turmeric and spirulina containing a red bean and oat patty with lettuce, tomatoes, courgettes, signature vegan “Flower Cheddar” and a smoky BBQ sauce.

Classic Flower Burgers on offer will include the Cherry Bomb, featuring a lentil and basmati rice patty in a pink bun coloured with beetroot, and the signature Flower Burger, a seitan and red kidney bean patty served in a purple bun. 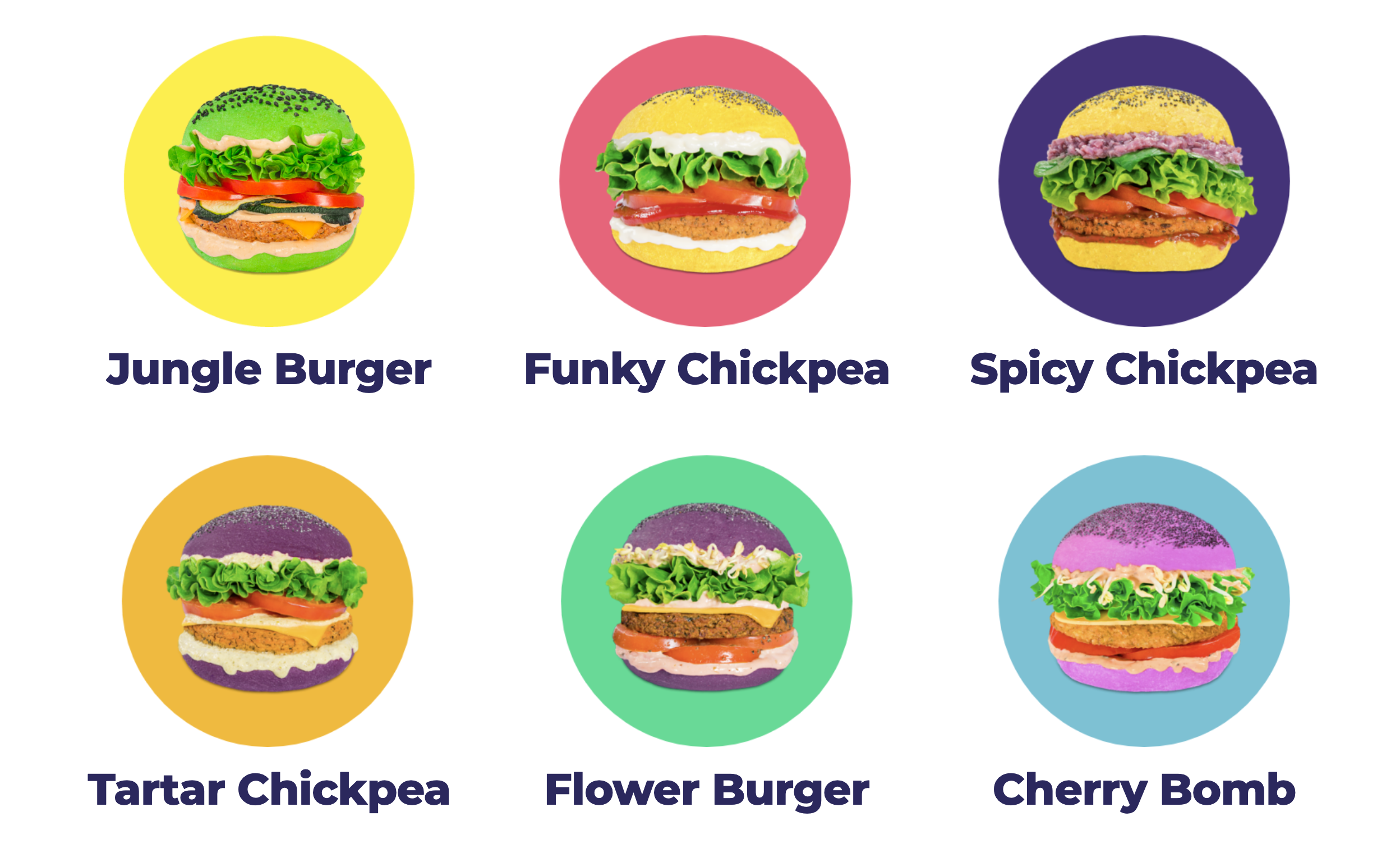 Sweet tooth? Vegan desserts are on the menu too, such as “Coco-nuts”, which is a raw vegan dessert made with creamy coconut heart, espresso coffee, cocoa roasted hazelnuts and a vegan chocolate glaze. Meanwhile, the “Chocolate Salami” is a dark chocolate log made with soy milk, wholewheat biscuits and oat flakes.

Designed in partnership with Italian architect Andrea Langhi, the Instagrammable restaurant has been conceived as a “playful space… extremely colourful and filled with kaleidoscopic graphics mixed with a touch of “flower power”.

The 65-seat site is spread across two floors and features a mural of The Beatles’ iconic yellow submarine that dominates the basement walls.

Small tables and sharing tables covered with psychedelic designs will dot both the upstairs and downstairs rooms, with Eames-inspired chairs, vibrant counter seating and candy-coloured swing chairs suspended from a large metal frame.

Flower Burger’s founder and managing director, Matteo Toto, says: “People do not always associate vegan food with fun and enjoyment. Flower Burger is about changing this perception, with a psychedelic brand and restaurant décor that fits a natural, great tasting and unique product that we produce ourselves.

“We have an ambitious and strong opening plan with the mission to bring a year-long summer atmosphere in all our future locations with passion and love. An inclusive, universal, colourful and playful love that spreads like music and brings cheer.” 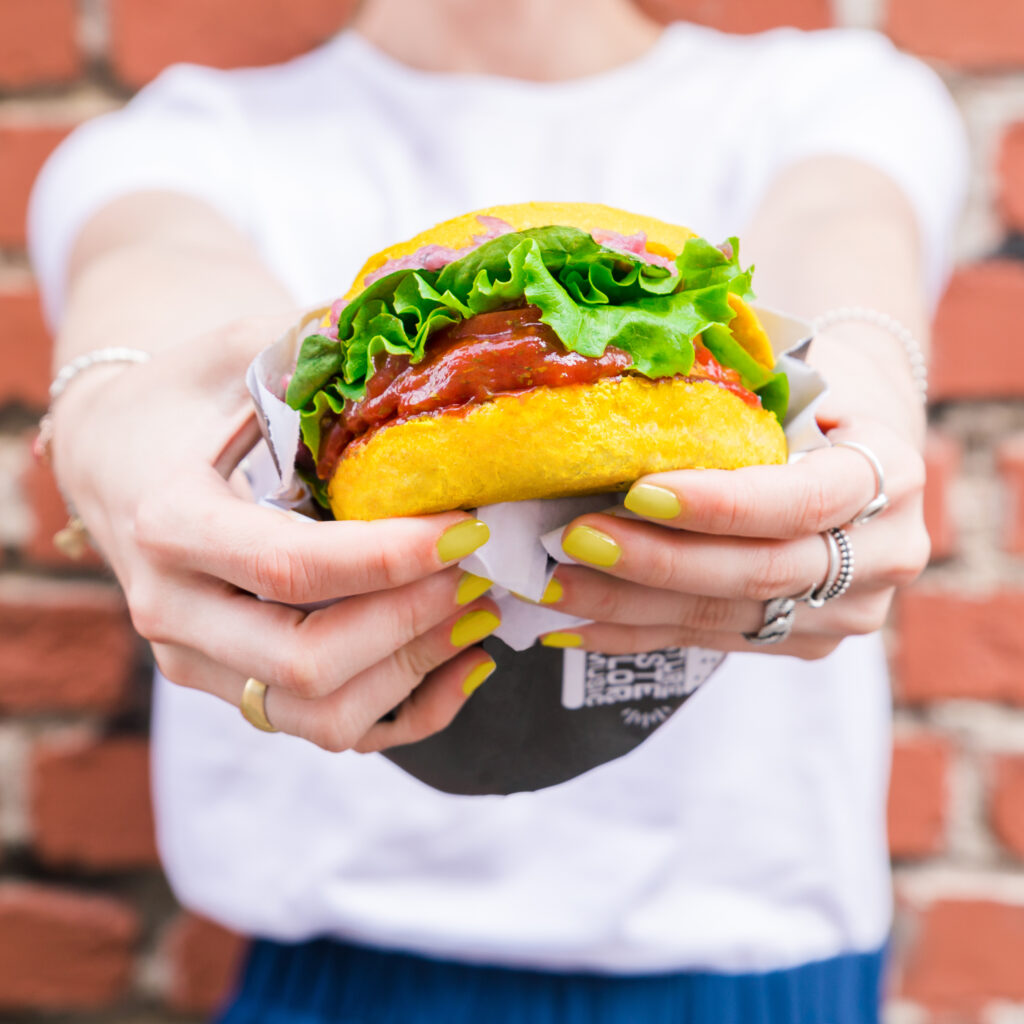 Veganism has exploded in recent years. According to Innova Market Insights‘ 2020 report on the future of plant-based eating, worldwide average annual growth in global food and beverage launches with vegan and plant-based claims grew 21 per cent and 58 per cent between 2015-2019, respectively.

Google Trends identified the UK as the most popular country for veganism in 2019, followed by Australia and New Zealand.

The recent transition from vegetarianism to veganism has been so profound that 2019 was declared “The Year of the Vegan” by The Economist.

Globetrender has reported on the trend extensively, covering everything from Powerplant, a vegan restaurant at London’s new Selina hotel to the launch of vegan dishes on Qatar Airways’ business class menu and Bright Club, a co-working space for vegans only.

Even staunchly carnivorous France is not immune to the wave of veganism influencing our eating habits: this year, ONA vegan restaurant in south-west France was awarded a Michelin star – the nation’s first for an establishment serving only animal-free products. (Seven Swans in Frankfurt is another Michelin-starred vegan restaurant, although it won’t be open until pandemic rules have been relaxed.) 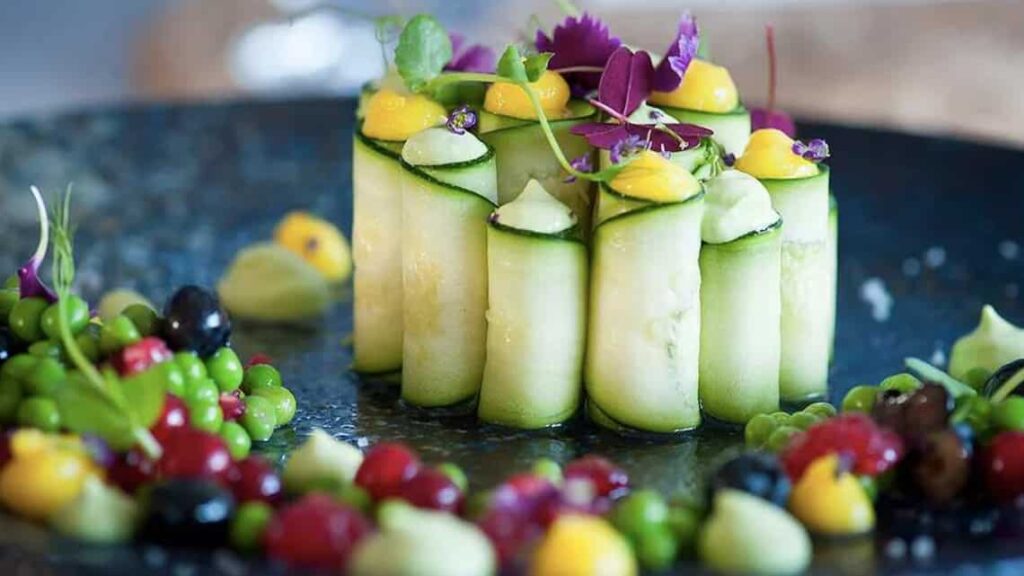 ONA (Origine Non Animale) in Ares, near Bordeaux, was launched via crowdfunding in 2016 by chef owner Claire Vallee. In addition to the award of the classic star, Vallee also won a green star, which Michelin introduced last year to reward establishments with a strong record for ethical practices.