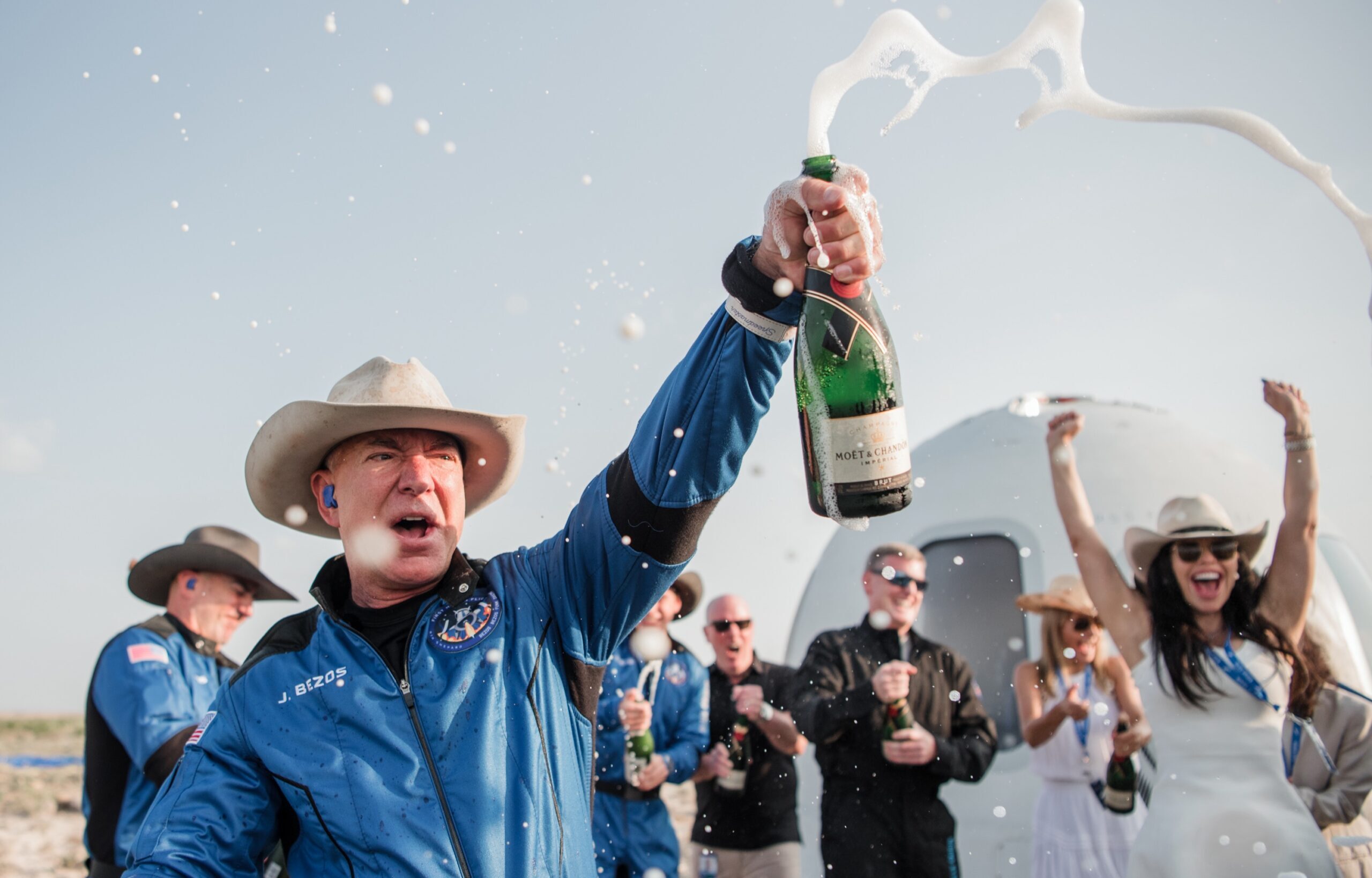 The Earth’s richest man, Jeff Bezos, briefly left the planet on a Blue Origin flight into space, on July 20, 2021, the 52nd anniversary of the first moon landing. Jenny Southan reports

Just eight days after Richard Branson successfully flew to space aboard his Virgin Galactic spacecraft, Blue Origin founder Jeff Bezos completed his company’s first human-crewed mission to the heavens – funded by sales from his other company Amazon. Ascending on a rocket rather than a space plane, the round-trip took just ten minutes, compared to Branson’s, which was just over an hour.

Joining Jeff Bezos was his brother Mark; 82-year-old Wally Funk, a pilot who trained for NASA’s Mercury programme in the 1960s but was denied the chance to go into space because she was a woman; and 18-year-old Dutch student Oliver Daemen, who won a seat on Blue Origin in an auction (the first-place winner paid US$28 million for a ticket but couldn’t fly because of a “scheduling conflict”, it was reported). 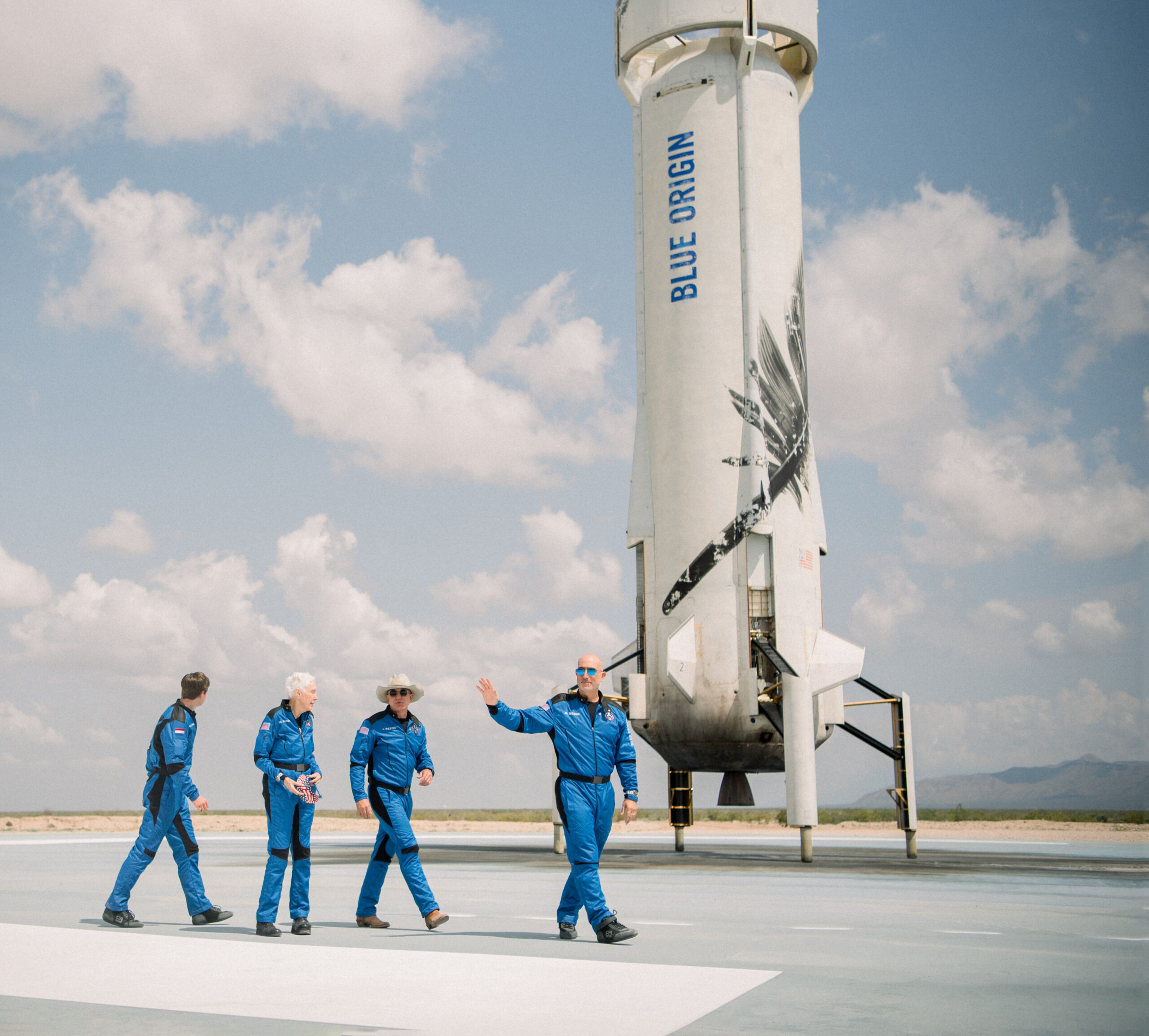 Not only was Daemen the first-ever commercial astronaut to purchase a ticket and fly to space on a privately-funded and licensed space vehicle from a private launch site, but the youngest person to fly in space. Meanwhile, Funk was the oldest person to go into space. 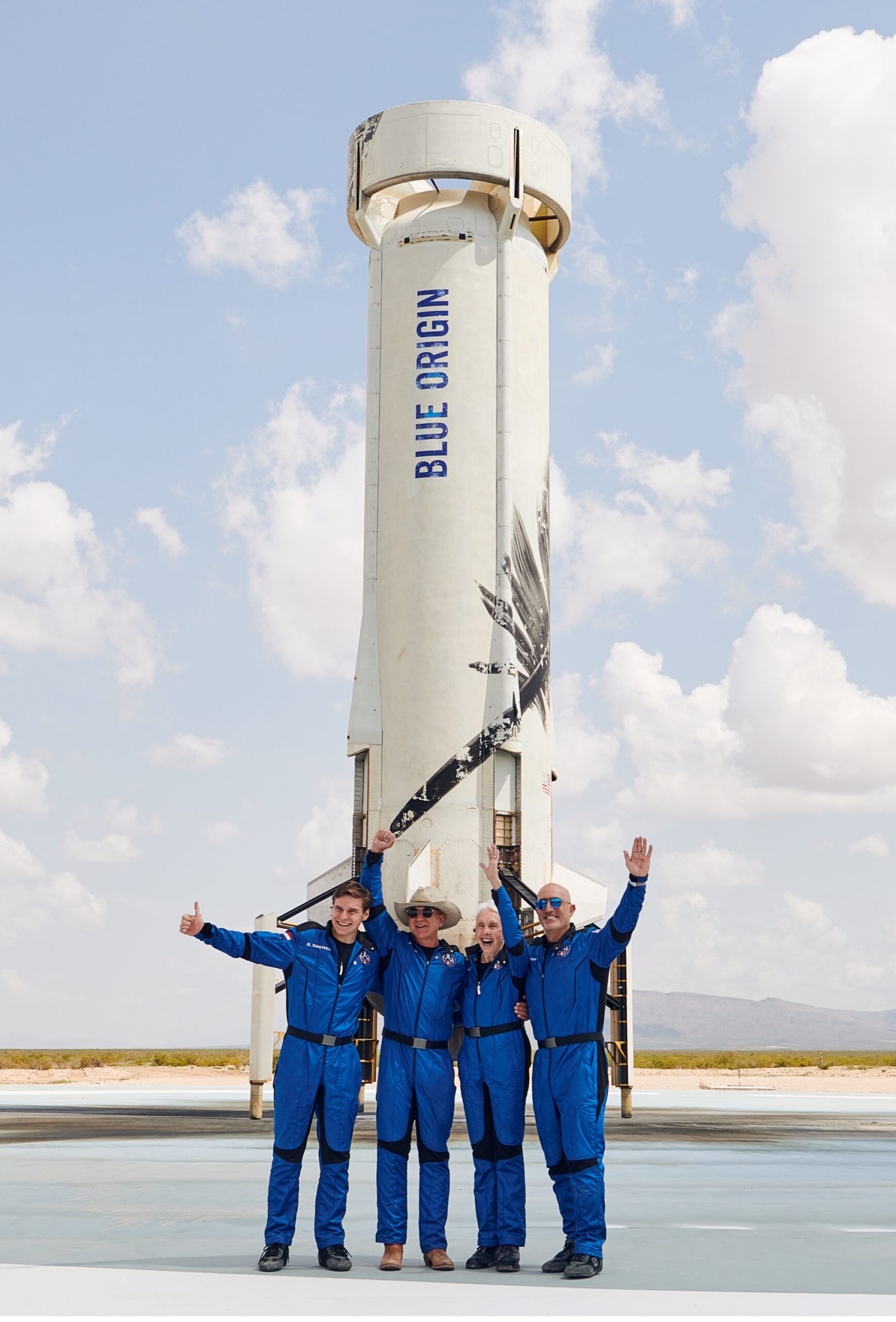 The Blue Origin passengers all officially became astronauts when they passed the Kármán Line, 62 miles up (or 50 miles according to NASA), which is the internationally recognised boundary of space. (Virgin Galactic went 53 miles up.) Interestingly, there was no pilot or crew on board – the flight was all controlled remotely. 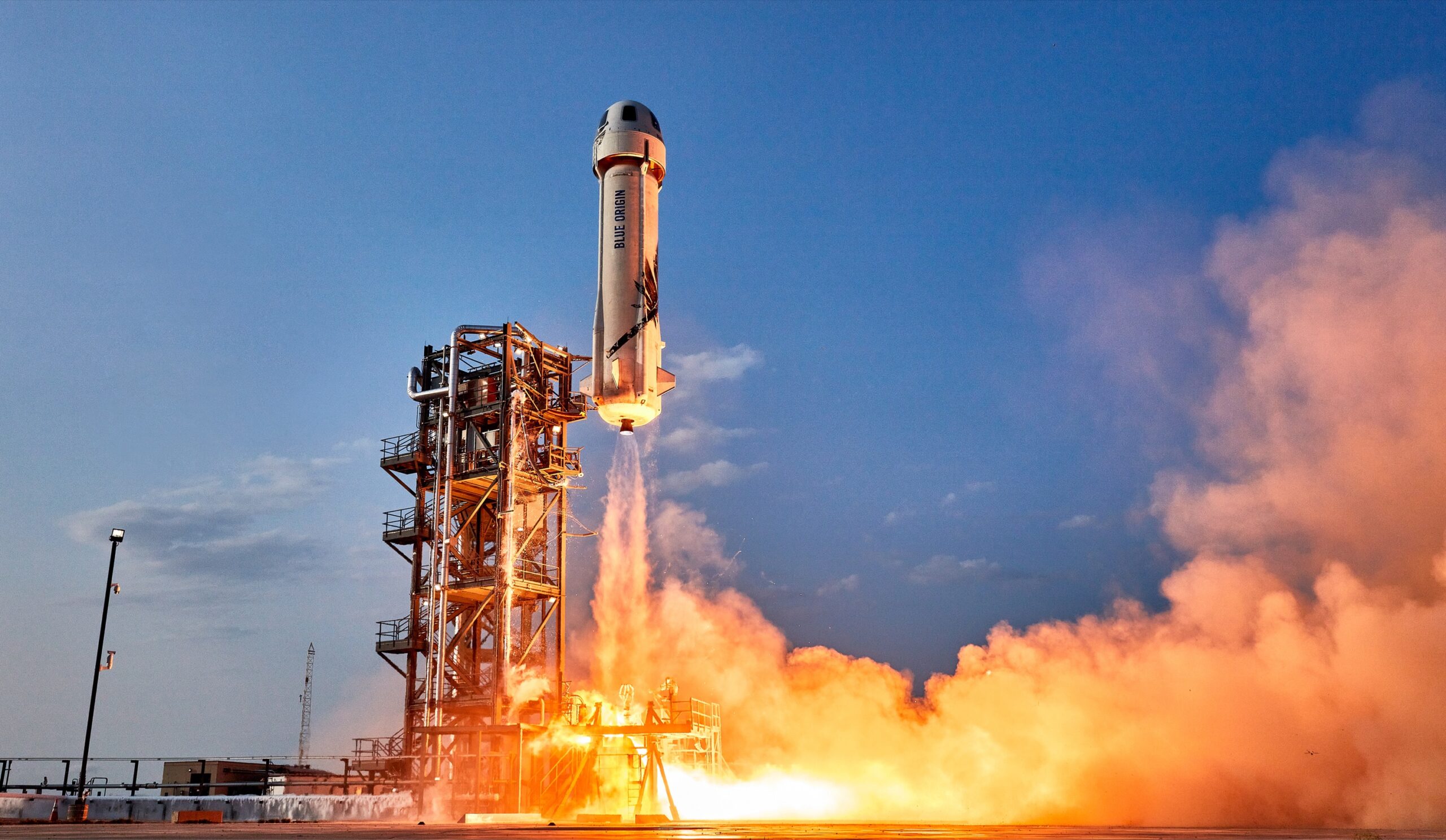 The Blue Origin capsule ultimately reached a point 66 miles up, allowing passengers to unbuckle their seat belts for a few minutes of weightlessness – they did back flips, tossed each other Skittles sweets and whooped with joy. 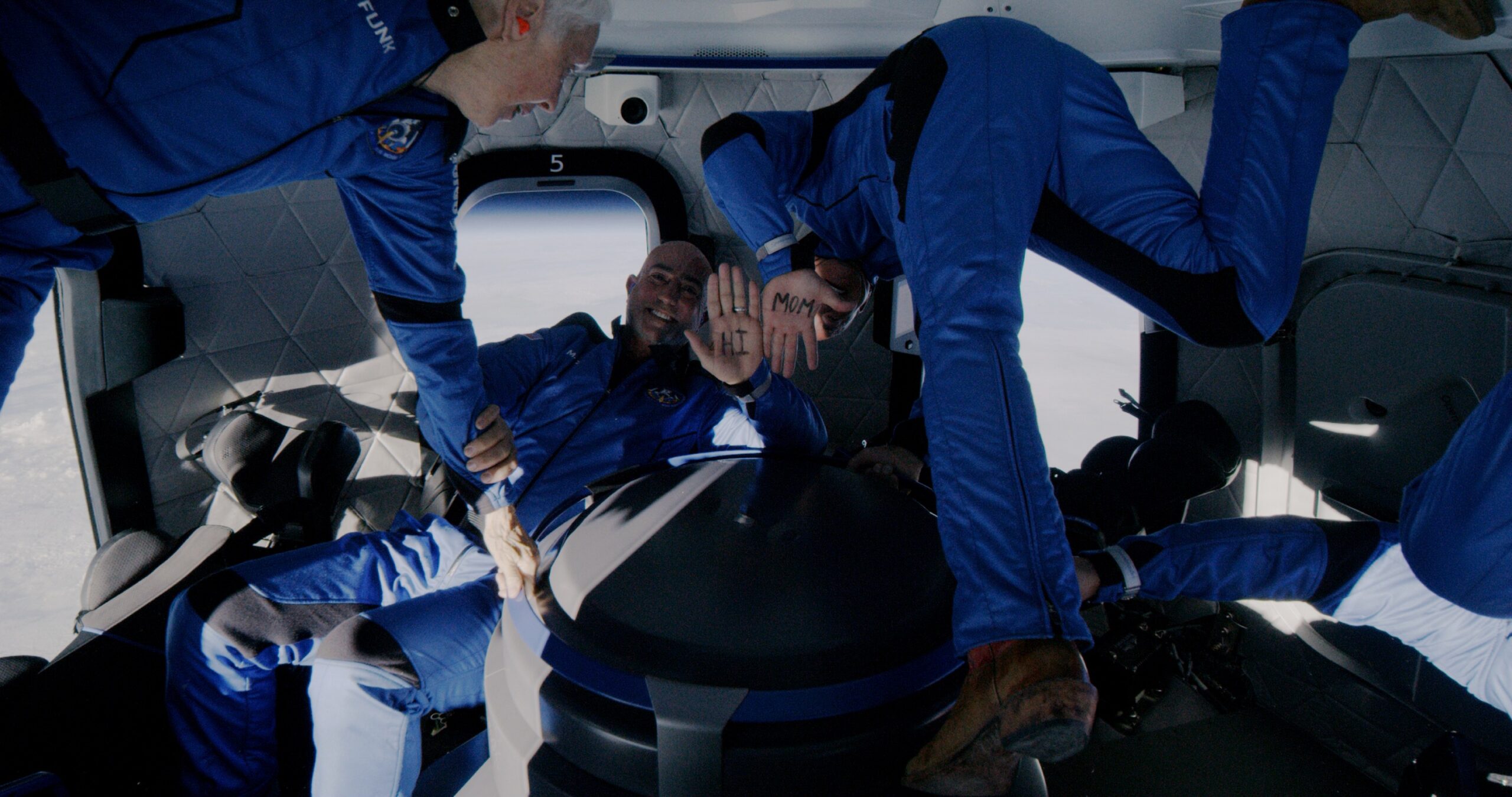 The unit then returned to Earth using a trio of parachutes and a retro-thrust system expelling a “pillow of air” for a cushioned landing. Upon touchdown in the dusty Texan desert, the astronauts were greeted by their families and Blue Origin’s ground operations team for a celebration. Champagne was uncorked and sprayed enthusiastically.

“Today was a monumental day for Blue Origin and human spaceflight,” said Bob Smith, CEO of Blue Origin. “I am so incredibly proud of Team Blue, their professionalism, and expertise in executing today’s flight. This was a big step forward for us and is only the beginning.” 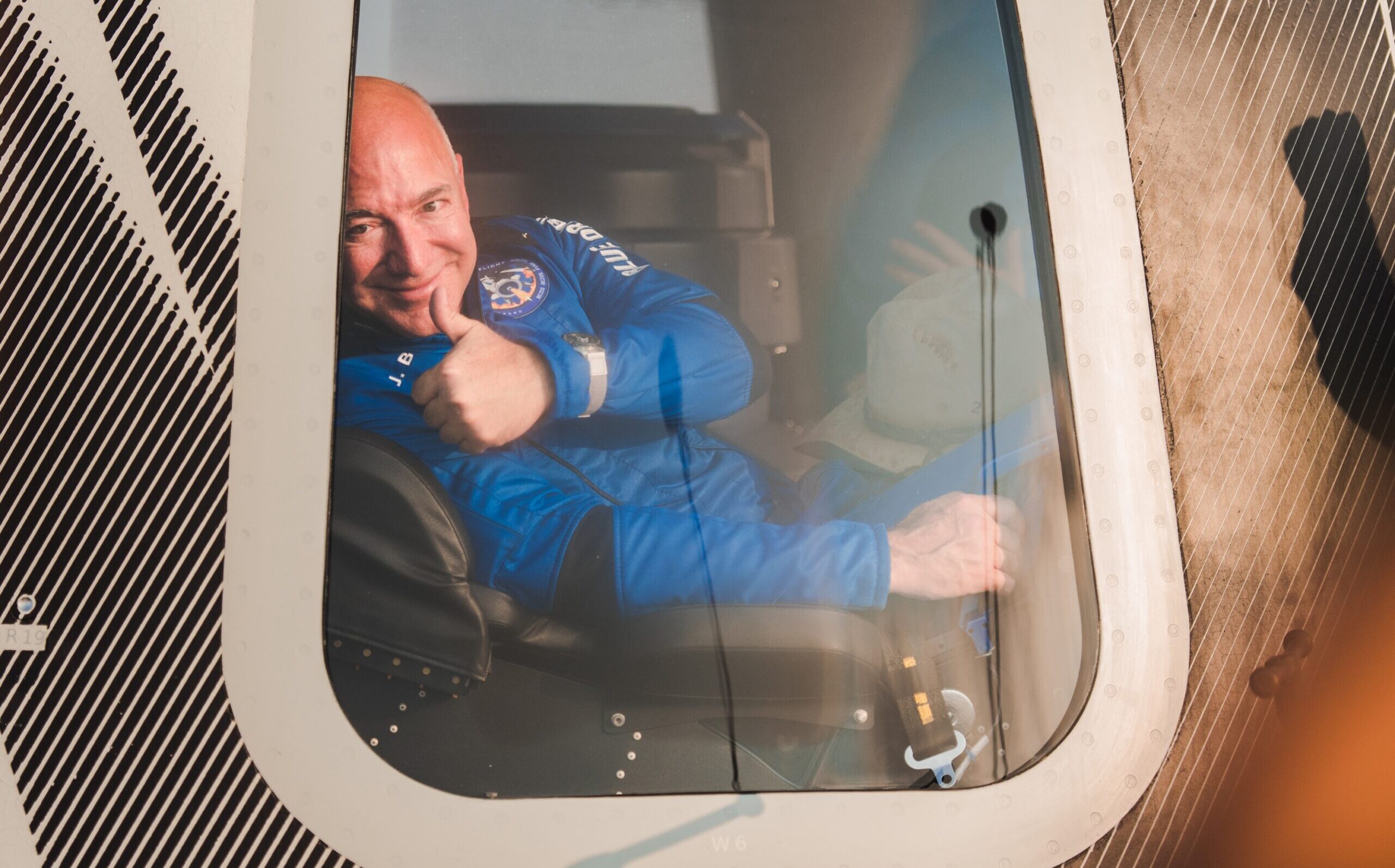 Despite criticism from environmentalists, Blue Origin employs a reusable suborbital rocket system, so the rocket actually descends back down to Earth ready for another mission. It’s carbon footprint is also very low because it is fuelled with liquid hydrogen and liquid oxygen so the main emission is water and almost no CO2 at all.

Jeff Bezos also said after the flight that he was going to be splitting his time between Blue Origin and the Bezos Earth Fund, which is dedicated to fighting climate change. He set it up last year with a US$10 billion investment.