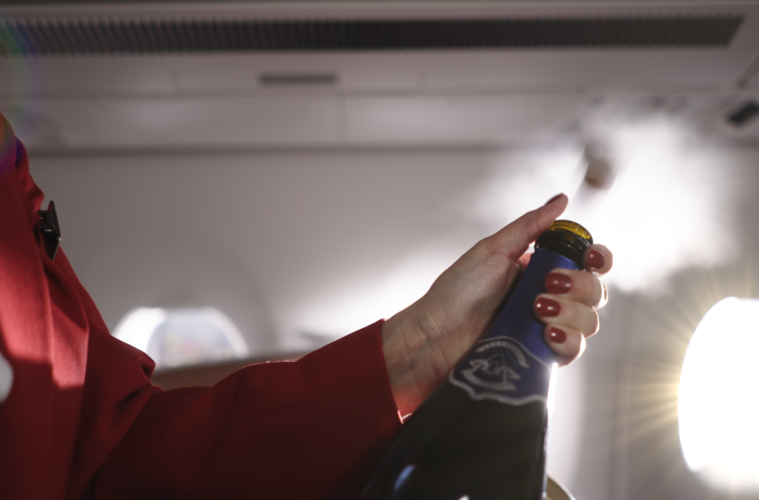 Responding to the growing trend for ASMR content, Virgin Atlantic has released a video revelling in the sights and sounds of flying that people have missed most. Jenny Southan reports

With vacations abroad soon legally permissable, Virgin Atlantic conducted a survey of 1,000 British flyers to ask what “sights and sounds of flying” they missed the most.

Apparently, 82 per cent of respondents missed the pilot speaking over the PA and 78 per cent missed the tinkling sound of the drinks trolley coming down the aisle more than anything else.

At the same time, 76 per cent missed watching in-flight TV shows and movies, 73 per cent missed being welcomed on board by cabin crew and 72 per cent missed the in-flight meal experience. 57 per cent of those surveyed even missed gliding through the airport on the travellator on the way to their boarding gate.

Of course, the resulting “AMSR” video that the airline produced is just a marketing stunt, but here at Globetrender we like companies that have a sense of humour and are embracing cultural trends in creative ways.

Virgin Atlantic says: “Autonomous Sensory Meridian Response (ASMR) is a phenomenon where a person gets a tingling sensation, often starting on the scalp and moving down the neck and spine. This physiological response can be triggered by a number of sights and sounds including whispering, isolated sounds such as tapping and beautiful or ‘oddly satisfying’ imagery.”

The airline’s new video aims to deliver this “tingly feeling” in viewers by fetishising the “bing-bong of the call bell, the click shut of the seatbelt and the evocative pop of the champagne cork” on planes. And we think they have done a pretty good job.

When it came to sights and sounds on vacation, 94 per cent of survey respondents said it was waves lapping on a beach that they missed the most.

Corneel Koster, chief customer and operating officer for Virgin Atlantic, says: “We have missed looking after our customers onboard this past year and cannot wait to welcome them back once restrictions are lifted and travel resumes at scale.

“At Virgin Atlantic, we pride ourselves on offering our customers a brilliantly different experience, so the concept of ASMR and giving people that magical tingly feeling, is the perfect tool to remind our customers of the travel experience that awaits them when they come back to the skies with us.

“Whether it’s the ubiquitous clicking shut of the overhead locker, or the familiar routine of the safety demonstration, it’s the sensory memory of these moments that our customers long for, heading off on their well deserved holidays, starting a fabulous adventure.”

For those who want to watch Virgin Atlantic’s full one-hour ASMR video, here it is. Why bother? Apparently it’s really relaxing…

Dr Giulia Poerio, psychology lecturer at the University of Essex, says: “Scientific research supports claims that ASMR is something that can make people feel relaxed. People with ASMR show significant reductions in their heart rates when watching ASMR videos, reductions comparable to other more well-established stress alleviating techniques such as mindfulness and music therapy.

“We now have more objective evidence that ASMR is relaxing (it’s not just people telling us that ASMR makes them feel relaxed – their physiology is telling us the same thing too). ASMR videos allow people to experience the feeling ‘on demand’ and with greater longevity and intensity.

“This has meant that people use ASMR videos for insomnia, to reduce stress and anxiety and even to provide relief from loneliness. It’s perhaps no surprise then that many have turned to ASMR content so much during the pandemic.

“ASMR-tingling is associated with increased activation in brain regions involved in emotion, empathy and affiliative behaviours. As a result, ASMR has been likened to caring behaviours – suggesting that ASMR activates neurological pathways involved in socioemotional bonding. This idea is somewhat supported by research showing that ASMR videos increase feelings of social connection.”