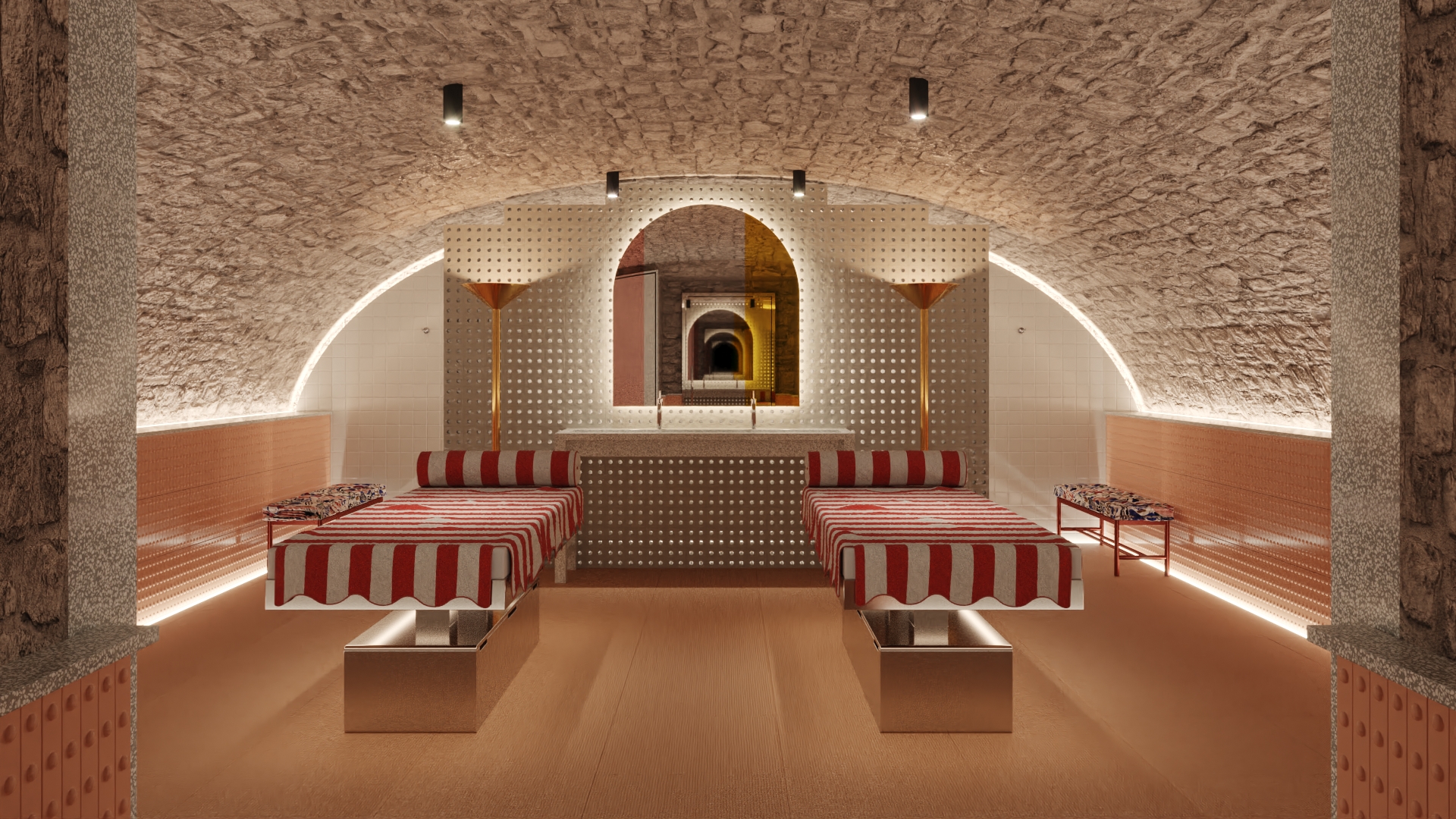 Opening in 2023, Mama Shelter Rennes will embrace the character and culture of a lesser-known French city with its new ‘living intelligently’ concept. Rose Dykins reports

Boutique hotel brand Mama Shelter has announced the French city of Rennes as its next launch location.

Located in Northern France, Rennes is known for its beautiful medieval architecture, as well as being the city with the second-largest student population in France, which adds to its bustling atmosphere.

Mama Shelter Rennes is located in the heart of the city, moments from Place des Lices and the famous rue de la Soif. It is also a five-minute walk from the Sainte Anne metro station and 20 minutes from the nearest TGV rail station – which connects to Paris Montparnasse station in one hour and 30 minutes.

Being situated in the centre of a busy square, the hotel’s location is conducive to people watching, and exploring the independent food shops, restaurant cocktail bar and lounges. Complying with the Architectes des Bâtiments de France [conservation law], the vision is for the property to welcome locals as well as visitors from overseas, and to complement and support existing local businesses. 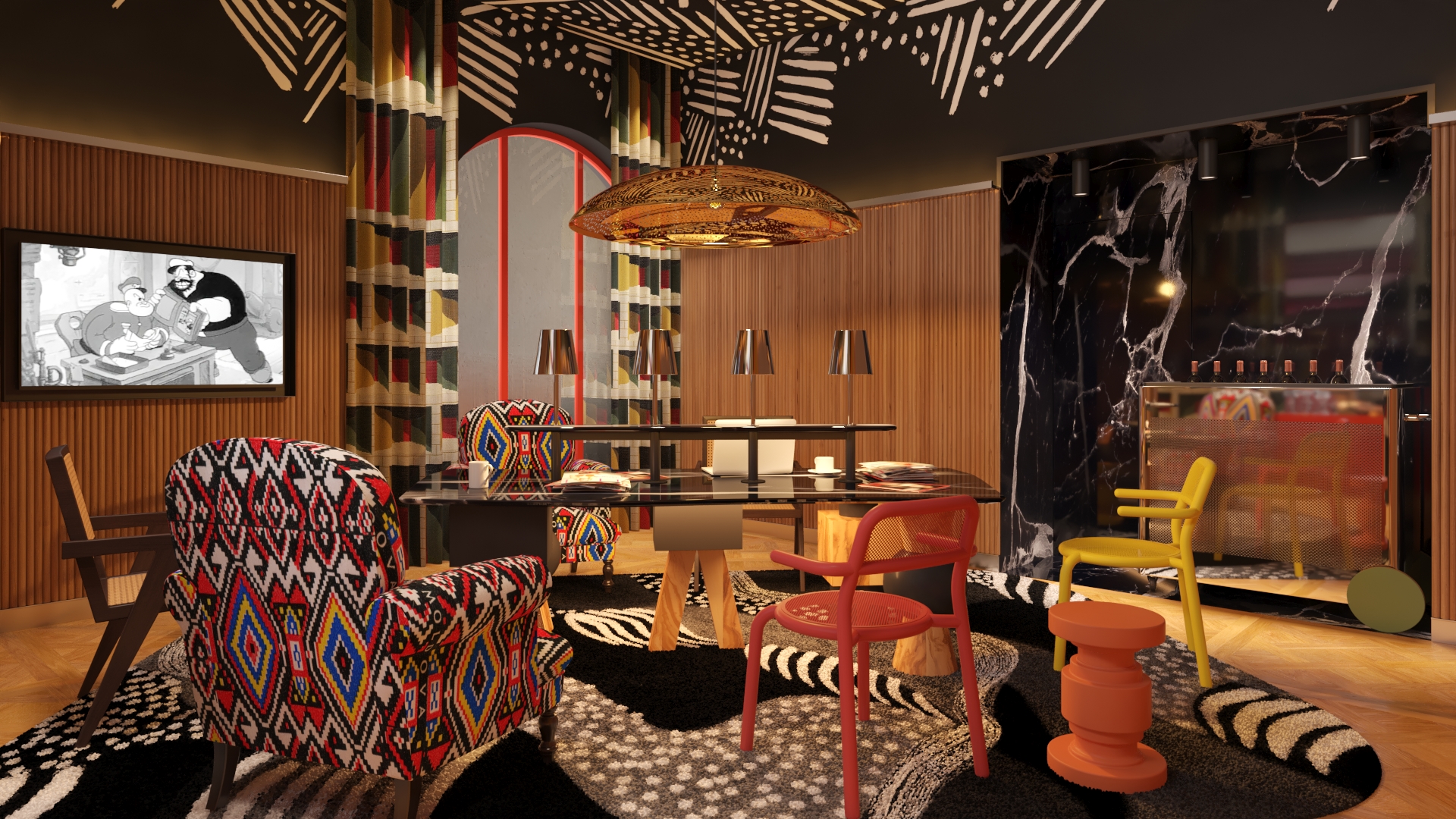 Serge Trigano, co-founder and president of the hotel group, says: “At Mama Shelter in Rennes, our teams have successfully met two challenges: to establish a contemporary hotel in a renovated historic complex, many parts of which come under the Bâtiments de France jurisdiction. We also wanted to soak up traditions in this region of Brittany, with its strong personality and highly sophisticated culture.

“We are now looking forward to sharing Mama’s festive spirit with the people of Rennes and all those who love Brittany. To invite them to experience and feel the city, in its restaurants and bars, which subtly tell its story. We’re also looking forward to welcoming fans of Mama’s in the heart and soul of Rennes.” 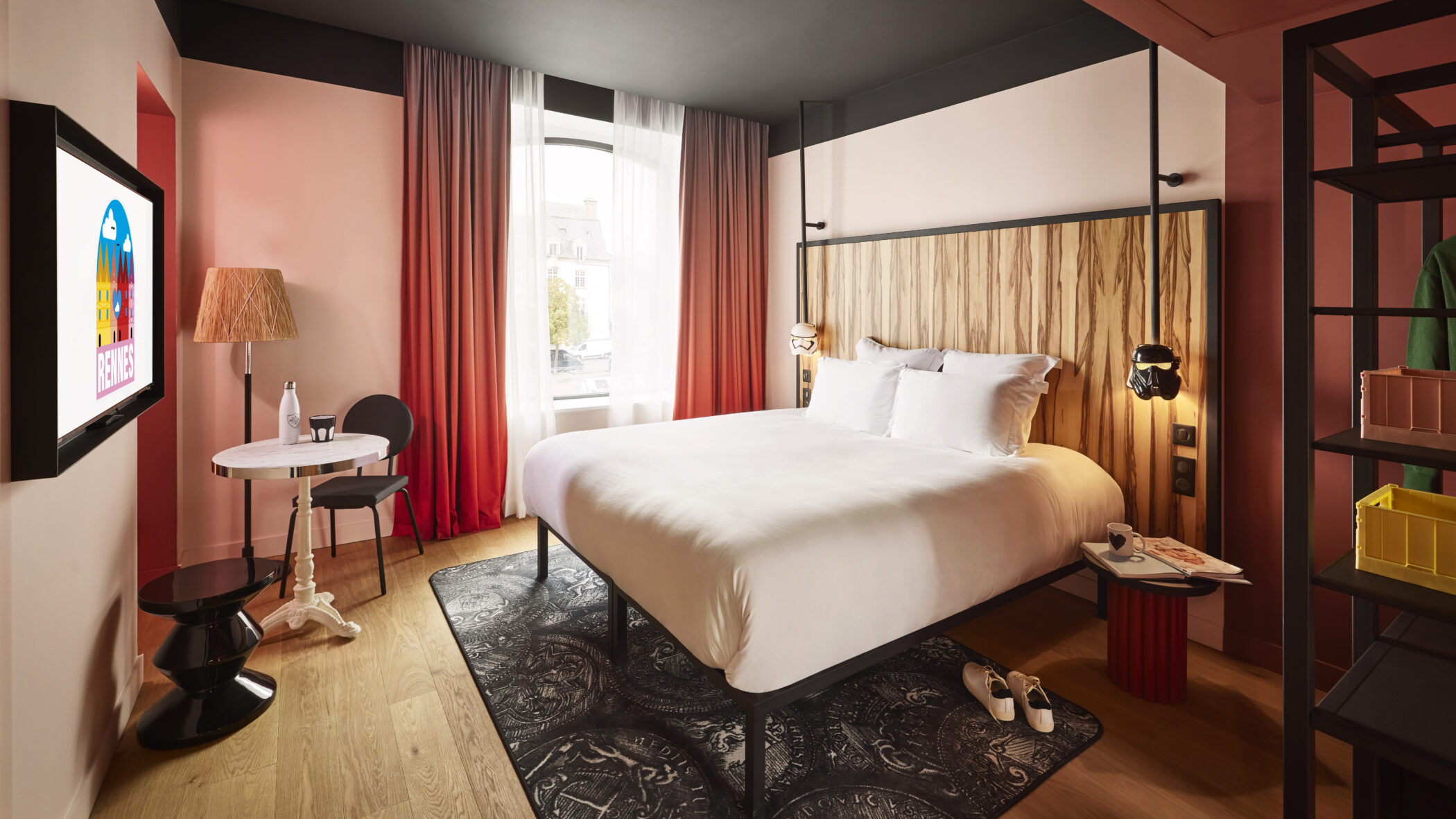 The design concept for the Rennes outpost of Mama Shelter – by Benjamin El Doghaïli, architect and head of the Mama Shelter – embraces the city’s rich heritage, and intends for the hotel to be at one with its environment.

Its 119 bedrooms vary in size and shape. Some are nestled under roofing, and many have period features such as mouldings and fireplaces. All of them have Mama Shelter’s luxury bedding, and striking bathrooms with black and white striped tiles, and organic beauty products from the Mama Skin range. A one-night stay at Mama Shelter Rennes will start from €99 for a medium room. 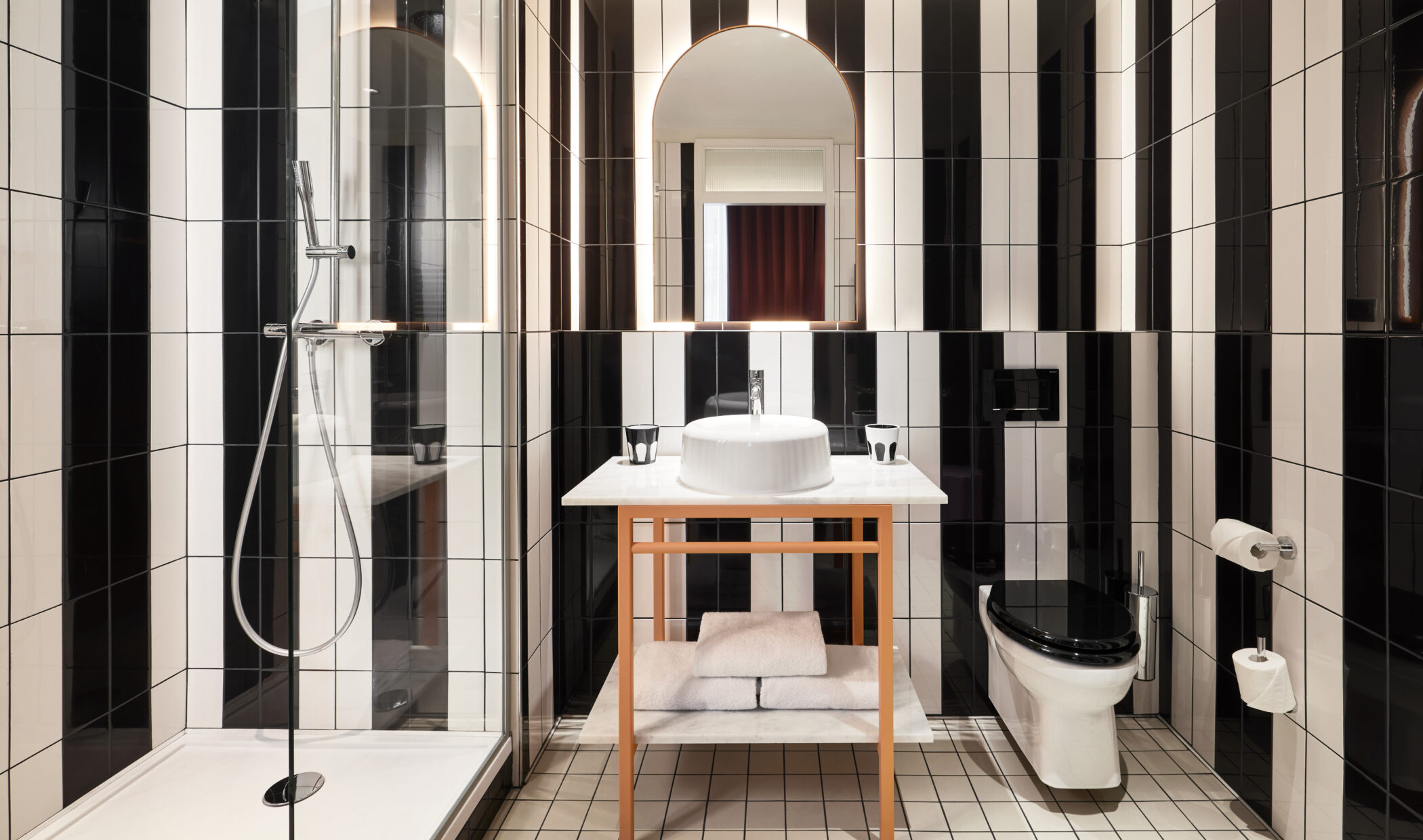 El Doghaïli has drawn on the building’s history as a former banking property where currency was minted as well as Renne’s local culture.

The lobby features a large round counter adorned in a mosaic frieze of buckwheat pancakes – a delicacy of the area – in the Odorico brothers’ style, in honour of their cultural legacy in Rennes, which is home to a large concentration of their art deco mosaics. 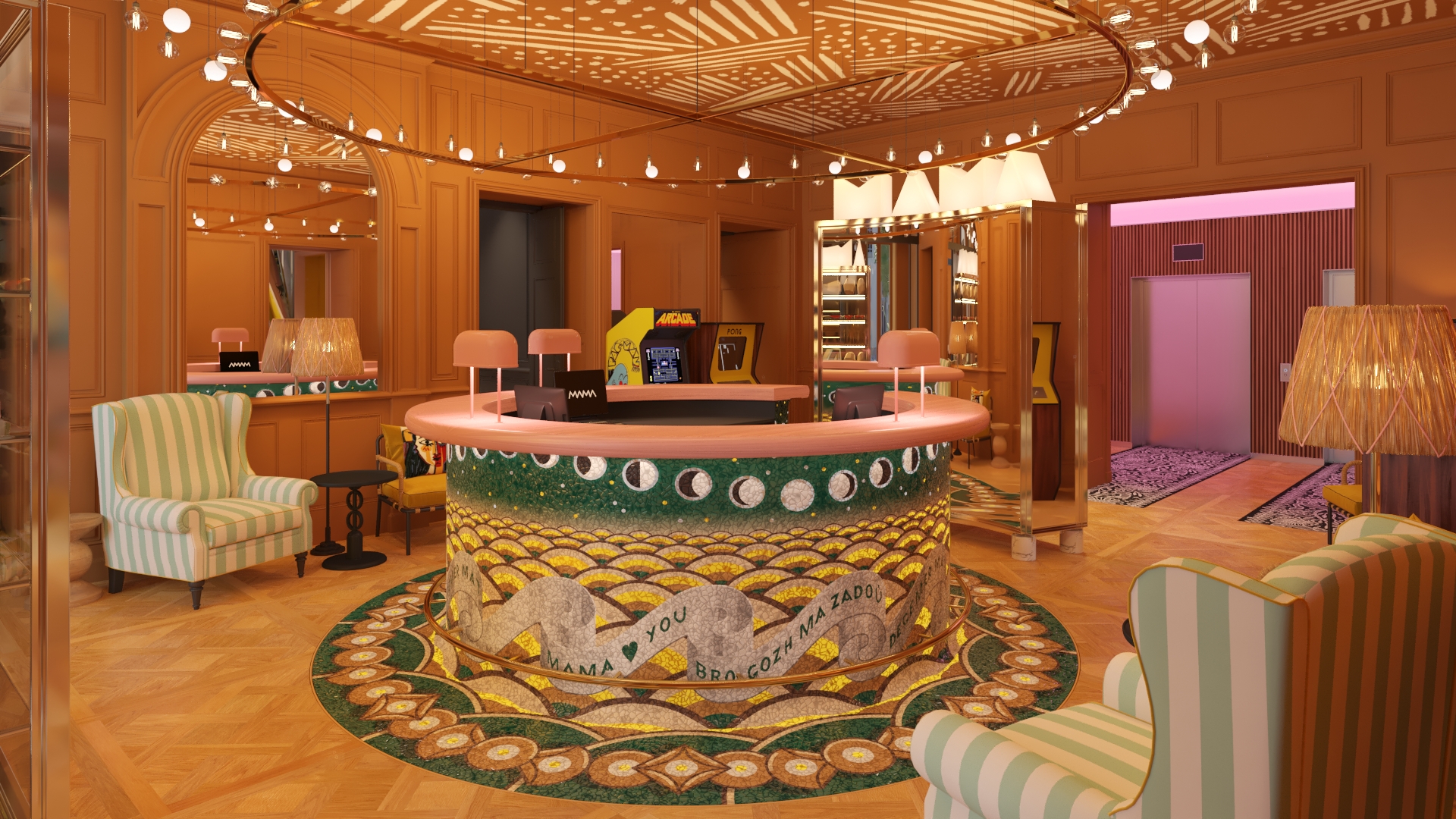 The brasserie restaurant offers views over the city, and has upholstered benches with a custom-made fabric that evoke the popular saying: “Vouloir le beurre et l’argent du beurre” (To have one’s cake and eat it, too). 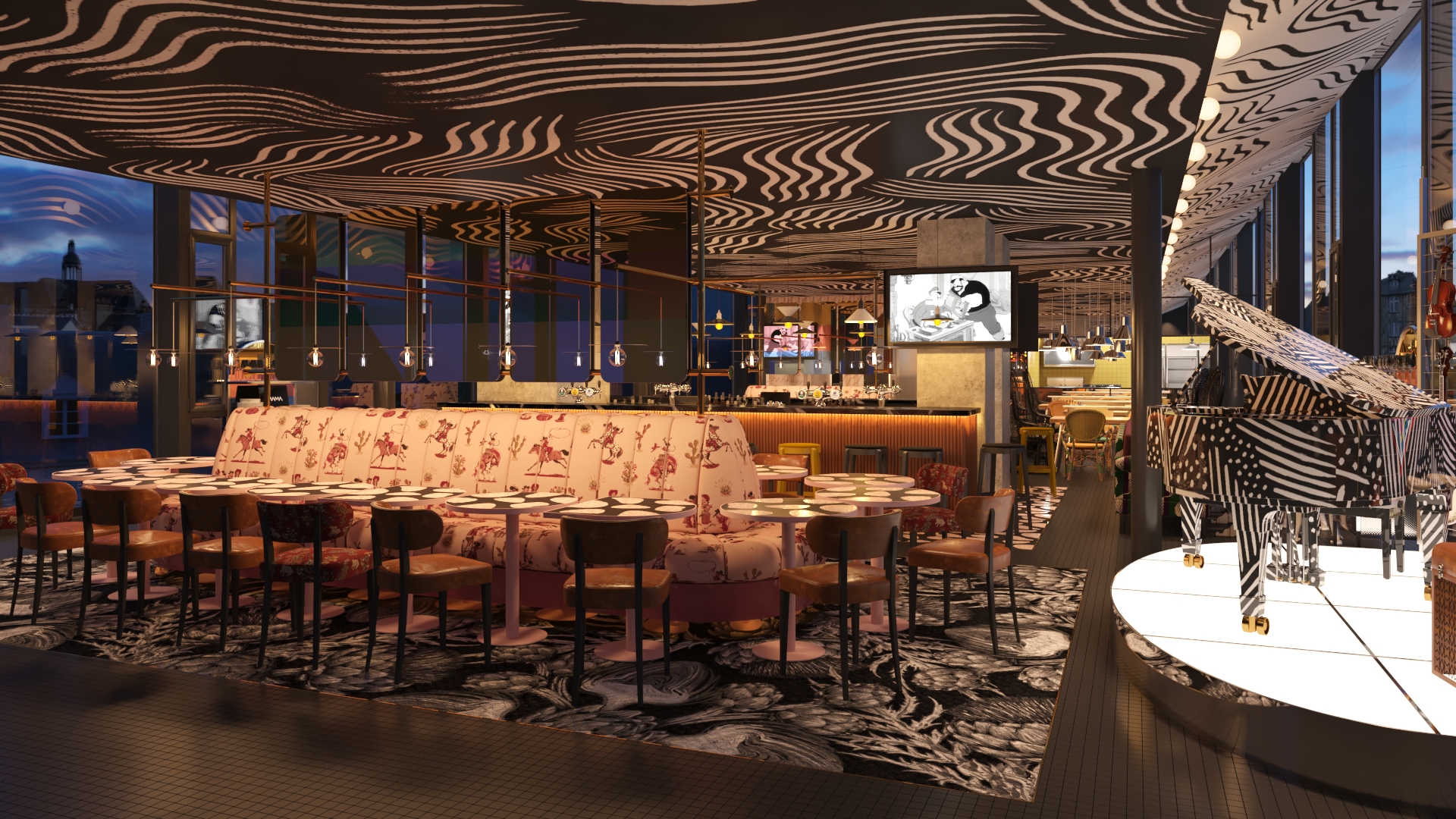 One of the hotel’s  ground floor lounges is decorated entirely in pink and embellished with lobsters, mussels, seaweed and oysters, a nod to the region’s famous seafood platters. Jumbo-sized Chinese umbrellas are reminiscent of cocktail decorations, and a reminder that the Breton people are travellers at heart.

The hotel’s rooftop provides an incredible view of the city’s 19th-century buildings, ramshackle 16th-century houses, and towers. Down in the the basement, several colourful karaoke rooms will be available to hire for groups. 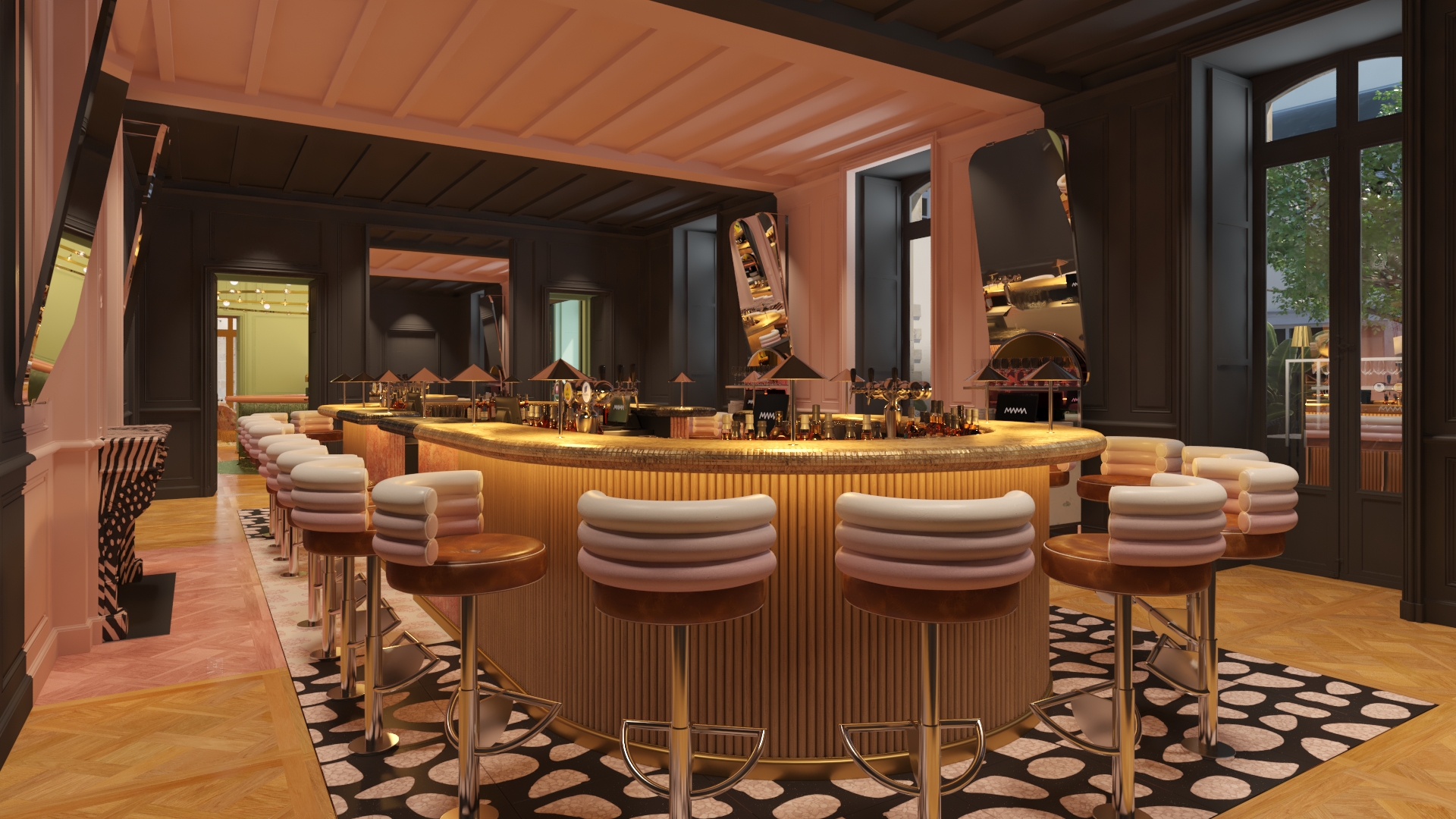 The hotel’s swimming pool has disabled access, and there’s also a hammam, a sauna and a Mama Skin Spa – the first of its kind for Mama Shelter – nestled under stone vaults. Absolution, a French organic cosmetics house, has partnered with Ho Karan, a Breton cosmetics brand renowned for its hemp-based treatments to offer a range of spa treatments.

Rennes is attracting an increasing number of visitors, as well as families who want to escape city life. The streets of its historic centre are loved for their half-timbered houses, while the Saturday morning covered market at Place de Lices is the place for experiencing the produce from the region’s market gardeners. fishmongers, cheese makers and florists. 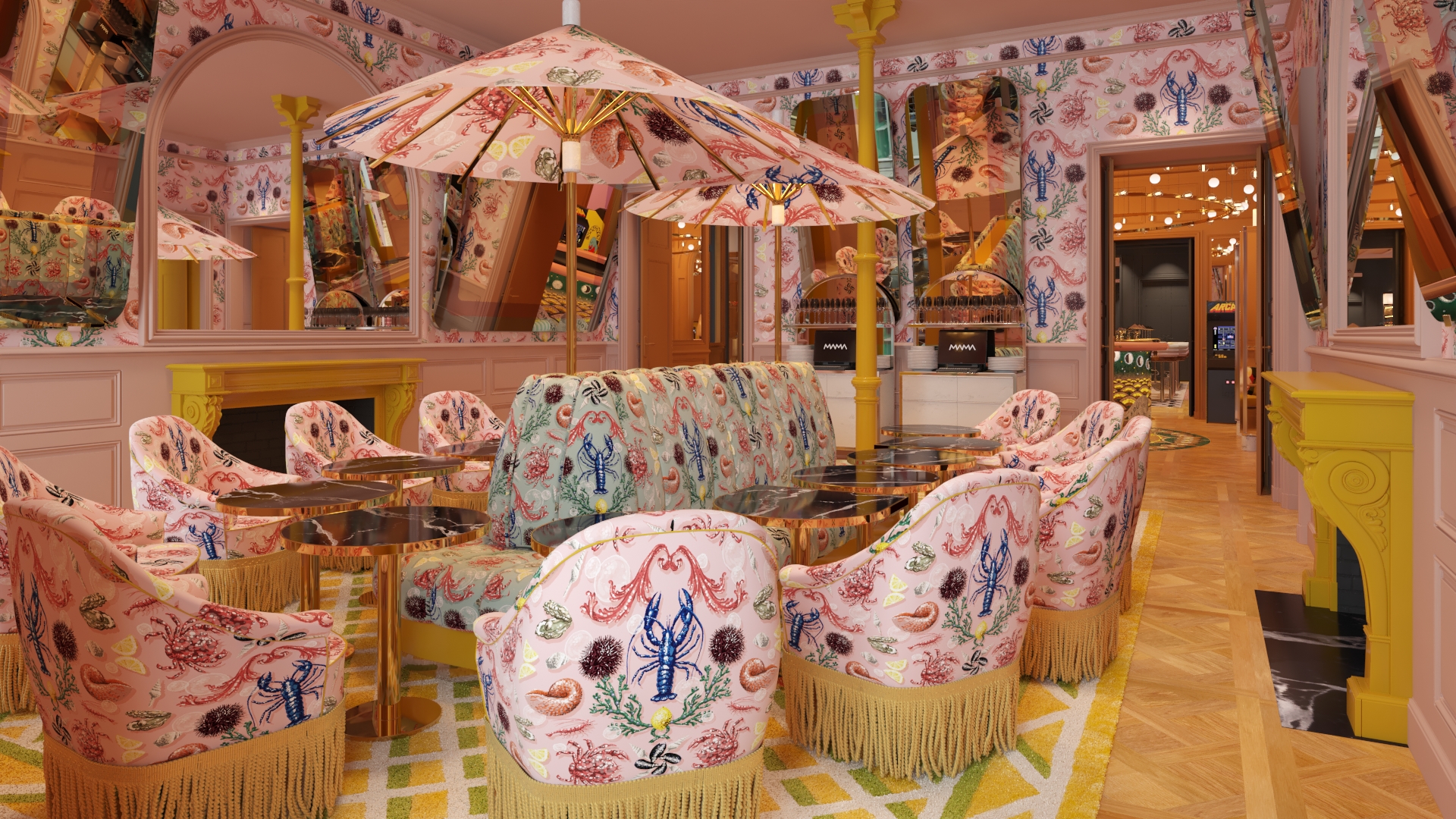 Cédric Gobilliard, managing director for Mama Shelter, says: “Living intelligently, means knowing how to live together, in social harmony. This is the motto of the city of Rennes, which also reflects Mama Shelter’s ethos.

“Mama Shelter is a unique place of economic and social vitality, breaking down codes and sharing its values of equality and freedom. Opening the first Mama in Brittany, in the centre of Rennes and in a listed building, is a testimony to the boldness of Mama Shelter’s disruptive concept and its sincere desire to unveil its brand and festive spirit to the people of Rennes and to travellers who are lovers of authenticity”. 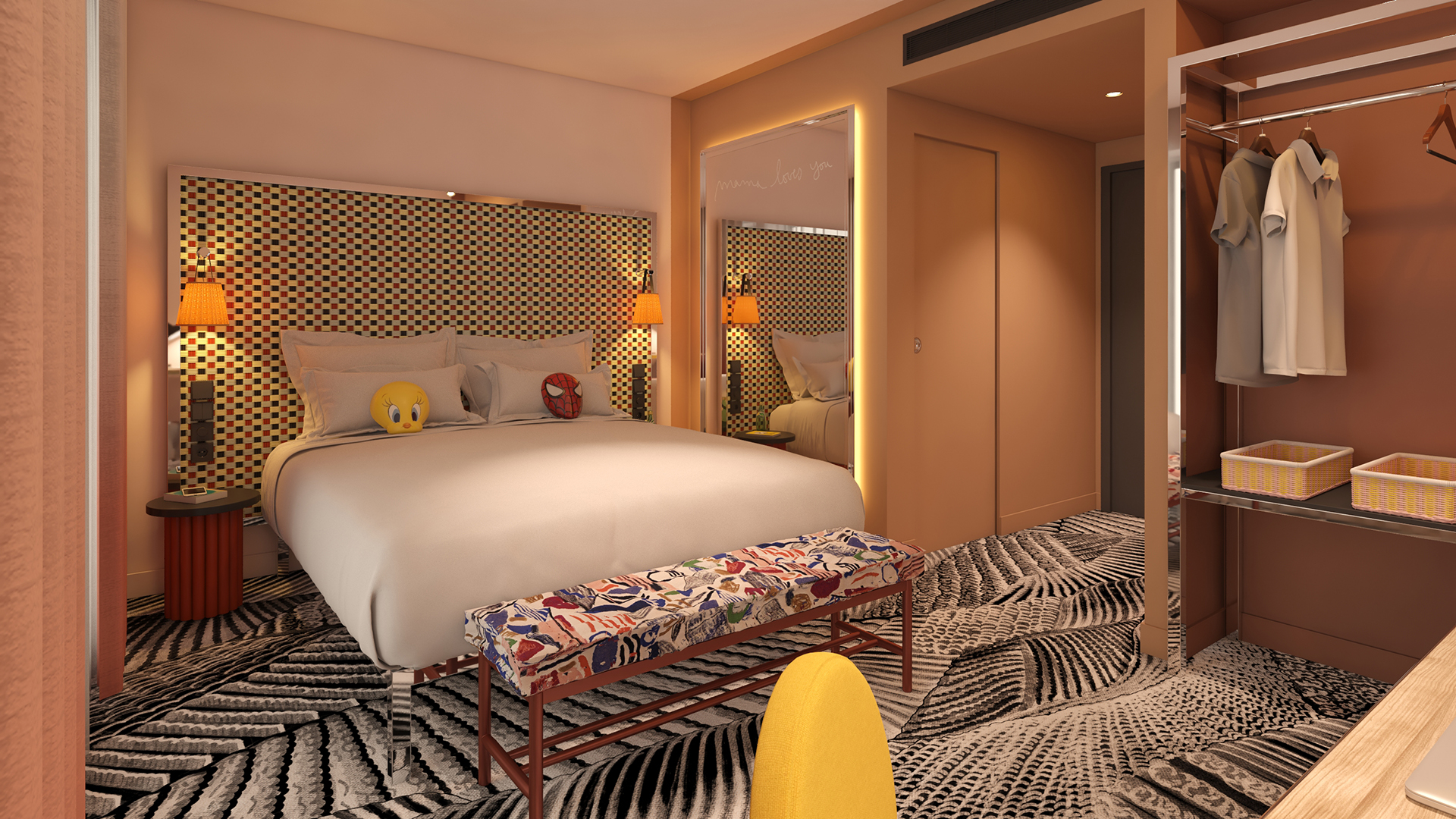 Home to 120 rooms across five floors, there will also be a restaurant serving up a typical Mama menu: a mix of local flavours and signature dishes. A highlight will be the CineMama, the hotel’s very-own private cinema and a petanque court allowing guests to enjoy memorable moments with family or friends. 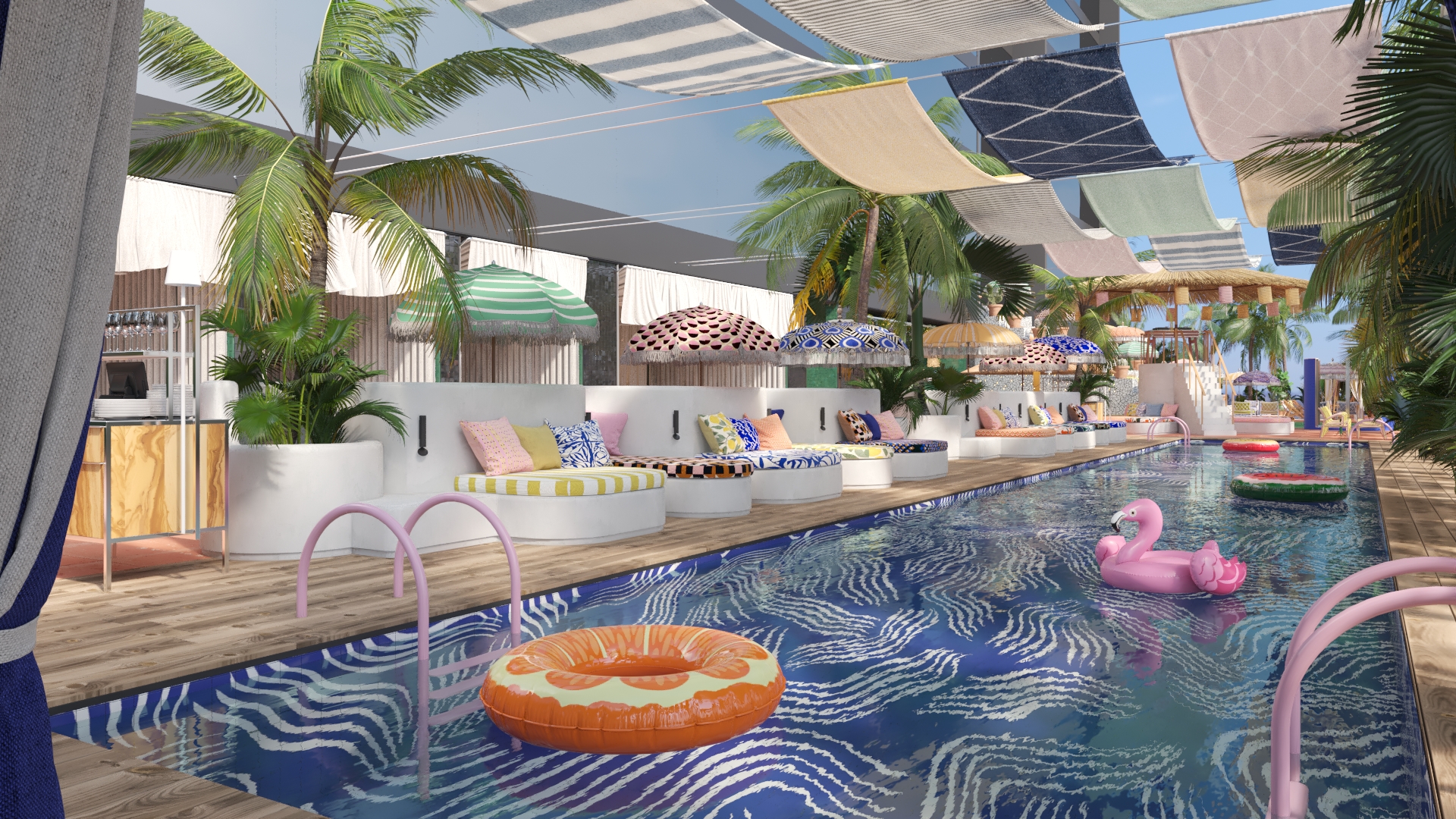 Mama Shelter is travelling to the Middle East for the first time. It will be a new offering for visitors of Dubai, with its affordable and energetic personality. It will be home to 197 rooms and 204 apartments, a range of dining outlets, a terrace with four swimming pools, an outdoor CineMama and more.

It will be a larger-than-life Mama that embodies the idea of a resort in the heart of the city, recalling the origins of the Trigano family who founded the Mama Shelter group and co-founded Club Med.

Mama Medellín will be located in the heart of the El Poblado district. The first Colombian Mama will have 150 rooms, a restaurant, a bar, more than 3,000 sqm of coworking space, 500 sqm of meeting rooms, and a swimming pool located on the first floor of the rooftop. 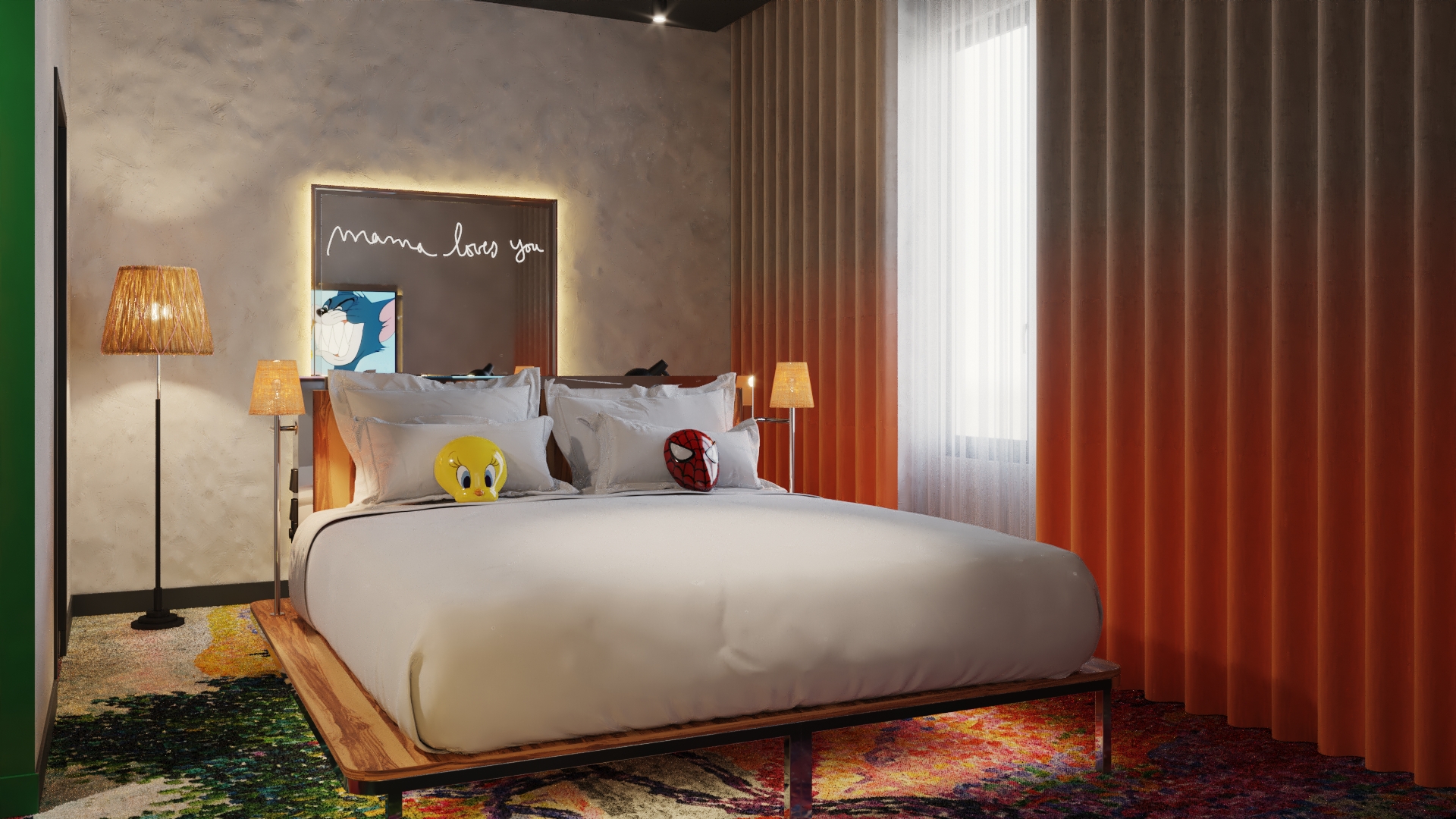 Mama Shelter will head to the French Riviera for the opening of Mama Shelter Nice, which will be located only 600 metres from the city’s mythical Old Port, in the central district of Riquier. The property will be connected to the rest of the city by tram and train and which has many local shops, and will have 102 colourful rooms. 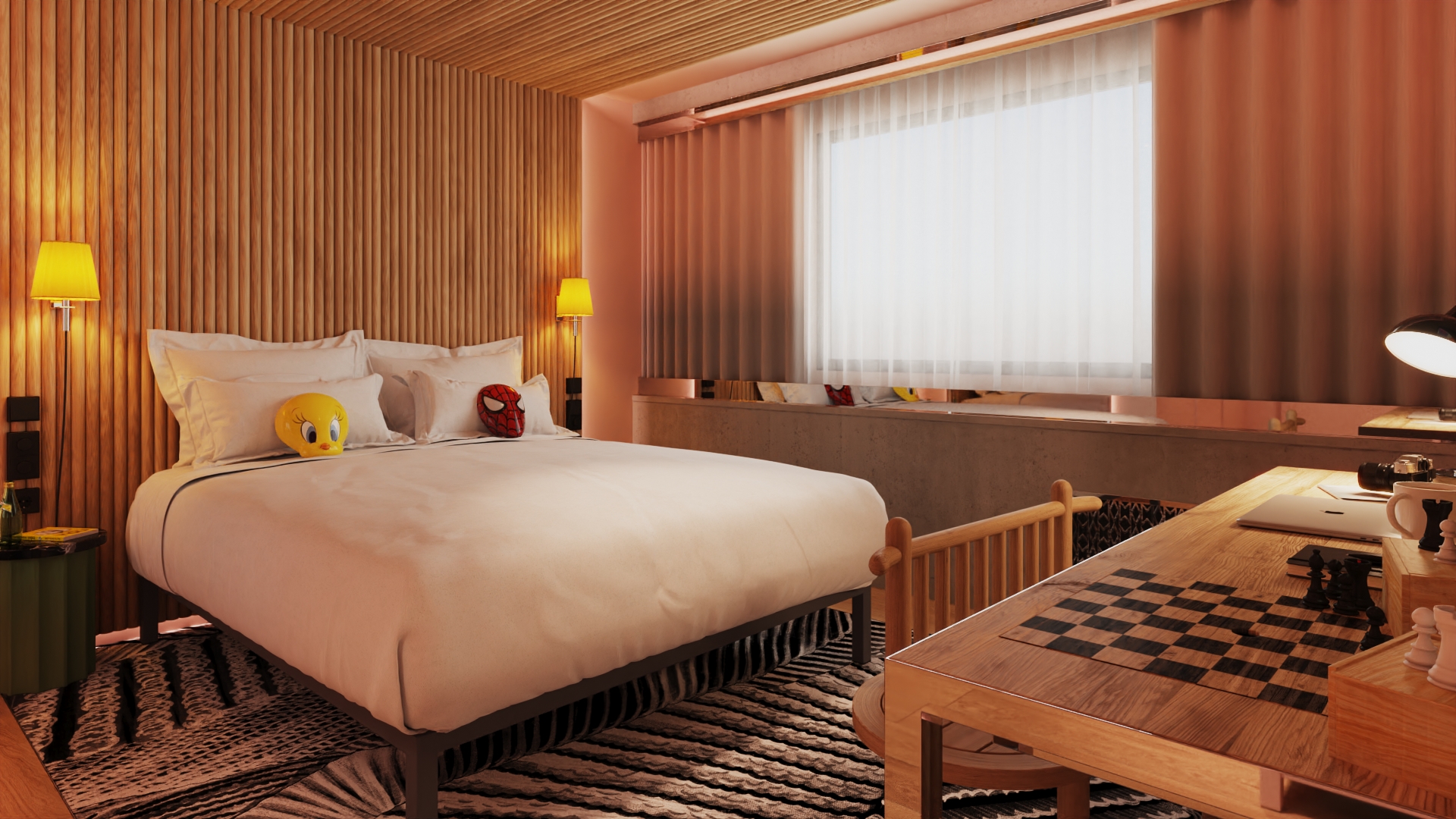 Mama Shelter will open for the first time in Switzerland with the forthcoming property Mama Zurich. With 178 stylish and design rooms, it will be located in the lively shopping district of Oerlikon known for the Hallenstadion, where concerts and major sporting events take place, the Messe Zürich exhibition centre and the Theatre 11 Zürich, known for hosting Broadway shows.