The Ned Doha hotel-club to open in Qatar

A spin-off of the Soho House concept in London, the Seventies-inspired Ned Doha brings hotel rooms, the Electric Diner and members-only hideouts to the Qatari capital. Rose Dykins reports

The Ned Doha is set to open its doors in November 2022 in time for when Qatar welcomes football fans for the FIFA World Cup.

An outpost of the Ned members’ club in London, the Ned Doha will occupy Qatar’s former Ministry of the Interior building, set along the Corniche waterfront. The property will offer views over the Persian Sea, city parklands and the neighbouring Doha Palace.

The building was originally designed by acclaimed Lebanese architect William Sednaoui in the 1960s. Now, the 46,451 sqm site now will be reimagined to offer a members club with 90 bedrooms and 12 suites and seven restaurants, plus a health club with spa, gym, 30-metre outdoor pool and event space. 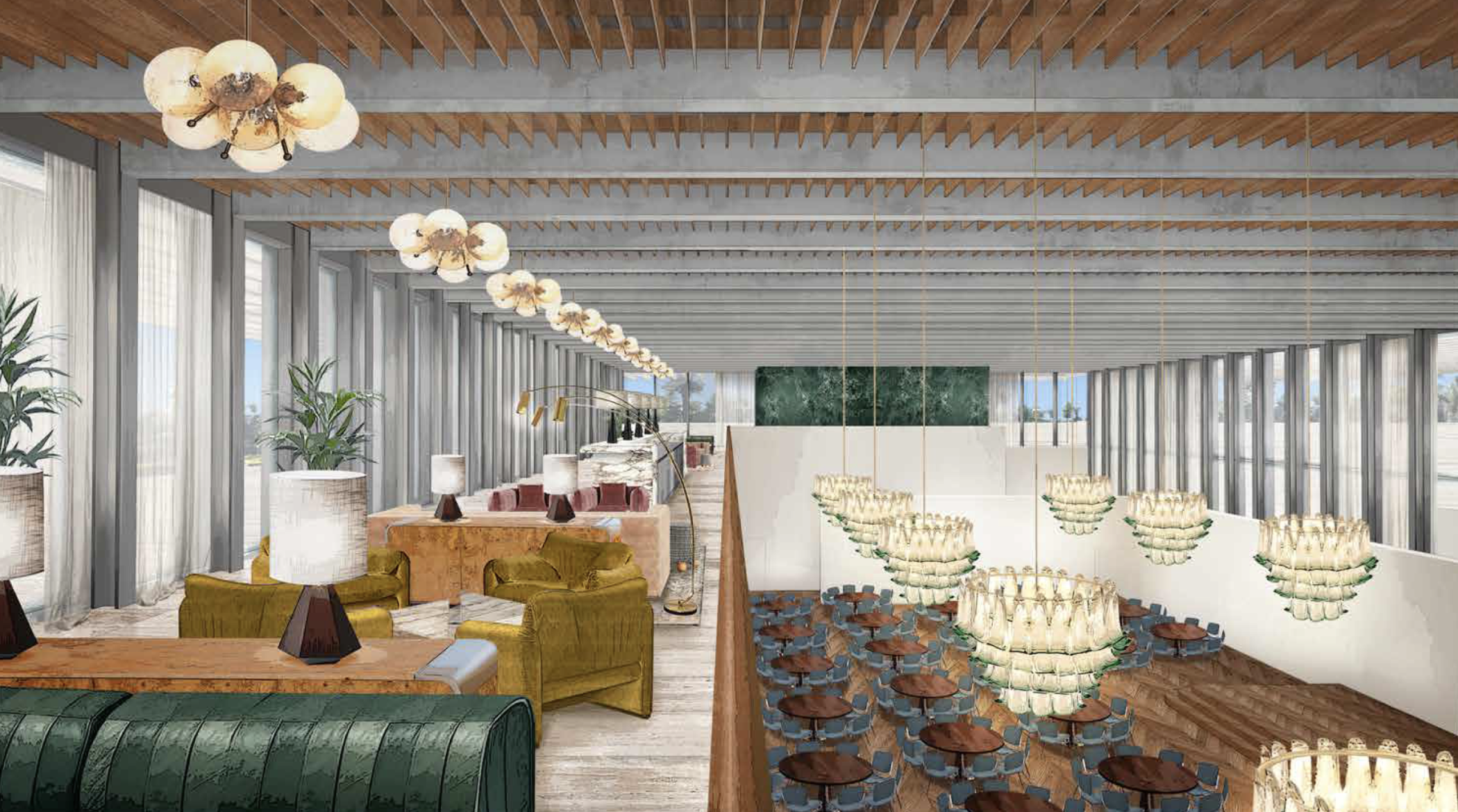 The Ned Doha is set over five floors with architecture by David Chipperfield Architects and interiors by Soho House Design. The team used The Ned London as their inspiration to create a ground floor atrium with a live performance stage at its heart, surrounded by restaurants.

References to the original Ned were incorporated into the design, including the green Tinos marble has used throughout the ground floor areas. 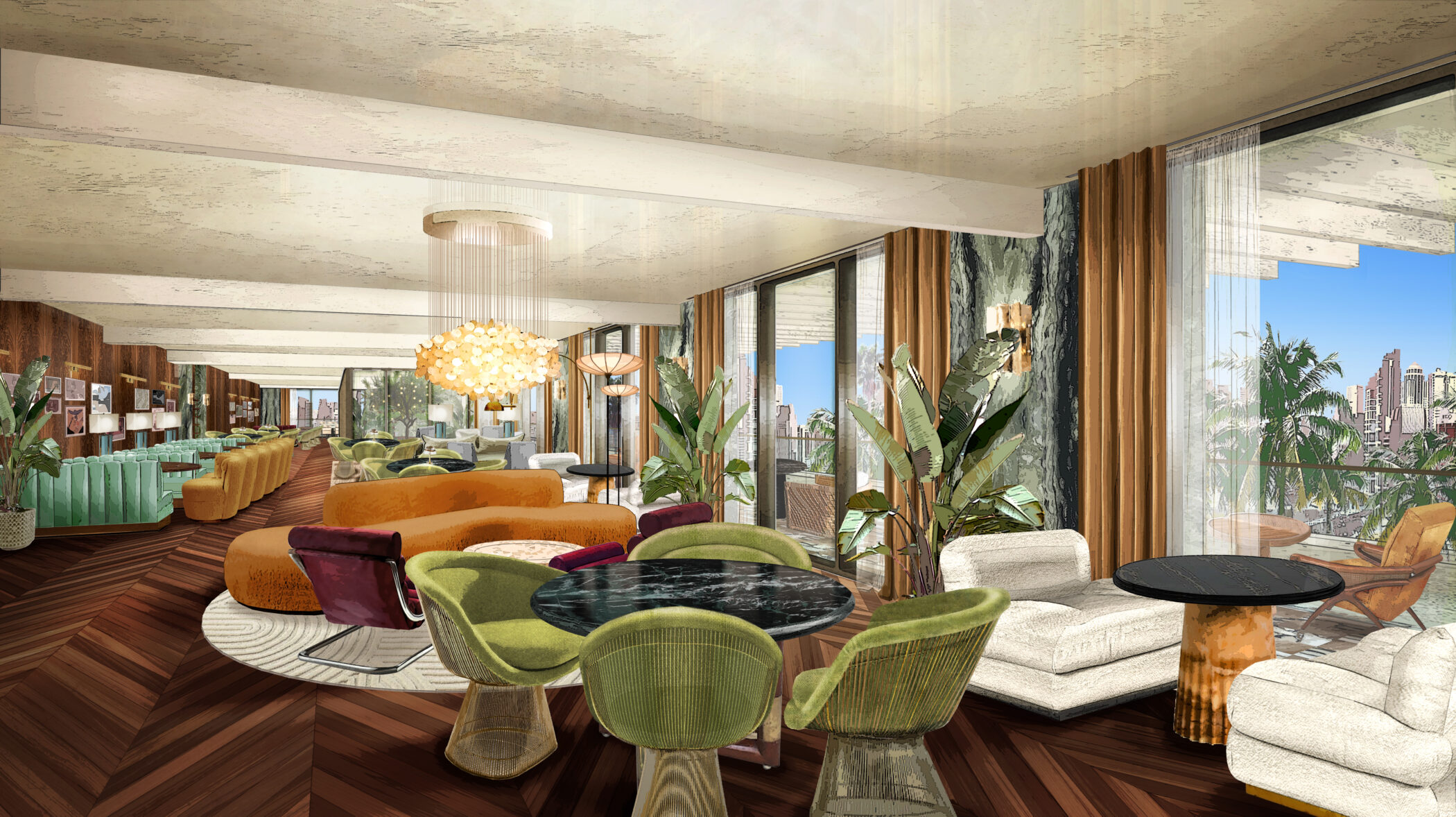 Outside the property, an oasis-in-the-city garden has been created, with water features, space for contemporary sculptures and a pergola design to provide shade.

Ned’s Club members will have access to Millie’s on the ground floor, as well as a balcony level for a bird’s eye view of stage performances.

Meanwhile, on the rooftop, the members-only Ned’s Club Upstairs is a beacon of 1970s glamour, with a warm wood palette, touches of gold, statement furniture, silk rugs and modern lighting.

It has a stage for live music and entertainment, an international menu serving Ned’s Club classics and views overlooking Doha’s West Bay and the Diwan (government office). 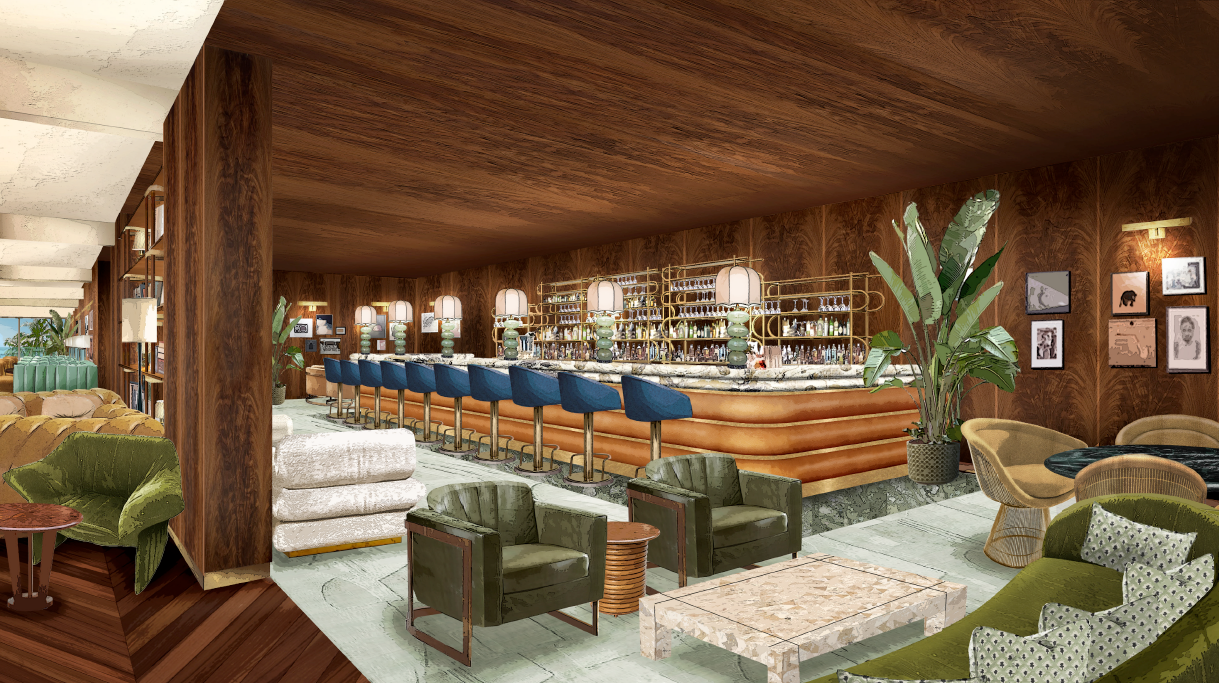 Members can also make use of Ned’s Club spa and gym on the top floor with panoramic views of the city and an extensive treatment list. The Health Club has a gym and studio space with state-of-the-art equipment, a range of exercise classes, individual steam rooms, saunas and a traditional hammam. 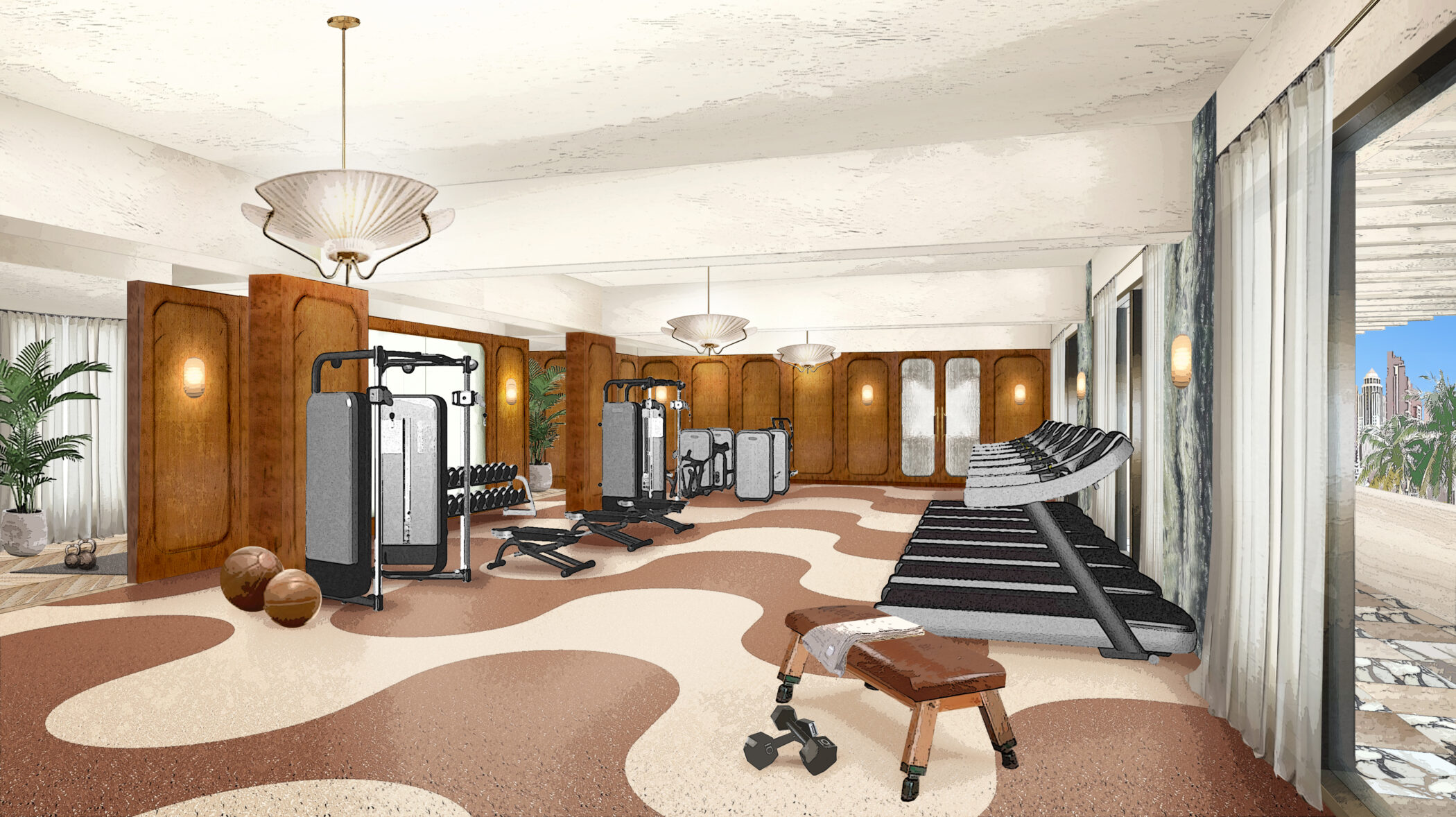 Also on the ground floor, the Ned Doha’s restaurants encircle a stage hosting daily performances. Outposts of Cecconi’s, Kaia, Nickel Lounge and the Electric Diner will be open to the public, and sit alongside members-only Millie’s, an international brasserie serving both classic and contemporary fare.

Malibu Kitchen is a Californian inspired, air-conditioned, outdoor restaurant open all year around, serving dishes such as sea bream tacos, courgette flatbreads and specialties from the grill.

The property’s 90-room hotel include 12 suites, all of which have outdoor balconies and connecting rooms, mirrored headboards and walk-in wardrobes. 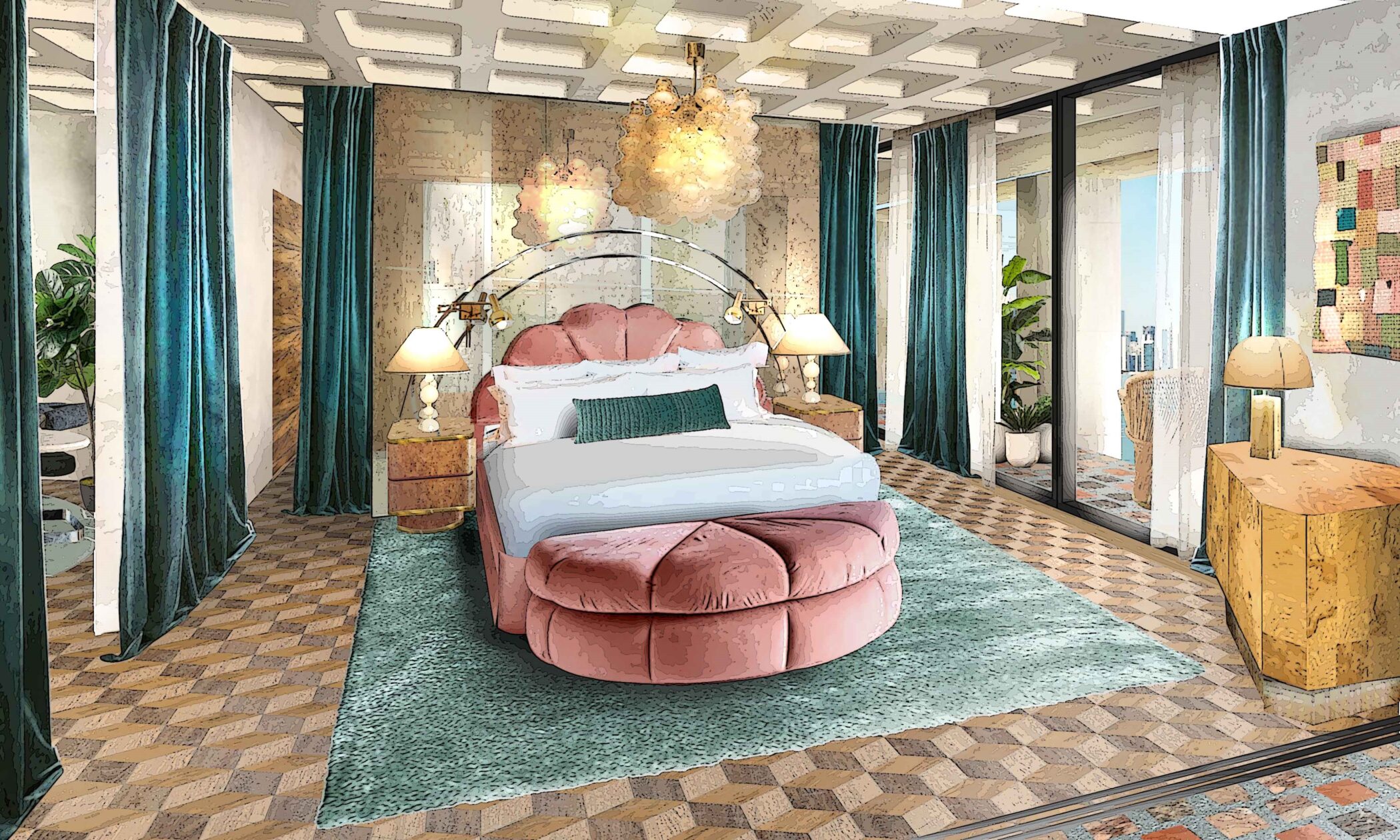 The décor of the bedrooms channels a glamorous 1970s design, with silk drapes, plush velvet woven fabric headboards and marble furniture.  In many of the rooms, the original coffered concrete ceilings have been retained and restored.

A highlight of the Ned Doha is its 1970s inspired pool area with private cabanas overlooking a bold green 30-metre pool, terrazzo flooring and green and white striped daybeds. The space is for members and hotel residents only. 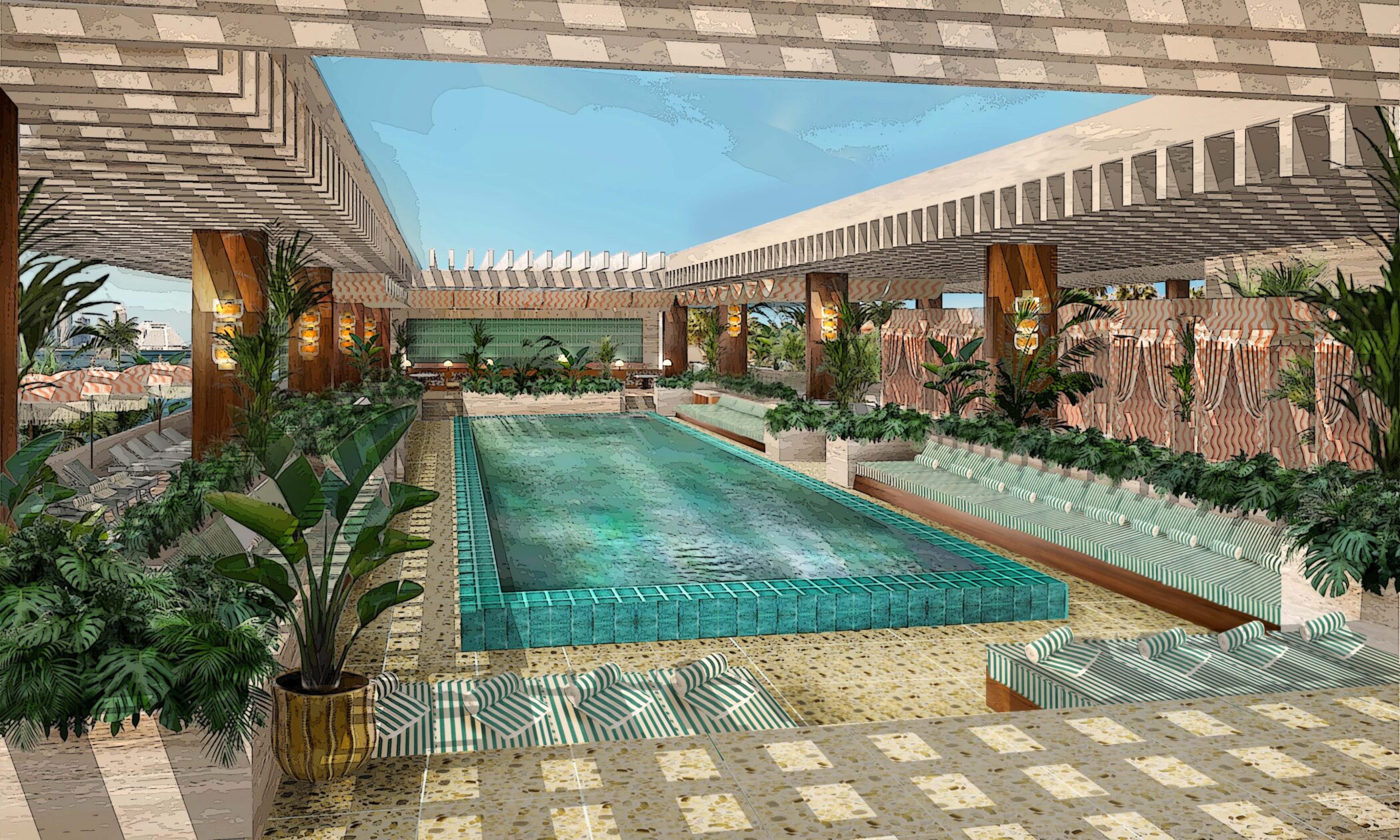 This Corniche Hall at the Ned Doha is an event space with its own private entrance. It can host conferences, events and standing receptions for up to 600 people. The space has natural daylight and is arranged around a landscaped courtyard, which also provides additional outdoor event space.

The collection explores themes such as identity, history, culture, globalisation and ecology –  issues and ideas that drive the work of contemporary artists in Doha and the Arab region.