The highly anticipated Aman New York is set to welcome its first guests in August 2022. A restoration of Manhattan’s Crown Building, the hotel is the second Aman property to launch in an urban setting (following the Aman Tokyo), creating a calm oasis within a metropolis.

Offering 83 suites and 22 branded residences, the Aman New York is situated on the corner of 57th Street and Fifth Avenue. Built in 1921, the Crown Building was designed by Warren & Wetmore, architects of some of New York’s Grand Central Station and the Helmsley Building.

The monument has undergone a significant redevelopment to become the Aman New York, with its original architecture fused with Aman’s design touchpoints to create a tranquil escape in the heart of the city. 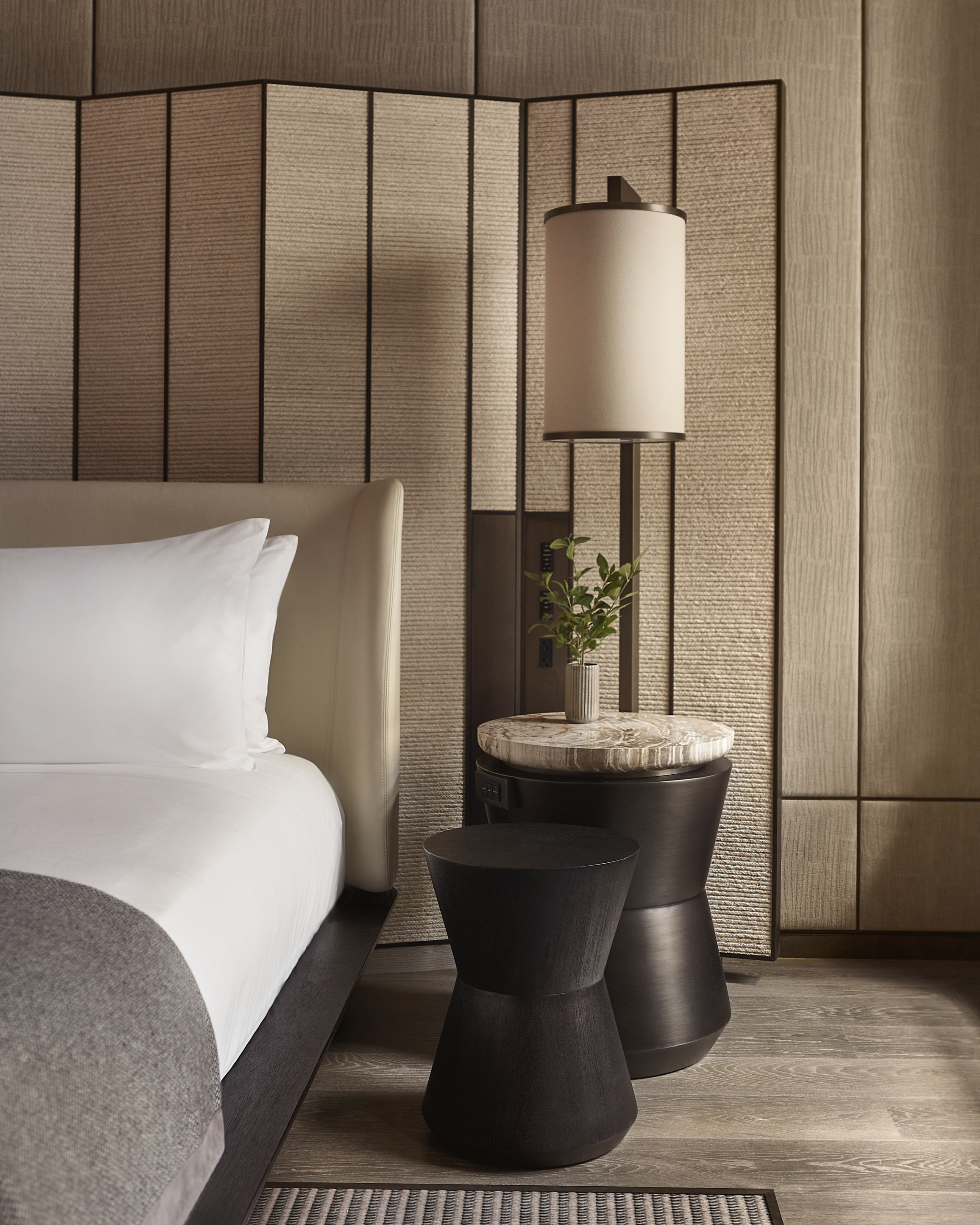 Guests arrive at the Aman New York and ascend to the hotel’s 14th floor to a grand double-height atrium and space for socialising designed by Jean Michel Gathy of Denniston, whose aim was to instil a sense of the city.

The hotel’s 83 suites are among New York’s largest – starting from 750 square feet – and are inspired Aman’s signature airy, peaceful style, evoking a sense of harmony through the use of organic, natural materials and muted tones.

Every suite offers a functioning fireplace – a first in New York City – while bathrooms are opulent and oversized with oval soaking bathtubs, marble rain showers and double vanities. 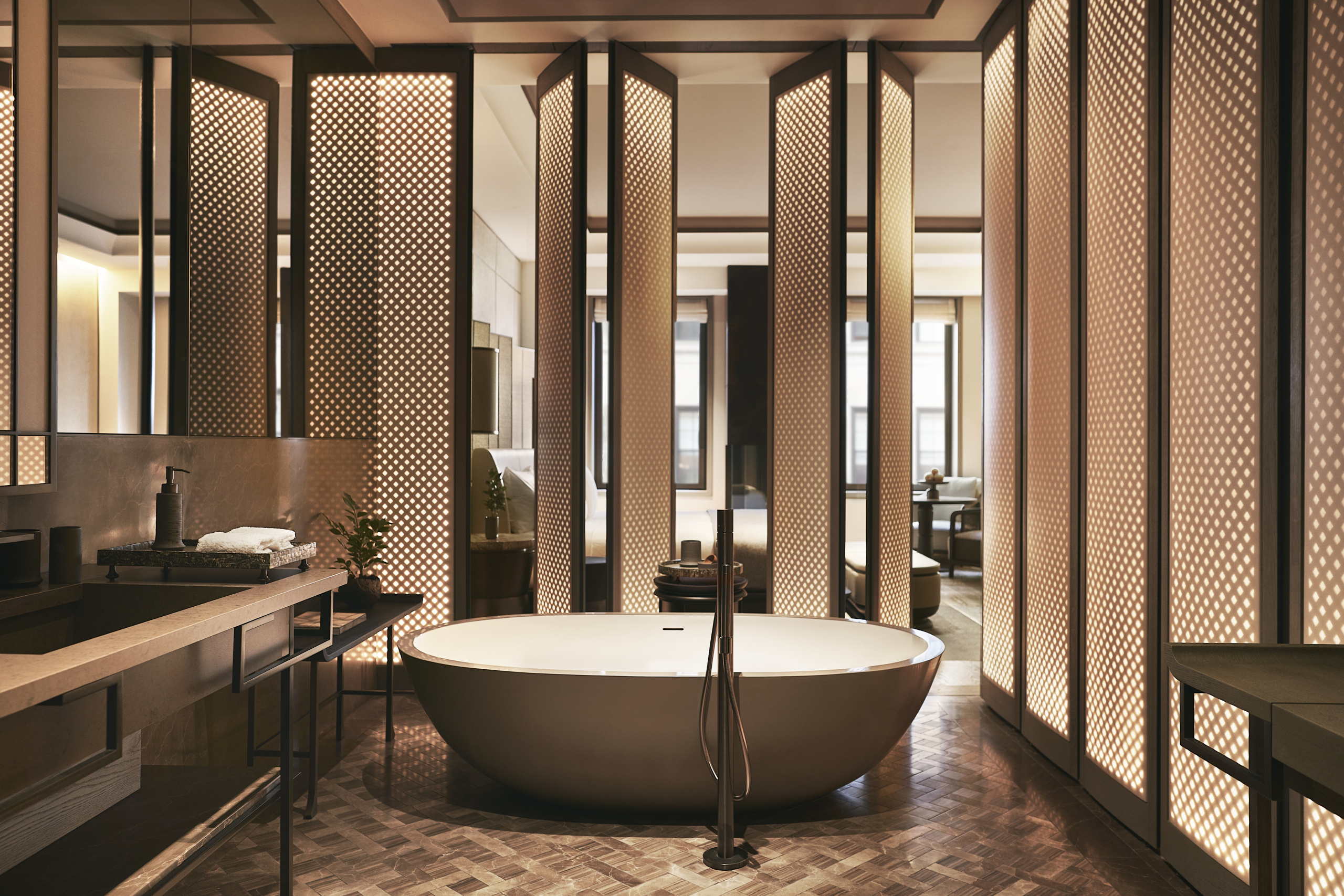 On the hotel’s 11th and 12th floors, 11 Grand Suites can be configured with extra bedrooms to create family-sized spaces. Meanwhile, two Aman Suites offer views of 57th Street and Fifth Avenue, and have living and dining areas, kitchenettes with counter seating and sizeable walk-in wardrobes. 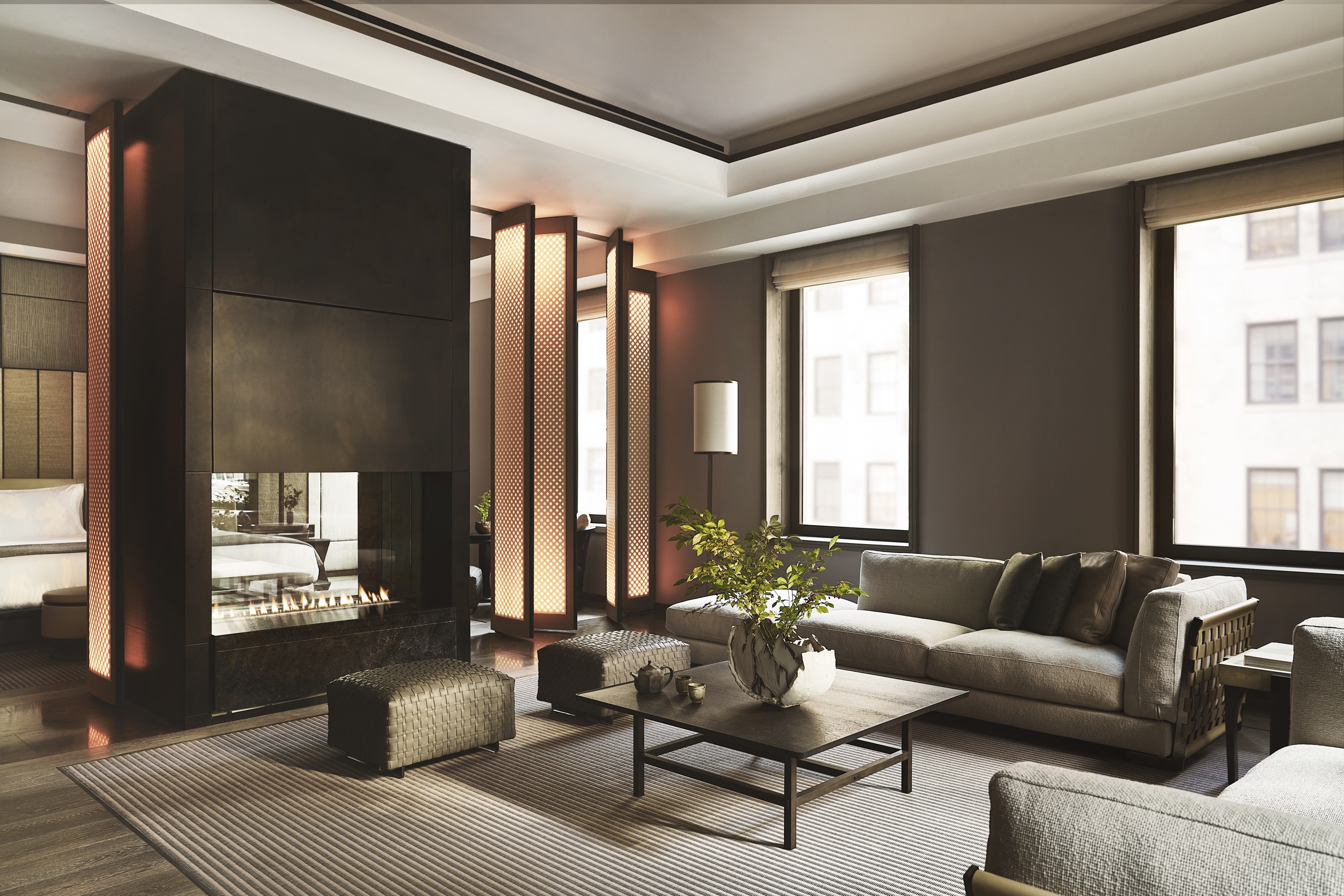 Each suite also pays homage to Aman’s roots with a large-scale mural by contemporary Japanese artist Ryoko Adachi, inspired by the 15th-century masterpiece “Pine Trees” (Shōrin-zu byōbu) by Hasegawa Tōhaku, one of Japan’s most celebrated artworks.

Adachi’s recreation of the piece captures its pre-Edo influence, and is printed on delicate rice paper, creating a captivating focal point for each suite. 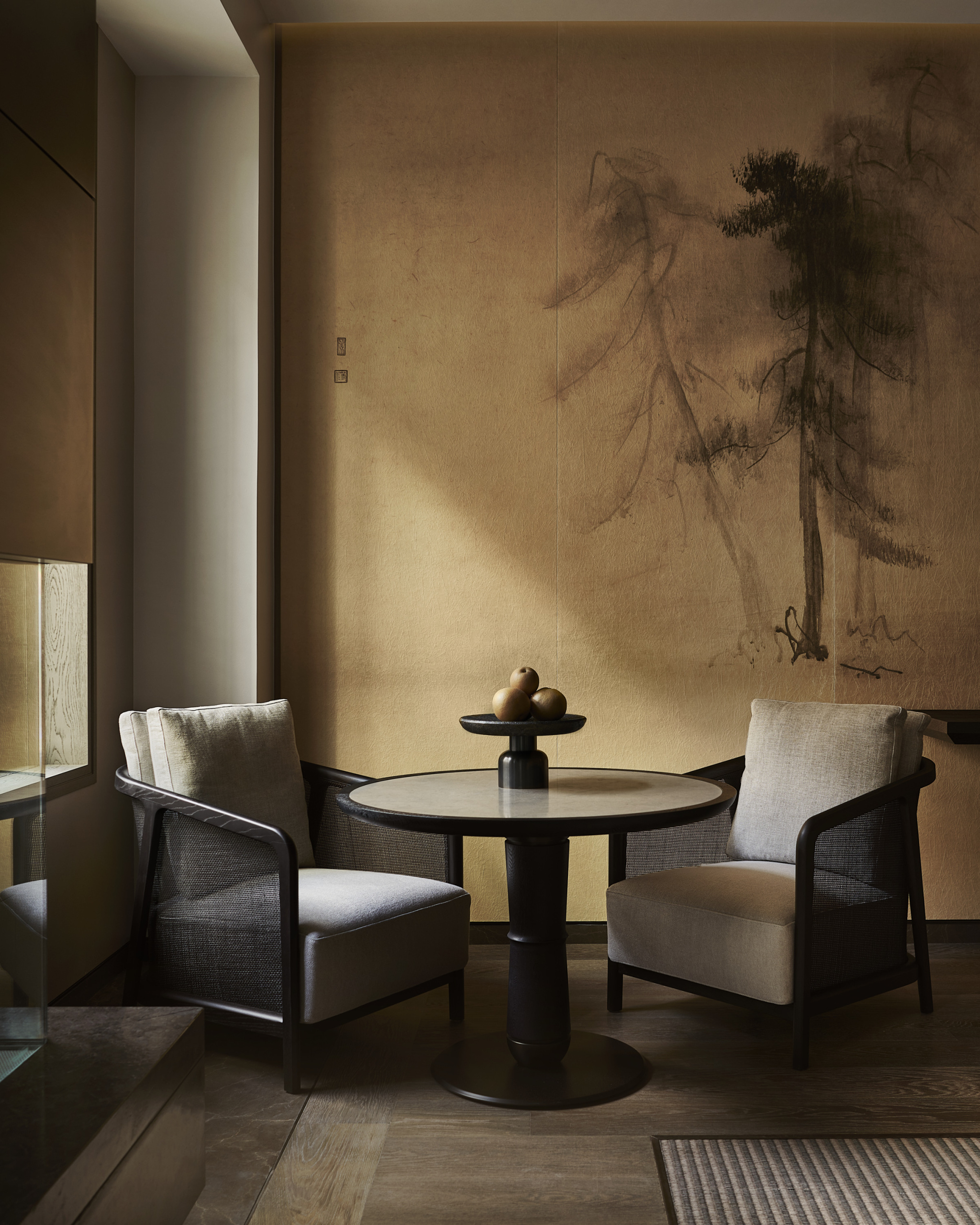 The property also has a wine library – which links to its restaurants via a leafy wraparound 650 sqm garden terrace with reflective pools, fire pits and a retractable glass roof, which allows for year-round use. Meanwhile, Aman New York’s Jazz Club will host world-class live performances as a nightly gathering place.

A highlight of Aman New York is its flagship 2,300 sqm Aman Spa, which occupies three floors. Bringing a comprehensive outpost of Aman’s wellness philosophy to the western hemisphere for the first time, the spa has a central  20-metre indoor swimming pool flanked by fire pits and daybeds and warmly lit by copper light installations.

There are two large spa houses with double treatment rooms, Banya and Hammam rooms, and private outdoor terraces with hot and cold plunge pools, daybeds and fireplaces. Available for exclusive hire the spa houses are comparable to those of Aman’s remotest retreats. 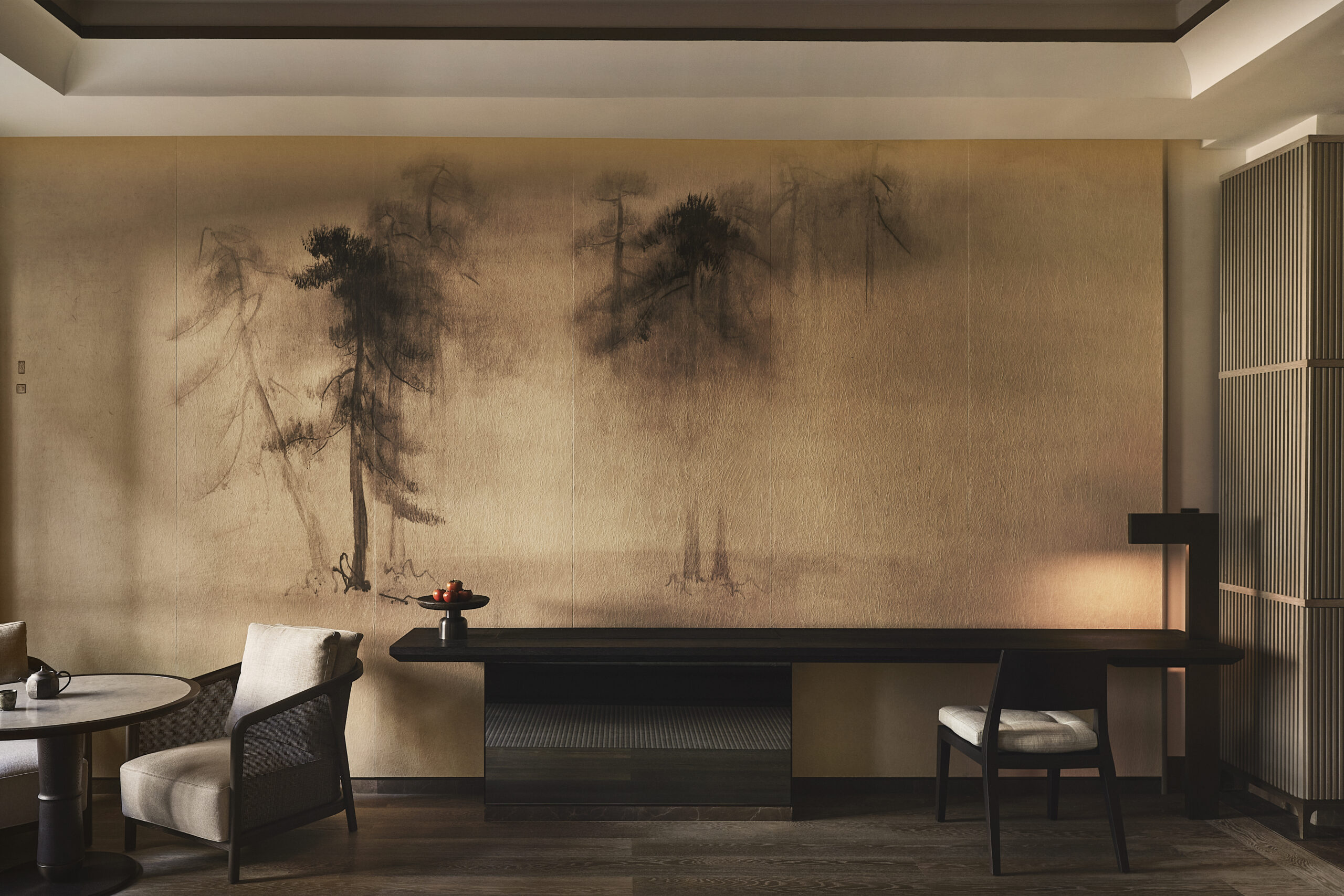 Vlad Doronin, chairman and CEO of Aman says: “Following the success of the multi-award-winning Aman Tokyo, our strategy to bring the coveted Aman lifestyle to urban destinations continues apace. A milestone opening, Aman New York marks our greatest investment into a single destination to date.

“The hotel introduces an entirely new concept to the city through expansive and unmatched amenities, which propels the brand forward, delivering a guest experience like no other.”

Aman New York joins Amangani in Wyoming and Amangiri in Utah as the brand’s third destination in the US. Aman Miami Beach is set to launch in 2024.