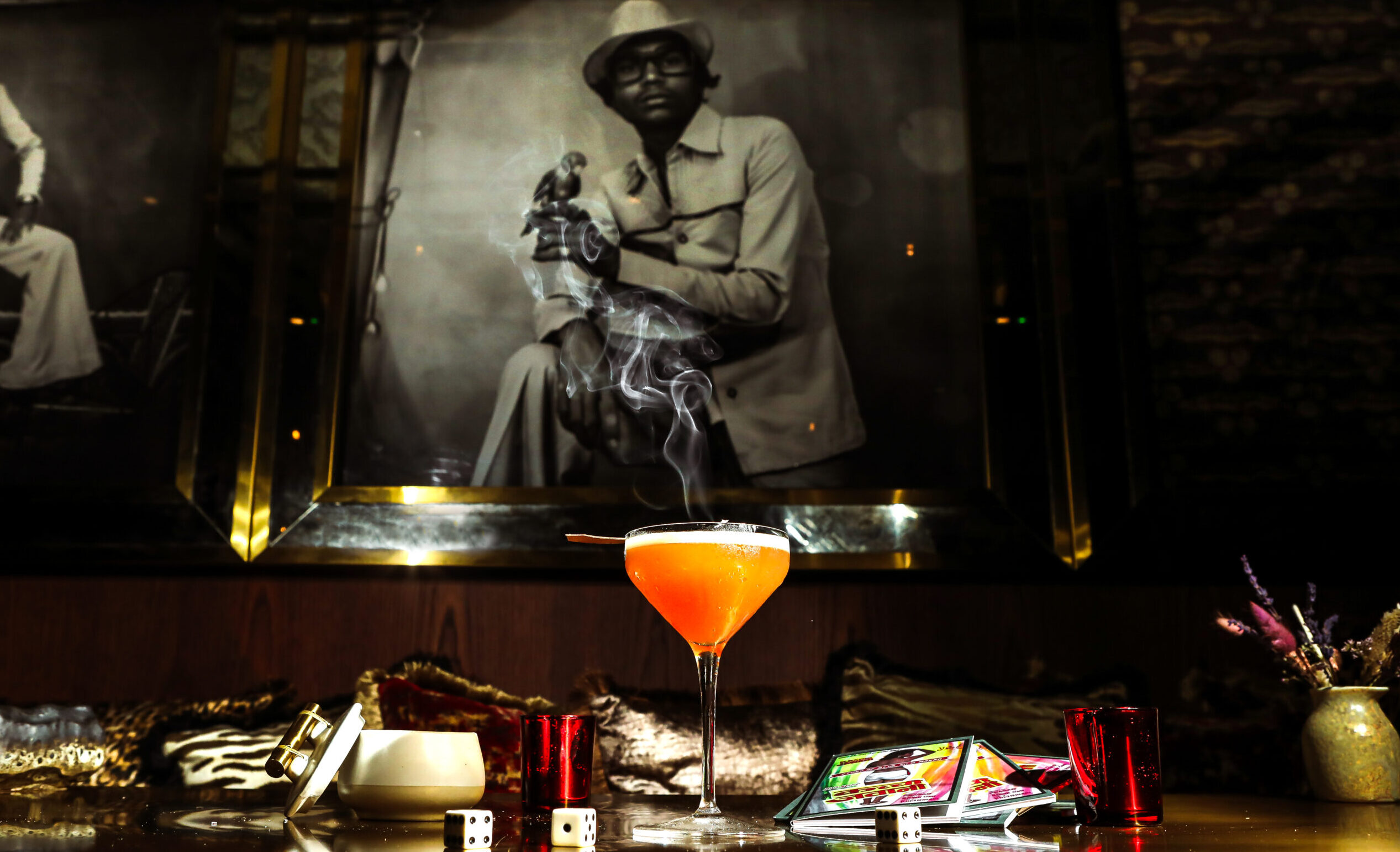 Opened in July 2021, Bandra Bhai is located down a flight of stairs at the back of Pali Hill restaurant in London’s Fitzrovia. It is curiously described as “a stylish homage to risqué, retro 1970s India and its old smuggling dens”. Globetrender was intrigued so booked a table at both the bar and the restaurant for a meal afterwards.

Perusing the cocktail menu, we learnt: “Until the early 90s, India was a closed economy. Limited items were available to buy and imported goods were scarce. This created a thriving black market and a ring of ‘smugglers’ who could get you everything from exotic malt whisky and gold watches to Japanese televisions. Often there were fronts for these dodgy dealings, sometimes posing as a photo studio or even sexologists. Bandra Bhai is our tongue in cheek tribute to smuggler’s all cash operation back in the day.” 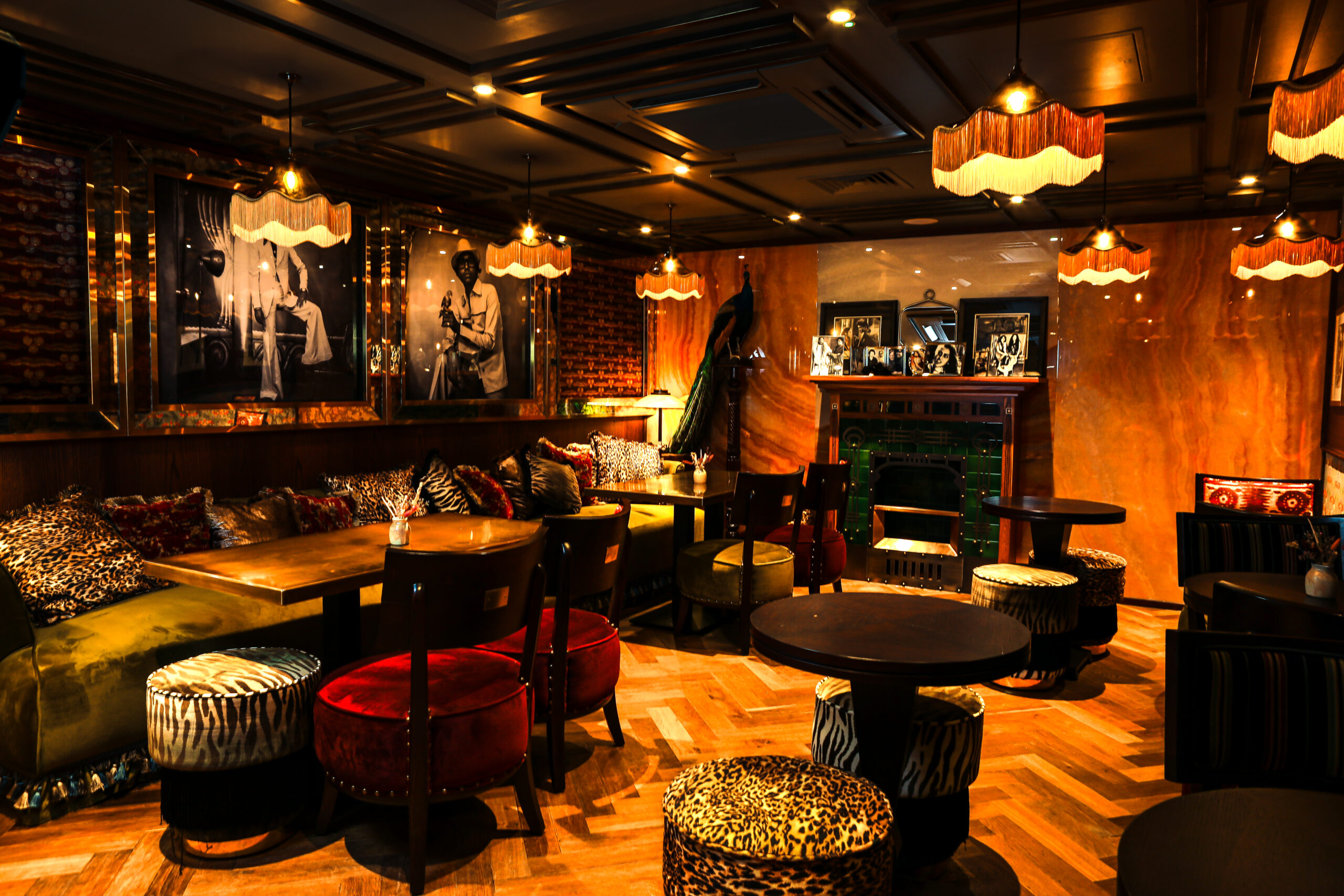 Interestingly, the entire bar was created in India and shipped to London in a container so as to “deliver a completely authentic feel”. The interiors are high-spec, with black and white posters, fringed brown glass lampshades, low velvet sofas dotted with leopard print pillows, and a copper–topped bar.

It was quiet the evening we were there but we were very impressed with the innovative cocktails (priced at £12.50, £14.50 or £16.50). First up was “Disco Inferno”, a deliciously addictive combination of cardamom-infused vodka, mango, chilli and lime (although it wasn’t served in a the glittering gold disco ball I’d read about). I also tried the zingy “Bangbang Bandstand”, with tequila, ginger syrup, lemon, pink grapefruit and ginger ale. 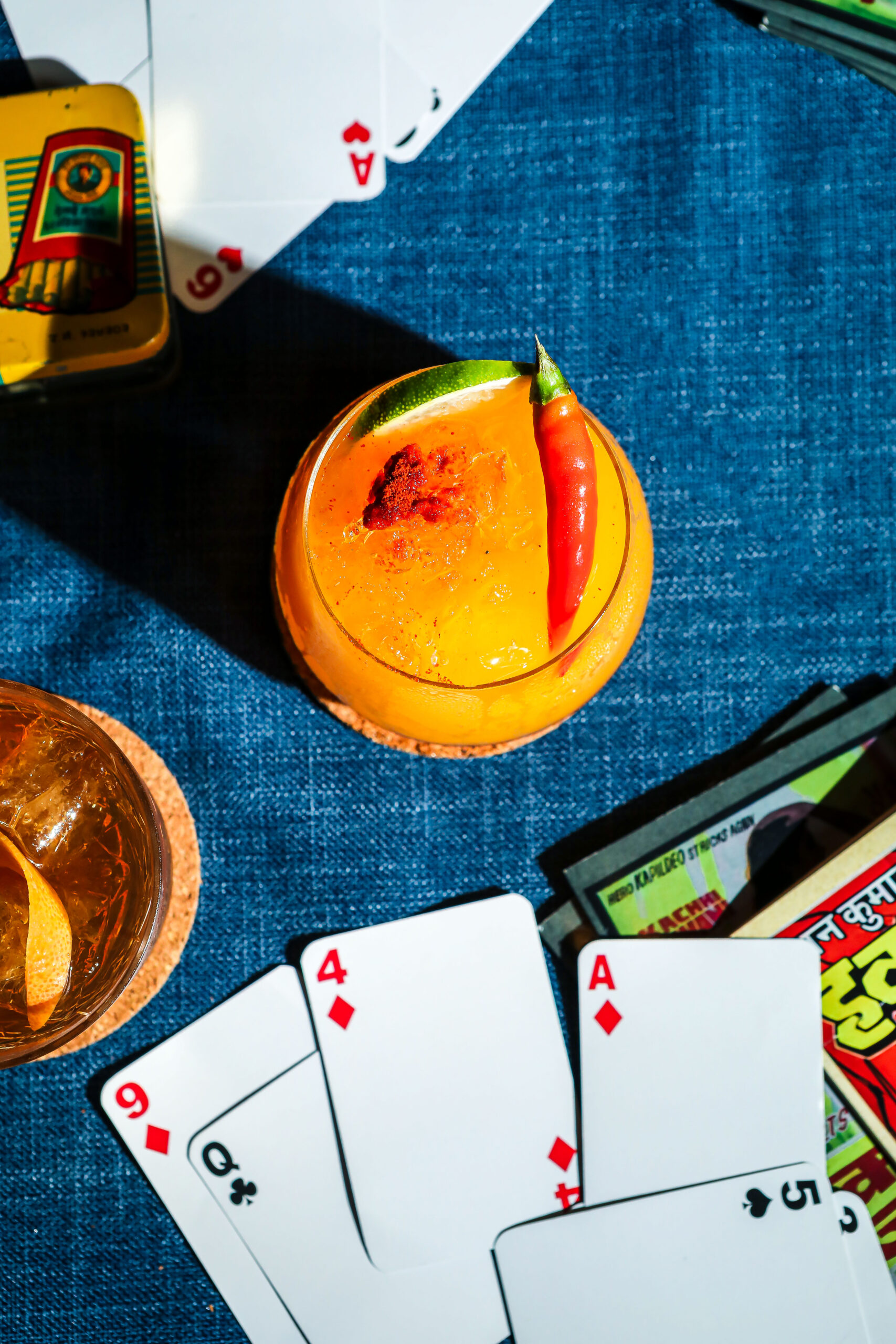 Far from being overly fruity and sugary, these with truly grown-up libations that have had a lot of thought and expertise put into them. Other tempting cockatils included the “Rajdoot”, a vodka martini inspired by the traditional “Vesper” but with a touch of Indian spice, cassia bark, samphire, sage and elderflower. “Shetty’s Sidecar” also sounded great – with cognac, pineapple, cardamom, almond and celery, finished with maraschino cherry and angostura bitters. 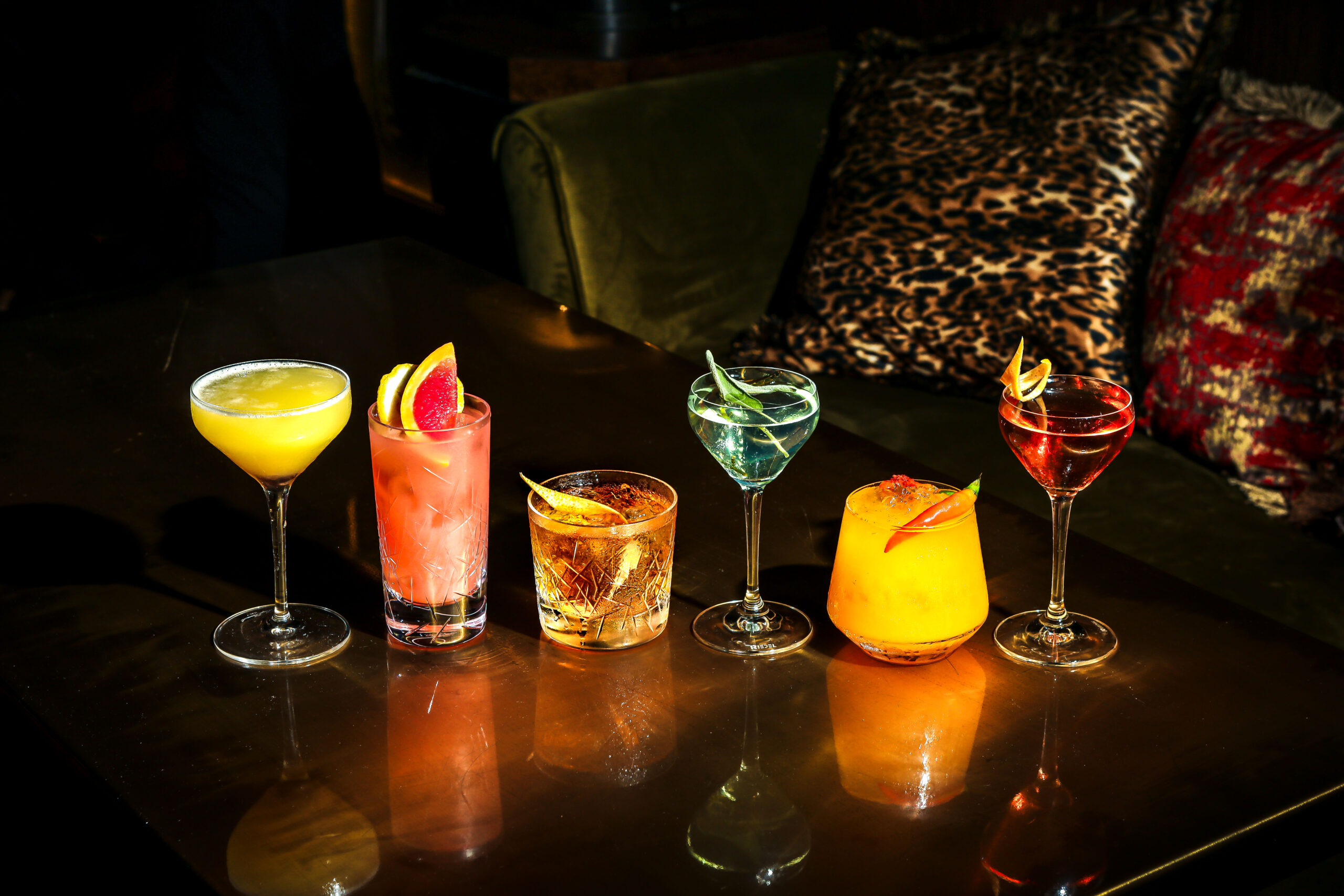 Clearly looking to appeal to rather more well-healed clientele than East London speakeasies, Bandra Bhai also focuses on champagne, with the house serve being Devaux’s Grande Réserve. It also lists Rathfinny, Dom Perignon and Krug. Bar snacks are available too – the roasted masala cashew nuts with avocado, tomato and lime (£10) are very tasty.

Bandra Bhai is open Wednesdays, Thursday, Friday and Saturday from 5pm until 1am. 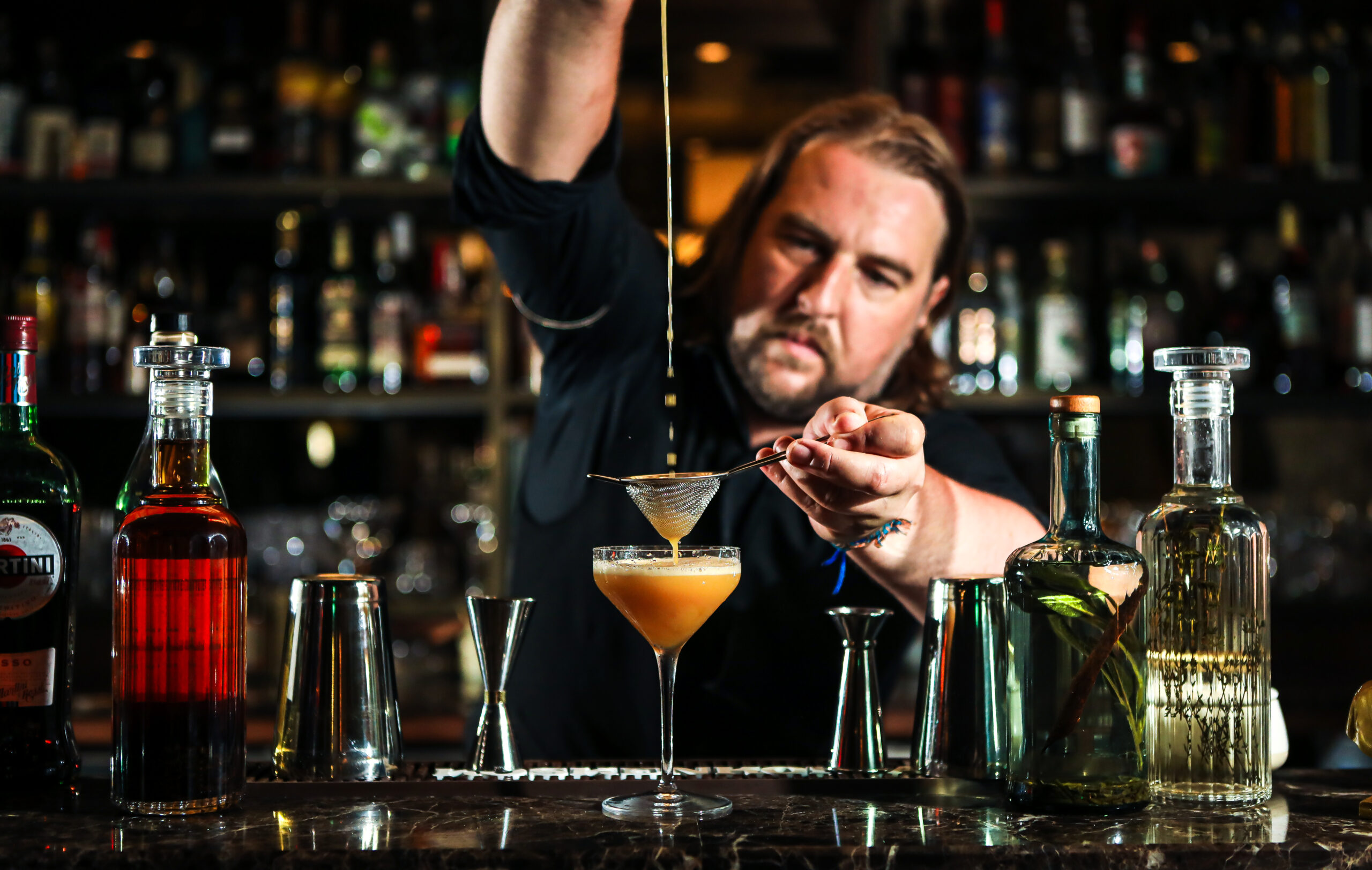 After our drinks, we went upstairs to Pali Hill for dinner. There was a time when generic and Anglicised dishes defined Indian food for many Brits, but thanks to a new legion of restaurants giving India’s ancient, diverse cuisines the respect they deserve, these days are numbered.

In London, our insatiable appetite for nuanced Indian regional cooking and street food has a new home at Pali Hill. Set on the former site of the upscale institution that was Gaylord restaurant (closed after 53 years of serving north Indian cuisine), Pali Hill is the London debut for Mumbai-based Azure Hospitality Group.

There’s plenty of intrigue on the menu; exotic ingredients – ajwain, stone flower, mirchi ka salan – sit alongside seasonal British produce such as Cornish lamb, Jerusalem artichokes and hand-dived Scottish scallops in small and larger plates, plus flamed dishes from the grill and bakes from the tandoor.

Yes, this makes it difficult to decide what to order, but it also means a surprise with every delivery.

Papadi chaat, those gloriously crispy snippets of fried dough come slathered in yoghurt and topped with tomato, pumpkin, pomegranate, sev, and a mint and tamarind chutney. Every mouthful is a perfect explosion of sweet, sour, salt and spice. We love it.

The tandoori Cornish monkfish with mango pickle marinade and new season blistered corn chilli and lime is another hit. Less successful, however, is the Mangalore bun and Dorset crab sukkha with fennel seeds, crushed chilli and ginger.

While it’s probably one of Pali Hill’s go-to crowd-pleasers, the combination of chunky, doughy bun and delicate crab meat doesn’t do it for me, the former drowning out the latter in a particularly boorish fashion.

Veggie? This being Indian food, there’s masses to to get excited about. From a sophisticated saag paneer with first of the season’s turnip tops, Tuscan kale, spinach and cumin; and roasted aubergine with yoghurt, wet walnut, chutney, pomegranate and mint; to stir-fried okra with ginger, tomato, fennel seeds, fresh coriander; you’ll appreciate the effort and imagination that runs through each plant-based dish.

The eclectic dishes are reflected by the contemporary dining room, which ticks all the groovy boxes – think nods to mid-century Indian design, a vibrant colour palette, and bespoke works by Indian artists – and while service is efficient and friendly, we were a bit miffed to see staff packing the restaurant down around us while we were still eating dessert. Either let us know it’s nearly time to go or wait just a few minutes before disassembling the vibe.

Pali Hill is not cheap. In fact, it’s pretty expensive, with the cheerful atmosphere belying the rather large bill that’s presented after a couple of beers and a modest-ish order. But portions are generous and we don’t leave wanting.