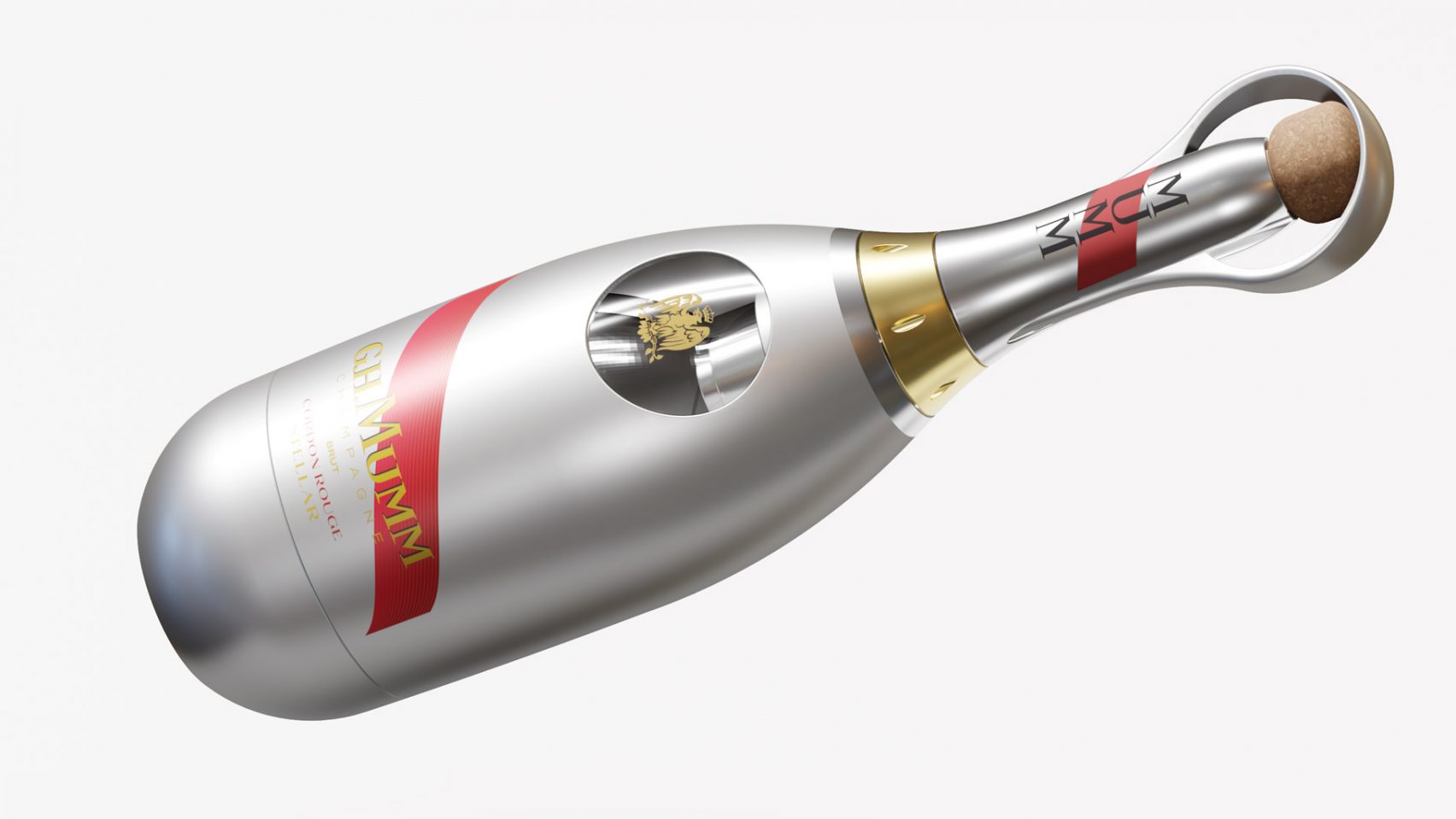 Maison Mumm has developed a champagne that has been designed to be quaffed in space, as a way of ‘maintaining a link with Earth and its culture’. Jenny Southan reports

Maison Mumm is taking fizz into the future with the release of Cordon Rouge Stellar, a custom-made champagne that has been designed to be drunk in space, aboard the forthcoming Axiom Space space station.

In order to comply with dual space-AOC champagne specifications, Mumm Cordon Rouge Stellar had to meet a complex set of constraints (for example, gaseous liquid in the absence of gravity, pressure contained in the bottle, food compatibility, material specifications, size, ergonomics and intuitive use).

To ensure it won’t explode, the glass champagne is encased in aeronautical-grade aluminium, the wine secured by a reliable stainless steel opening-closing device. The upper part, known as the “service” part, is composed of a long neck topped by a cork and a ring, which allows the cork to be retained and locks the bottle’s stainless steel mechanism. 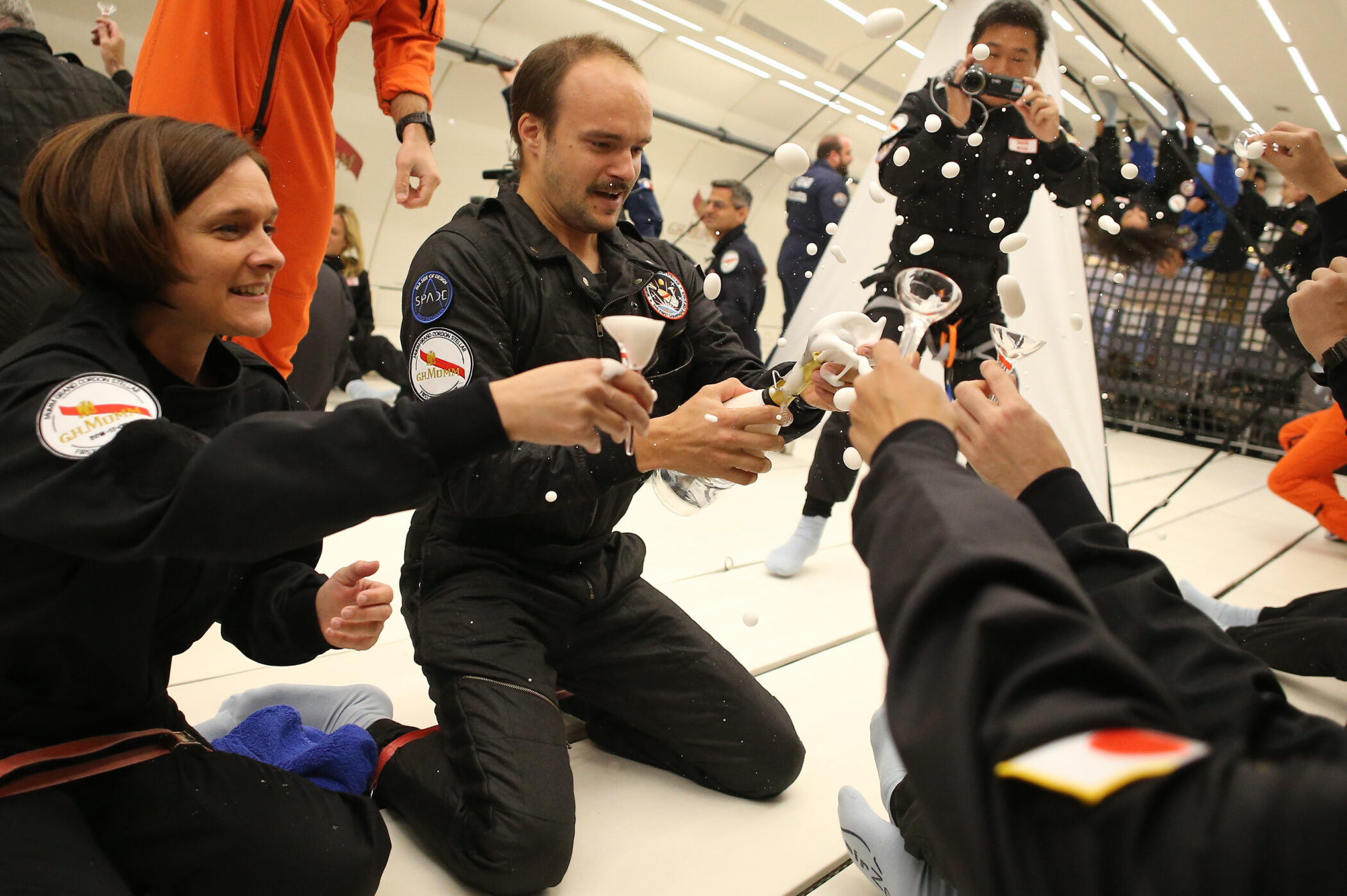 With its futuristic appearance, Mumm Cordon Rouge Stellar nevertheless has a shape that’s similar to a traditional champagne bottle and reproduces as faithfully as possible the ritual of champagne tasting.

Octave de Gaulle, founder of the SPADE (an agency specialised in the design of objects for space application), says: “This project is, of course, very stimulating because of its highly technological nature and its 100 per cent French identity, from design to manufacturing.

“But it is also very exciting because technology serves a greater purpose here: champagne condenses the memory of a terroir, a climate, an ancestral savoir-faire and tasting sensations for all those who will evolve far from Earth.”

The conditions of tasting champagne in space also differ on a physiological level with an alteration to the sense of smell. The behaviour of the champagne is also modified – because there is no gravity, the bubbles no longer rise to the surface so they don’t release the aroma molecules they contain.

Mumm says: “The sensory sequence is specific, creating new sensations. First, the sense of sight is solicited then the wine – in the form of foam – enters in contact with the lips and mouth and is inhaled through the mouth.

“Once inside the mouth, the foam coats the walls as capillary action takes place. The overall perception of the wine changes with the decrease in olfaction, which is a main feature of wine tasting. Certain notes are perceived more than others.”

Taking into account these specific parameters, Maison Mumm’s Cellar Master Laurent Fresnet has selected a blend of Mumm Cordon Rouge made with grapes from the 2016 harvest, which includes a majority of Pinot Noir – the house’s signature grape variety – and is supplemented with reserve wines from the past five years (up to 36 per cent).

Fresnet says:”My goal was to retain the freshness and power of Mumm Cordon Rouge, and to enhance the intensity of its aromas with more ageing and a dosage liqueur made with wines aged in oak barrels.”

With an ageing on laths extended to five years, the champagne has developed notes of ripe yellow fruit and vine peach, but also dried fruit, hazelnut and praline. Aged in oak barrels, the dosage liqueur, elaborated from wines, brings a touch of vanilla and pastry notes.

As a result, Fresnet has reinforced the characteristics of the Mumm style – freshness, intensity, complexity – in tasting conditions where the senses – olfactory and gustatory – are altered.

“This philosophy of celebrating humankind empowers our goal for Axiom Station, a next generation destination that will serve as a thriving home in space to enable a diverse space economy, further exploration and enable more of humanity to access space.”

César Giron, president of Maison Mumm, says: “Innovation has been part of Maison Mumm’s identity since 1827 and Mumm Cordon Rouge Stellar is a perfect illustration of this.

“This project brings together the French savoir-faire of excellence for the benefit of conviviality that is so dear to us here on Earth.

“As early as 1904, Mumm was present on board with Commander Jean-Baptiste Charcot to celebrate the first successful French expedition to Antarctica. Tomorrow, it will accompany the life of the pioneers of the 21st century in the same way in this new territory that is space.”

Collaborator Jean-François Clervoy, a French European Space Agency astronaut and veteran of three NASA space missions, says: “In space, it is essential to maintain a link with Earth and its culture. As a symbol of the art of living that has endured through time, champagne has this universal appeal.”

Mumm Cordon Rouge Stellar will be served on board Axiom’s upcoming crewed missions to low Earth orbit and on the Axiom, the world’s first commercial space station, to test and discover the tasting ritual in the real conditions of space.