Opened in 2017, the Nobu Hotel Ibiza Bay not only provides guests with room service from its own on-site Nobu restaurant but access to wellness hikes, sound healing and rooftop movies. Jenny Southan reports

Known for its chain of high-end Japanese restaurants from chef Nobu Matsuhisa, the Nobu hotel group now has 27 properties in destinations such as Manila, Miami Beach, Malibu, London, Barcelona and Chicago.

The question is – how does its culinary prowess translate to hotel hospitality? (I stayed in the Nobu Las Vegas and thought the restaurant was superb but the rooms were pretty bland and forgettable.)

Open seasonally, the Nobu Hotel Ibiza Bay was first unveiled five years ago on a stretch of coast not far from Pacha nightclub and Ibiza Old Town. (Note that there is a manmade strip of sand at the back of the property for kids to play on but the beach itself is covered in seaweed so the sea is pretty innaccesible.) 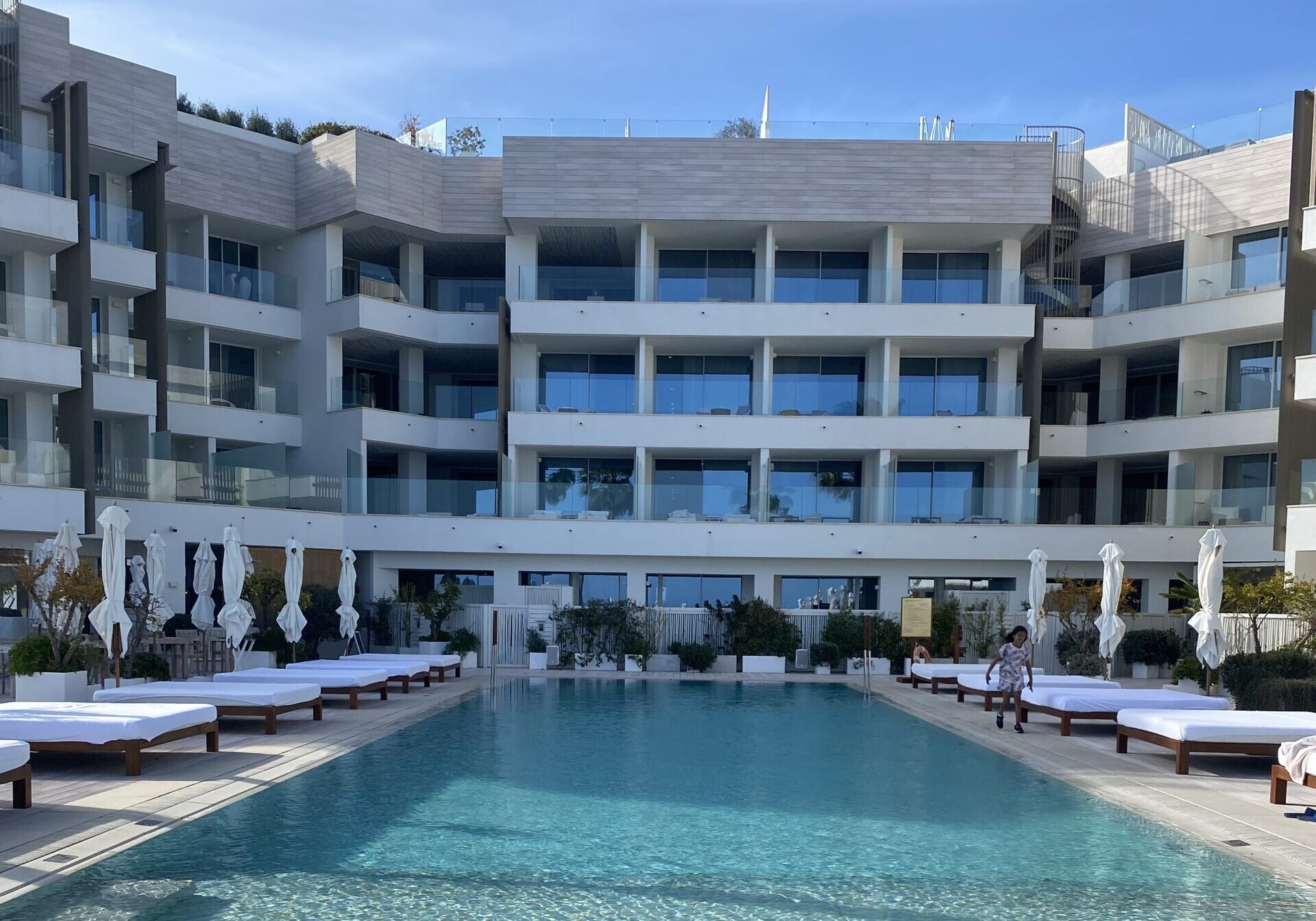 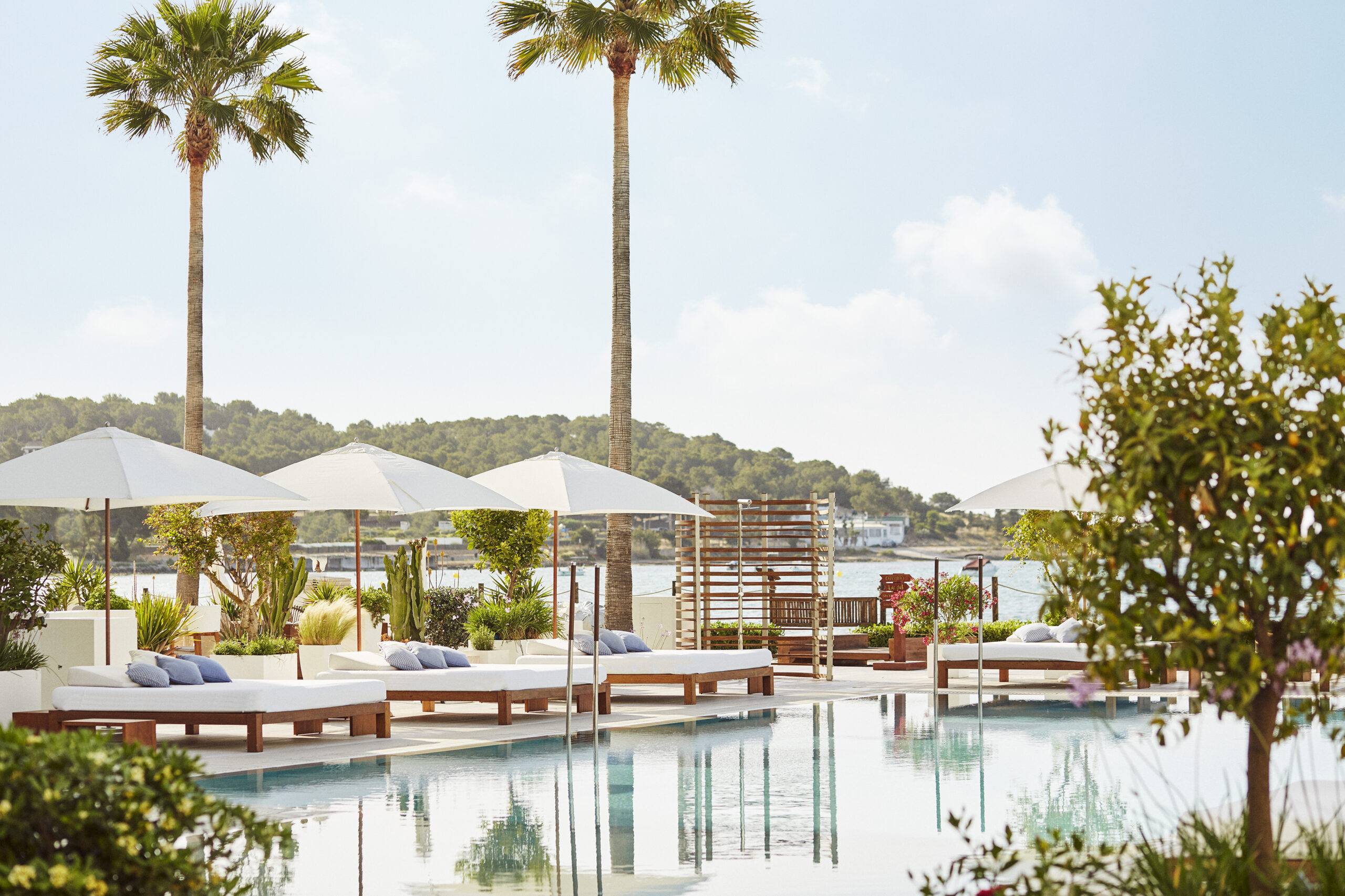 In addition to 152 rooms (90 of which are suites), the property also has a Spa by Six Senses, a hair salon by John Frieda, a kids club, a gym (but not with sea views), two large outdoor pools (one for families) with lots of gorgeous loungers and cabanas, and three restaurants – one of which is a Nobu, obviously. 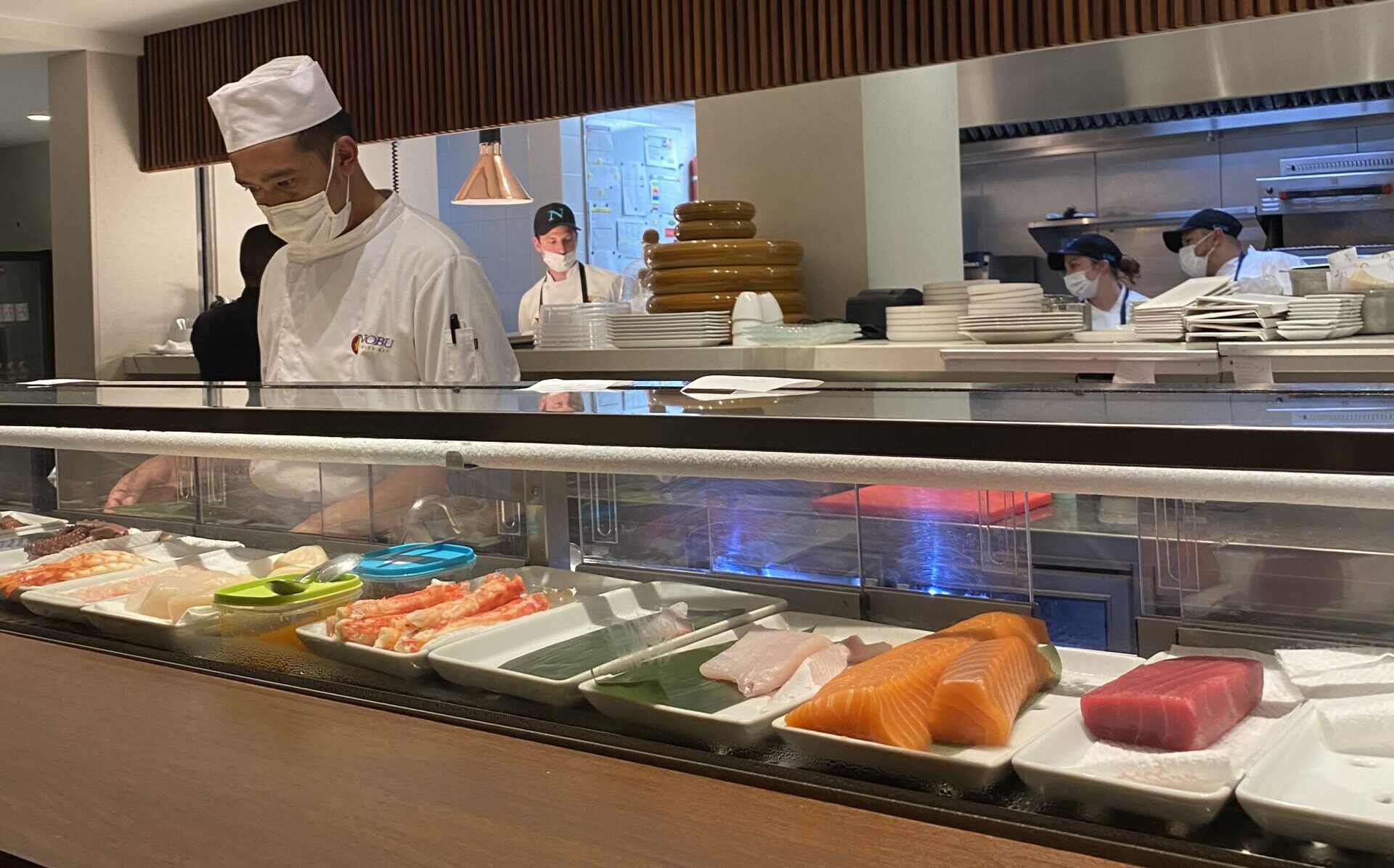 The second restaurants is BiBo by Michelin-Starred Chef Dani Garcia but it wasn’t open when I visited at the start of the season. I did, however, recently review the branch in London at the Mondrian hotel in Shoreditch and you can read the review here.

Third is casual Chambao (below), where a buffet and a la carte breakfast is served in the morning, as well as lunch. It has a nice rustic, beachy vibe and really warm staff. 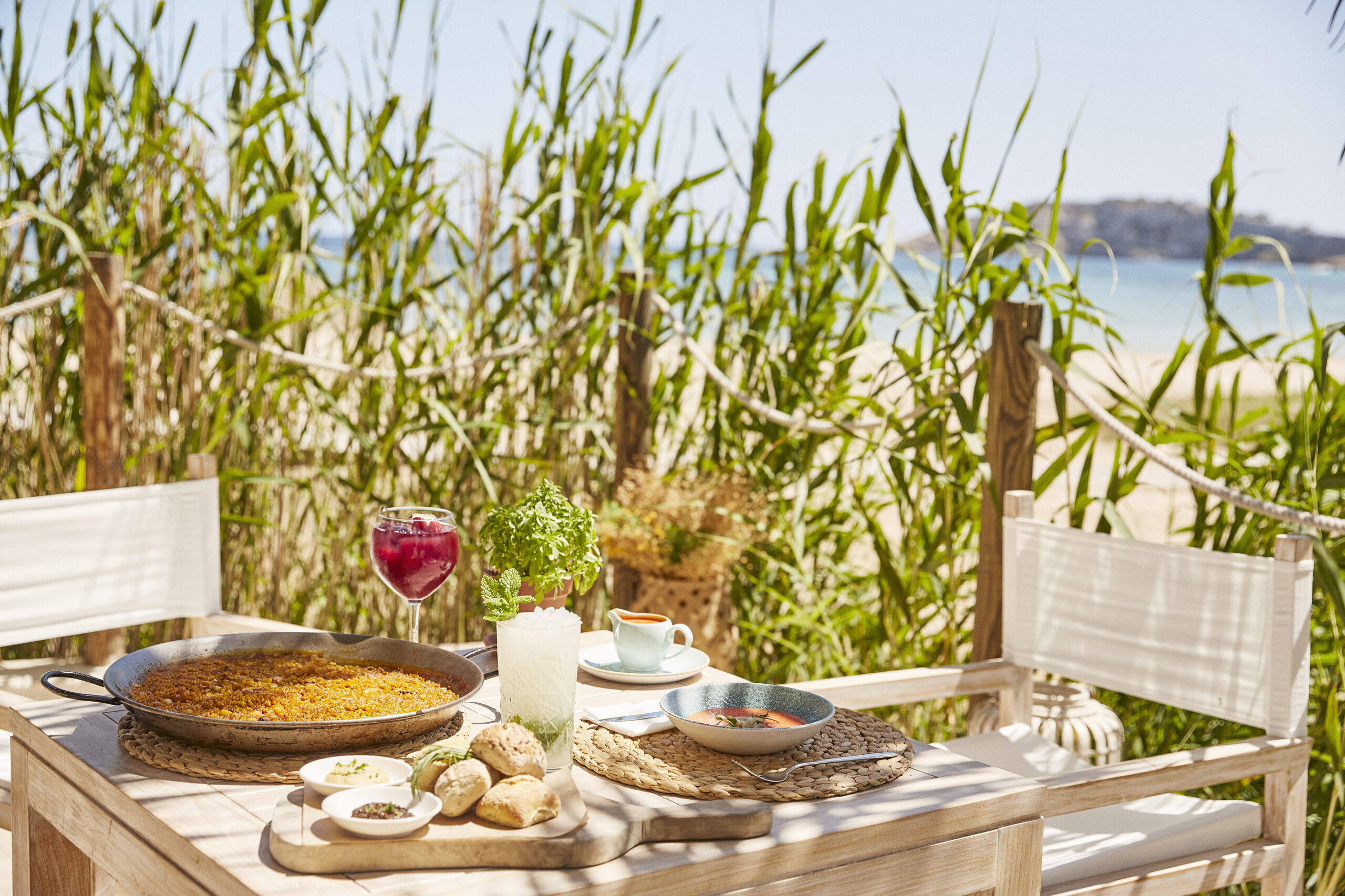 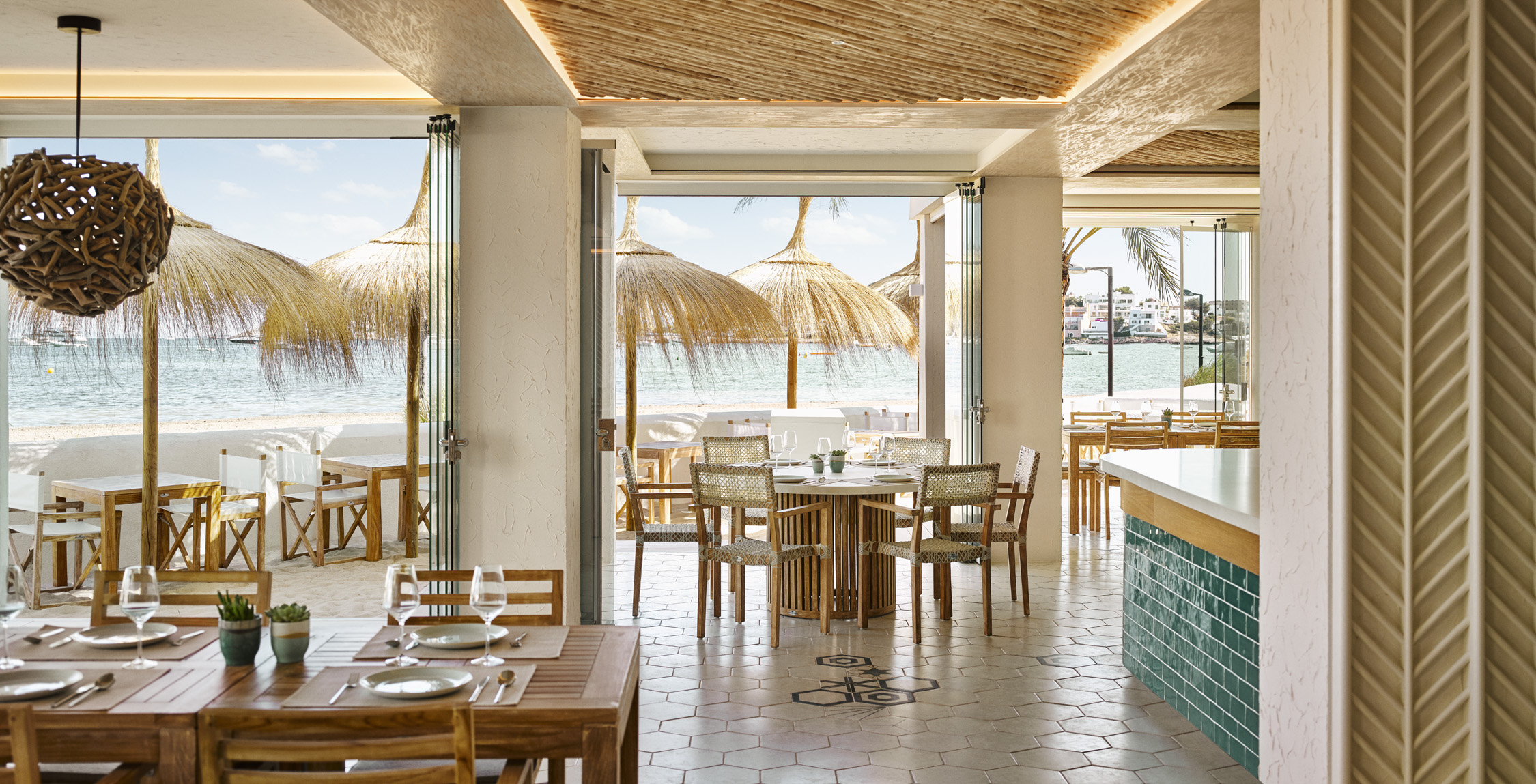 Reopened on April 8, 2022, after being closed for the winter, the property features a new rooftop terrace that hosts events in in partnership with electronic dance music specialists SUCO (the Sunshine Collective), plus “sound healing events” and the Nobu Lounge for cocktails and sets from local DJs. 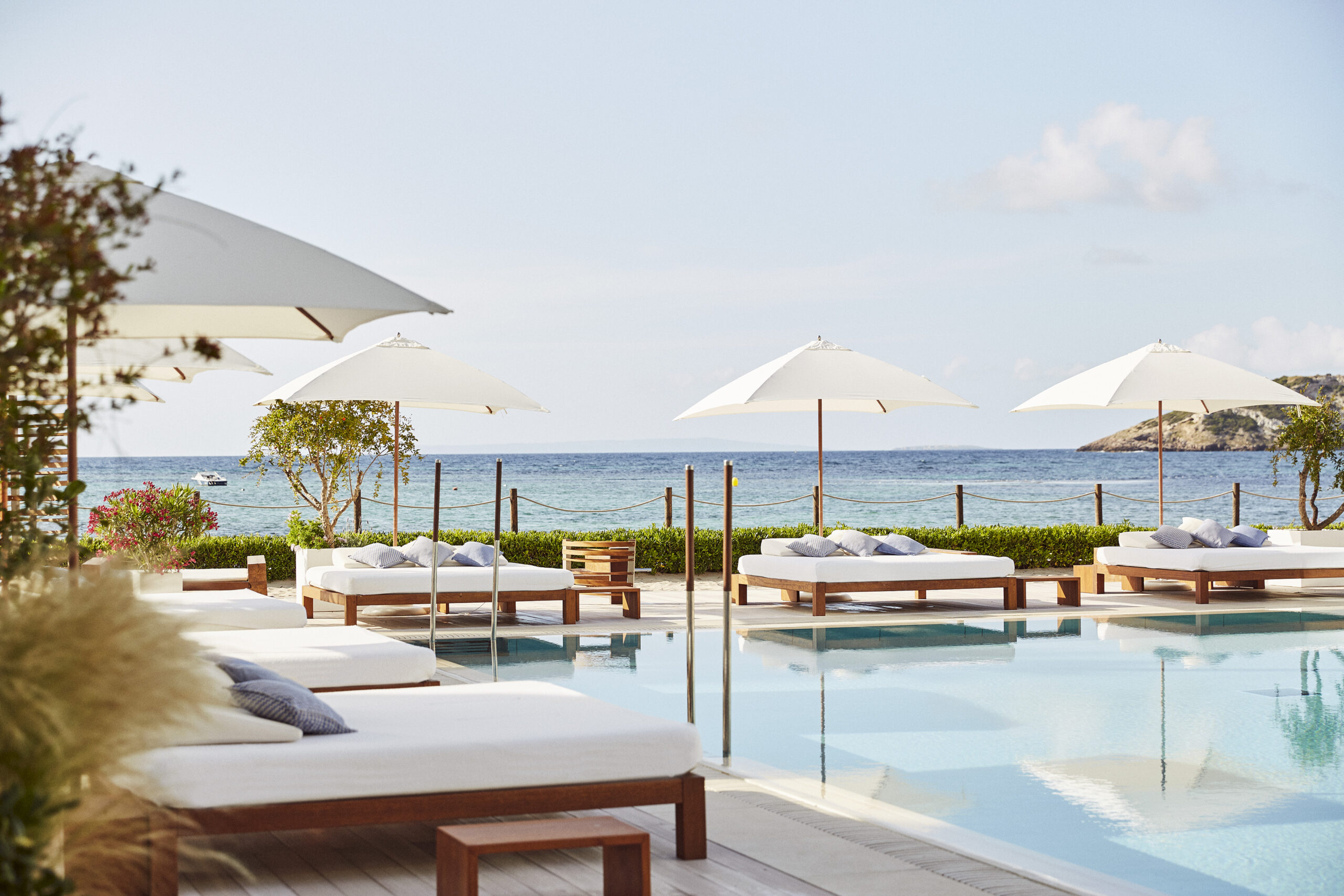 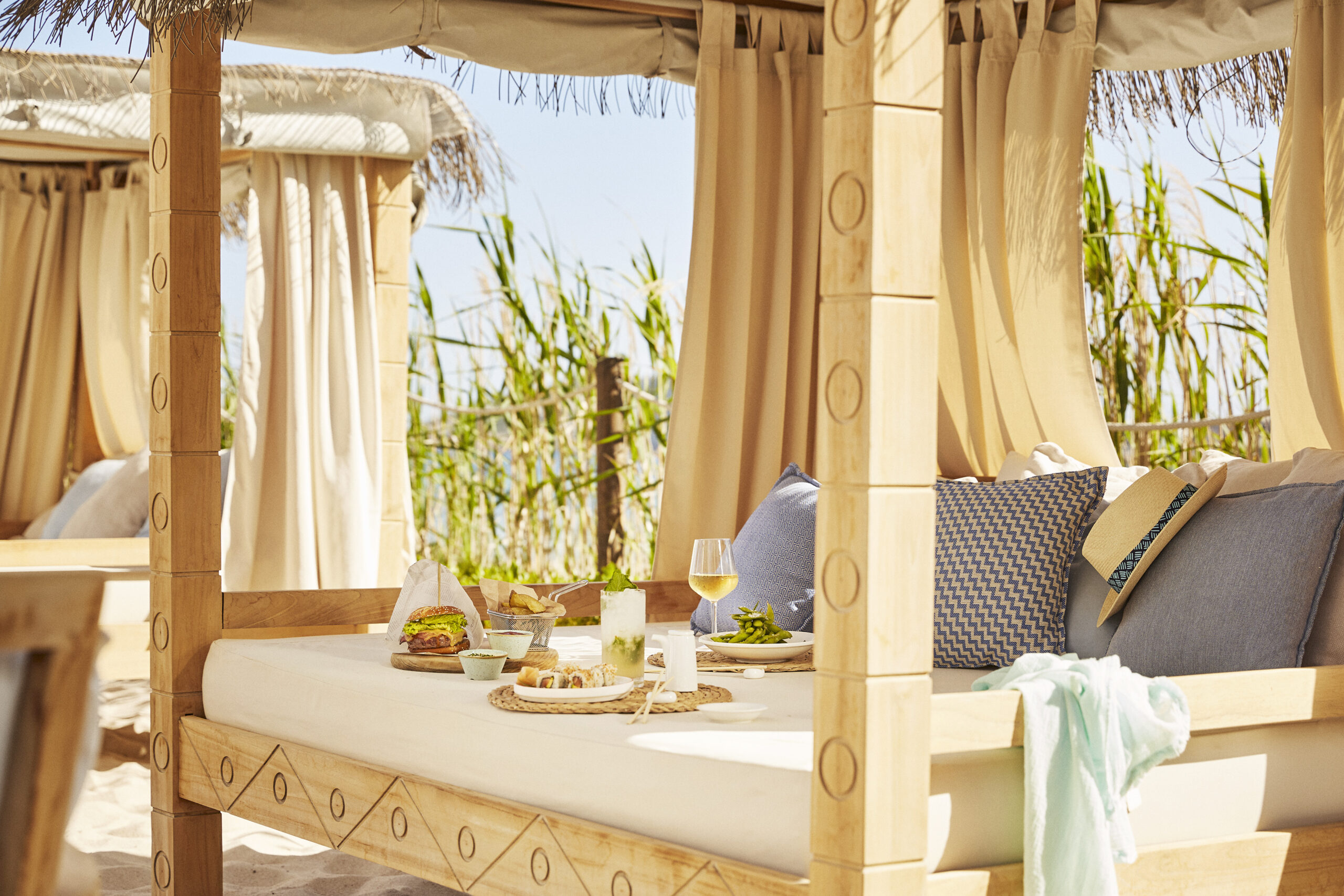 There is also a new outdoor exercise area and Teen Programme. I was travelling with my young daughter who visited the Kids’ Club a couple of times – she particularly enjoyed the pizza-making class they put on.

One of the things that captured my interest were the new wellness hikes being offered via friend of the hotel, Manuel Ehrensperger, who formerly worked in senior roles at companies such as Swarovski and Chopard.

Putting the corporate life behind him, he has now set up Ibiza Hike Station, which sees him working full time on taking people on cliff-top hikes around the island and has an exclusive tie-up with the Nobu Ibiza Bay. As you can see from his Instagram page, many people sign up to get incredible shots for their social media profiles but you need to have a head for heights. 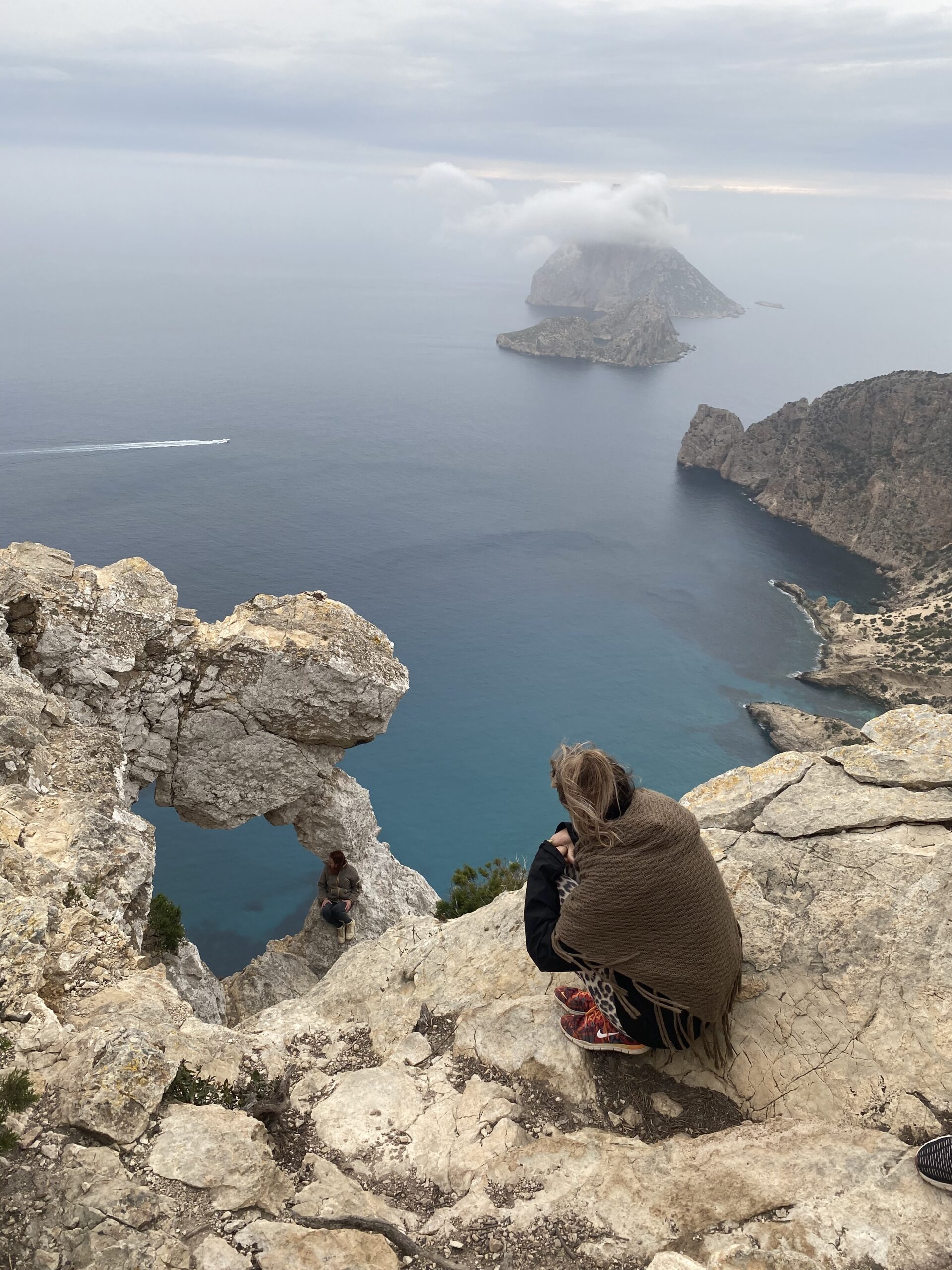 Although the hotel advertises the hikes as being for “wellness” and encourages participants to turn off their phones, when I joined a group of Dutch women for an afternoon hike, they were all obsessed with having Ehrensperger take photos of them pretending to meditate in the most precarious of locations. 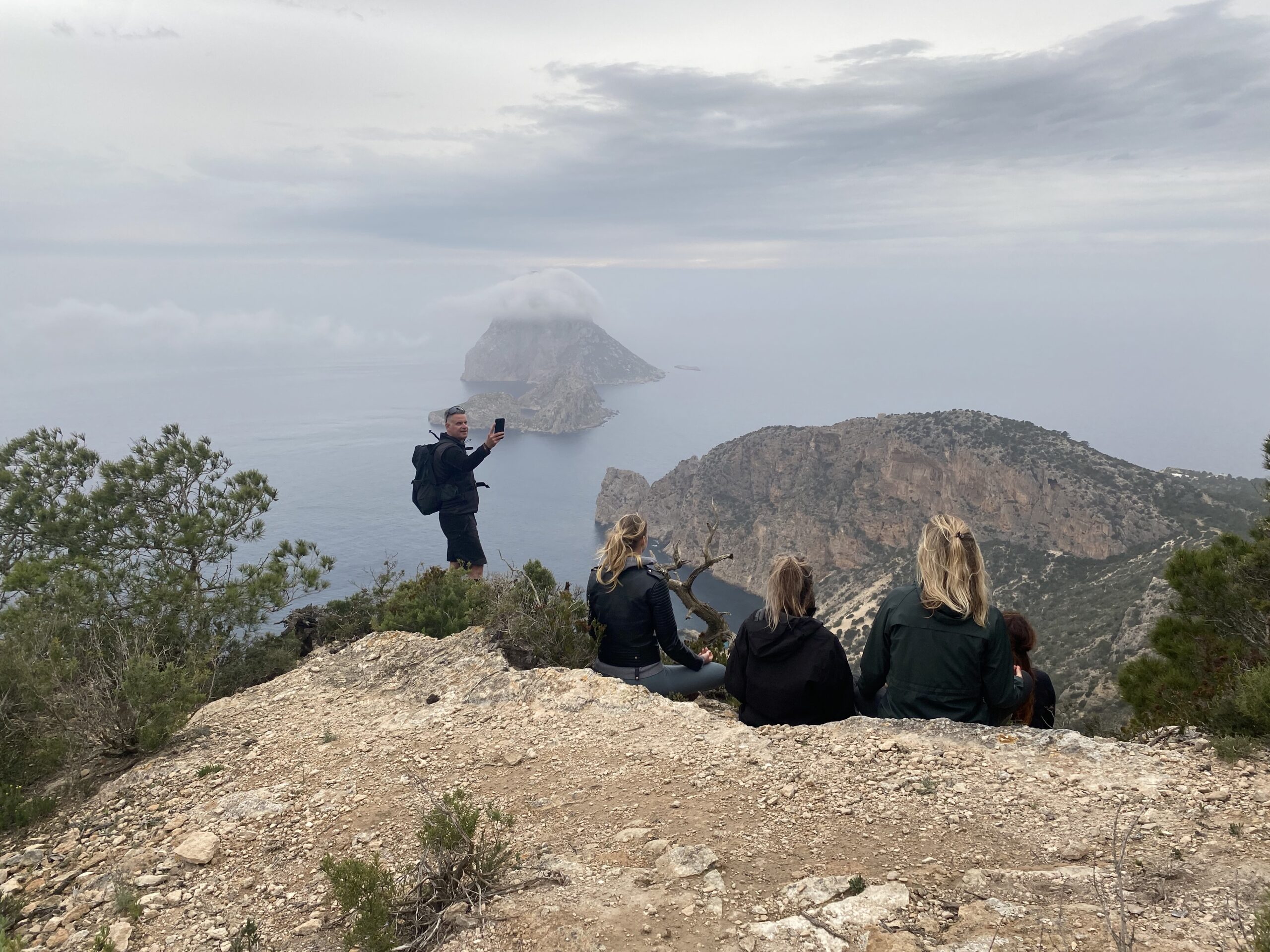 He’s very good at this and loves finding just the right angle and vantage point for the most impressive photos but if this isn’t your thing, then make that clear and do a hike with your own friends and family. (Personally, I got fed up with waiting for them to get the perfect selfie.)

When the weather is cooler in September and October, the hotel will also launch a series of three-day hiking retreats with free activities such as sound healing classes, rooftop wellness sessions, meditation and two signature spa treatments included in the price. It’s an interesting move away from Ibiza’s better-known fixation with clubbing.

Other activities guests can sign up for include sunrise Pilates sessions and open-air movie screenings of Robert De Niro movies (he is a Nobu Hotels co-founder), accompanied by popcorn and Japanese bento boxes.

As a guest, I found the decor of the property to be a bit stark and dated, and rooms didn’t have any sense of Japanese design, which you do find at other Nobu Hotels around the world. This struck me as a missed opportunity to extend the “Nobu” brand throughout the hotel experience.

(Our room didn’t have any “hand-crafted ceramics or natural woven lamps” either, as advertised. It was pretty spartan and lacking in personality.) Low season room rates start at Nobu Hotel Ibiza Bay start at €450 a night and high season starts at €850.

You can order Nobu cuisine as room service, though, and I loved having a room with large terrace facing the sea (ours didn’t look as beautiful as this though). 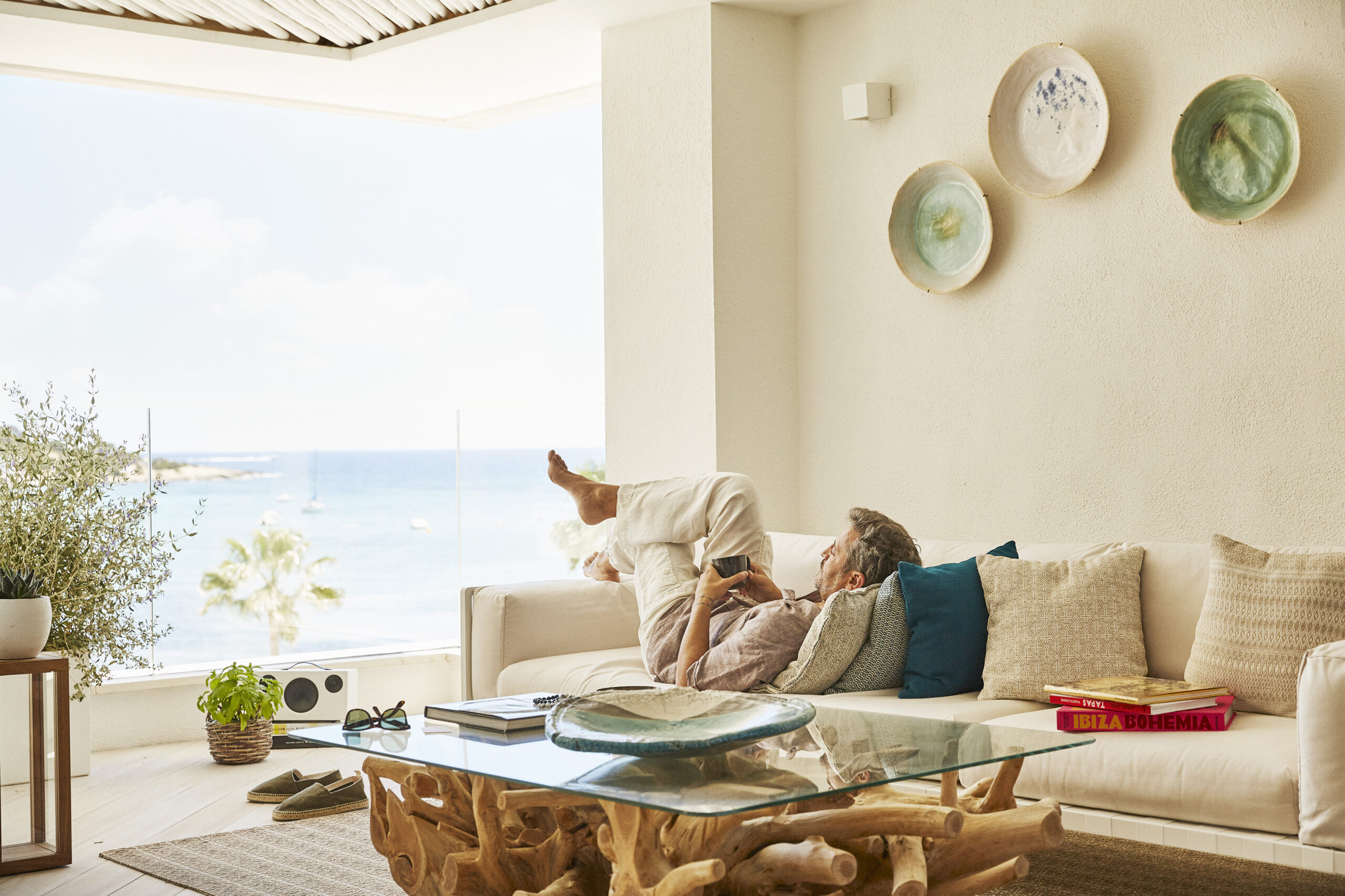 The highlight of the stay was dining – twice – at Nobu. Although the restaurant itself doesn’t have much “wow” factor in terms of interior design, the staff are very friendly (they even welcomed our young daughter one evening) and the food is outstanding. 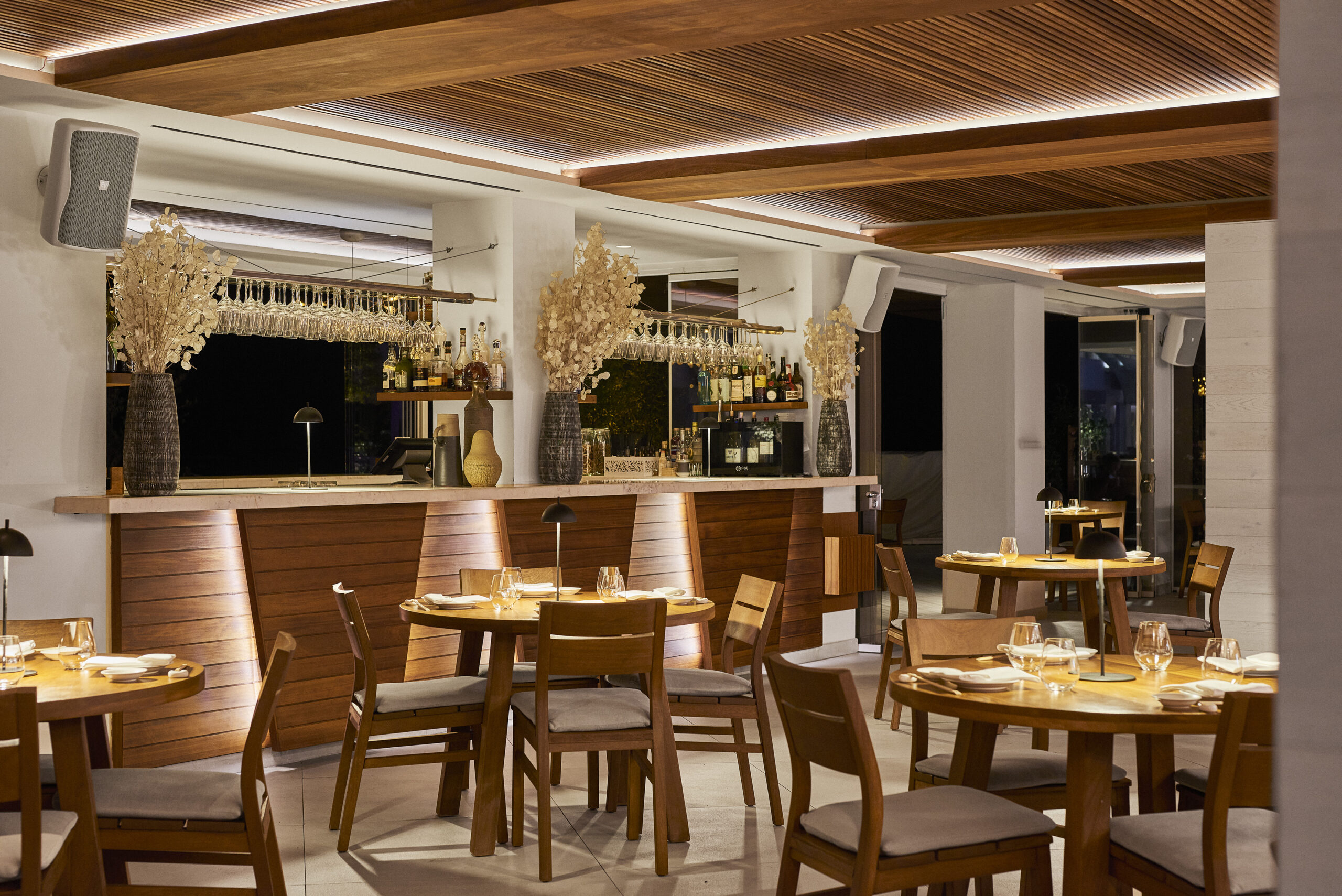 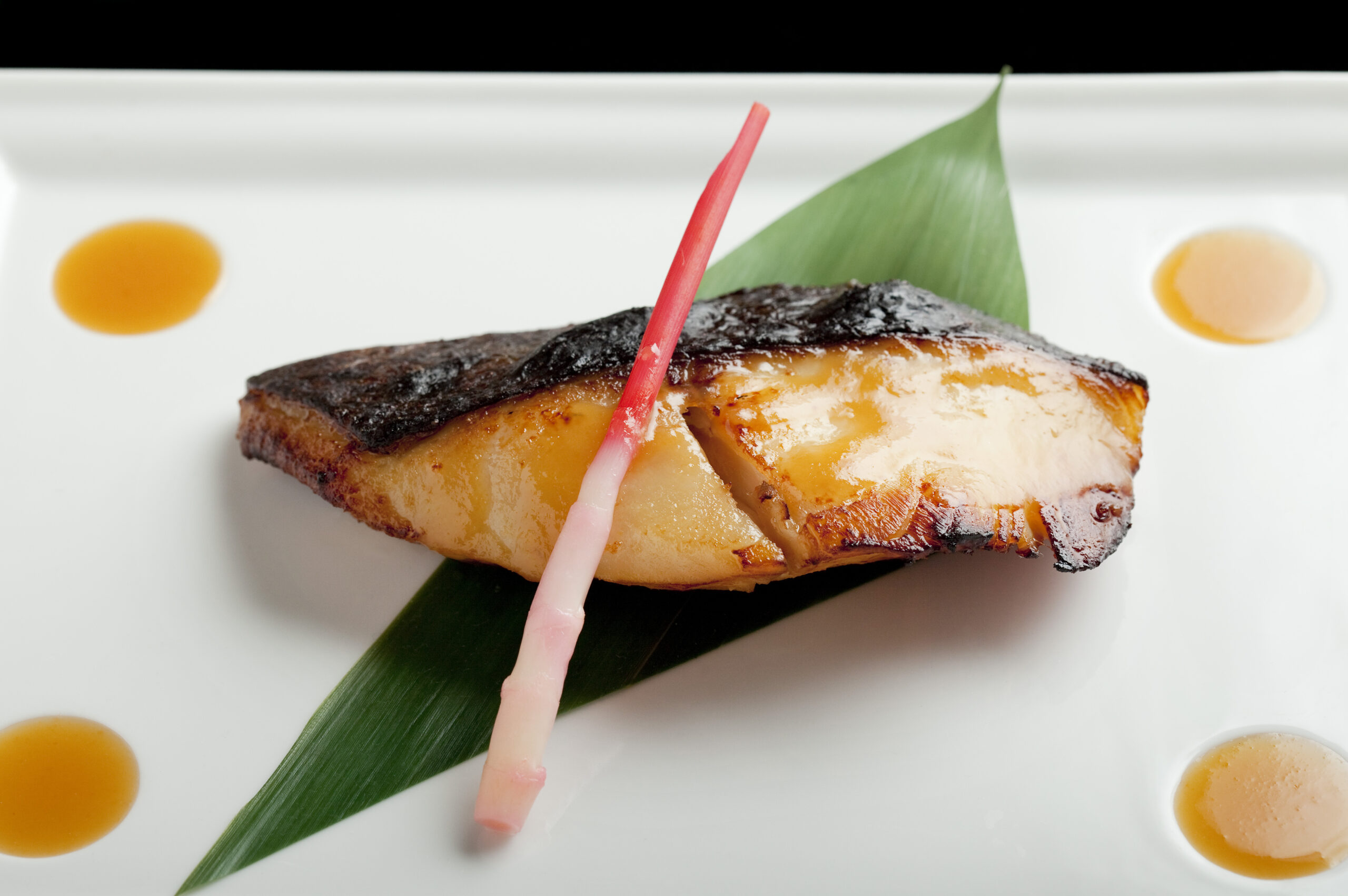 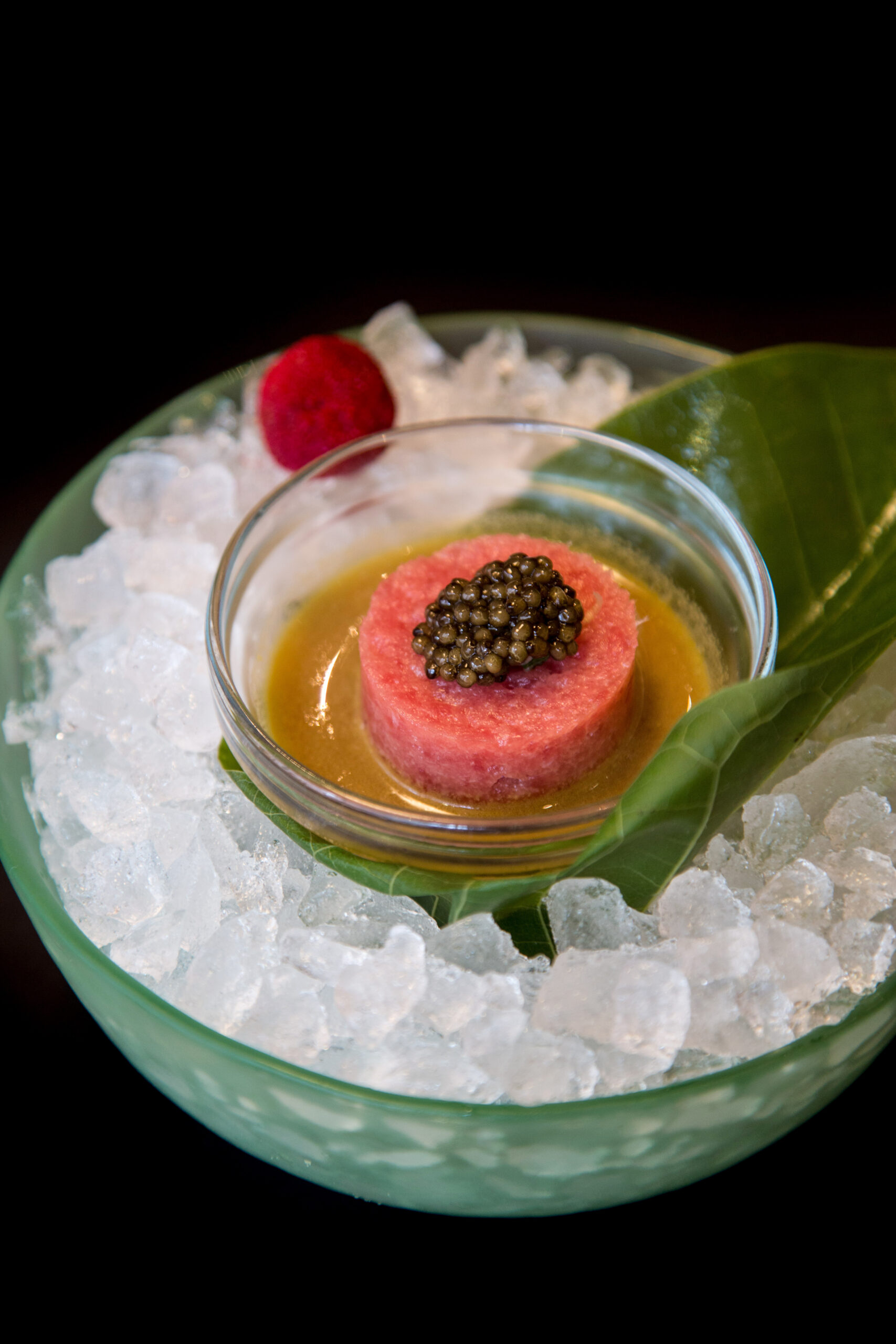 It should be noted that I didn’t see any mention of the sustainability of the fish and seafood being served so this is something to consider. At The Aubrey Japanese restaurant at the Mandarin Oriental hotel in London, for example, they don’t serve tuna because fishing it is not sustainable.

As a vegetarian, I really liked the cubes of crispy rice with avocado (€21) – you can also order this with spicy salmon, the roasted cauliflower with jalapeno (€17) and the vegetable hand roll with sesame sauce (€16). It’s expensive but such a treat to have a legitimate “destination restaurant” just a short walk from where you are sleeping.

This isn’t the most beautiful part of Ibiza (the north is more unspoilt) and I don’t think this property is reflective of the best Nobu Hotels around the world but I liked the way it is expanding its wellness offering in an innovative way to give hedonists more balance.

The Nobu sushi is an undeniable lure, although more attention needs to be paid to its sustainability credentials. We felt very well looked after during our stay and felt it was a good option for families who could afford it (a fresh coconut by the pool costs €15).