Museum of the Future to open in Dubai later this year

The architecturally imaginative Museum of the Future is inscribed with Arabic poetry and will house immersive displays on ideas that are set to change the world. Olivia Palamountain reports

The Museum of the Future will be a new cultural landmark for the UAE when it opens later this year in downtown Dubai, just a seven-minute drive from the famous Burj Khalifa skyscraper.

According to the emirate, this ambitious US$136 million project “will house an incubation centre for new inventions coupled with a museum of prototyped ideas”.

If the concept of the Museum sounds surreal, wait until you see its home. Designed by local architectural firm Killa Design, the 77-metre-high torus-shaped building is clad in stainless steel panels and covered with Arabic calligraphy, purportedly lines from a poem by ruler, Sheikh Al Maktoum himself. At night, the script is illuminated to reveal his words. 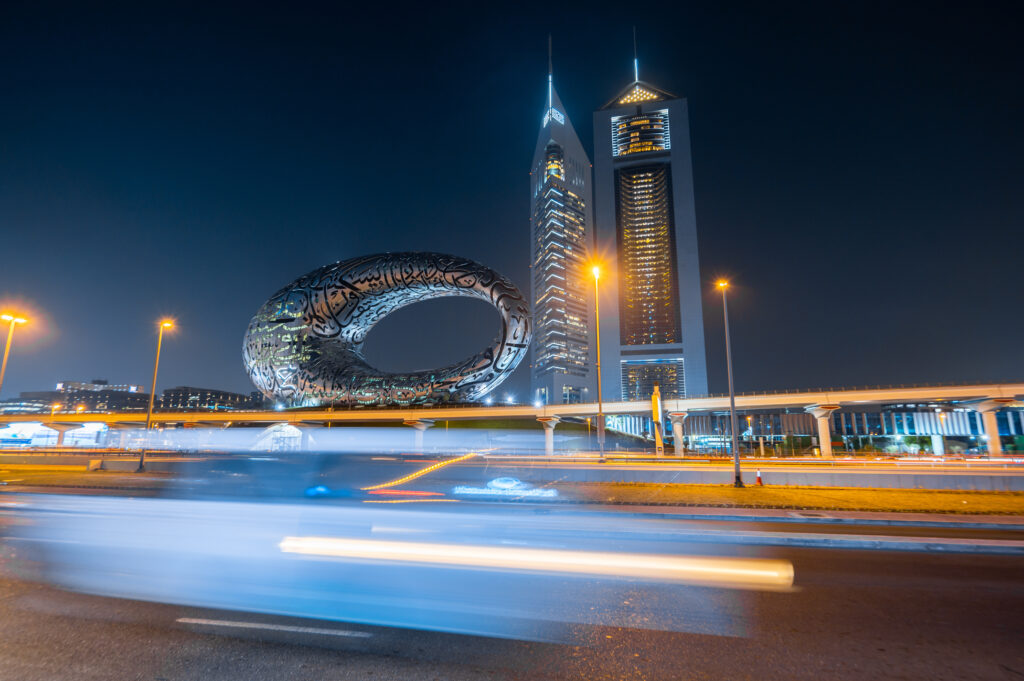 According to the architect, the solid part of the structure represents the knowledge that we have today. The void represents all that we do not yet know – in other words, the future, reports the BBC.

“The Museum of the Future will be an incubator for ideas and real designs, a driver for innovation and a global destination for inventors and entrepreneurs,” said Sheikh Mohammed at the unveiling. “The future belongs to those who can imagine it, design it, and execute it. Here in the UAE we think differently. While others try to predict the future, we create it.”

The Museum of the Future seems to be another manifestation of the emirate’s continuous drive for reinvention, with The Wall Street Journal reporting that Dubai is funnelling increasing amounts of money into technology innovation, including funding competitions such as “Drones for Good” – a US$1 million prize to find humanitarian uses for drones that was won by a collision-proof search-and-rescue model from Switzerland.

Exhibitions build on over five years of immersive displays that were created for Dubai’s annual World Government Summit and focused on the role of future technology in diverse sectors such as government services, healthcare, climate change and food security.

More than 30,000 sqm will be divided into six floors of exhibition space focused on the likes of the possible futures of outer space resource development, ecosystems and bioengineering, and health, wellness and spirituality.

Another floor will be dedicated to showcasing near future technologies set to transform the world by addressing challenges in areas such as health, water, food, transportation, and energy, while the final floor is dedicated to children, full of puzzles and challenges.

Sheikh Mohammed Bin Rashid Al Maktoum, vice-president prime minister of the United Arab Emirates and Ruler of Dubai, says that the Museum of the Future is a “global monument of urban excellence and a quintessential Emirati contribution to delivering a brighter future”.

“Though it is a marvel of modern engineering, it speaks in the Arabic language,” he says. “The Museum of the Future is a global architectural icon that shows that human miracles are possible. It will play an instrumental role in our efforts to shape a better future.

“We are not merely seeking to create architectural wonders, our main focus is on unleashing the highest human potential and creating a better tomorrow. The building is a testament to the remarkable progress achieved by the UAE.

“In line with the vision of His Highness Sheikh Mohammed bin Rashid, we are always seeking to push the boundaries of excellence and leadership. Today we stand before one of the most innovative buildings in the world that is a testament to Dubai and the UAE’s excellence in creative design, engineering, and architectural innovation.”