The sky’s the limit when it comes to Manchester’s evolution  – quite literally. Not only is everyone’s favourite northern powerhouse now home to a ton of hip new bars and restaurants, but as of November 2022, Manchester will have the largest number of high-rises in the UK outside of London.

A relatively new addition to the soaring skyline is the Hotel Brooklyn, a ten-storey, four-star hotel located a heartbeat away from Chinatown and the Gay Village. Brooklyn – in Manchester? If that makes about as much sense to you as garlic bread does to Peter Kay, don’t worry, I can explain.

The Northern Quarter and its imposing red-brick buildings have doubled as New York City in loads of films and TV series, including Alfie, Captain America and The Crown. Add Manchester’s unprecedented boom and new skyscrapers to this fact and, according to some people, you have…Manc-hattan (soz).

Hotel Brooklyn is by no means the only local establishment running with the NYC theme, and while it’s just a bit of fun, it irks me that bold, brash and brilliant Manchester feels the need to align with an icon over the pond to elevate itself by association. 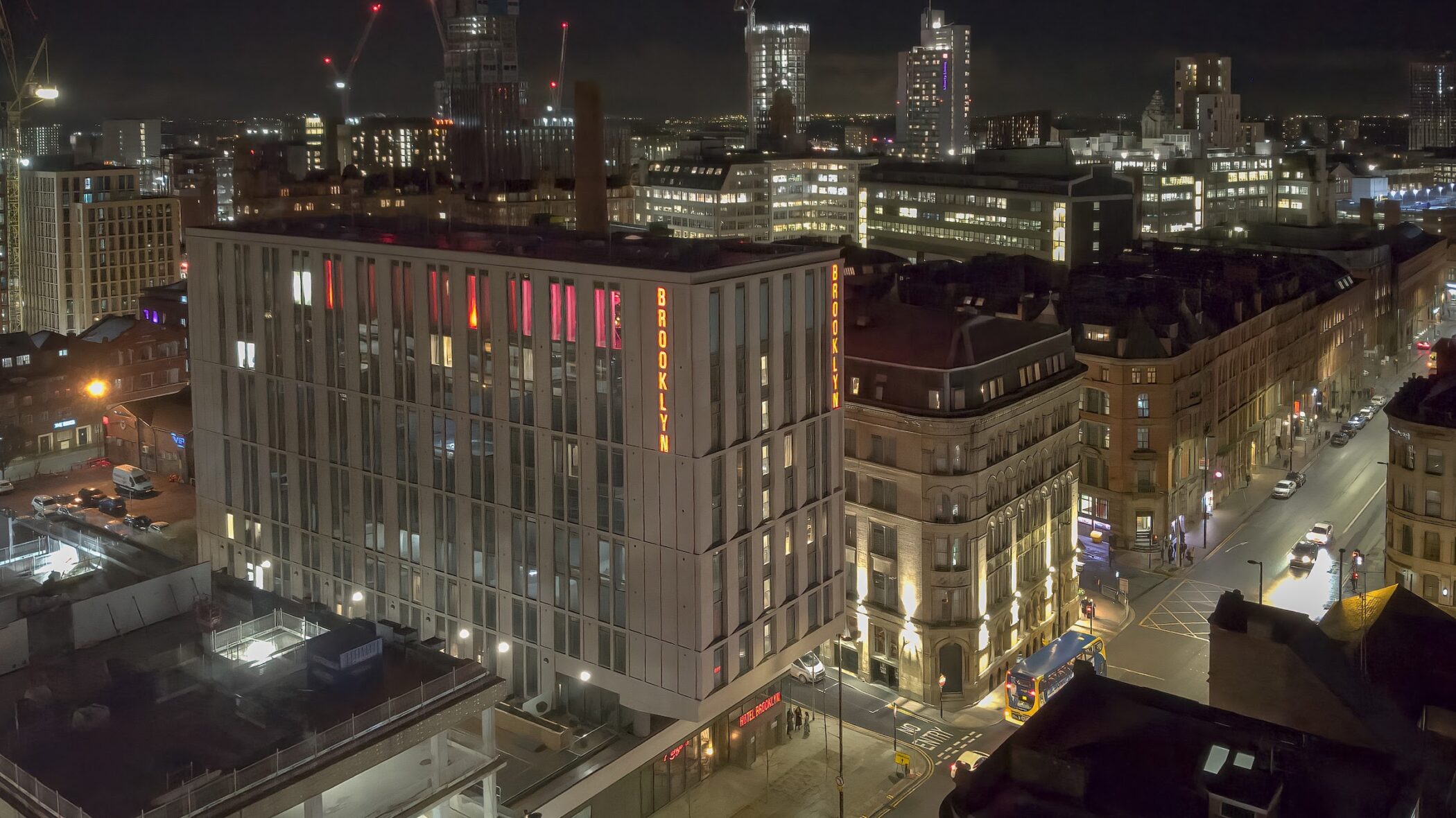 Communication with the hotel pre-arrival is faultless. Confirmation emails come thick and fast, are easy to digest and include the option of an advance check-in. Smooth service extends to our arrival at the property; iPads are on hand to sort yourself out, but we opt for the human experience, and are given an extremely warm welcome and big smiles on the door. 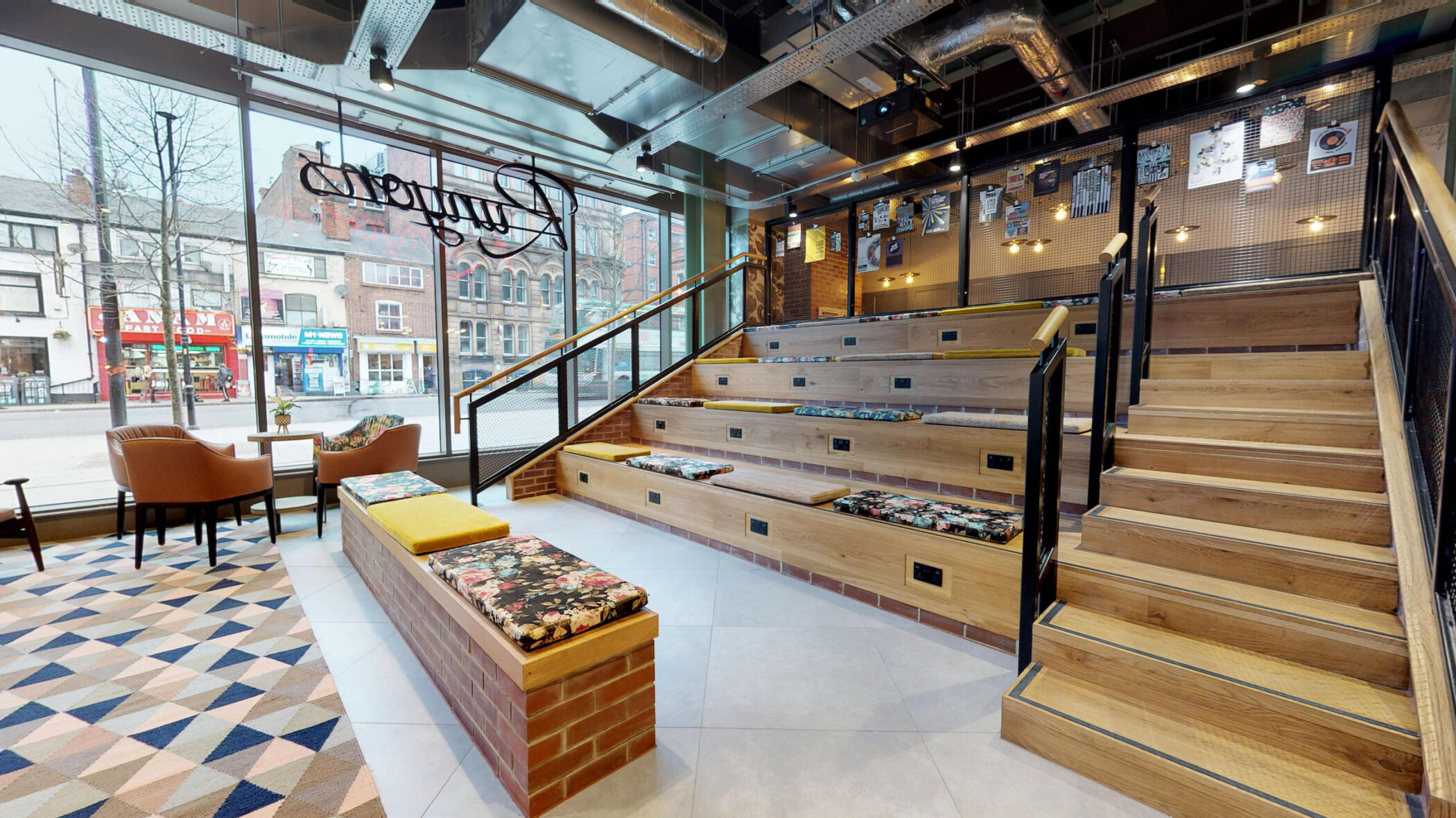 On the ground floor are various public spaces, including a cosy, tiered seating area that takes in a cinema-style tele, as well as an American-style restaurant called Runyon’s and a rooftop bar for special events. Fancy a flutter? Next door is casino, Napoleon’s. 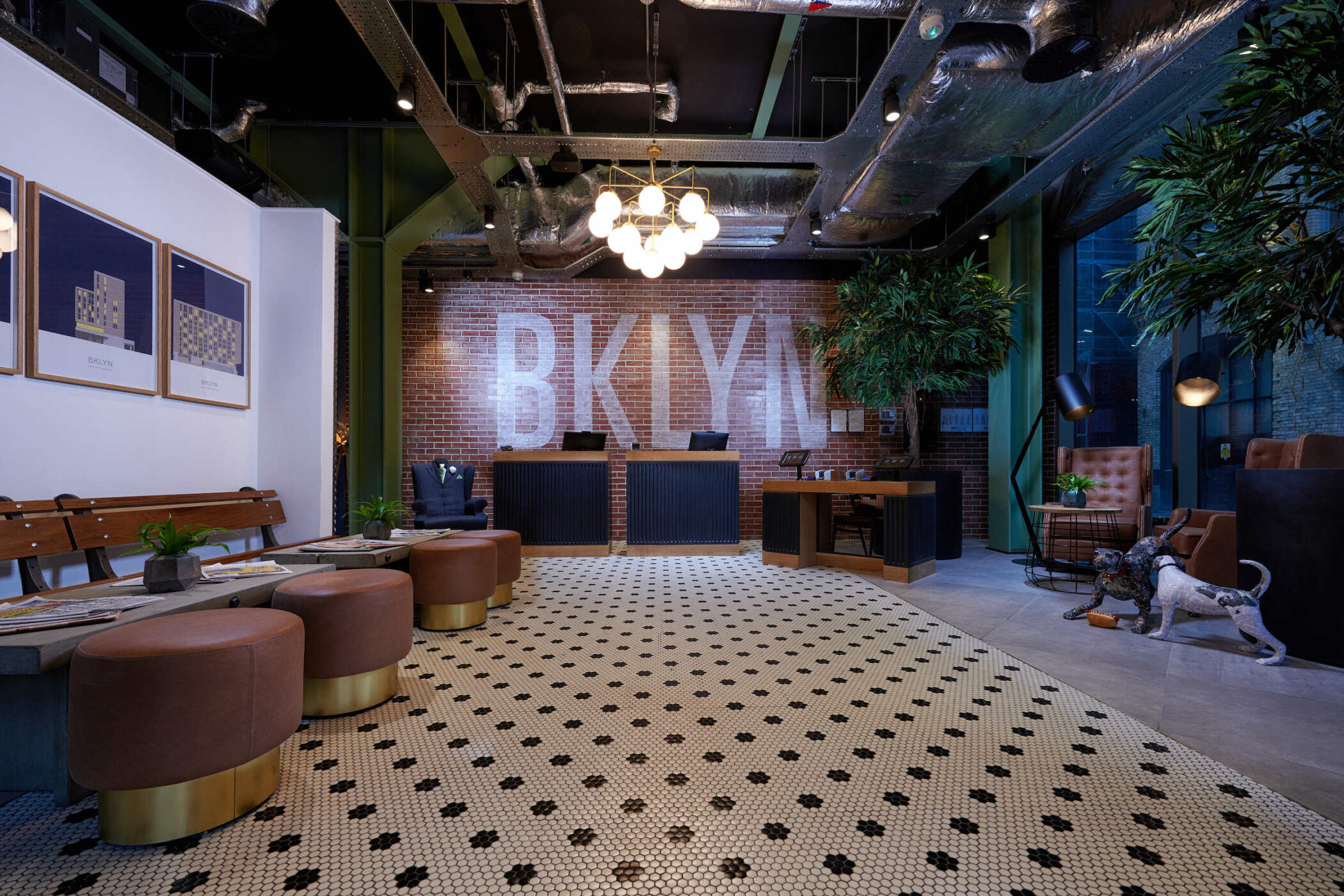 Upstairs, in our eight-floor “city suite”, first impressions are fab. The room is compact but spotless and well designed, and we love the big views over the city, which, shrouded in signature Manchester grey, look every inch the brooding movie star.

Hats off to the small but perfectly formed Scandi-style bathroom, too, complete with a powerful shower that’s accessible for operation through a glass porthole, so you don’t have to risk getting wet just to turn it on. 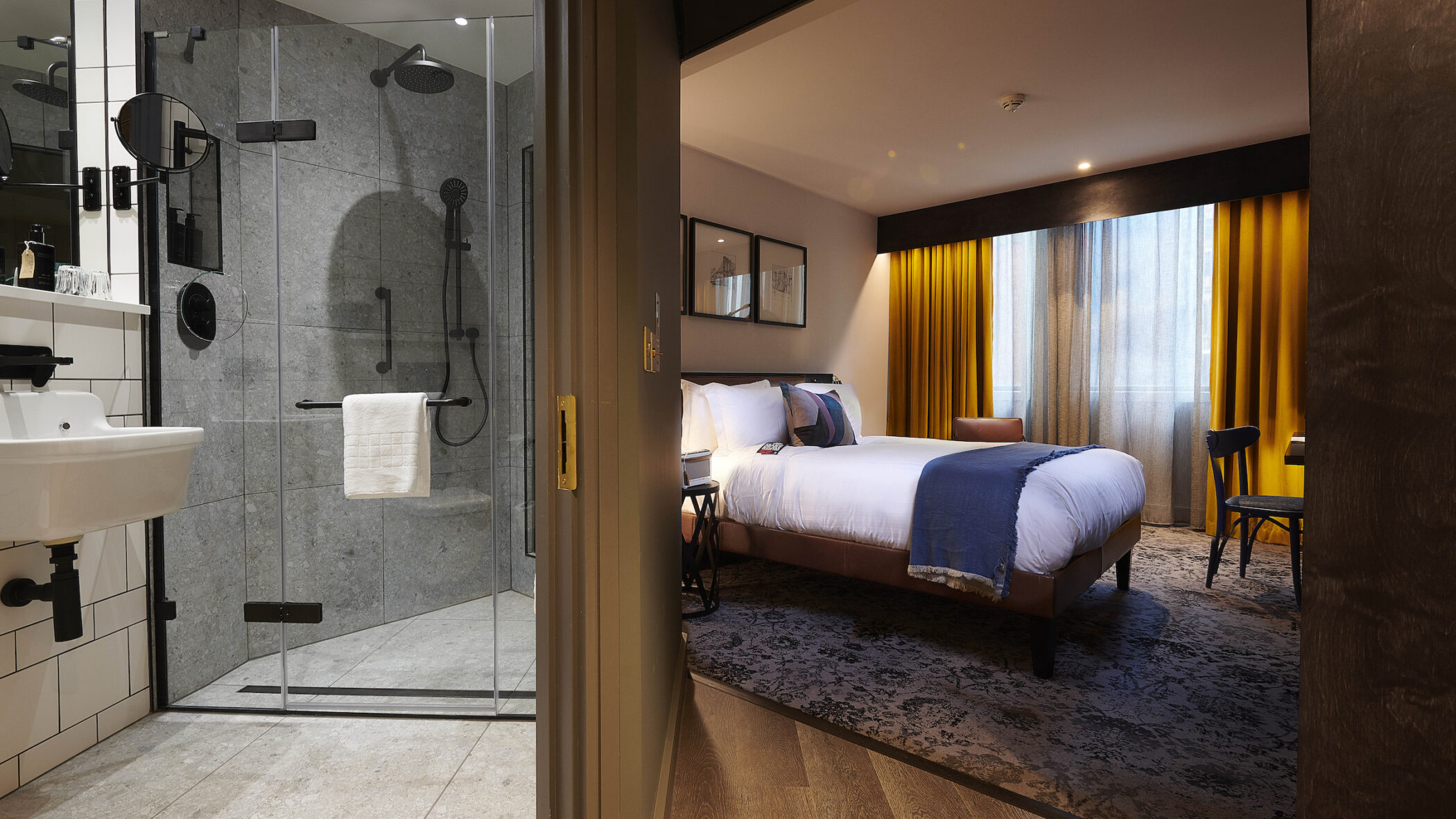 While the styling is modern and slick, there’s not much in the way of impactful décor, and just a few accessories to note. These include a tea and coffee station, a retro-inspired radio and a flat screen tele, both wearing labels marked “for sale” (a subtle warning against going rock star in the room or leaving with the amenities?) and a few classic paperback novels. I don’t get the impression many people come to the Hotel Brooklyn for a read, but I appreciate the thought.

A cute brown paper bag containing some welcome snacks make a playful take on the minibar set up and hint at this hotel’s reputation as a party pad: there are complimentary chocolate bars, popcorn, a canned gin and tonic and a beer, plus a slice of cake and a bowl of fruit salad. 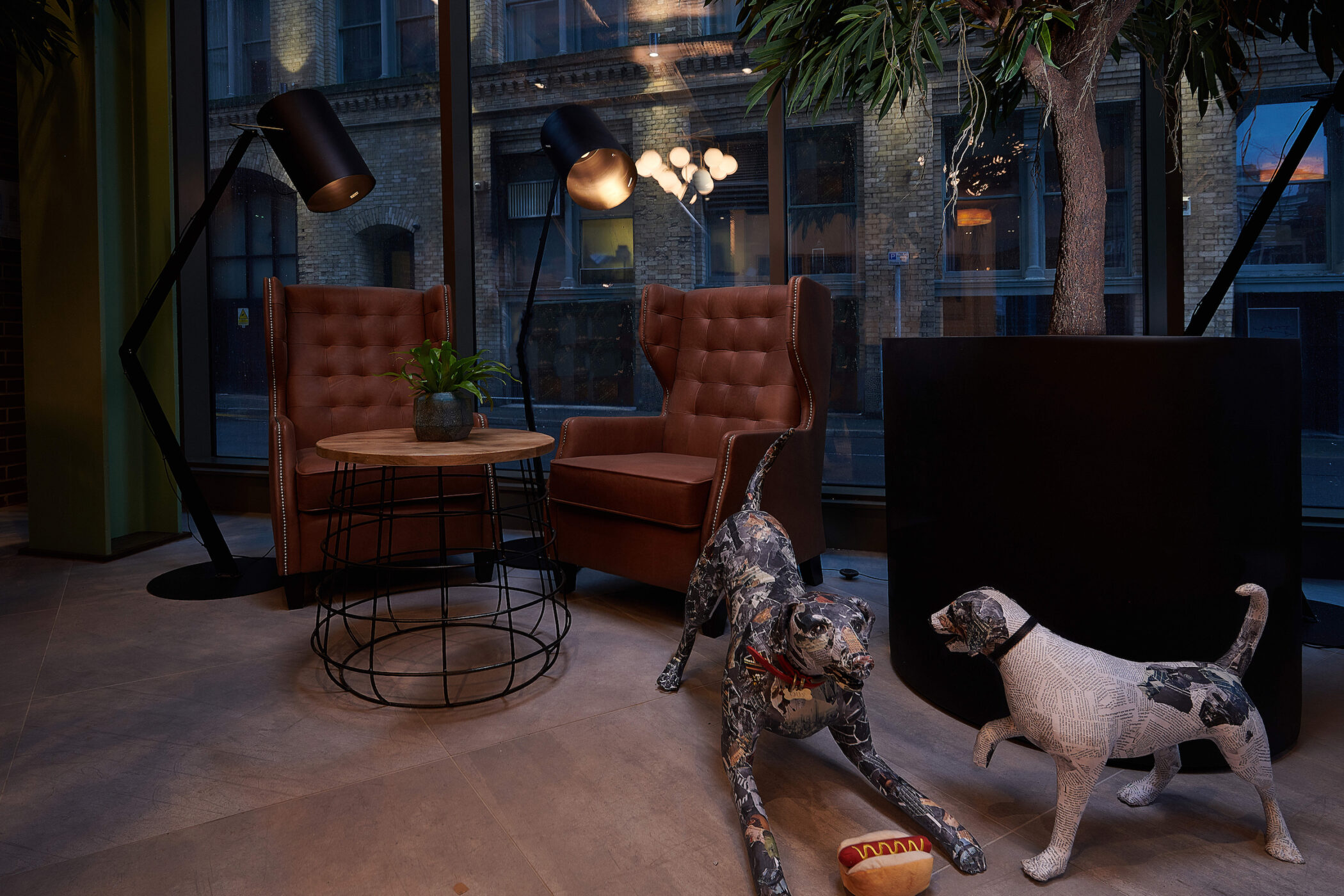 We don the obligatory hotel slippers and robes, crack the bevvies and get set for a night on the town as lights begin to shine through the dark beyond. Every pre-match needs music, and despite the various electronic outlets, there is no speaker nor any bluetooth-compatible tech. Shame.

Special mention must go to the Hotel Brooklyn’s commitment to accessibility, which has been optimised throughout the hotel in association with accessible design specialists, Motionspot. 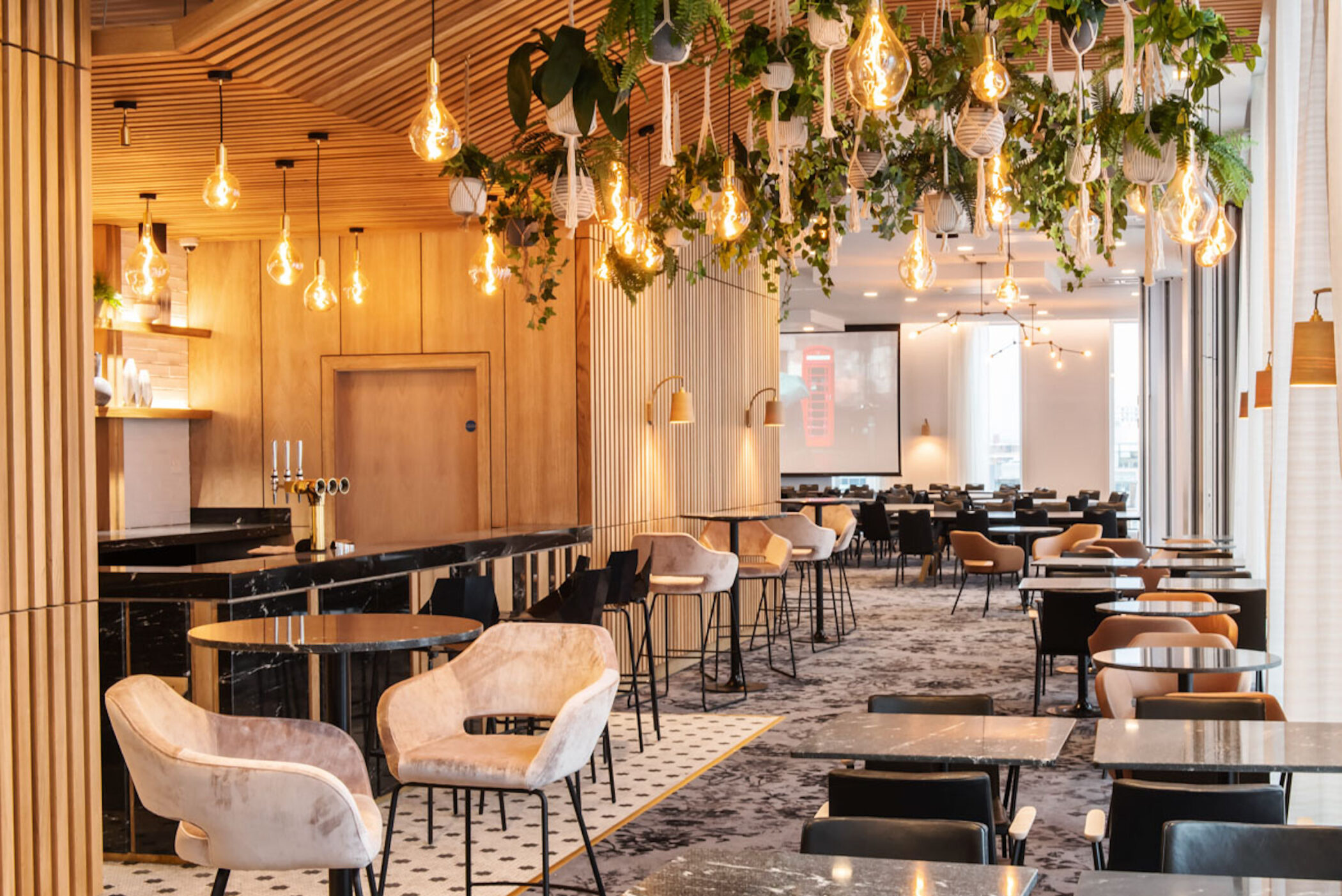 Not only is the hotel the first the UK with fully accessible “Liberty” suites and bedrooms – think 18 consciously adapted rooms and public areas and beautifully integrated ceiling track hoists – but all duty staff is trained in a range of skills to support guests with additional physical, cognitive and sensory needs.

(When you consider that an estimated 1.3 billion people – or one in six people worldwide – experience a significant disability, it seems extraordinary that other hotels aren’t paying more attention to accessibility.)

If you’re after an all-day bite, Runyon’s, is an option. Named after the American writer Damon Runyon, the restaurant looks a little forlorn on our visit. Bereft of punters and decked out in Christmas décor (it’s mid-November), Runyon’s is more diner than “destination dining”. 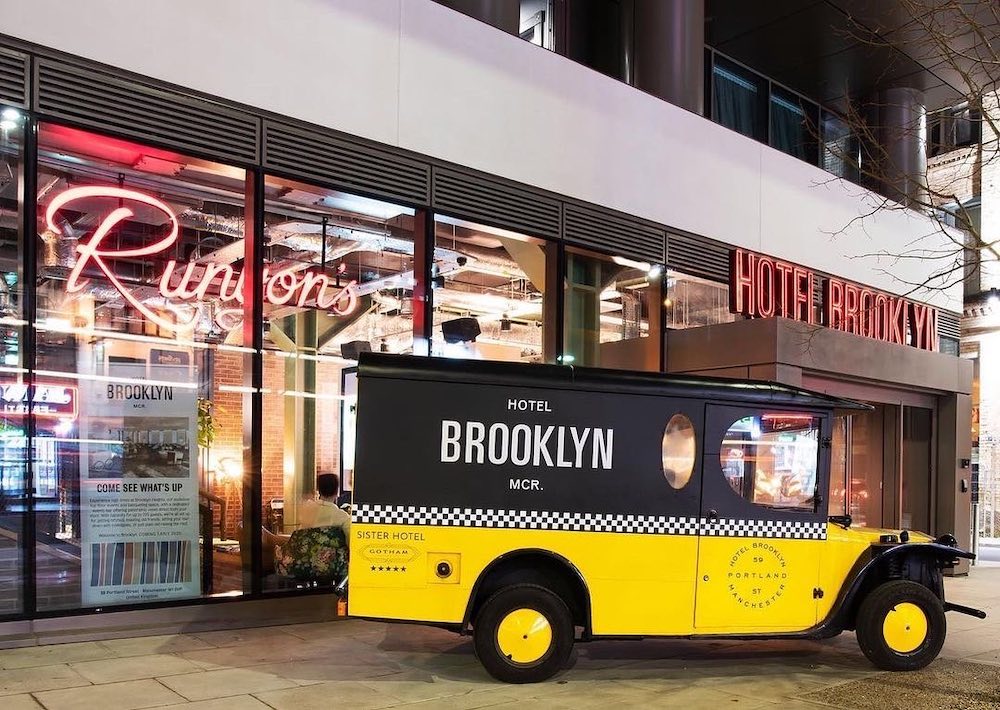 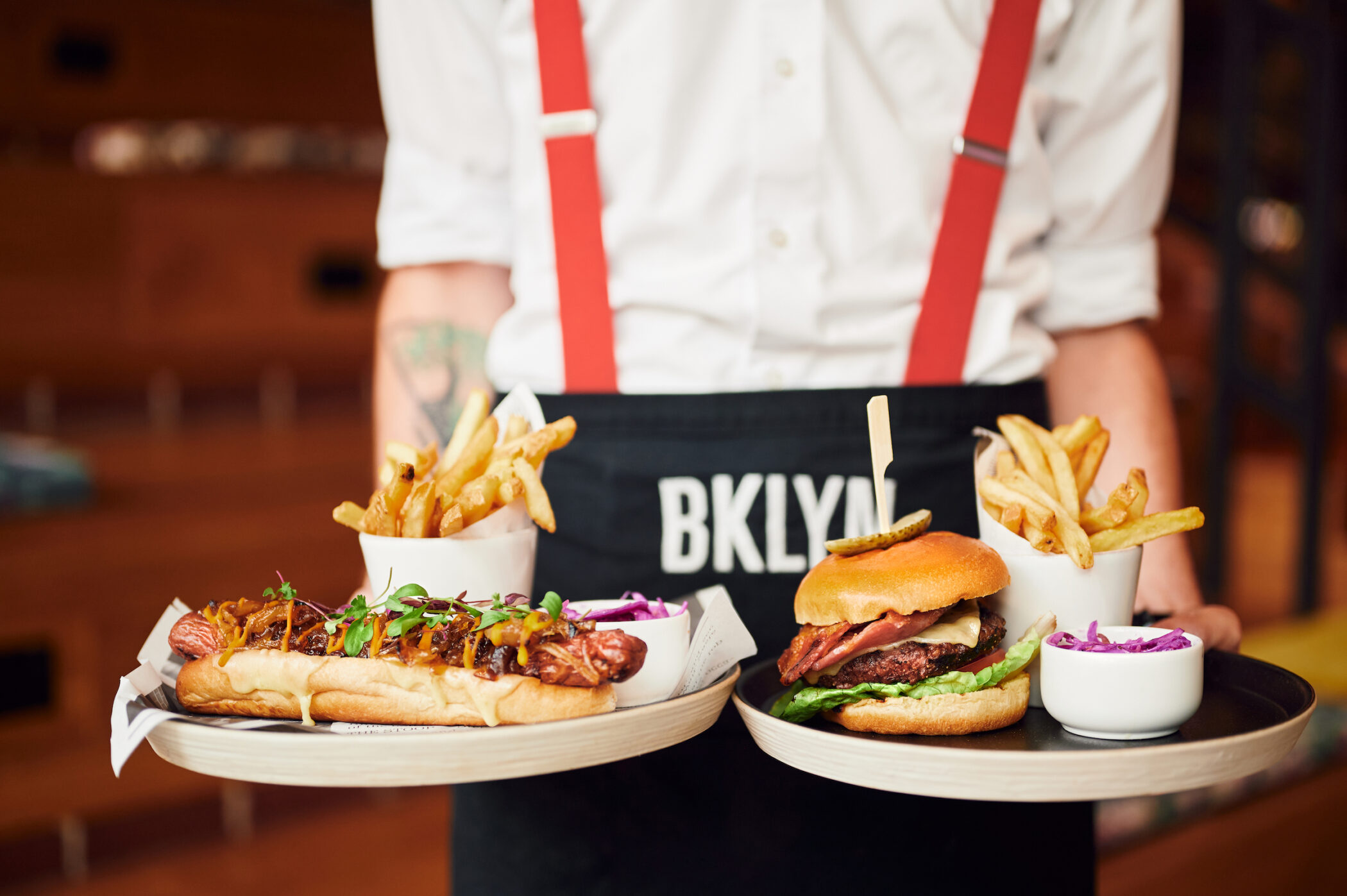 What’s on the menu? Expect “much-loved British classics with a sprinkling of Big Apple swagger” – with favourites such as fish and chips, burgers, pulled pork tacos and hot dogs all making an appearance. Dinner serves up fancier cuts of steak, such as chateaubriand for two with a choice of sauce.

Our meal takes forever to arrive but the helpful servers, dressed in jolly red braces, cannot be faulted. The wait is a buzzkill, especially given we are the only people eating: New York pace, this ain’t. When the steak and eggs finally does turn up, the protein is crying out for some caramelisation and stewing in a puddle of its own grey juices, crowned by two cheery poached eggs and a tangle of watercress. 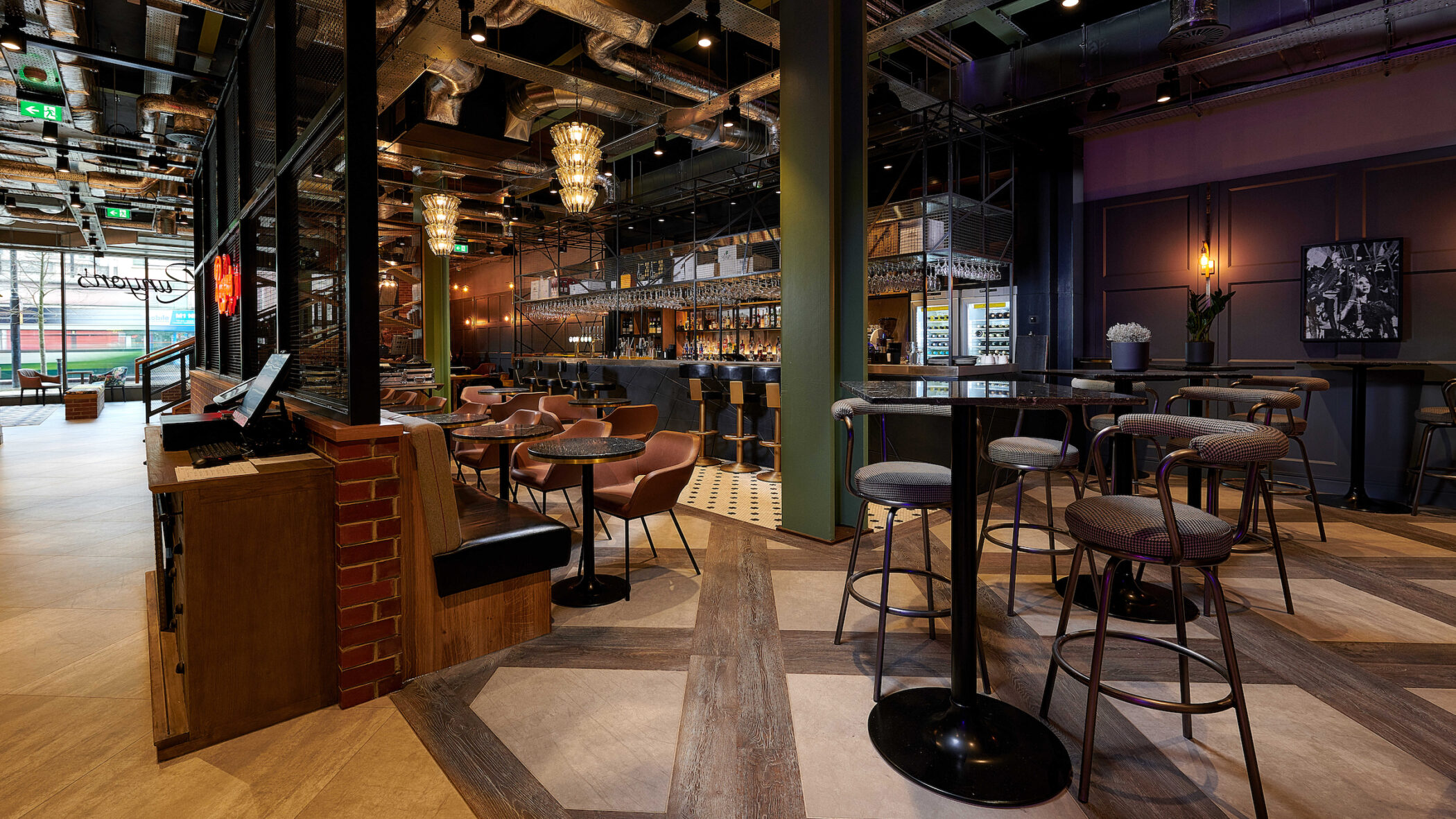 In all fairness it tastes better than it looks. Sadly, the cannot be said for the “superfood” salad, an assortment of limp veggies that appear to have had the vitamins sucked out of them. Thank heavens for dessert.

Runyon’s is all out of Nutella doughnuts so we try the “fried apple sandwich” with whipped cream. An upgraded version of McDonalds’ classic apple fritter, it’s the perfect padding before we slip into the night.

Hotel Brooklyn might want to transport its guests to NYC but there’s more than enough to enjoy about this place… for today only, I’ll take Manchester over the Big Apple. The prices are great too – with rates from about £100 per night.