REVIEW: The Ace Hotel Brooklyn is a ‘masterclass in placemaking’

Opened last year, the Ace Brooklyn is the epitome of a 21st-century, ‘affordable luxury’ lifestyle hotel that is particularly attractive to Millennials. Lotte Jeffs reports

In these days of gentrification, there’s something to be said for discovering an area before it has become too slick and contrived. The Ace Hotel in Boerum Hill, downtown Brooklyn is certainly at the vanguard of an up-and-coming district. But far from plonking itself down in the middle and waiting for the environs to catch up to its trendiness, this hotel is working with the local community to be an authentic addition to it.

Inspiration for the design of the property (Primitive Modernism’s Roman and Williams) came from the unpolished elegance of artist’s studios and workspaces – earthy, rough-hewn canvas, lots of light and warmth, exuding a busy, creative feel. The entrance is uniquely welcoming but not in a stuffy, hospitality kind of way. There’s outdoor tables and the adjacent Black Seed Bagels (the best in the city, try the veggie on everything) provides an extra buzz, especially in the early mornings where local residents, on their way to work or fresh from a hot yoga class at Tangerine Studios opposite, grab coffee and breakfast.

This is an example of a designer’s vision working as intended but in a natural way, as if it had been here all along. So integral to the hotel’s placemaking is its entryway that it has a name the Stoop (a nod to the social significance of the surrounding brownstone’s steps) and was it was intended for “casual congregation”. Central to it is a custom ceramic mural crafted by iconic modernist Stan Bitters, coupled with a sculptural light installation designed by Roman and Williams in homage to the Hotel Okura in Tokyo an iconic modernist property designed by Yoshiro Taniguchi, and demolished in 2015.

Once inside the lobby, the reception desk feels almost incidental to the rest of the space which when I checked in at midday on a Thursday was buzzing with people working from a big shared table or taking lunch meetings in the chic seating areas or out in the urban garden.

Rooms at the Ace Hotel Brooklyn were inspired by Le Corbusier’s beloved workspace retreat Le Cabanon, and indeed a spirit of creative refuge is achieved in the hand crafted soft furnishings and minimalist fixtures. 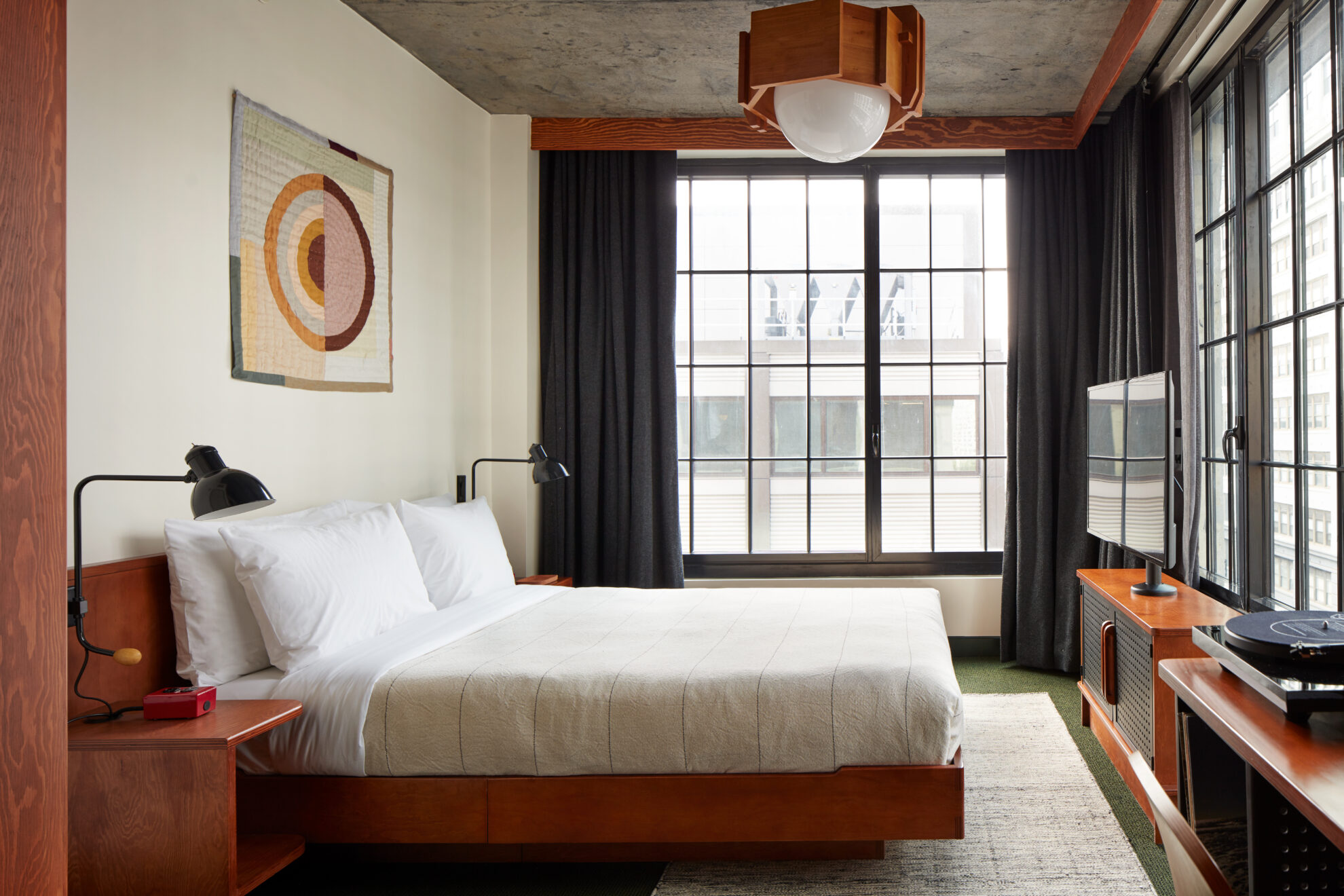 The cement tiling in the bathrooms feels just edgy enough, while the uber comfortable bed and Mad Men esqe mahogany set agents sage green carpeted floors brought the lux. My room was on the tenth floor and I had the most incredible views through floor-to-ceiling panoramic windows out over the Hudson river and the city rooftops. 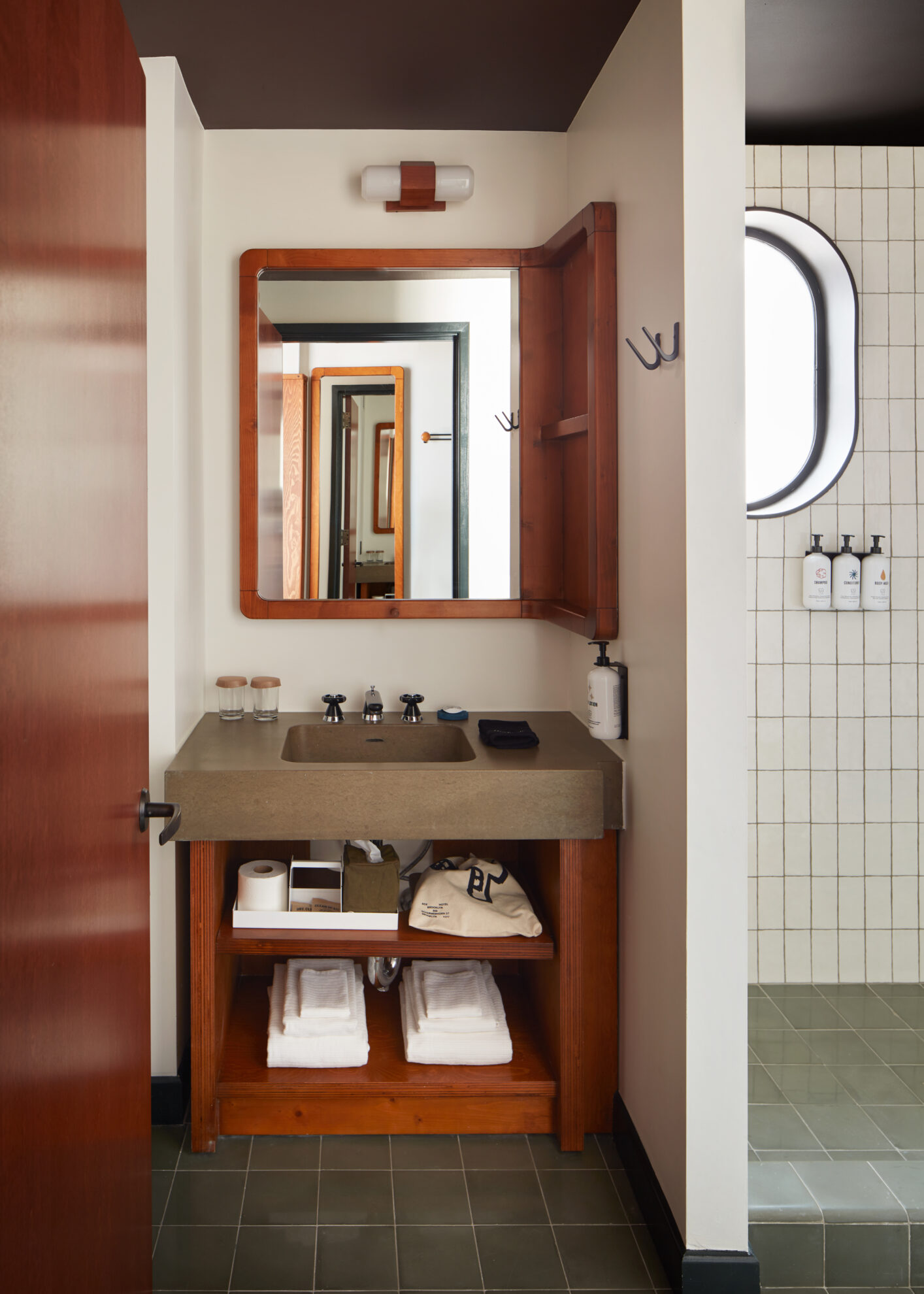 There were bottles of premade cocktails in the SMEG minibar and a record player with a selection of vinyl to play. There are also custom bathrobes from Wings+Horns and organic, biodegradable and sustainable latex mattresses. I invited an artist friend to join me for dinner at the restaurant As You Are. We started with Negronis (me) and Sidecars (him) at the bar while the DJ played an eclectic selection of hip hop and soul. Service in the restaurant was excellent. I enjoyed brussel sprouts in gribiche sauce to start followed by a delicious Bucanti in tomato confit. We admired the mosaic by artist Isaiah Zager on the opposite wall. There’s also a gym, and a gallery space in the lobby where rotating exhibitions explore fine art, fashion, literature, science and technology. Add to this the Atrium and Studio events spaces plus a demo kitchen for culinary workshops and special events and the Ace Brooklyn is a masterclass in thriving, creative placemaking with a real honest warmth at its heart. If you want to stay somewhere beyond the obvious next time you visit New York, there’s nowhere better.

As a brand, the Ace is expanding – most recently it opened hotels in Toronto (summer 2022) and Sydney (early 2022). A stay in an entry-level Small room at the Ace Hotel Brooklyn costs from US$199.