Virgin Atlantic has updated its gender identity policy to allow male cabin crew and pilots to wear skirts and heels, and females to wear suits – if they so choose. Jenny Southan reports

In a revolutionary move, Virgin Atlantic has further relaxed its uniform policy for airline pilots, crew and ground team to allow them to choose which of the airline’s iconic uniforms, designed by Vivienne Westwood, best represents them – no matter their gender, gender identity, or gender expression.

Reflecting the diversity of its workforce and solidifying Virgin Atlantic’s position as the most inclusive airline in the skies, LGBTQ+ staff will be able to choose either a red or a burgundy uniform. 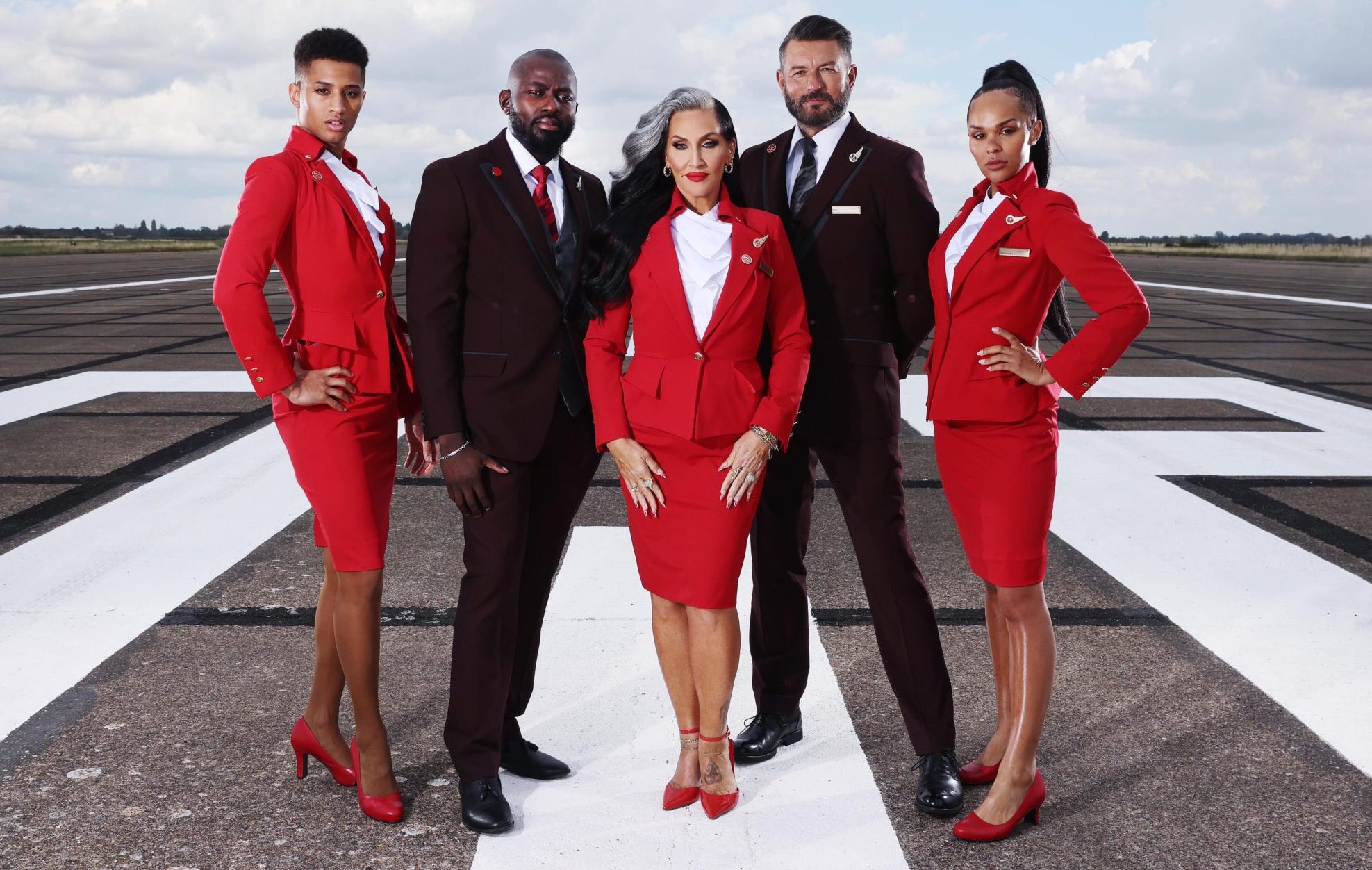 Effective from now onwards, the decision champions the individuality of Virgin Atlantic’s people by enabling them to wear the clothing that expresses how they identify or present themselves. This follows previous changes including optional make up and allowing visible tattoos for crew members and its front-line people.

Not just for people who identify as male or female, Jaime Forsstrom (pictured far left, below), a member of cabin crew at Virgin Atlantic, says: “The updated gender identity policy is so important to me. As a non-binary person, it allows me to be myself at work and have the choice in what uniform I wear.” 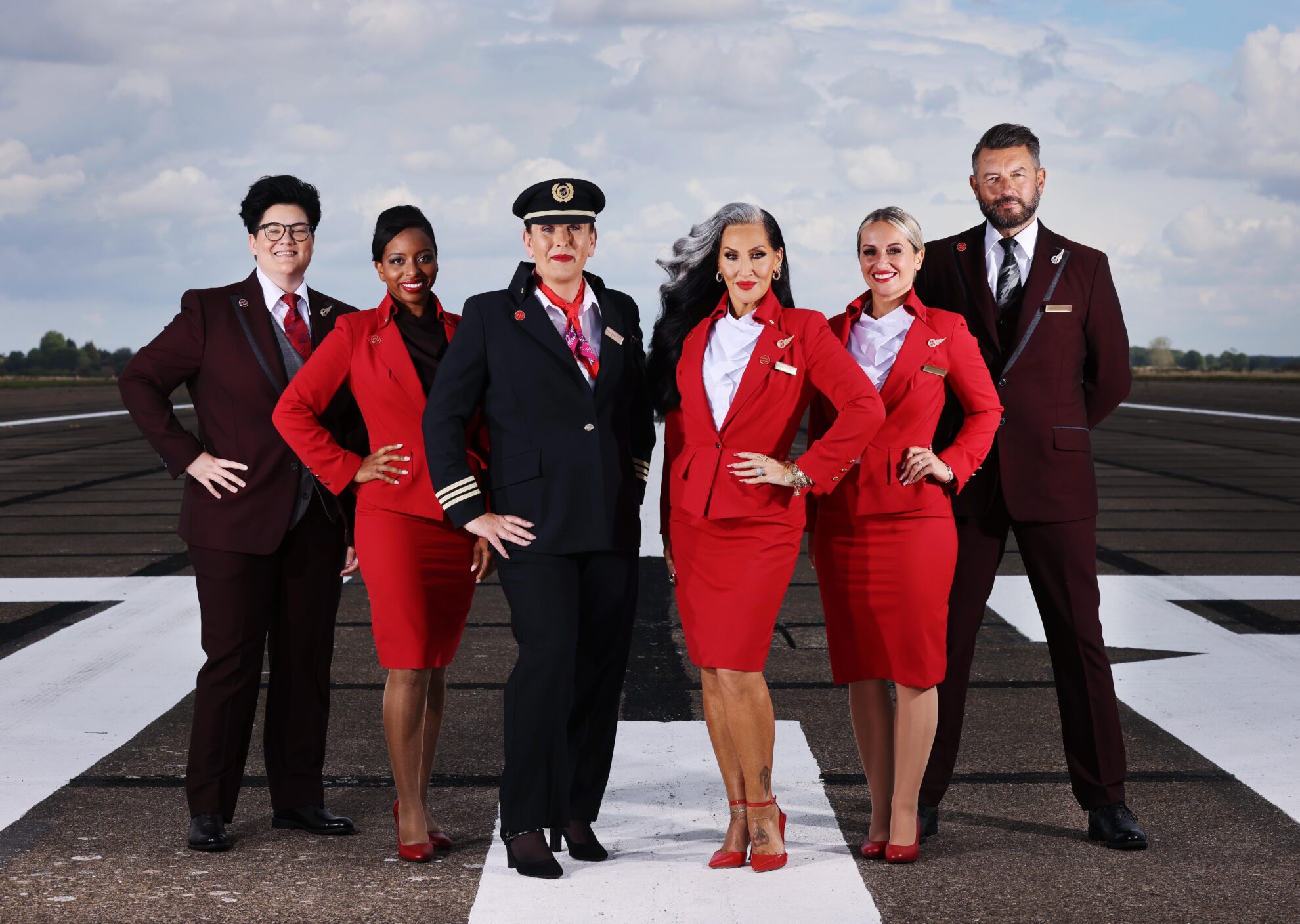 In addition to the non-gendered uniform policy, wider updates include the mandatory inclusivity training for staff, in-destination training with tourism and hotel partners, and optional pronoun badges.

The idea is that the badges will allow wearers to clearly communicate and be addressed by their preferred pronouns (she/her, he/him, they). Not just for staff, customers will be able to ask for one at check-in or in the Virgin Atlantic Clubhouse, too.

Virgin Atlantic has also updated its ticketing systems to allow for those who hold passports with gender neutral gender markers to select “U” or “X” gender codes on their booking, as well as the gender-neutral title, “Mx”. 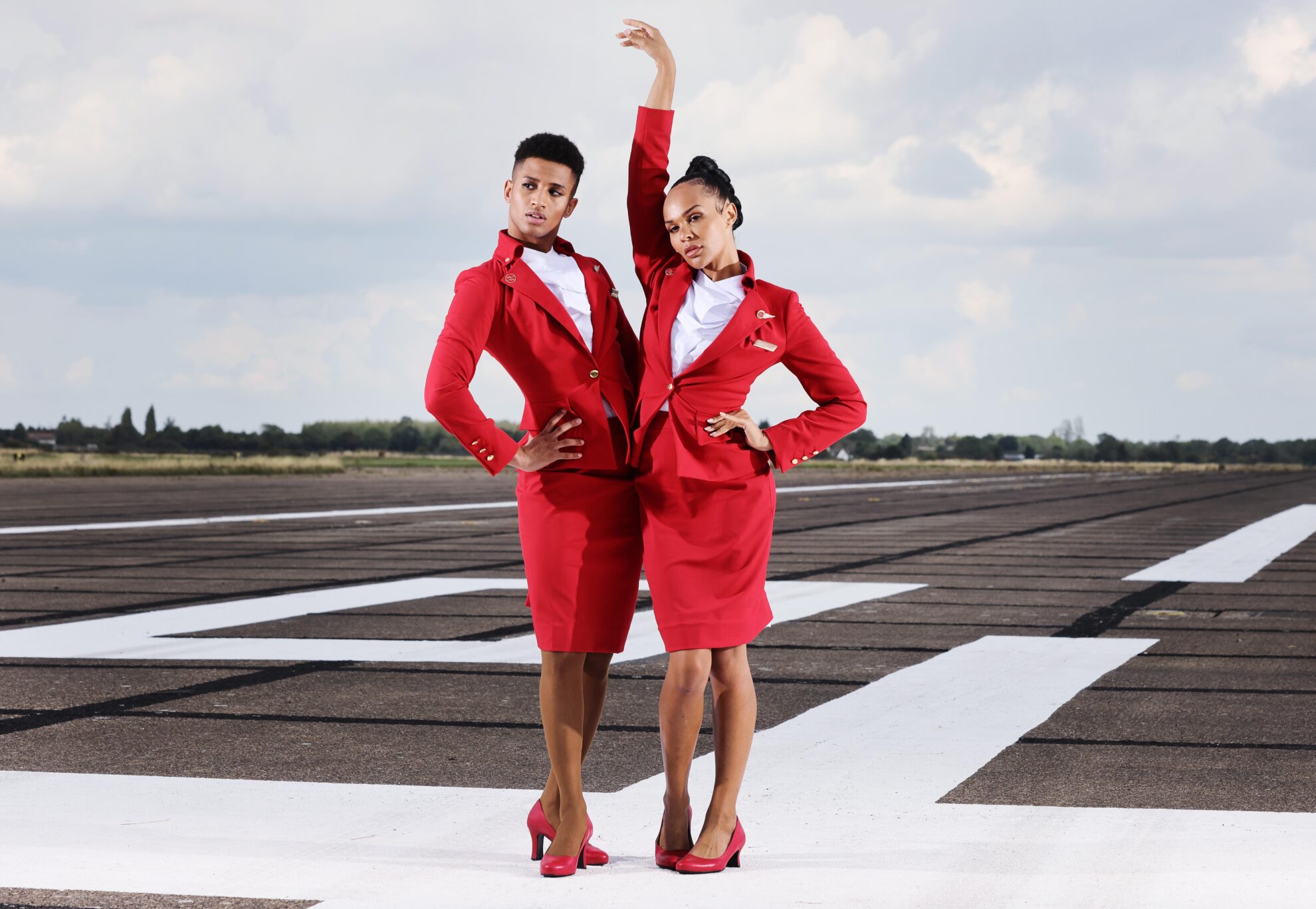 Currently, citizens from a small number of countries including the US, India and Pakistan, are able to hold these passports and travellers must travel on the codes that match their passport.

In lieu of passports with gender-neutral gender markers being available for all, Virgin Atlantic is implementing a longer-term plan to amend communication preferences to ensure customers are addressed by their preferred pronouns across all touchpoints.

Mandatory inclusivity training will also be rolled out for its people at all levels across Virgin Atlantic and Virgin Atlantic Holidays as well as a series of inclusivity learning initiatives for tourism partners and hotels within destinations such as the Caribbean to ensure all our customers feel welcome despite barriers to LGBTQ+ equality. 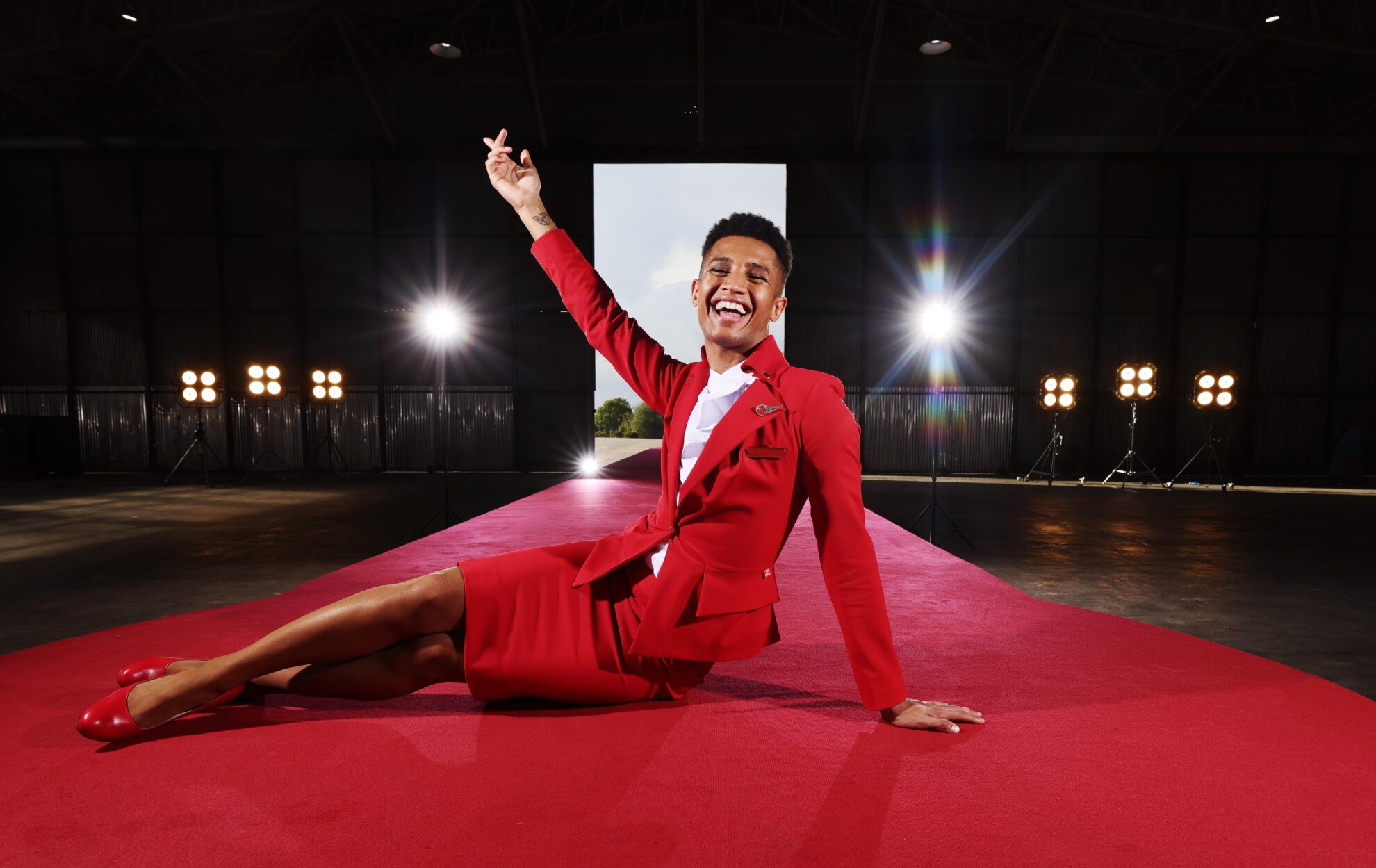 Launched as part of its “Be Yourself” agenda, the airline has already unveiled a series of industry-leading inclusivity initiatives for its people to ensure they can truly be themselves at work and feel comfortable in their roles. This latest addition follows a decision in 2019 to offer cabin crew the choice whether to wear make-up as well as the option to wear trousers and flat shoes.

TV personality Michelle Visage, British youth worker and LGBT rights activist Tanya Compas, model and influencer Talulah-Eve and Non-Binary performer and activist Tyreece Nye have teamed up with Virgin Atlantic to showcase the new policy in a stylised fashion shoot, with images displayed in this story. 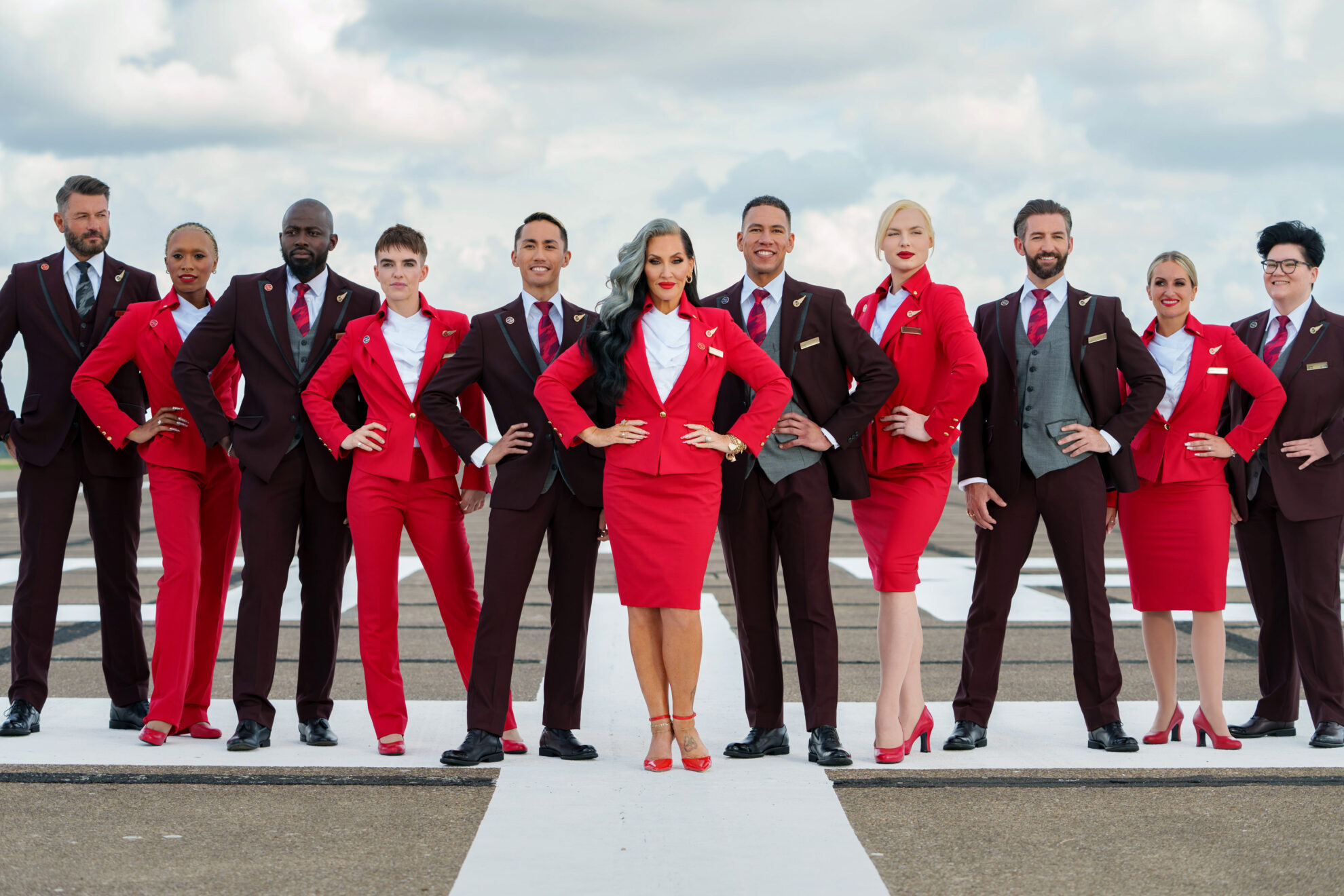 Visage says: “As the mother of a non-binary child, and as an ally to the LGBTQ+ community, these efforts by Virgin Atlantic to further inclusivity for its people are extremely important and personal to me. People feel empowered when they are wearing what best represents them, and this gender identity policy allows people to embrace who they are and bring their full selves to work.”

The announcement comes as research commissioned by the airline finds that enabling employees to express their true selves at work boosts happiness (65 per cent), increases mental wellbeing (49 per cent), creates a more positive workplace culture (36 per cent) and provides a better experience for customers (24 per cent).

Employees also reported feeling more accepted and comfortable when able to be their true selves at work (26%) and an increased sense of loyalty to their employer (21 per cent).

Despite these positive benefits, 25 per cent of Brits have felt pressure to hide their true selves at work, with 13% feeling uncomfortable making requests that enable them to express who they really are.

Brits have dressed differently (30 per cent) or in clothing they aren’t comfortable in (15 per cent), changed the way they style their hair or makeup (22 per cent) and covered up parts of their personality (38 per cent) all in an attempt to fit in. 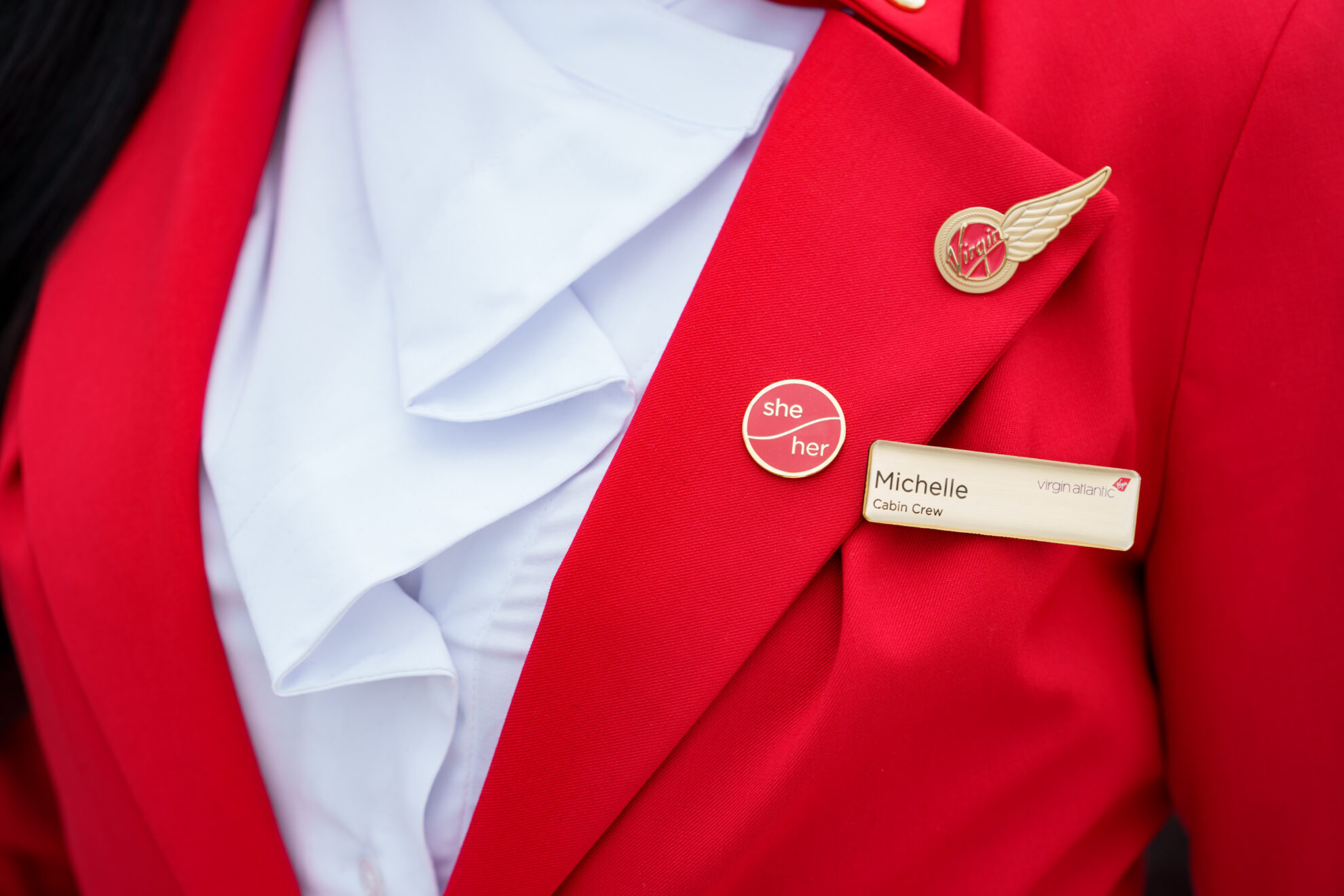 The airline’s initiatives also include an update of its existing trans inclusion policies, which already allows time off for medical treatments related to gender transition, personal choice of changing and shower facilities that align with the gender a person identifies as and co-creation of a personalised transitioning plan.

Juha Jarvinen, Virgin Atlantic’s chief commercial officer, says: “At Virgin Atlantic, we believe that everyone can take on the world, no matter who they are. That’s why it’s so important that we enable our people to embrace their individuality and be their true selves at work. It is for that reason that we want to allow our people to wear the uniform that best suits them and how they identify and ensure our customers are addressed by their preferred pronouns.”