A stylish lounge, free-flowing champagne and an Upper Class seat that has stood the test of time, Virgin Atlantic continues to impress. Jenny Southan reports

As we predicted in our 2022 Travel Trend Forecast, Long-Haul Revival has become a major travel trend, with many people around the world finally able to book long-distance flights with minimal restrictions. Although Covid-19 has not disappeared (in fact, in many never be eliminated), we have now entered the “post-pandemic era” that we have been looking forward to.

During the last couple of years I have managed to travel overseas a number of times but only on short-haul trips within Europe. This week I found myself head to the British Virgin Islands from London via Antigua, with my outbound flight booked with Virgin Atlantic. (On the return I will be flying with American Airlines via San Juan and Miami.)

I was due to travel with Virgin Atlantic on June 21, the day when London experienced its worst rail strikes in 30 years so instead of trying to get a taxi and travel from east to west during grid-locked traffic, I booked a stay in an airport hotel the night before.

I paid £250 to stay in Marriott’s trendy Moxy Heathrow Airport hotel, which is ten minutes by public bus to LHR Terminal 3. Although it was expensive, I was pleased to pay the money for a stay somewhere that wasn’t depressing, as so many airport hotels are (why start a trip feeling glum?) 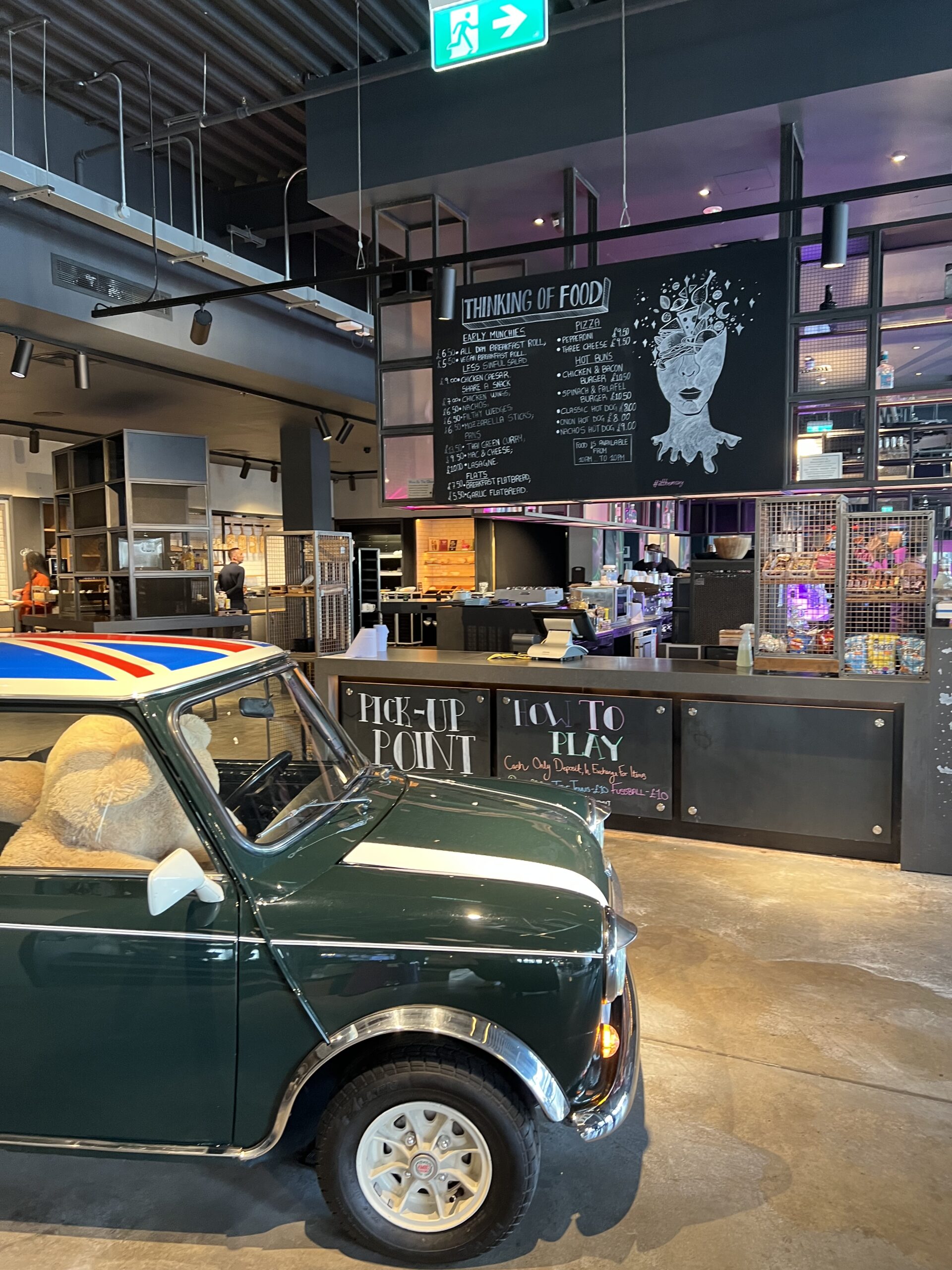 My Virgin Atlantic flight to Antigua was departing at 1210. Due to general airport chaos due to a lack of staff, I knew it would be sensible to arrive at the airport early. There was a long line of people at check-in when I got there at 0845 but it only took about 20 minutes to reach the bag-drop counters.

Whilst waiting, a member of staff asked to see proof of my vaccine status but there was no obligation to show a negative test result or where a mask (almost no one was, not even staff).

I was quickly issued with a boarding pass, my suitcase tagged and instructed that I would need to collect my suitcase in Antigua before checking in with Inter Caribbean Airways for my onward flight to Tortola in the British Virgin Islands (Virgin Atlantic doesn’t have a agreement with them to interline baggage).

At 0905, I head upstairs to security. Here, the queues were terrible – it took over an hour to get airside. Once through, I picked up some bottled water and green juice from Pret, and the headed to the Virgin Atlantic Clubhouse lounge for Upper Class passengers. 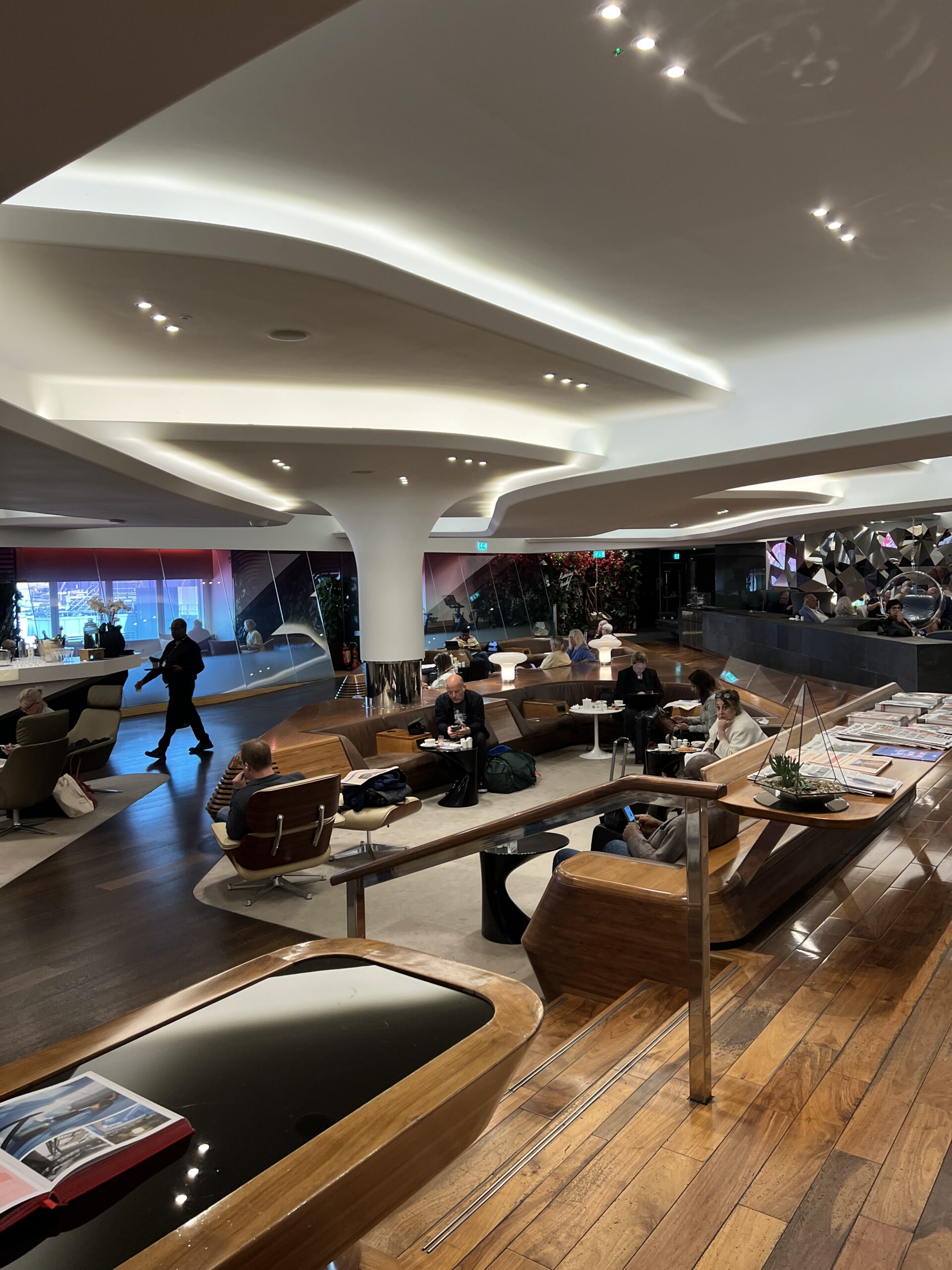 It was a pleasure to be back here after a number of years, and it was nice to see it so busy. There was even the sound of the odd champagne cork popping and it wasn’t even lunchtime.

Features I particularly like about the Virgin Atlantic Clubhouse are the long sit-up cocktail bar facing the runway; the workout zone with Peloton bikes; and the restaurant where you can order free a la carte food. I tried to order food via my phone using a link triggered by scanning a QR code on the table but a waitress whizzed over to take my order personally instead, which seemed more efficient.

There was a good selection of dishes including pancakes, eggs Florentine and full English (I went for the veggie one, which was tasty). They also do a good selection of housemade smoothies. Service was excellent and everyone seemed happy to be there.

Unfortunately, I only had about 40 minutes to enjoy the lounge until I saw that my flight said “Go to gate” at 1115 so I headed out and down to Gate 13, which was about ten minutes away.

Once into the departure area, there was a short wait until Upper Class and then premium economy passengers were called for boarding. Everything was handled very efficiently and a short while after I was getting settled in my seat at the back of the business class cabin (seat 10A). 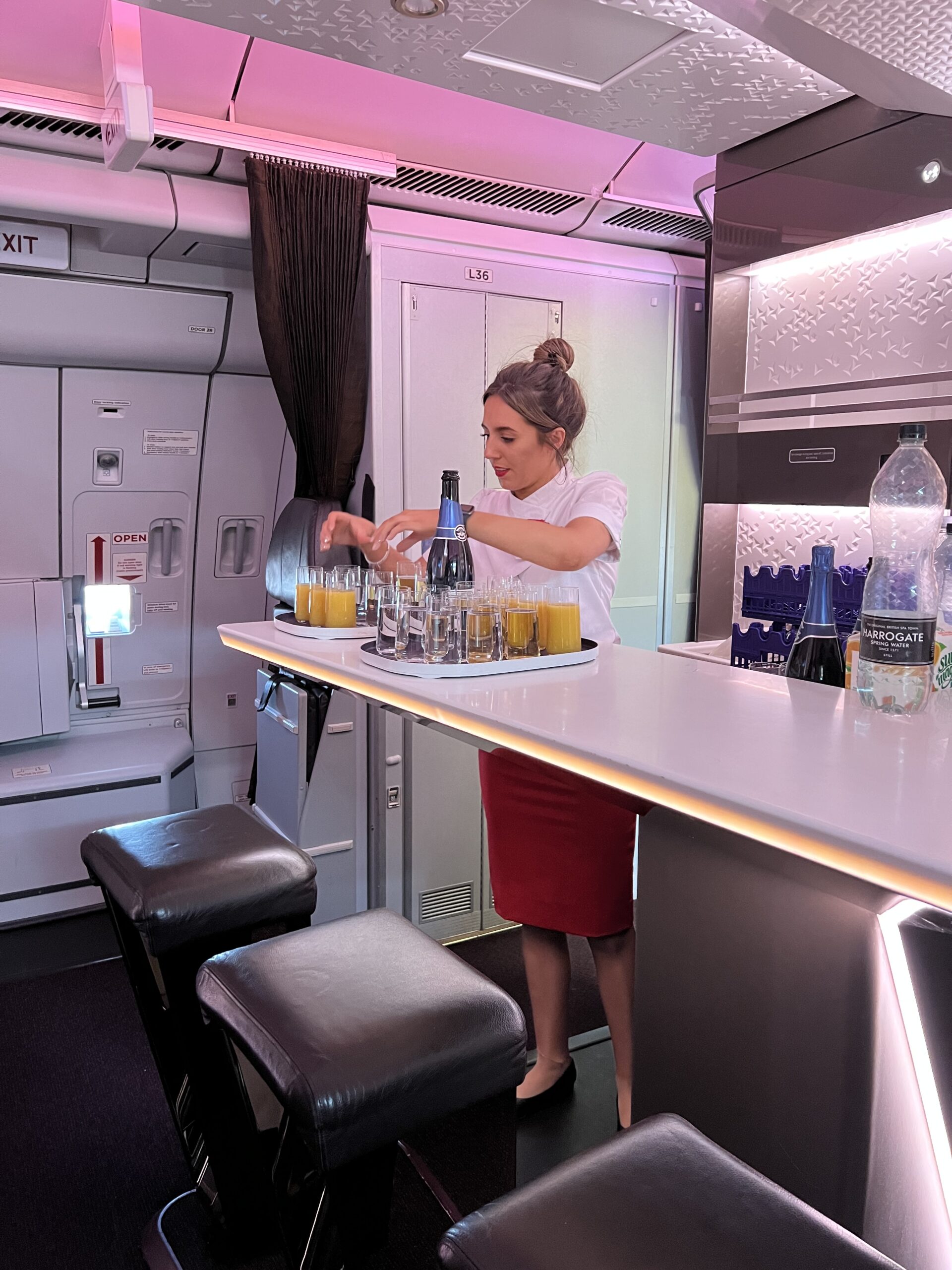 In Upper Class on Virgin Atlantic, every passenger has direct aisle access, which is a benefit, as well as a sense of privacy within their own angled booth. The product may no longer be the most innovative in the sky but it has aged well. The seats didn’t look too worn and everything functioned well. 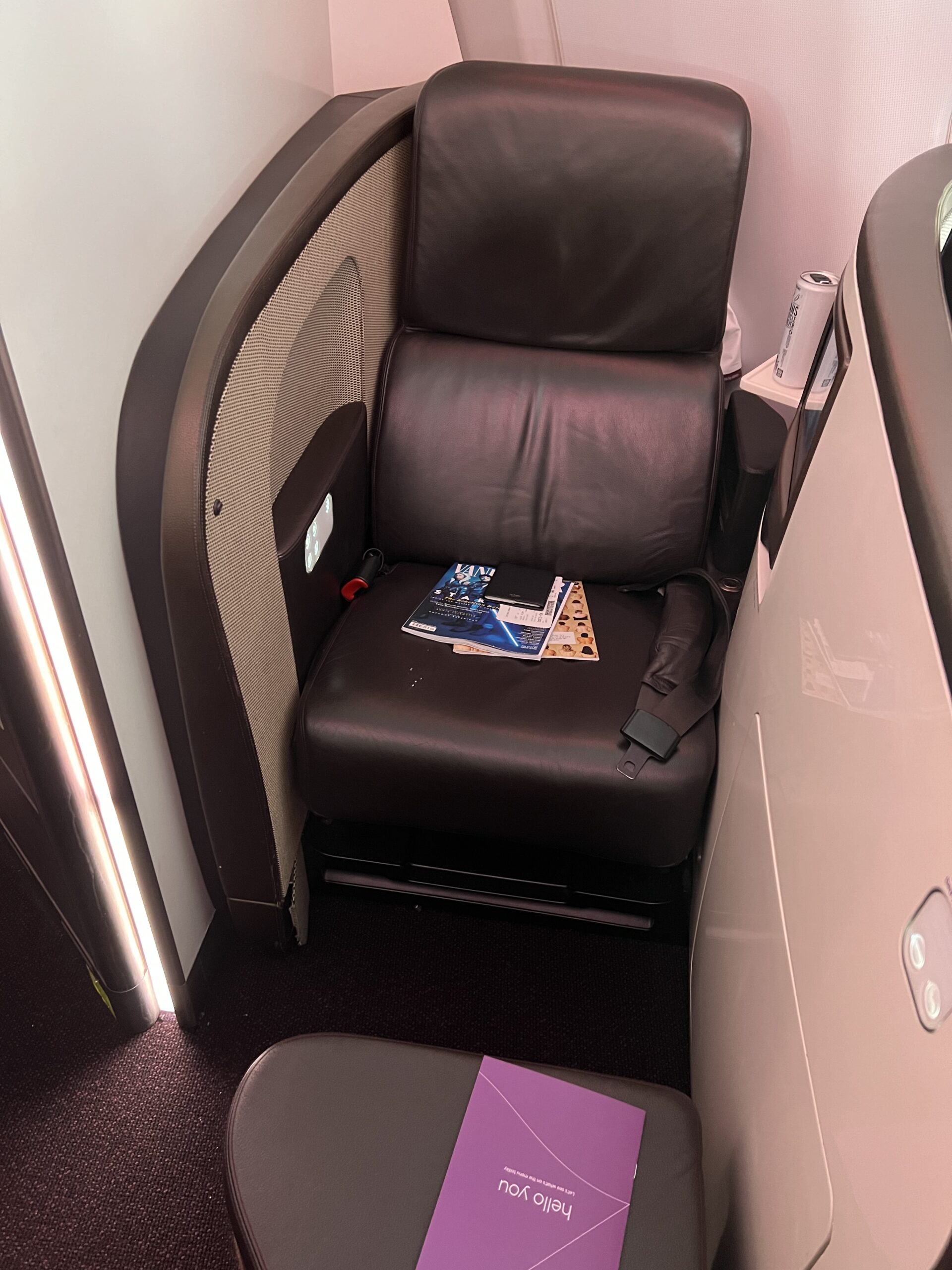 TV screens pop out from a side panel, allowing you to watch movies (of which there was a great selection), while eating from the slide up-and-out table. There was also a UK plug socket for charging phones and laptops.

That said, I tried to pay for wifi at 1600 (£6.99 for one hour) but there was an error and it wouldn’t connect. A member of crew told me it can be a bit patchy but I couldn’t connect at any point during the flight. 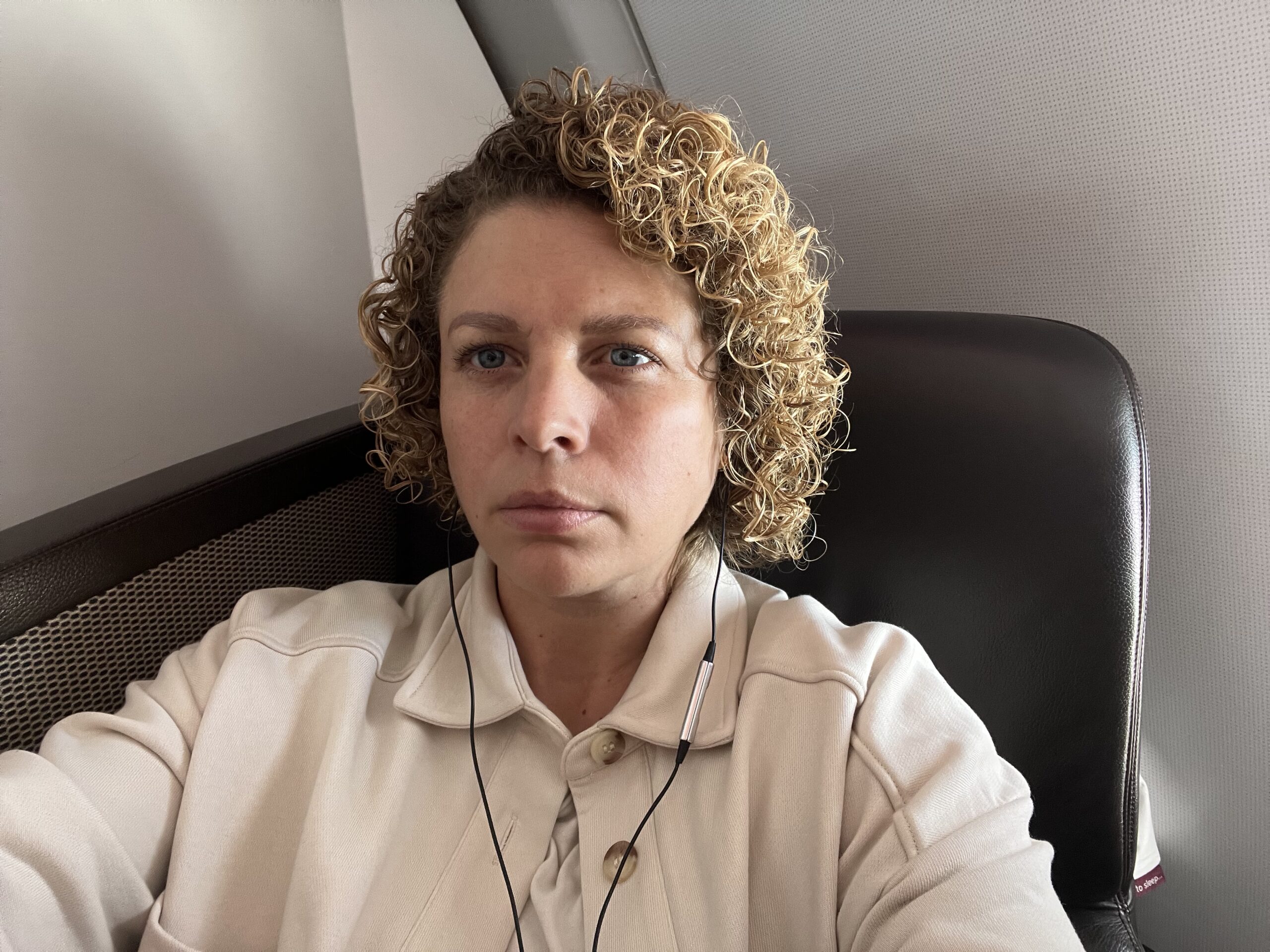 Ayala champagne, water and orange juice was offered as soon as everyone was seated, followed by aperitifs and pretzels once airborne. Neither passengers nor crew had to wear masks onboard, which I was relieved about.

I am triple vaccinated and, frankly, am tired about worrying about catching Covid so was delighted to be able to sit back and relax. I also felt the cabin was well ventilated – the air didn’t smell stale and the temperature was quite cool throughout the journey. 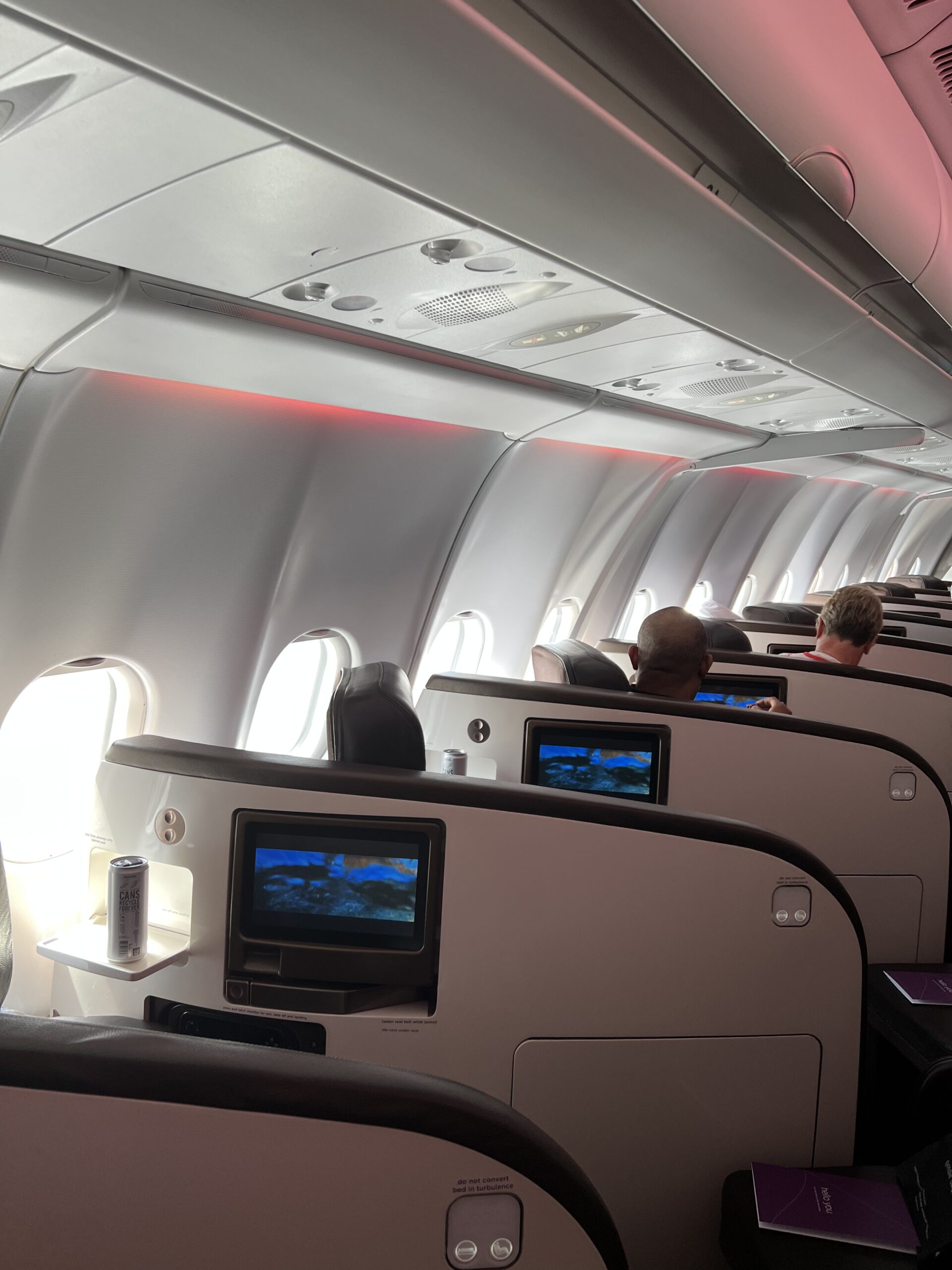 Packing for this long-haul flight, I remembered the benefit of popping a few amenities in an in-flight washbag to make the experience more comfortable (mouthwash, moisturiser, lip balm and an eye mask for sleeping) but Virgin Atlantic provides Upper Class passengers with their own-brand kits for those that need them. 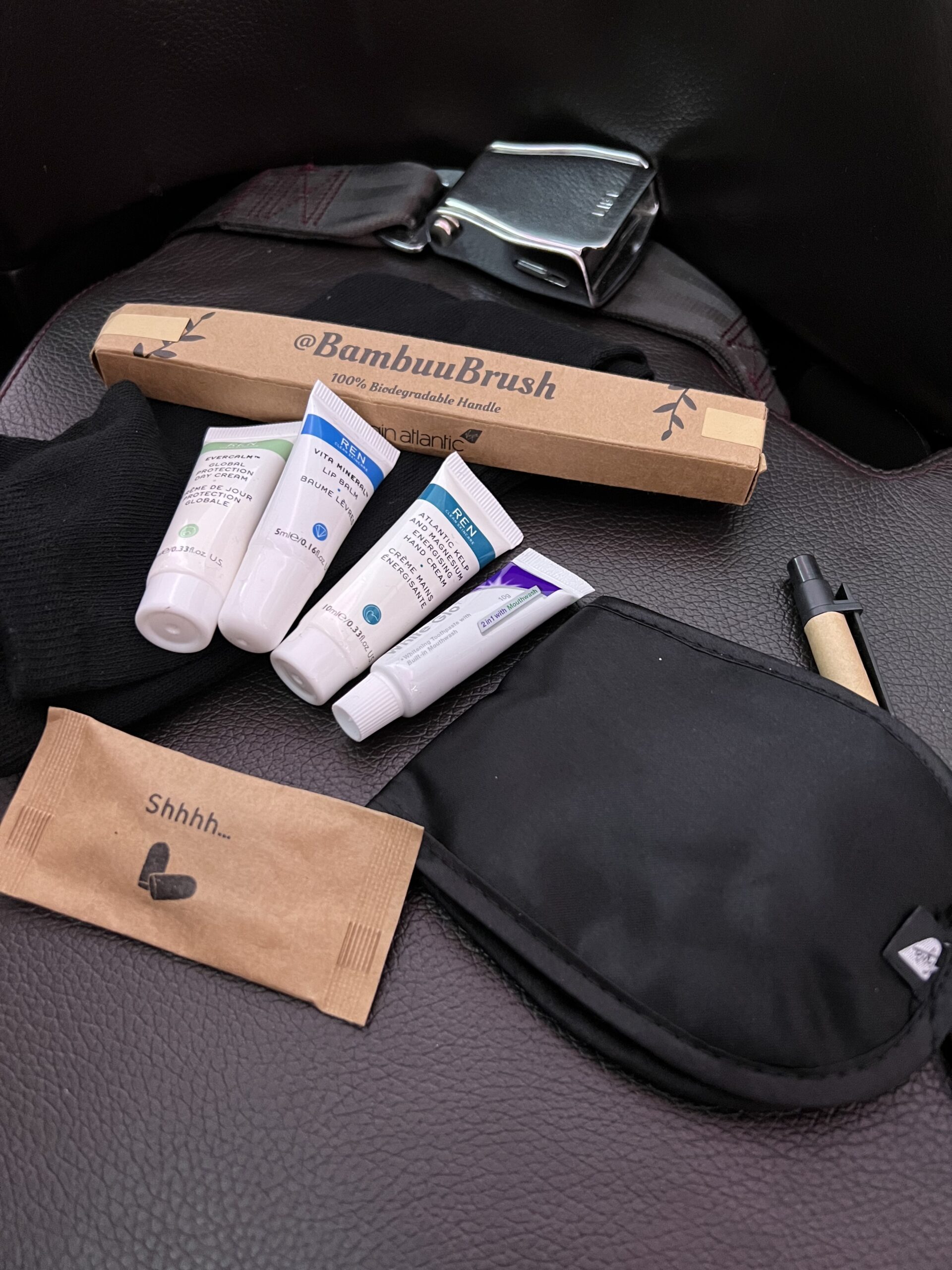 Inside were REN products, socks, an eye mask and a pen. There were no bottles of hand sanitiser, face masks or sanitising wipes provided, though. (I brought my own but in actual fact I didn’t use them – such is the diminishing sense of “germaphobia” these days – a stark contrast to life during the height of the pandemic.)

At about 1300, lunch orders were taken. The starters were of hot smoked salmon with beetroot tartare, and grilled asparagus and artichoke to start. I went for the latter which was very tasty.

The mains were: breaded chicken breast filled with garlic truffle butter; garlic and ginger prawns with Thai green curry; and fig and goat’s cheese tart with Mediterranean roasted vegetables. I chose the tart – although the pastry was soft, it was warming, filling and delicious. 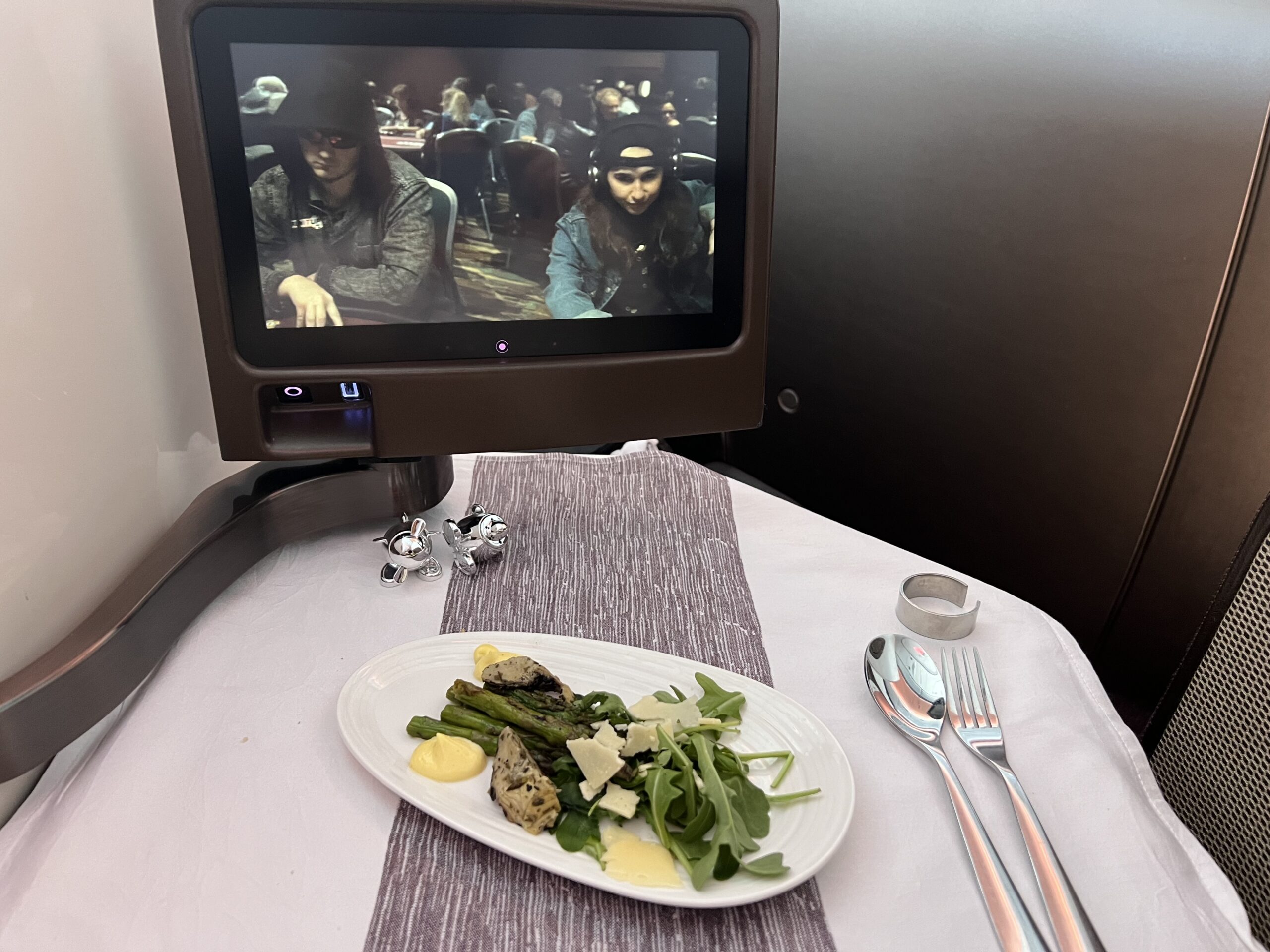 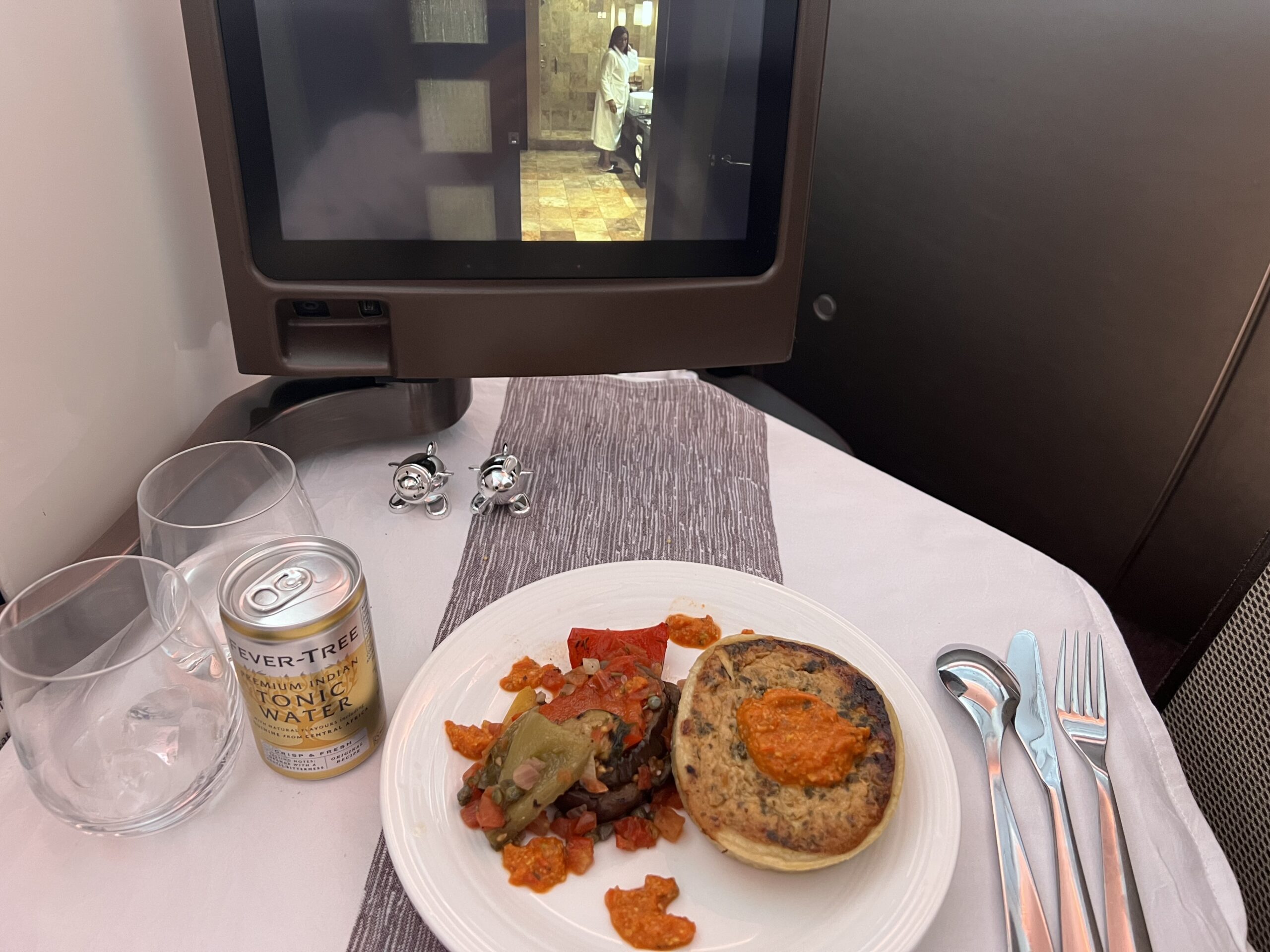 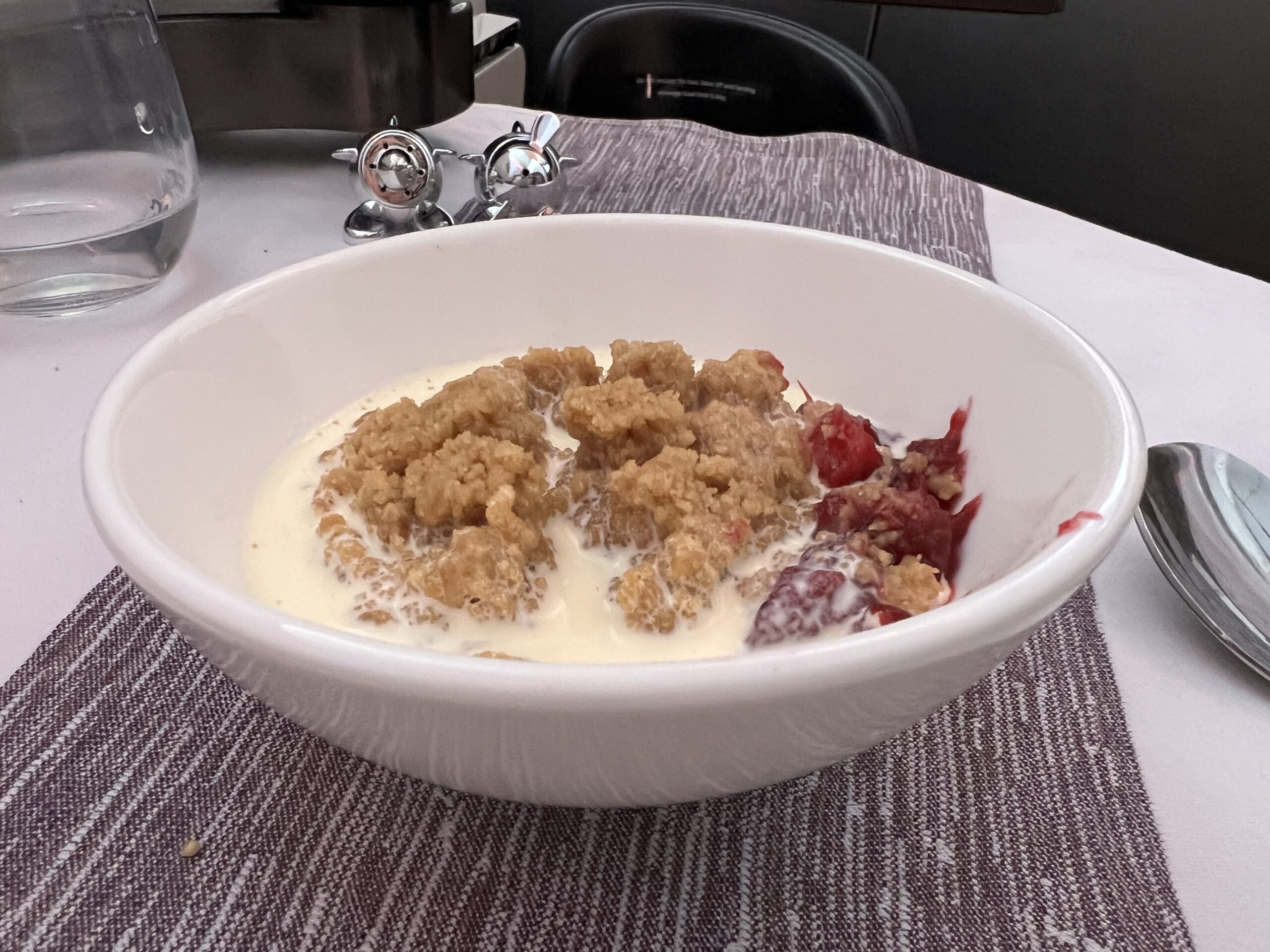 Staff were generous with the drinks, offering wine throughout the meal service, followed by dessert (I chose the apple and blackberry crumble with cream but there was also a passion fruit and chocolate dome) and cheese course. This was also available with a glass of port.

For those peckish later on, passengers could order an English cream tea with a scone, lemon curd, jam and cream; a barbecued pulled pork brioche bun; warm crab cakes; or a superfood salad made from charred pineapple with quinoa, seaweed, edamame beans and yuzu dressing. (I was impressed but not surprised to see Virgin Atlantic paying attention to current food trends and redeploying in them in the air.) 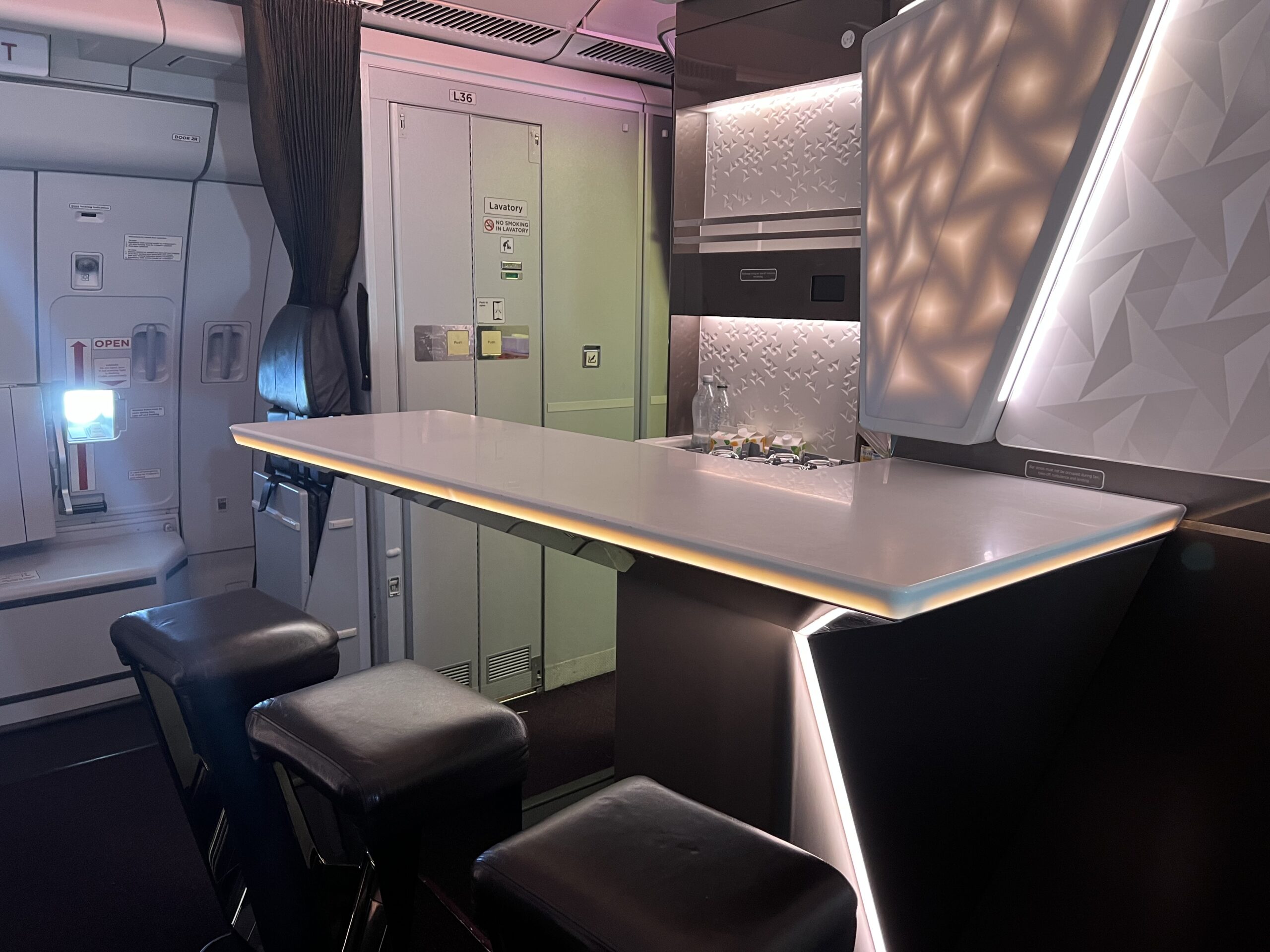 Although this was a daytime flight (estimated to be just under eight hours), seats in Upper Class all recline to fully flat beds for those who want to sleep. I spent the rest of the flight watching movies and working with my laptop on the spacious, sturdy table.

We landed on time and disembarkation was swift, via an airbridge. Passengers were asked to show proof of vaccination and a negative Covid test result at immigration but apart from that it felt very relaxed. There were no queues.

A fantastic long-haul flight – a pleasure to fly Virgin Atlantic again. I look forward to experiencing its new A350 sometime soon.

Workspace shares its vision for the future of work