How the war in Ukraine will affect European tourism

According to a new study by the Economist Intelligence Unit (EUI), sanctions on Russia, high inflation, and the loss of Russian and Ukrainian visitors have forced it to downgrade its European tourism forecasts for 2023.

The EUI says that European tourism was expected return to pre-pandemic levels in 2023, but the Russia-Ukraine conflict has compelled it to downgrade that forecast.

The war will affect Europe’s tourism industry in four ways: a loss of Russian and Ukrainian tourists; restrictions on airlines and use of airspace; higher food and fuel costs; and a big hit to traveller confidence and disposable incomes.

Turkey and Poland will suffer the biggest fall in visitors in absolute terms, but destinations such as Cyprus and Latvia were even more reliant on Russian tourists, who are traditionally high spenders.

The EUI says that the war in Ukraine, although primarily a humanitarian disaster, has set back hopes for a tourism recovery in Europe this summer. Not only will Russian tourists be unwelcome in many destinations, they will also struggle to get there, given bans on Russian airlines and restrictions on use of airspace.

Meanwhile, millions of Ukrainians are being forced abroad by the invasion, but as refugees rather than tourists. Across Europe, the war has pushed up already high commodity prices, particularly for food and energy, raising costs for debt-laden airlines, hotels and restaurants. High prices will also restrict consumers’ disposable income, making holidays less affordable even if consumer confidence returns.

The loss of Russian and Ukrainian tourists will be felt widely

Before the pandemic disrupted global tourism flows, Russia was the world’s 11th-biggest source of tourists, and Ukraine the 13th. Based on data from the World Tourism Organisation, we estimate that the two countries accounted for 75m tourist departures, or 5% of the global total, in 2019.

When it comes to tourism expenditure, Russians’ and Ukrainians’ contributions were even more important, making up a combined US$50bn (about 8% of the world total) in 2019; Russia alone was the world’s seventh-biggest spender.

Now, however, most Russian and Ukrainian tourists will disappear from Europe as war and sanctions hit travel routes and the two countries’ economies. In absolute terms, Turkey was the most popular destination for both nations in 2018, attracting 6m Russian and 1.4m Ukrainian tourists, which amounted to 16% of Turkey’s total tourist arrivals that year.

Several million Russians head to Asian countries, such as Thailand and China, and neighbouring nations like Kazakhstan, which may still be open to them. However, Poland and Italy, two other popular destinations, will now be barred to Russians.

Some smaller tourism destinations, with closer ties to Russia or Ukraine, will be hit even harder. In 2019 Russians accounted for 20%, 29% and 36% of all tourists visiting Cyprus, Montenegro and Latvia respectively. Meanwhile, the loss of tourist spending will be felt acutely in destinations that attract the

How the war in Ukraine will affect tourism

The wealthiest Russian and Ukrainian visitors, who would typically spend heavily on hotels, restaurants and luxury retail. These include cities such as Milan, London and Paris, as well as popular spa towns like Karlovy Vary in the Czech Republic or Baden Baden in Germany. 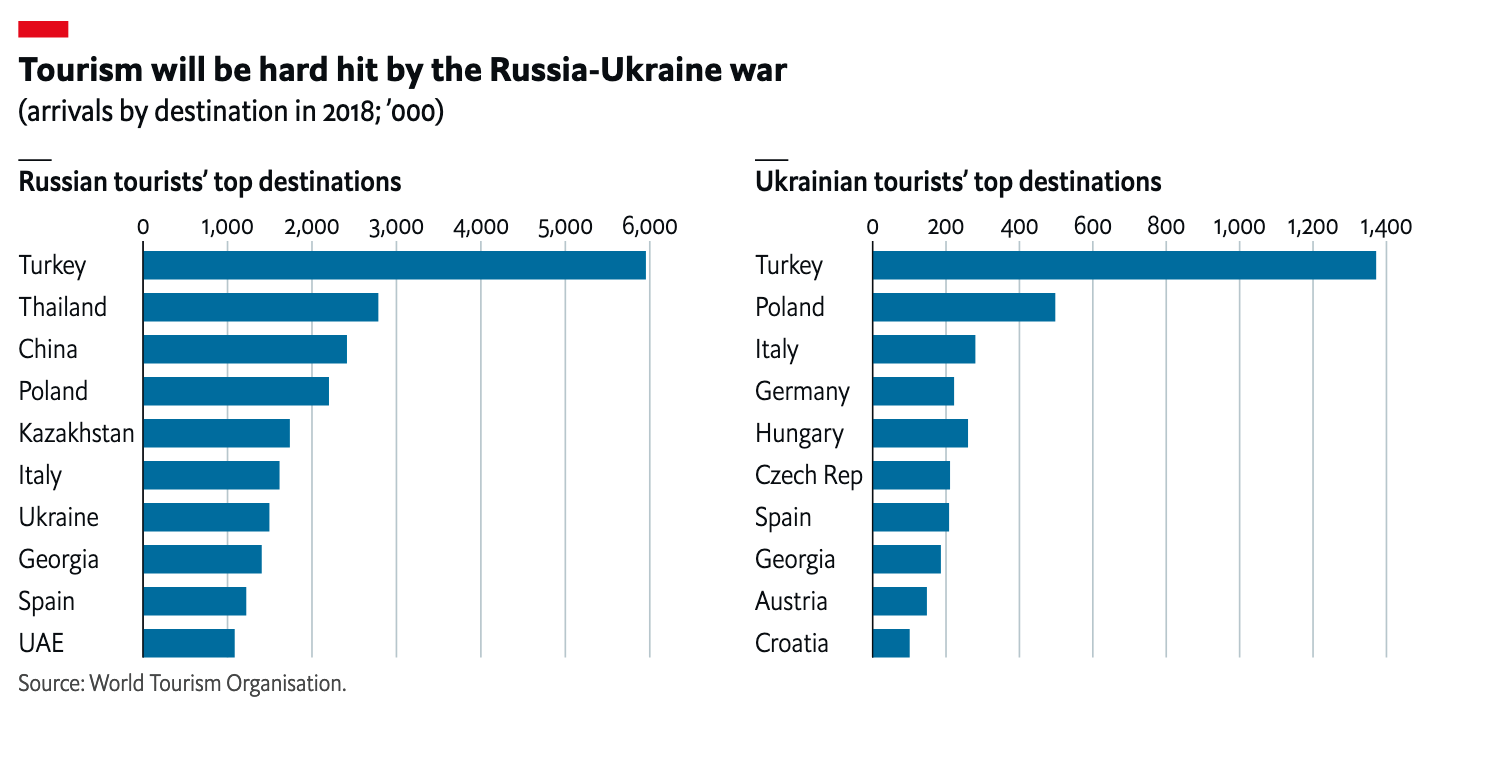 A loss of confidence since the invasion may also affect bookings by other travellers, although the full impact will not become clear until after the Easter period. Travel operators are reporting that European bookings from the US are stalling, after surging in early 2022 despite covid-related travel restrictions.

OAG, an airline data provider, reports that several scheduled flights to countries such as Finland and Sweden, as well as to much of eastern Europe, have been pulled owing to their geographical proximity to the war.

Meanwhile Russia itself will miss out on international tourist arrivals, which used to amount to 25m a year, most of which were from Ukraine. Ukraine, in turn, will lose about 14m tourists a year, many of them from Russia. Most of the well-trodden travel routes between the two countries are now blocked by tanks and missiles, and are unlikely to reopen any time soon. Most other travellers will also steer well clear.

Airlines are pulling flights from their schedules

The war and resulting sanctions will directly affect the airline industry, which had been slowly returning to normality after a disastrous pandemic. As part of the sanctions, Russian planes are now banned from EU, UK and US airspace, and planes flying over from the west are banned from Russian airspace and are avoiding Ukraine for fear of missile strikes.

Many of the most direct international routes from east to west are now impossible, forcing airlines to fly further north or south. In addition, Russia has seized foreign planes that are still on its territory, and its flag carrier, Aeroflot, has halted most of its international flights. 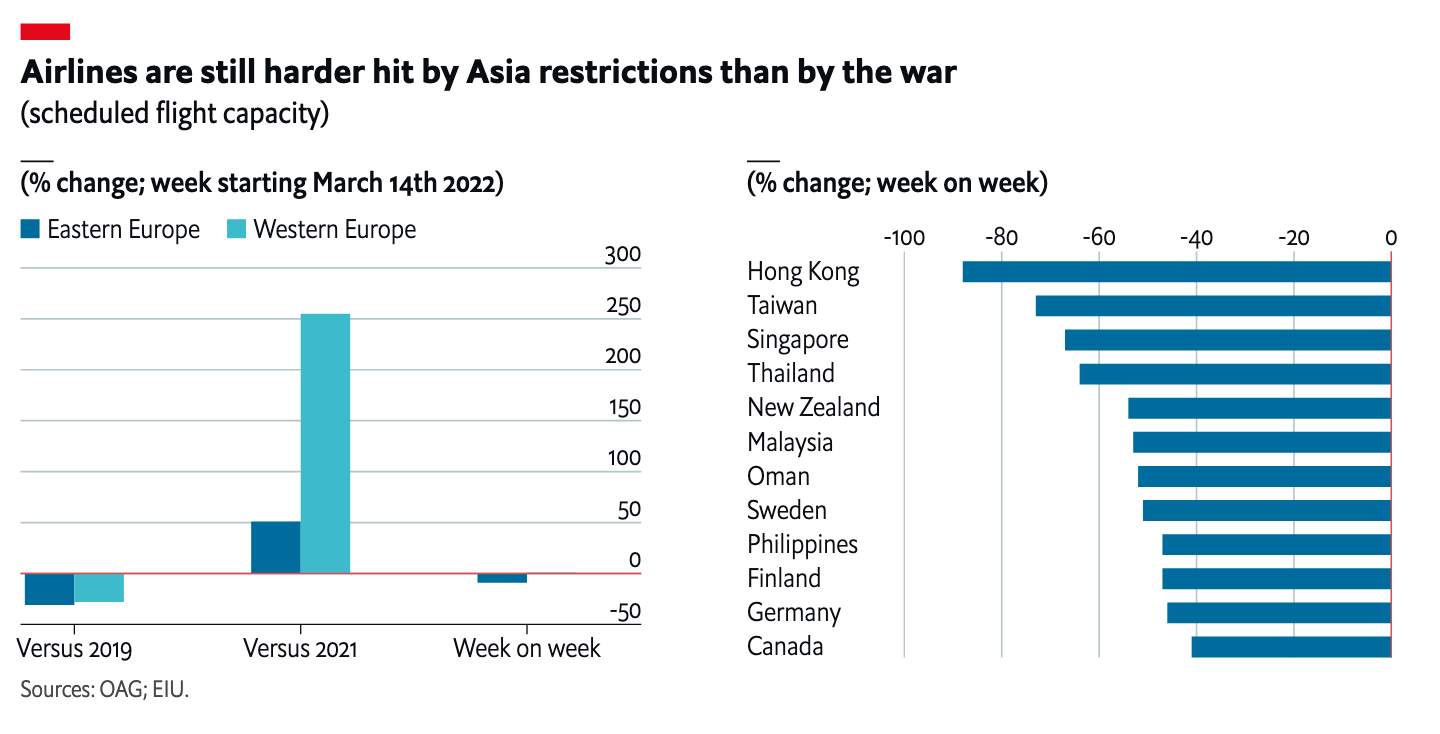 Judging by its 2021 results, Aeroflot alone will now lose an average of about 1m passengers, or US$550m in seat revenue, per month. Russia will also lose the heavy fees—some of the highest in the world– that it charged foreign airlines for their use of Russian airspace.

Other airlines will suffer too; as at April 4th OAG reckoned that about 28m seats had been removed from flight schedules for the next three months – a drop of 2% year on year. However, although some of those cuts were in response to the sanctions, the main reason was the persistent covid travel restrictions in Asia. The pandemic remains a far bigger issue for the global airline industry than the war in Ukraine.

Another issue facing airlines is the cost of fuel, which has been pushed even higher by the sanctions against Russia. Fuel accounts for 20-30% of airline costs, and jet fuel prices are now more than 80% higher than a year ago, according to the International Air Transport Association (IATA).

Insurance costs have risen sharply, too. These additional costs will be a heavy burden given airlines’ fragile finances. Even before the war, IATA expected its 290 member airlines to suffer a combined net loss of US$11.6bn in 2022, after losing about US$190bn in 2020-21.

This will have a direct impact on hotels and restaurants, which will have to pass costs on to customers. Moreover, consumers themselves are struggling with the rise in commodity prices and overall inflation, with wages failing to keep pace. People are keen to eat out and travel again, after two years of restrictions, but price rises will inevitably dent demand for outings and holidays.

Even so, with price rises buoying spending in nominal terms, we still expect Europe’s consumer spending on hotels and restaurants to rise by 8% to US$912bn, close to pre-pandemic levels. The same is not true in Russia, where Western restaurant chains such as McDonald’s (US) have ceased operations.

The EIU expects spending at hotels and restaurants to decline even in rouble terms this year, and to plummet in US dollar terms. This is just part of the heavy economic price that Russia – and, to a lesser extent, the rest of Europe – will pay as the war rages on.