Globetrender spent a night onboard Virgin Voyages’ second cruise ship Valiant Lady, which will begin sailing from her homeport in Barcelona in May 2022, and discovered a revolutionary concept that will no doubt make waves. Jenny Southan reports

Virgin Voyages is making every effort to do cruising differently. Traditionally, cruises have been something that have held more appeal to older generations but founder Richard Branson is known for disruption – and a sense of fun – and he has created a product that will undoubtedly peak the interest of Gen Zs and Millennials. Curious to see first-hand how this is manifesting in Virgin Voyages, I attended a launch party aboard the cruise line’s second ship, Valiant Lady, in March.

The vessel was moored at Tilbury port on the River Thames, just outside of London, but from May 15, 2022, Valiant Lady will be based out of Barcelona where it will embark on three Mediterranean circuits that encompass Toulon, Marina di Carrara, Ajaccio, Cagliari and Ibiza; Marseille, Cannes, Olbia and Ibiza; and Palma de Mallorca, Gibraltar, Malaga and Ibiza (all finishing back in Barcelona). Prices start from £1,007 (£2,014 per cabin).

After officially launching in October 2021 with its first ship, Scarlet Lady, Virgin Voyages is working hard to expand its fleet – and its network of destinations in Europe and the Caribbean. (In the winter Valiant Lady will relocate to the Caribbean, departing – like Scarlet Lady – from Miami.) Later this year a third ship, Resilient Lady, will set sail from Athens for seven-night cruises with stops at Mykonos and Dubrovnik, before heading to the Caribbean for winter. A fourth ship, Brilliant Lady, will set sail next year. 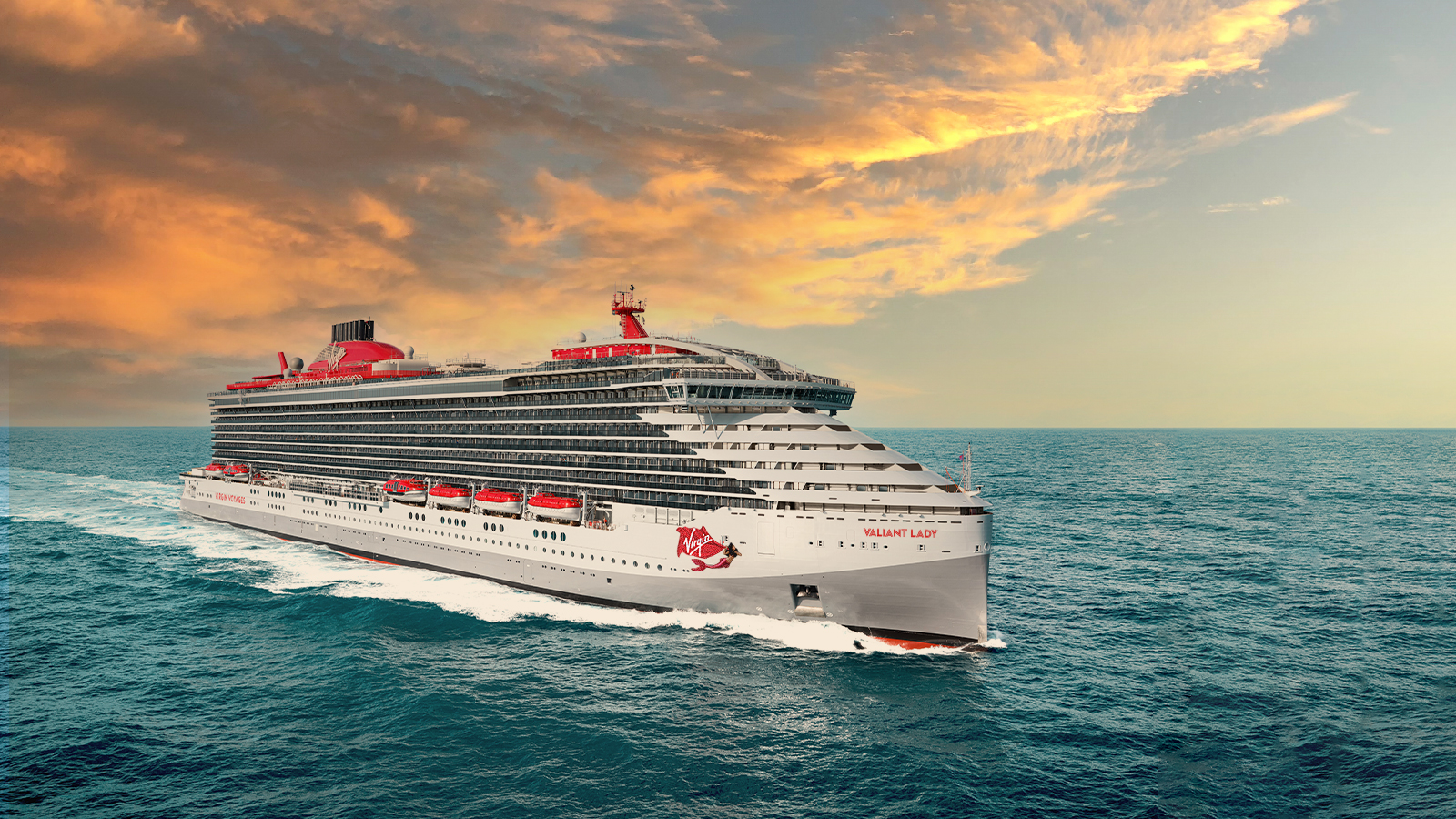 To coincide with the launch of Valiant Lady, Virgin Voyages announced a fleet-wide partnership with international film and music superstar, entrepreneur and style icon, Jennifer Lopez (the first of many indicators that this is a cruise line not aimed at the Silver Generation). The partnership means that Lopez’s line of JLo Beauty products will be stocked onboard, while she will advise the company on “Sailor experience development with an emphasis on wellbeing and fitness, to design collaborations and entertainment co-creations”.

Richard Branson, founder of the Virgin Group, said: “We knew immediately that we wanted Jennifer to be a partner and to help Virgin Voyages shape the future of travel on the high seas. She is one of the most talented and hardest working people out there. I admire her as an artist, as an entrepreneur and as a person.”

Unfortunately, J-Lo was not waiting to welcome guests to Valiant Lady herself when I arrived on the ship, but I was impressed with the line-up of artists who were booked for the night. There was a set from Grammy-award-winning Diplo, as well as a performance from singer Ella Henderson. Also in attendance were Ru Paul’s Drag Race stars Joe Black, Cherry Valentine, Sister Sister, Ella Vaday and Krystal Versace.

Before stepping aboard, guests (who must be vaccinated) are given a wristband to unlock their cabin door and advised to download a dedicated Virgin Voyages app, which allows them to do everything from ordering room service to requesting champagne simply by shaking their phone (GPS is used to locate them on the ship, wherever they are). Although it’s only a mid-size ship, it is still able to accommodate almost 3,000 passengers so it’s daunting to navigate at first, but there were plenty of staff around to guide me to the right place.

I was staying in one of the VIP Suite cabins, which are located on floors eight to 14. As soon as I opened the door, the lights went on and the curtains opened to reveal a sliding glass door leading to my own balcony, which had a hammock, table and chairs positioned just right for admiring the view. The in-room TV showed a great safety video done in the style of a music video (classic Virgin) and was able to mirror content from my own devices. A tablet computer is used to control the room settings, access services and select movies. 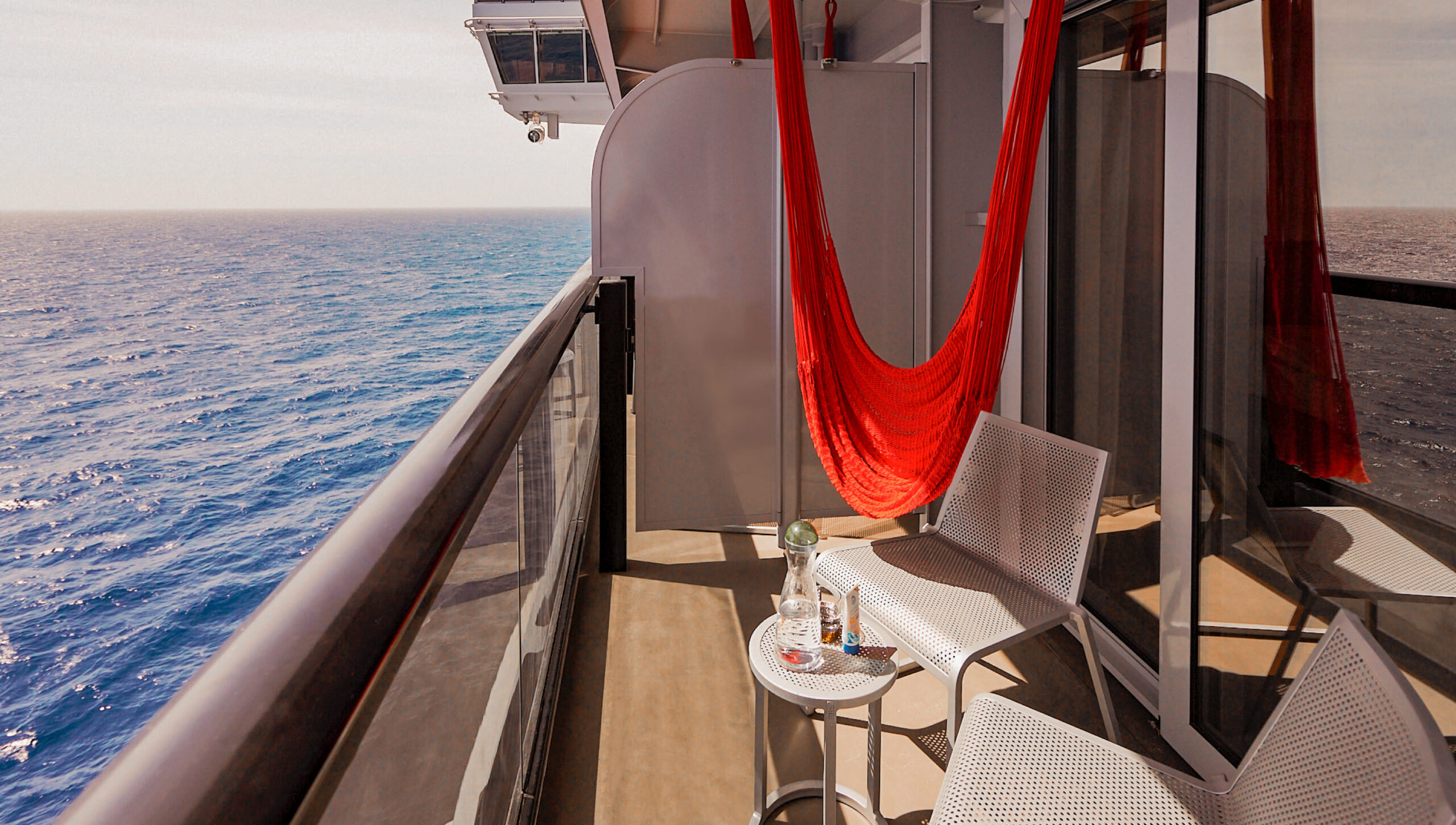 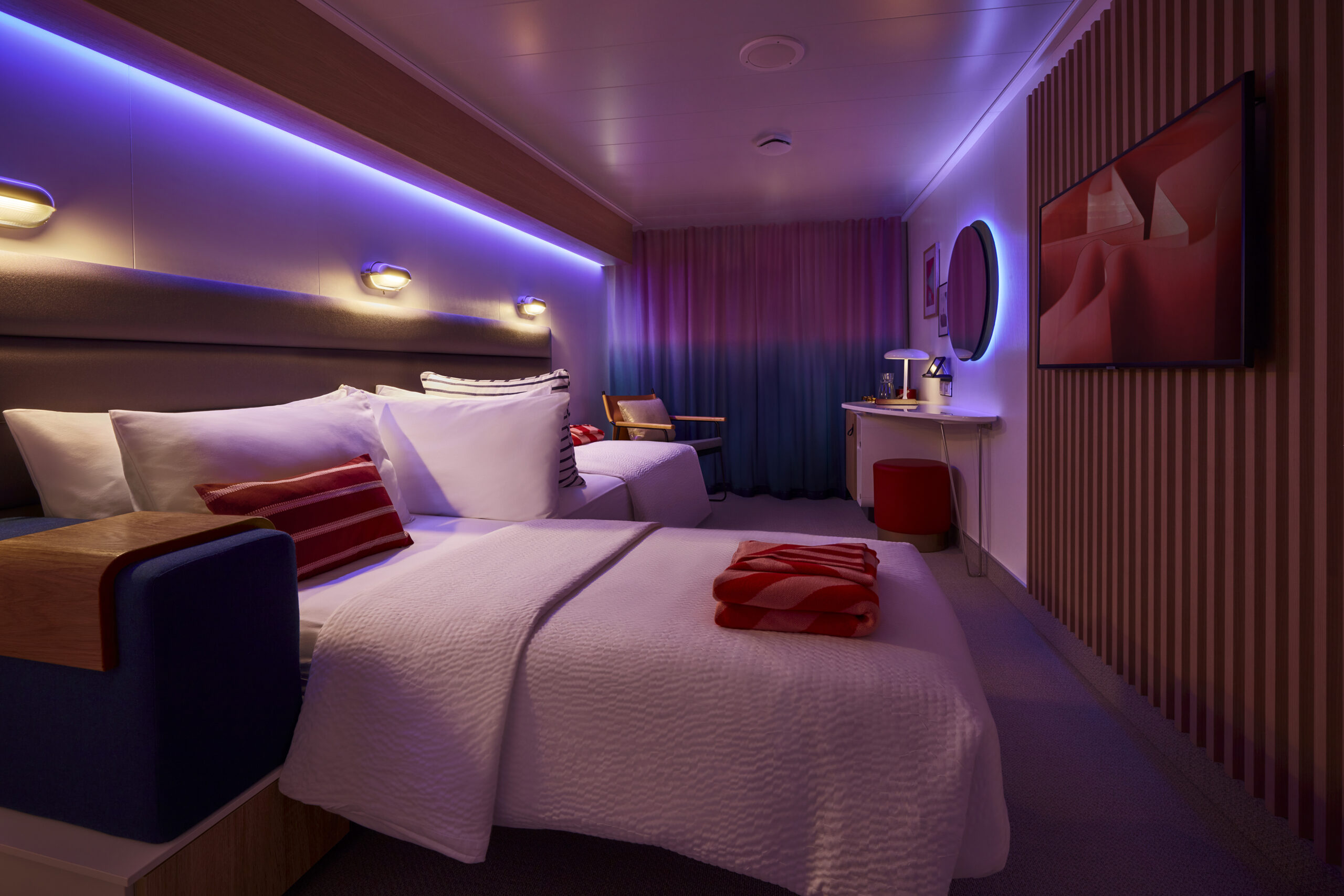 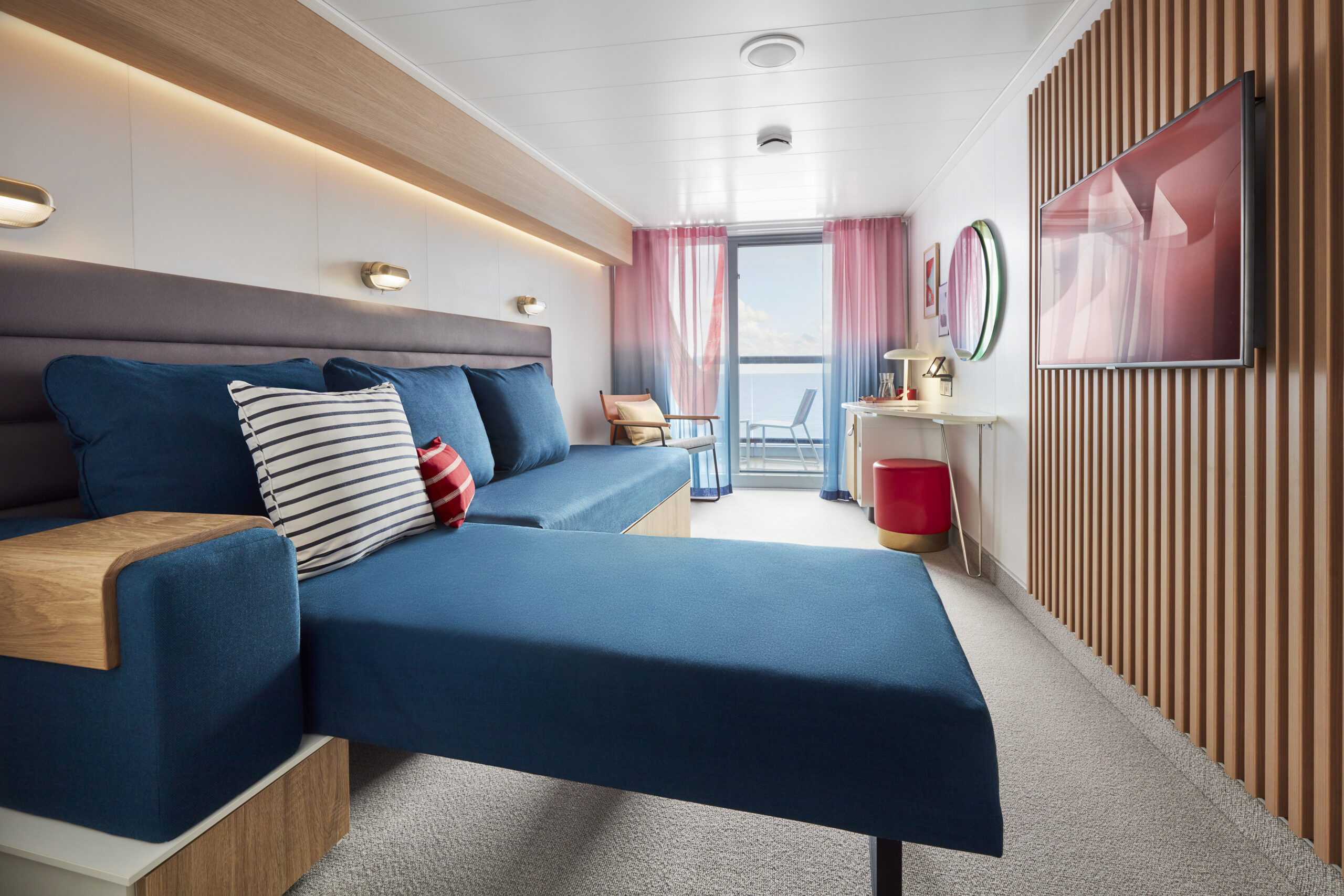 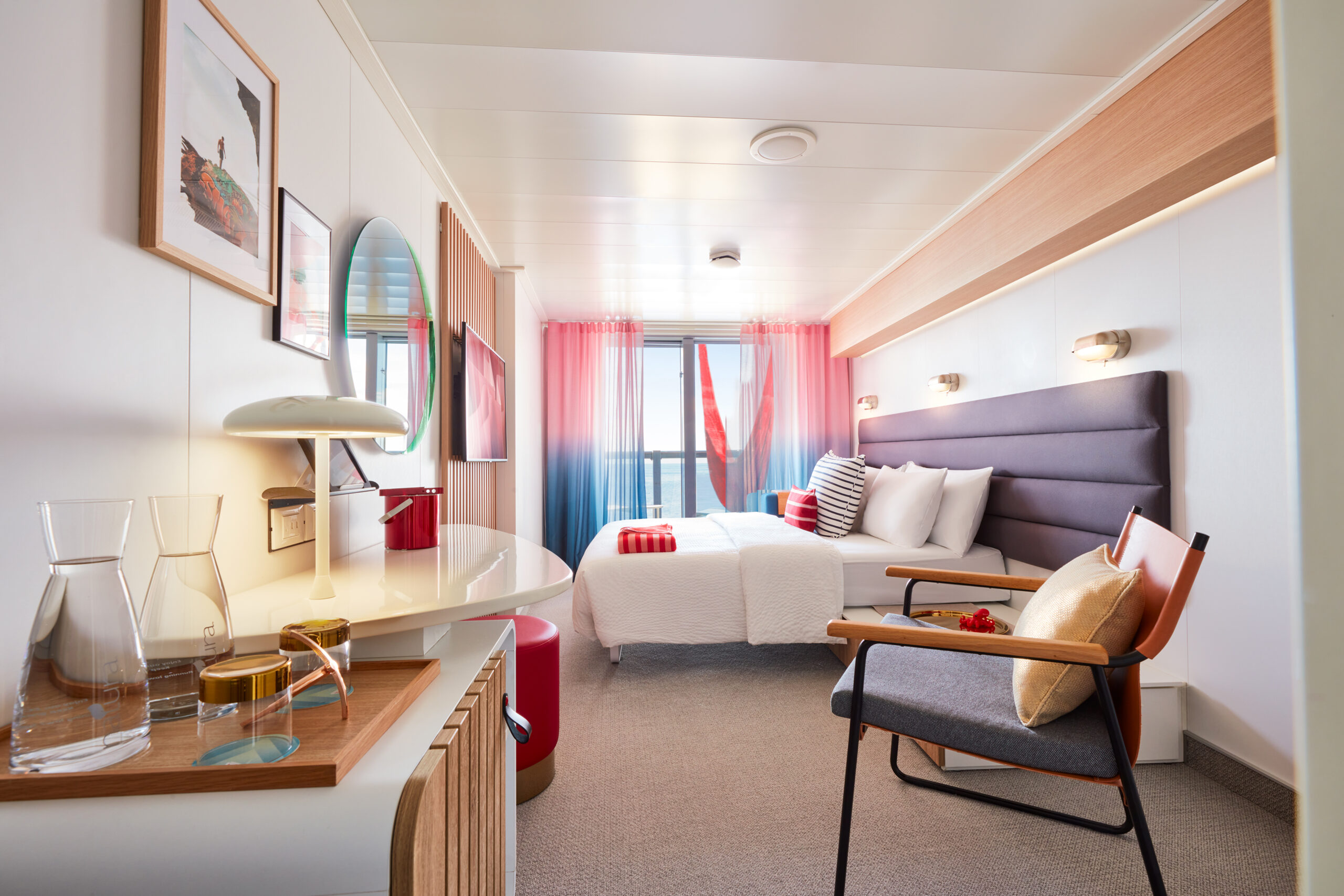 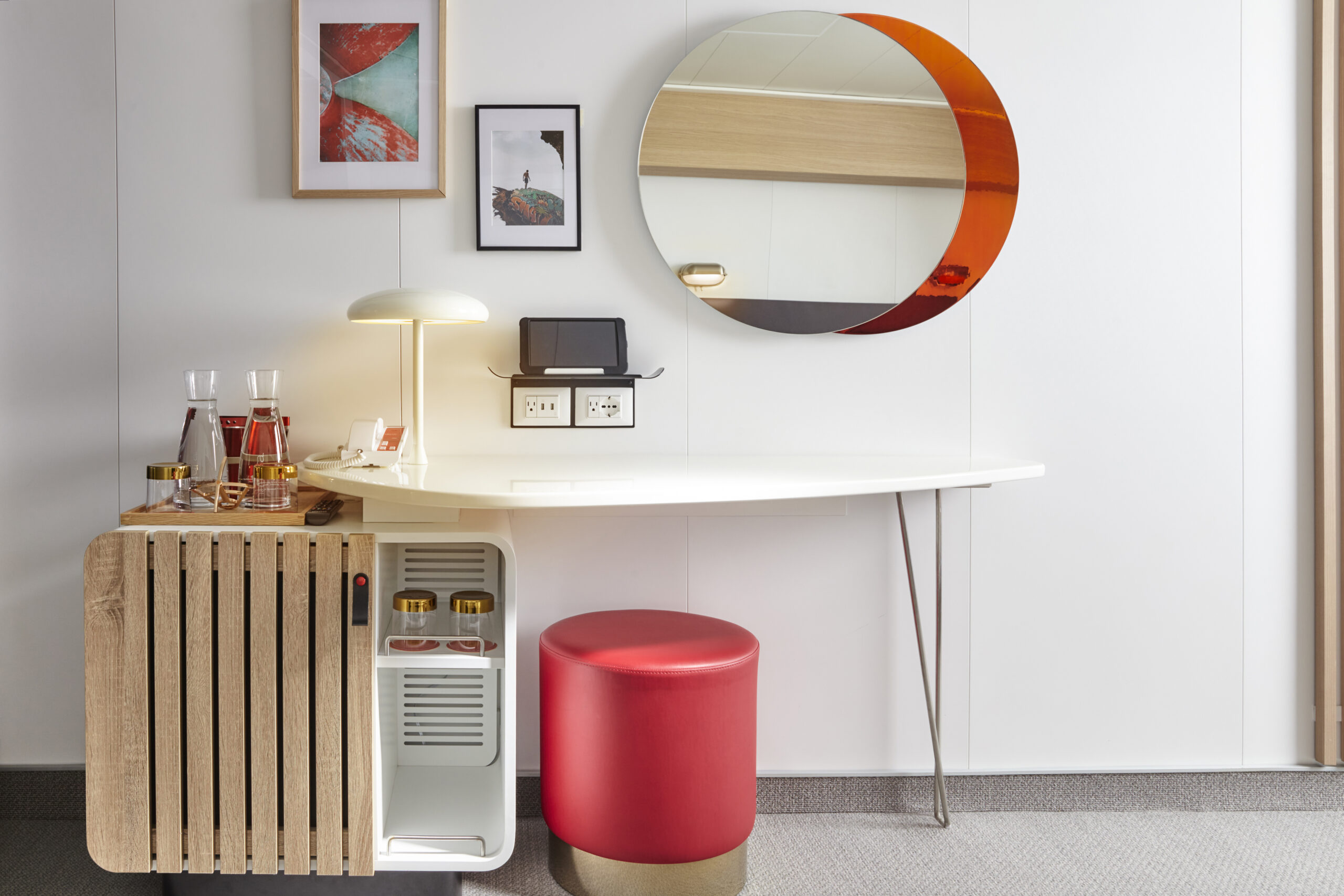 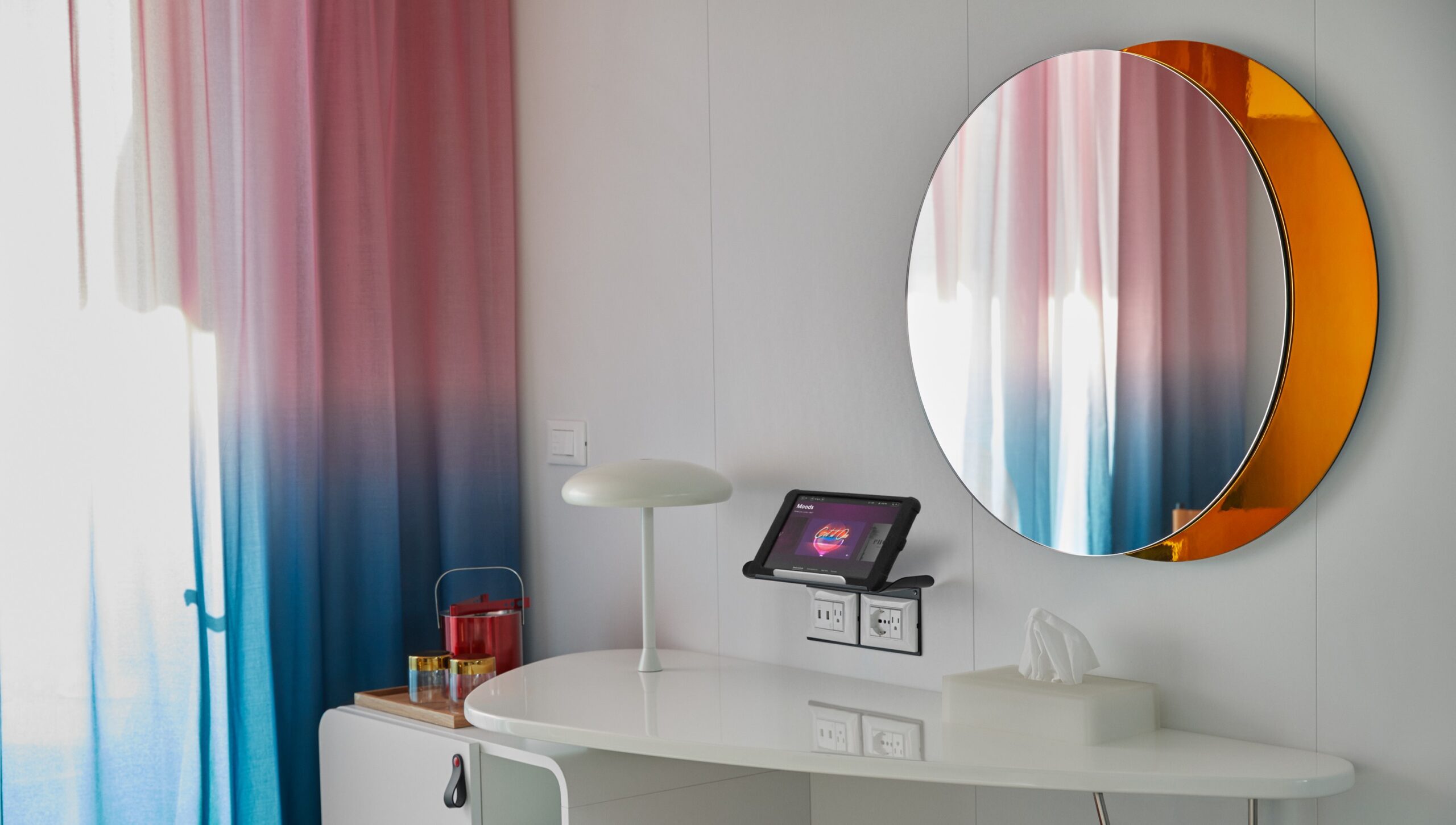 There was a small but well designed bathroom with a shower, sink and toilet, plus a wardrobe with a curtain, shelving, a safe, a double bed that converts into a sofa, a desk and a side table that can be moved to the side of the bed to allow you to work with a laptop.

It’s worth noting that there are USB charging ports but plug sockets are US and European so you need an adaptor if coming from the UK. (I didn’t have one but a member of staff delivered one to me promptly, as well as collecting some clothing to press.) There is free basic wifi and the option to upgrade to a higher bandwidth for streaming at a fee.

Although fridges aren’t stocked due to Covid regulations, a minibar list includes wine (375ml) for US$15, Moet and Chandon champagne (375ml) for US$45, Heineken lager and Red Bull for US$5, Kombucha for US$6, 200ml Crafthouse cocktails for US$13, which can all be brought to cabins on-demand.

Throughout the ship, filtered water, non-pressed juices, soda, tea and coffee are free. (Virgin Voyages has no single-use plastic onboard so guests are encouraged to fill their own bottles with water from stations in corridors – something Globetrender approves of.)

Valiant Lady features 1,330 cabins, 78 RockStar Quarters and two Massive Suites that have their own turntables and private hot tubs. Virgin Voyages says: “With 86 per cent of cabins holding a balcony and 93 per cent featuring ocean views, the cabins feature a new elevated design to bring warmer energy and a more sophisticated feel, with increased drawers and storage space – perfect for longer itineraries.” 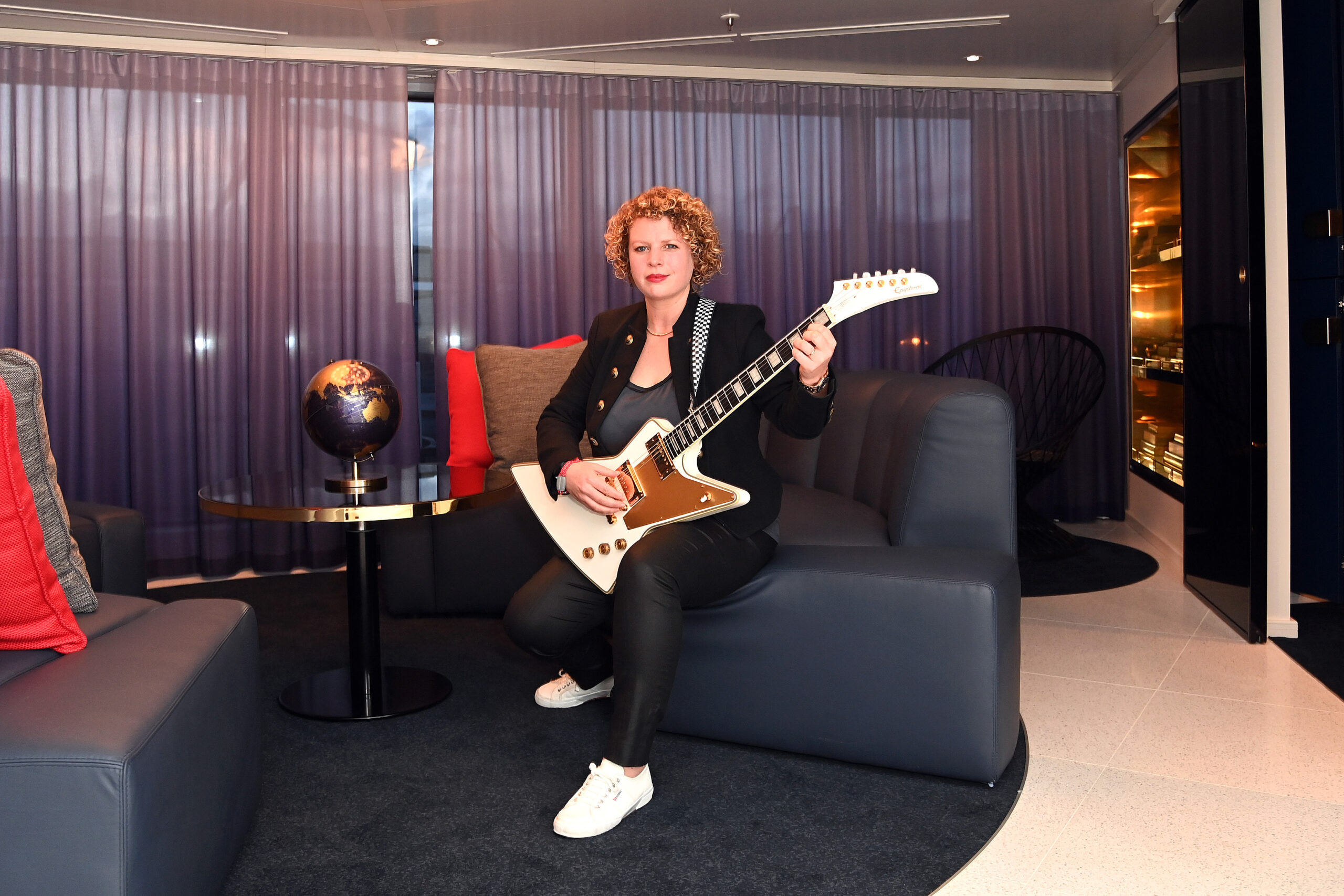 I had a behind-the-scenes tour of some of the cabins and took part in a photoshoot for The Telegraph in one of the Massive Suites, which really were awesome. Not only did they have well-stocked bars with a “first round on us” from Virgin Voyages but a very cool collection of electric guitars. I am sure you don’t get that on other cruise ships. The bathrooms also featured beautiful rainbow-coloured dichroic glass panels.

So what are some of the standout differences between a Virgin Voyages cruise and a conventional cruise? First up, there is a tattoo parlour called Squid Ink and a vinyl record store. Second, there is in-house sex therapist, Dr Alex. Third, itineraries feature longer port stays and overnighters at locations such as Palma de Mallorca and Ibiza so it’s not a case of rushing back to the ship for the evening. Passengers can also book more intimate “shore excursions” such as dining with a local chef in their home. 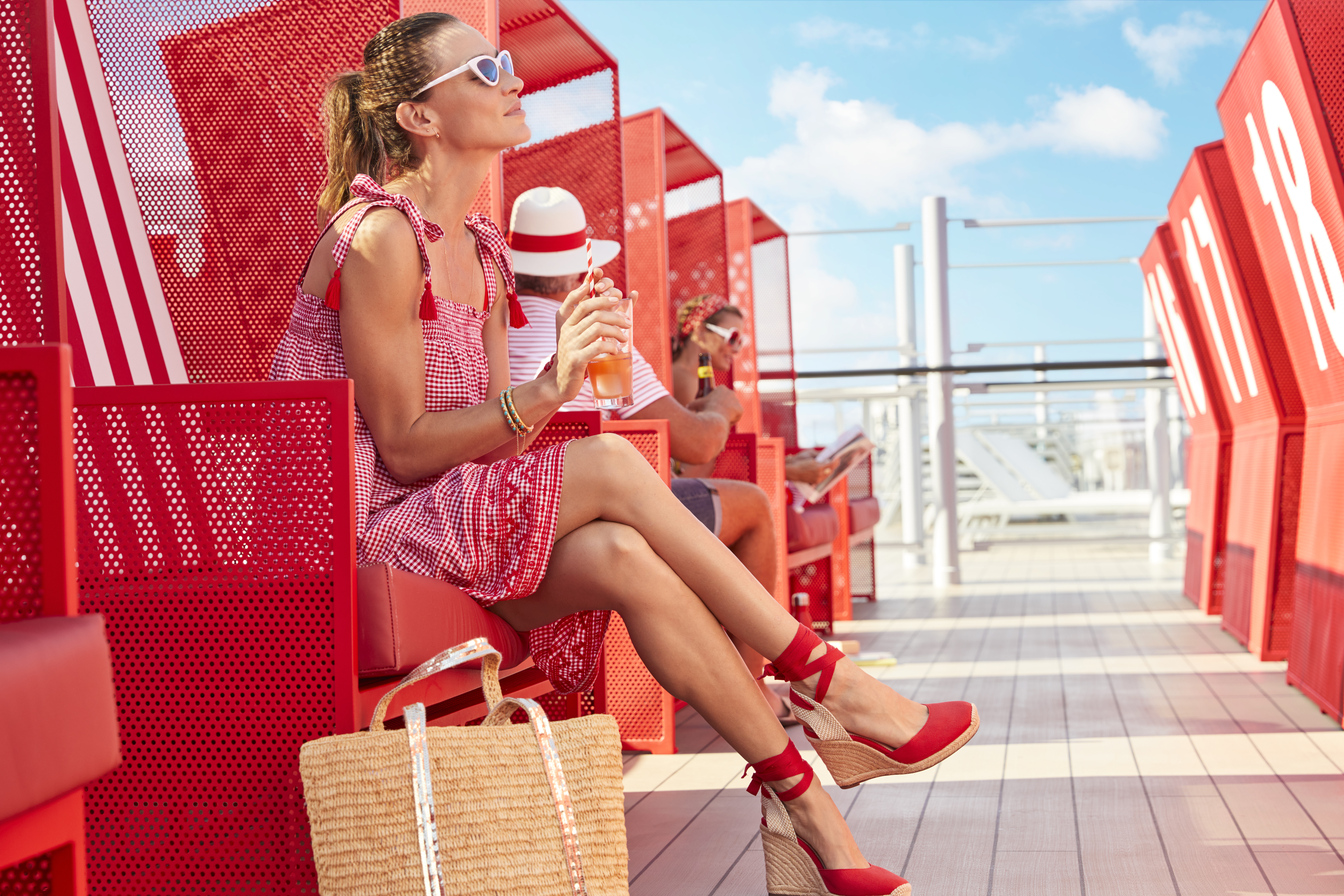 Nirmal Saverimuttu, president of Virgin Voyages said in statement: “We’ve thrown out the rule book and said goodbye to bow ties and buffets. Instead, our ships are exclusively adult, have a no-tipping policy and boast some of the best dining experiences you’ll find at sea, or on land for that matter – including the world’s first Korean BBQ and the biggest collection of mezcal and tequila at sea.”

One of the best things are the fact that dining is all-inclusive and there are more than 20 eateries, from the Test Kitchen, which serves “experiemental cuisine”, to a 24-hour American diner. (There is no dress code anywhere on the ship so the feeling is relaxed at all times.) I had breakfast at “veggie-forward” Razzle Dazzle, which does an excellent avocado on toast.

Other Instagram-friendly dishes on the menu such as watermelon with tofu cream and frozen berries; coconut milk fairy toast; and Impossible meat-meat-free burgers. For elder Millennials there is a “Berryatric” smoothie made with cashew milk, pomegranate and acai powder. 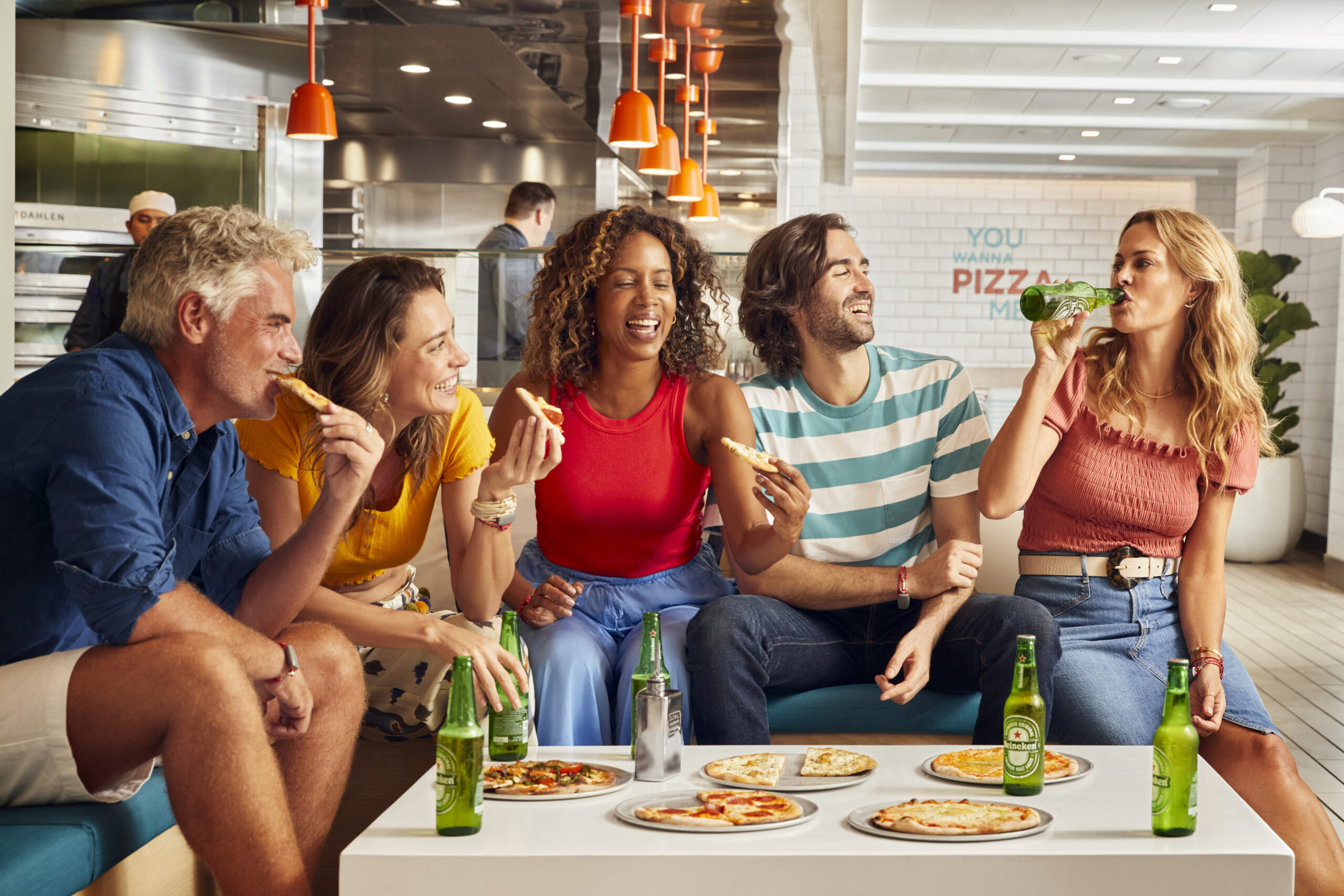 During my stay, I had a late-night sitting at Pink Agave, which is a hyper trendy Mexican restaurant with interiors by Tom Dixon. It felt more like being in central London – not on a ship floating on water. I was interested to learn that every one of Valiant Lady’s restaurants has its own kitchen – and cuisine – instead of all the food onboard being mass-cooked by one vast catering team that might need to serve 1,000 steaks in one evening. It also means there is less food waste.

Other Millennial-friendly options include Hawaiian poke bowls at the Sun Club Cafe, ramen at Noodle Around, Japanese bento boxes from Bento Baby, popsicles from Pop Star, ice cream from Lick Me Till Ice Cream, and pizza from the Pizza Place. In terms of entertainment, there are “Diva brunches”, nightclubs, a casino, an interactive late-night cabaret with Dr Alex and circus performances.

Another great thing about Virgin Voyages is its health and wellness offering. Not only is there an amazing outdoor elevated running track that loops all around the funnel, but a sizeable swimming pool, al fresco boxing ring and basketball court. There is also a stunning spa with saunas, steam rooms and whirpool baths with sea views, plus a menu of treatments including massages using Himalayan salt stones, dermal face fillers, acupuncture and hydration therapy via intravenous drip.

To top it all off, all fitness classes are free to attend so unless you are too hungover, you can sign up for HIIT training, yoga or even a nostalgic 80s-inspired workout where you are given sweatbands and leg warmers to wear. 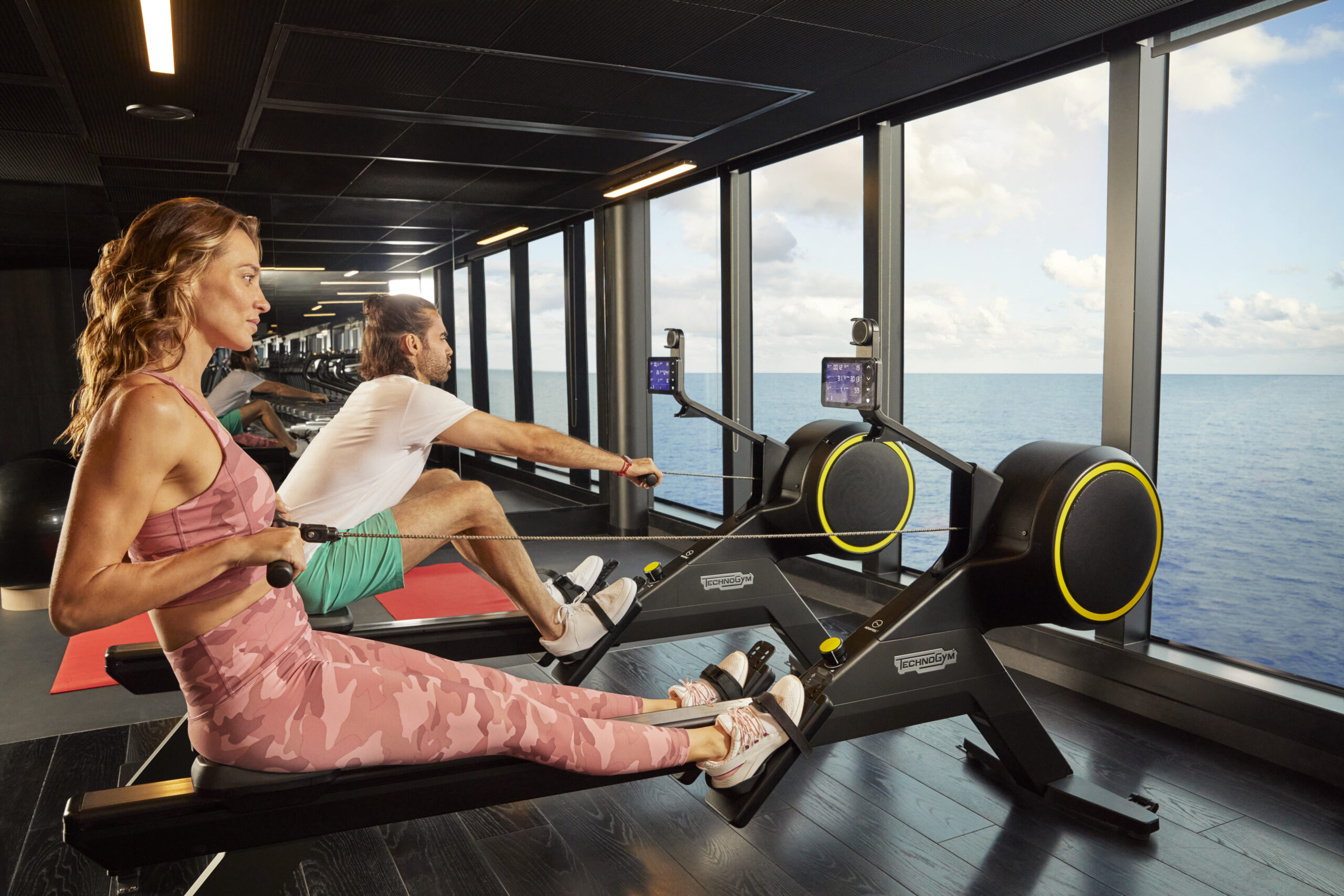 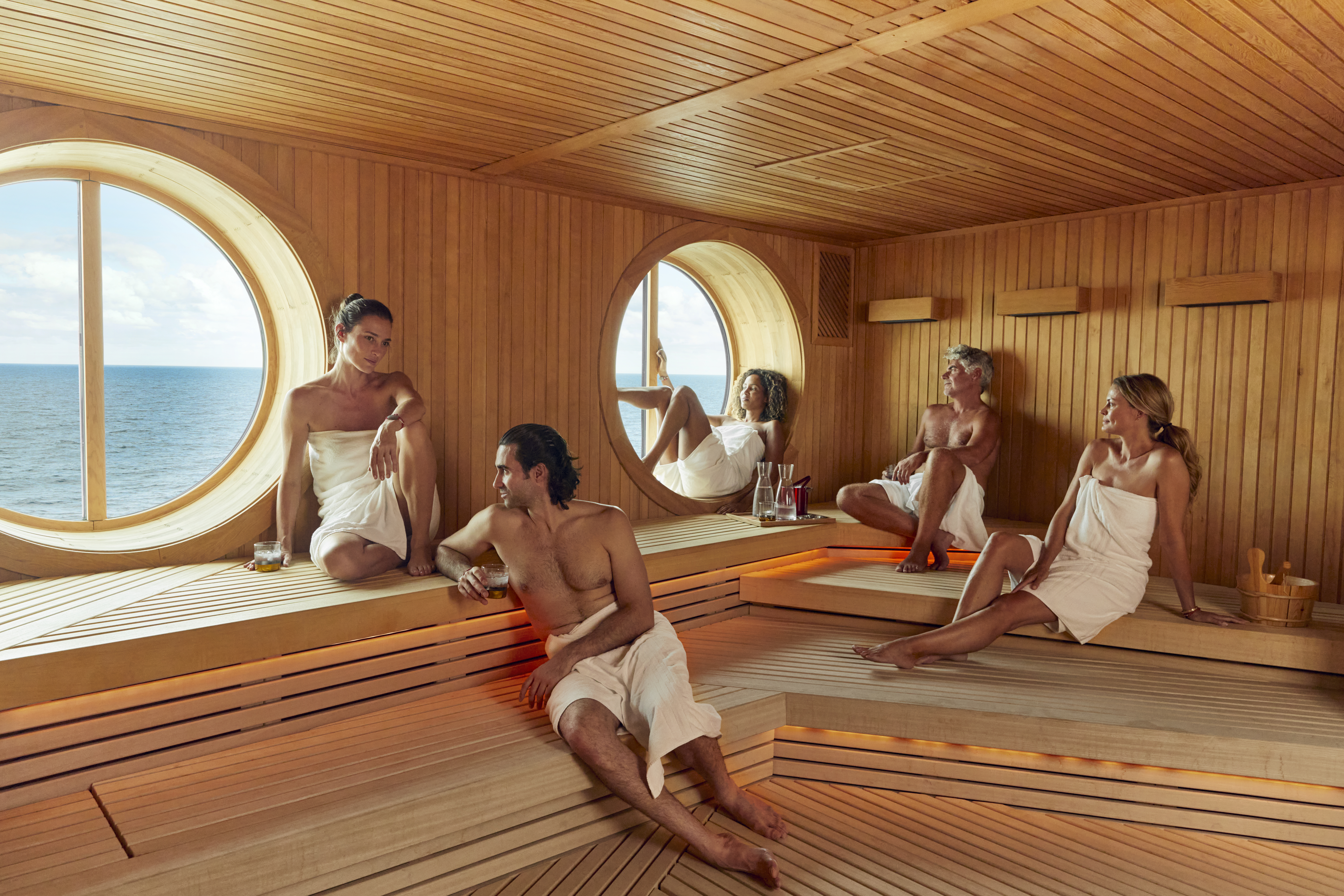 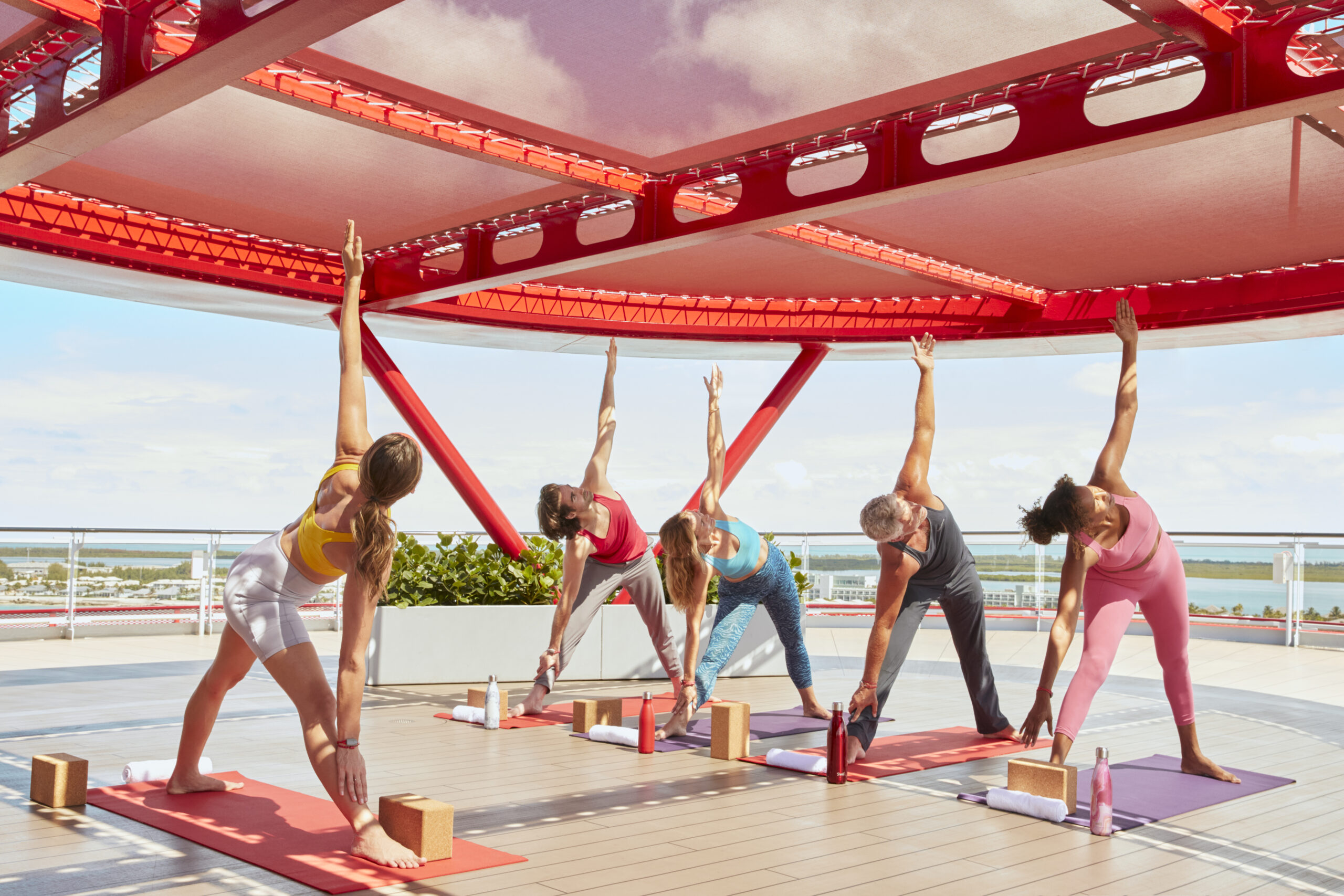 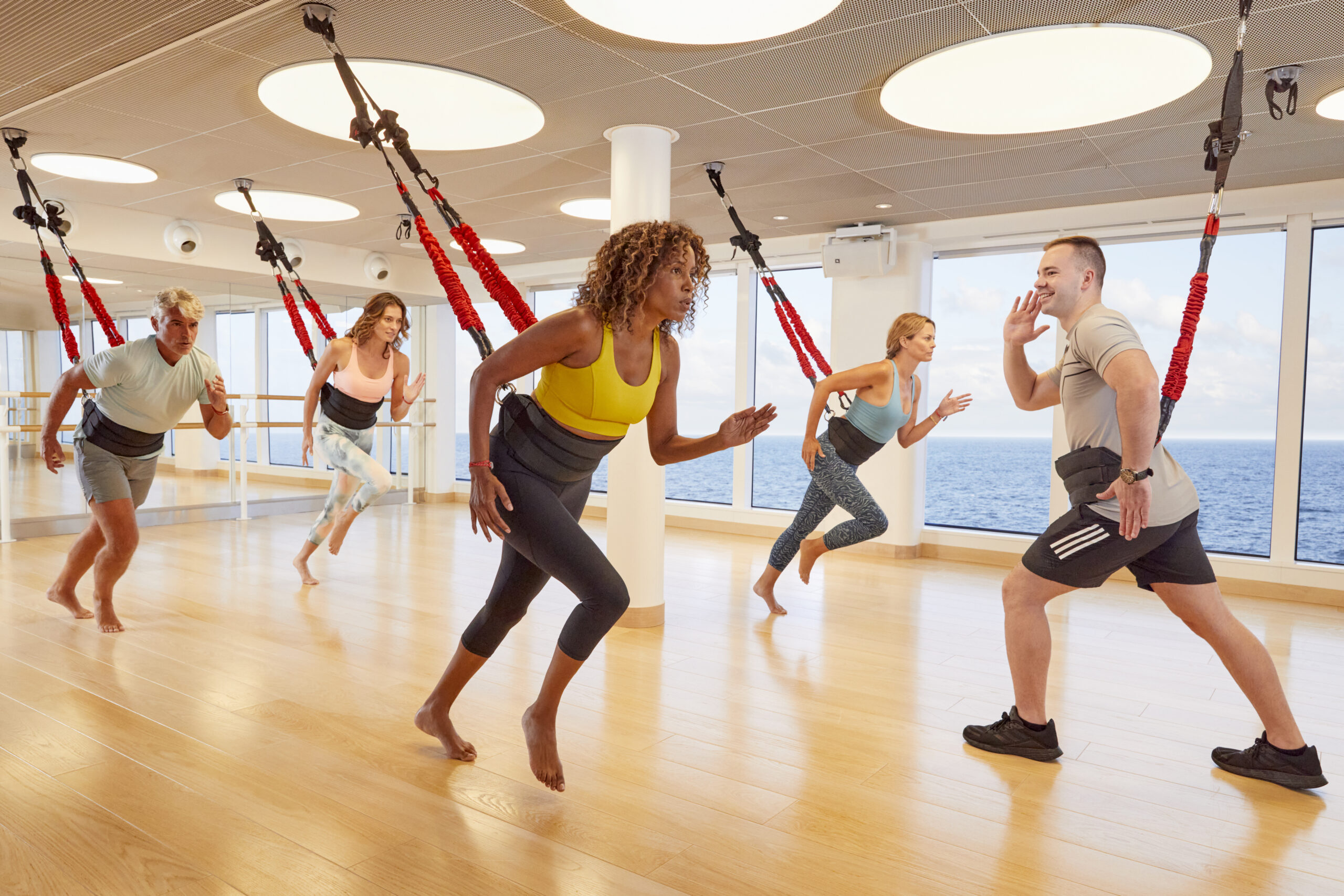 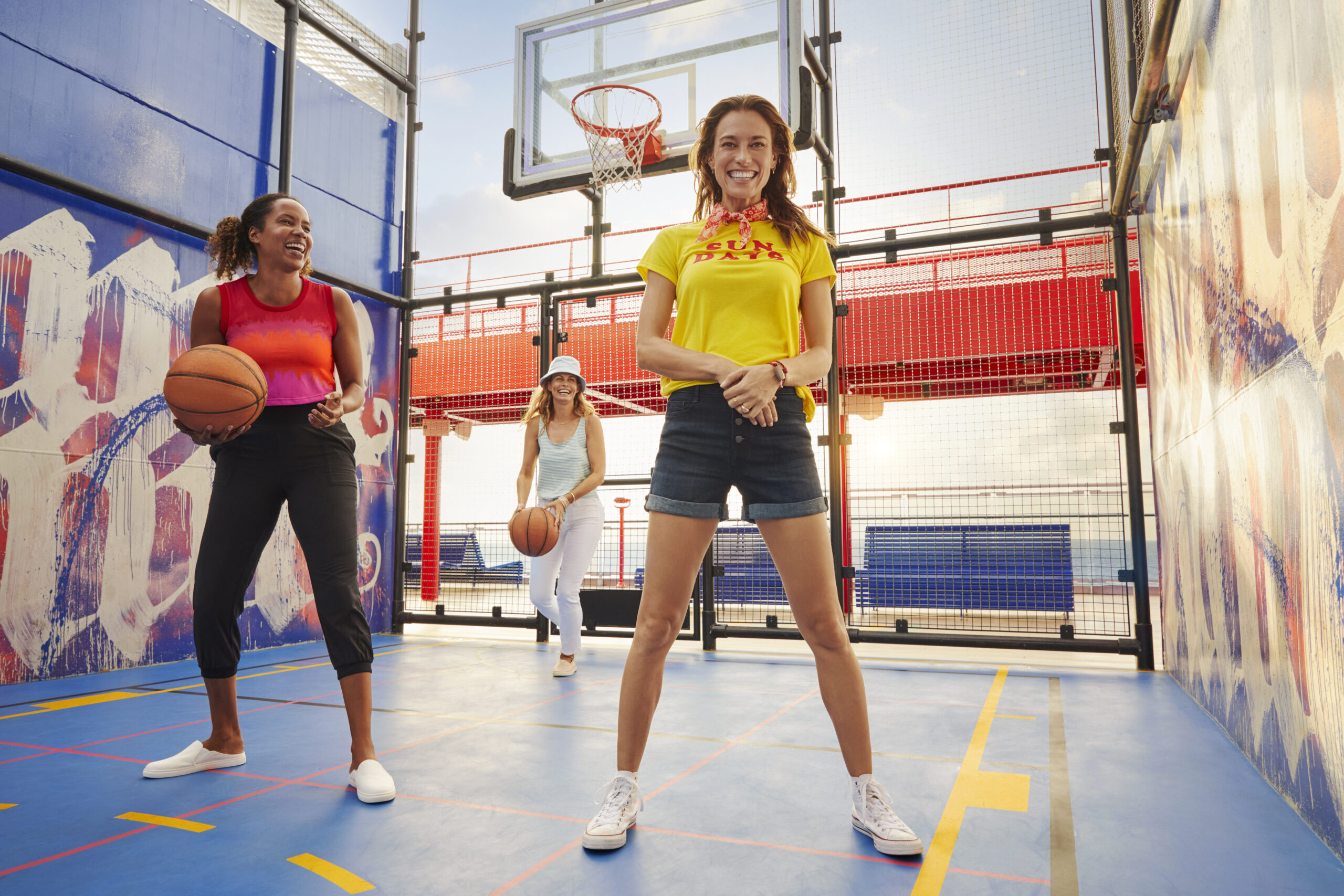 Despite ticking dozens of Millennial trend boxes, according to Saverimuttu, Virgin Voyages isn’t specifically targeting young people. He tells Globetrender that 68 per cent of customers are so far actually over 40. However, 31 per cent of Virgin Voyages passengers are under 40 and 20% of bookings are coming from first-time cruisers, which is not insignificant.

Other data from the company reveals that the majority of cruisers (80 per cent) are seeking and booking “exclusively adult” propositions, and more than half (53 per cent) of guests have children and are booking with the intention of spending time away them.

From 2023, Resilient Lady will be setting sail from her new home port of Melbourne. Apparently, Virgin Voyages reports that the cruise industry in Australia is “booming” with one in every 17 Australians taking a cruise.

Resilient Lady will sail through New Zealand and Australia from December 11, 2023, to March 27, 2024. New Zealand itineraries feature port stops in cities such as Auckland, Dunedin and Christchurch, with destinations across Australia including Hobart and Burnie and Sydney.