Curious to learn more about VistaJet’s new Private Dining experiences, Globetrender travelled to Farnborough airport outside of London to have dinner on a state-of-the-art Global 7500, which was parked on the tarmac. (We didn’t fly as it would have caused unnecessary pollution.) 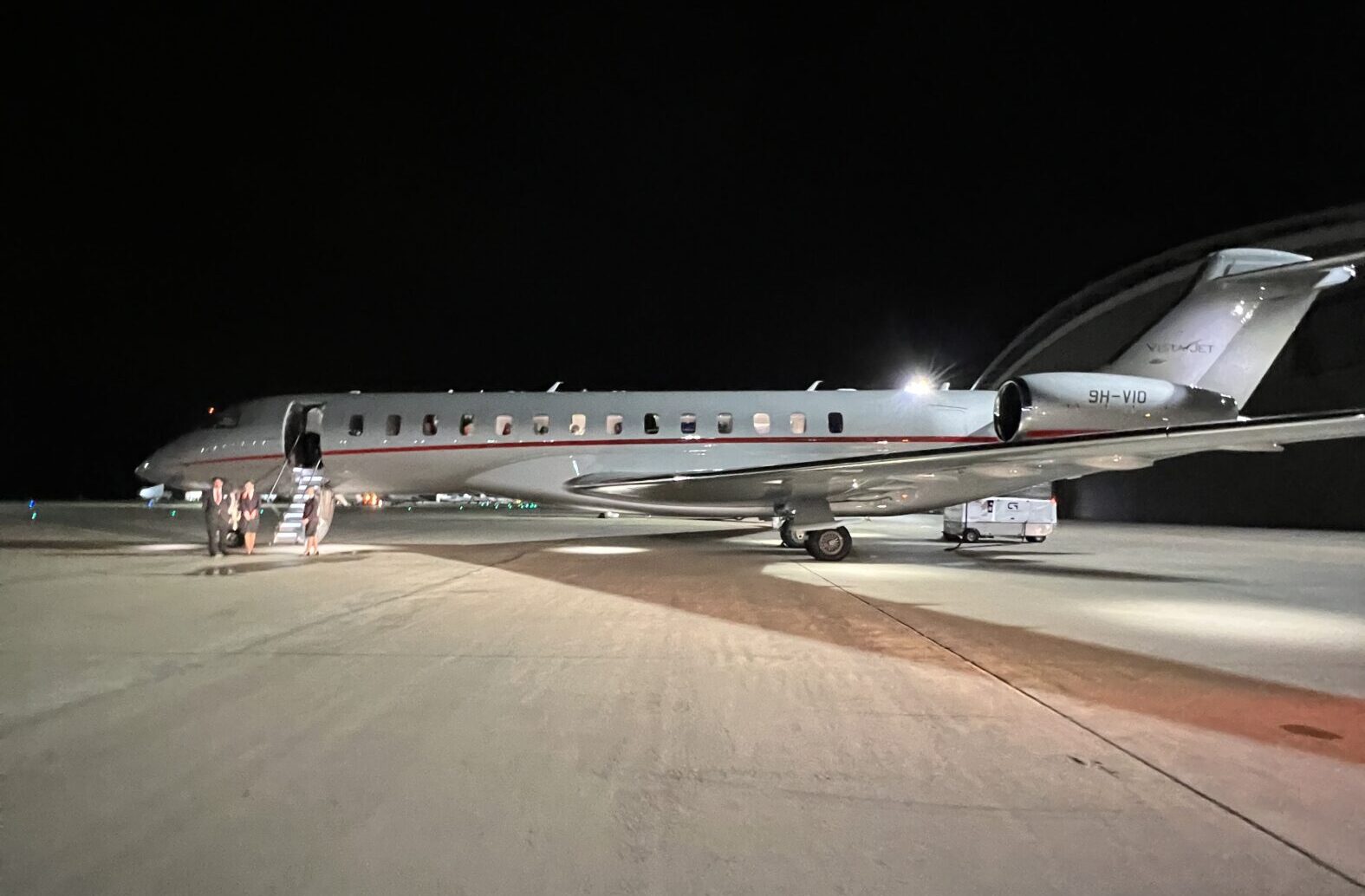 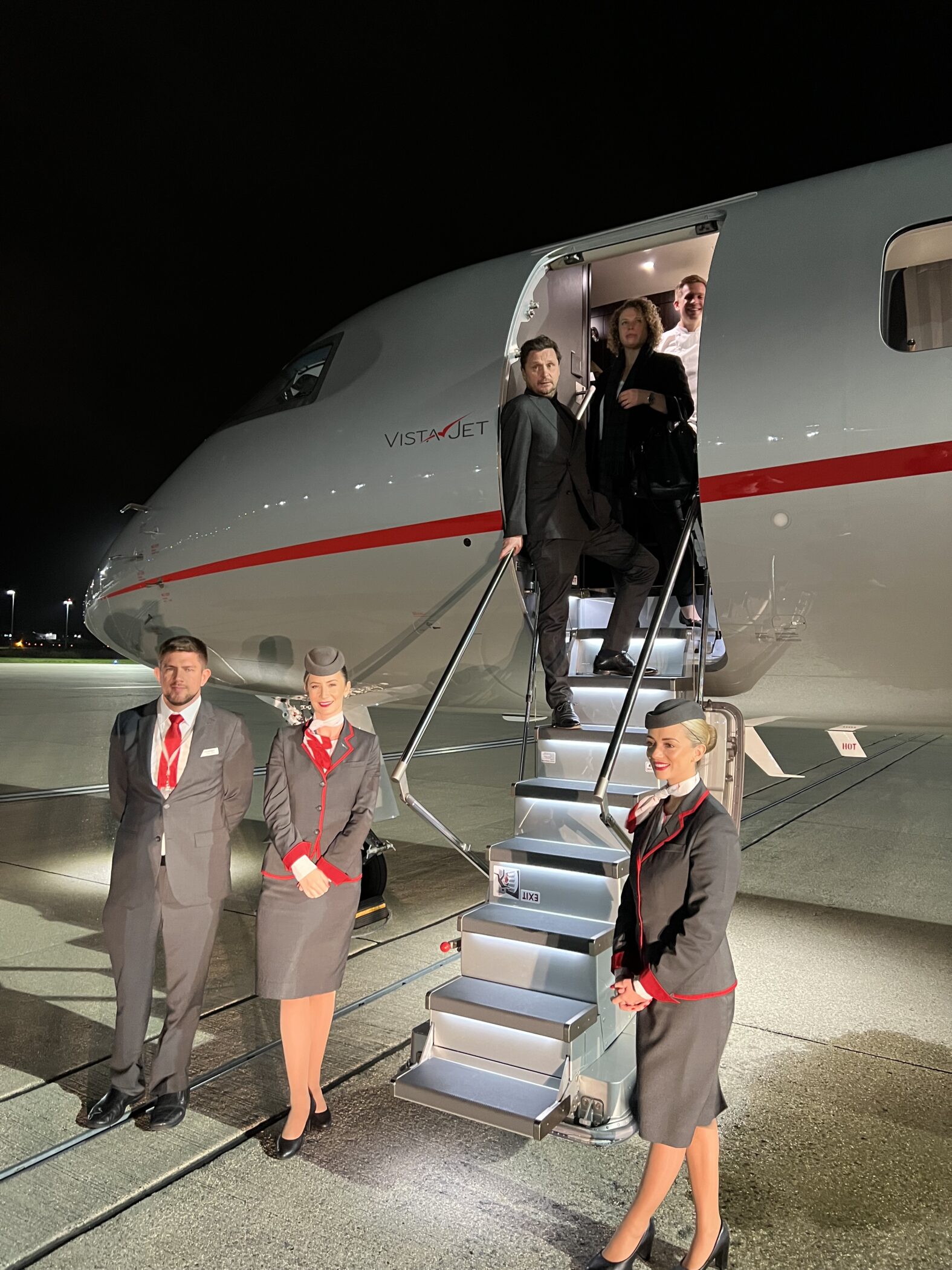 Capable of flying at 45,000 feet – higher than Mount Everest – the Global 7500 aircraft offers the chance to dine at the world’s “highest restaurant”.

On this occasion, we were being cooked for by Michelin-star chef Alex Dilling, who heads up the Alex Dilling modern French gastronomic restaurant at Hotel Café Royal in London. 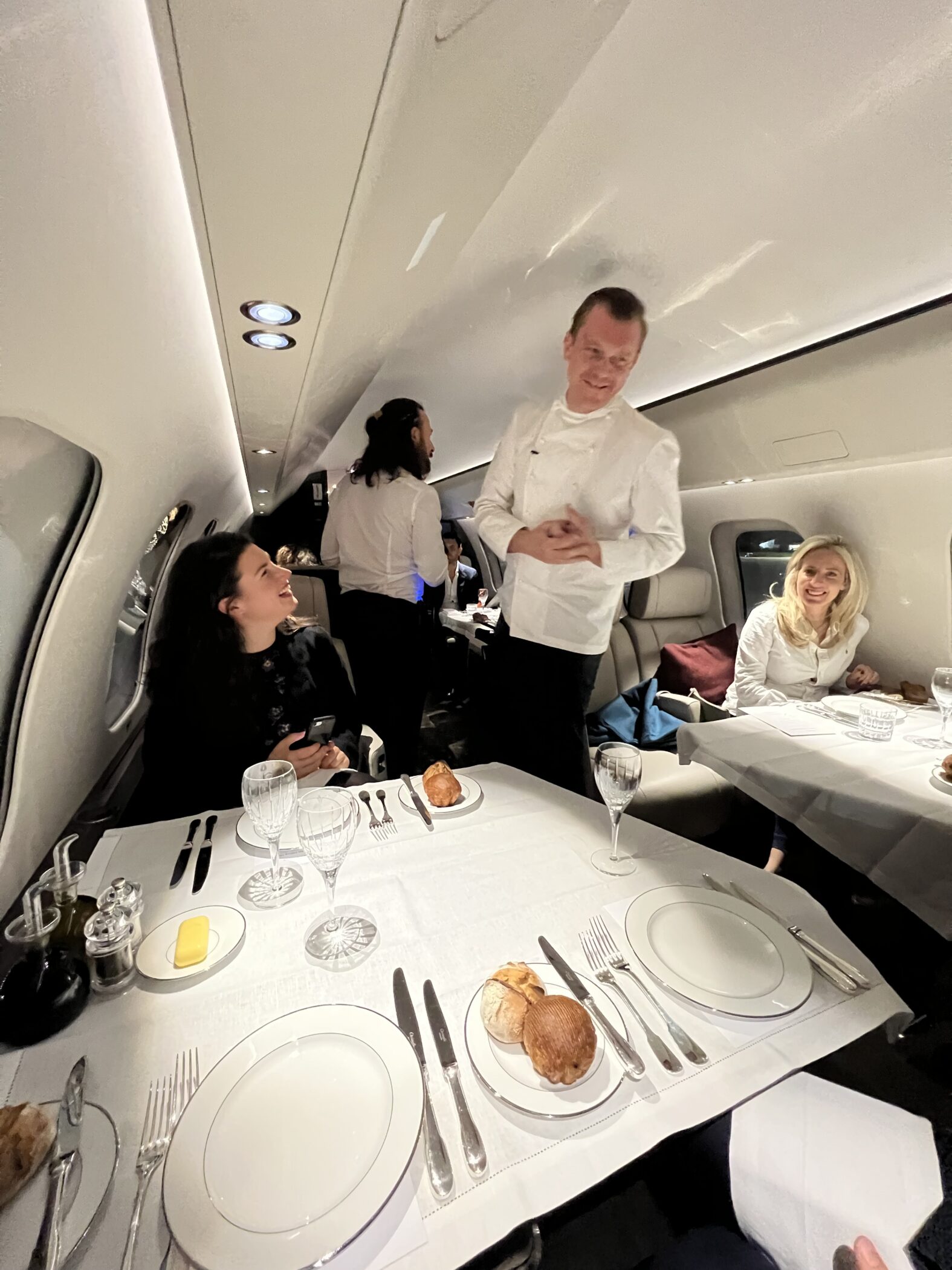 With a network of more than 7,000 suppliers around the world, VistaJet says it is the “first and only global business aviation company, allowing passengers to embark on a curated voyage through the finest delicacies in the world – on board and at destination”.

Diego Sabino, vice-president of private dining at VistaJet, is a chef himself but also manages a team of 29 people who are dedicated to managing the in-flight catering experience. He says: “We have been on a journey to transform the private dining experience in the air – to make it something to savour.

“Simple things, big flavours and the best ingredients prepared and cooked to perfection will always travel well. We have explored the art and science of dining, so our members can cherish time together on board, with the right taste, whatever the occasion.” 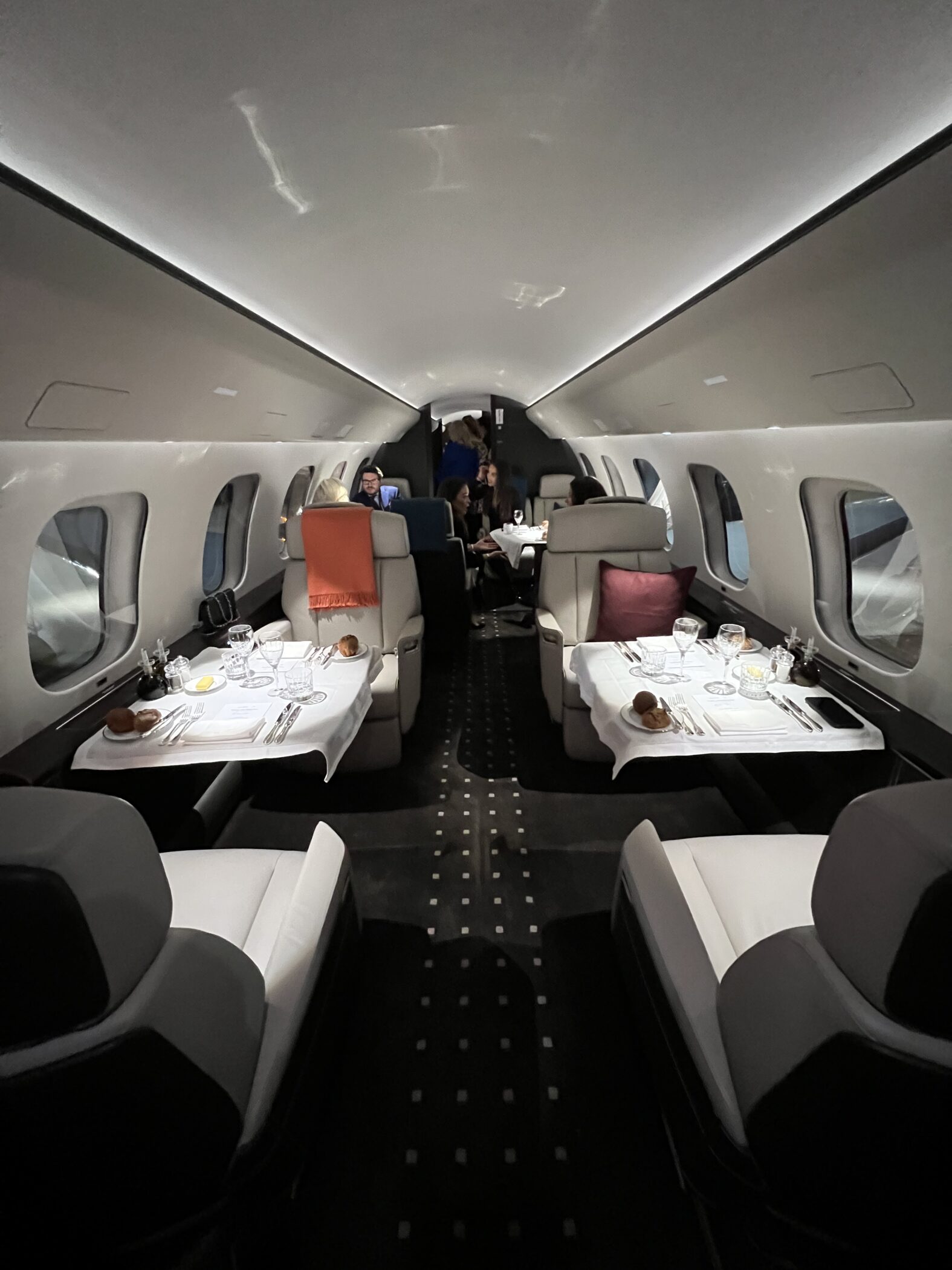 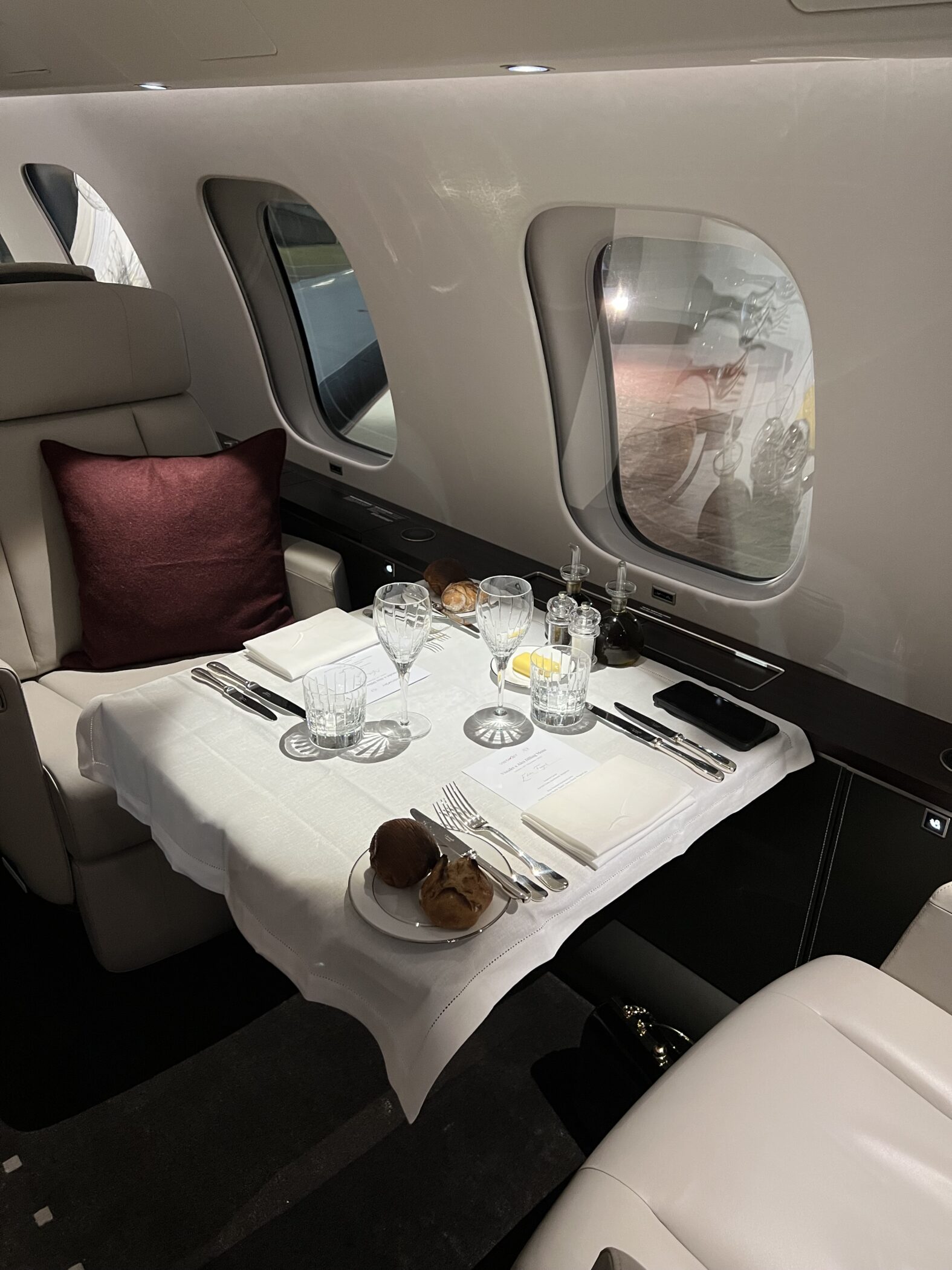 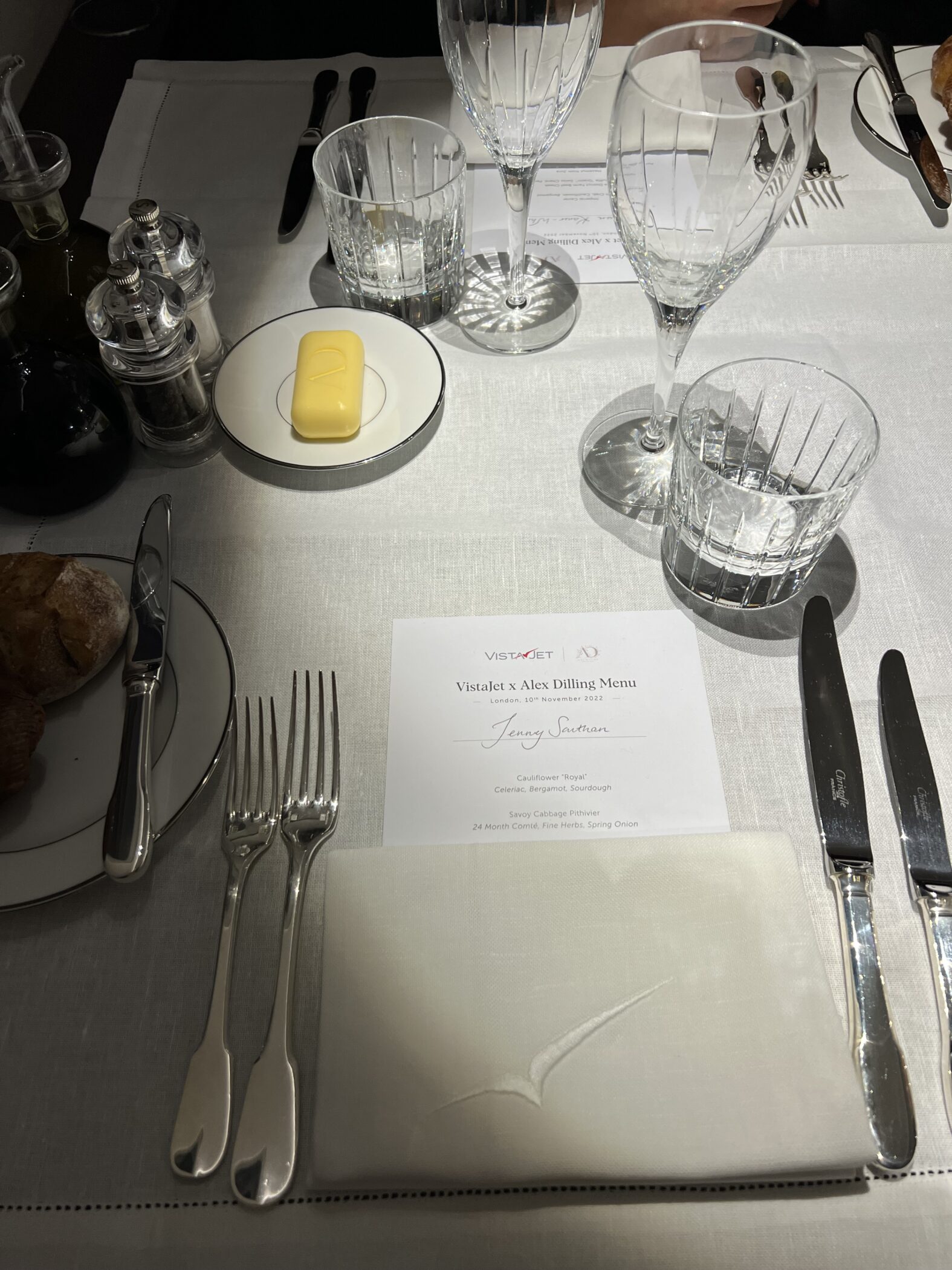 Just like in the best restaurants on the ground, VistaJet is focused on seasonality, health and wellbeing, continually evolving its menus for people wherever they are flying from. Once the ingredients have been sourced, every dish is prepared on demand, in-flight, in the onboard galley.

Tapping into the trend for Hyper Personalisation (a term coined by Globetrender), VistaJet asks every passenger what food they would like to eat before they fly and designs a bespoke menu for them.

This is all managed via a dedicated app. Food must be ordered at least 24 hours in advance but VistaJet suggests 48 hours to ensure they can source everything. What’s more, almost no demand is too outlandish. 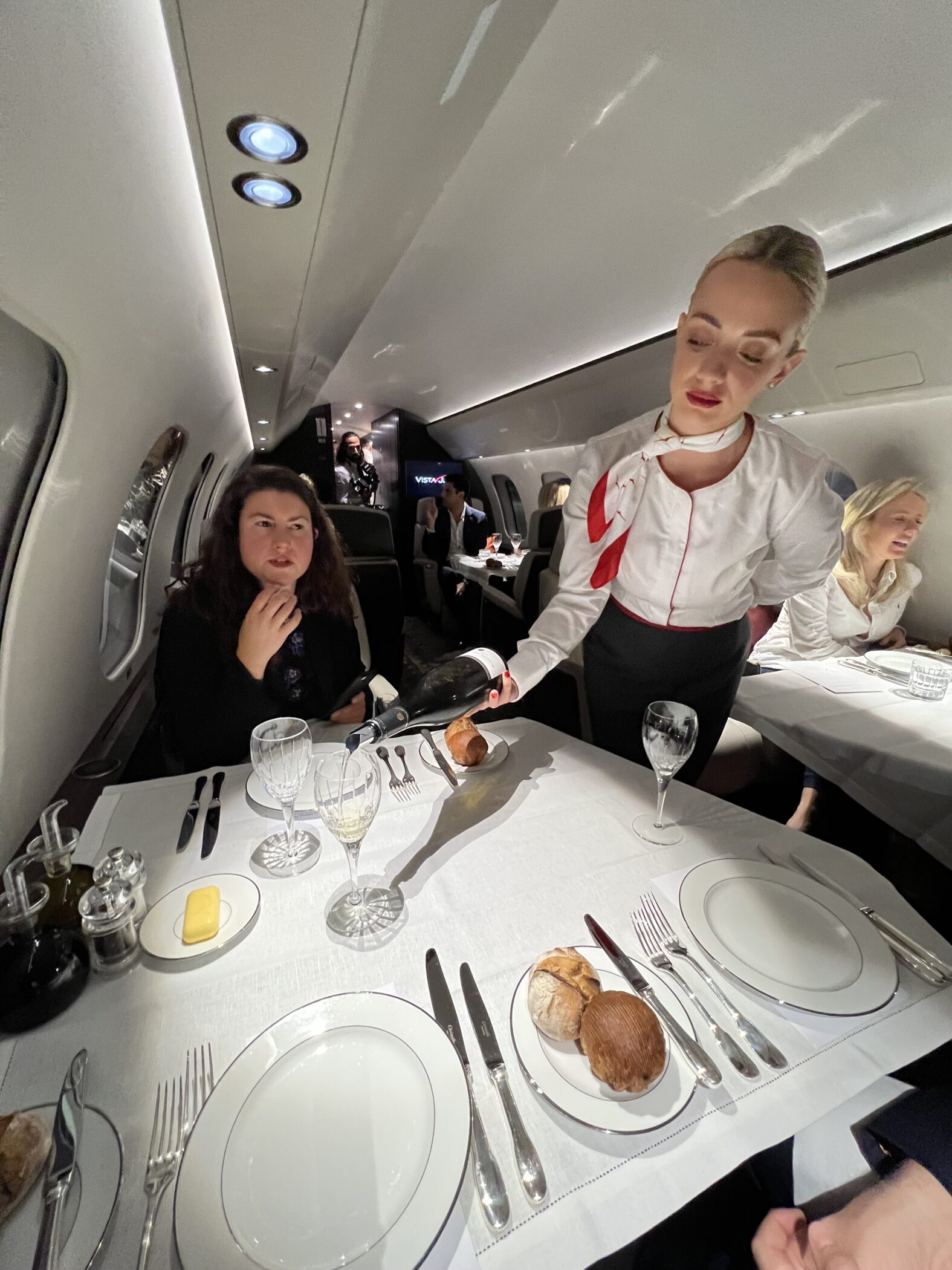 Sabino tells Globetrender: “Say you’re staying at Four Seasons Hawaii and have tasted a dish that you want to eat on the way home. The chef can send instructions of how to recreate the dish in the air, pre cook it and then deliver it to us to serve.”

These days, many customers are much more health conscious so won’t want an elaborate, rich, multi-course meal unless it is a special occasion. In many cases, they will want to consume what they eat at home, to help them maintain their routine and diet.

He adds: “The key to success has been asking what our customers want. Six years ago, we had 32 planes – now we have 360.” 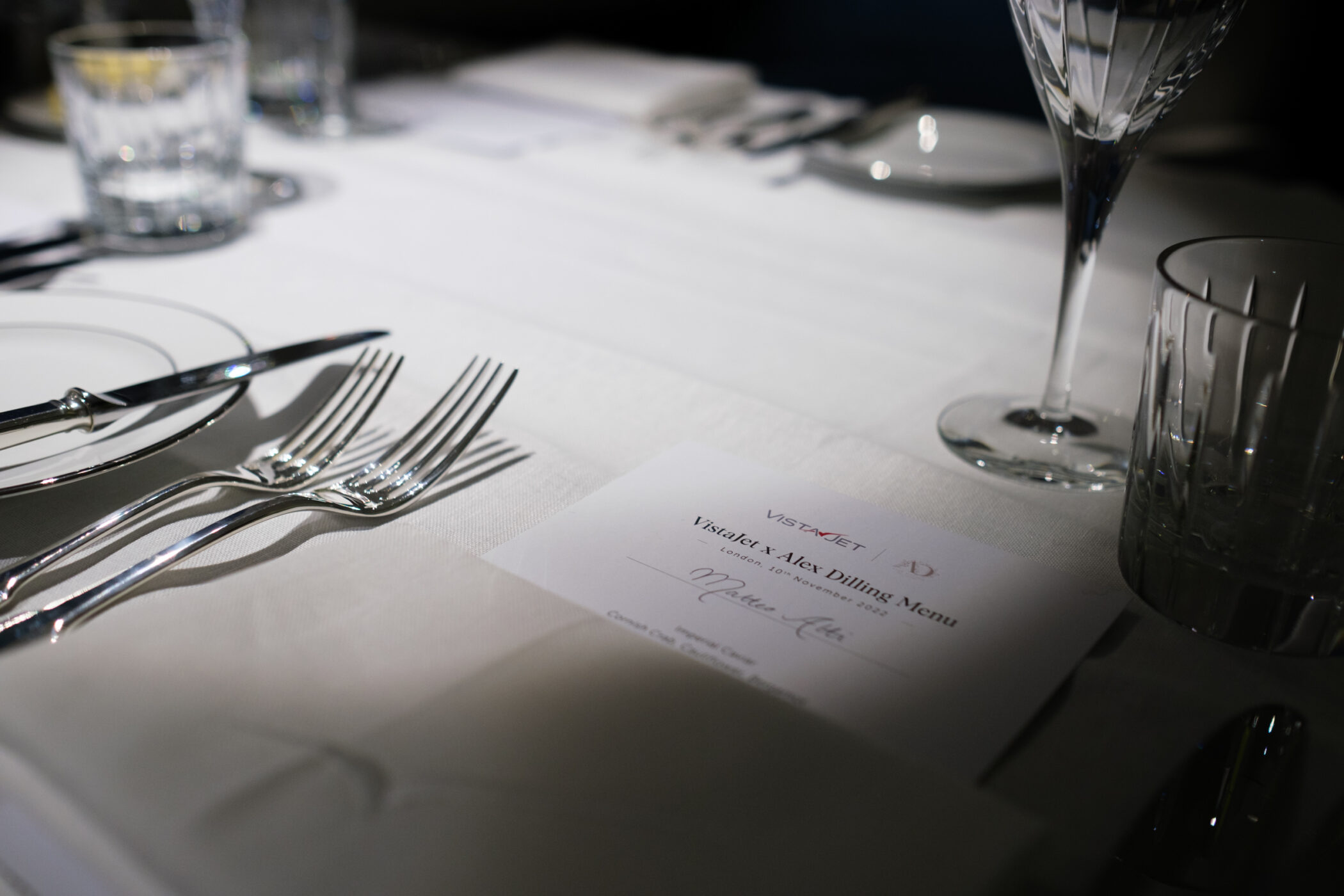 With the second-biggest fleet of private jets in the world (second only to Netjets), VistaJet can fly to 3,000 airports globally. It also has the biggest fleet of Global 7500s, which feature the largest kitchen in private aviation (it still looks tiny), complete with a double oven (normally you only get a microwave). 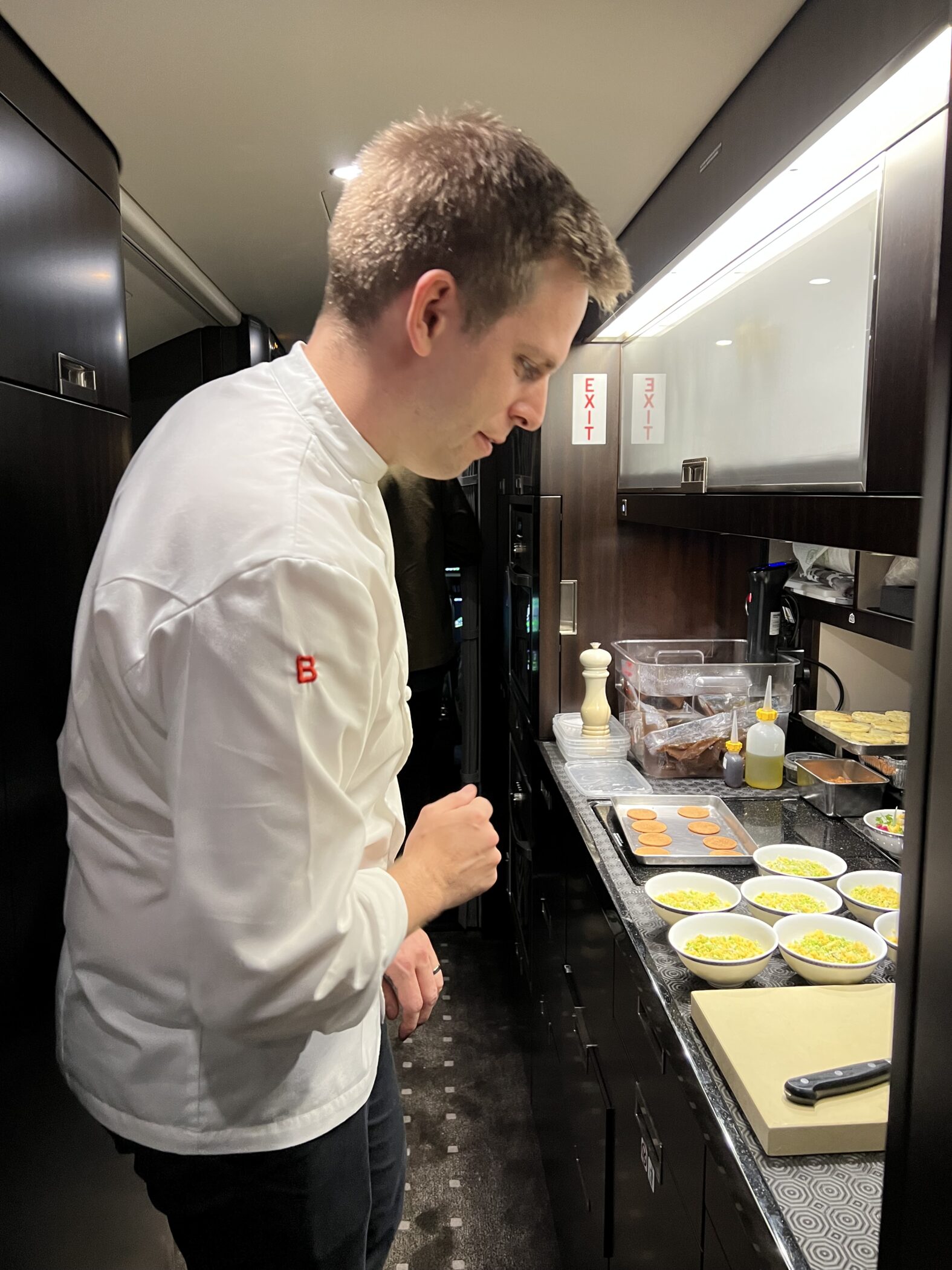 Globetrender is told that about 60 per cent of global private jet market is centred in the US but VistaJet says that when flights start crossing borders, providing high-quality private jet catering gets far more challenging, which is why it has suppliers in 96 per cent of the world so whatever passengers want, they can get.

Stepping on board the Bombardier Global 7500 plane, I immediately see this is a slender but beautifully appointed plane. It has an incredible range allowing it to fly 17 hours nonstop – that means you could charter it to go from London to Australia or Antarctica, if you wanted to.

Up to 14 people can be accommodated for a meal (single seats swivel and tables can slide out to create a more convivial set-up). There is also a lounge with a sofa and a TV, a bedroom, and a washroom at the back. 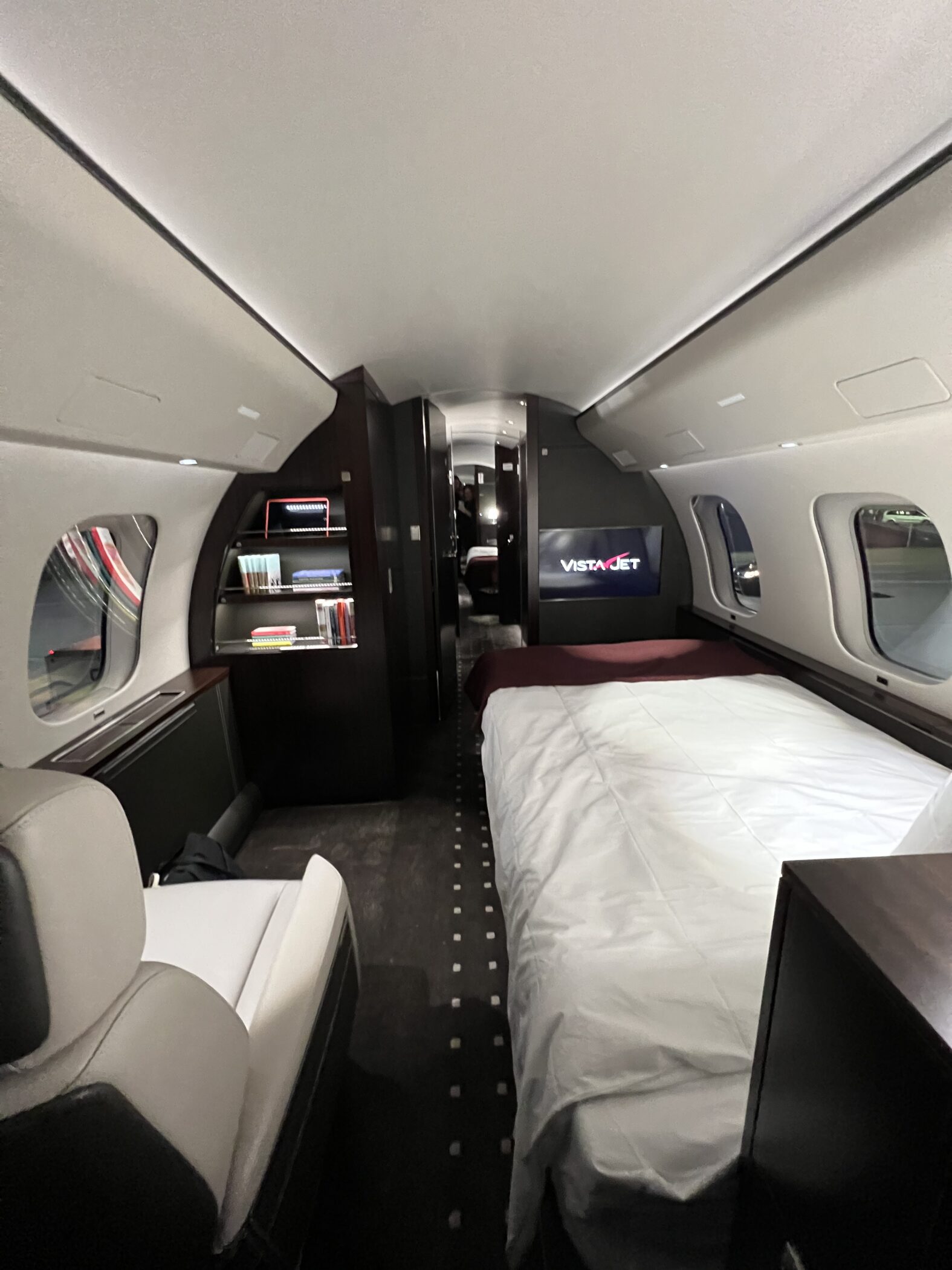 Each room has sliding sound-proof doors for privacy. I also noticed that the windows are huge – much bigger than on normal airlines, and align with the seats for the best possible views (apparently this isn’t always the case on private jets).

For families travelling with kids, it’s reassuring to know that all crew have prestigious Norland nanny training in England. On this plane, there is also a crew rest area for them to sleep, which again, is often not available.

VistaJet’s partner chefs have been recruited to reformulate some of the iconic dishes that they serve in their restaurants, as well as create exclusive meals that taste great on a private jet, where the air can be dryer and the pressure can affect your senses.

Working with over 100 of the most sought-after private chefs and Michelin-starred restaurants, VistaJet’s partners range from Nuhma Tuazon in New York and Zeffirino in Genoa; to Ivan Alvarez at the Ithaafushi – the Private Island, Maldives, and the Origin Grill at the Shangri-La in Singapore. 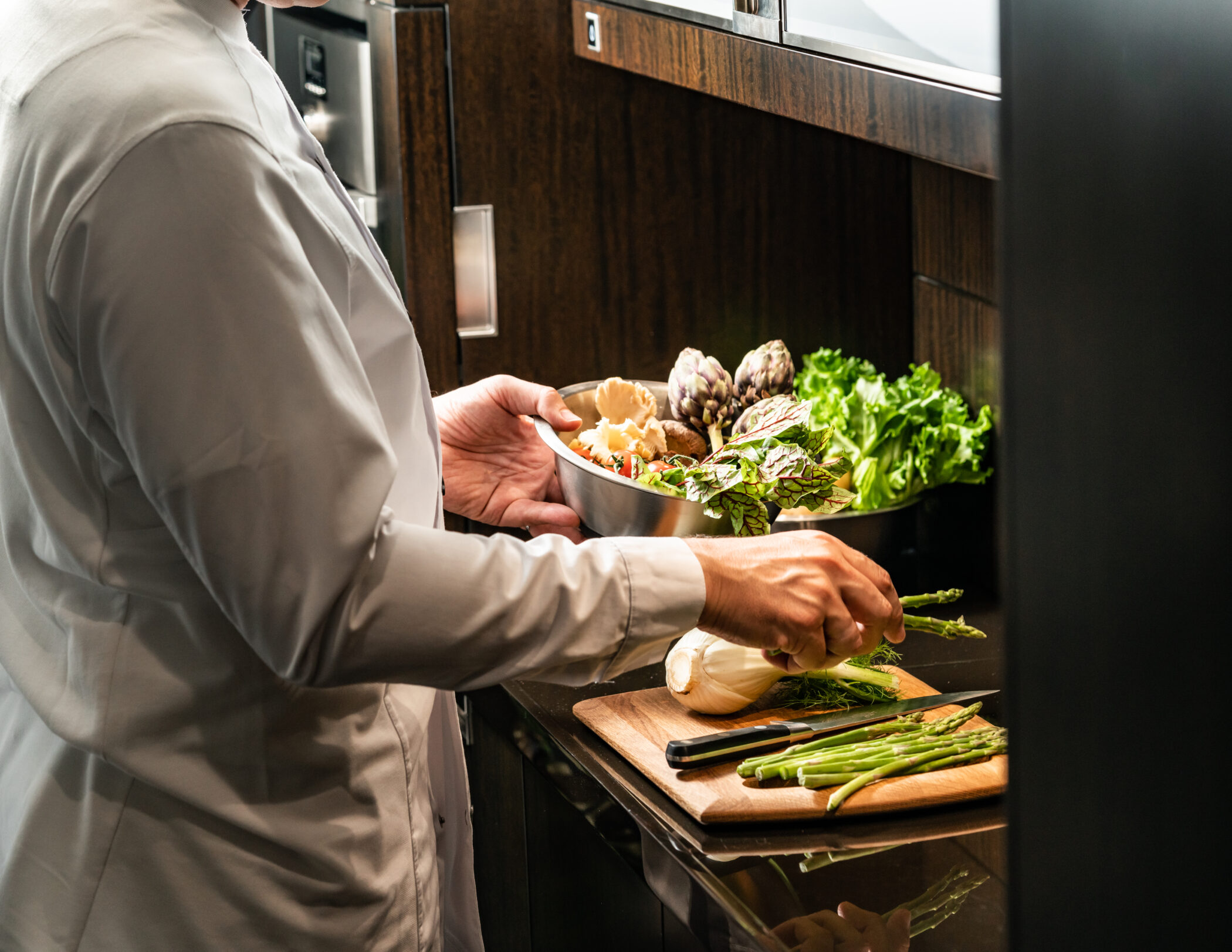 VistaJet also has a partnership with Taj Hotels around the world, including the Varq at Taj Exotica Resort and Spa, the Palm Dubai; House of Ming at Taj Mahal Hotel New Delhi; Wasabi by Morimoto at Taj Mahal Palace Mumbai; and Thai Pavilion at the President, Mumbai.

Sourcing specific ingredients can take a full day, while up to six hours might be needed to take food from the kitchen to the aircraft. Menus are finalised at least 24 hours before departure to ensure sourcing and preparation standards. 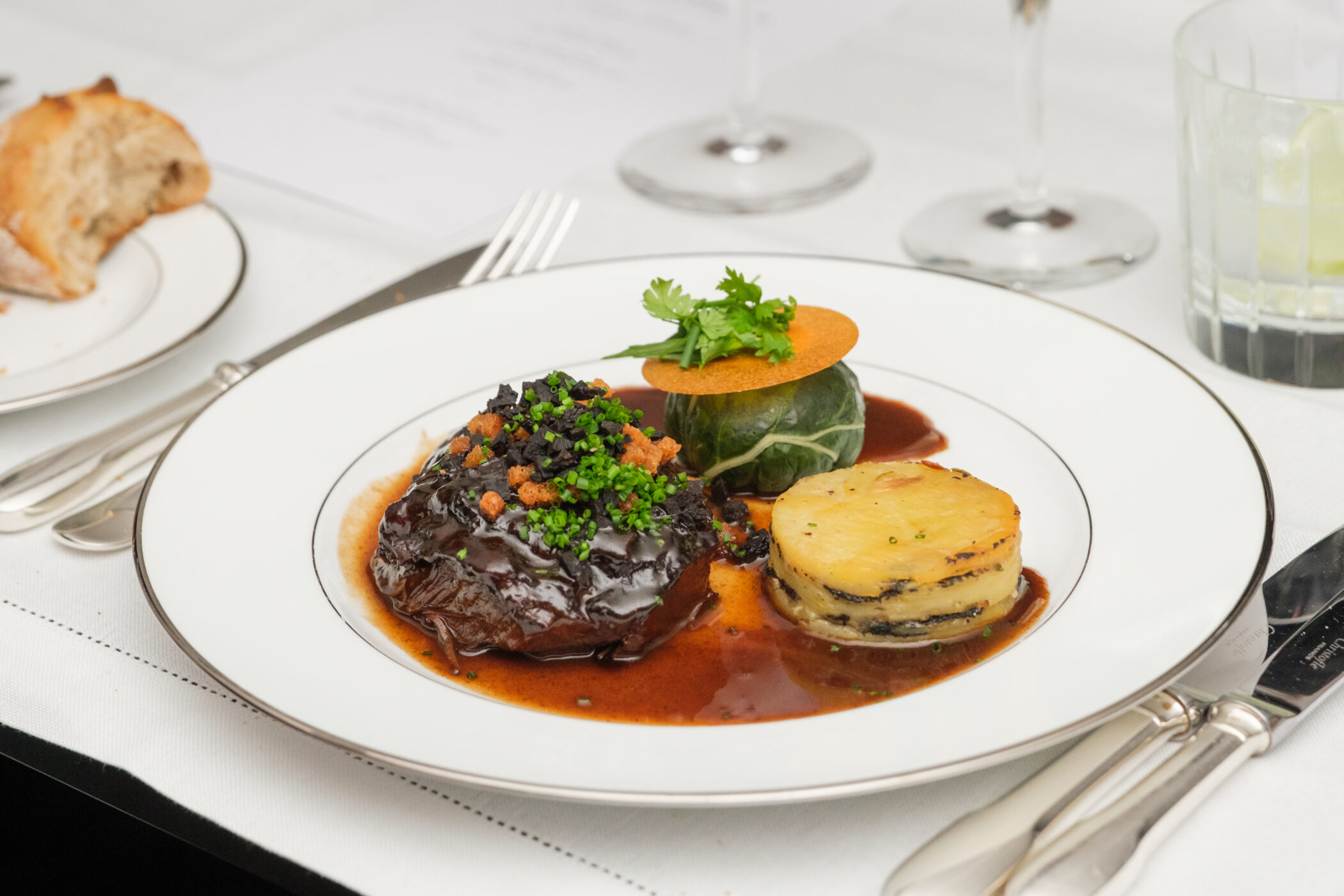 The private chef or restaurant starts creating the dishes. At this point any allergies, intolerances or other dietary needs will have been checked several times. Hot dishes are freshly prepared by hand and par-cooked. Ingredients are packed into over-ready containers, and then blast-chilled to lock in taste, texture and freshness.

The meals are couriered to the departure airport in refrigerated vehicles and loaded onto the jet around 90 minutes before departure. In the air, the VistaJet cabin host will finish cooking the food before it is expertly presented and served to passengers. 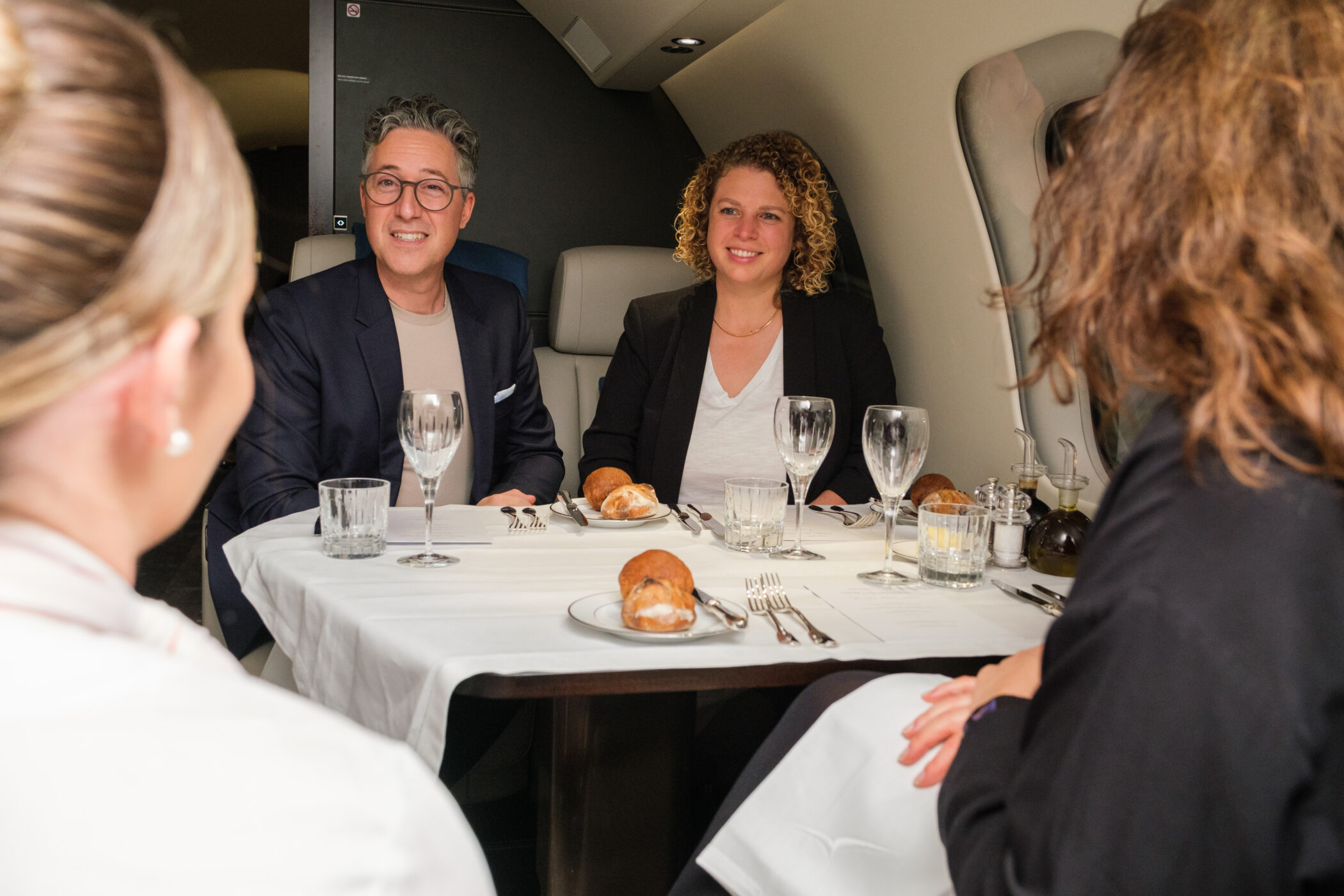 All VistaJet cabin hosts are trained by the British Butler Institute, certified up to Level 2 in wine and spirits training, and are food-safety qualified. They have also received expert plating tutorials from chefs specialising in different cuisines.

Our VistaJet experience began at the lounge in Farnborough airport, where we were served champagne and plates of delectable fresh canapes by specialist English caterer Bon Soirée. 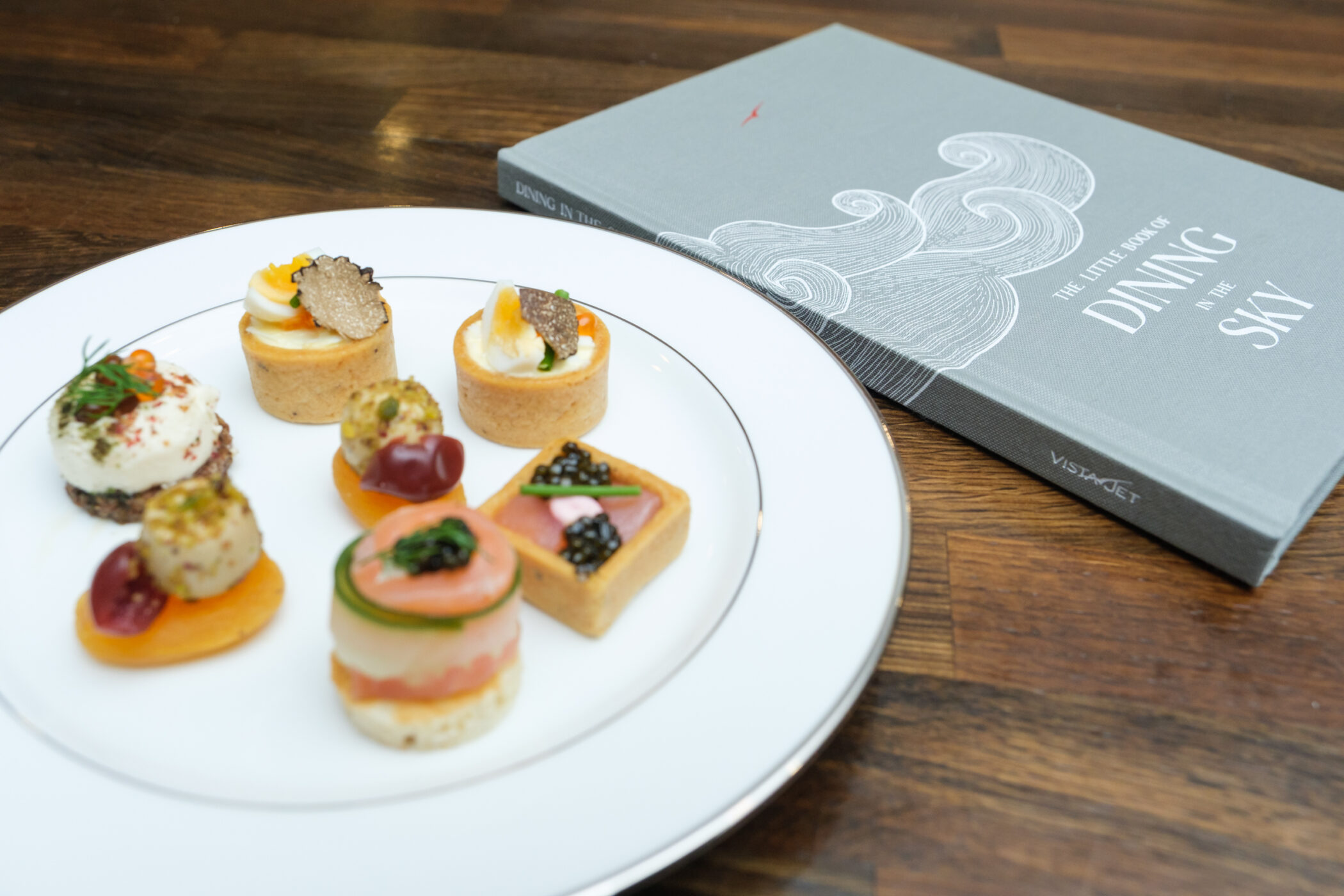 Once on board, chef Alex Dilling (pictured below) personally welcomed us and presented a three-course menu of dishes usually eaten at his London restaurant, including the signature “Hazelnut from Jura” with brandy sabayon and Tahitian vanilla that takes the form of an orb decorated with nibs of hand-piped Chantilly cream. 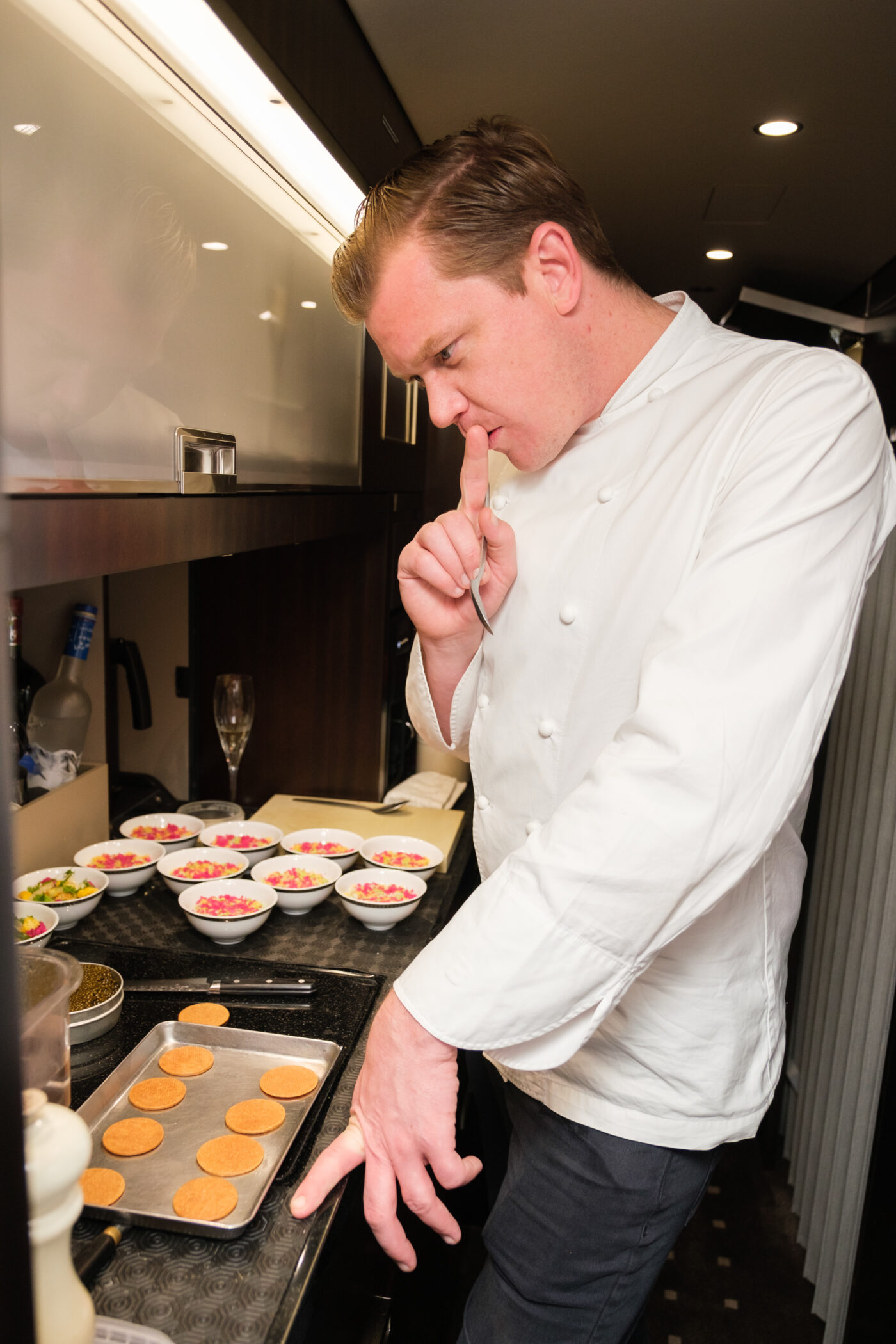 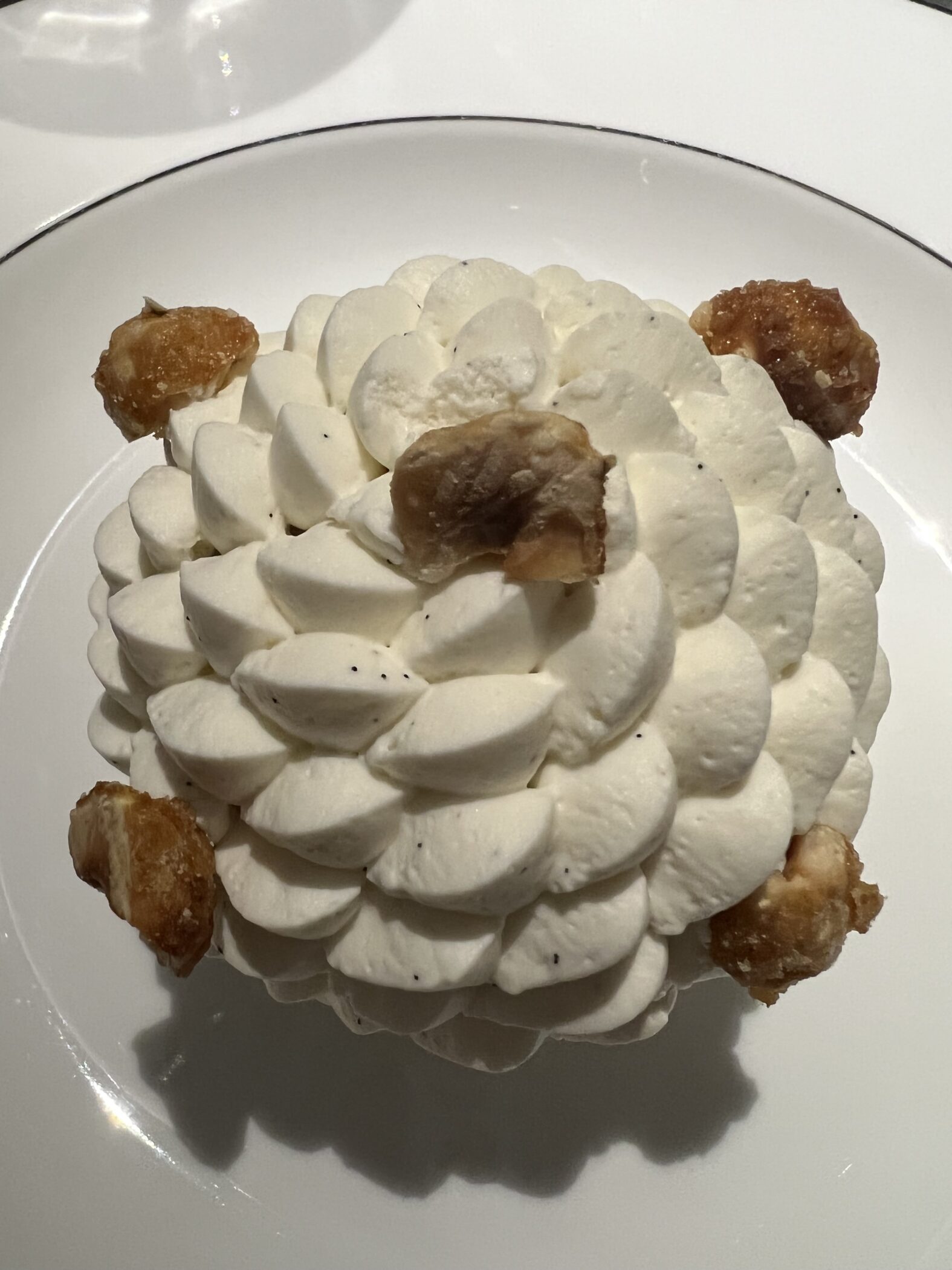 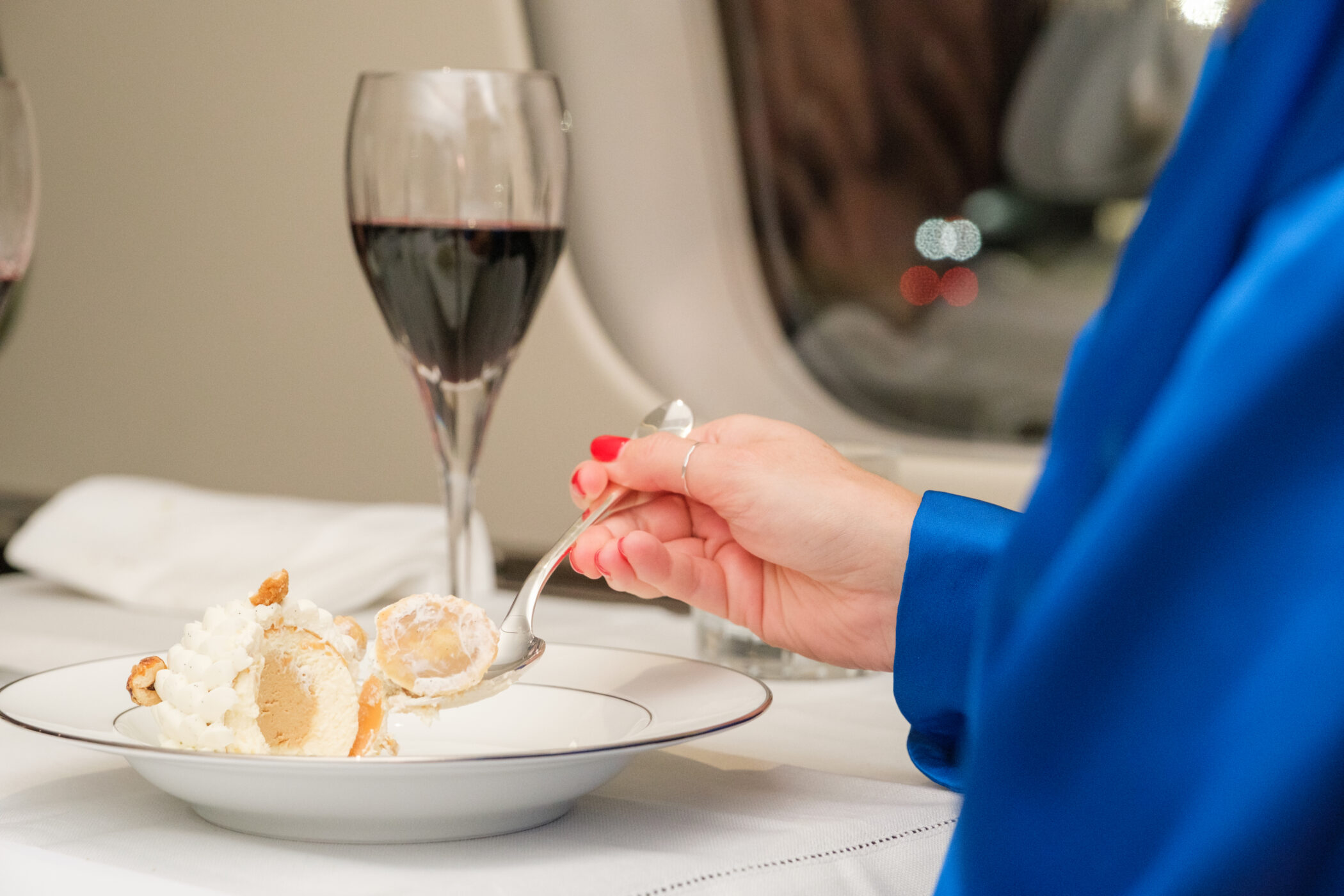 Being vegetarian, I was served cauliflower “Royale” with pickled vegetables, celeriac, bergamot and sourdough croutons. (The others had caviar with gold leaf.) The presentation was faultless.

On the side were two of the most moreish, crusty bread rolls I have ever tasted – one was filled with caramelised onions. There were also very pleasing soap-shaped bars of butter, monogrammed with Alex Dilling’s initials. (A very nice touch – and just soft enough to effortlessly spread.) 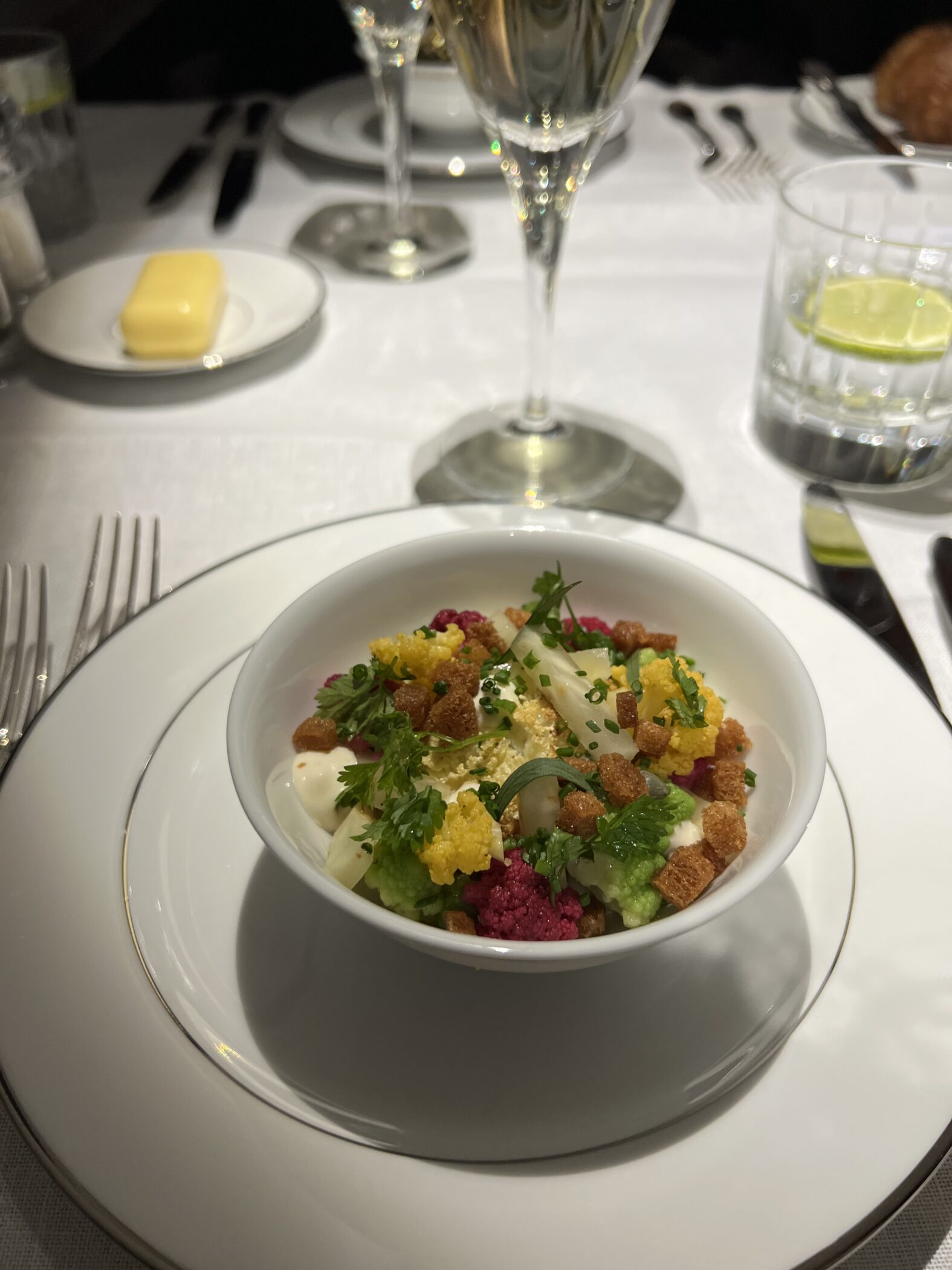 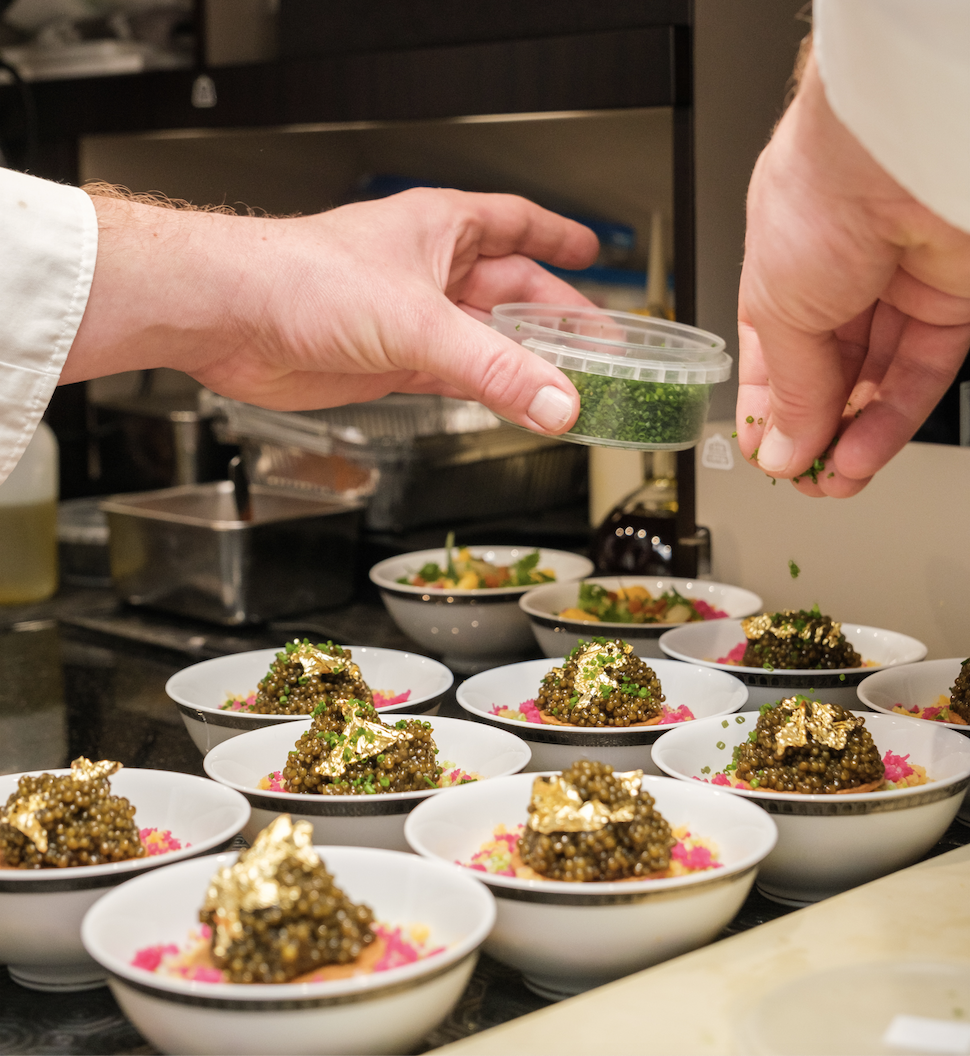 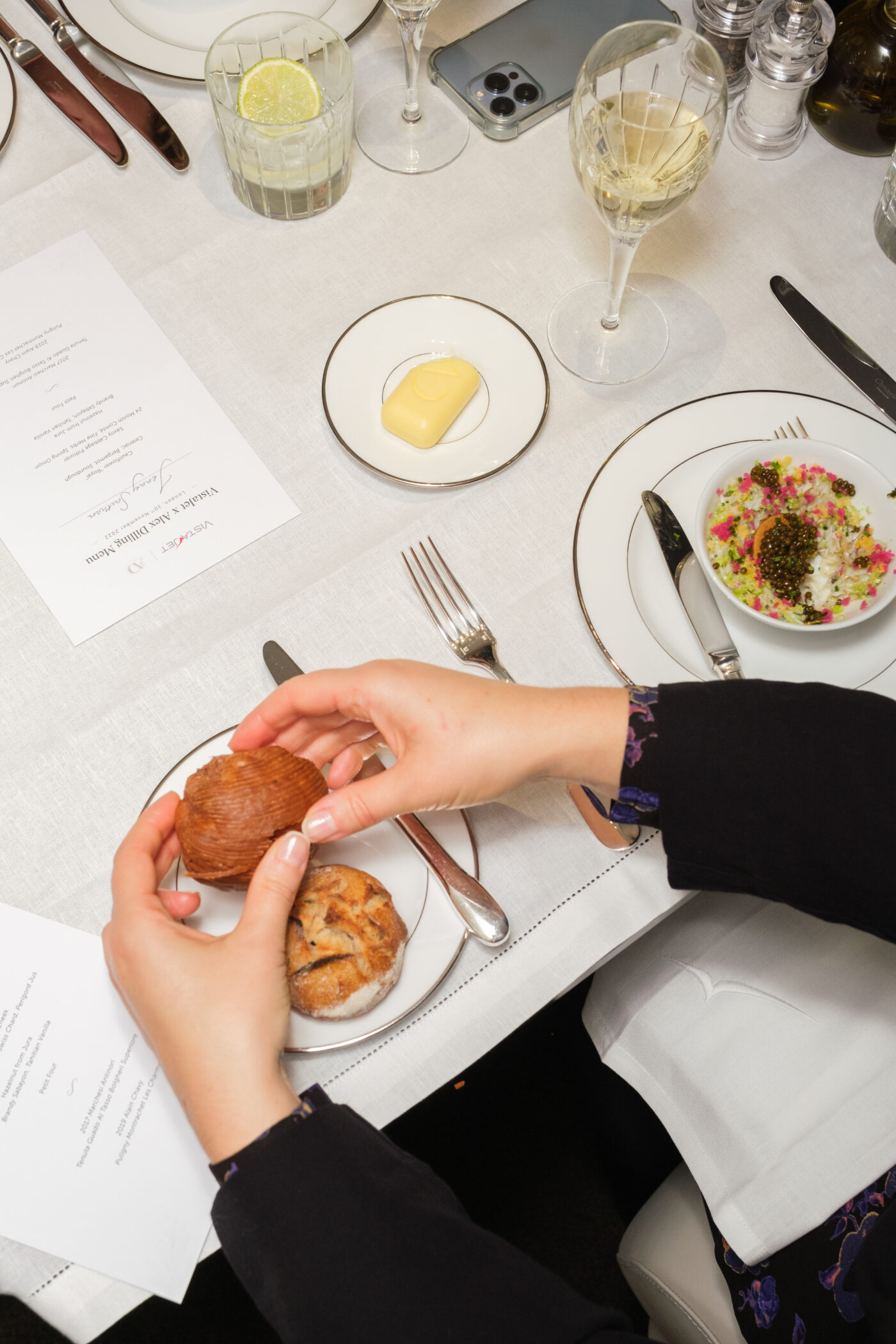 Then there was a Savoy cabbage pithivier (a small pie made with delicate buttery crisp pastry) filled with 24-month Comté cheese, fine herbs and spring onion. Both dishes were extremely flavoursome and delectable. Finally, to end, there was a platter of petit fours – straight from the restaurant. 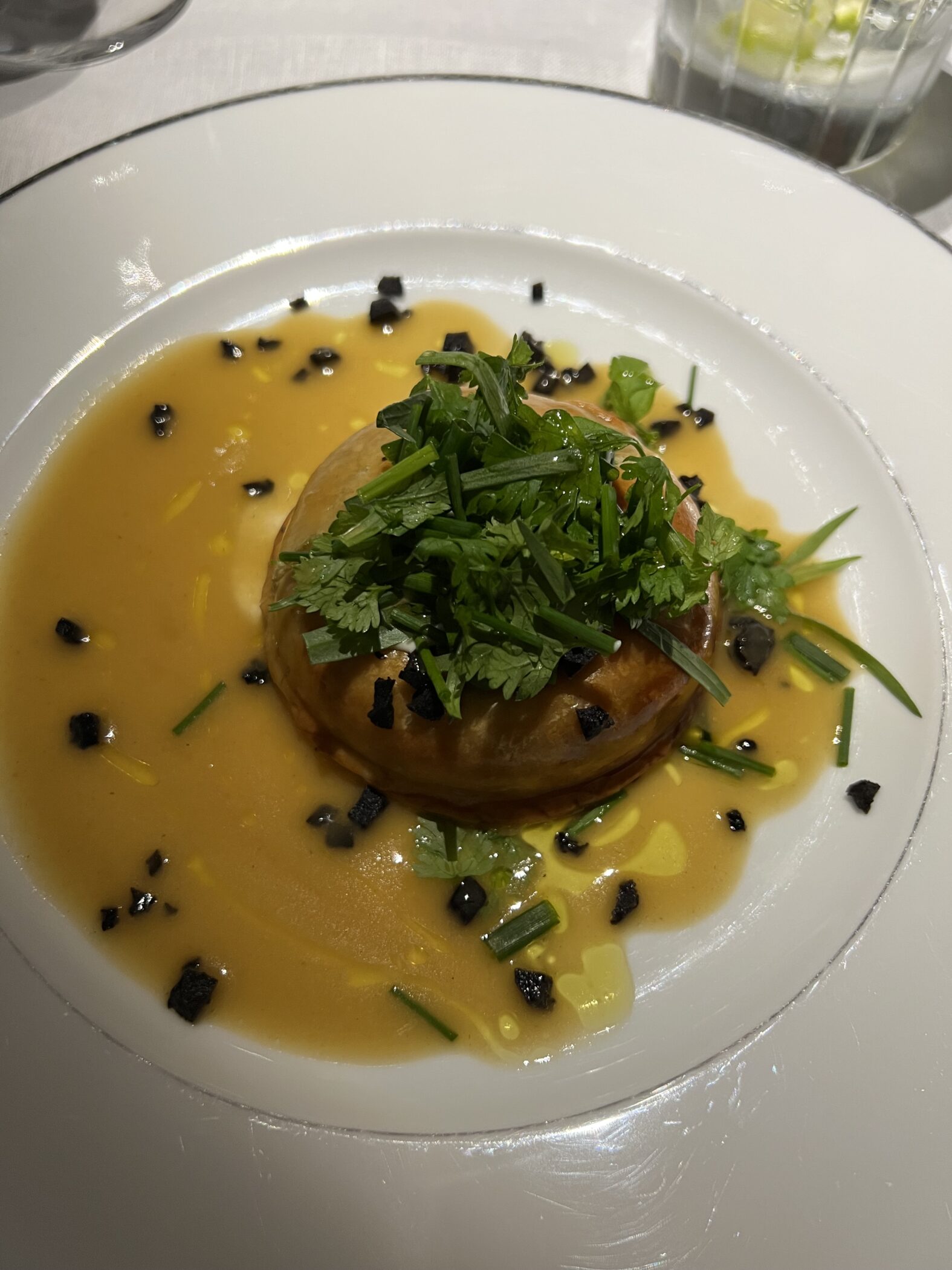 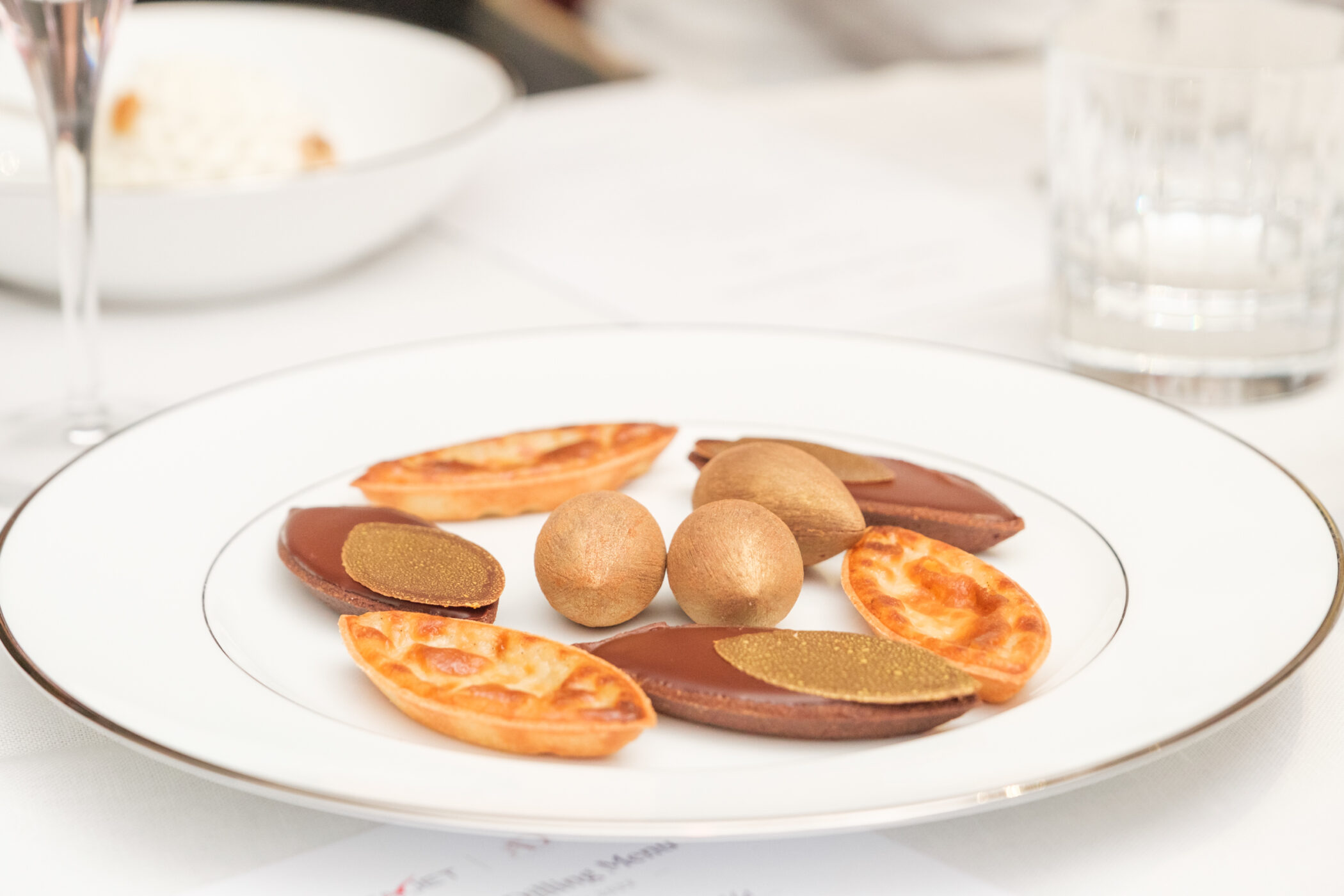 Of course, every effort can be made to curate a personalised wine list too but in this case, I was more than happy for VistaJet to make the selection.

To deliver the world’s best gourmet cuisine in the sky – wherever you happen to be flying – is an unbelievable feat of ambition and logistics. This isn’t just really good airline food – this is the best of the best, tailored to every person in the cabin, whatever their preferences and requirements. Who said money can’t buy happiness?