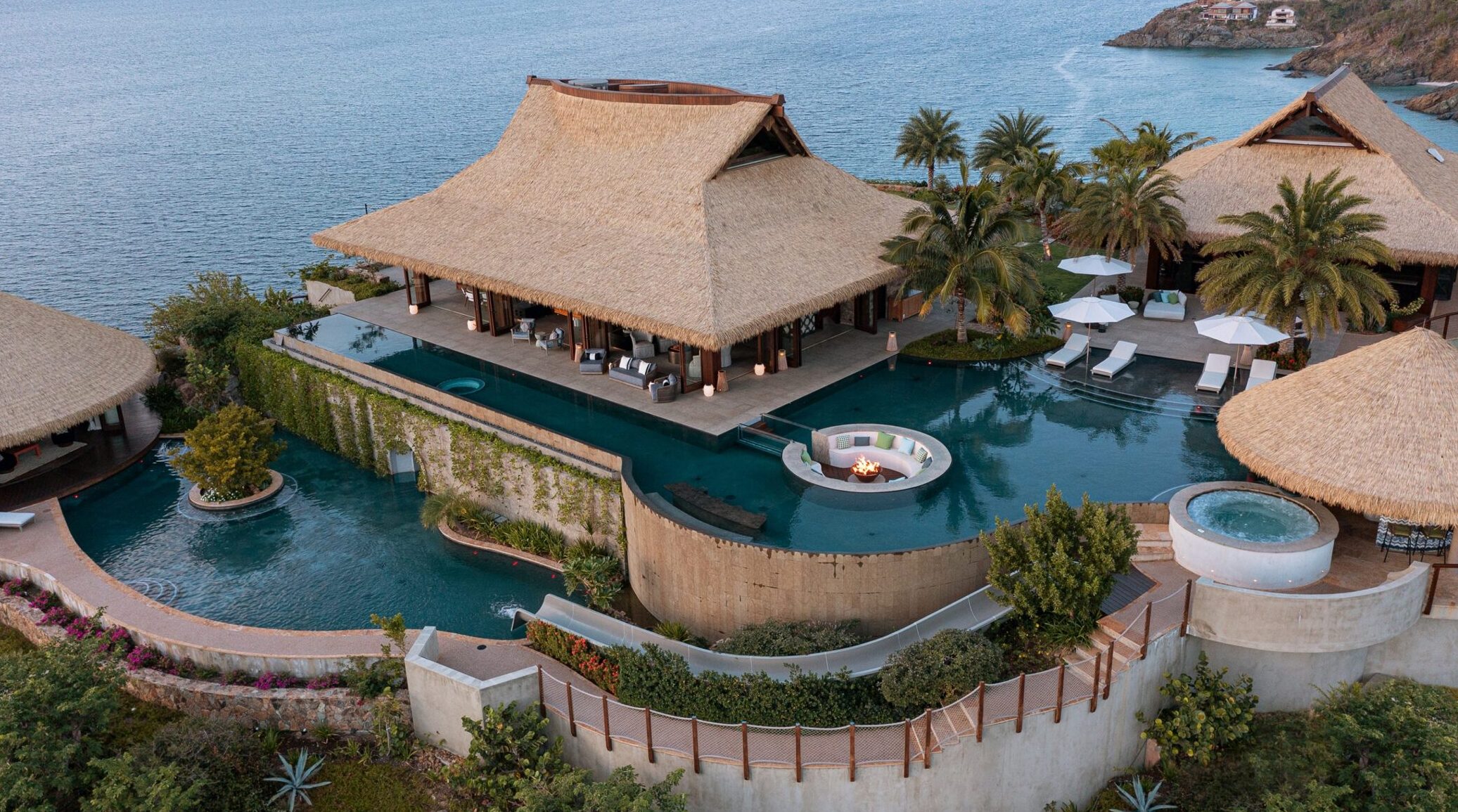 In June, I had a tour of the new Village Estate on Richard Branson’s private island Moskito, in the British Virgin Islands. (His other private island is Necker, just around the bay.)

However, I had to wait for its public launch this month to give reveal what it’s like. In short – absolutely mind-blowing. Even more impressive than the other three estates on the island – including Branson’s own home, which we also explored.

Owned by a millionaire British app developer (Globetrender was sworn to secrecy as to who it was), the Village Estate is the most ambitious property on Moskito Island, perched high up on a cliff with panoramic views of the sea and the island of Virgin Gorda. I also spotted a giant floating trampoline, just off the Village’s private beach. 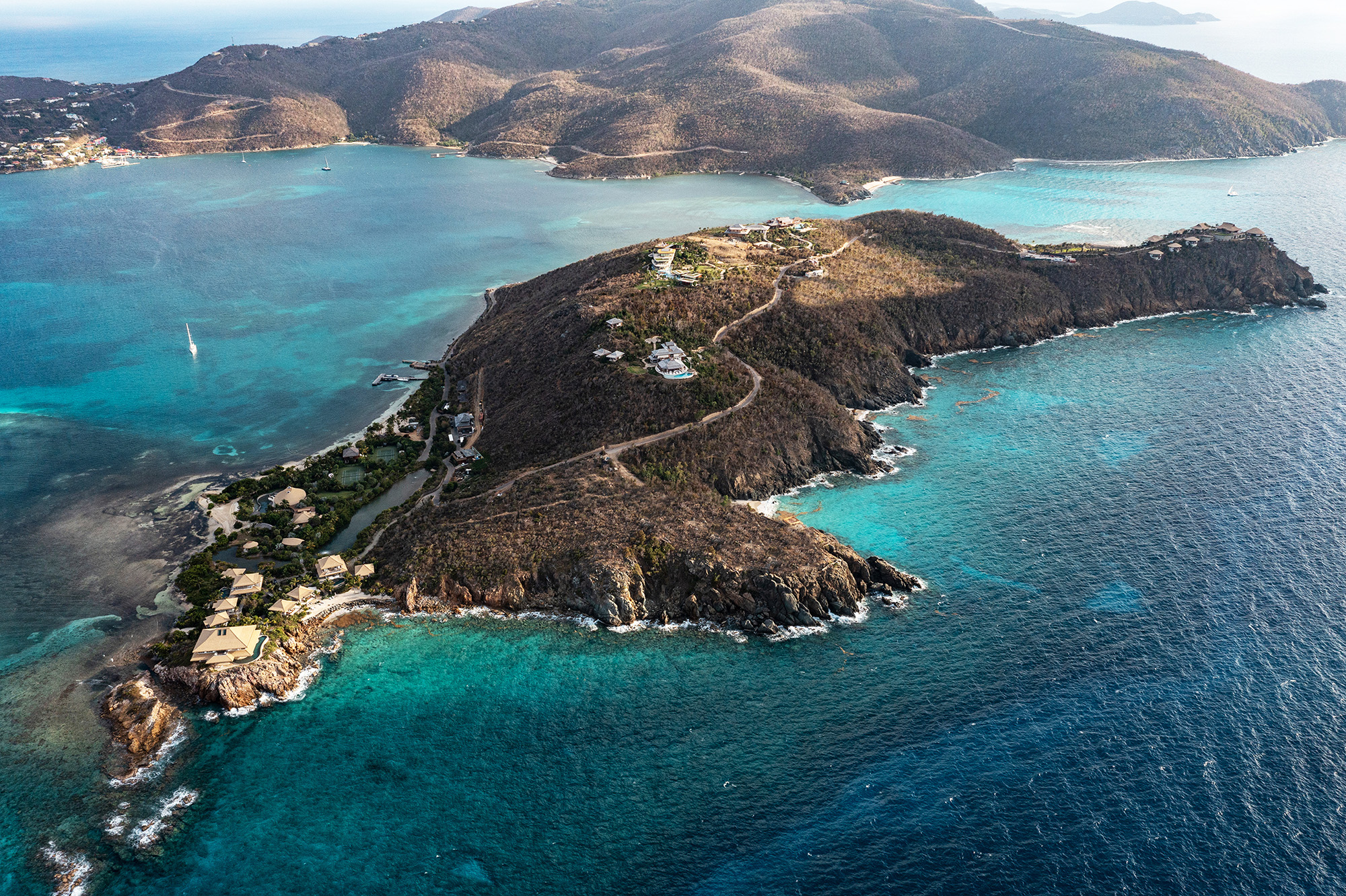 When Richard Branson bought the island, he divied up the land into ten lots and sold them to his friends to build homes on. There are six in total (including the Branson Estate, the Oasis Estate and the Point Estate) but two are not available for rental. They are all bookable through Virgin Limited Edition.

The Village Estate is the latest to come on the market but the residence itself is not new – the owners spent most of lockdown living here. That said, I was told they do have plans to make further additions to the property, including a cantilevered hot tub suspended off the edge of the cliff (coming next year) and a pub hidden in the woods. 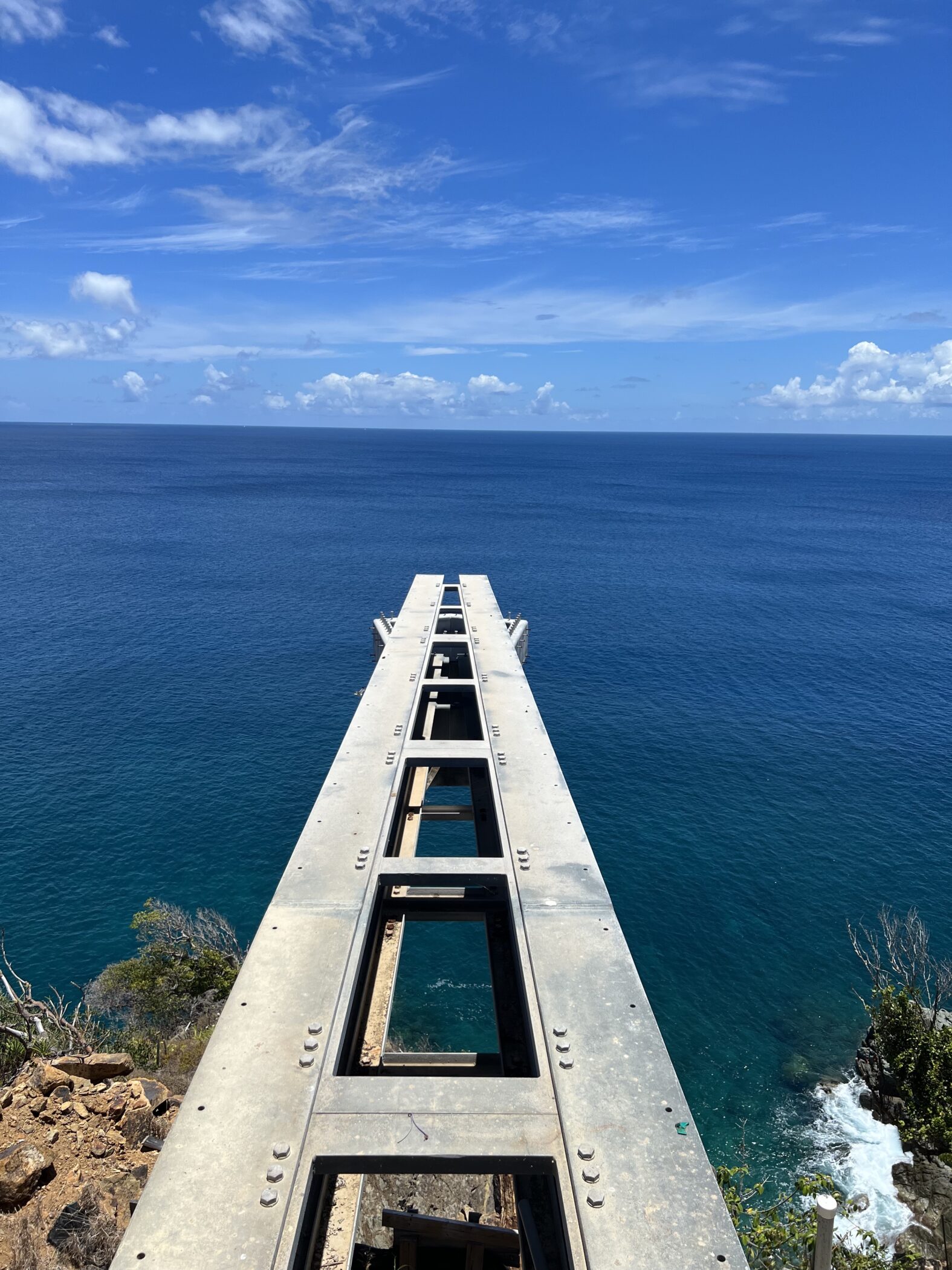 Ideal for lavish group getaways, the nine-bedroom Village Estate is accessed via a fleet of candy-coloured electric Moke buggies, which are a popular form of transport here among super-rich island-owners. 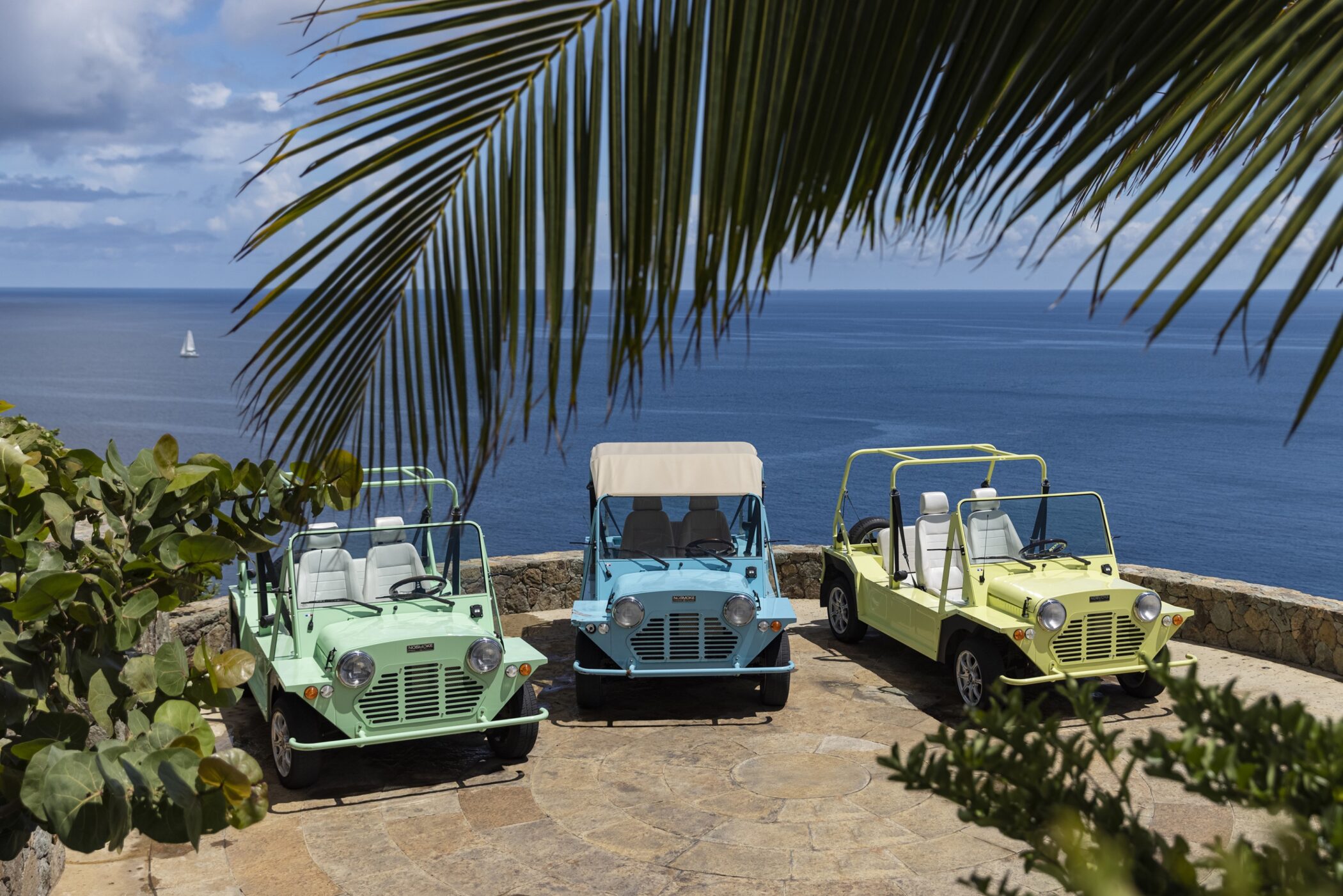 Upon arrival when you walk into the main house, which is open sided-to allow the breeze to blow through (hurricane shutters can be attached during storms), you immediately notice a striking wooden spiral staircase. Upon ascending, I found that it led to the roof, where there is a “crow’s nest” hot tub at the summit. (Not for people with vertigo.) 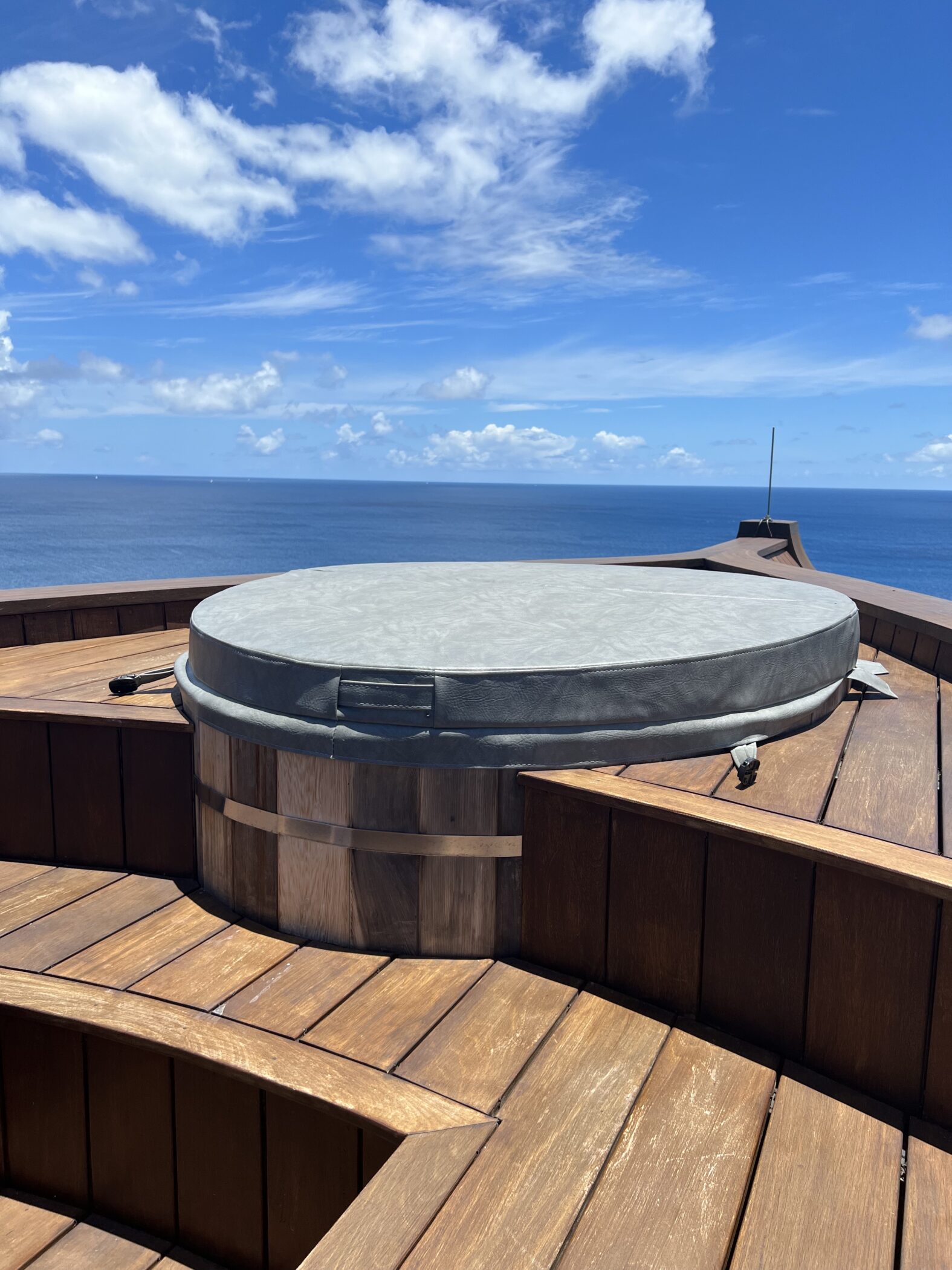 Not only that but the staircase is wrapped with audio-synced LEDs, so that the lights move to the beat of the music emitted from a “stadium-quality” sound system. 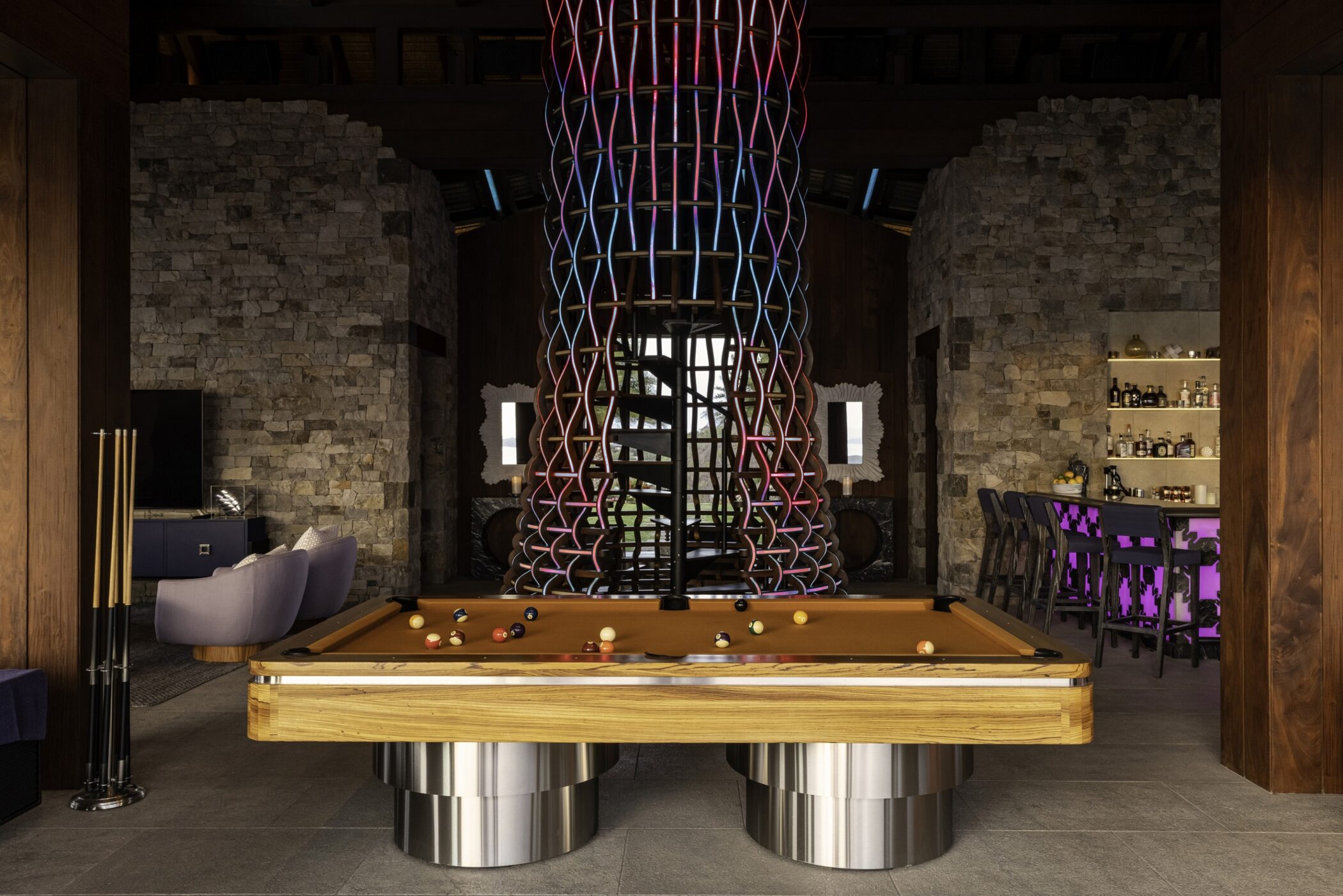 Each estate on Moskito Island has its own unique identity and the Village is no exception. The 1,681 sqm property, set in 3.5 acres of jungle, is comprised of multiple cottage-like structures with thatched roofs and hyper modern interiors. 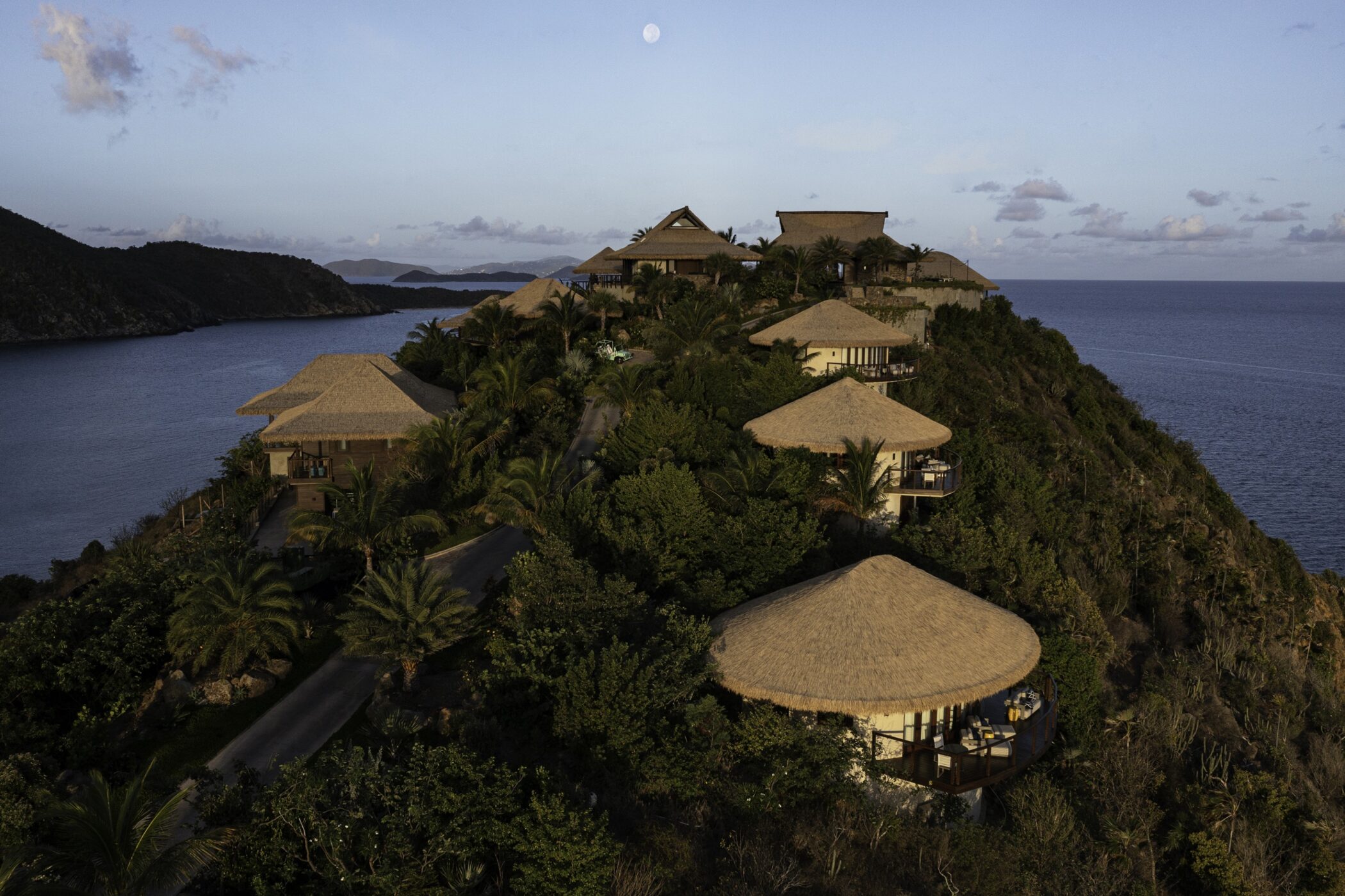 What really makes it stand-out as being one of the world’s most incredible private home rentals are its quirky features. There is a “dungeon” tunnel with a portcullis leading to the swimming pool; a hidden DJ booth that rises from the outdoor deck; and a two-story infinity pool with a slide that wraps around the edge of the estate. 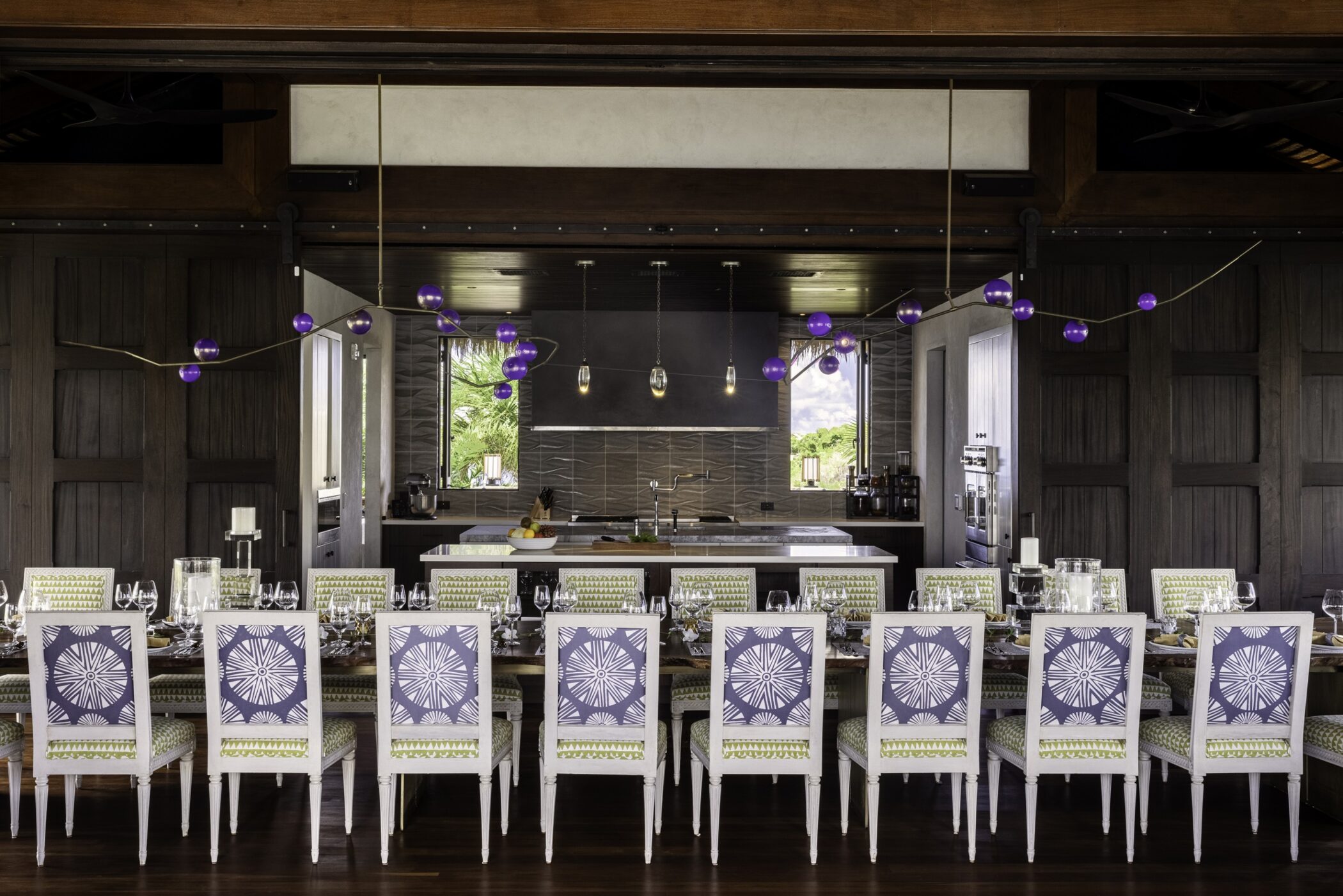 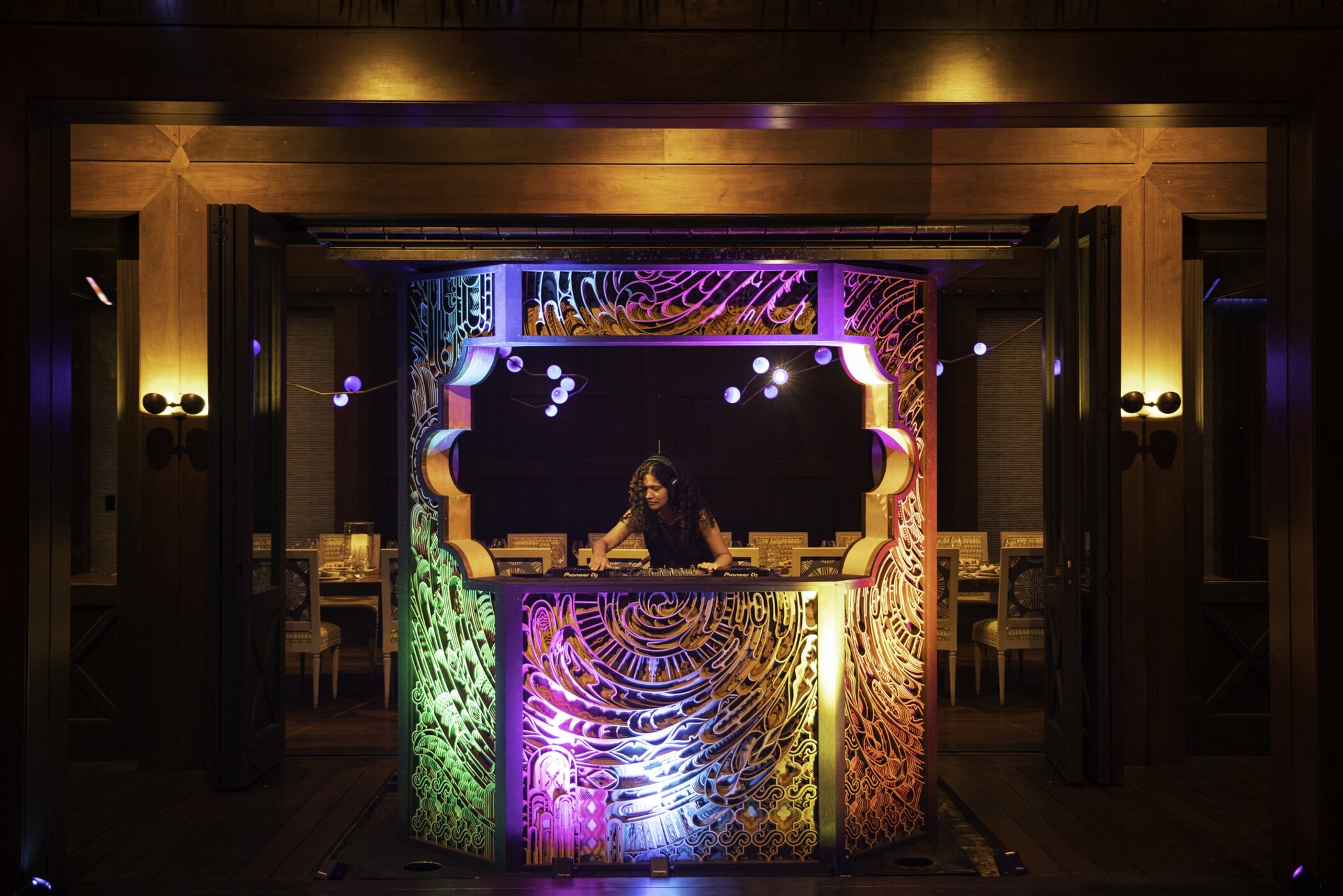 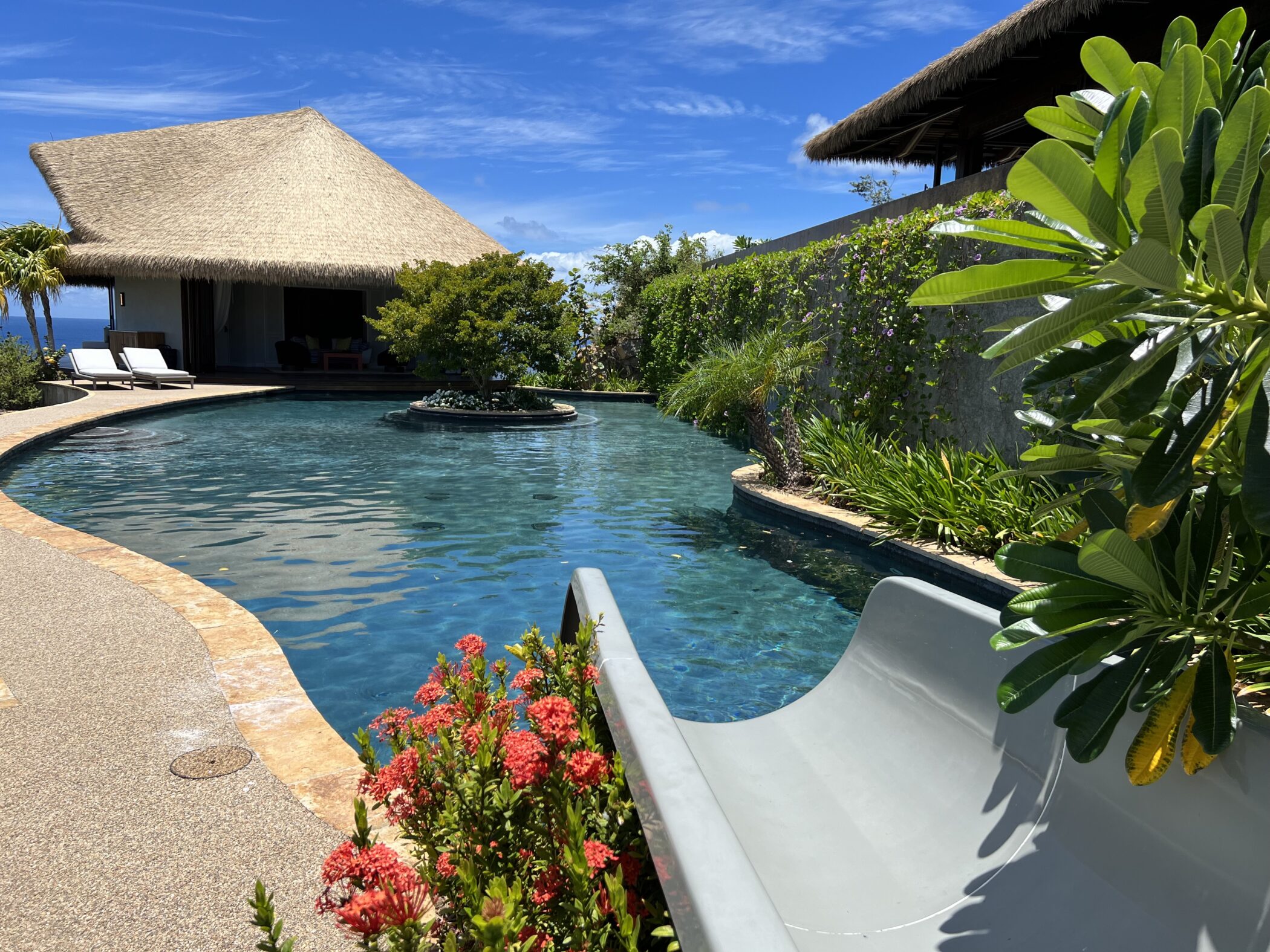 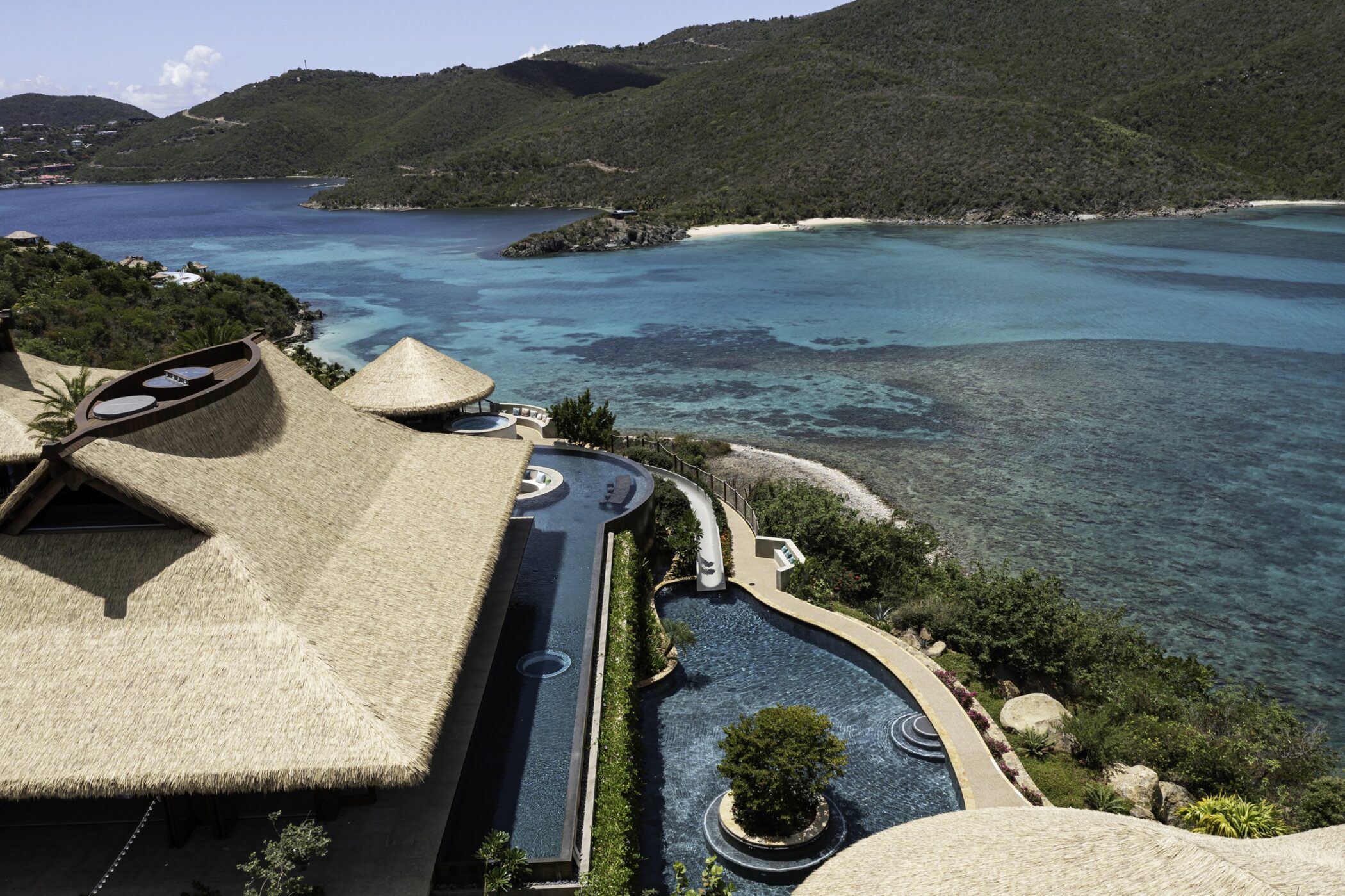 There is also a glass encased “dry pool” with sunken fire pit that is built into the centre of the swimming pool, while an eight-seater under-the-water dining table lies at the infinity-edge. 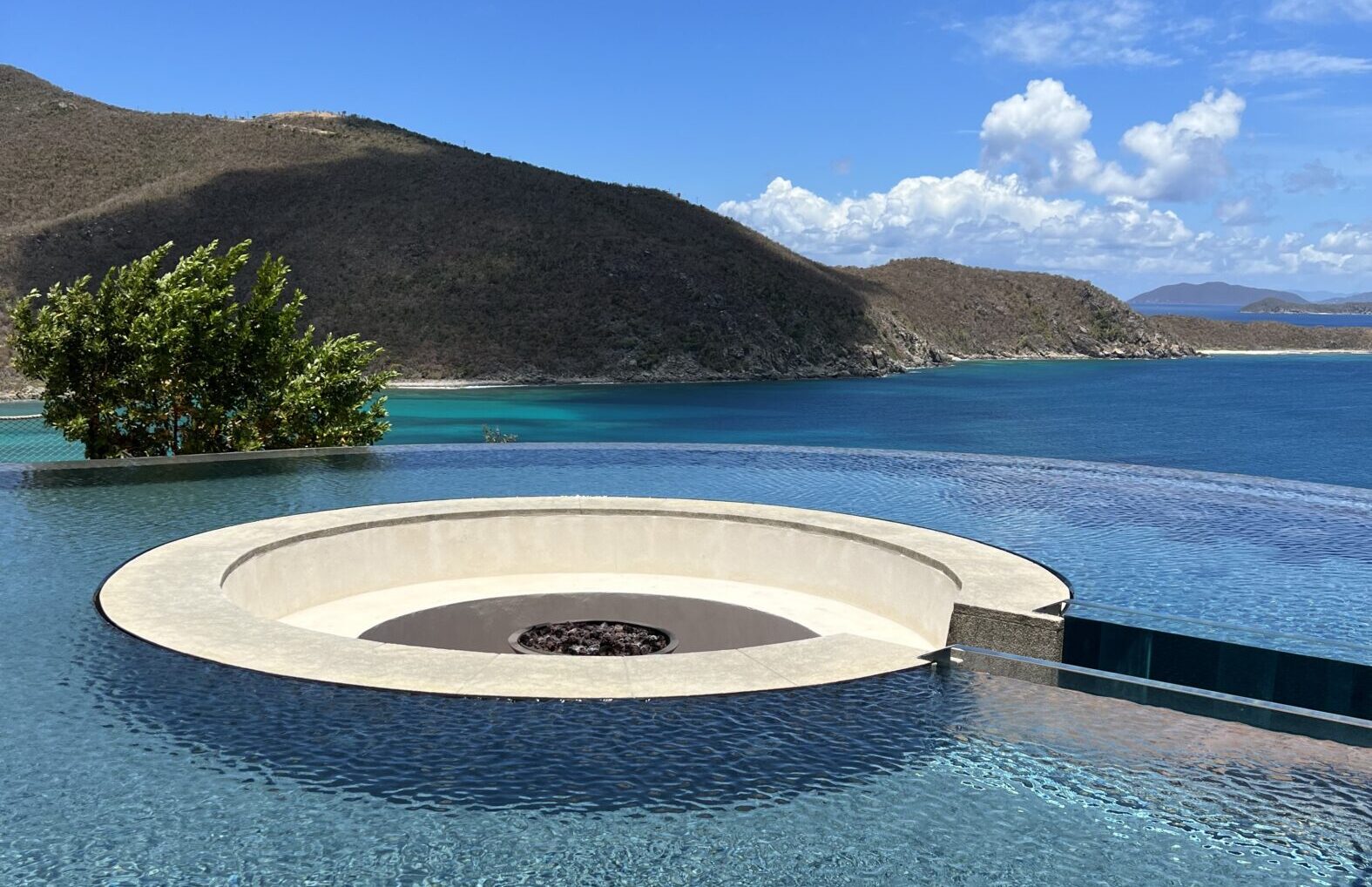 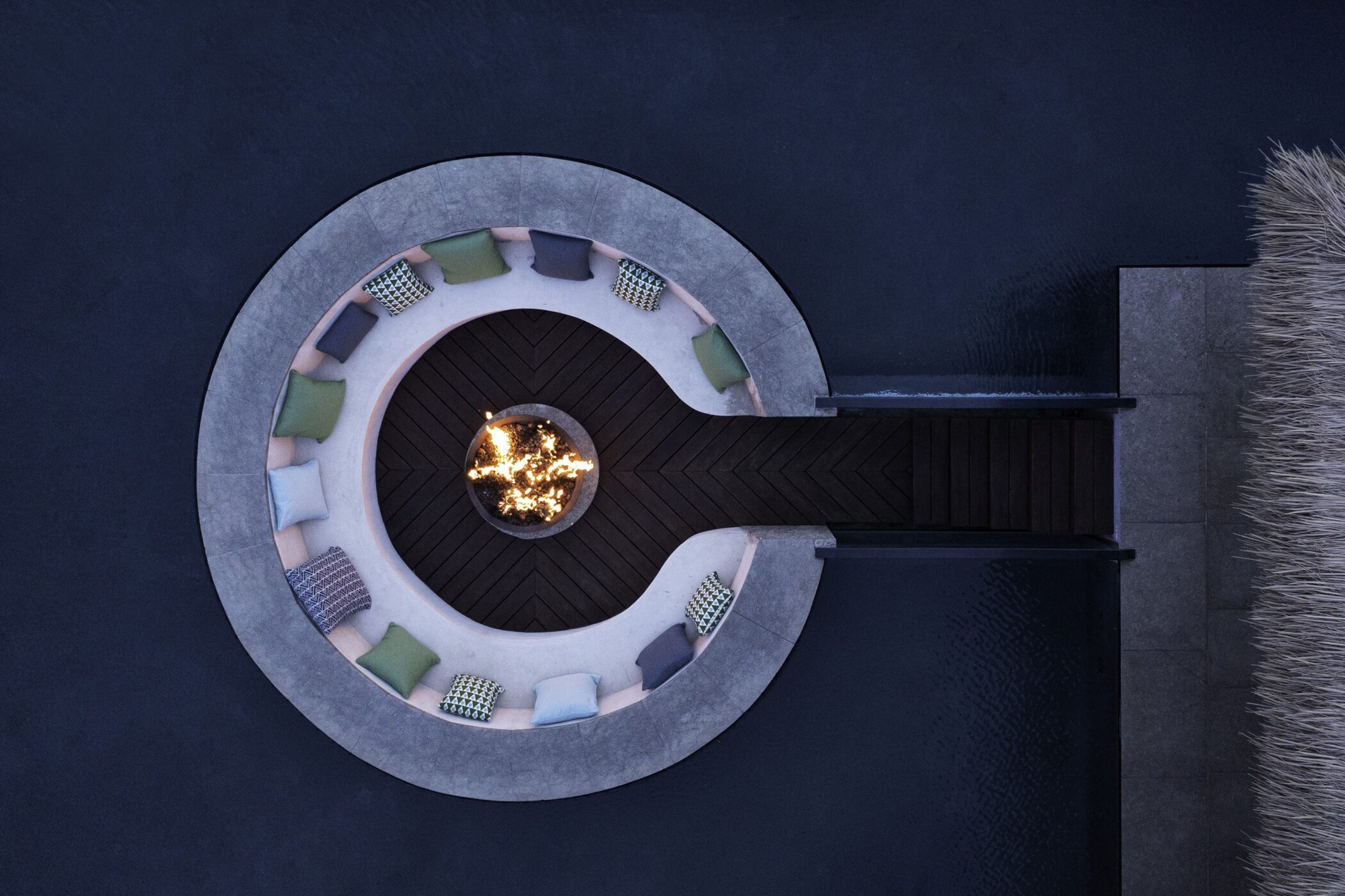 Not only that but there is a swim-up bar, a state-of-the-art cinema, gym, an al fresco pizza kitchen, ice-cold wine room, Balinese planting and organic kitchen garden for growing their own fruit, herbs and vegetables. 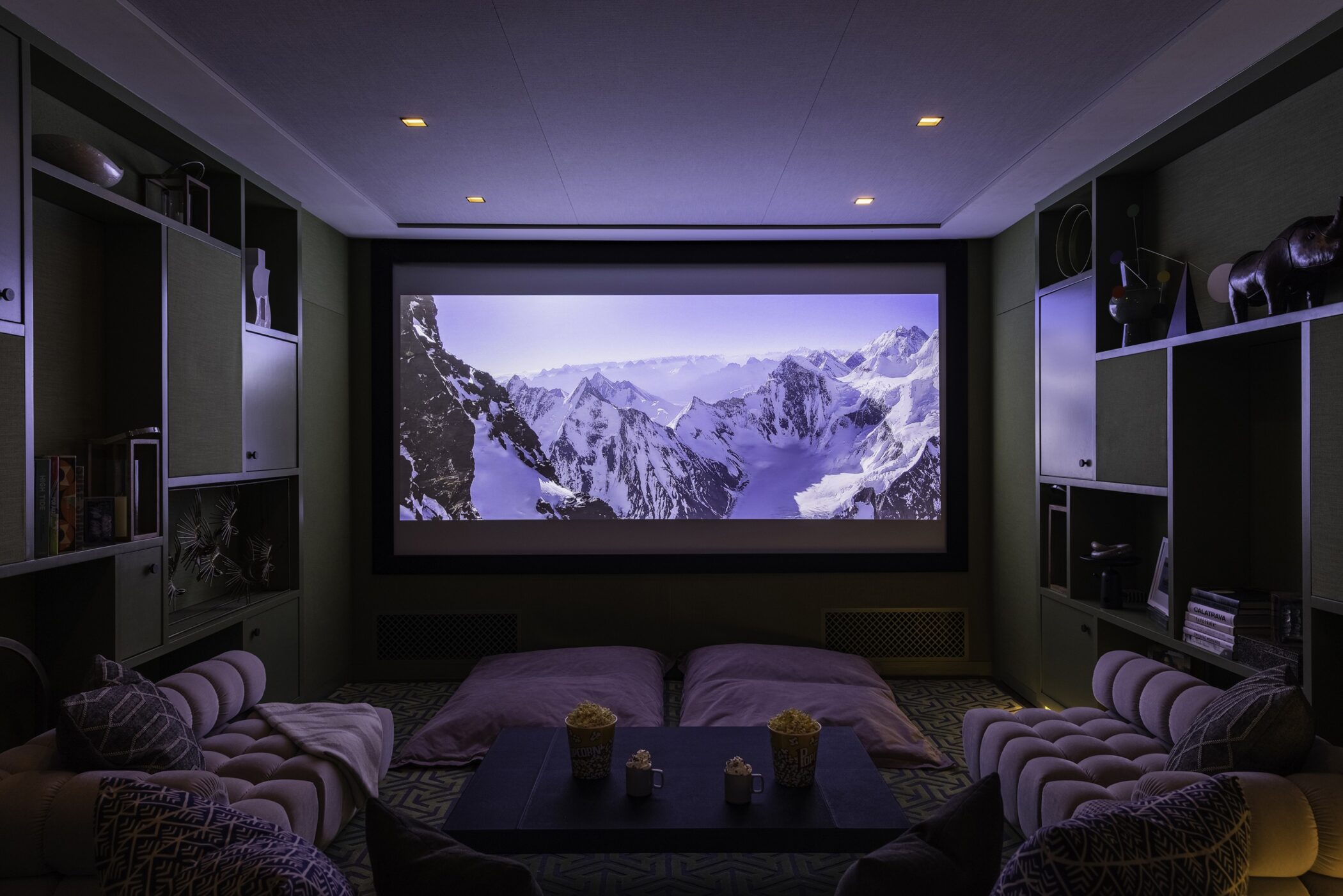 Jon Brown, managing director at Virgin Limited Edition, says: “Since Moskito’s opening late last year, we’ve been celebrated on the world stage for delivering an exceptional and extremely unique hospitality experience in the Caribbean that goes beyond the realms of traditional luxury.

“The debut of the Village is the next phase in the continuous evolution of Moskito Island – a private island escape unlike any other. 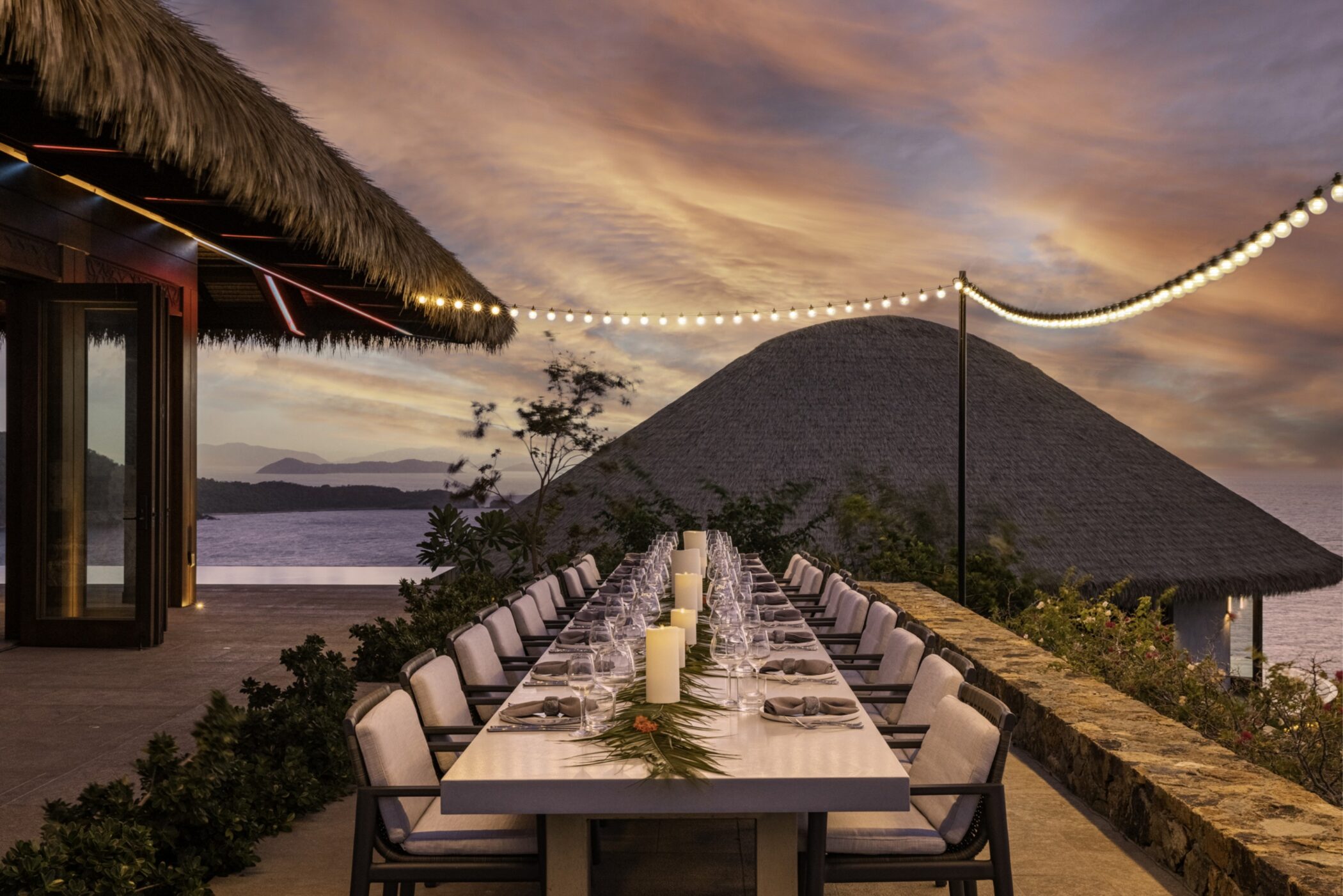 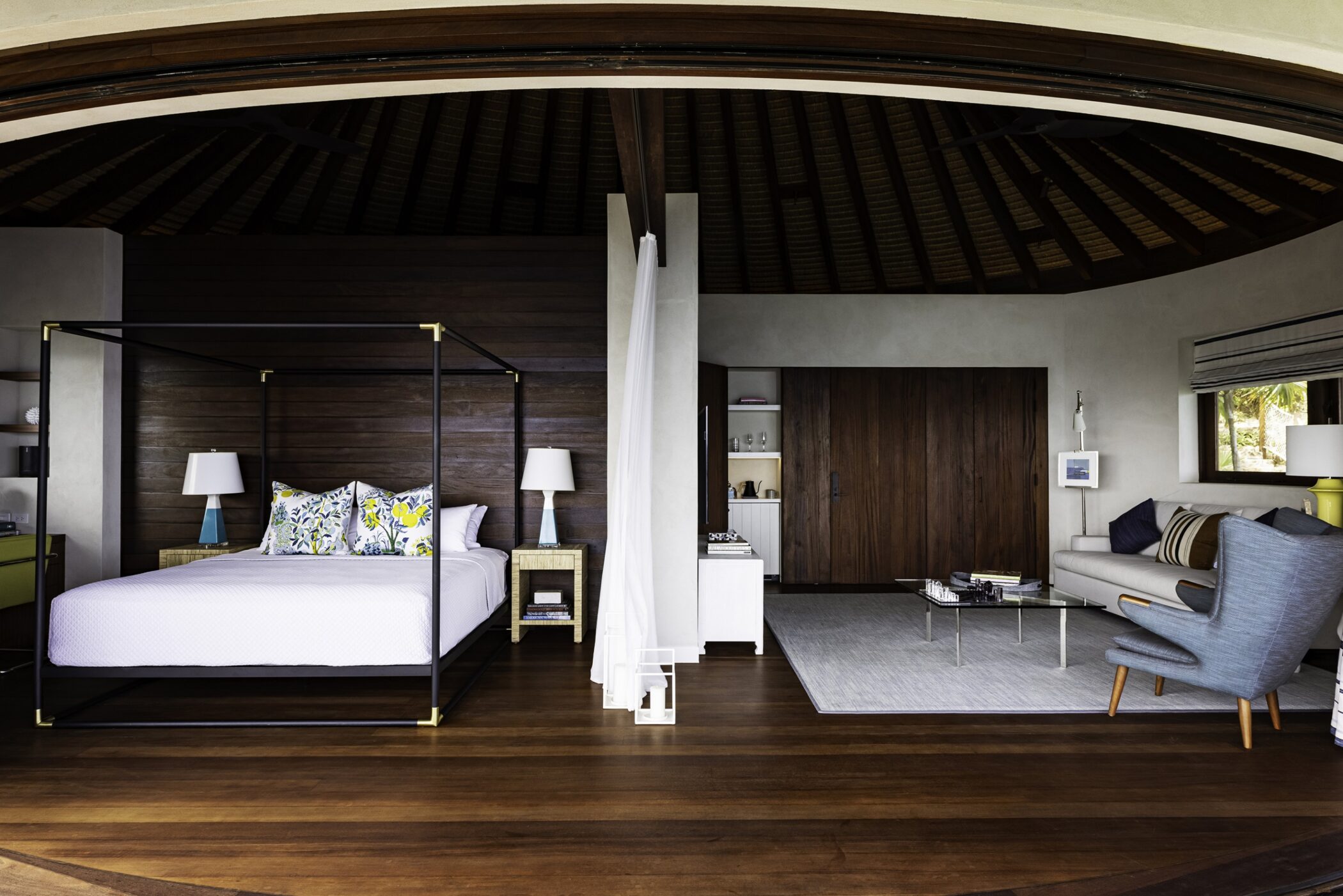 “A decade in the making, the Village Estate takes luxury to new heights, much like its sister estates, with an impressively striking design, state-of-the-art creative amenities and unspoiled panoramic views in the most private of settings.

“Moskito Island knows no limit when it comes to providing incomparable, luxurious moments and adding The Village to our collection further amplifies our position as the leaders of luxury in the Caribbean.”

The two-storey Master Suite at the Village, for example, features a 360-degree wrap-around terrace for “seamless indoor-outdoor living”. 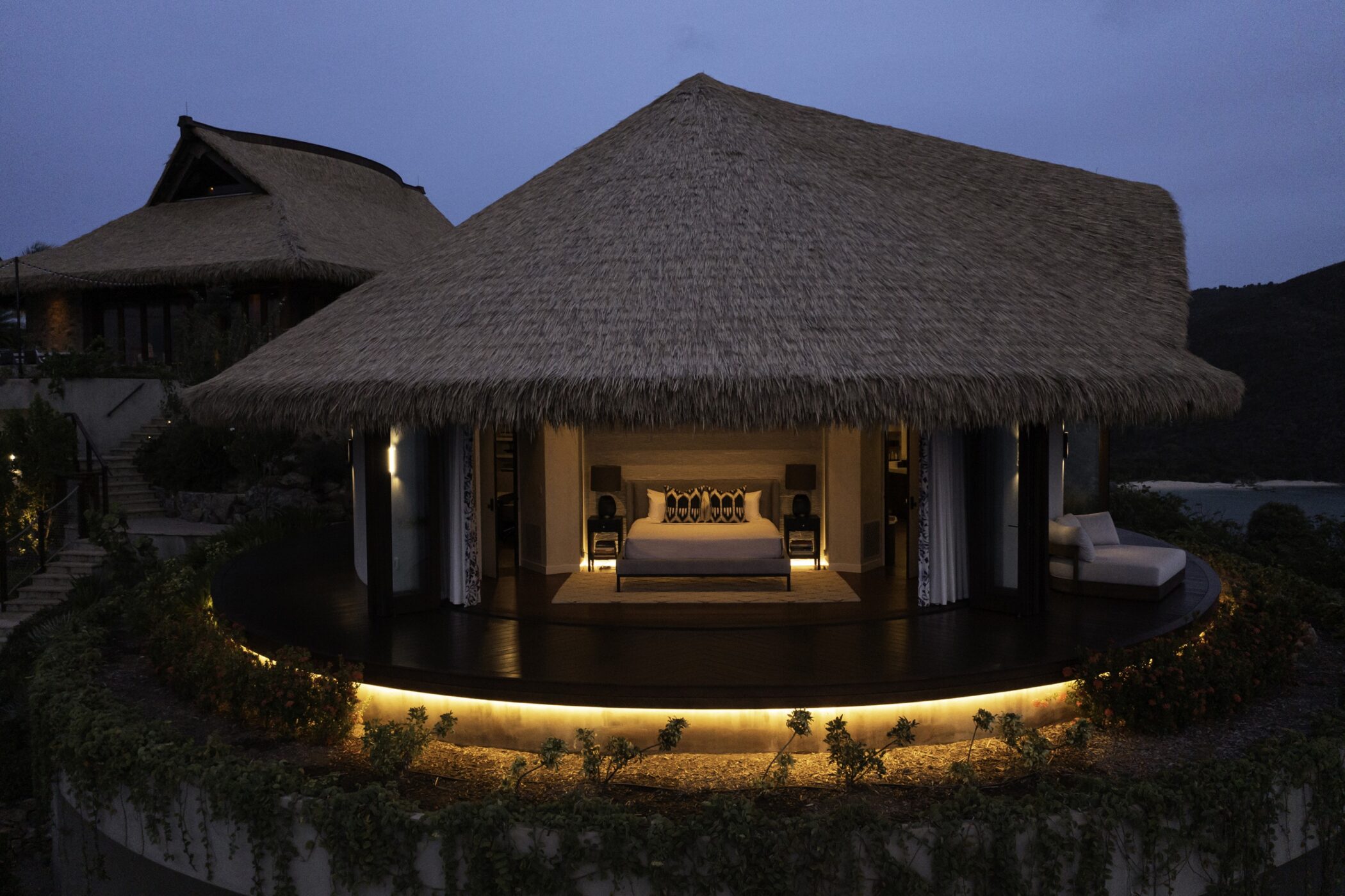 Outside of their own hyper-personalised private estate, guests of Moskito Island have access to world-class communal recreational areas including two tennis courts, watersports centre, gaming, entertaining and movie areas in the communal Beach House, and a fully serviced private beach.

Dining experiences include picnics on Manchioneel Beach and candlelit dinners under the stars. Bespoke spa treatments are offered on request.

Rates for The Village start from $19,000 per night during low-season, for up to 18 guests. This includes a dedicated Estate Manager and team of staff, as well as a team of private chefs across the island.

Moskito Island offers a high-end all-inclusive model where all meals, drinks, non-motorised watersports and curation of a fully personalised itinerary are all part of the rate. Minimum night stays apply throughout the year.