Dubai is not shy when it comes to excess. The glitzy Gulf state has built its reputation on offering bigger and better, a manifesto, which while not to everyone’s taste, has resulted in a million excellent restaurants specialising in every cuisine imaginable. In Dubai, you really can eat the world.

Capitalising on this feast in the Middle East is La Cantine de Faubourg, a French restaurant group that has established itself as the home of the hottest destination dining experiences in the region, with its signature blend of decadence, fabulous food and Parisian je ne sais quoi.

“La Cantine du Faubourg is more than a restaurant, it’s an artistic rendez-vous, a lifestyle statement,” say founders, Pierre Pirajean and Helena Paraboschi, one that started some 20 years ago, on the site of former bank located at n°105 rue du Faubourg Saint-Honoré in Paris. 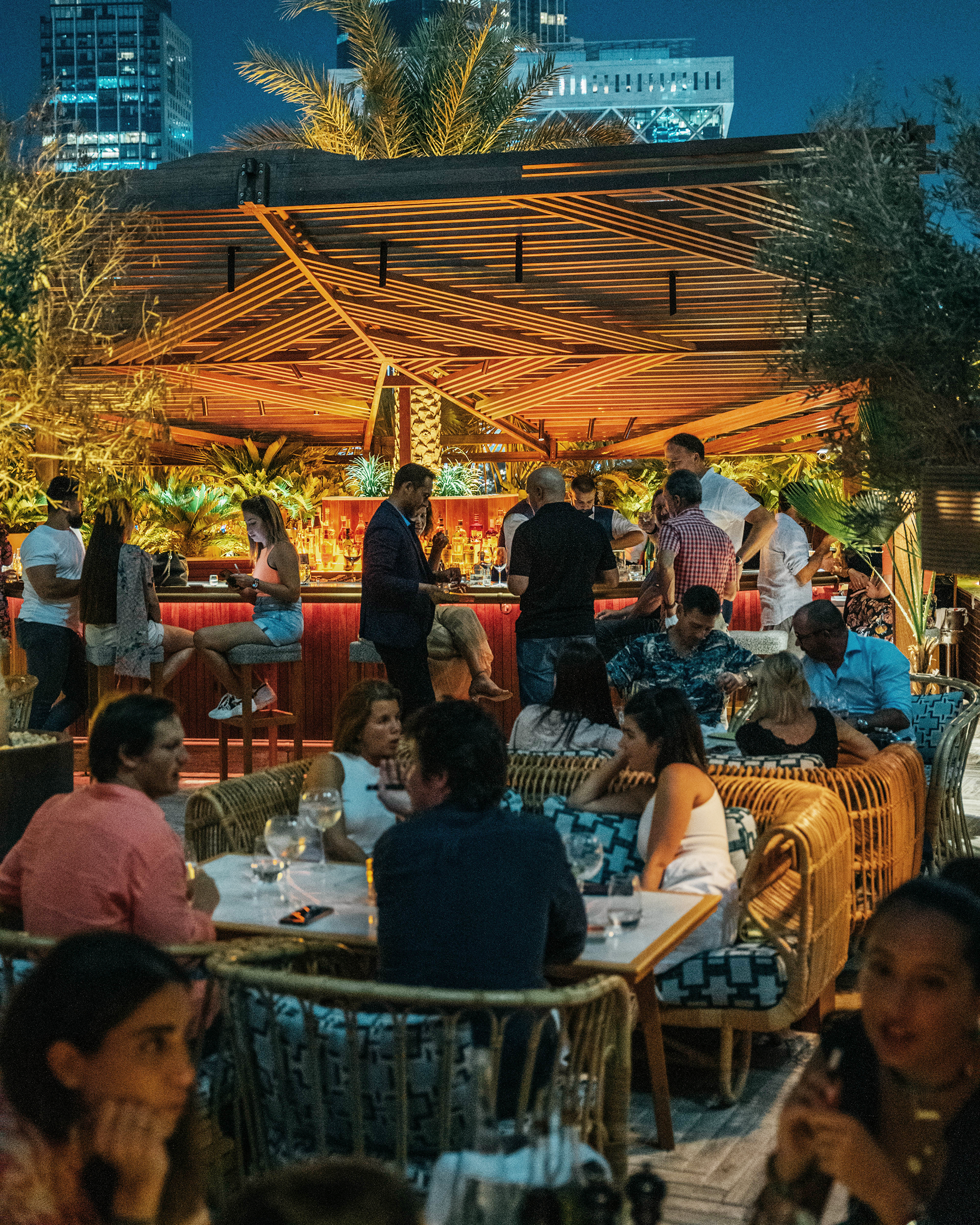 The city went wild for the restaurant’s sexy, high impact vibe and La Cantine, as it is affectionately known, cemented itself as the place to be.

While the Parisian original has long since closed, the team have gone on to roll out Cantine’s winning formula in Dubai. The signature concept relies on five key principles: sound, music, image, art and food, pillars that have seen this group grow to more than six premises, each specialising in a particular international cuisine or mood, in the space of only a couple of years. 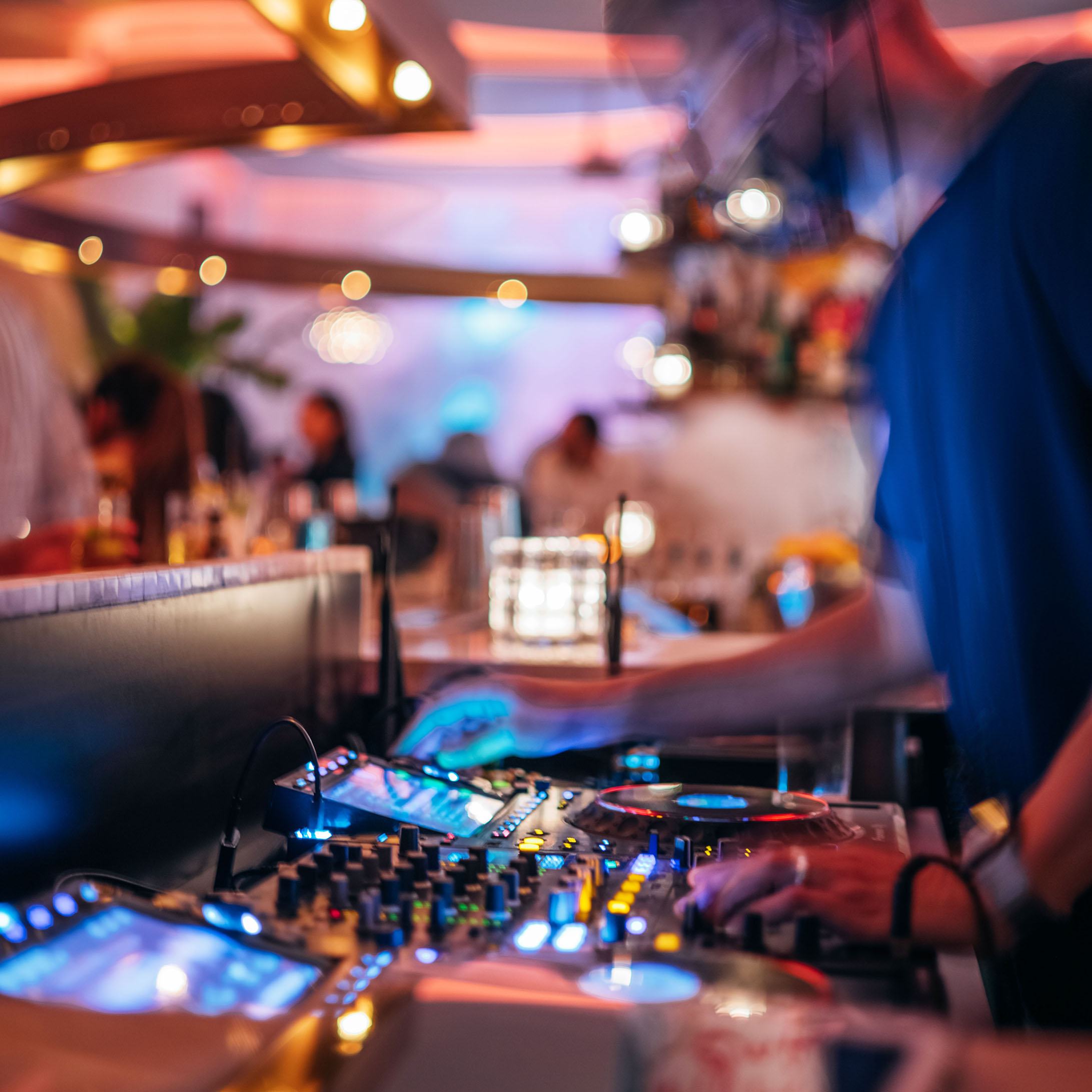 Ninive is located in Jumeirah Emirates Towers, a super swanky high-rise hotel with eyes on the new Museum of the Future. Best described as Cantine’s Arabian counterpart, it’s a captivating restaurant serving the rich, spiced treasures of North Africa and the Middle East complemented by seductive, glamorous service.

Inspired by the Hanging Gardens of Babylon and named after one of the oldest cities of Mesopotamia, the restaurant is an oasis suspended in an urban jungle. If features tented booths around the perimeter and leafy tables in the centre, all covered in exquisite jewel-coloured textile and illuminated by a constellation of lanterns. 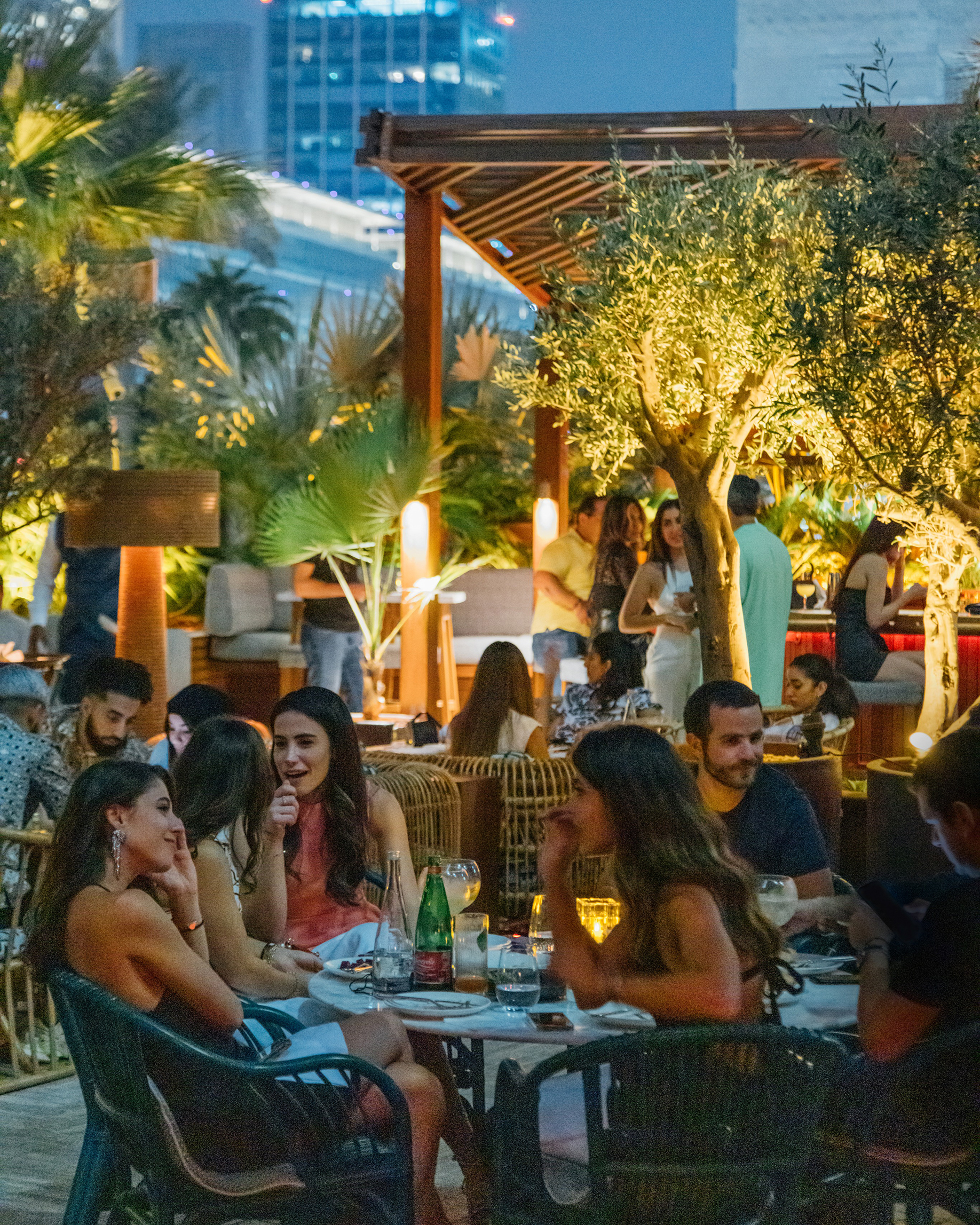 Something of a caravanserai, the enchanted atmosphere gets us in the sharing mood immediately and after a round of bespoke cocktails, we swap stories and fragrant plates that sing tributes to Ninive’s homeland. This is the place for Arabian Nights. The place for Arabian days, however, is Twiggy by La Cantine.

Set on the shores of the Park Hyatt Dubai Lagoon, a shimmering pool on snow-white sands, this is where Dubai’s beautiful people gather to indulge in a spot of 60s-inspired Riviera reverie.

At beach level, stylish hosts glide around a 100-metre infinity pool to the beat of a live DJ, proffering champagne and sushi, meanwhile in the upstairs restaurant, ladies what lunch gossip and gaze over the water, nibbling on a Mediterranean menu. 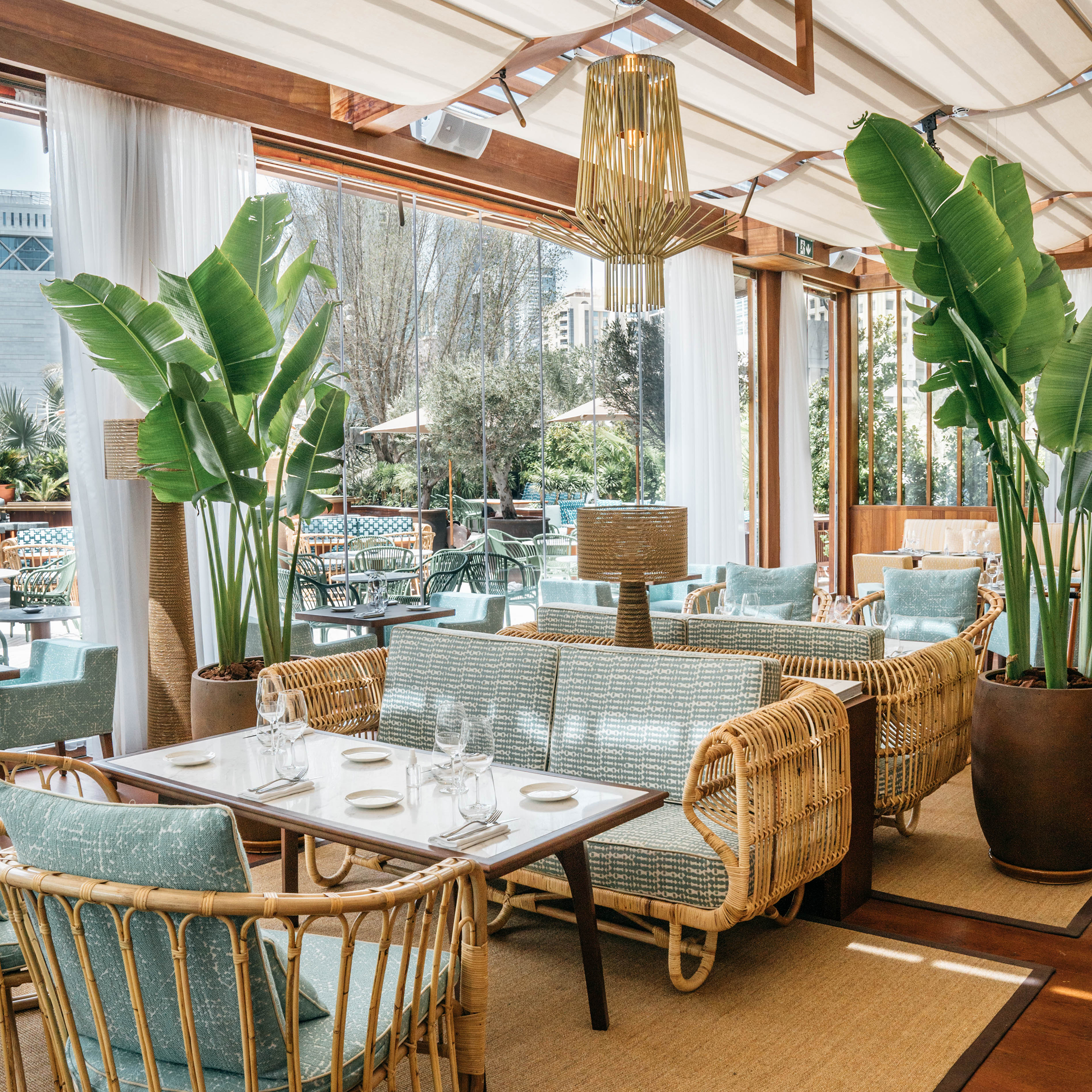 While nods to the 60s feature in bespoke artworks and retro touches, Twiggy remains a contemporary space with a delicious air of insouciance that sets the perfect tone for a day out under the desert sun.

The doppelgänger for the original Cantine du Faubourg is also located in the Jumeirah Emirates Towers. It’s here that the group manifesto of “elegant insanity” is brought to life: from the massive graffiti mural to the refined alfresco terrace dwarfed by a halo of skyscrapers, Cantine has theatre, people watching and louche vibes in spades. 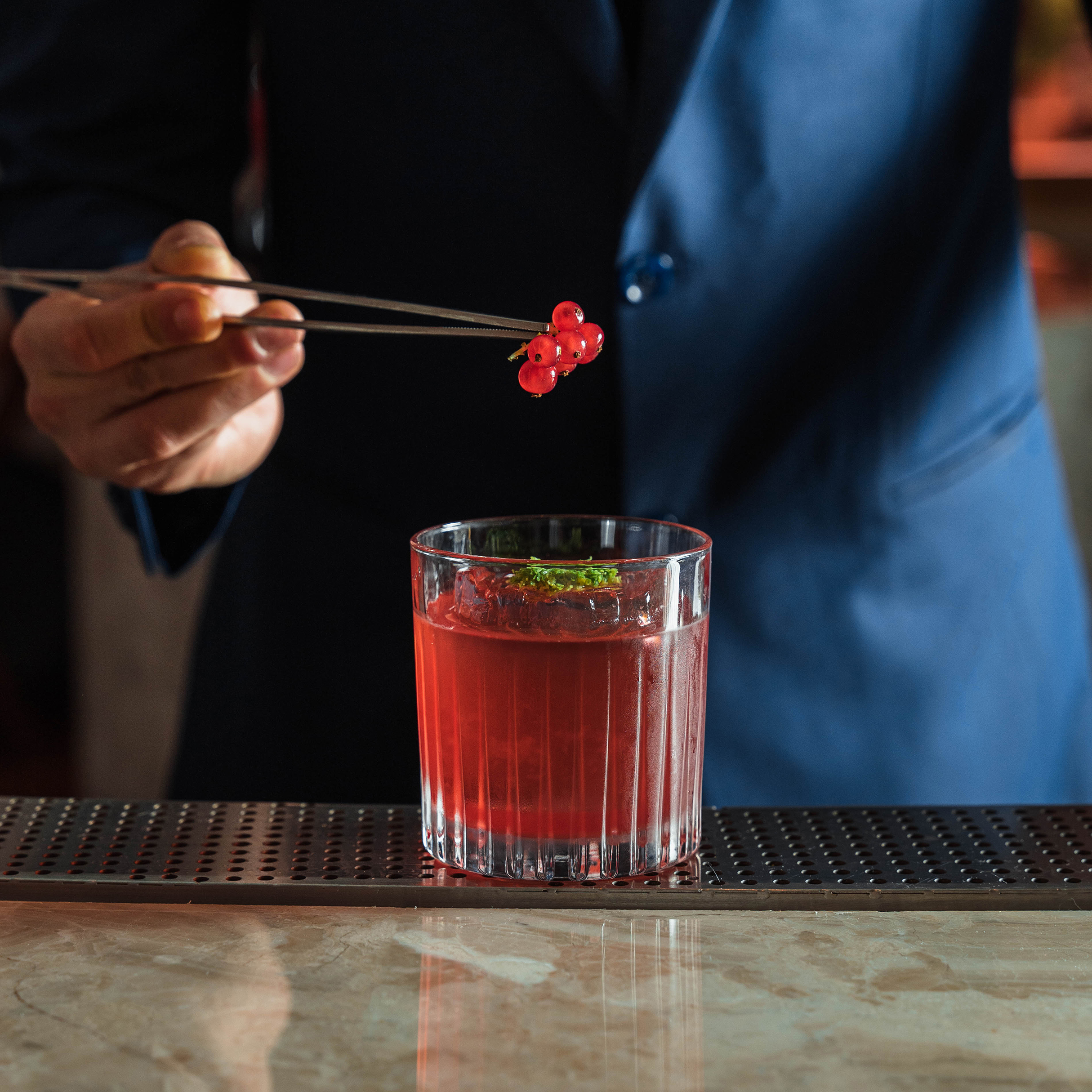 The food is fabulous too, with a menu champions France and some Euro classics thrown in for good measure – think foie gras, burrata, snails, prawn linguine, tournedos Rossini, crème brulée and tarte au citron – all of which is designed to share. This being Dubai, there’s truffle on everything and anything, and lashings of caviar.

Sneak through through an unassuming door between the wine fridges in and you’ll enter Gohan, an intimate Japanese speakeasy-style restaurant and bar decked out in rattan and offering a menu of skewers, sushi and gyoza. 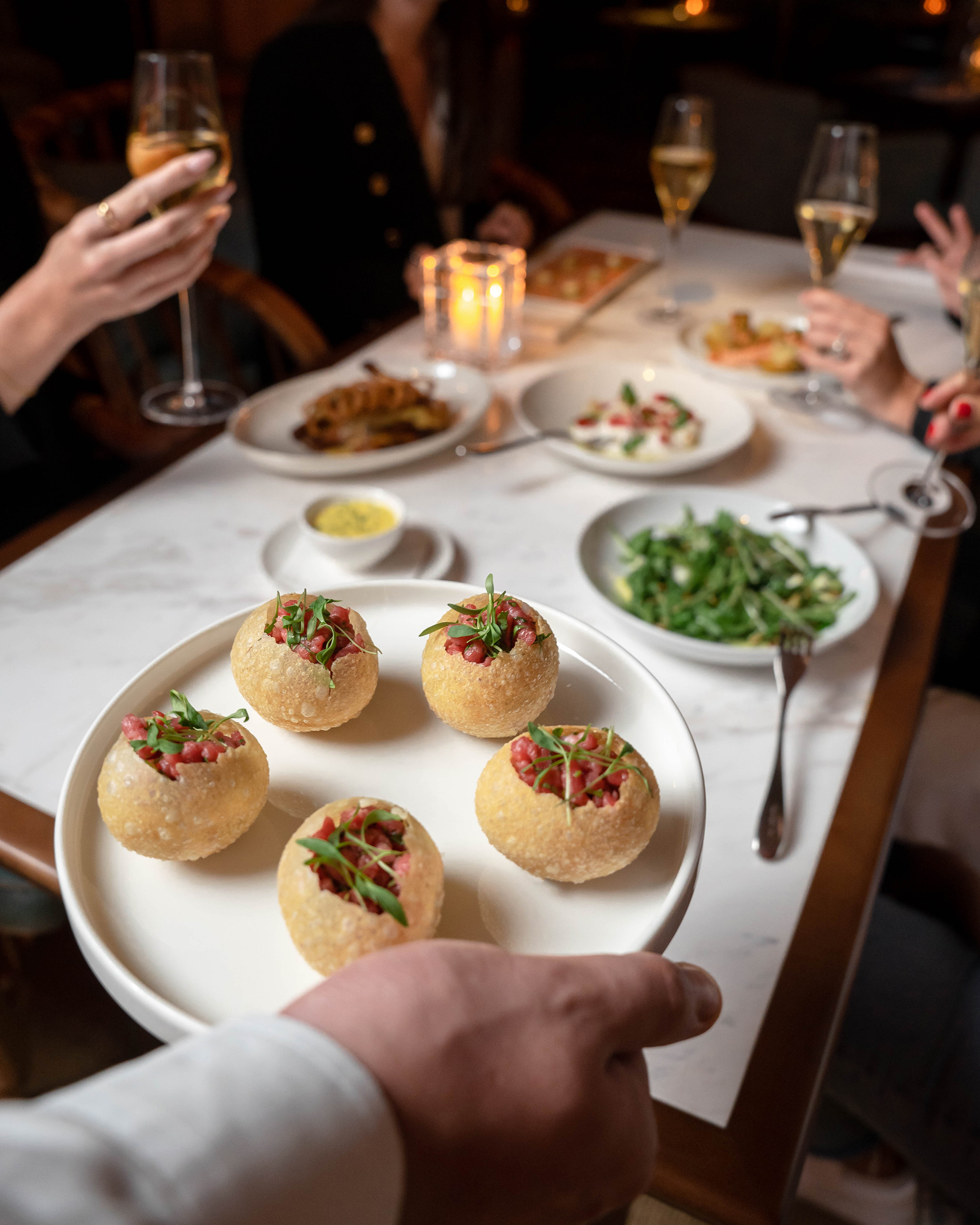 The latest opening from the group, the focus here is more Japanese junk food than refined cuisine; the menu is best suited to soaking up the cocktail list on a date or a boozy catch up with mates. If it’s premium Japanese you’re after, head straight to Mimi Kakushi, one of the group’s latest openings and the hottest Asian ticket in town.

Designed to transport diners to 20s Osaka, Mimi Kakushi blends authentic Japanese cuisine with contemporary accents, in an achingly beautiful dining room full of fringing and lacquer, which has us strutting a little sassier as soon as we enter.

The restaurant serves “far eastern flavours you’ll recognise with western influences” – the latter is how the chefs sneak in the truffle – in a menu where playful twists abound. There’s also plenty to please purists. 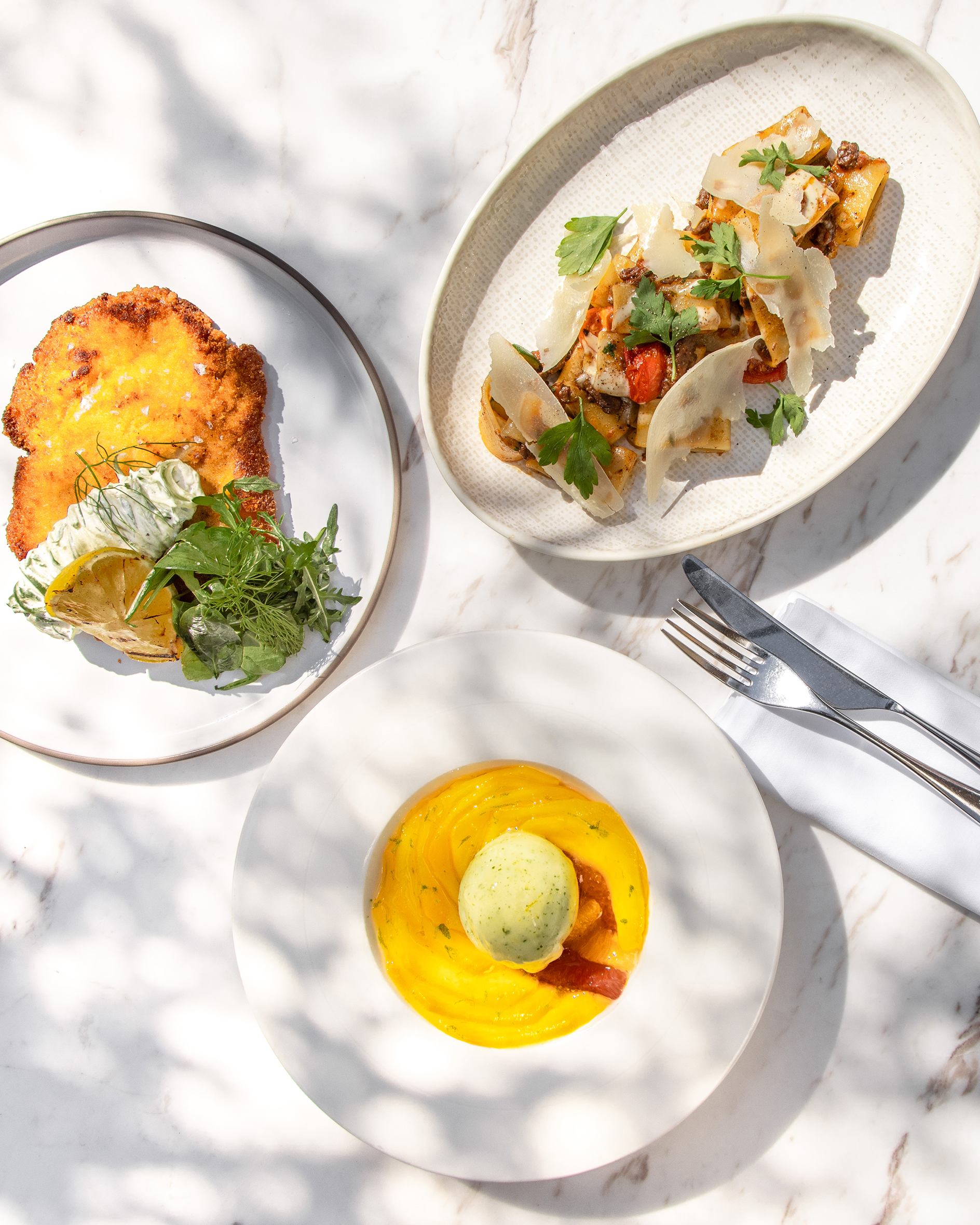 A sushi master officiates over the counter – and it shows. Perfect bites of fish and rice come thick and fast (all the classics are on show), plus buttery sashimi, gyoza and rolls with a million and one ingredients that make us go weak at the knees: prawn tempura with mizuna, truffle yuzu kosho, ume shibazuke & shiro dashi espuma? Yes please.

Further sugary delights are found at Lana Lusa, a homely Portuguese joint in Jumeirah that excels in traditional pastries and cakes. The main dishes are pretty fine too – think generous portions rich with olive oil, herbs and spices. Lana Lusa is booze free as it’s not attached to a hotel, but this as a plus: the zingy juices and mocktails will leave you hangover free and ready to explore the rest of the Cantine du Faubourg group.

But where to stay while you feast? Globetrender was a guest of Rixos The Palm, a family-friendly all-inclusive beach resort situated on the Palm Jumeirah Dubai, just 30 minutes from much of the downtown action. An established property with striking views over the skyline and Arabian Gulf, it was one of the first resorts in Dubai to champion high-end, all-inclusive stays and remains a go-to favourite for generations of visiting guests and locals alike.

While the Turkish-owned resort is vast – 316 rooms, four pools, nine bars and restaurants, two kids’ clubs, a fitness centre and a spa – the welcome is intimate and warm. Turks are internationally renowned for their hospitality and at Rixos, it shows.

Expect further Turkish-inspired delights, such a sublime brunch and a traditional hammam at the award-winning Anjana Spa. The latter makes for a perfect way to unwind after hitting the sights and offers a range of treatments, from facials to mani pedis, scrubs and more.

Globetrender’s recommendation? A Thai massage, from one of the expert Thai therapists. A lesson in the art of cracking knots, stretching muscles and easing tension, this treatment is not to be missed – especially if you’re planning to patrol the pavilions at Expo 2020 Dubai.