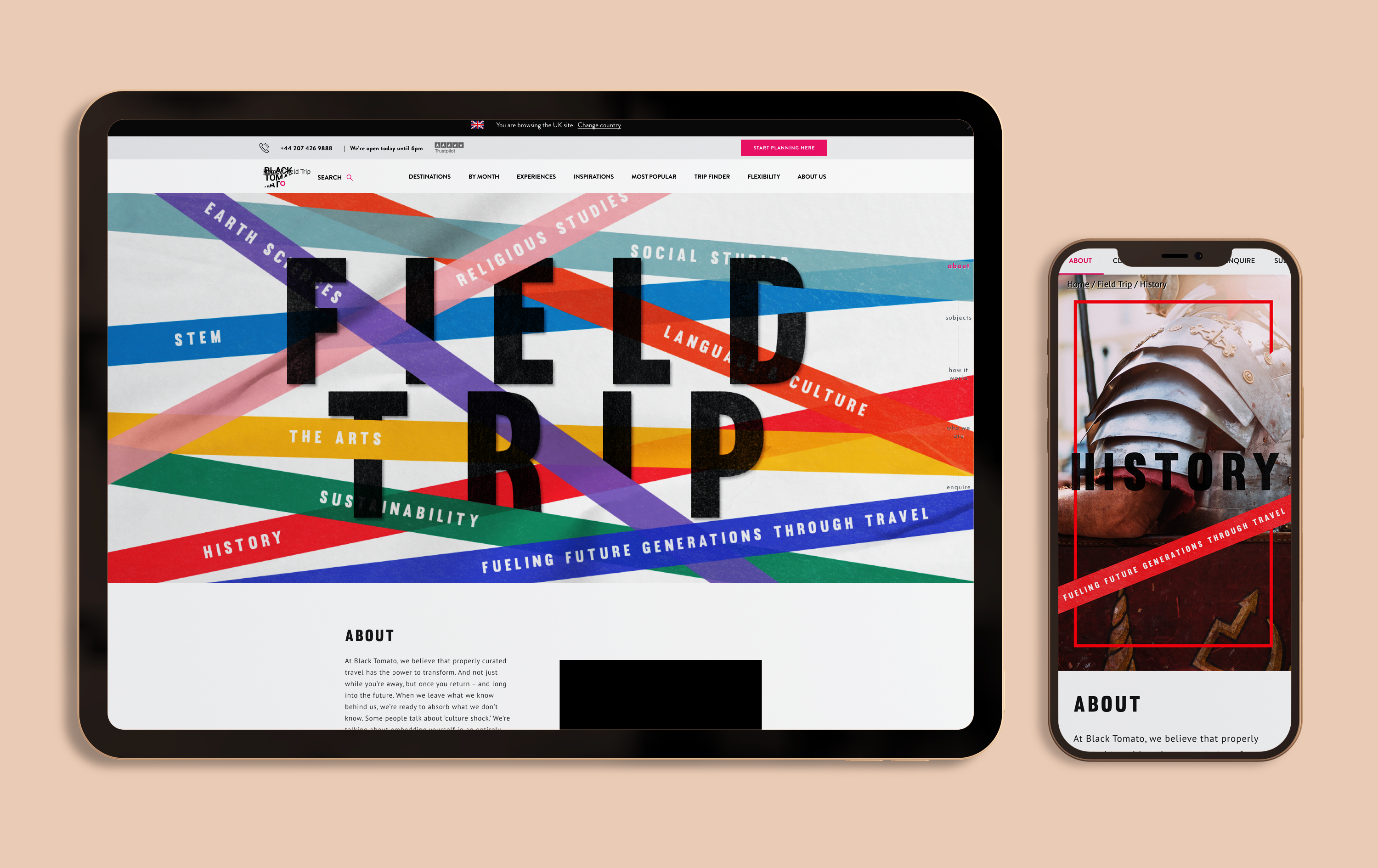 Always ahead of the curve, Black Tomato’s Field Trip is the latest in a series of innovative new concepts – from Take Me on a Story to Bring it Back – to be created by the company.

Aimed at children over the age of 12, this new travel format is designed to enrich the classroom-based education that young people receive with hands-on experiences in the real world.

Black Tomato says that “to truly capture a child’s curiosity and bestow deep and meaningful knowledge, travel has the remarkable ability to both inspire and educate”.

The manifestation of this belief, Field Trip is a “first of its kind” collection of “immersive a la carte classes” around the world, with a focus on developing “purpose driven passion through educative experiential programming, including areas supporting positive social impact, such as sustainability, as well as spurring interest in history and the arts”.

Modules will span social studies – with insightful history experience on women’s narratives in Israel – and the sciences – working with conservationists on critical rhino notching efforts in Kenya, for example. Other lessons encompass everything from archaeology and anthropology to engineering and economics.

Tom Marchant, co-founder of Black Tomato, says: “We’ve seen a significant surge in demand from our substantial family market in both the UK and US, seeking as a top priority to further their older school-aged children’s personal and academic development.

“Field Trip is aimed at meeting their needs; whether to support subject matters for  college and inspire potential future careers, or more simply spark joy from learning and to contextualize core and emerging subjects – but not in a conventional way.

“Far beyond the blackboard, being able to transport children outside of the classroom and away from their screens, to build their skills and interests in situ, has been incredibly gratifying, especially as a father myself.

“It feels like a privilege to know that we can help to shape experiences, expand knowledge and develop dreams for the next generation of entrepreneurs, innovators, leaders, policy makers and activists.

“We believe these trips will not only provide an engaging, experiential platform for education, but also inspire a profound appreciation for travel to be insightful and sustainable.”

Unlike traditional educational trips that last for a couple of weeks, Black Tomato’s Field Trips act as shorter “educational hits”, which can be incorporated ad hoc into existing or newly created itineraries.

Fully bespoke and scalable, experiences can be “dialled-up” or “dialled-down” based on each client’s wishes, ranging from half day to multi-day programming. With easily integrated options for clients and their children to explore their favourite subjects in more depth, or to discover newly introduced disciplines, Black Tomato says its ambition is “to encourage exposure to careers they may be curious about or might not otherwise have considered before”.

Field Trip will build on Black Tomato’s existing suite of transformational experiences, which began with Get Lost, which sees clients dropped in a mystery location, and then most recently groundbreakingly beneficial, Bring it Back.

Comprising eight educational experiences covering eight different disciplines, Field Trip features a total of 64 unique interactions. Some of the highlights are below… 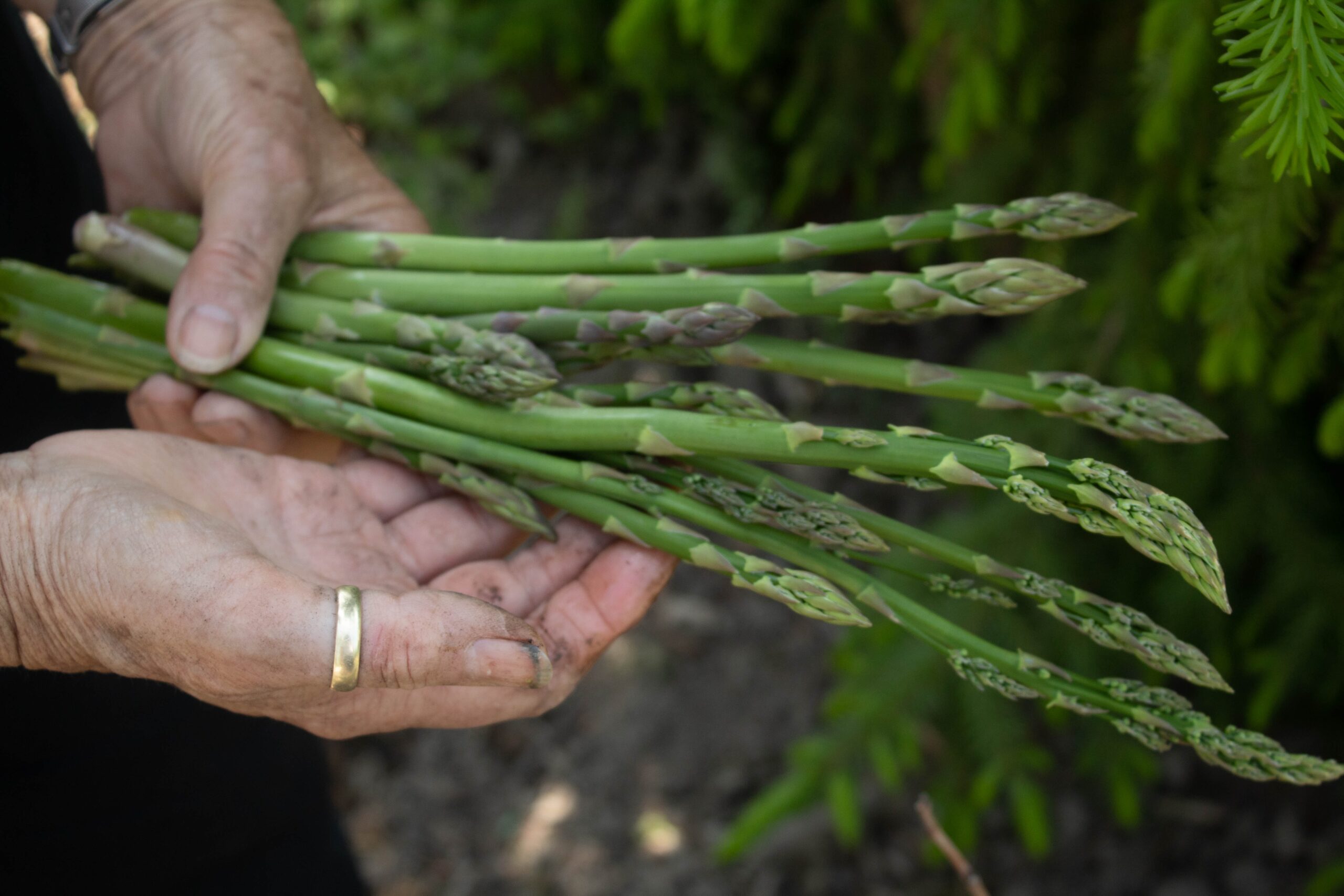 Soren Wiuff, one of Denmark’s most forward-thinking farmers and suppliers for top Michelin restaurants such as Noma, will teach pupils his chemical-free philosophy of modern farming, exploring concepts surrounding sustainability and food waste.

Pupils will learn first-hand what guides his dogma-free “rock and roll” approach to farming that follows nature’s circadian rhythms, and Soren will take guests exploring through fields, harvesting fruit and vegetables along the way, and cooking alongside him using his recipes, featured in The Noma Guide to Fermentation. Pupils will leave with a newfound understanding of the future of sustainable cooking, growing, and conservation. 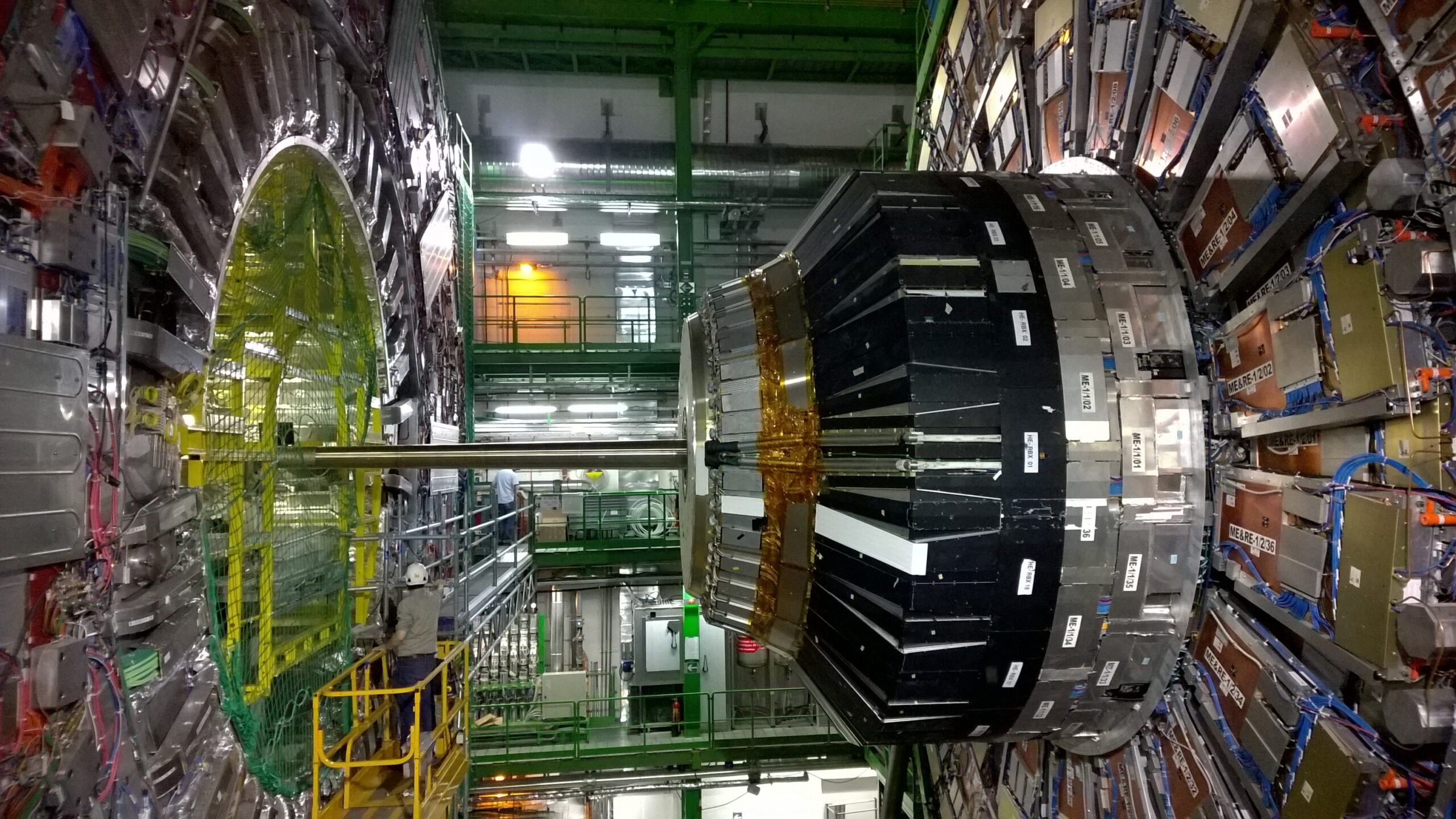 Future physicists and engineers will have unheard of access to CERN, the European Organization for Nuclear Research, that houses the biggest and most powerful particle accelerator in the world. Pupils will take part in an expertly guided immersive audio-visual tour of the site, discovering CERN’s largest experiments, including the monumental Large Hadron Collider, and hear first-hand from the scientists who built and operate the machinery that investigates the behaviour of the smallest particles.

Pupils will leave with rare insight into the vital work of the world’s largest scientific experiment that allows scientists to recreate the conditions that occurred directly after the Big Bang, fuelling passion for the possibilities of contemporary physics and sparking questions in curious minds both young and old. 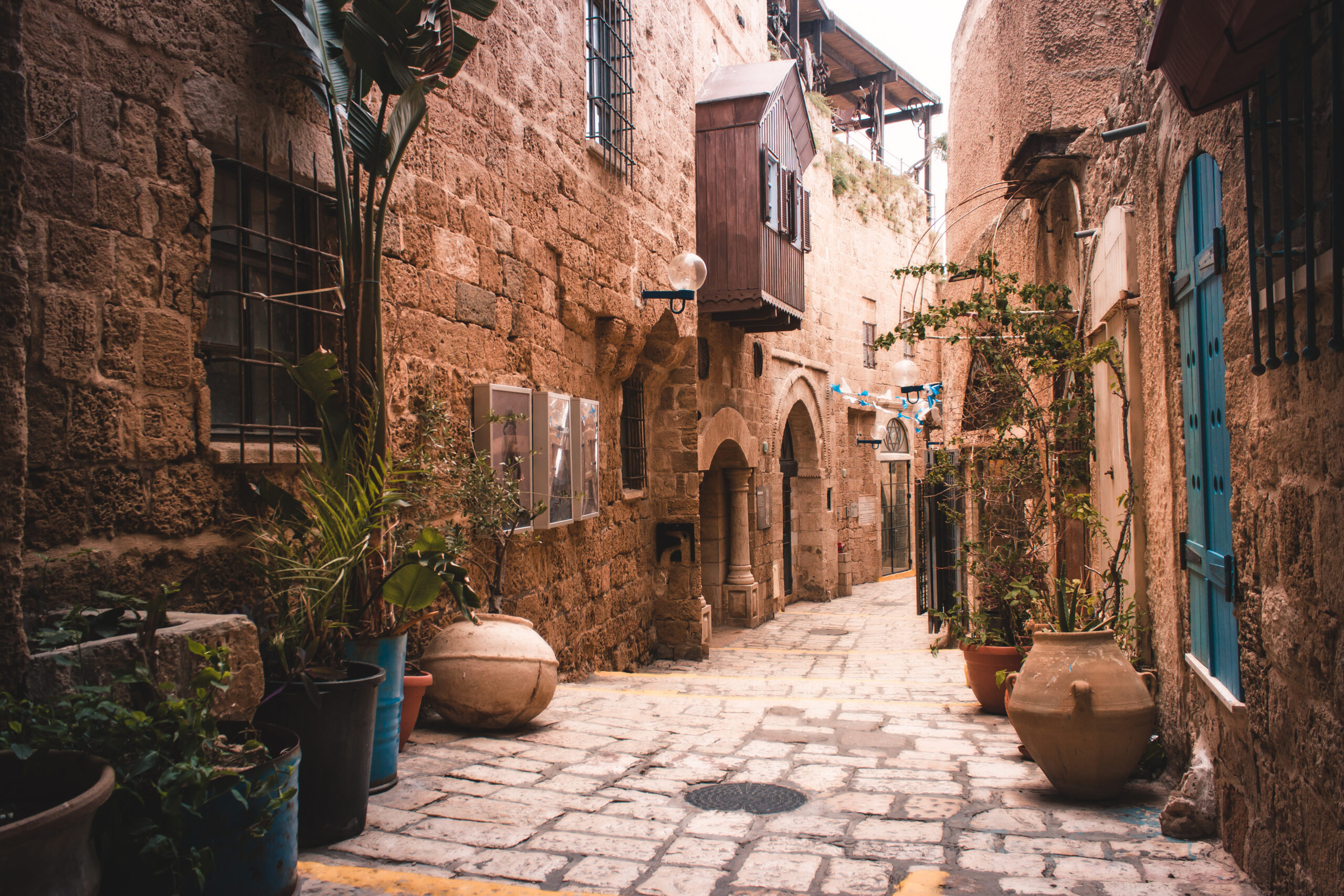 Future social scientists, anthropologists and activists will meet with Doris, an inspiring Christian Arab Israeli woman and outspoken female business owner who defies stereotypes and has helped transform her native Ajami neighbourhood, witnessing it change and flourish through decades of turmoil and rebirth.

During this intimate experience, pupils will share coffee with Doris at home, learning about the social and cultural significance of seemingly ‘everyday’ rituals and discover how for women in Ajami, the simple pouring and drinking of coffee is a deeply cultural act – a ceremony in which social codes and subdued sentiments are expressed and negotiated.

Pupils will learn about Doris’ fascinating life and role as a businesswoman in modern Israel, gain a first-hand, anthropological understanding of the social role of coffee and how everyday rituals and political narratives inform and influence one another.

Doris’ personal journey is the story of an entire society – one of passion, power and politics in one of the most scrutinized regions in the world and pupils will leave with a truly ethnographic understanding of the role of women – and everyday rituals – in modern Israeli society. 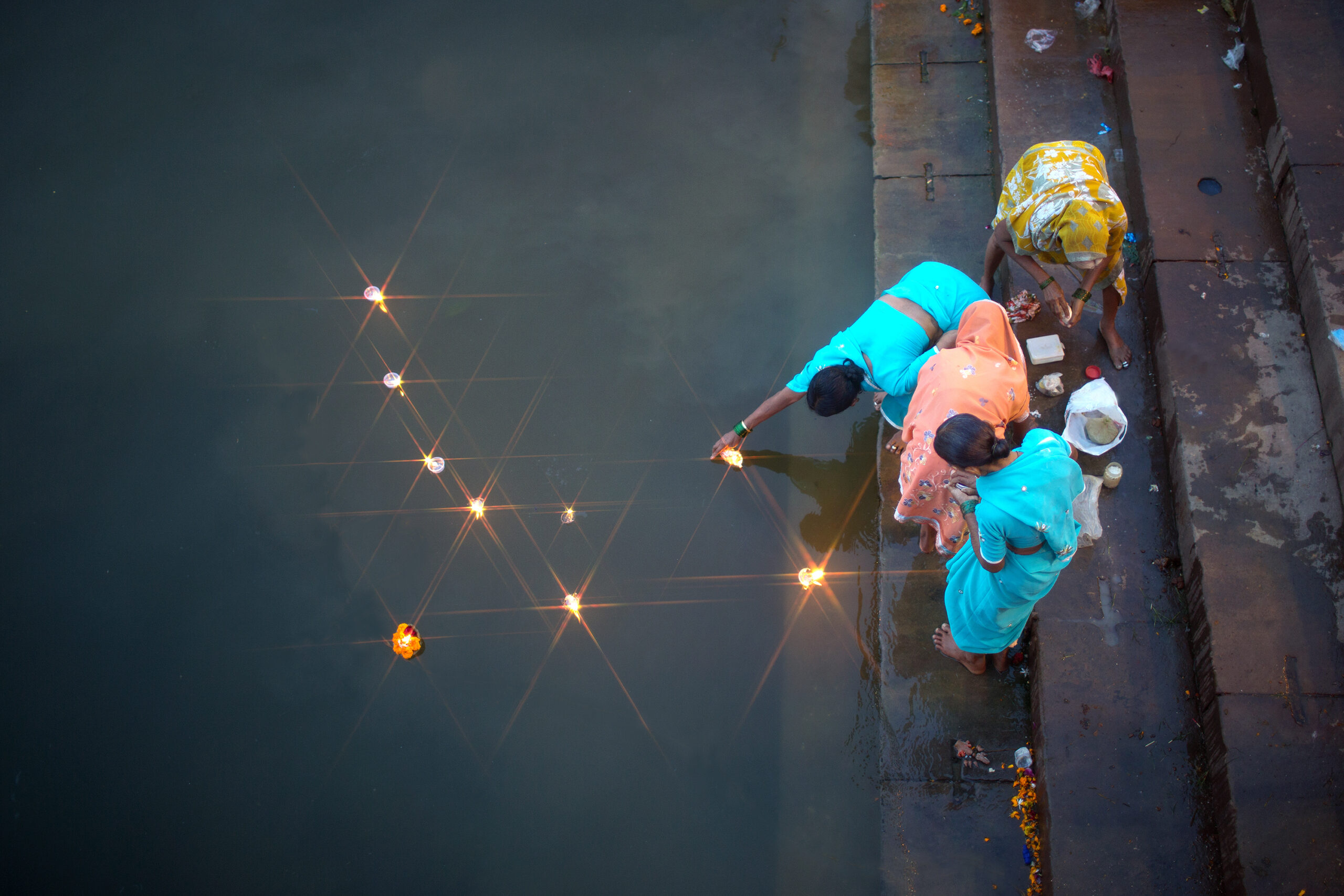 For future theologians, anthropologists and historians, there’s no better canvas to gain a sage-like understanding of the diverse faiths, customs and communities that have shaped Jaipur than by exploring it with a local Vedic Guru (or Hindu priest), a font of wisdom and an expert in astronomy.

Pupils will uncover Jaipur’s most storied sacred sites, observing historic Hindu religious customs in its most iconic temples and even learn the basics, and cultural significance, of palm reading. This powerful opportunity to learn and observe culminates in a private blessing ceremony at a 300-year-old Hindu temple and pupils will leave with a deep understanding of Hindu customs and practices, and knowledge of how places and spaces play a significant role in this historic religion. 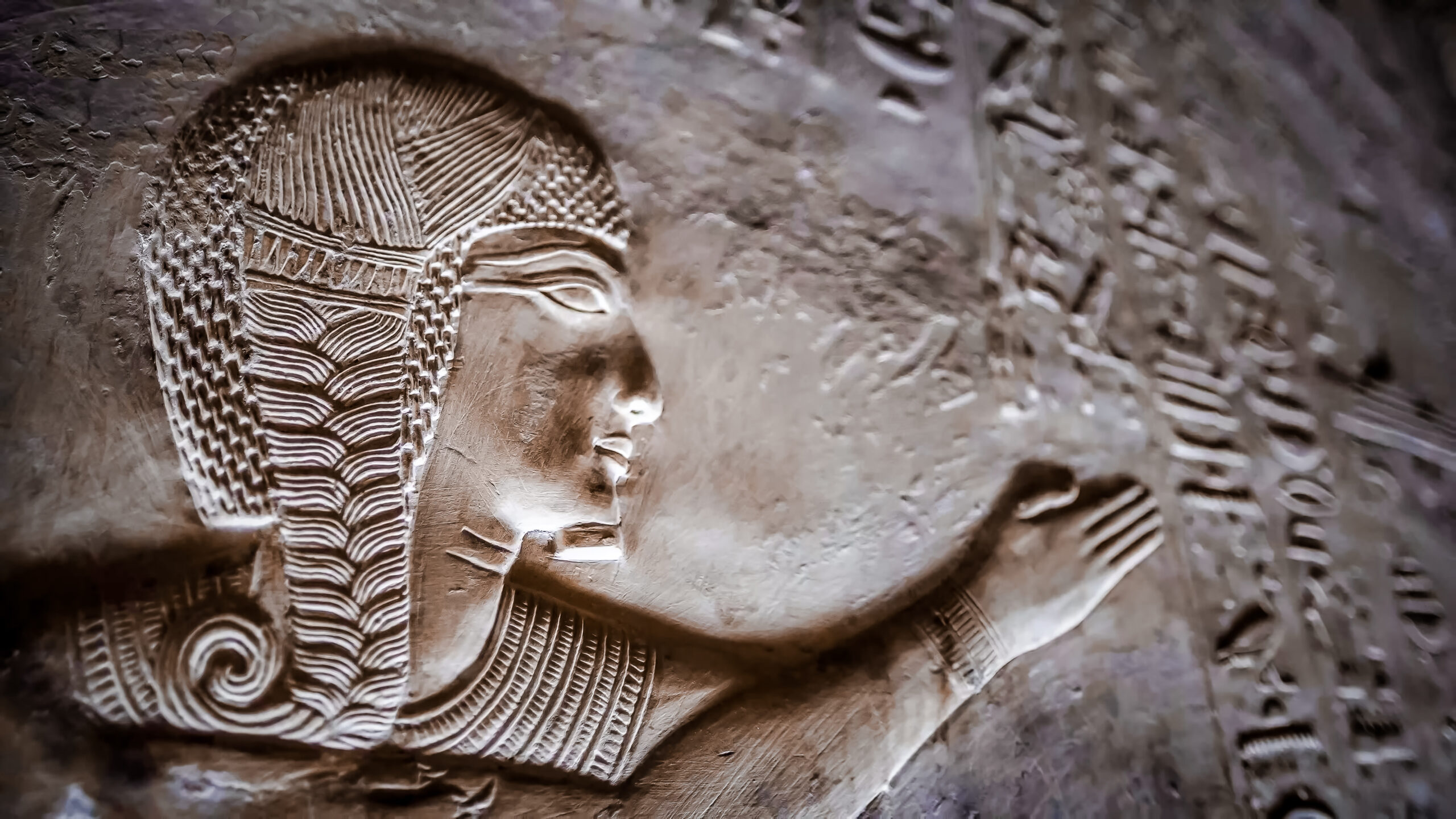 For future historians and archaeologists, pupils will join an exclusive archaeological mission tasked with meticulously excavating the legendary necropolis of Saqqara, Egypt’s “city of the dead” – the sacred burial place of many of its most storied (and most notorious) pharaohs and queens.

On this incomparable expedition into Egypt’s ancient past, this privately guided tour will be led by archaeologists working on site, for the chance to unearth secrets of this vast UNESCO World Heritage Site, learning first-hand about the science and techniques of excavation, including digging, surveying, and recording that serve as the foundation of modern archaeological research.

Pupils will leave with a newfound appreciation for archaeology, preservation and critical thinking – and a passion to further explore the fascinating course of our shared human story and the importance of cultural understanding. 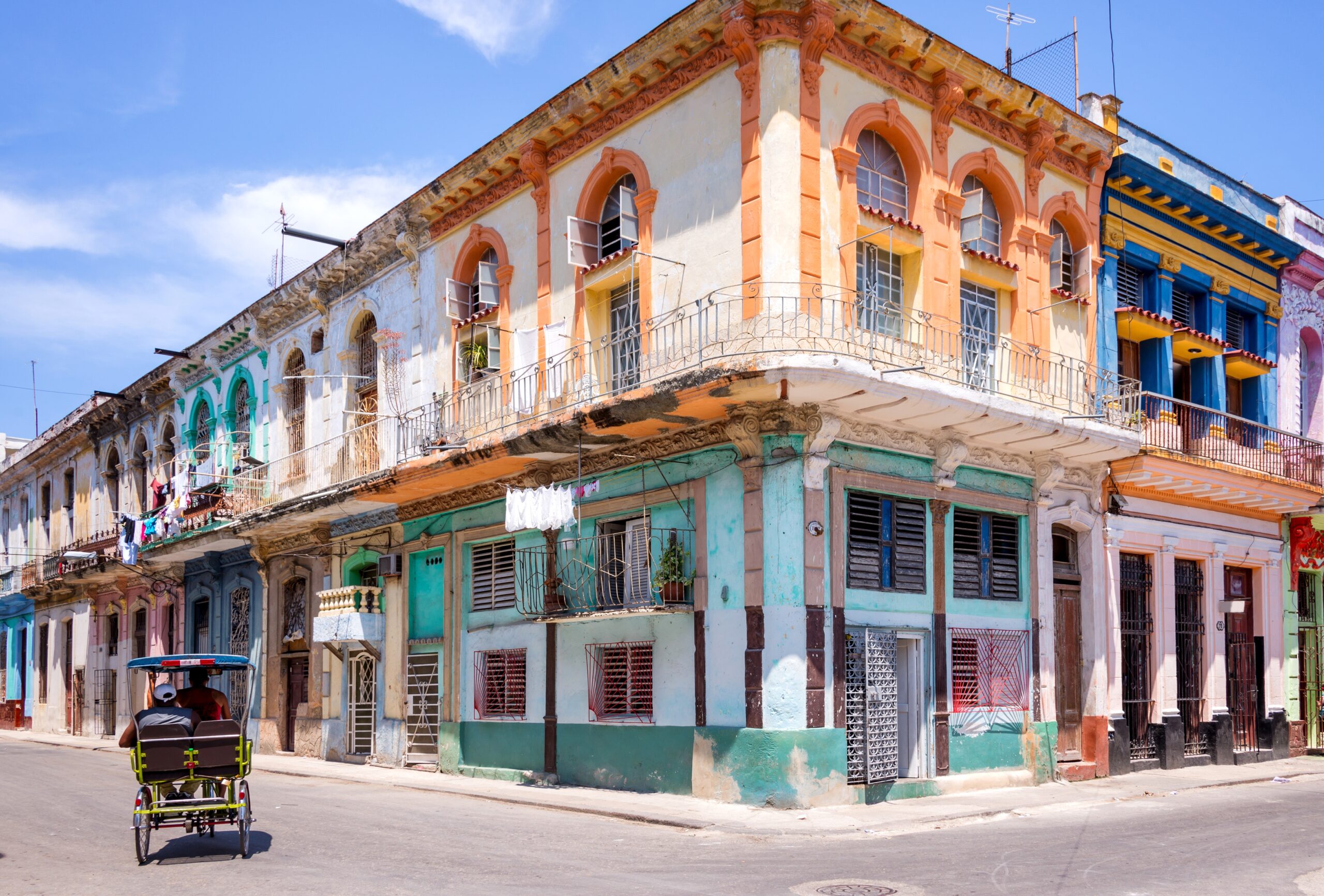 This action-packed, hands-on immersive introduction to the intricate workings of the film industry, all from behind the lens, sees pupils learning specifically about the practices of film and documentary making, equipment and technology, along with myriad industry jobs and roles, from makeup and set dressing to sound producers and focus pullers.

Guests will leave with insider’s knowledge of what it takes to shoot a film or produce a documentary and see first-hand why EICTV students from around the globe choose Cuba to embark on a comprehensive course of study that involves documentary, fiction, sound, TV and new media. 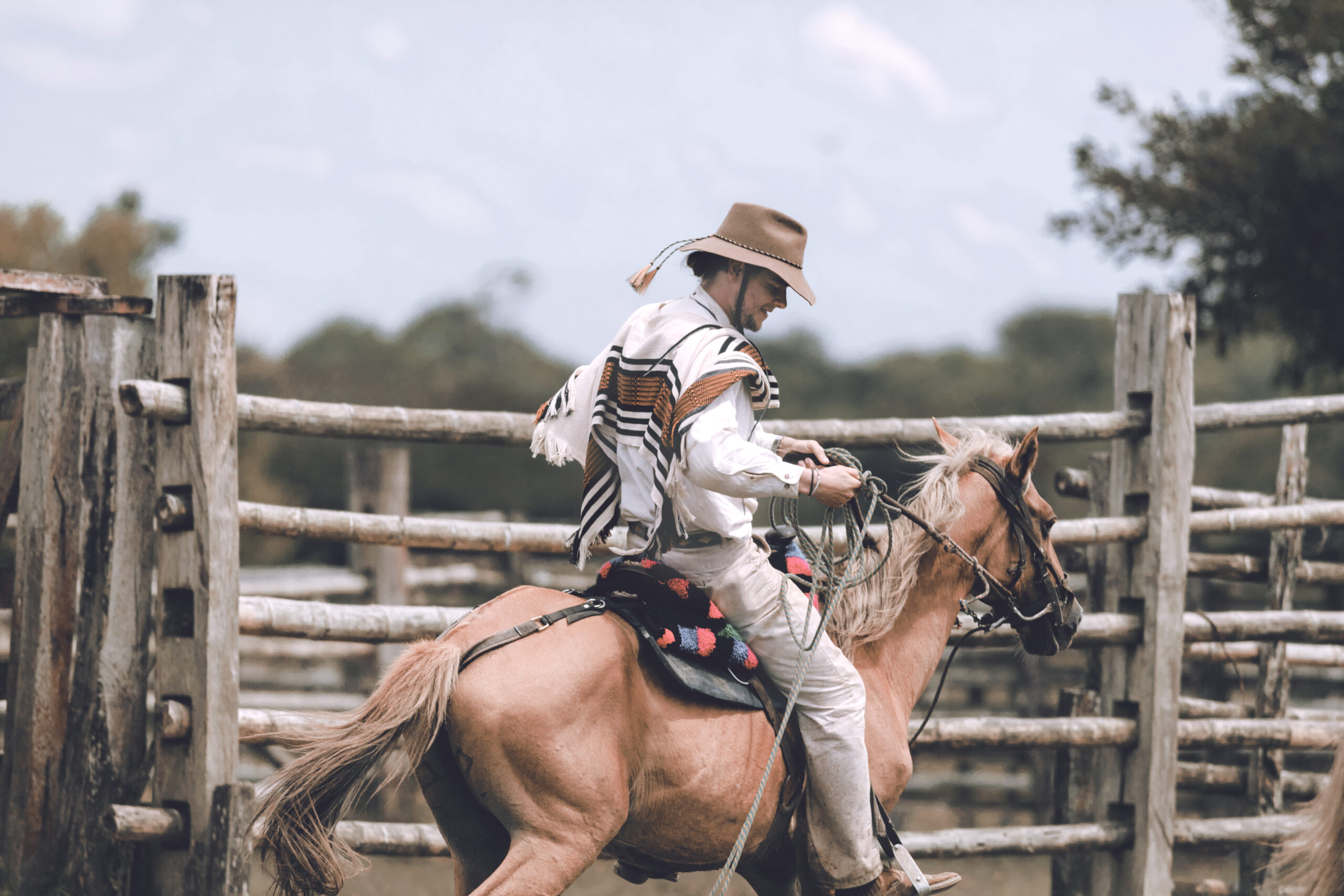 Appealing to future anthropologists (and aspiring cowboys and cowgirls), in the dramatic setting of the remote plains and wetlands of Colombia, guests will learn about the traditional Llanero way of life that has been defiantly preserved across five tumultuous centuries.

In this first-hand cultural interaction, pupils will immerse themselves in the day-to-day life of the Llanero culture, passed down through generations of semi-nomadic Colombian cowboys. From taming horses with haunting, traditional melodies and caring for cattle, to joining in to create joyful joropo music played on the harp and cuatro guitar, pupils will be part of an intimate community gathering, uncovering why oral history is so crucial to not only preserving living cultures but helping protect and amplify them for generations to come. 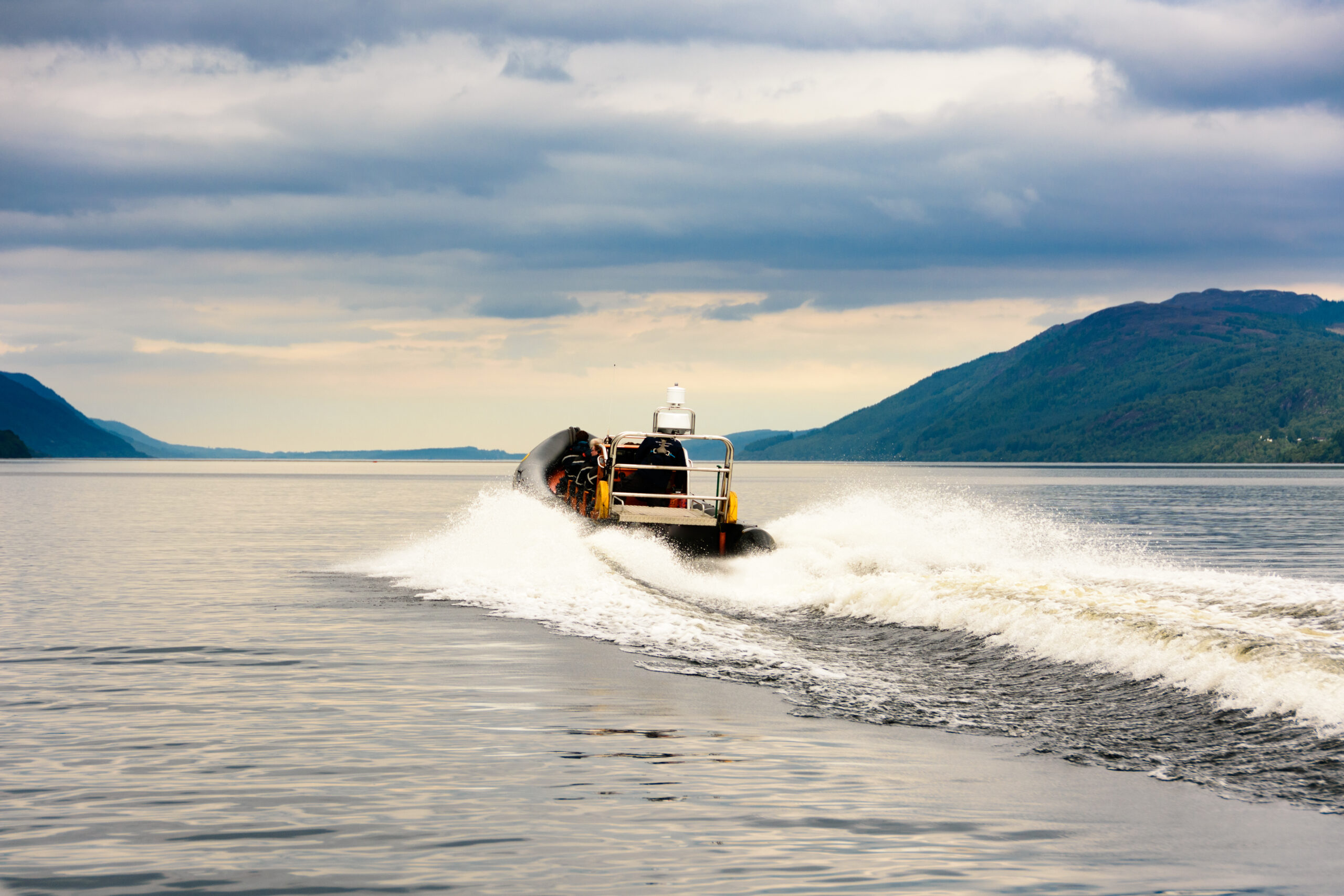 Well-suited to future scientists, geologists and explorers, this immersion into the world’s most talked-about lake will have pupils join legendary naturalist and researcher Adrian Shine who, in 1987, organized Operation Deepscan – a sonar sweep of Loch Ness aiming to resolve the folklore of this mythical body of water.

The event, a media spectacle, put to bed the persistent legend that a monster lay beneath the lake’s apparently placid surface. But so many more mysteries remain to be solved, especially understanding the water dynamics and diversity of one of the world’s deepest lakes and lochs.

On this myth-busting experience, pupils will join Adrian on a private boat cruise, probing beneath the surface and unlocking its scientific secrets, getting to grips with the methods and methodologies used for modern research that help untangle its mysteries. Pupils will Leave with an expert’s understanding of the world’s deepest lakes and how we study them, as well as how we pierce their myths.