Moon World Resorts is planning to build a series of mega hotels that sit under giant replicas of the moon and feature ‘active lunar colonies’. Jack Southan reports

Commercial space travel may seem closer than ever, with the likes of SpaceX, Blue Origin and Virgin Galactic pioneering the way to affordable space tourism, but unfortunately for most of us it’s a long way from being a viable holiday idea.

But the next best thing may be on the way. Not one, not two, but four multibillion-dollar ventures are planned around the globe to bring the excitement and adventure of space travel to planet Earth.

Moon-themed mega resorts may seem far-fetched but there’s obviously a demand as four such projects are planned to open in the coming decade.

Conceptualised by Canadian architectural design and intellectual property licensor Moon World Resorts Inc, each lunar resort is expected to cost more than US$5 billion, however, the price of entry for consumers will be rather more affordable than the going rate of an actual space tourism flight, which is about US$450,000.

“People want something unique, something different, something ‘Wow’,'” Michael Henderson, co-founder of Moon World Resorts, Inc, tells The New York Post. “With Moon [World Resorts], for US$500, they can walk on an authentic lunar surface and enjoy exploring a lunar colony in a spectacular way.”

First up, could be Moon Resorts Las Vegas, which could take the form of a 510,000 sqm hotel whose signature feature will be a gigantic replica of the moon standing on top of it. Other features would include 4,000 guest rooms, a vast spa, shops, numerous restaurants and bars, and an inter-galactic nightclub where dancers can cavort beneath a flying saucer.

However, as with other Moon resorts, the main attraction would be a ten-acre “Active Lunar Colony” situated in the upper half of the lunar structure. The attraction is said to mirror the design of the actual lunar colonies under active planning by NASA and for US$500 will take customers on a 90-minute tour like no other.

Guests will ride in moon buggies across craters and through a version of a lunar colony as it would really look. Even the entrance will be accessed by a “moon shuttle” that circles the exterior of the hotel like a rollercoaster.

Moon resorts will also incorporate boutique “Sky Villas”, known as “the Private Residence at Moon”. These luxury units will be housed internally within the main superstructure disc buildings. Approximately 300 units will be available for purchase. Sky Villa owners will also be members of the exclusive private members club at Moon.

Confusingly, Las Vegas will next year see the debut of a similar project – the MSG Sphere at the Venetian entertainment venue, which will be the largest spherical structure on Earth and come complete with a “fully brandable” LED exterior. But the two projects are not the same.

Henderson told Globetrender: “Moon will welcome 10 million-plus annual guests, 2.5 million of whom will be able to visit Moon’s signature attraction.”

He added: “Unlike past and present artistic renderings and NFT type creations, Moon is actually logical. From an architectural, engineering and design perspective, Moon can be built. Additionally the business case for Moon is extremely compelling, the brand is already known and loved by 7.5 billion humans. Indeed moon is the most recognised brand on planet Earth and is fortunate to enjoy the largest billboard ever created.”

The plan is for Moon World resorts to licence four Moon Destination Resorts around the globe – in North America, Europe, the Middle East or North Africa (MENA), and Asia. (For the MENA region, the UAE, Bahrain, Qatar and the Kingdom of Saudi Arabia are all contendors). 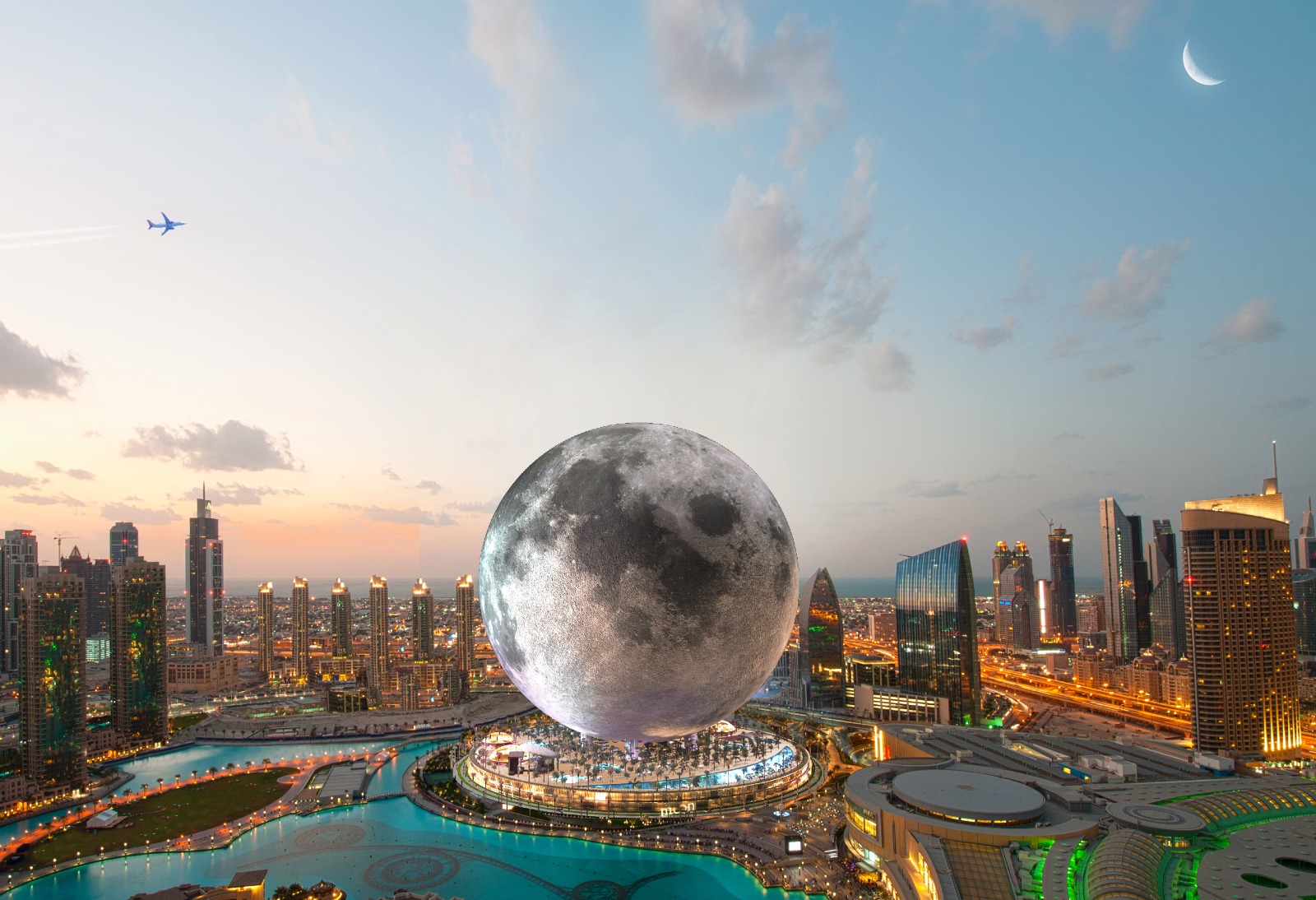 A spokesperson from Moon World Resorts told Globetrender: “For many compelling reasons, the UAE would be logical with perhaps Dubai being the front runner; however, it appears Dubai’s current focus is entirely based on residential real estate projects rather than truly innovative and spectacular tourism growth type projects.

“There is nothing innovative in building a square box and filling it with a USA based children’s franchise models, that much duplicated product is everywhere. Waterparks and theme parks are regurgitations the world over – in MWR’s humble opinion, one must ‘dare to be different'”.

The spokesperson added “Potential regional licensees for Moon will be major global forward-thinking corporations capable of funding a US$5 billion build-out and, moreover, operating Moon to the highest standards.”

Regional licensees may choose to have Moon developed as a stand-alone destination resort or as a central focal point surrounded by a mixed use community; similar to the relationship between the Burj Khalifa and Downtown Dubai, explains Henderson.