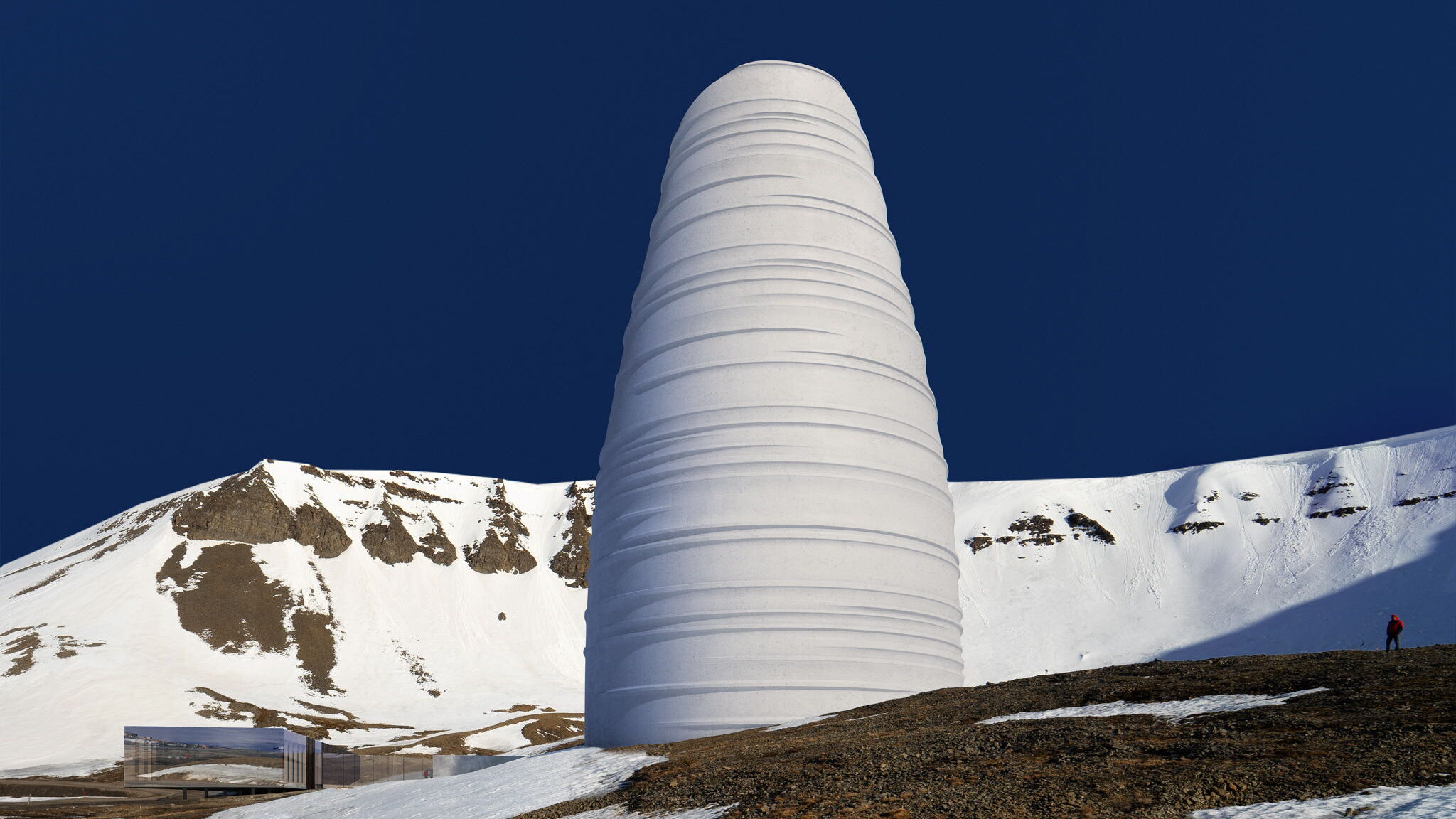 A visionary tourist attraction above the Arctic Circle, the Arc will preserve both global biodiversity and our collective digital heritage. Rose Dykins reports

Scandinavian design firm Snøhetta has created a concept called the Arc, a pioneering visitor centre designed to preserve both the planet’s crops and its digital heritage while welcoming guests at Arctic temperatures.

Situated in Longeryearbyen, Svalbard – a Norwegian archipelago between mainland Norway and the North Pole – the Arc is named both after its Arctic location and its function as an archive.

Commissioned by Arctic Memory AS, the visitor centre will also exhibit content from both the Svalbard Global Seed Vault – which stores backups of more than a million crop samples from all over the globe – and the Arctic World Archive – which preserve the world’s digital heritage with its vault of “valuable digital artefacts and irreplaceable information from around the world”. 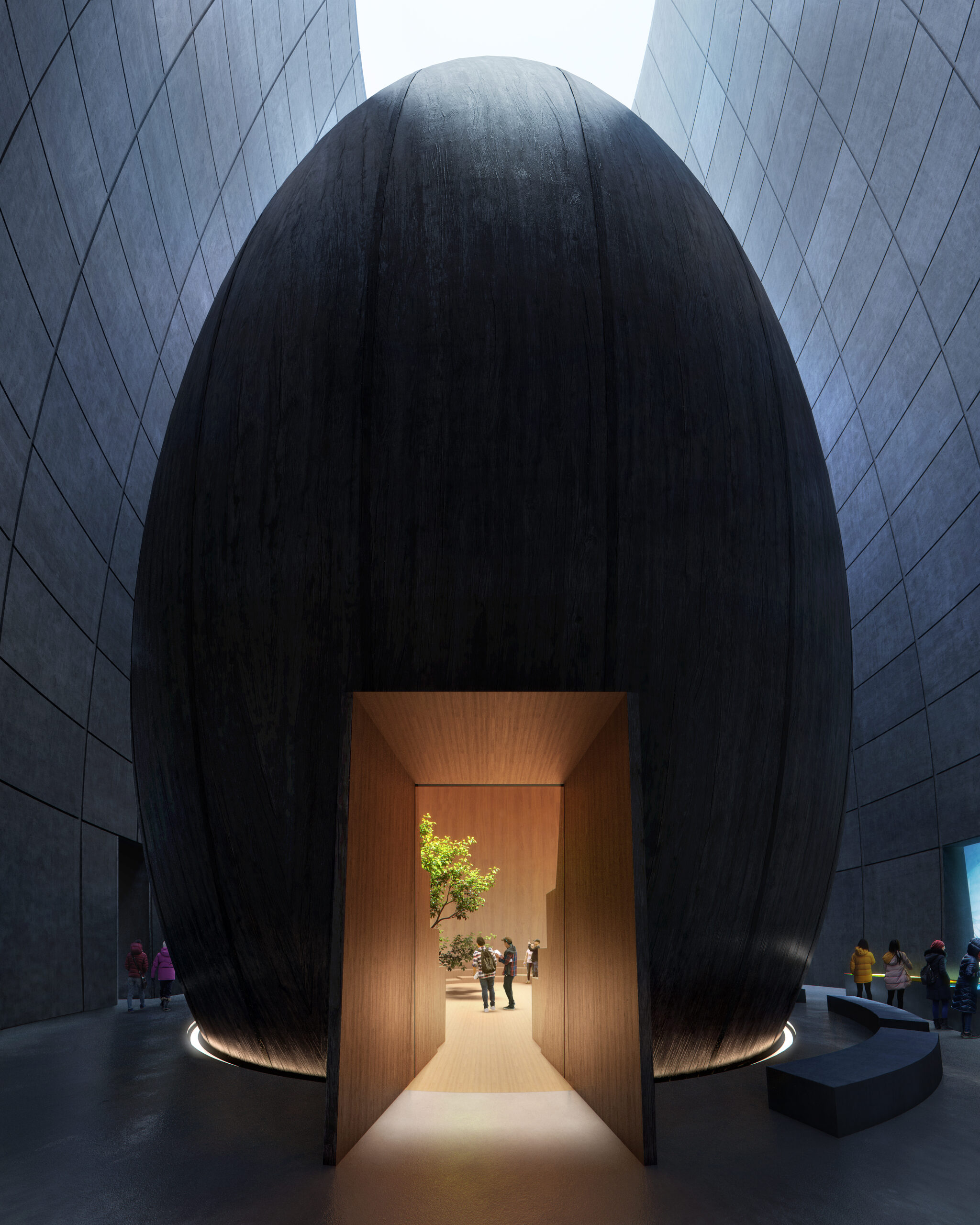 The consistently freezing local climate is optimal for both the storage of crop genetic material and digital data.

The Svalbard Global Seed Vault was created to “safeguard as much of the world’s unique crop genetic material as possible”, to mitigate the impact of natural or man-made disaster on the planet’s biodiversity. 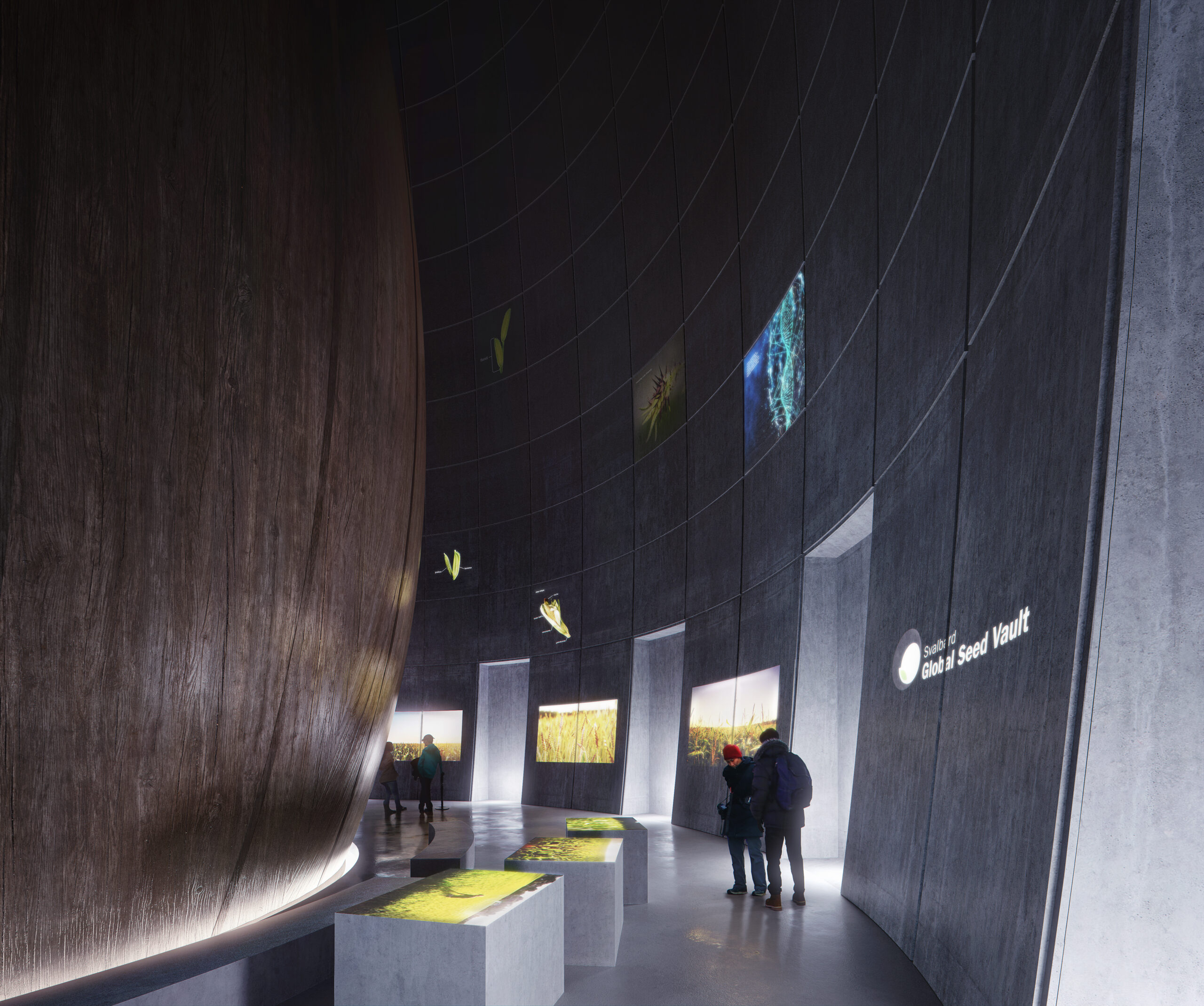 The Arctic World Archive – which hold artefacts such as manuscripts from the Vatican’s library – says: “Much of our heritage is stored digitally and, despite best efforts to protect it for the future, it can be exposed to risks, either from the online environment or just from the limits of modern storage technology.

“Designed to withstand natural and manmade disasters, in the safest location on earth, data stored here will last for centuries.”

The Arc will also teach audiences about the distinctive geology of the Svalbard Archipelago, and how it has transformed over millions of years. 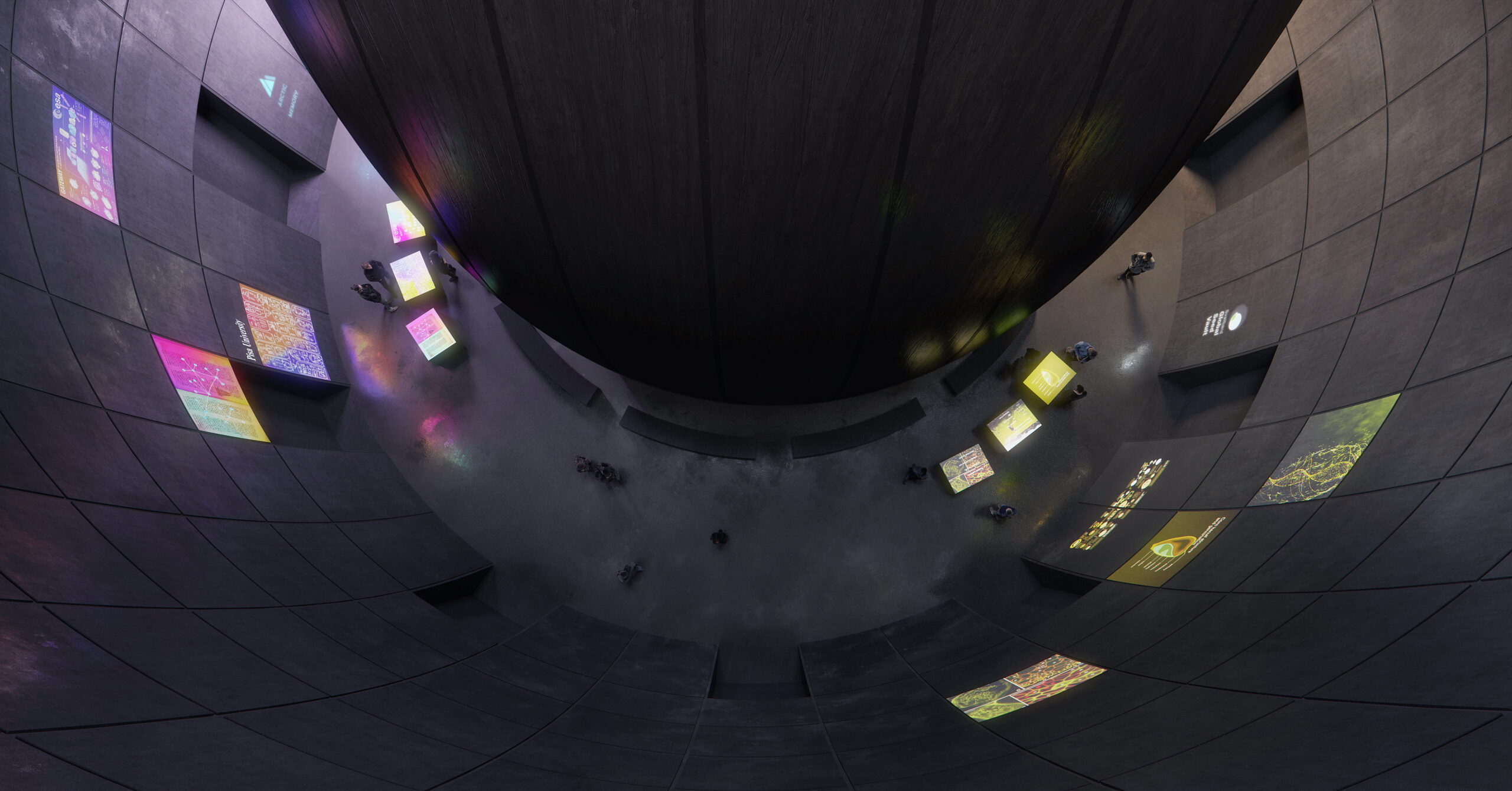 The Arc is divided into two structures – the entrance building and the exhibition building. The idea is for the visitor experience to emphasise the transition of crossing over from a familiar space to the unique environment of a vault cocooned within the “permafrost of Svalbard”, where the archives are stored.

The entrance building will have facilities to cater for visitors, including the lobby, ticket office, cloakroom and a cafe, as well as technical equipment and work rooms for the Arctic World Archive.

This part of the Arc is suspended off the ground to prevent heat-loss to the severe conditions outside. Its interiors of exposed wood and dark glass panels are warm and inviting, and the building’s roof harvests energy via solar panels.

Snøhetta has deliberately contrasted the designs of the visitor centre and the exhibition space. The idea is for the former to appear “rational and stoic”.

Meanwhile, the exhibition building is designed to be a “scale-less form that is both familiar and otherworldly at the time”.

From the outside, the exhibition centre’s single tower-like structure will resemble “a robust monolith – its outer surface formed by the erosion of the site’s unique and often extreme weather conditions”.

Visitors will cross a glass bridge to reach the exhibition building, so that they can feel the elements first hand as they transition over to the vault-like space. This will also grant them a view of spectacular surrounding geological formations and the views of the Arc from the outside. 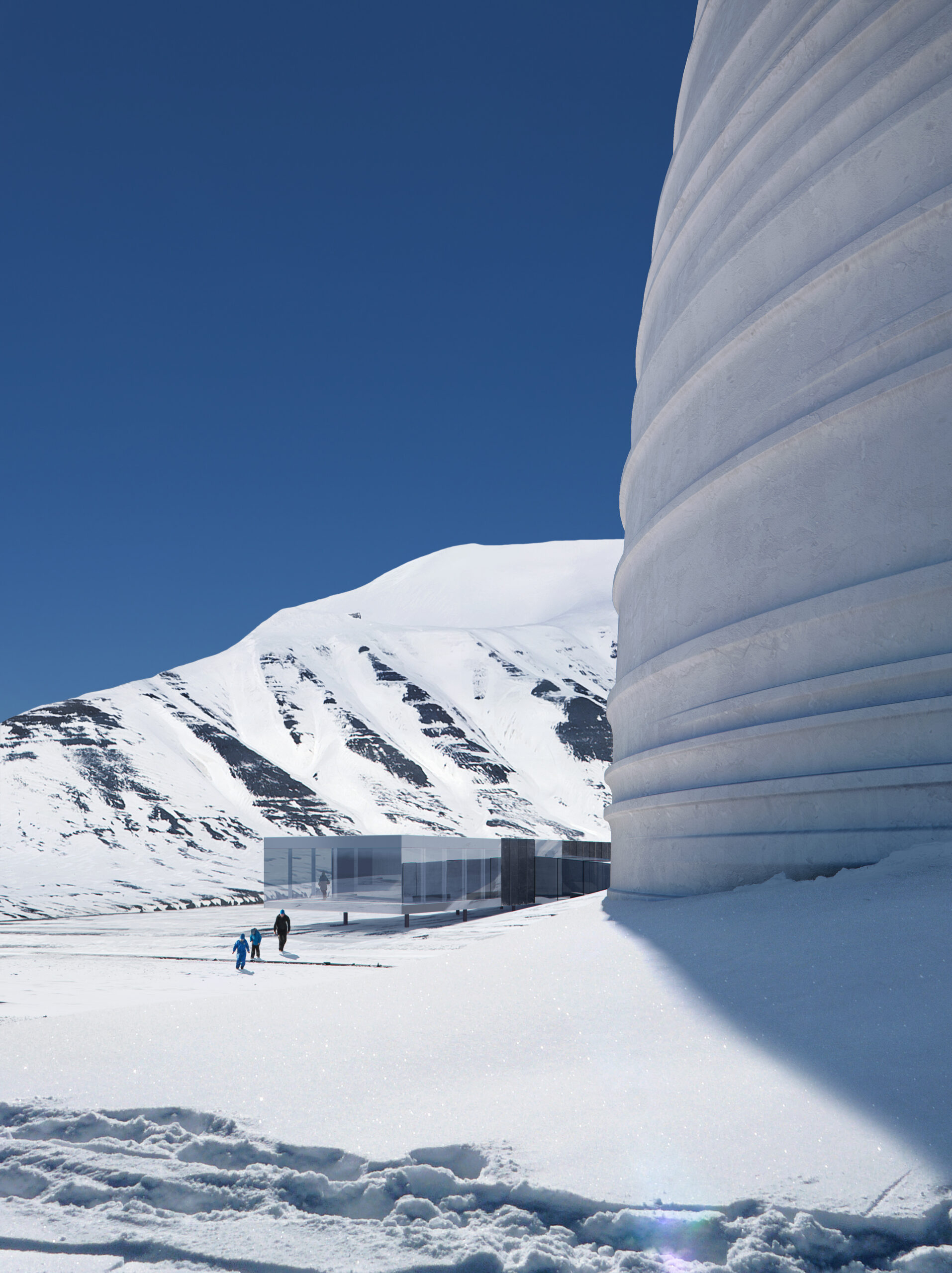 According to recent a report from ENR, the construction of the Arc has been delayed by the pandemic, and abnormally warm temperatures have affected the permafrost surrounding the structure (it was scheduled to open in 2022).

Snøhetta senior architect, Julie Aars, told ENR. “Svalbard has been hit hard because tourism has gone down. Things are a bit tough there.”

Globetrender hopes that such an important, compelling project is able to reach a state of completion, and will continue to provide updates.