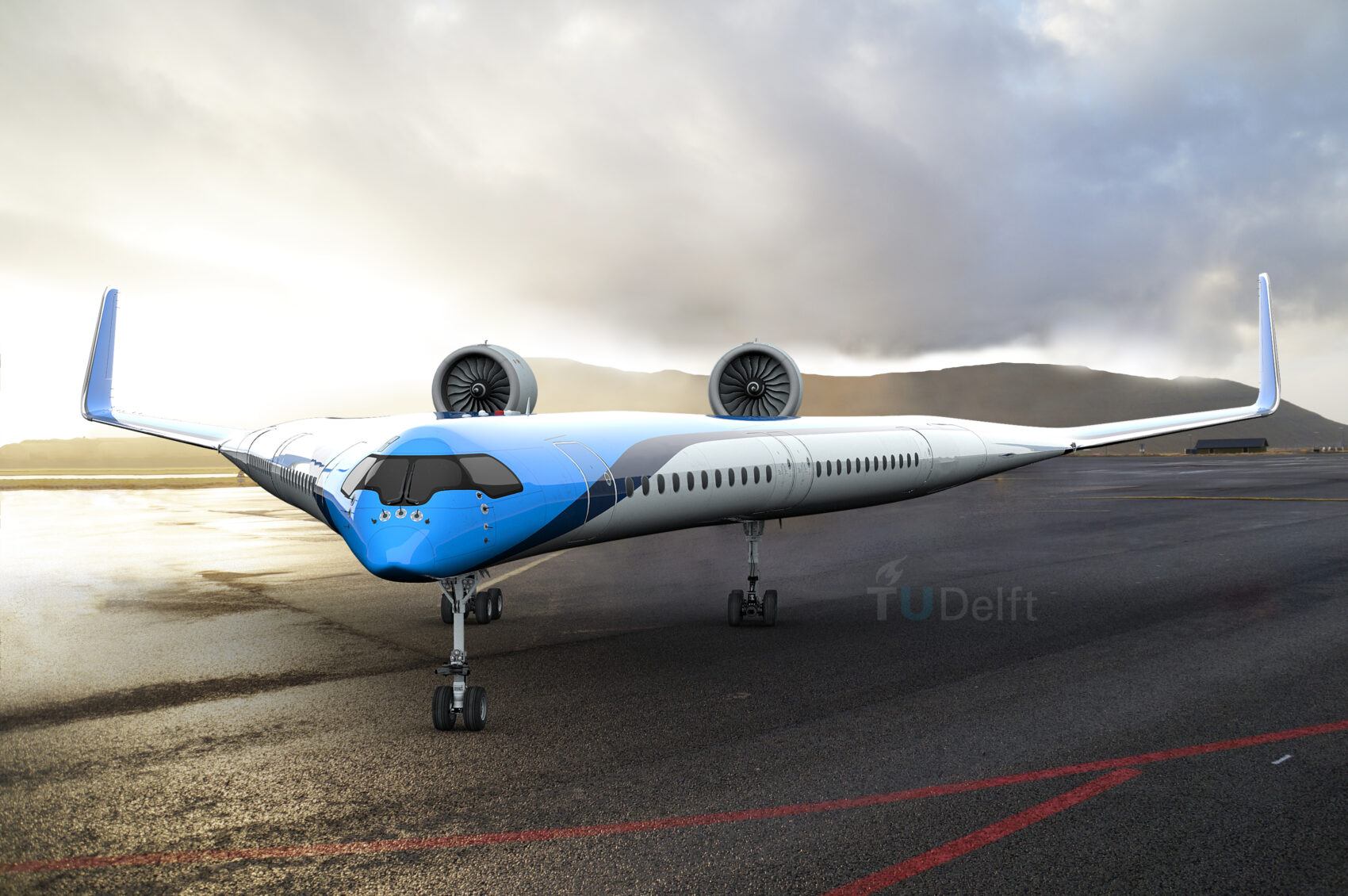 Global aviation is responsible for about 2.5 per cent of total global CO2 emission but is set to increase rapidly as the number of kilometres passengers fly each year goes up at about 4.5-5 per cent per year. To help combat this, the Netherlands wants to curb aviation’s CO2 emissions by 35 per cent by the end of 2030. And it’s not planning on achieving this by flying less.

Thanks to an improved aerodynamic shape and reduced weight, the Flying-V would use 20 per cent less fuel than the Airbus A350 (the most advanced aircraft in the world today), lessening the C02 emissions per flight.

The new aircraft would be propelled by the most fuel-efficient turbofan engines that exist. In its present design it still flies on kerosene but it can easily be adapted to make use of innovations in the propulsion system – by using electrically boosted turbofans for example.

Using existing airport infrastructure such as gates, hangars and runways could be done without difficulty because the Flying-V would have the same wingspan (65 metres) as the A350 and, in terms of length (55 metres), would be shorter.

Overall, the Flying-V would be smaller than the A350, giving it less aerodynamic resistance, but it would carry the same number of passengers – 314 in the standard configuration – and the same volume of cargo, 160 cubic metres.

Unlike conventional single-fuselage planes, the Flying-V would integrate passenger cabins, cargo holds and fuel tanks within a pair of V-shaped wings. 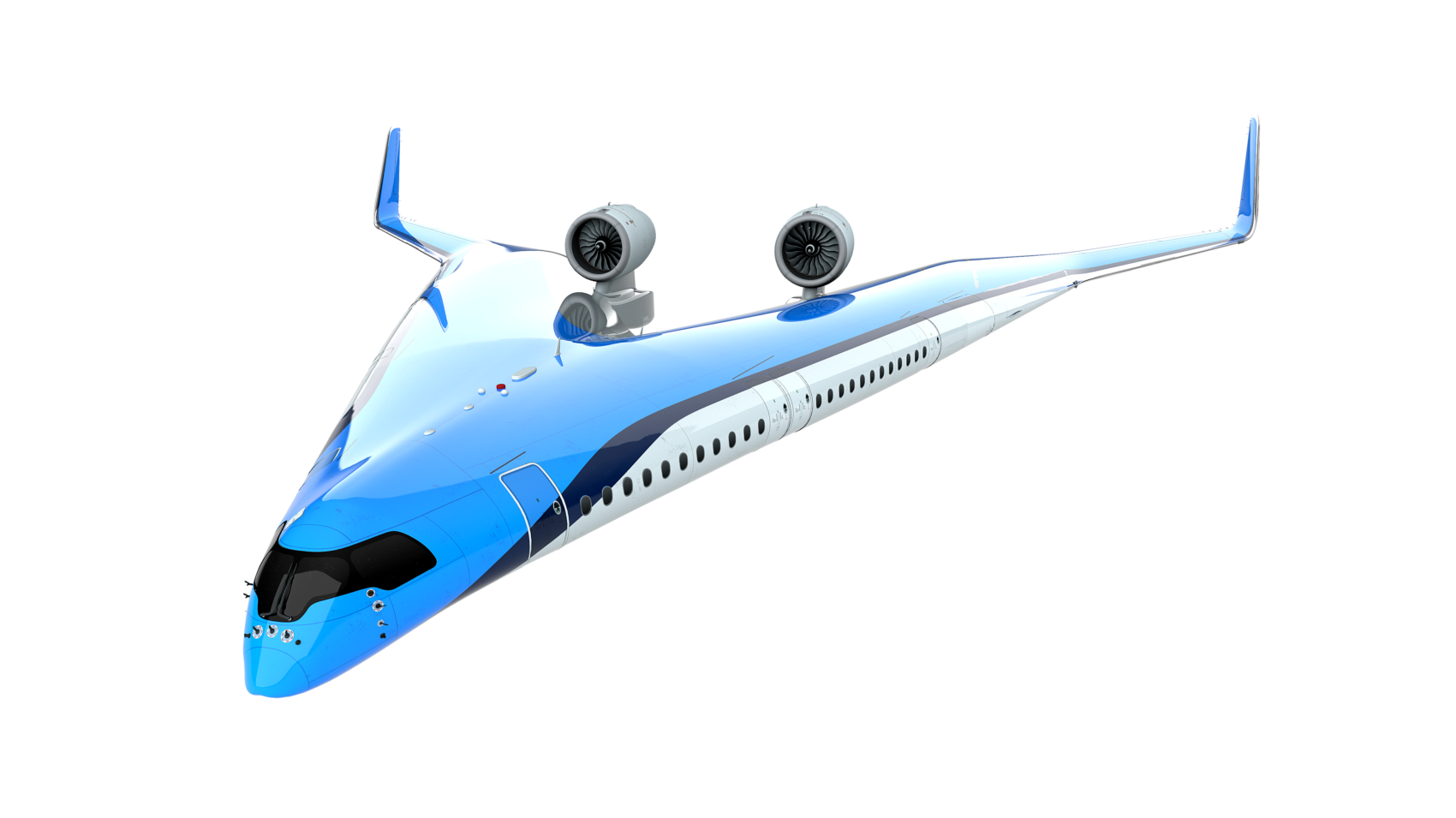 Designers say the Flying-V provides a “unique opportunity to improve the passenger experience, from the seating layout in the wings, to the design of the seats and bathrooms. But everything would have to be as lightweight as possible in order to maximise the efficiency gain the new aircraft shape provides”.

To celebrate KLM’s 100th anniversary, researchers will present a flying prototype in October, which will be used to test whether the Flying-V can remain stable and reliable while being flown at low speeds – during take-off and landing.

KLM president and CEO Pieter Elbers, says: “In recent years, KLM has developed as a pioneer in sustainability within the airline industry. The development of aviation has given the world a great deal, offering us an opportunity to connect people.

“This privilege is paired with a huge responsibility for our planet. KLM takes this very seriously and has therefore been investing in sustainability at different levels for many years, enabling it to develop a broad spectrum of sustainability initiatives.

“We are proud of our progressive co-operative relationship with TU Delft, which ties in well with KLM’s strategy and serves as an important milestone for us on the road to scaling-up sustainable aviation.”

Henri Werij, dean of the faculty of aerospace engineering at TU Delft Professor, says: “We are incredibly pleased to be able to co-operate with our trusted partner KLM on our combined mission to make aviation more sustainable.

“Radically new and highly energy-efficient aircraft designs such as the Flying-V are important in this respect, as are new forms of propulsion. Our ultimate aim is one of emission free flight. Our co-operation with KLM offers a tremendous opportunity to bring about real change.”