Eki hunting: the expat who cycled to every station in Tokyo

Jason Goodier is not your average Canadian expat living in Tokyo. When we met about a decade ago, we were both teaching English as a foreign language at a company called GEOS, writes Jenny Southan. But long after I returned back to the UK, he stayed on, embedding himself in a city that always felt very “other” to me, but became home for him.

Like many people who choose to live and work abroad, part of the motivation is to get to know the place in a way you never can as a short-term visitor. Jason and I climbed Mount Fuji, visited onsen hot springs, went shopping for a guitar, frequented the international food hall in Tachikawa, rented VHS videos, and had a Mexican-themed Christmas dinner in an Irish pub. On Thursdays we would go to a drunken “Stonecutters” dinner with friends at a local izakaya.

It’s safe to say that, over the years, Jason has got to know Tokyo pretty well. But on May 14, 2016, he decided to take things to the next level. He set about exploring the Japanese capital’s famous public transport system in a way no one (surely?) has ever done before – by cycling to every single one of its 727 railway stations.

He called the project “Eki Hunting” because eki is Japanese for station. “I came up with the idea after doing some riding in various places and thought ‘I wonder if I could ride to every station in Tokyo’. So I started and took a picture of myself at each station. When I showed the pictures to friends, they thought it was pretty funny and encouraged me to continue. My girlfriend at the time suggested starting a blog of some sort to chronicle the project and that’s when I came up with the idea of the map,” says Jason.

Jason turned to Google Maps to create pin drop micro blogs for every station he visited, and included a description of each one, flagged up good restaurants and places of curiosity. It’s the ultimate, interactive, deep dive travel guide, allowing fellow urban explorers to zoom in on every eki and learn more about it. Where did he begin? The station closest to his home in Tachikawa, Shibasaki-Taiikukan.

During his rides, from house to eki after eki, and back again, he returned to the place we used to work, Toyoda, on the Chuo line. He writes: “Toyoda is a place I know very well. My first job in Japan was located just in front of the station. I worked here for six years. Toyoda has changed a lot recently too. A new AEON mall has opened on the site of what used to be an old series of shops which looked as if they had been preserved since the 50s. It’s sad to see these older neighbourhoods disappear.”

He went to Kokobunji: “It is a station I have been to numerous times over the years. The station area on the north side is currently undergoing a massive redevelopment. Although it is a crossing point of different lines by different companies, they all share the same large station building. There is a burger shop, This Is The Burger, located near the south entrance to the station. In actuality, this shop is the only remaining location of a very small chain that started in Tachikawa. It’s a decent burger. Here’s a review which will give you a good idea what to expect.”

He also cycled to Shinjuku, the world’s busiest station (I got lost in there on numerous occasions). He writes: “Shinjuku station goes deep underground in some spots. However, most of the main buildings that makes up the station are large department stores, usually owned by the same companies that operate the trains. Odakyu, for example, has an immense department store right above their train station entrance.”

Why did Jason do all this by bike, and not simply take the train? That in itself would have been an achievement.

He says: “First of all, exercise. But more importantly, I wanted to know the ‘spaces in between’. So often when we travel by train, we tend to stick to the areas near the stations. I wanted to explore places I’d never been before.”

How long did it take to complete? “Just under one calendar year, which was one of my goals. I finished the last ride on May 9th, 2017.” And what was the last station? Mitakesan, 1,000 metres up on Mount Mitake. 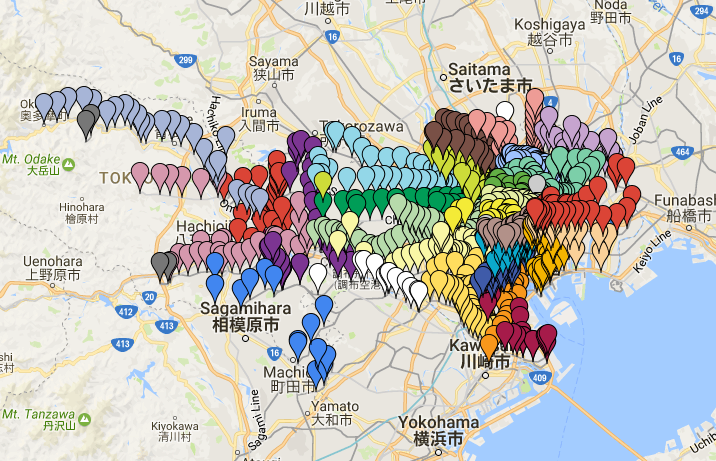 Jason writes: “It was a rough climb up but I actually managed much better than Takao-san a few weeks earlier. Here I only ended up pushing the bike on the very steepest spots which amounted to about 50-100 meters of about a 3km ride up. Both me and my buddy were surprised for sure. Surprisingly, I wasn’t that tired at the top, I was feeling pretty good and happy with the climb. The mountain itself is quite nice and I’d like to come back and visit the entire ‘village’ at the top.

“After a break, I headed back down, my buddy took the cable car, I retraced my path. Going down is quite steep in spots but again I managed to ride over 90 per cent of it. My hands were really sore from squeezing the brakes, though. On the way back, we celebrated with pizza at a nice restaurant near the bottom of the mountain.
It was a really nice way to officially cap off the Tokyo Eki Hunt.”

How did you organise the mission? Jason says: “A lot of research online. I started with lists I found on Wikipedia, and crossreferenced them with maps to make a full list of stations. I investigated which stations are actually multiple stations (some stations have trains and subways which are actually separate) and amended the list. I  broke down Tokyo into sections and plotted routes. Then lots of riding!”

Did you ever decide to hop on a train to get home? “I did not ride any trains or other mass transport on these rides. I rode my bike from home and back each time. The only places which were not done on bike were the two monorail stations inside Ueno Zoo because you can’t bring bikes inside. So I parked just outside and went to those stations on foot. Also, I partially pushed my bike on Mount Takao.”

What were your favourite stations? “There were plenty of interesting ones. Some station buildings on the Okutama line are made of wood and have a nice traditional style. Togoshi-Ginza on the Tokyu Ikegami line is a great example of how new modern station buildings can be made that are very aesthetically pleasing. But I think the nicest station is Tokyo itself. It’s beautiful inside and out. Very iconic.” 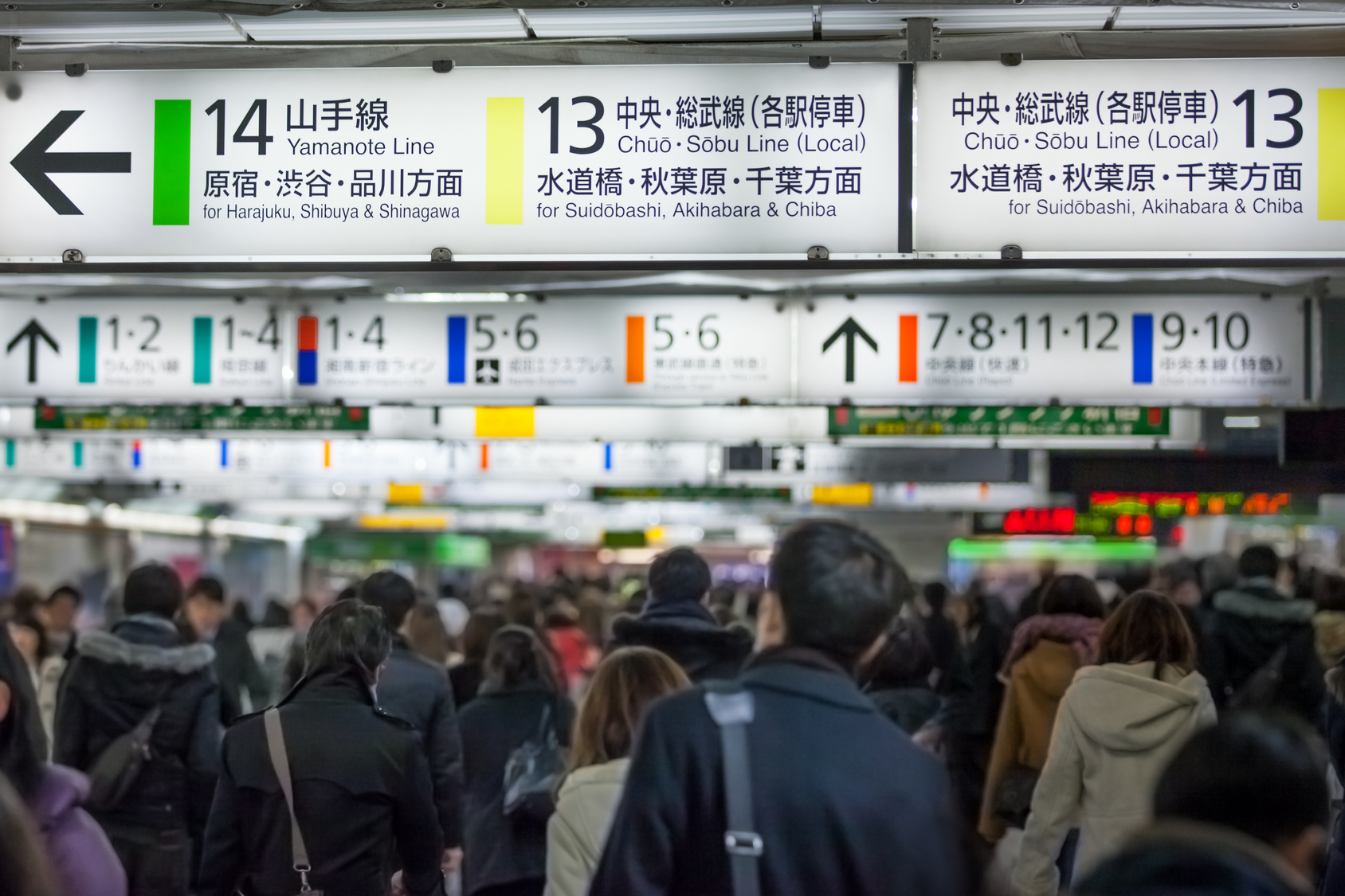 What did you learn about Tokyo? “I discovered so many neighborhoods that I had never visited before that have their own unique charms. Riding around at street level also makes you realise just how many people live in Tokyo, including in the central areas. You can see all kinds of areas – modern, old, rich, poor, crowded, open, noisy, quiet…”

And what did you learn about yourself? “Not sure yet,” says Jason. “I need more time to reflect on it. But physically, I know what I can do on a bike now. I can ride 120km or climb 900 metres and feel fine, which was unthinkable a year ago. This project took my mild obsession with making lists and studying maps to new levels. My persistence seems to have paid off.”

What next? “I’d like to go back and visit many areas I found again. I didn’t have much time to really explore while I was out passing through, so to speak. So for the next few months, I’m planning to ride out to some of these places again. But I will Eki Hunting, I’ve already started making lists and maps of Tokyo’s neighbours to the north and south, Saitama and Kanagawa. I’m currently thinking of starting to ride there in the fall, after the summer heat dies down a bit.”