One of the most authoritarian and isolated countries on the planet, North Korea is shrouded in mystery for the Western world. And now, a new book – Hotels of Pyongyang – offers a rare glimpse inside the capital’s hotels.

North Korea has been open to international tourists since 2013, but it remains one of the least visited destination in the world. Up to 6,000 Westerners travel to the nation each year, and all tourism is controlled by state-run tourism bureau. 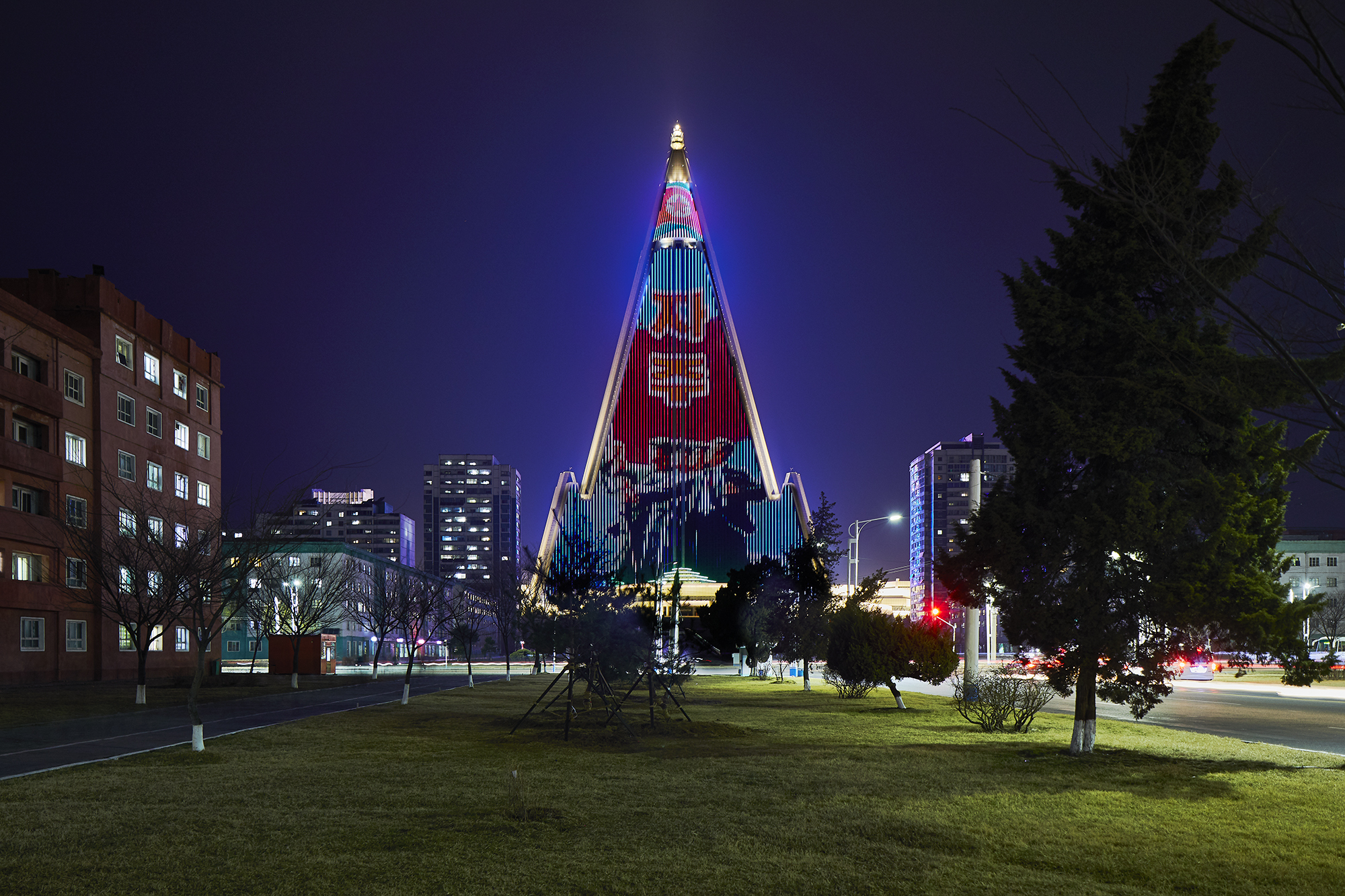 International tourists must book on to a guided group tour, where they are under constant supervision. They are forbidden from walking freely among the streets of Pyongyang, which means it’s typical for tourists to spend a considerable amount of time inside the hotel they are staying at.

“We really wanted to find a way we could document all these hotels of Pyongyang, because when you’re in North Korea as a tourist, your experience is quite moulded by your time spent in hotels,” says Scullin. “But it’s also in the hotel where you get to spend a lot of time with your local guides, and you get to ask them about their life in North Korea.” 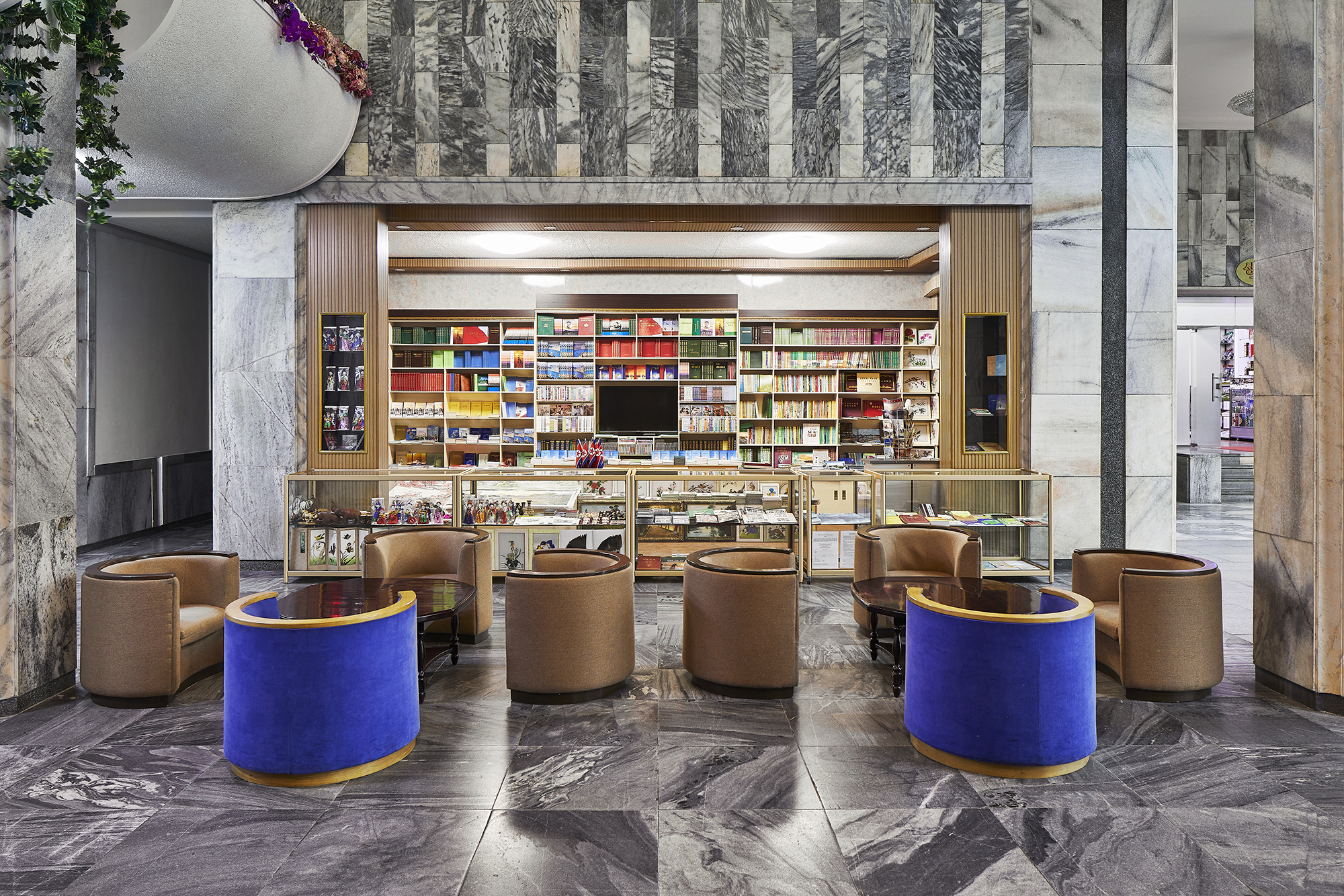 As shown in Hotels of Pyongyang, guests can dine in grand banquet halls, sing their heart out in kitsch karaoke rooms and view the city from above from revolving restaurants. 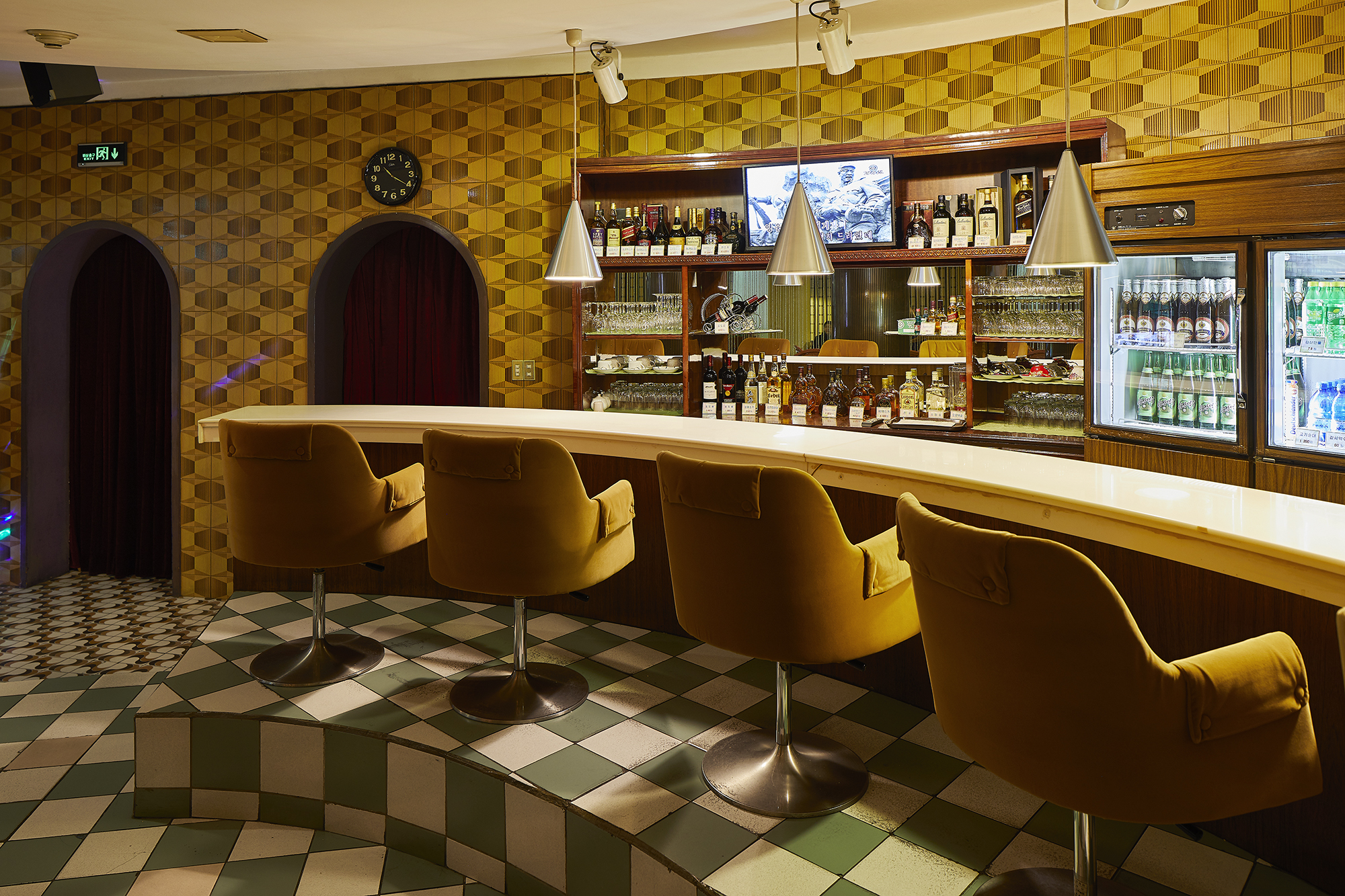 The book captures the variety and intrigue of North Korean architecture and design – from its Brutalist Soviet exteriors to its glistening white marble interiors. It also features portraits of hotel staff. 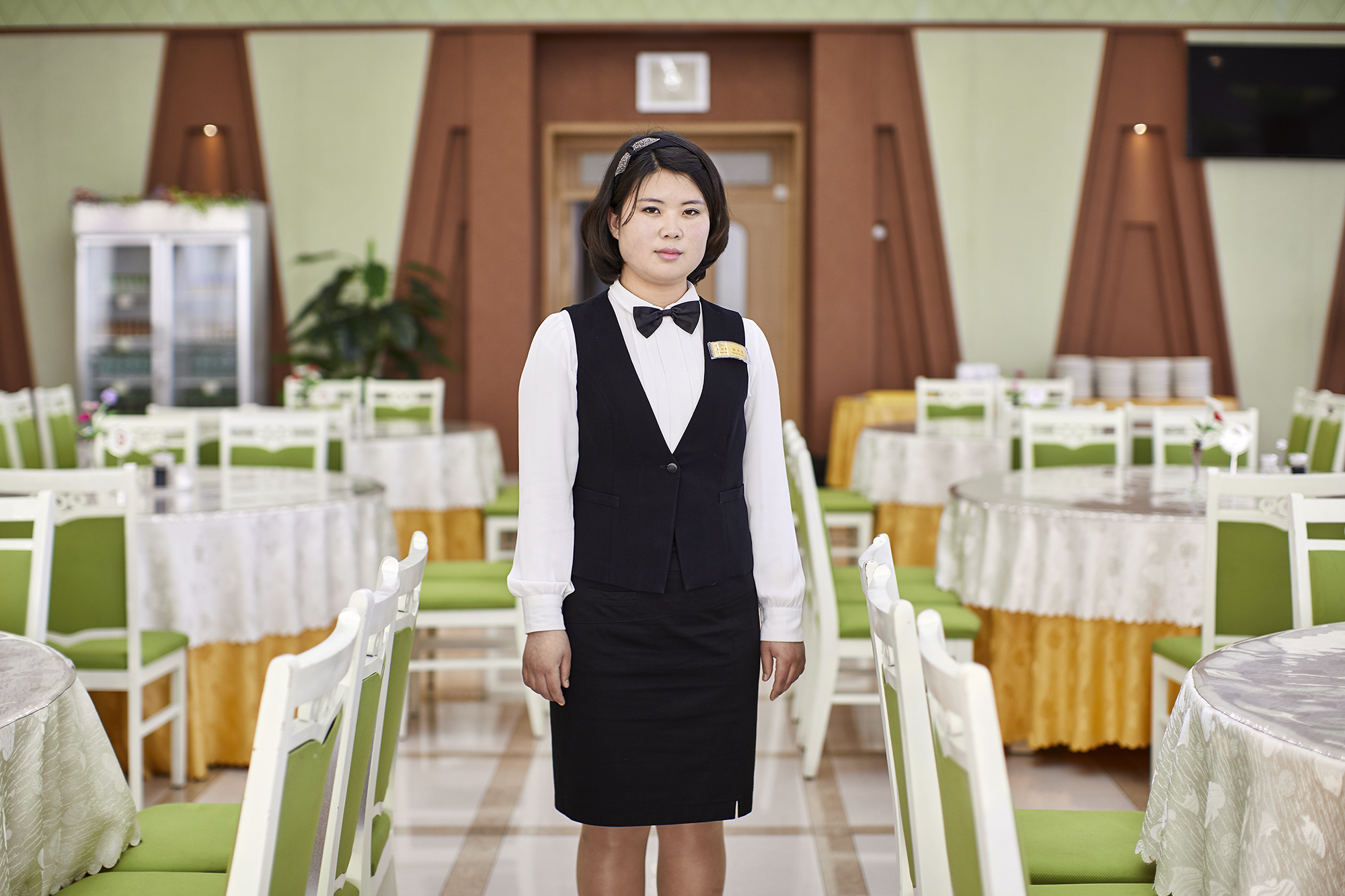 “I think the book is very special because it documents something which hasn’t been documented in bulk like that before – the interiors of all the tourist hotels in Pyongyang,” says Reed.

“We worked really hard – as did our guides – to make sure we got everything that James thought was necessary to show a really well-rounded documentation of what’s in the hotels.”

Scullin adds: “What we really capture in the book is how idiosyncratic and individual each of the hotels are. They all do have a similar Brutalist feeling the you look at the exterior, but internally they’re so different. They all have really different colour palettes, and you don’t seem to see the same furniture twice.” 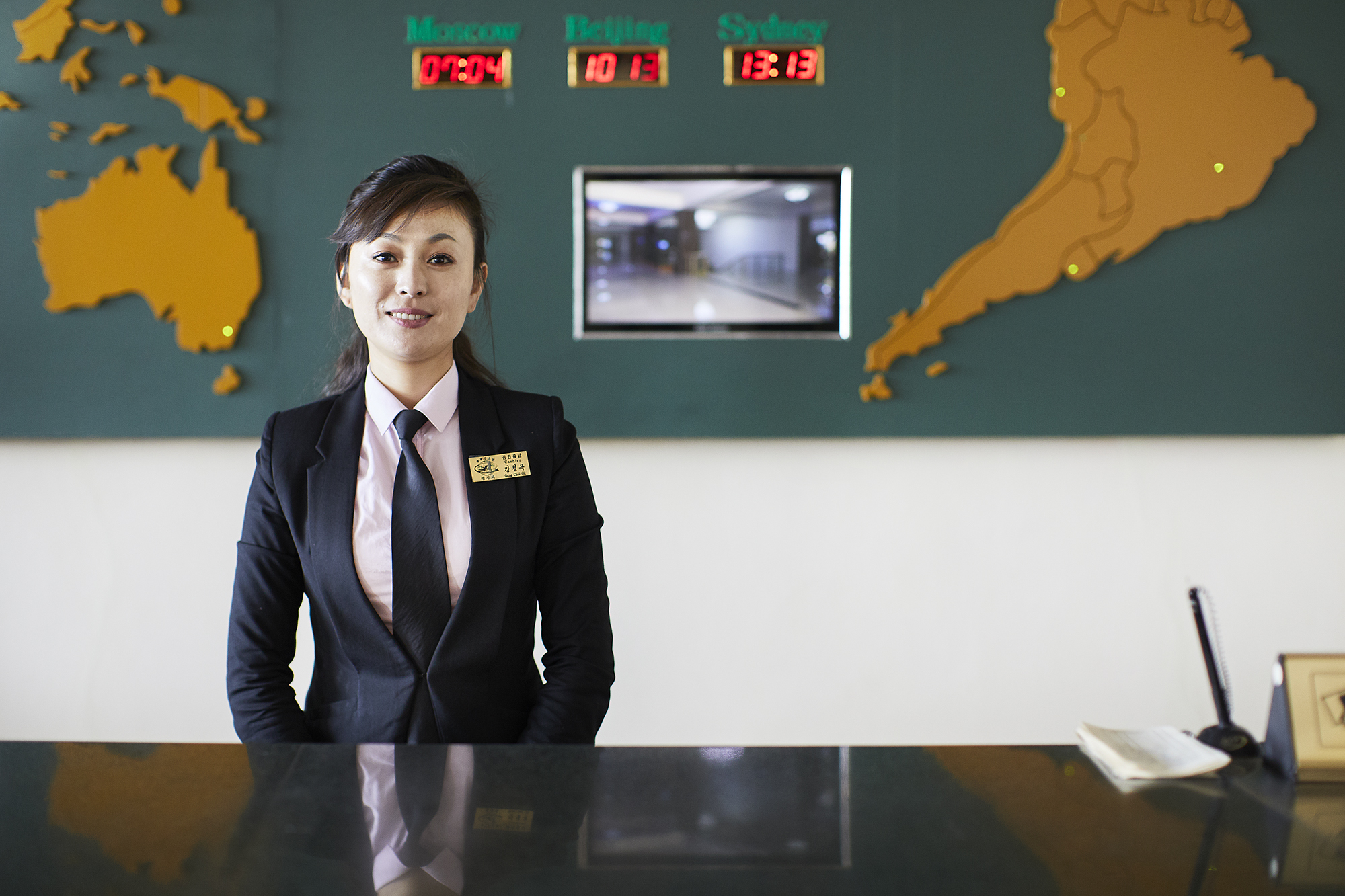 Hotels of Pyongyang is available to buy worldwide from September 15, 2020 – here is an excerpt by by Charles Kennedy…

“Upon arriving in the Democratic People’s Republic of Korea (DPRK), the sensation of an aesthetically different reality is immediate. Political messaging substitutes advertising, fashion is uniform, the impact of economic isolation is apparent and the individual gives way to the collective.

“Absent from the West’s cultural influence and systems of commerce, the DPRK has forged its own idiosyncratic path in isolation from the world, ironically making the country more fascinating to outsiders.

“In our project Hotels of North Korea, we have documented hotels to explore the aesthetics of the country that borrows little influence from the outside world and is spurred by Juche, the country’s national ideology of self-reliance.

“Each visitor’s journey to the DPRK is defined in part by the experience of the hotel. Since my first visit there in 2012, I have always enjoyed the otherworldly aura of these hotels. From the elaborately lit dining halls with hostesses gliding about to the groovy 70s kitsch of the karaoke rooms, each hotel charms in their uniqueness.

“With Pyongyang mostly razed during the Korean War, reconstruction has paved the way for architecture to define a country that has literally risen the ashes. Hotels occupy prime real estate on Pyongyang’s pastel urban skyline.

“In co-ordination with Juche Travel Services (JTS) and the Korean International Travel Company (KITC), photographer Nicole Reed and I embarked on our project in April 2019.

“With our KITC guides in tow, we embarked on documenting each of Pyongyang’s hotels that host foreign visitors in an attempt to document the lobbies, dining halls, swimming pools and karaoke restaurants of each establishment.

“While the photos themselves may seem to enforce the trope of DPRK hotels being desolate and unoccupied, all hotels in Pyongyang during our visit were without vacancy. The majority of the guests being Chinese tourists visiting the DPRK on a nostalgia trip for how China used look.

“With tourists kept busy sightseeing around town, the hotels tend to be quiet during the day and increasing in activity once the tourists return in the evening.

“Each hotel is individually managed and retains a sense of autonomy and has its own feel. For a country that tends to be rather homogenised, each hotel has its own features, colour schemes and interior styles. With dedicated management, hotels differ their furniture and upholsteries to their tablecloths and light fittings.

“Those permitted to live in Pyongyang enjoy a privilege not afforded to other cities around the country and are usually the first to receive economic advantages. As evidence of this, the city is experiencing a transition of sorts and many of the hotels in Pyongyang have recently been refurbished or renovated with a look intended to appear more modern.

“There is a sense of irony having international hotels in an isolated city largely cut off from the world. Yet, no matter the flow of tourists, life in Pyongyang’s hotels continues unabated through the staff. Whether manning the hotel entrance, resetting tables in a dining hall or hosting a karaoke session, staff take enormous pride in their professional and respective hotel.

“Hotels of Pyongyang does not attempt to explain the full story of the DPRK. Rather, by offering a photographic glimpse into these hotels, where each choice in architecture, furniture and tablecloth reveals an individual expression not typically expected of conformist societies.”