Squeezed into a narrow, sloped, hillside lot, the roof of the Annso Hill hotel stretches 30 metres down to the street. A zigzag walkway, revealing a labyrinth of white walls, steps and glazing, is cut into its traditional grey tiles. To one side, 133 white steps lead directly to the top of the building.

Located in the ancient town of Heshun in Tengchong City, Yunnan province, China, architecture firm Studio Qi hoped to differentiate their building from neighboring shops and guesthouses with a blend of historic and hyper-minimalist design. 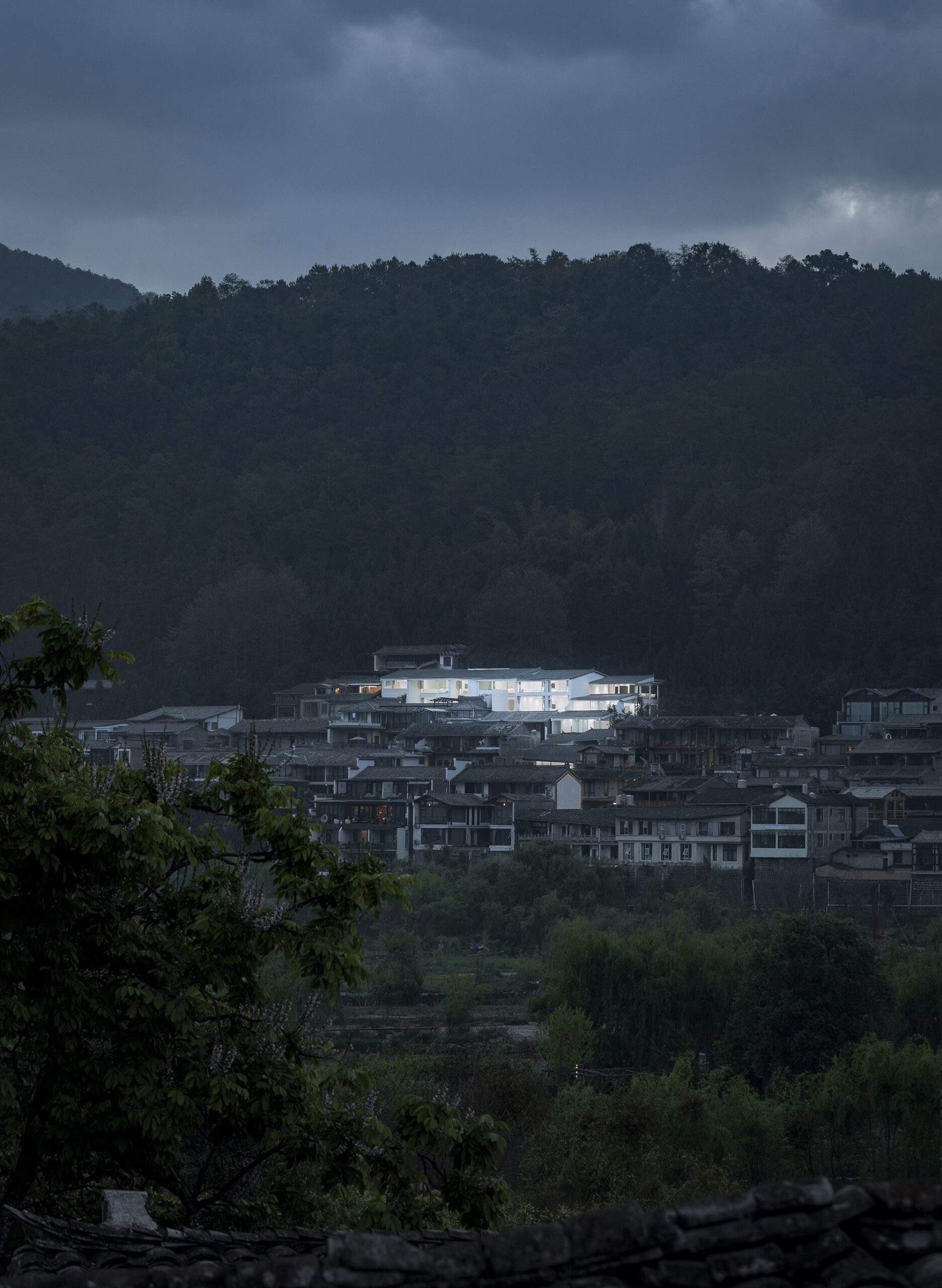 The entrance way cuts through the roofs, and leads the hotel to an ‘other’ world,” says Studio Qi, which is based out of New York and Hangzhou. “It is a play of ambiguity between roofs and walls, façades and grounds, elevations and plans; it becomes a design of an ‘architectural field’ instead of an ‘architectural room’”. 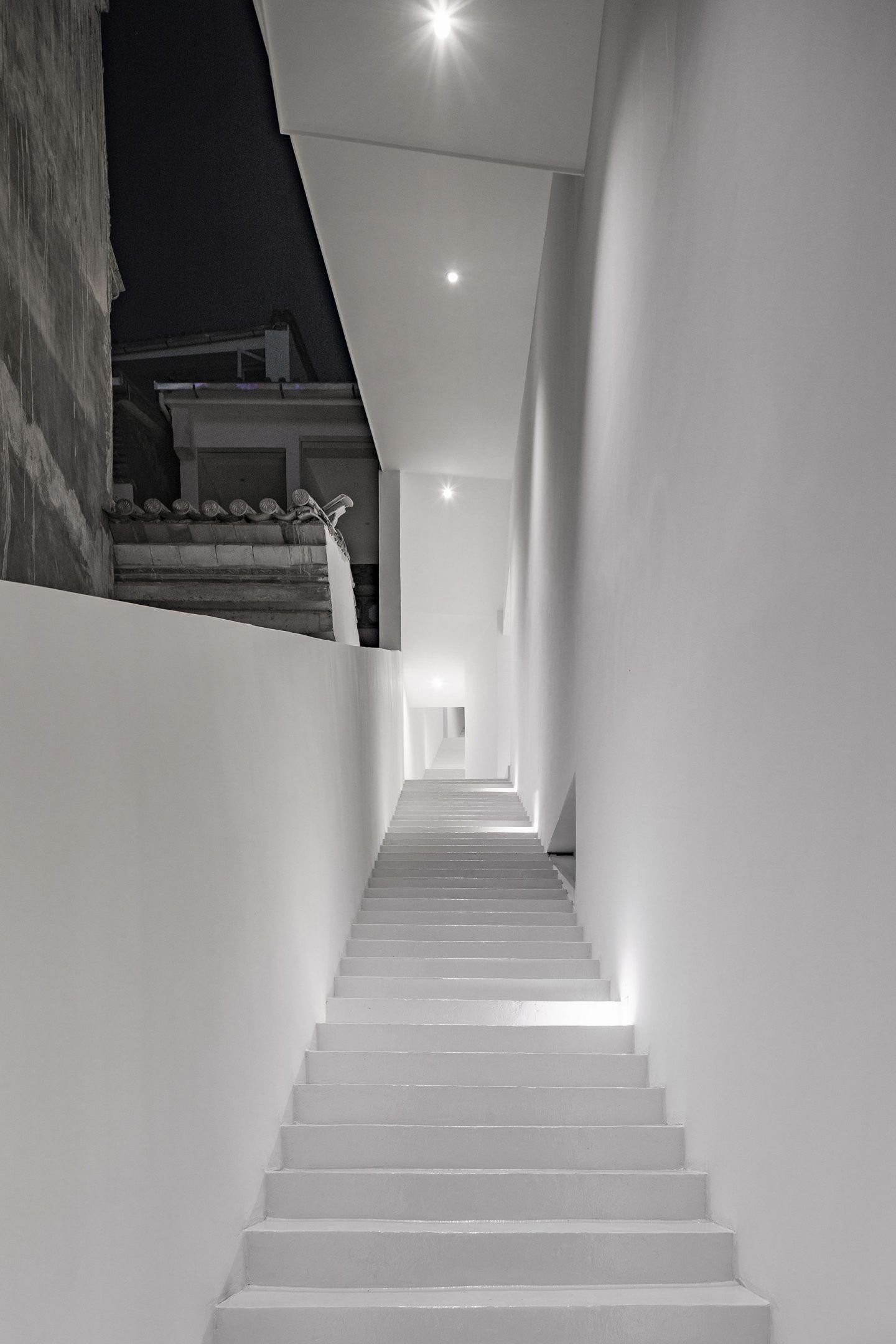 It adds: “This tilting geometry also adds a new trajectory of complex relationship that is perpendicular to the linear street, which connects both visually and spatially with the town and the ‘hidden’ hill by a sequence of living conditions.” 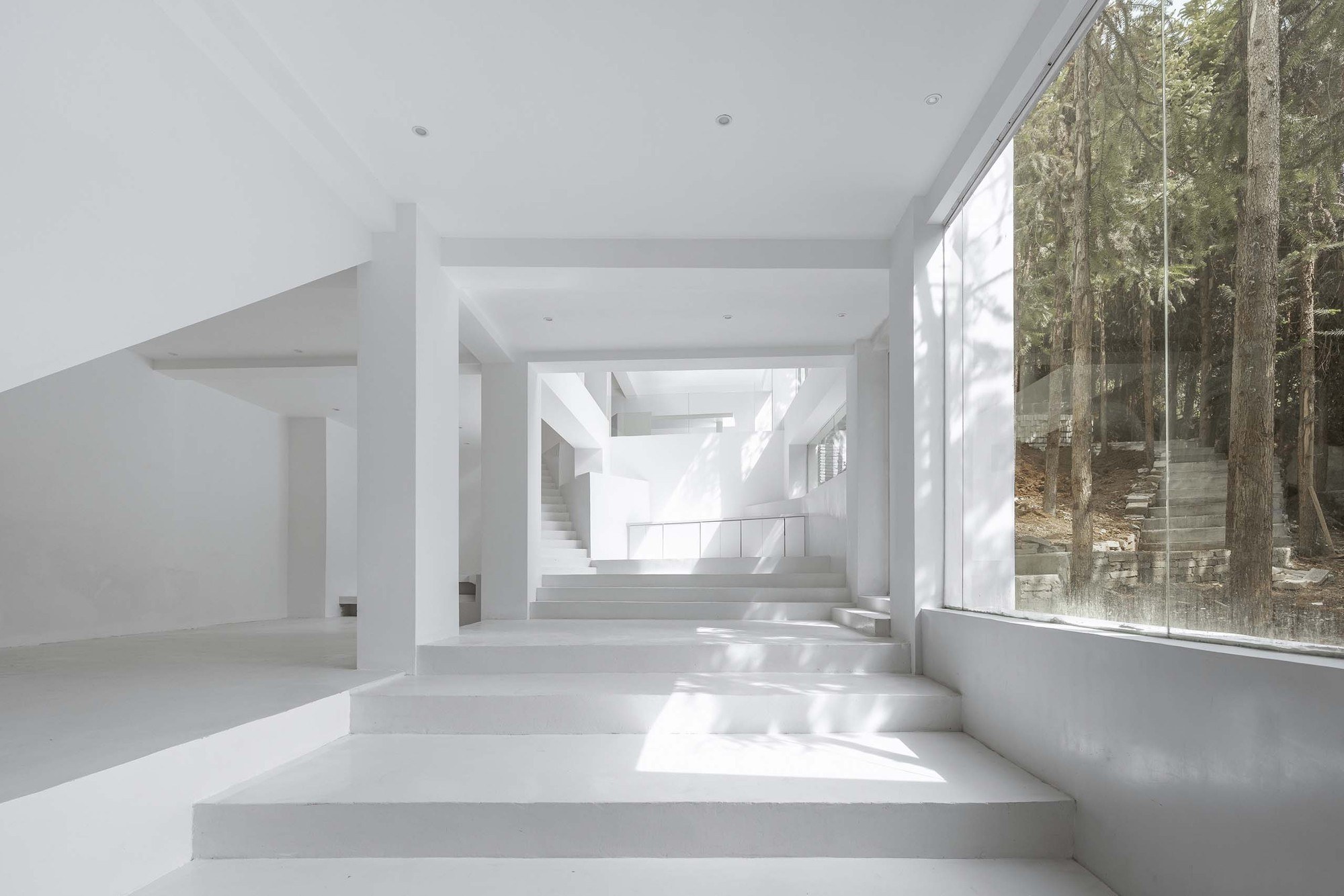 Contrasting the street facing entryway, which fits into a space only 13 metres wide, and with a height difference of 16 metres, the hotel’s main rooms (of which there are 15) form a perpendicular L-shape at the top of the hill. Unveiled in 2019, the property backs on to green forest, offering an escape from the busy city. 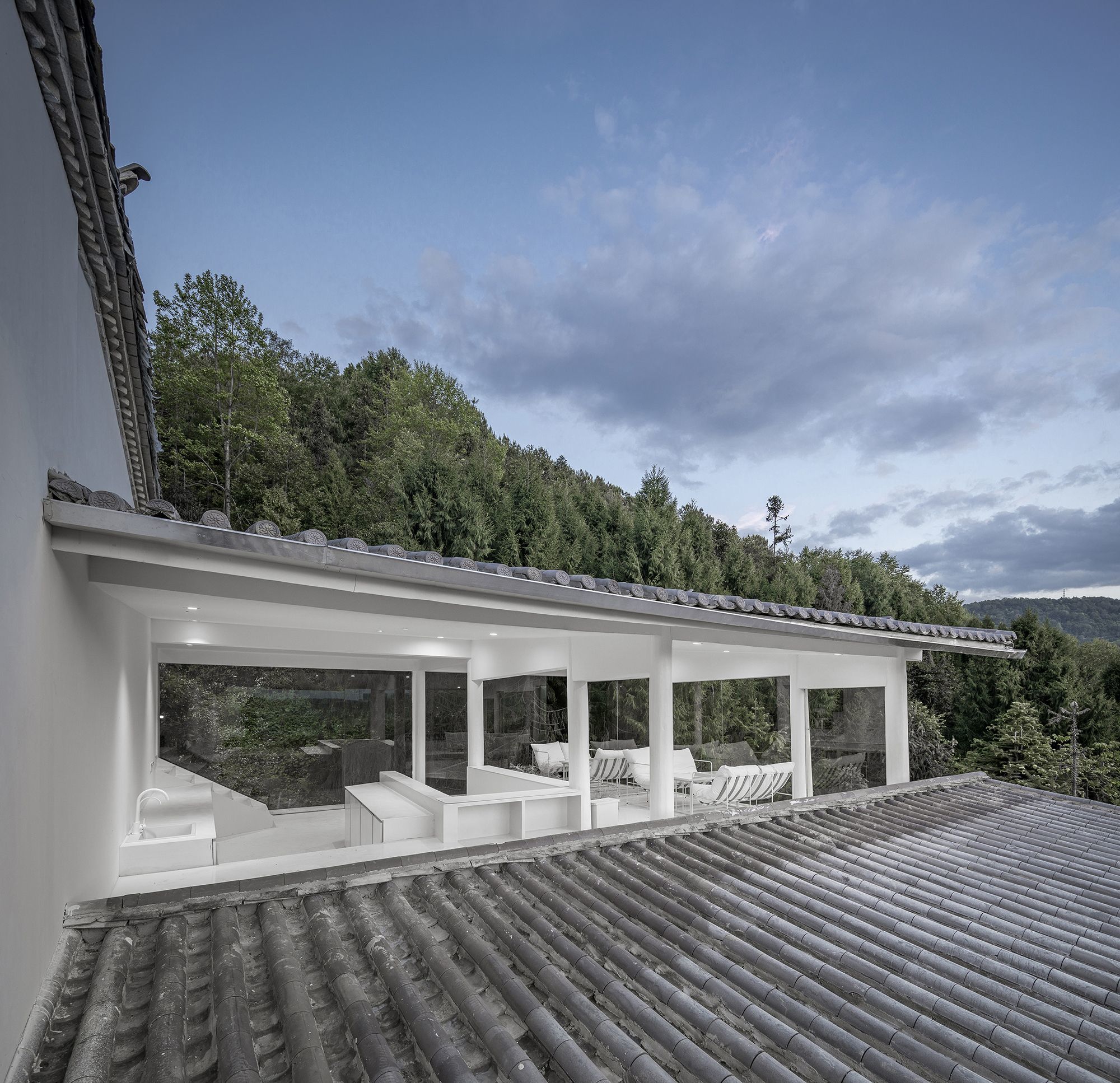 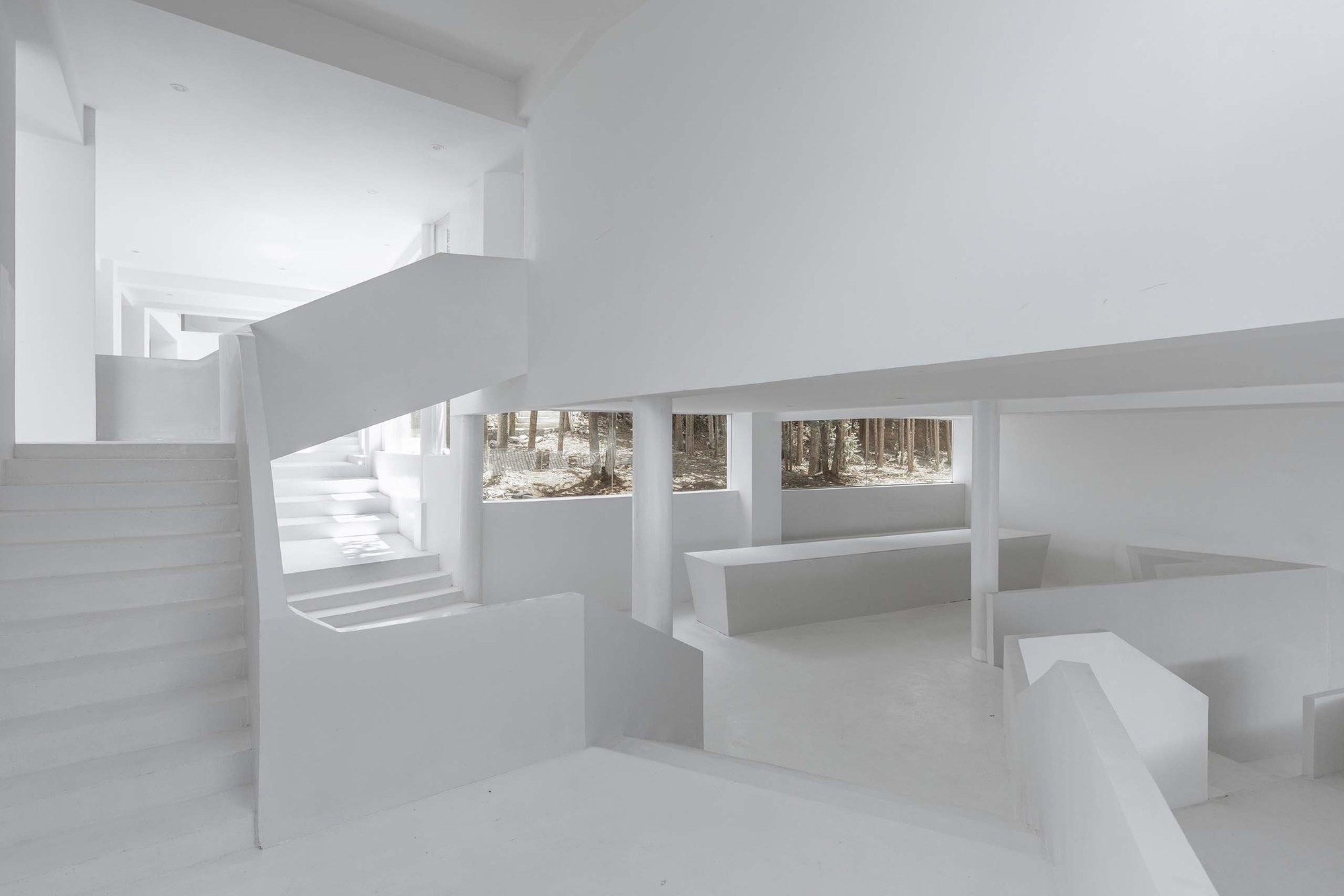 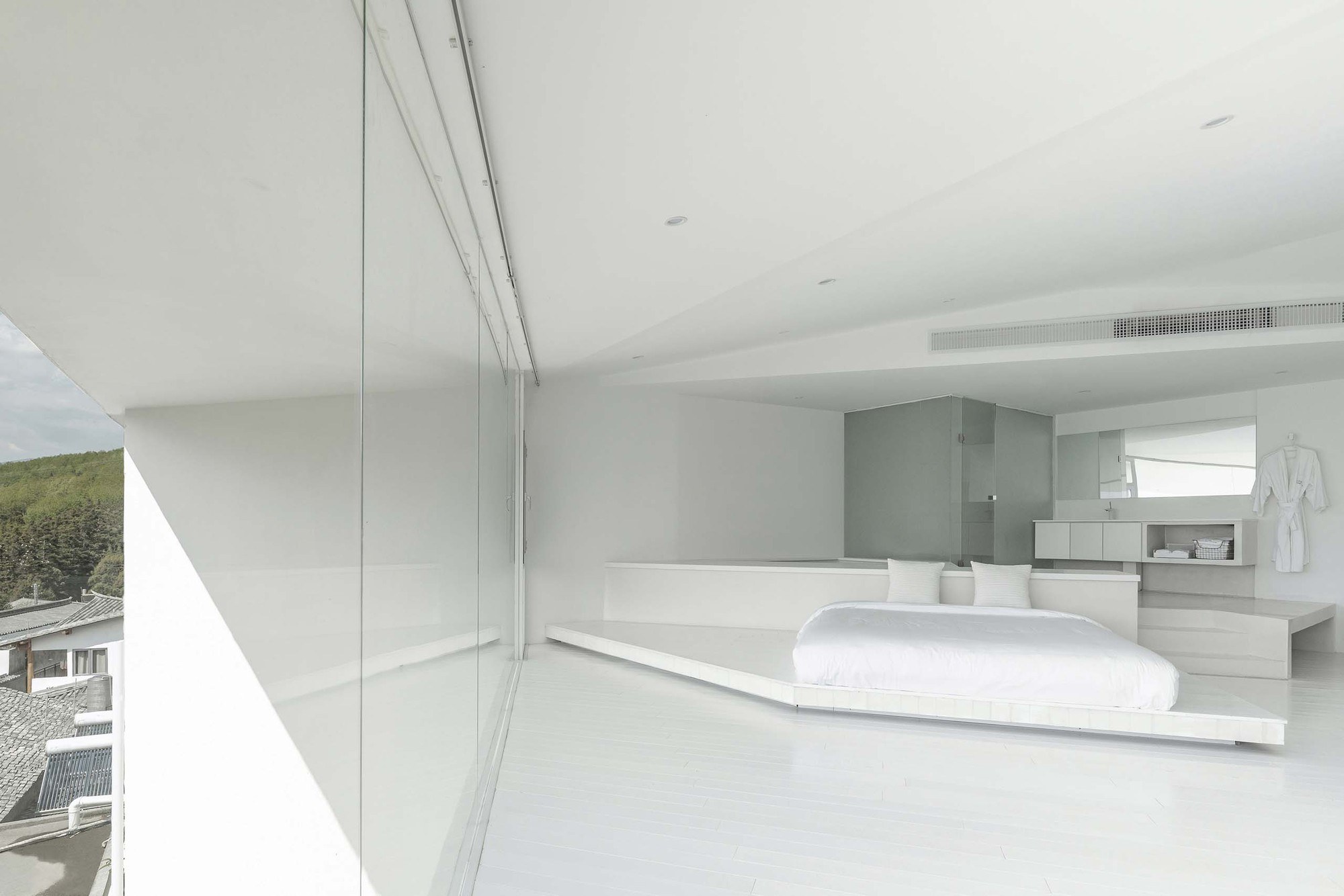 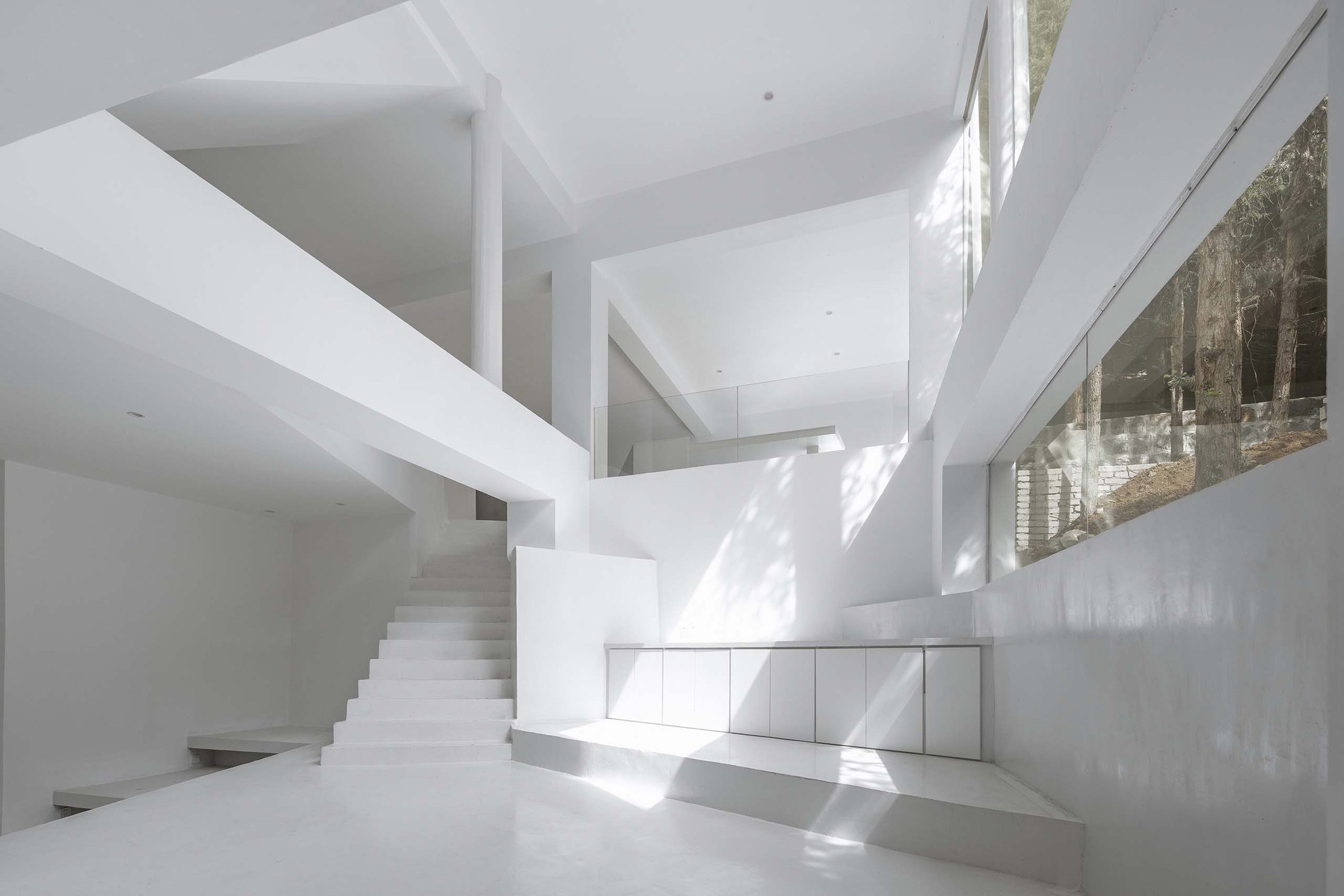 Inside, the walls, floors, and all furniture are finished in white. Only the expansive windows let in colour, from the grey and brown street to green forest. To add depth, the designers have made internal pillars, beams, overlapping ceilings and enlarged steps visible, retaining a three dimensional interior view. 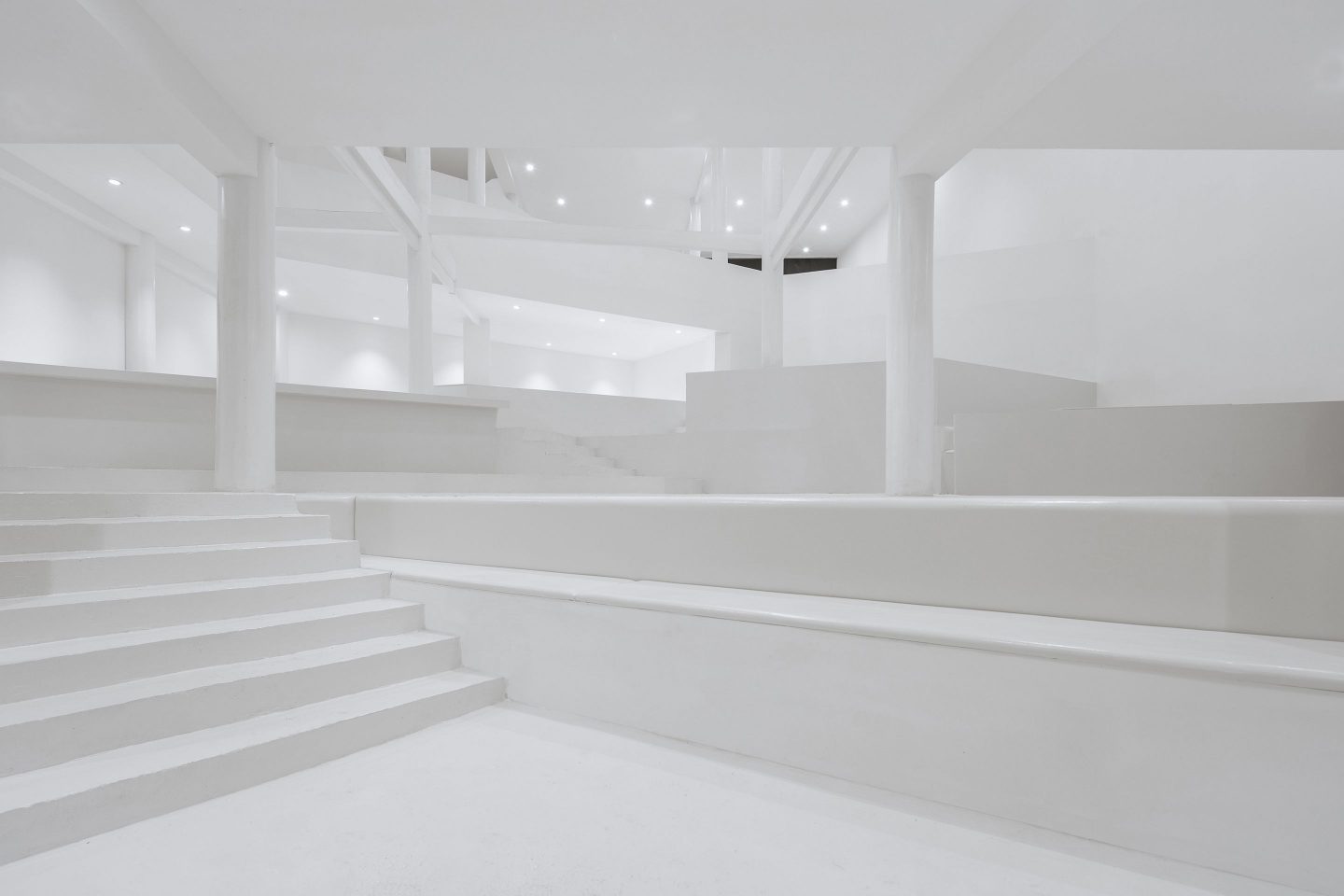 “There is an emphasis on the play of light and shadow through manipulating the geometrical relationship between walls and windows. All objects in the hotel-rooms are arranged in the lower horizontal zone, leaving the above space to collect the grand views of the outside,” says Studio Qi. 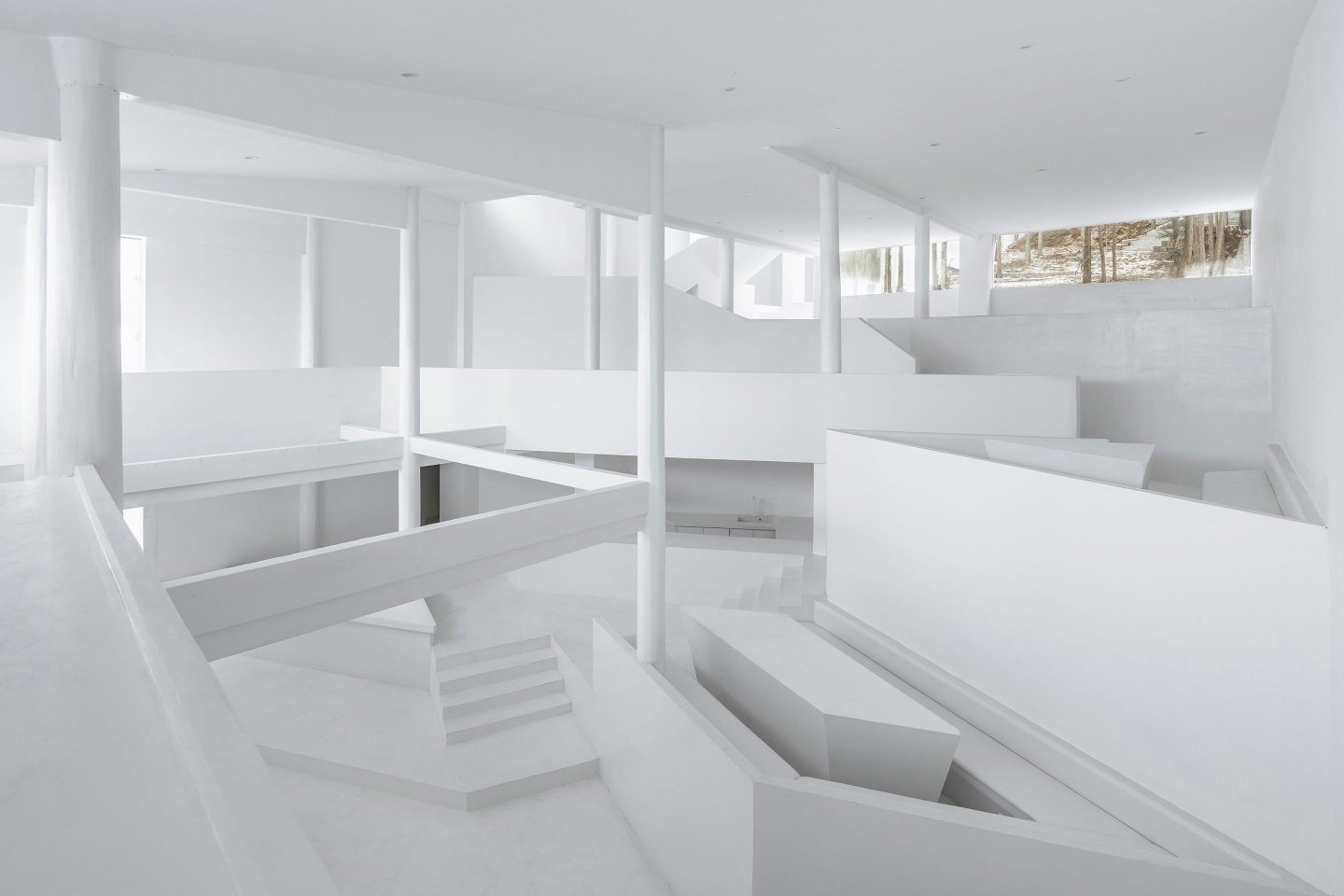 At the rear, an outdoor “flying corridor” connects the Annso Hill hotel’s rooms, shaded by an overhanging roof and the forest trees. 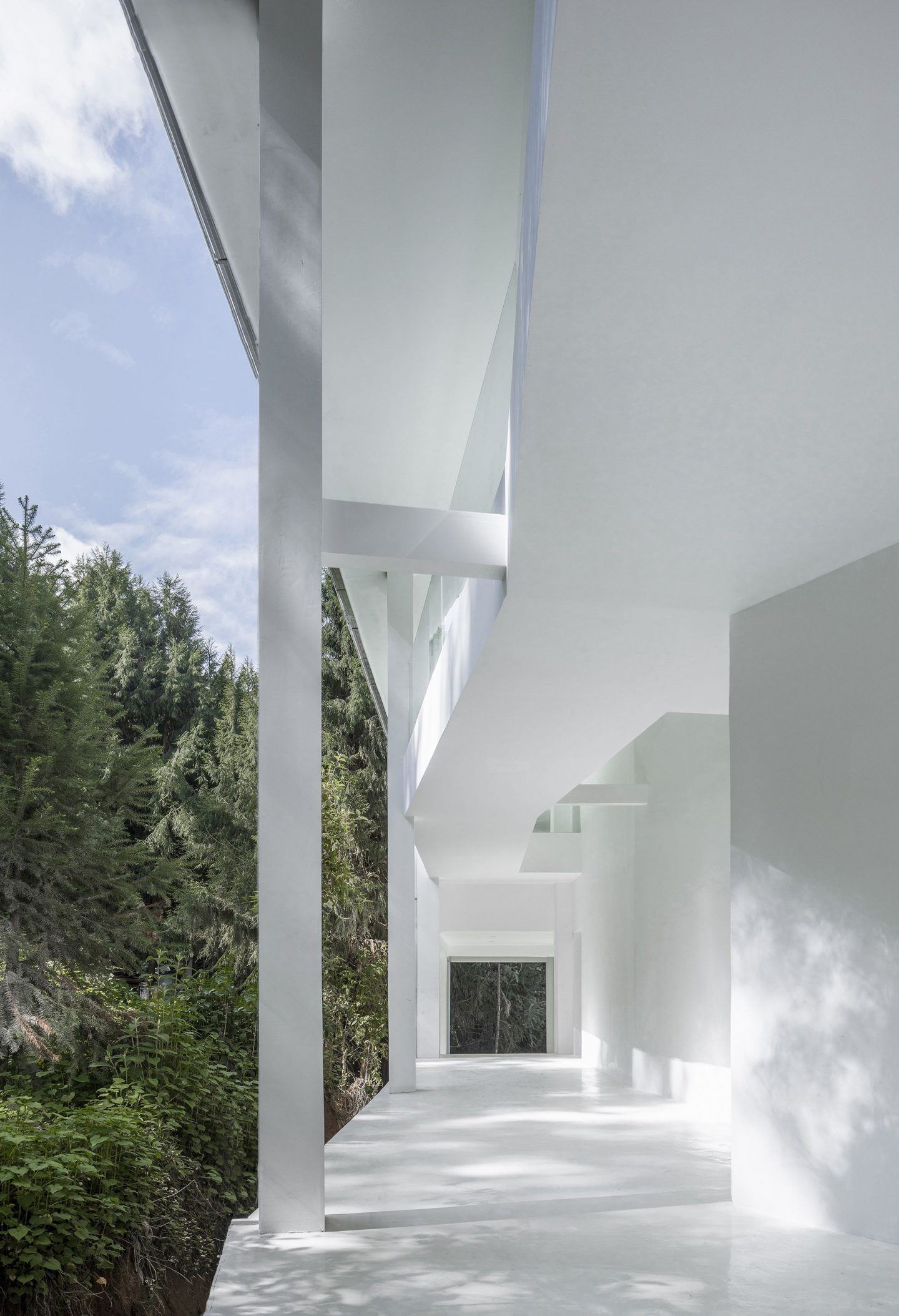 Below, the hotel also houses community spaces, including a cafe, bar, gallery, yoga studio and DIY area. “Our approach provides an open space for the public realm that is extremely rare in Heshun, as the public are drawn to any and all creative activities or social programmes,” says the architecture firm.

Studio Qi is not the only Chinese design practice to mix public and private functional elements. Elsewhere in Yunnan province, Xinzhai Coffee Manor is a hotel, museum, store, and coffee production house all in one.

According to Lonely Planet, Yunnan is “the most diverse province in all China, both in its extraordinary mix of peoples and in the splendour of its landscapes. That combination of superlative sights and many different ethnic groups has made Yunnan the trendiest destination for China’s exploding domestic tourist industry”.