Ben Brown reports on a new prototype economy class seat, the Side Slip, that has been designed to give passengers more space and speed up boarding times.

Every time I get on a plane, there’s a silent battle of elbows. The middle seat is worst of all, where space is squeezed to a minimum. But there’s good news for middle-seat flyers; a solution is on the horizon, and it’s called the Side Slip.

An innovative new Colorado company called Molon Labe Designs has created a new, roomier middle seat. By implementing a staggered design, the middle seat sits lower and further back than usual, slotting in just behind the window and aisle seats. It gives the passenger an extra three inches to spread out. And lower arm rests also mean more elbow room.

Did Molon Labe Designs just make the middle seat the best choice on the plane?

There’s good news for the airlines too. The guys behind this new design claim it will save hours in boarding time, and perhaps millions of dollars in costs. But how, exactly?

The so-called “Side Slip seat” serves a dual purpose. Because of its staggered design, the aisle seat slides on top of the middle seat. Voila, more room in the aisle for boarding.

While one passenger is busy hauling his hand luggage into the overhead containers, you simply move around him. No more waiting to file down through the plane. The man behind Molon Labe Designs, Hank Scott, sums it up: “We have the widest aisle of any airplane on the planet.”

It means airlines can complete the boarding process faster – up to ten minutes faster according to Scott. When you consider that every minute on the ground costs an airline up to US$100, this is a big deal. Faster boarding means faster turnarounds and lower fuel costs. 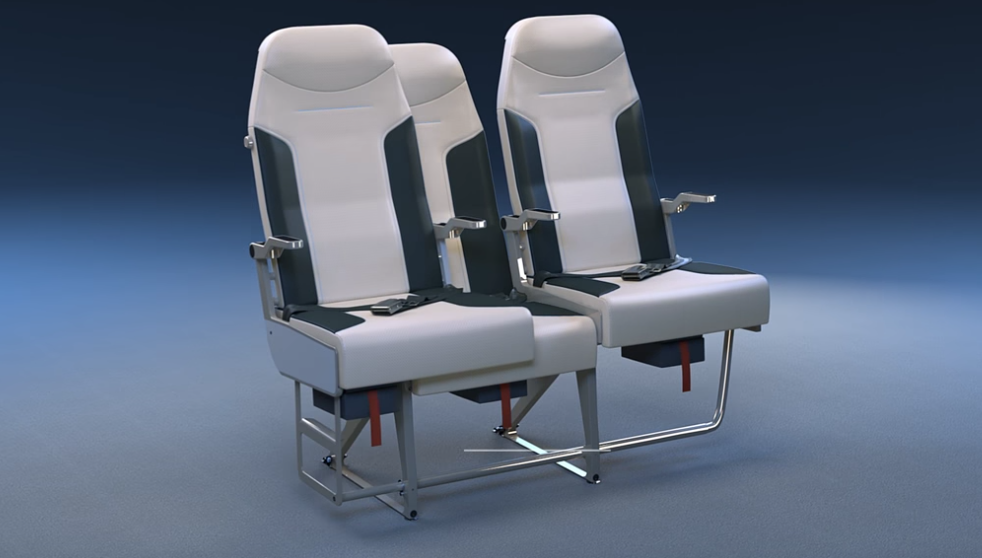 While the extra passenger room is a bonus, it is the financial saving that Scott is relying on to convince the airlines to adopt the technology. “No one is going to buy a seat because it just makes the customers happier. We offer the airlines better profits through faster turnarounds.”

Scott claims the largest airlines could save hundreds of thousands of dollars every day, and up to US$245 million per year. Every turnaround burns through fuel to power the air conditioning and electronics. Shaving just ten minutes off the ground time could drastically reduce fuel consumption.

Not only that, but those ten minutes add up quickly, and airlines could theoretically squeeze in another flight during the day.

How soon will we see the Side Slip seat?

The unique design has been in the development process for years. It is now in its fifth prototype iteration, and has just passed crash testing at the Federal Aviation Administration. This was the final rigorous test before Scott can take the design to airlines.

Still, he’s already made a head-start by cosying up to Boeing, Airbus and 24 other major airlines. Pending approval, we could see this innovative design in the skies by the end of the year.

With more space for passengers and huge savings for airlines, the Side Slip seat could be a game-changer.