A woman walks into a hotel lobby and addresses a 2.5-foot tall white robot with a smile. “Hi Connie,” she says. “How may I help you?” the toy-like automaton replies, eyes glowing green, hands forming welcome gesture. It adds: “I am Hilton’s latest concierge in training thanks to a pilot between Hilton and IBM.”

Named after Hilton’s founder Conrad Hilton, Connie is the first robot to be designed by the computer software company for the hospitality market. Using IBM Watson “natural language process and machine learning” technology and intel from “cognitive travel platform” Wayblazer, the droid provides guests with information on the local attractions, restaurants and hotel amenities based on artificial intelligence.

Jonathan Wilson, vice-president, product innovation and brand services, Hilton Worldwide, says: “We’re focused on reimagining the entire travel experience to make it smarter, easier and more enjoyable for guests. By tapping into innovative partners like IBM Watson, we’re wowing our guests in the most unpredictable ways.”

Connie is currently in residence at the Hilton McLean in Virginia – the more she interacts with guests, the more she learns, adapts and improves her customer service skills, just like a human. She can also speak multiple languages, and the great thing is that you don’t have to leave a tip.

Rob High, IBM fellow and vice-president and chief technology officer of IBM Watson, says: “This project with Hilton and Wayblazer represents an important shift in human-machine interaction, enabled by the embodiment of Watson’s cognitive computing. Watson helps Connie understand and respond naturally to the needs and interests of Hilton’s guests, which is an experience that’s particularly powerful in a hospitality setting, where it can lead to deeper guest engagement.” 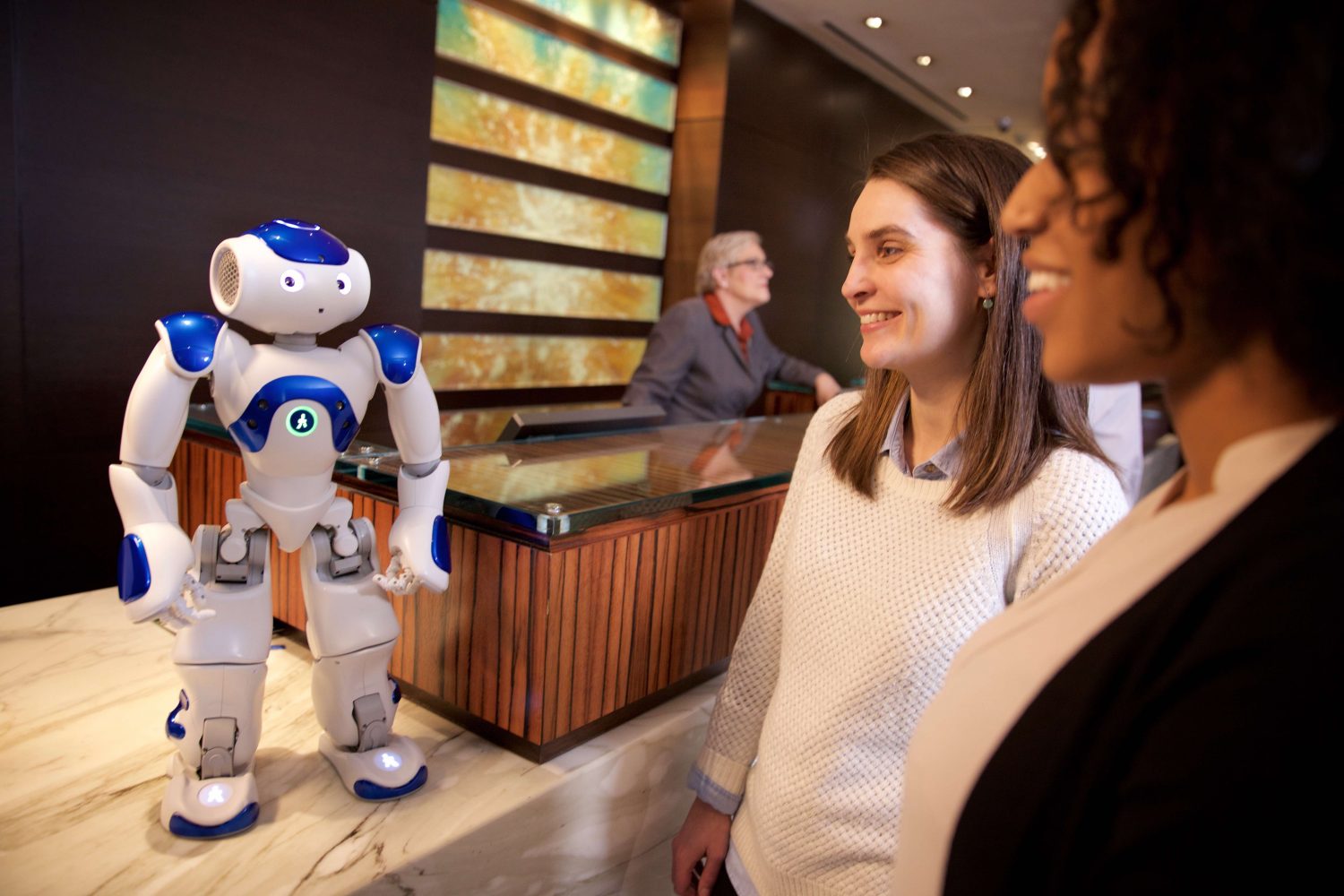 Operating for 96 years, Hilton Worldwide has a portfolio of 4,600 hotels across 13 brands, from budget to luxury. Back in 1947, just after the Second World War, it became the first chain to introduce televisions in all rooms, proving it has always been an early adopter when it comes to new technology.

Jim Holthouser, executive vice-president of global brands for Hilton Worldwide, says: “We operate in a very crowded industry so innovation is key. Innovation has to solve problems operationally, innovation has to help our customers. It’s an opportunity to really delight customers in ways that they don’t expect.

“To be able to take robotics and artificial intelligence and introduce it to the hotel business as a way of helping us operate more efficiently, and helping us to delight our customers, it’s a big dream.”

It has not yet been said if Connie clones will be popping up at other Hilton’s around the world, but it will be likely. The advantage for the hotel is that a robot concierge can free up regular staff from having to answer the same questions day in, day out, and consequently save costs.

Hilton isn’t the first hotel to have employed a robot. In 2014, Starwood unveiled two robotic “Botlrs” at its Aloft hotels in Cupertino, Silicon Valley and Miami South Beach. Created by US developer Savioke, the ALOs perform back of house duties such as delivering toothbrushes or towels to guests’ rooms. At the time, Brian McGuinness of Aloft hotels, said: “Based on the success of the pilot, we will look to roll out at our nearly 100 hotels around the world in 2015 and beyond.”

Meanwhile, Intercontinental Hotels Group has three-foot-tall Dash – he can call lifts using a wifi sensor and travel as fast as a human, and is installed in the Crowne Plaza hotel in Milpitas, California.

According to a poll by travel search engine Kayak at the end of last year, robot staff are something the public would like to see more of, with a fifth saying they are more trustworthy than people.

Over in Japan, the vision has become reality. The Henn-na hotel, which opened last year in Nagasaki, is entirely run by robots. According to motherboard.vice.com: “Walk into reception and a mechanised dinosaur will guide you through check-in; go to your room and a luggage bot will wheel your suitcase along beside you; get ready for bed and your own robot companion will turn out the lights.”

To read about the suitcase with a brain, click here.