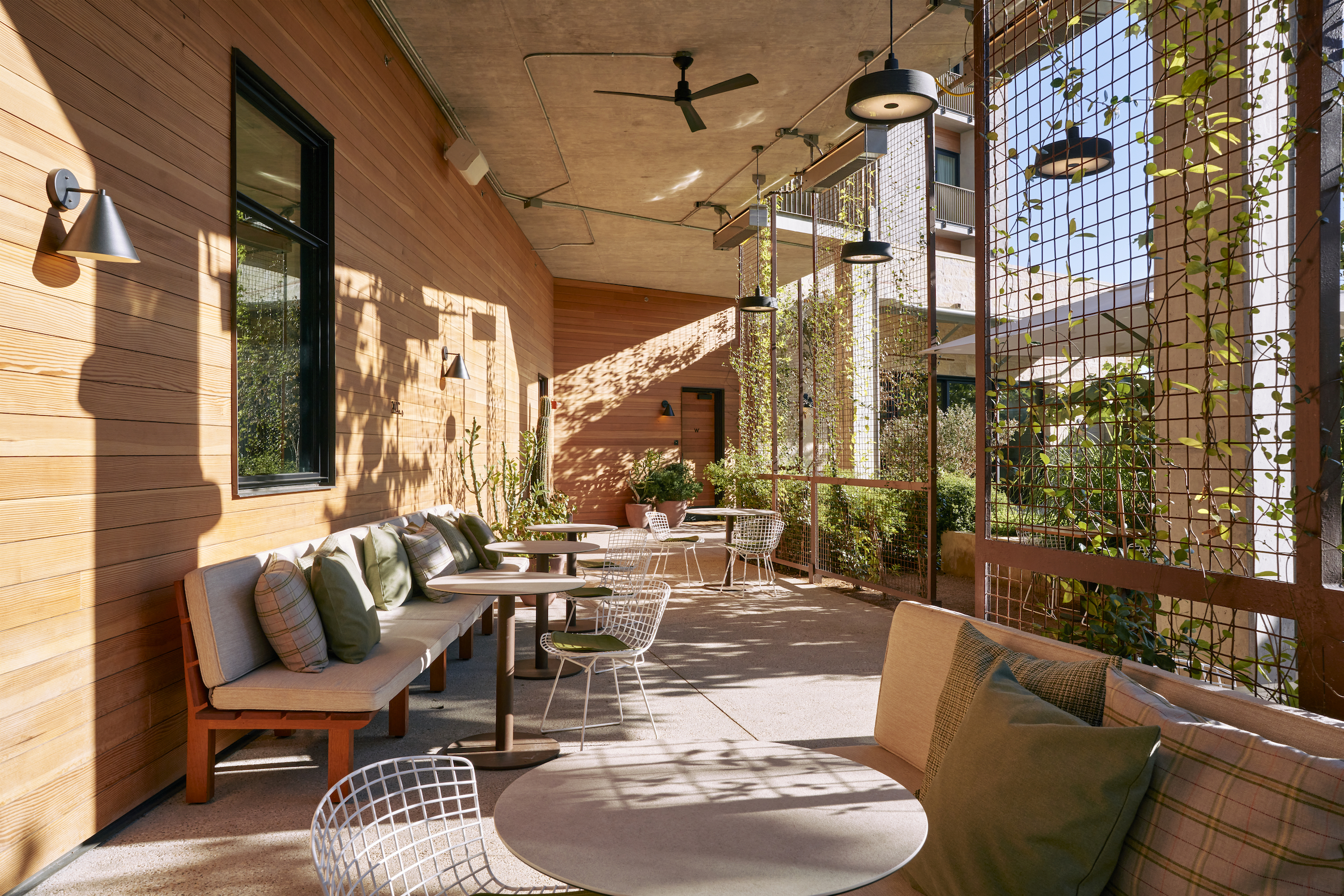 The first of its kind to be constructed in North America, Hotel Magdalena was designed in collaboration with architecture firm Lake | Flato and takes inspiration from the natural green space of Austin’s Barton Springs and early 1970s lakeside culture. 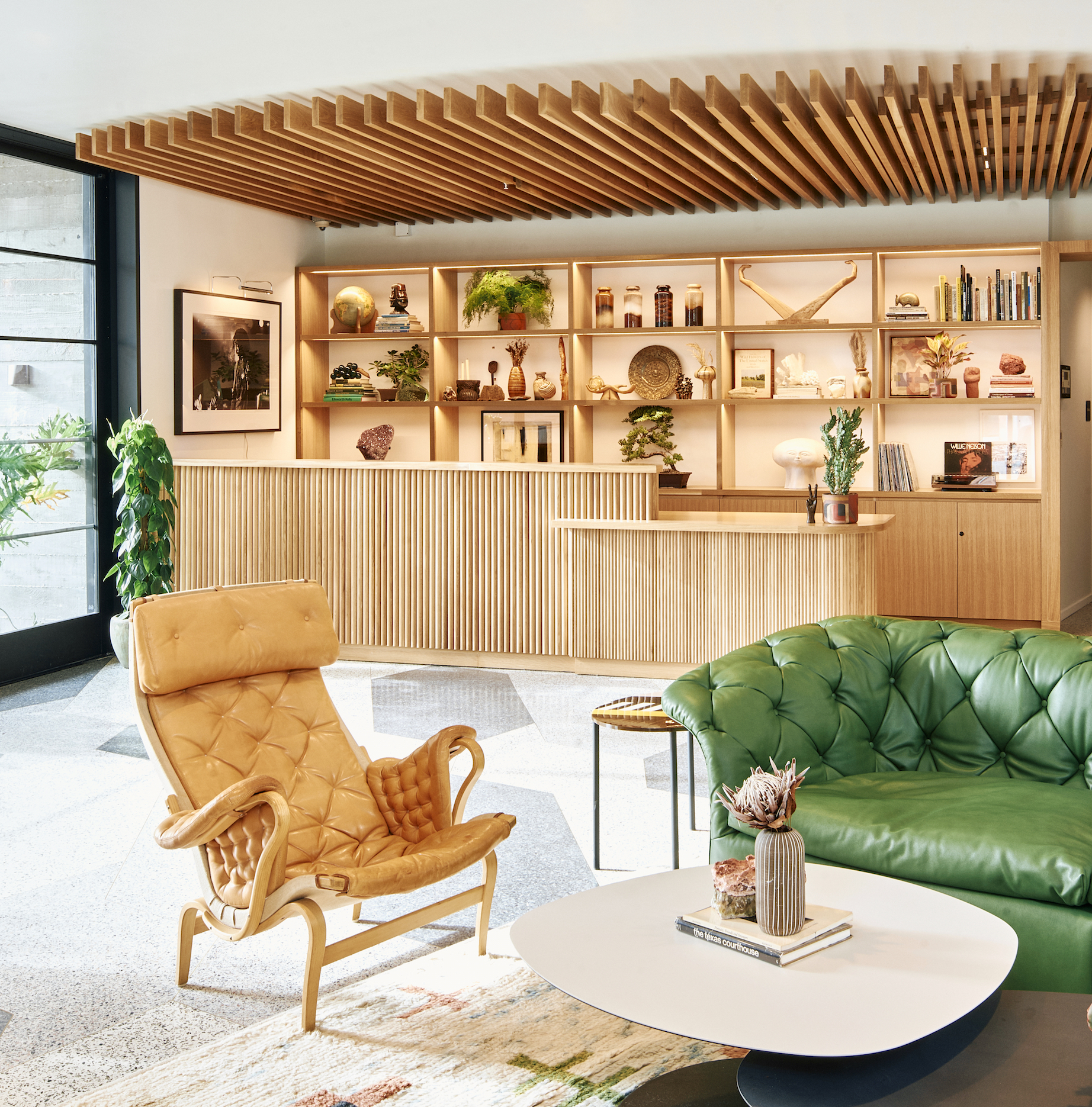 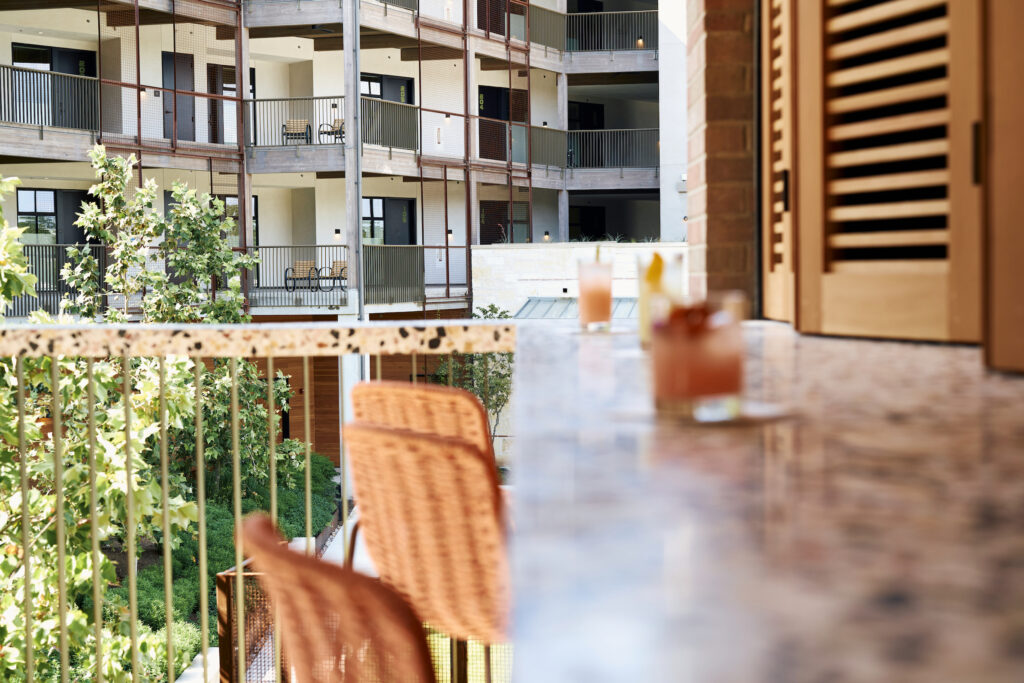 The hotel features four distinct buildings connected by exposed elevated walkways and courtyards to create a treehouse feel, with timber visible in the hotel room ceiling design and the exterior walkways.

Guest rooms feature windows at both ends, allowing for a cross breeze and natural light at sunrise and sunset, as well as poured concrete floors with exposed aggregate inspired by the river rocks of Texas. 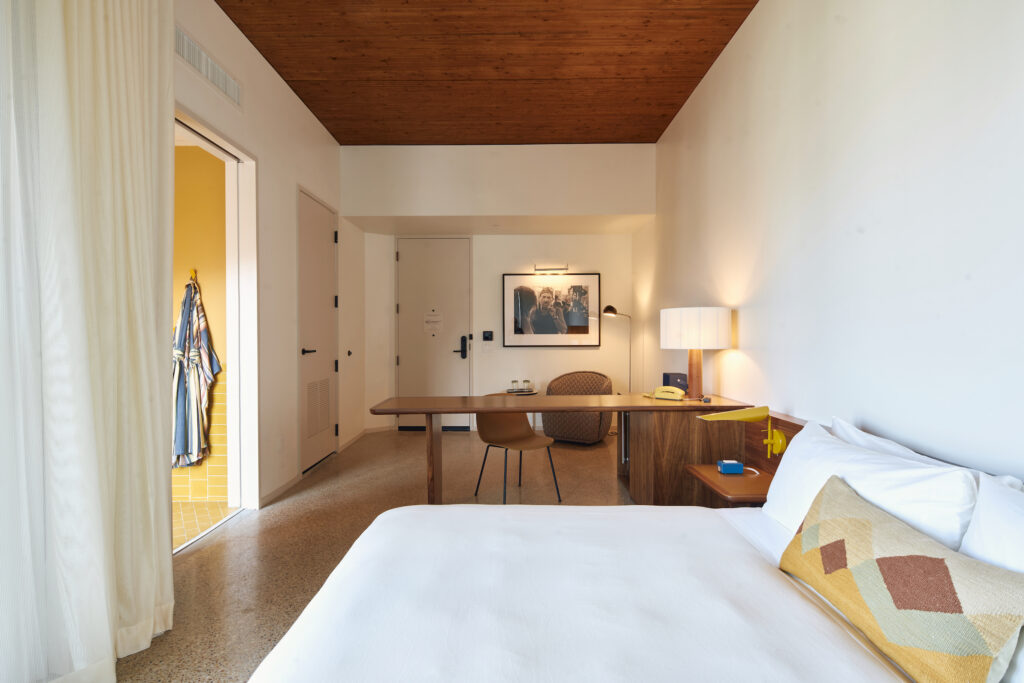 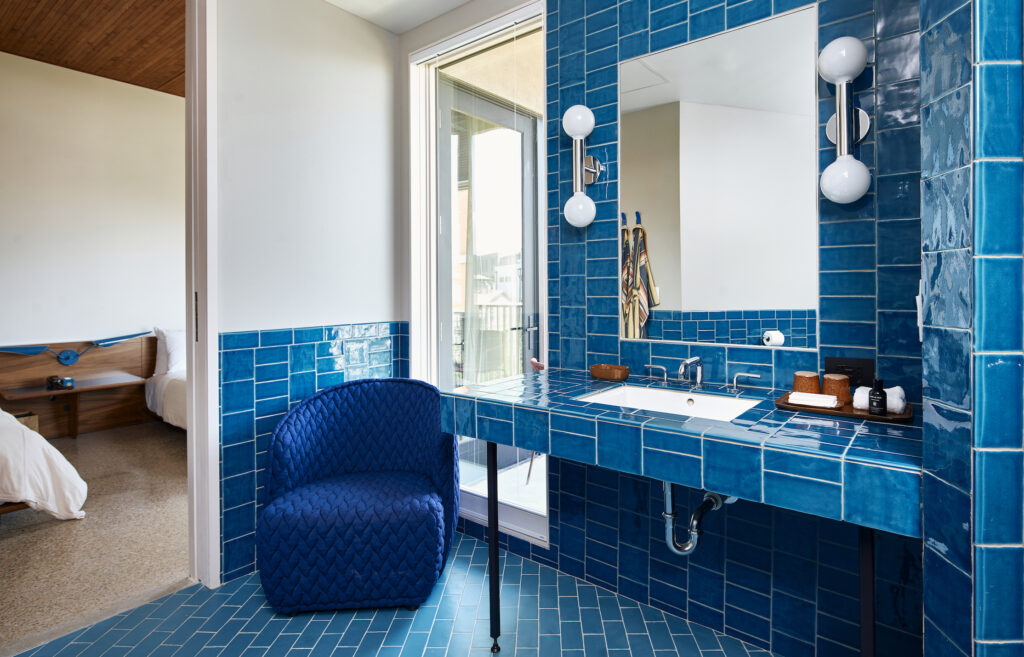 The hotel complex includes a guest-only, 900 sq ft pool with a terracotta and terrazzo-tiled bar and an event space.

A location with heritage, in the 50s and 60s this spot was home to the Terrace Motor Hotel and its ritzy Summer House, a poolside restaurant with musical acts – now the inspiration for Hotel Magdalena’s Summer House on Music Lane restaurant. 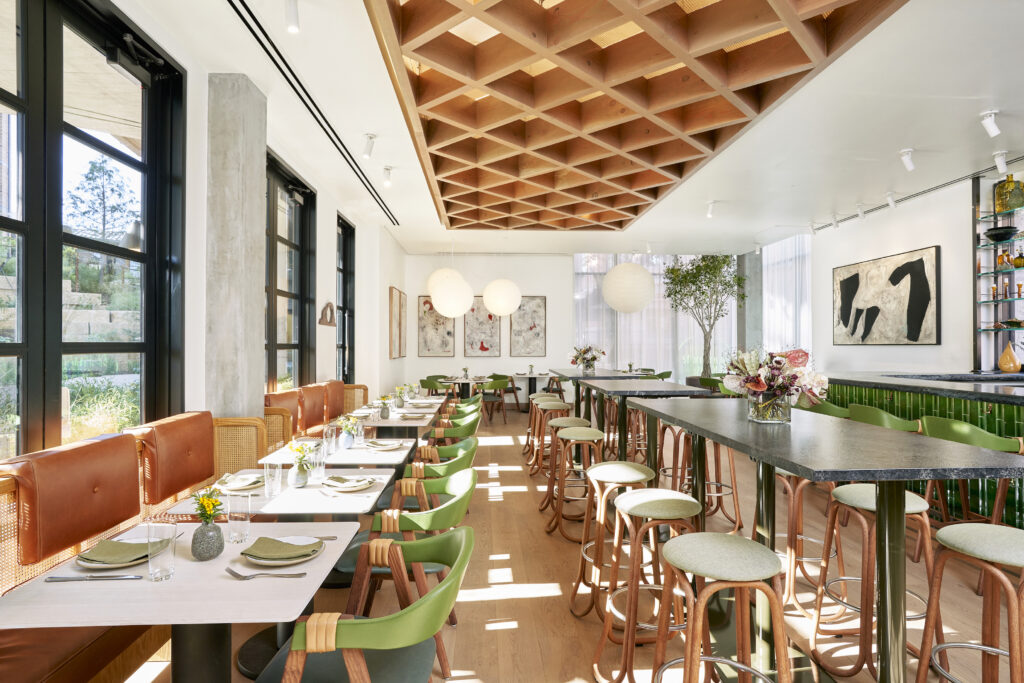 Executive Chef Jeffrey Hundelt (previously the Culinary Director for Launderette and Fresa’s Chicken al Carbon restaurants) has created a menu inspired by the “casual sophistication that defines a lake house weekend”, focusing on grilled local meats and seasonal vegetables with bold accompaniments and bright salads, all cooked in an open kitchen with a live-fire grill and rotisserie. 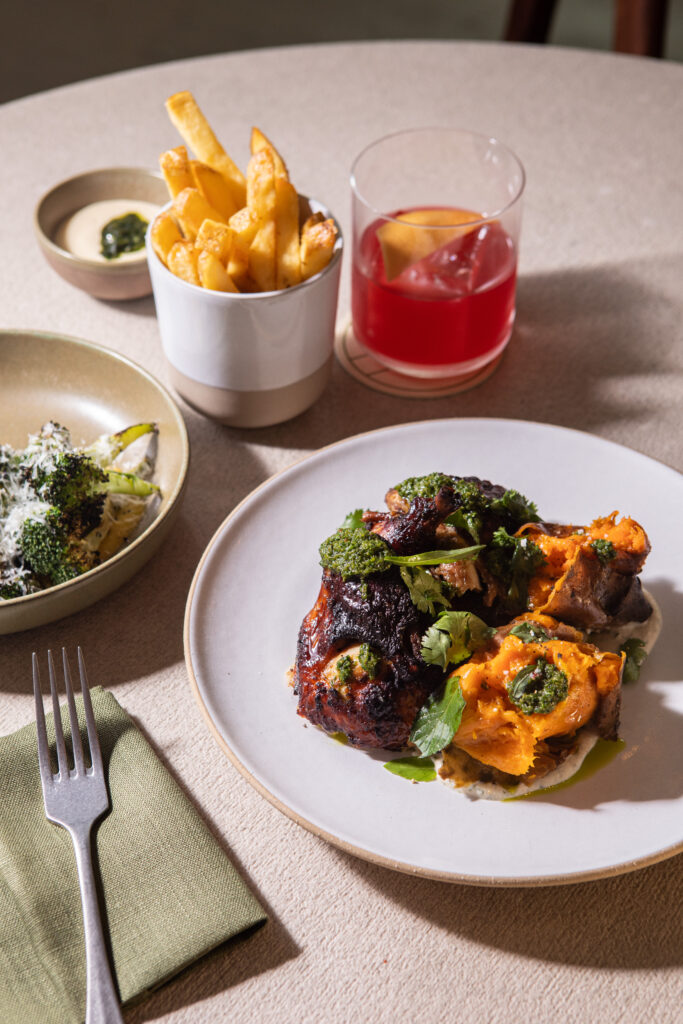 Expect sparkling varietals highlighted on the drinks list, including many organic and biodynamic producers, as well as a generous selection of wines. 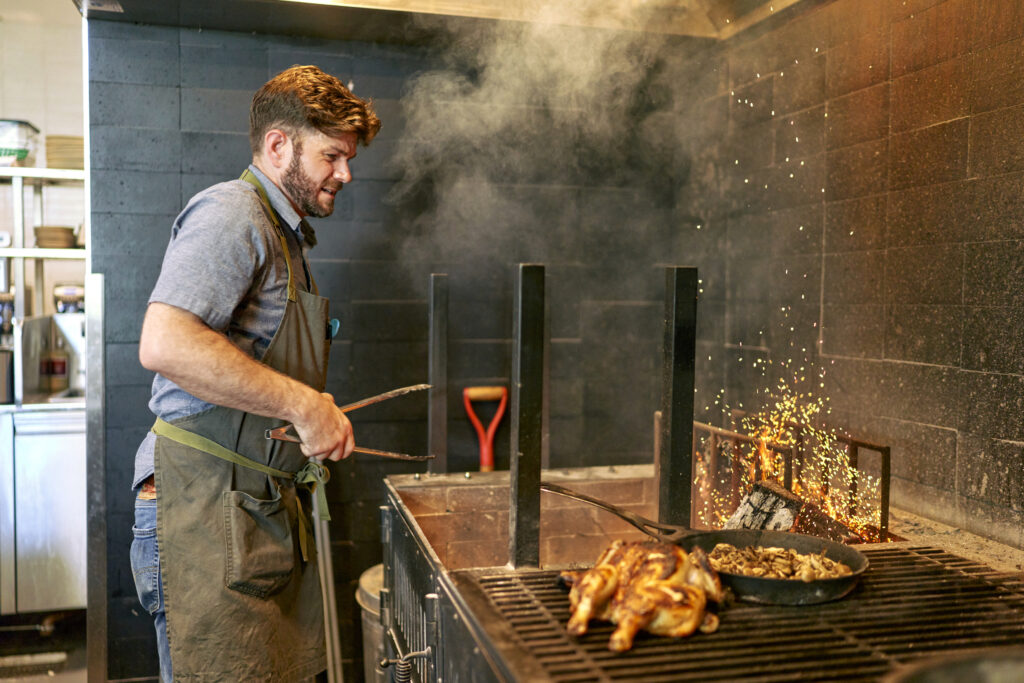 In keeping with Bunkhouse’s ethos of creating community-driven experiences, Hotel Magdalena celebrates the history of the place and the area’s culture through its programming, which will include live music, nature walks, and local partnerships.

Bunkhouse transformed the historic Austin Motel (it’s been welcoming guests since 1938) into a groovy neighbourhood go-to in 2017, with a redesign that honours the property’s mid-century roots with respect to modern sensitivities.

Designed by Bunkhouse founder Liz Lambert, the 41-room motel was given “a facelift that steers more into the realm of pop art and ’50s nostalgia than her Western-chic, haute-desert aesthetic at other locations like San Antonio’s Hotel Havana or Marfa’s El Cosmico,” according to lifestyle magazine Southern Living. 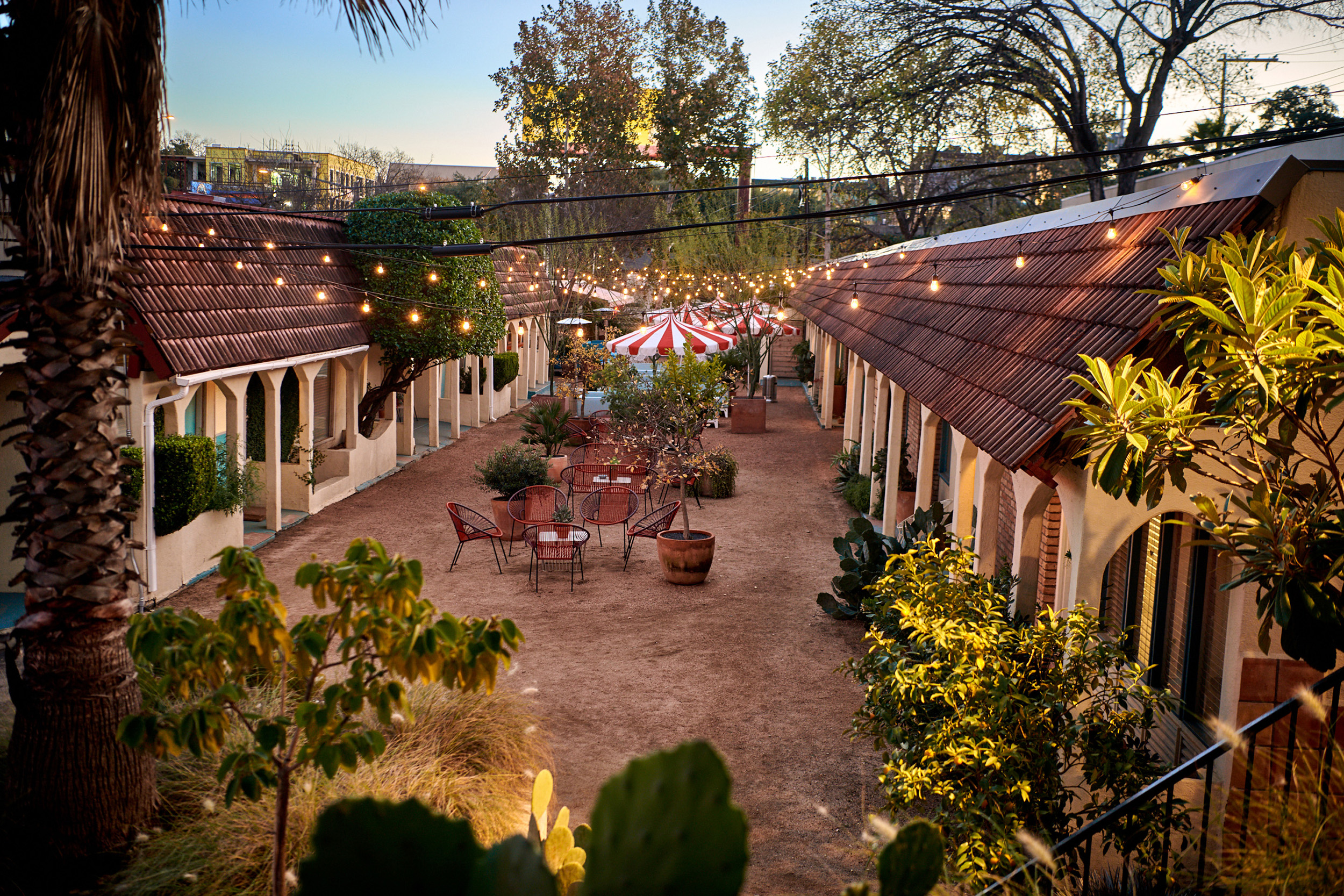 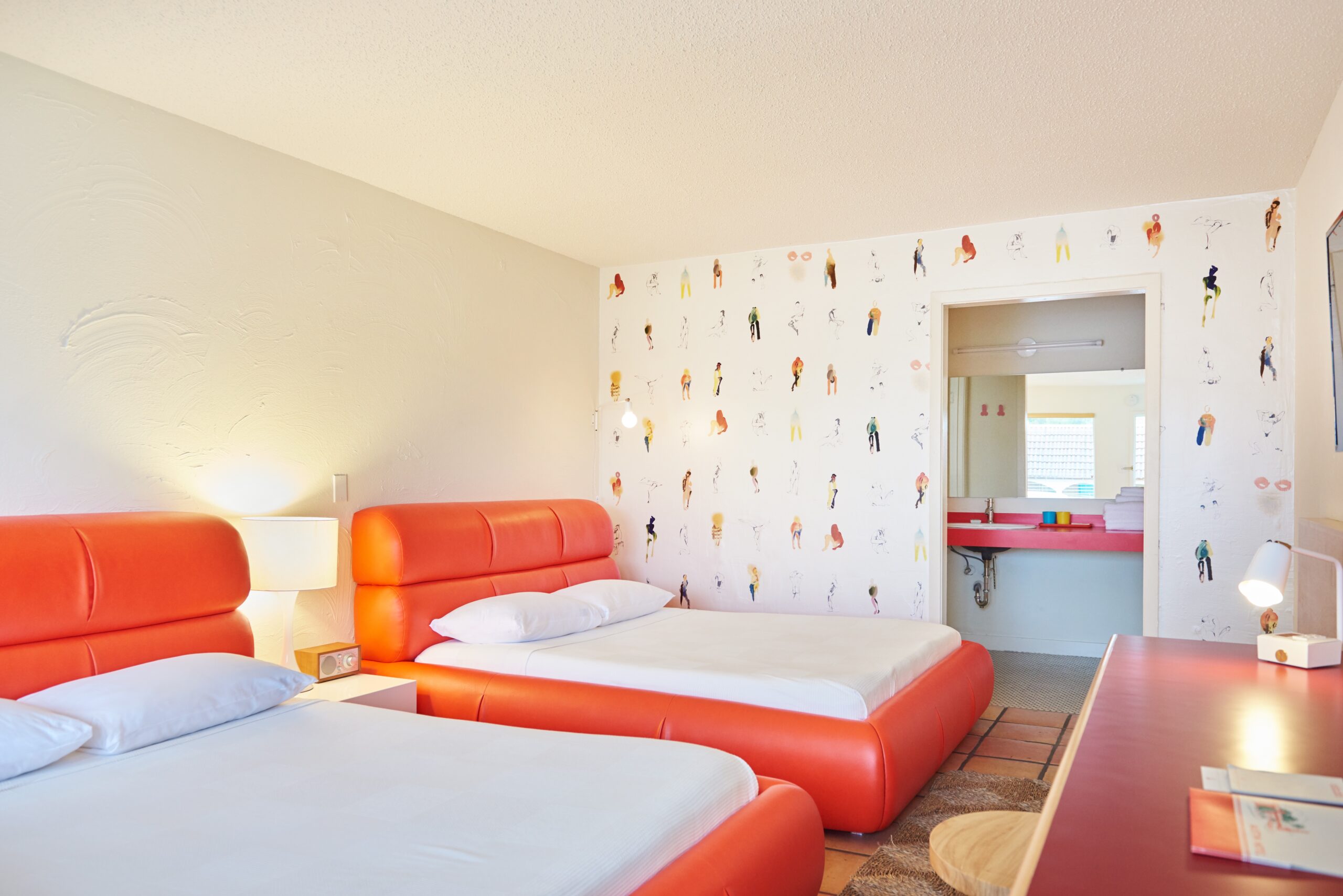 There’s free wifi, an on-site trailer serving burgers, plus “the best swimming pool in town” and an artist-designed pool bar. 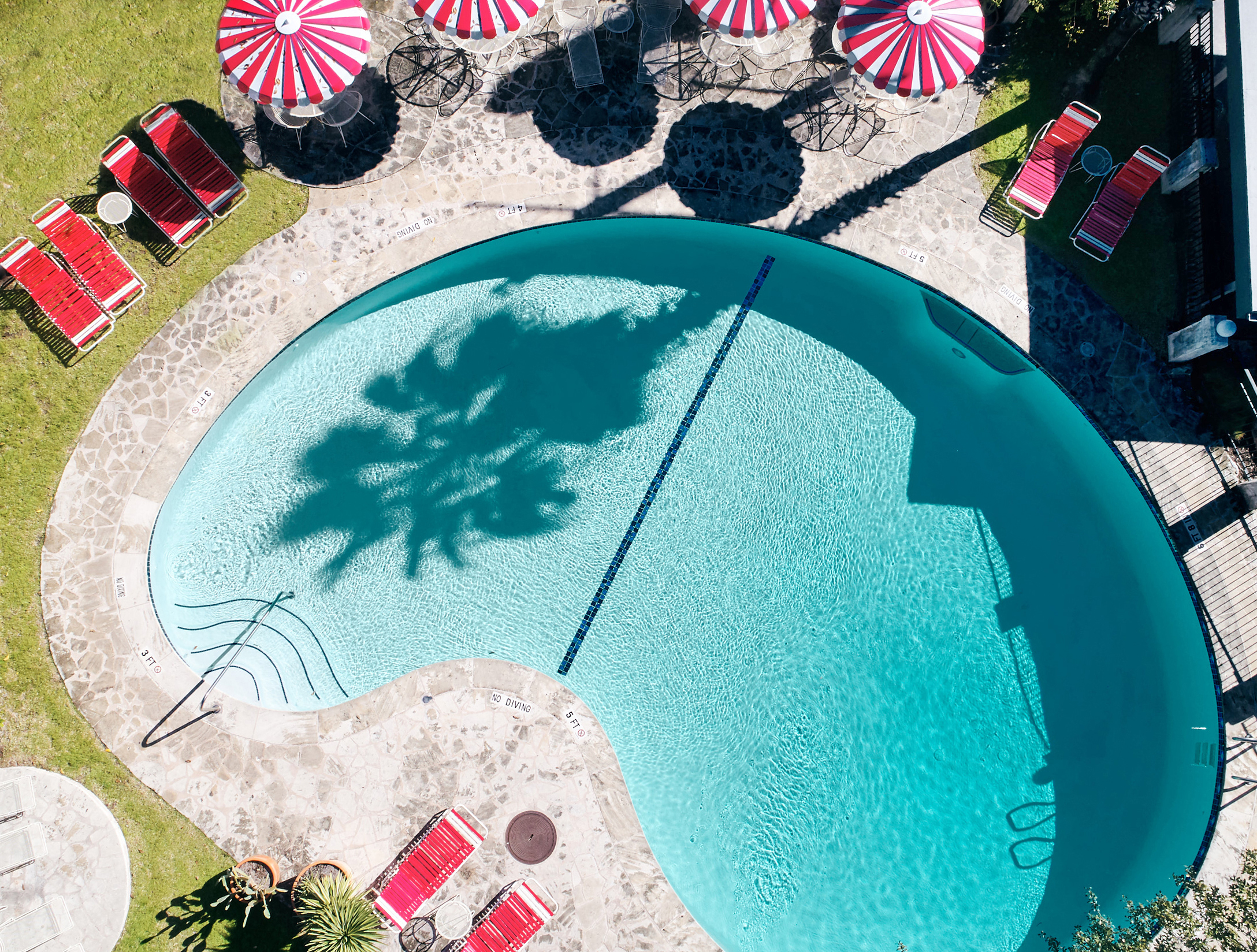 “We tried to keep the casual feel and the playful spirit that have made the hotel special without being kitschy or theme-y,” Lambert tells Garden and Gun of the redesign.

“Everything flowed from the sign and from the time periods [in the hotel’s history] that were meaningful to me – 1930s for molding and detail, 1950s for colour schemes, and 1980s for pop art. To be honest, we didn’t change all that much.”

At the lobby gift shop, dubbed the Bodega, guests can stock up on Texas classic beers – think Lone Star and Shiner – as well as mass-produced cult faves such as Mickey’s Fine Malt Liquor and Blue Ribbon.

A selection of hip gifts is on offer too, from retro bikinis and Lolita-esque sunglasses to candles, fragrance and Polaroid film (yup, it’s that kind of place). 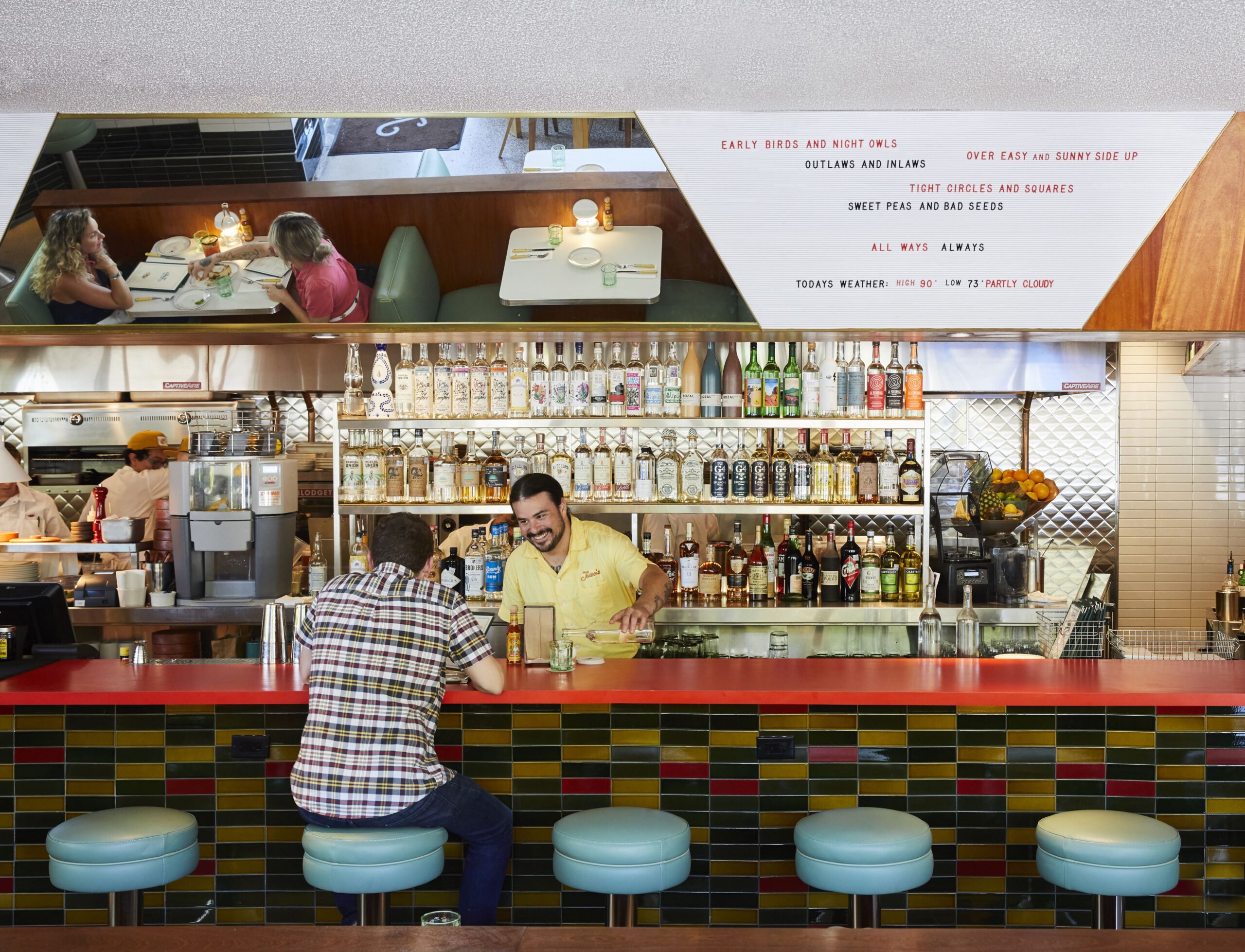 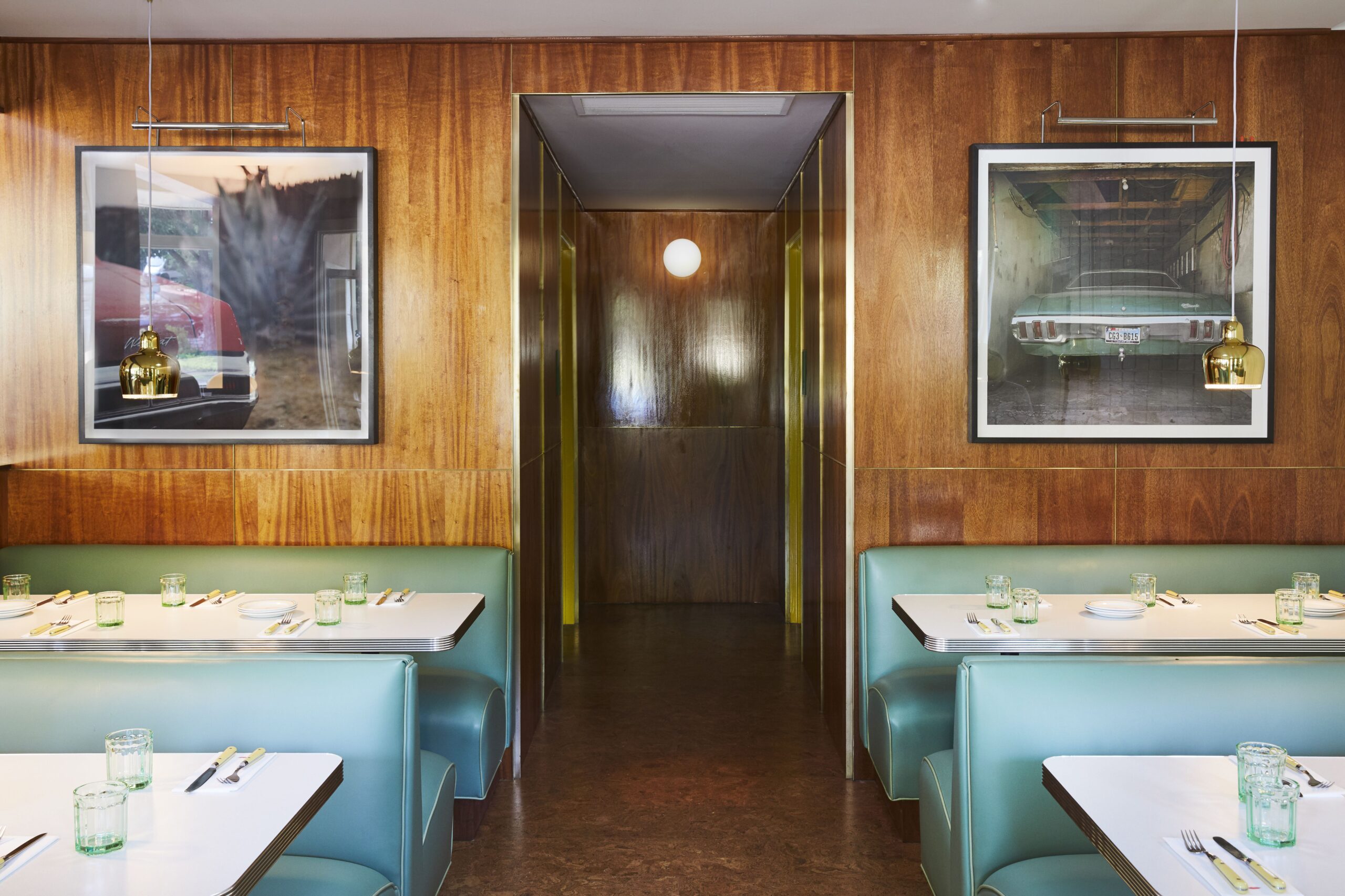 Guests wanting to explore the area are within walking distance of Austin’s famous Bat Bridge, and the motel has easy access to bus lines and a hike and bike trail that connects to Zilker Park, Barton Springs Pool and the Barton Creek greenbelt.

Globetrender editor and founder Jenny Southan spoke to The Telegraph about how US motels are making a comeback: “Motels were born in America but up until recently weren’t displaying much in the way of innovation. By their very nature, they were places people stayed in out of necessity rather than choice.

“However, over the last couple of years they have been undergoing a revival, with inflated prices and upgraded looks to appeal to the aesthetically minded millennial and Gen Z generations with an eye for 1950s nostalgia.

“In the viral age, travelling by car, motorbike or campervan is the most hygienic way of getting around. And as borders remain shut and travel restrictions make going abroad more difficult, exploring one’s own country will be continue to be the obvious (possibly only) option for a lot of people.”

However, she warns: “While ‘designer’ motels will certainly do well, and even become destinations in themselves over the coming years, the stereotypically grubby motel that litters every American highway will gradually die a lonely death as even Covid-fearful truckers shun them for health reasons.

“In many ways, the pandemic will inadvertently raise standards across the industry and travellers will reap the benefits.”

Hyatt hotels in America are renting rooms as day-use offices