The global edible insect industry is booming. Rising awareness about the nutritional benefits of eating insects is contributing to a projected 47 per cent annual market growth, which is expected to surpass US$1.5 billion by 2026.

In Bangkok, startup Exofood plans to capitalise on this trend with the opening of their insect shop and laboratory.

The company, co-founded by Athivach Pongsattasin and Chonticha Sujitalom, is still in its infancy, working on producing food grade insects for consumption. Their first target market is exotic pet owners, seeking specific and high-quality feed from a reliable source.

The lab’s ultimate goal, however, is to create insect-inspired cuisine for humans, for sale at the adjoining store. 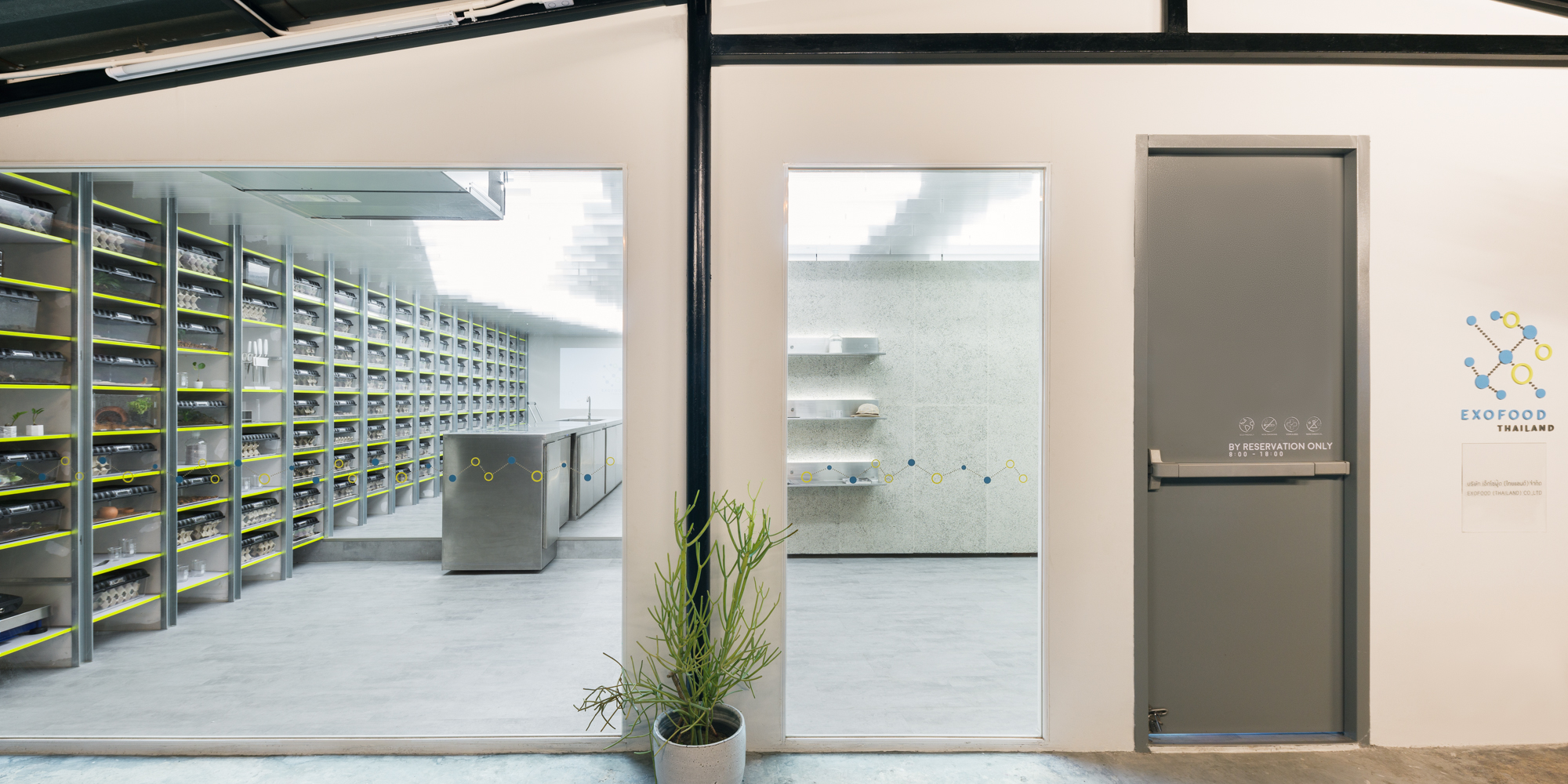 Exofood enlisted interior architects Space + Craft to design their multi-purpose space, located in Phasi Charoen, a residential downtown area of Bangkok. Although eating insects such as crickets is common in countries such as Thailand, this will be the first time they have been sold in a hyper-modern, trendy retail lab rather than at street stalls. 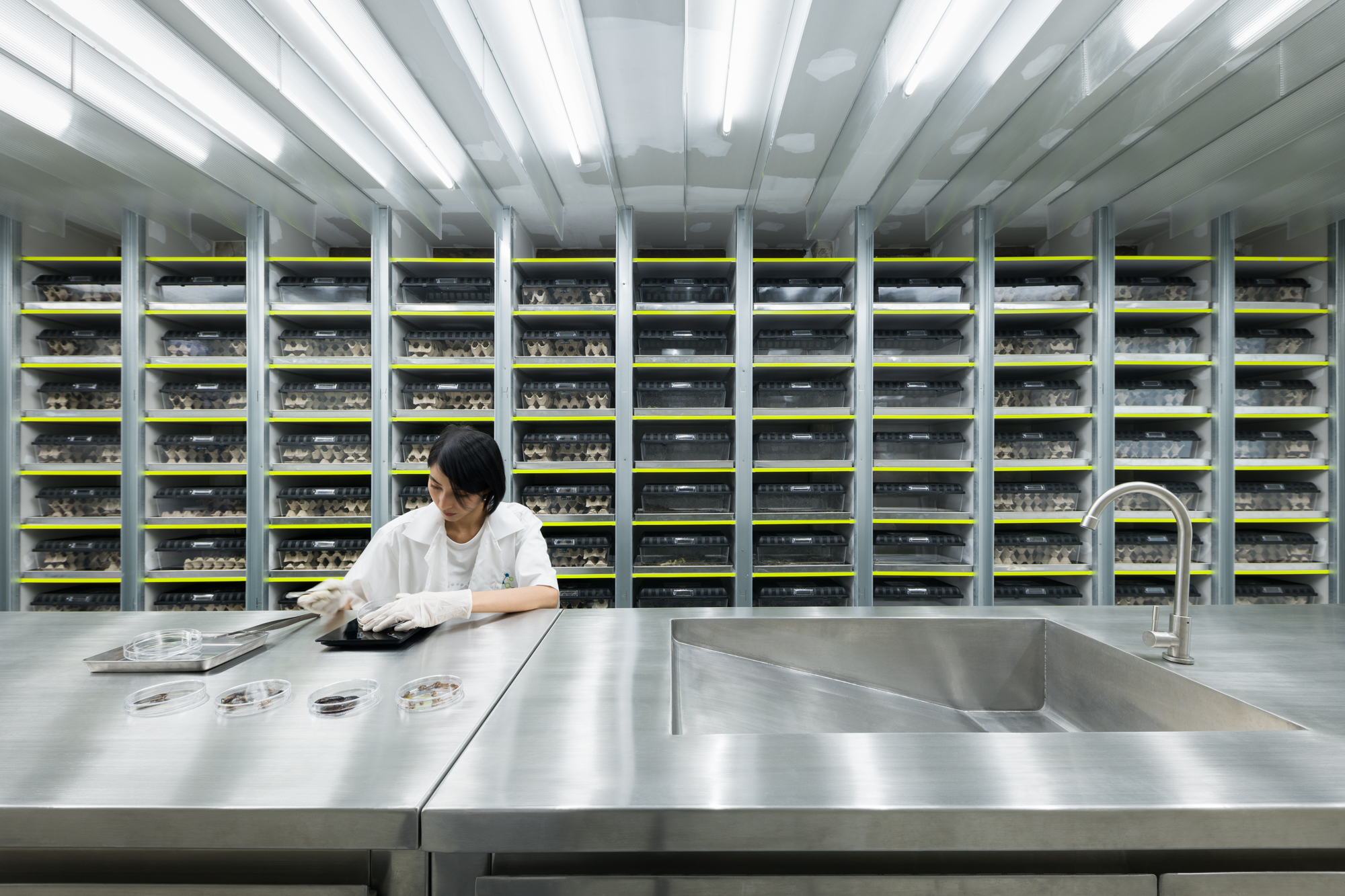 On one side, vertical shelving units are stacked with boxes of insects, making best use of limited space in the busy city. Dividing columns are constructed from simple zinc frames, with neon yellow strips of colour accentuating each compartment. 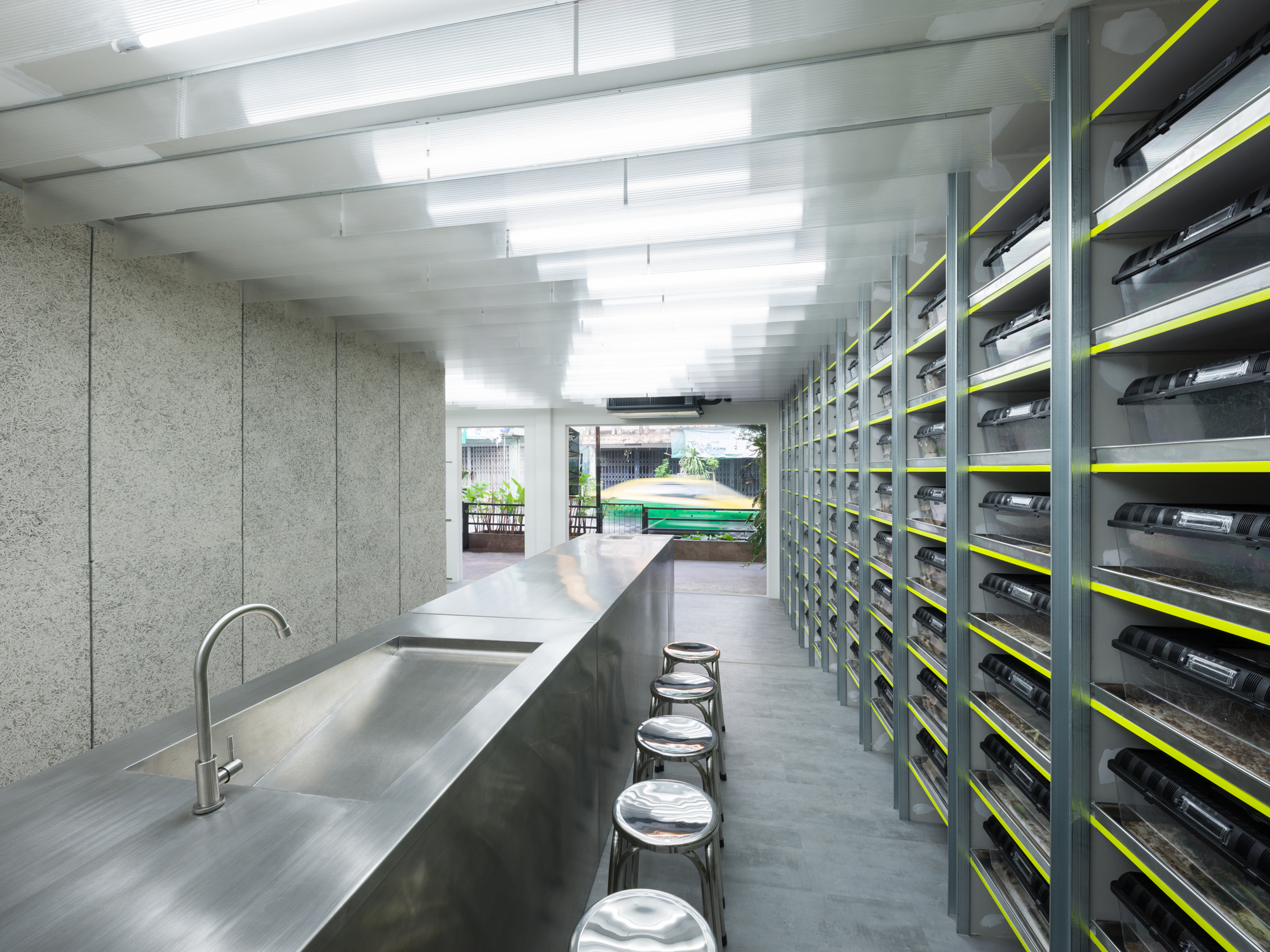 Fluorescent lights, shielded behind rows of polycarbonate panels, line the ceiling in an irregular formation, giving the space a futuristic vibe. An understated, industrial aesthetic throughout enhances the image of cleanliness and order, while staff closely monitor hygiene standards and temperature. 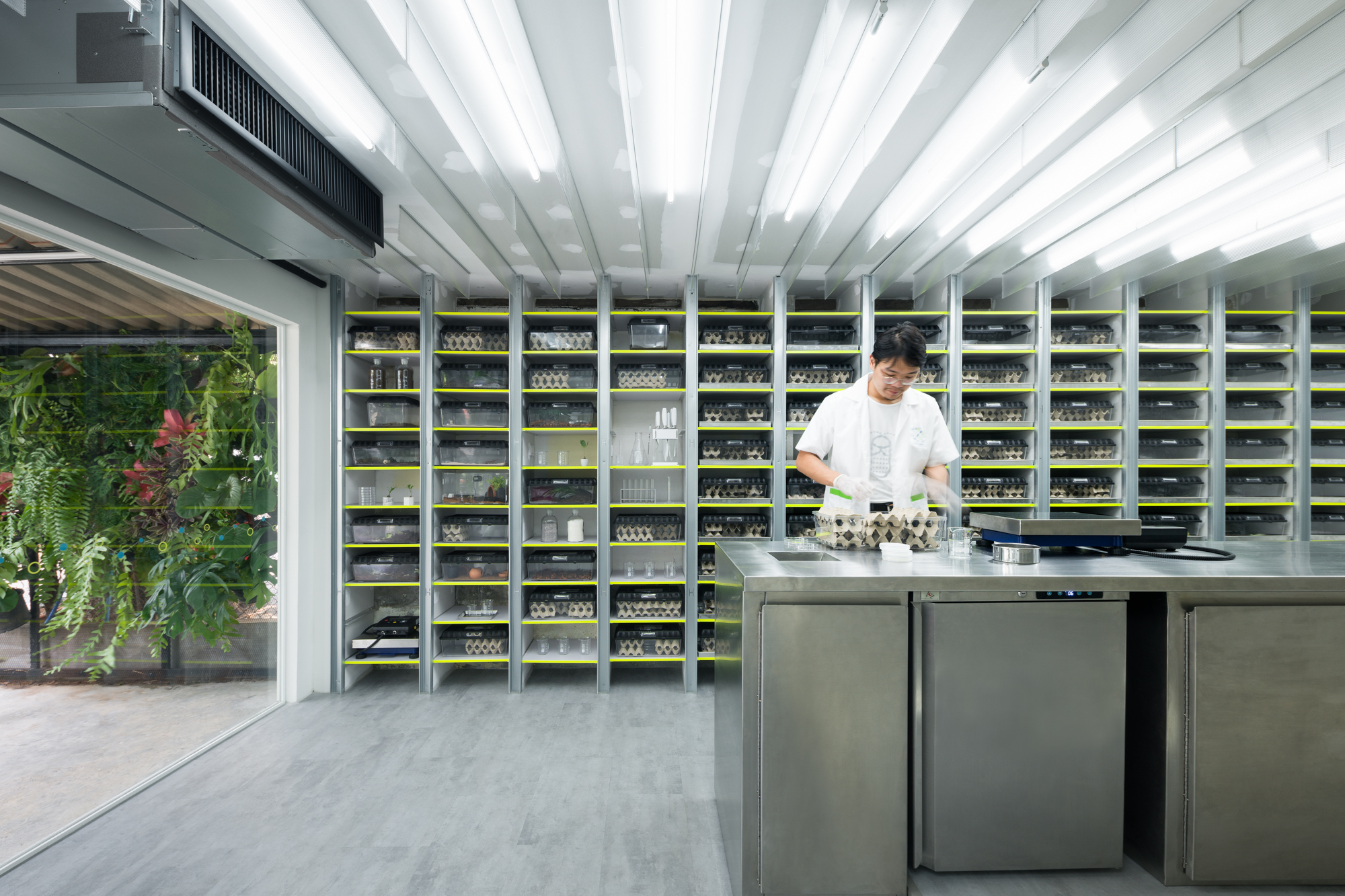 Laboratory visitors will be permitted, provided that they wash their hands and wear sanitary shoes, provided by Exofood. By observing the scientific process and learning more about the nutritional benefits of insects, Exofood hopes to entice customers to its business. 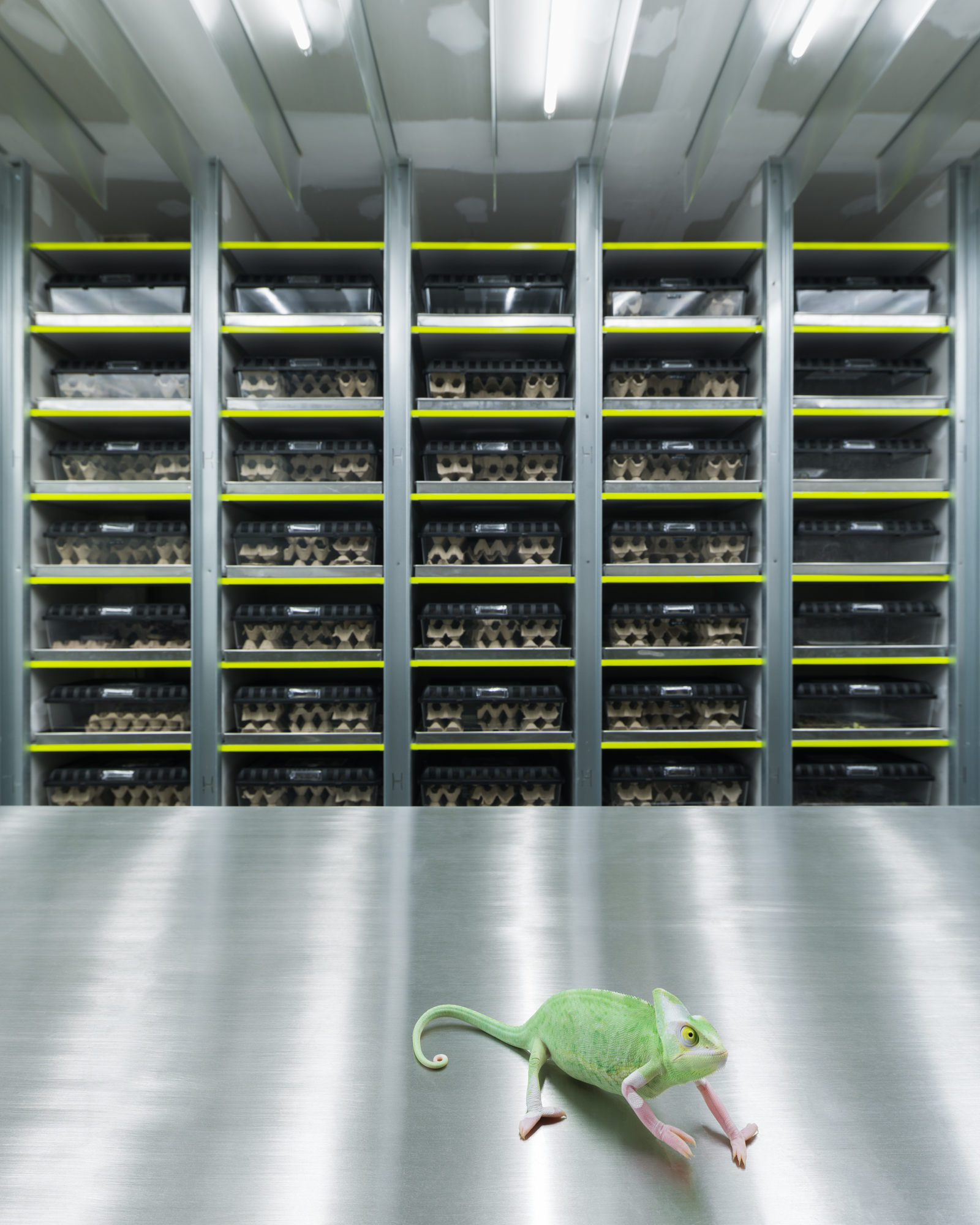 Eating insects, or entomophagy, is not a new concept to many Thai people, where an estimated 150 different species, mostly wild-harvested, are consumed. Across Asia, Africa, and parts of South and Central America, insects are widely enjoyed as a source of protein and micronutrients.

A single grasshopper provides up to 28g of protein, 60 per cent of the recommended adult daily allowance. In fact, the protein content of crickets is two to three times higher than that of beef, and also contains significantly higher quantities of amino acids, dietary fibers, potassium, omega-3, and omega-6.

Crickets, beetles and caterpillars are all great sources of nutrients, also, with red ants offering an especially high dose of iron.

Beyond their human benefits, edible insect production is a sustainable solution to feeding the world’s growing population. Insects require less feed, water, land, and energy than other protein-rich livestock options, and are easier to transport.

Only 200g of food is required to produce 100g of crickets, compared with 2.4kg of fodder to generate 100g of beef. What’s more, insects reproduce quickly, and have 80 per cent edible parts, compared to only 40 per cent in mainstream meat sources.

These benefits are particularly appealing in light of Covid-19, when interruptions to the global food supply chain caused food shortages.

“Food waste can be easily reduced by the help of our little friends. We have been working on how to effectively extract organic protein that can help cut down food waste while protecting the environment.”