Hotel Zena in Washington DC sets out to promote female empowerment with pastel decor, bespoke murals and art made of tampons. Is it victorious or patronising? Olivia Palamountain reports

Part of Viceroy Hotels and Resorts, Hotel Zena opened at the beginning of October. Conceived by Dawson Design Associates (DDA), not only is it a place to stay but a cultural hub that sets out to celebrate the accomplishments of women and recognises their enduring struggle for gender equality.

Situated in Downtown Washington DC, in the Logan Circle neighbourhood, the 191-room hotel features suites decorated in soft, warm hues, each with a translucent portrait of the Greek goddess Artemis and curved achitectural motifs. 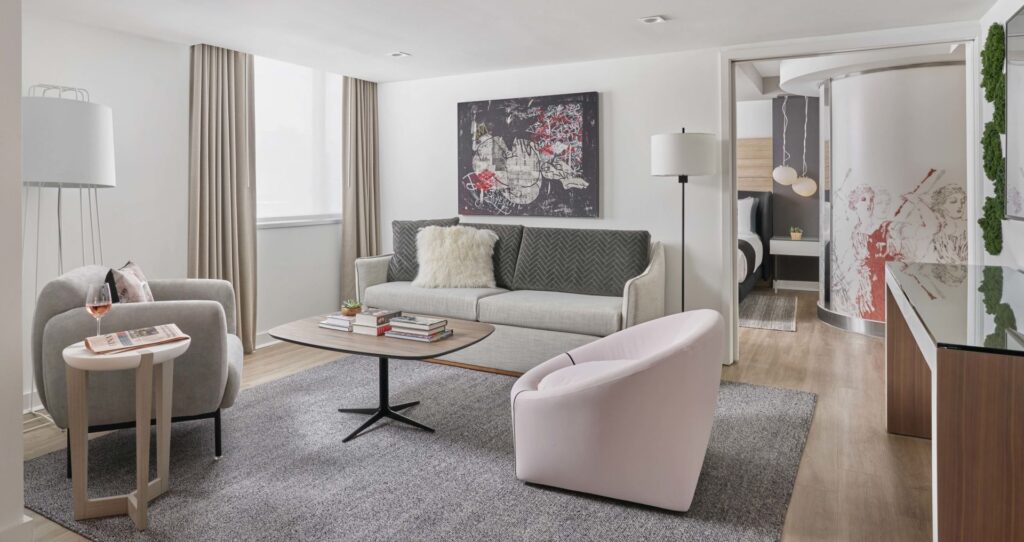 The lobby is dominated by a portrait of the late, honorable Justice Ruth Bader Ginsburg, who died in September but spent much of her life working for women’s rights and equality.

Produced by Julie Coyle Studios, it is made from 20,000 hand-painted tampons. Even though Ginsburg was known for having a good sense of humour, no doubt it will be divisive. 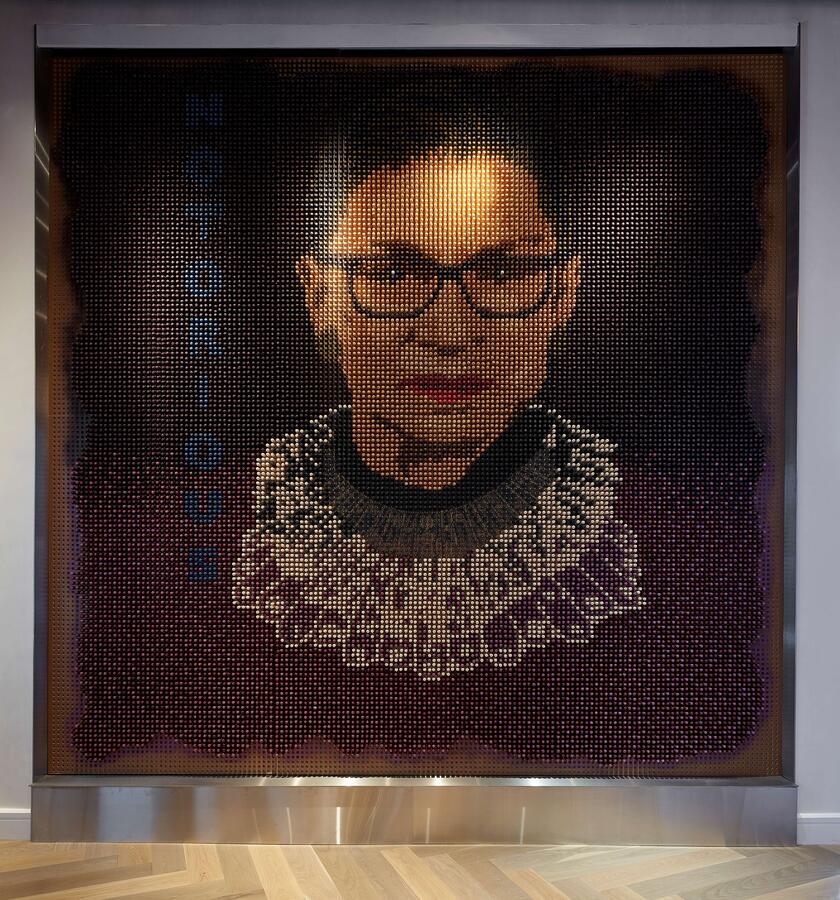 Meanwhile, a rooftop lounge and pool – “Hedy’s Rooftop” – is scheduled to open in spring 2021, serving cocktails, mocktails and light food from private cabanas painted by artist Rose Jaffe, including her Dancing Druids mural celebrating the rights of fertility and spring.

Not everyone is impressed though. Arwa Mahdawi writes in The Guardian: “The whole thing feels like it was conjured up by Ivanka Trump in a fever dream – although the patron saint of fluffy feminism, I should clarify, has nothing to do with this particular endeavour.

“Hotel highlights include pink pool tables, a US$16 cocktail called the Empowermint and 60 pieces of art, that, as the press release boasts, were created by ‘feminists of both genders’.”

The Figleaf bar and restaurant from executive chef David Sears serves sharing plates made from locally-sourced ingredients. However, as Mahdawi points out: “Considering female leaders are hugely unrepresented in the restaurant world, you would have thought it would be a no-brainer to hire a female chef.”

Hotel Zena is not the first feminist hospitality space to open in recent years. International female-only members clubs The Wing and London-based AllBright have both garnered attention for their business models, and in some cases, criticism.

The Wing was launched in 2016 by Audrey Gelman, the actor/writer Lena Dunham’s best friend who used to work for Hillary Clinton. She set up The Wing in the wake of Trump’s 2016 election as an antidote to the president’s politics and old boys’ networks, reports The Evening Standard.

Gelman wanted the co-working space to be a “utopia” for “women of all definitions”, with a library just for women’s books and regular talks from female role-models. In the US, speakers included Jennifer Lopez and Alexandria Ocasio-Cortez.

Less than a year after it opened in London, claims of misgendering and racism at the club saw women in London and the US cancelling their memberships.

This major fall from grace is a case in point as to how feminist values can be distorted by people in power. Does Hotel Zena live up to its messaging behind the scenes? Or could it, too, be accused of appropriation?

Globetrender requested a comment from Hotel Zena – this was their response:

Does the hotel have any rules about equal pay for both genders?

Hotel Zena is inclusive of all genders, races, and sexualities. Men and women are equally as important in supporting female empowerment, diversity and equality messages.

What is the ratio of men to women working at Hotel Zena?

Hotel Zena is committed to having a diverse and inclusive team for all hotel positions and is proud to have opened the hotel today despite the enormous challenges the hospitality industry is facing.

The opening team is strong and pushing to develop Hotel Zena’s message of diversity, equality and equity. While the full staff is not yet on board, the hotel will continue to add to the team over the coming months and will announce key positions as filled, including the general manager position.

What is the ratio of women to men in leadership positions?

Eight of 11 management positions are currently filled by female colleagues.

Are there any acceleration programs in place to support female employees?

Hotel Zena celebrates the accomplishments of women. From recognising a diverse staff, to showcasing works by both local and international female artists, along with sourcing spirits for our cocktail program from female-led companies, it is Hotel Zena’s goal to consistently shine a light on women.

The hotel celebrates diverse talent and the opening team will lead the way to continue developing Hotel Zena’s message, programs and partnerships focused on equality for all.

It’s fair to say that Hotel Zena is trying to honour its core values, an ethos that Globetrender hopes will continue to flourish as the hotel moves through its infancy and into an established brand.

While Hotel Zena is not for female use exclusively, hotels across India and the Middle East feature women-only spaces as standard for cultural and religious reasons.

ITC Hotels were the first to introduce “Eva Rooms” which are exclusively for women. They have dedicated floors/wings for single lady guests available at all ITC super-premium luxury hotels in India.

Women-only hotels can also be found in Saudi Arabia at Luthan Hotel and Spa, the first of its kind in the Middle East; in Bali at Bliss Sanctuary for Women; and in Zurich at Josephine’s Guesthouse. Finland even has an island for women only, called Supershe.

More than just a space about women, Hotel Zena claims it is also “a celebration of people who work together to achieve fundamental civil rights, in a warm, dynamic, and inviting hotel with comfortable spaces featuring artwork commissioned to create a message of struggle, empowerment and hope”.

Such a worthy manifesto can be hard to swallow without confirmation as to how the machine really operates behind the scenes. Minority-only hotels and guesthouses are already in operation – think exclusively gay properties – could we see other minorities catered to exclusively in the future?

There has been speculation that the hotel industry does not cater to its customers of colour in a number of ways, from body lotions and hair dryers to shampoos and shower caps. More information can be found via social media with the hashtag #TravelingWhileBlack.

Would it be appropriate – or is it necessary – to create hotels for people of colour only?

In 2018, singer Halsey called out the hotel industry for using shampoos and conditioners that she believes only work for white people. She tweeted: “I’ve been traveling for years now and it’s been so frustrating that the hotel toiletry industry entirely alienates people of color. I can’t use this perfumed watered down white people shampoo. Neither can 50% of ur customers. Annoying.”

Back at Hotel Zena…

Jon Bortz, CEO of real-estate investment trust Pebblebrook Hotel Trust, which is the largest owner of urban and resort lifestyle hotels in the US (including Hotel Zena), says: “We created a safe gathering space that celebrates diversity, respects different points of view, and opens the floor to topics worthy of meaningful conversation. We know we’re pushing boundaries and might even make some people uncomfortable – and we’re okay with that.” 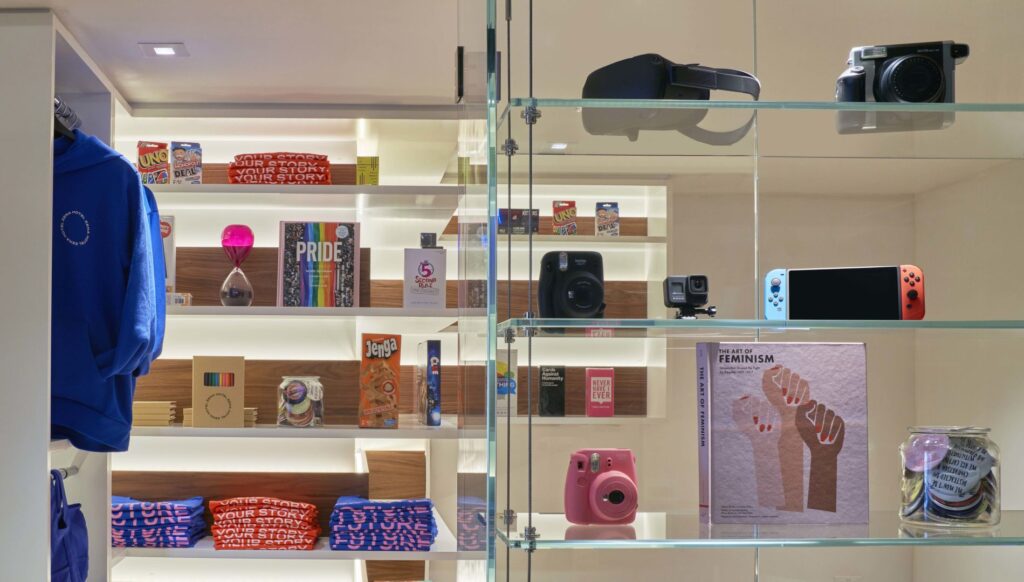 Andrea Sheehan, DDA’s founding principle and art director, says: “I have been working hand-in-hand with Jon Bortz and Pebblebrook Hotels over the past 20 years experimenting in creating powerful and interactive hotels, including Pebblebrook’s ‘Unofficial Z Collection’.” (Other properies include the Hotel Zags Portland and Hotel Zelos San Francisco.)

Sheehan says: “This is our ‘Female Z’, and the first Z Hotel on the East Coast. We wanted to make it a powerful statement. Given its strategic location and our society’s current state, it just made sense to us to take a public stand central to its creation. We both believe in the power that art can play in bringing people together.” 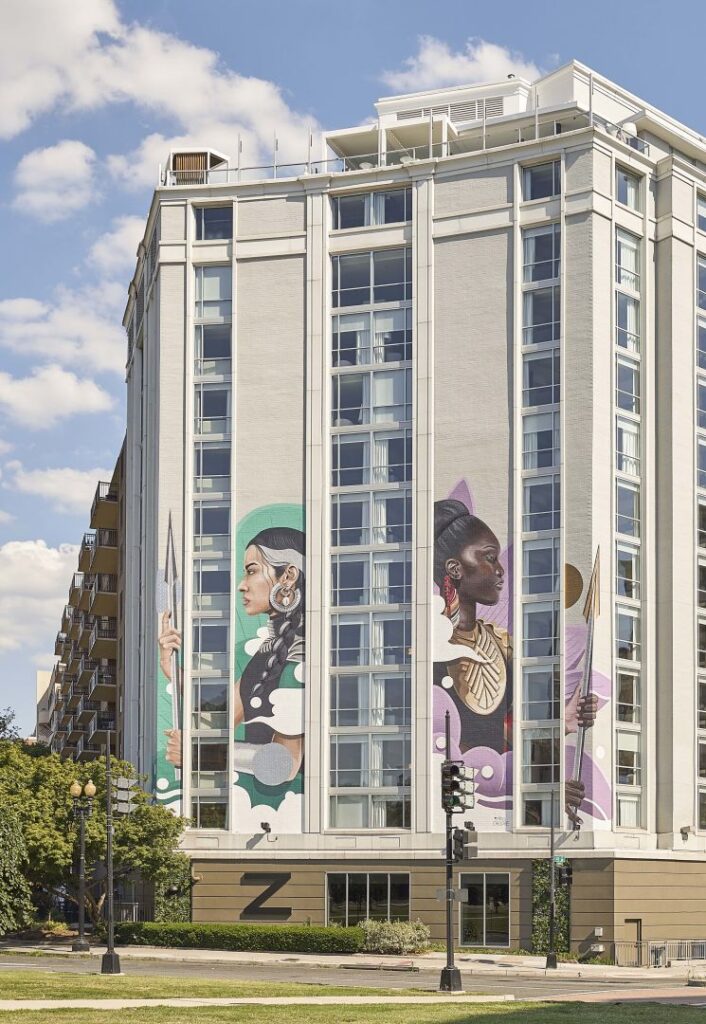 Provocative art and design are at the core of Hotel Zena. Guests are immersed in more than 60 pieces of bespoke art by a group of artists working globally for the cause of human rights. All the pieces are original and painted, photographed, sculpted and stitched by feminists of both genders with powerful stories to share.

Another installation – a curving wall layered with 8,000 protest buttons representing generations of marches and events promoting the feminist movement – pays tribute to America’s 100th anniversary of women’s right to vote.

“Hotel Zena was created primarily by women, for people, both women and men. It is a hotel that offers a haven for all genders, races, and sexualities; where an atmosphere of strength and femininity live in harmony,” says Bill Walshe, CEO of Viceroy Hotels and Resorts.

“As our second hotel to open in Washington DC this year, following the debut of Viceroy Washington DC, we are looking beyond the power and politics of the city to better position our nation’s capital as a hub for culture, unity, and empowerment.”