Marriott Hotels has launched the M Beta at Charlotte Marriott City Center, an ideas lab and interactive showroom that the functions as the world’s first hotel in “live beta”.

According to parent company Marriott International, which is now the biggest hotel company in the world since its 2016 merger with Starwood, guests will be invited to give constant feedback on prototype features ranging from keyless room entry to “personal greeters” instead of a conventional staffed reception desk.

Marriott says that “physical Beta Buttons are located throughout the hotel to gauge consumer feedback with a live-tally.” By tapping one, visitors can share their approval for the corresponding innovation. Votes are then aggregated and displayed in real-time on digital Beta Boards, as well as on travelbrilliantly.com.

Mike Dearing, managing director for Marriott Hotels, says: “As the leader in the premium full-service category, Marriott Hotels is transforming the traditional hotel experience. We are inviting guests to be part of the innovation and decision making. M Beta at Charlotte Marriott City Center is a forward-looking testing ground for exciting new concepts as we constantly evolve and challenge our way of thinking.” 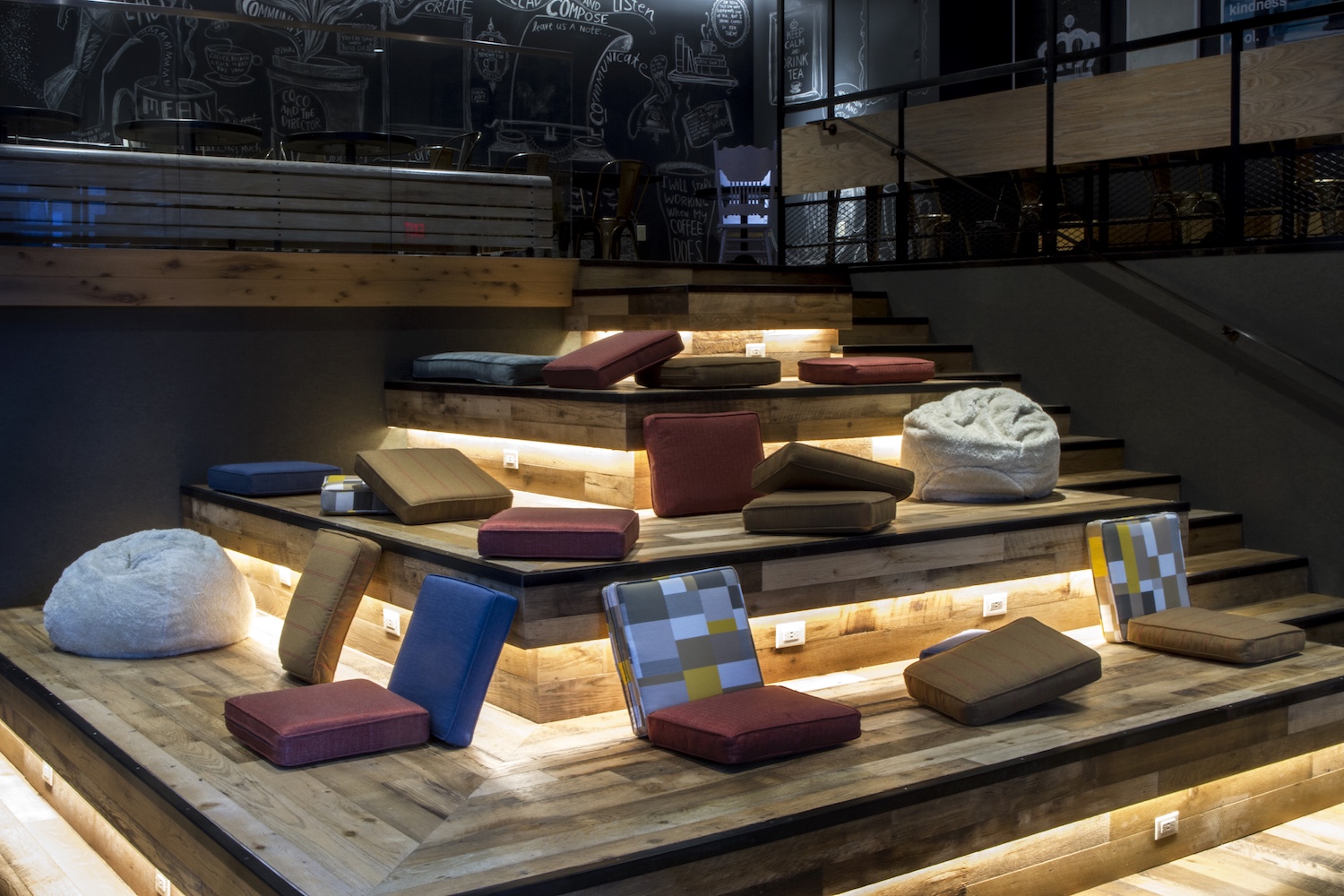 Another innovation the hotel company is experimenting with is Flex Fitness, whereby guests can access 1,000 virtual group and personal workouts directly on the screens at the gym or in-room. You can also use the platform to book local fitness classes, or view running and cycling routes.

In addition, the M Beta features the “LG Studio in Dynamic Meeting Space”, a partnership between Marriott Hotels and LG Studio. Here, instead of a conventional blank meeting room, this venue is installed with an LG kitchen. 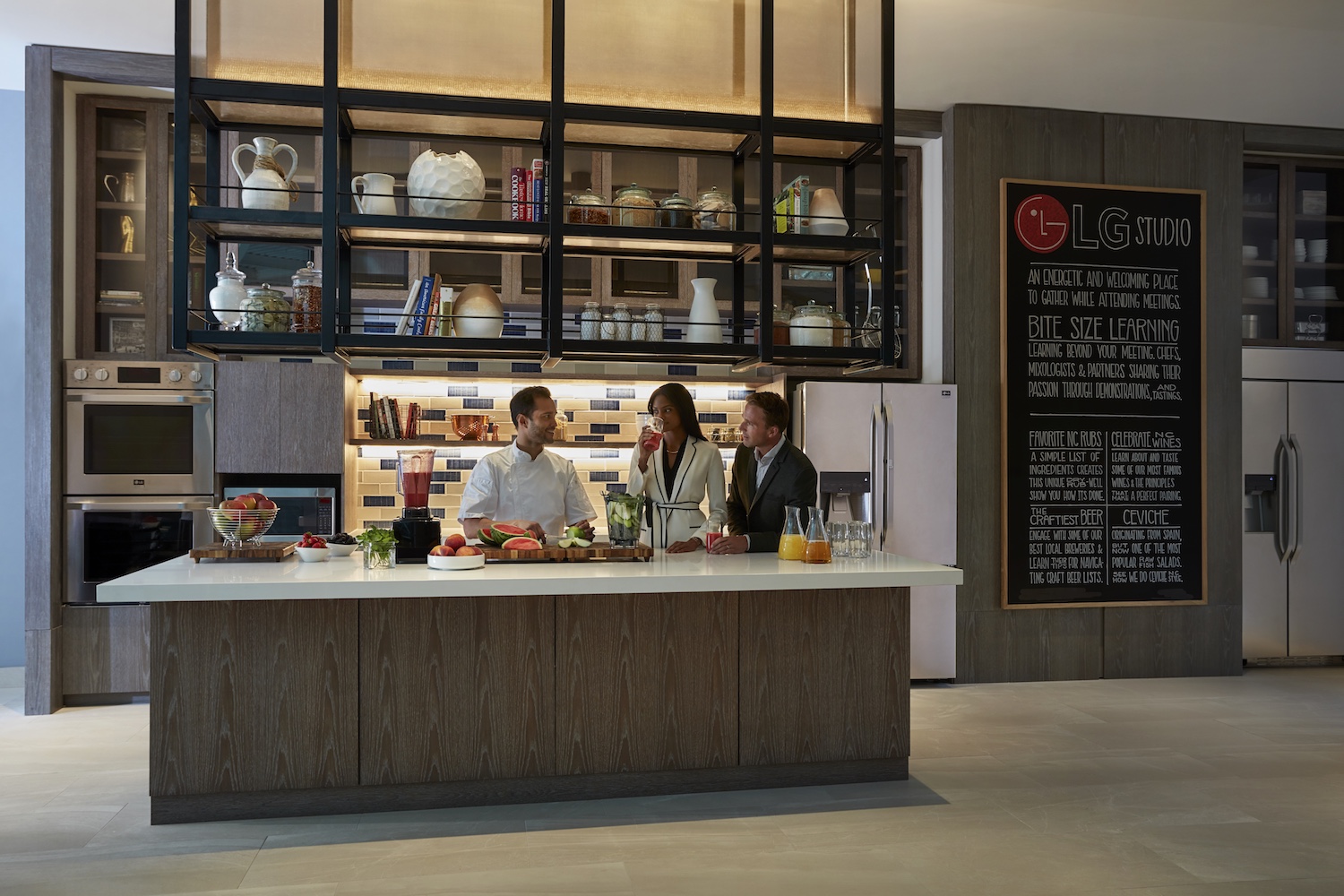 The “Immersive Kitchen at Stoke restaurant” is an open-plan dining and cooking area where chefs and guests can interact. There are cooking classes, artisan tastings and “impromptu culinary offerings”.

Described as a “Localised Marketplace”, Coco and Director is a community hub serving coffee and food, but is also a place where guests can work, buy products from local small businesses, or attend literary, music and educational events.

The Charlotte Marriott City Center originally opened in 1984 but has since been transformed in the past two years.

A statement reads: “M Beta at Charlotte Marriott City Center is yet another element that demonstrates Marriott Hotel’s ongoing transformation, elevating everything from its hotel design to associate training to best meet the evolving travel tastes of its guests.

“The brand is embracing the new pace of change, with the goal to not only transform the physical experiences on-property but also to also enable guests to think differently. Last month, the brand launched its #MGravityRoom, an interactive replica of the evolving modern guest room designs. It also recently announced its partnership with TED, bringing new ideas and creative conversation to guests.”

One of the things Globetrender loves about this approach is that it is not just forward-looking, but forward-acting. Marriott is also democratising the process by enabling the public to contribute their own ideas.

You can measure your mood at a temporary installation in the lobby of the M-Beta experimental hotel. I must’ve been feeling feisty. #mbeta #marriott

One traveller suggested the healthy vending machine, which Marriott has turned from idea, to prototype to product. Now installed in the Marriott Chicago, it is stocked with meals from Farmer’s Fridge – hopefully it will be rolled out across other properties too.

Available at select hotels, the Marriott app lets you use a “Mobile Requests” feature either before, during or after your stay to ask for anything from a toothbrush to a bunch of flowers. You can order more pillows, check in and out, and even unlock your door instead of using a keycard.

In a bid to turn its hotel bars into trendy destinations in themselves, Marriott experimented by sending one of its bartenders to Kentucky to work with a mixologist to create a bespoke cocktail menu.

Some of the ideas Marriott Hotels has given prizes to in the past include digital panels in public spaces on to which guests can post photos from their stay; and personalised rooms with framed photos of loved ones, shower temperatures, TV channels and alarm clock settings saved electronically.