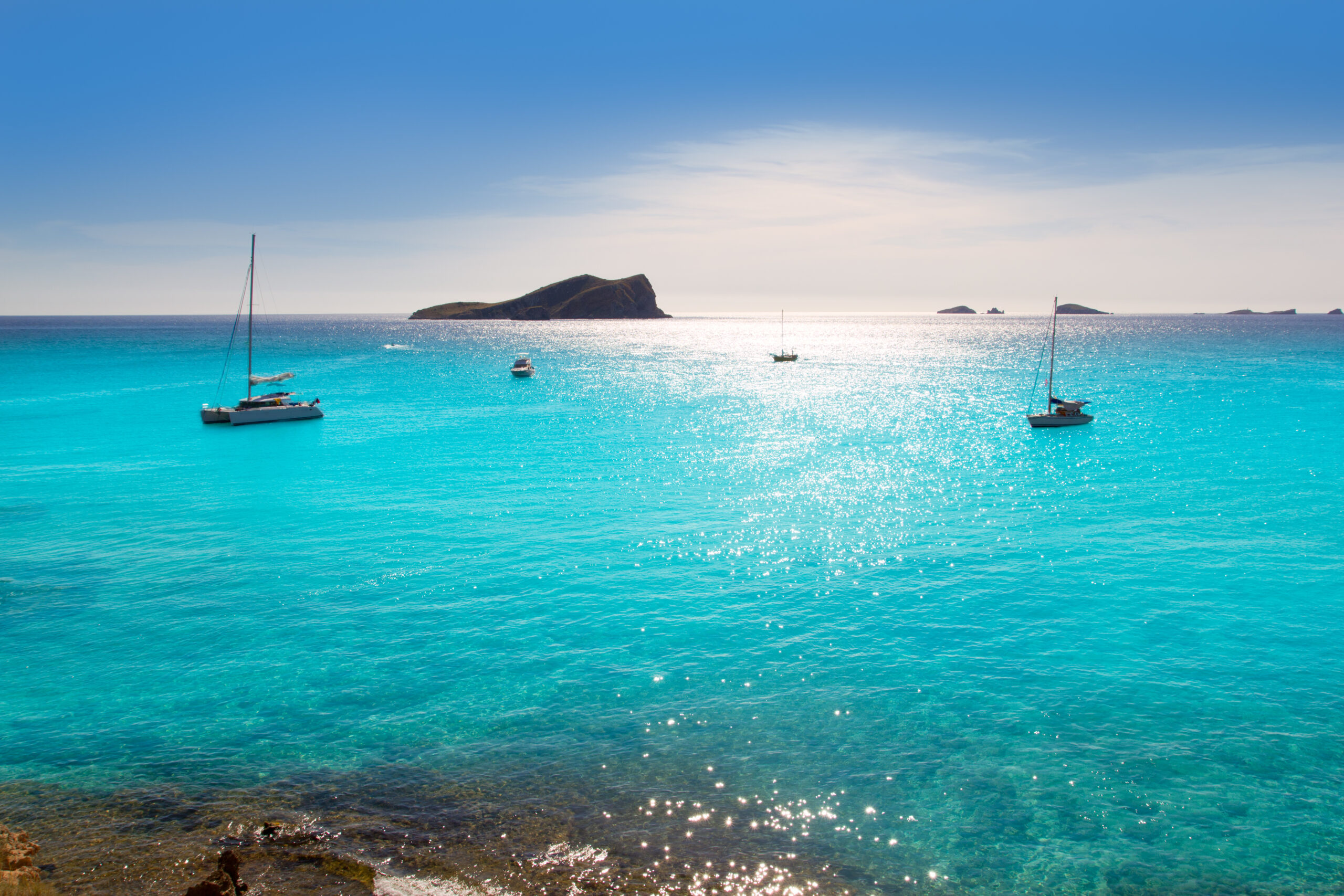 What’s it like to holiday in Ibiza during a global pandemic?

Since July 27, the UK FCO has been advising against all non-essential travel to Spain, including the Canary and Balearic Islands (of which Ibiza is one), based on the current assessment of Covid-19 risks in the country. Leah departed on July 29 and this was what she experienced…

What made you decide to book a trip to Ibiza?

I first visited Ibiza when I was 16 when close friends moved over to live there permanently. In recent years, I’ve been visiting two or three times a year and fell in love with the island for its natural beauty, bohemian way of life and incredible energy.

We hold a reunion every August, where a few of us return to the island to stay with our friends, and we were keen to maintain the tradition this year. When the UK government announced the air corridors with Spain, it seemed like the perfect time to book the trip. Little did we know that the government would change the advice just a few weeks later. 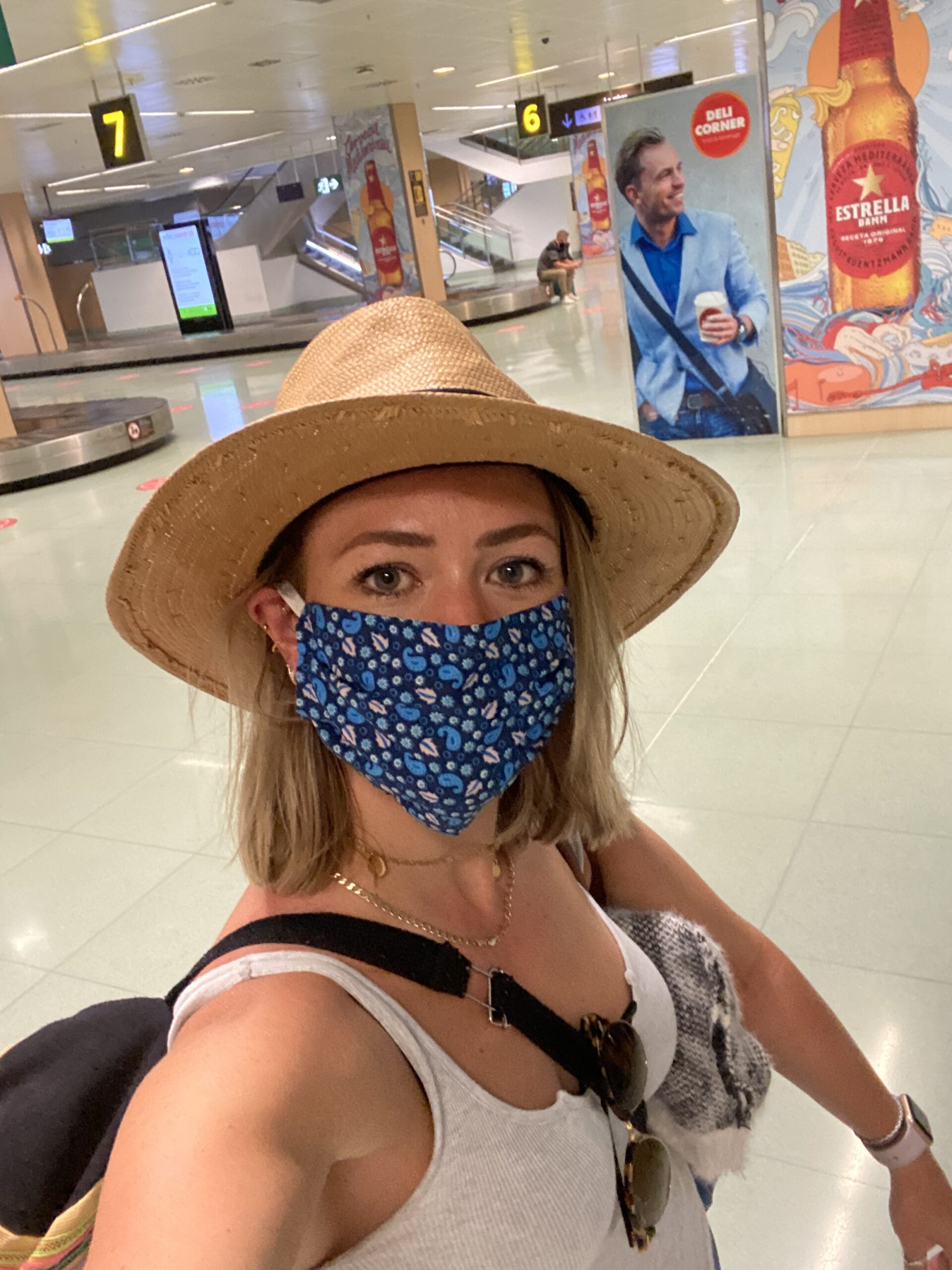 How long are you staying for?

I booked the initial trip for ten days and planned to work a portion of the time remotely, with the option to extend my return flight if I wanted to stay longer. We all hoped that the UK government would lift the quarantine for the Balearic islands while we were out there, but sadly that wasn’t the case.

Where are you staying?

Our friends have a beautiful villa in the north west of the island, close to San Joan de Labrijita. It’s located next to a small reserve and has some gorgeous beaches and hikes on the doorstep. I love spending my time in the north of the island as it’s the best way to see the local side of the island, in all its natural beauty, away from the tourist crowds. 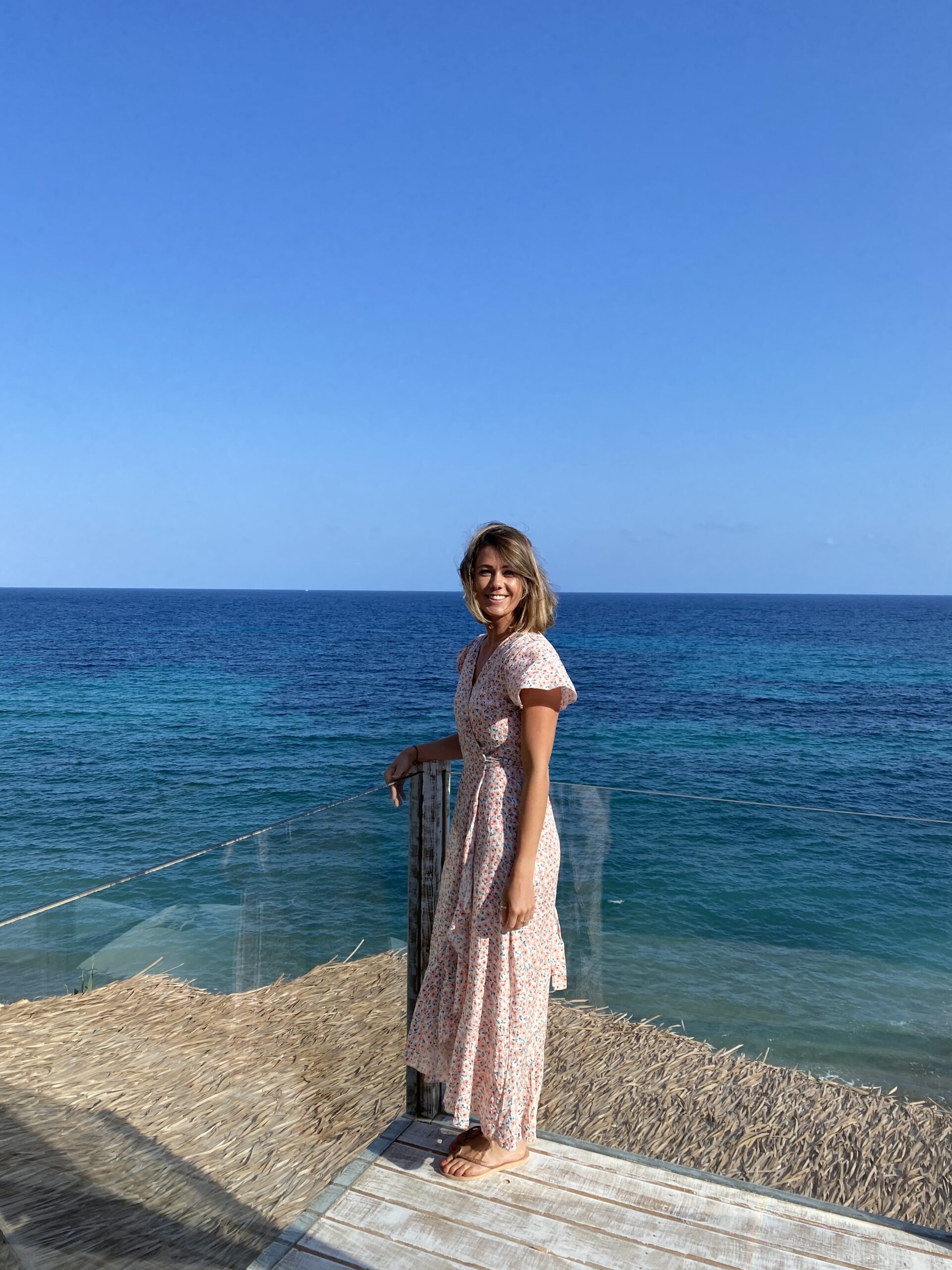 What’s the situation with quarantines for Ibiza on arrival and return to the UK?

Just before we were due to leave, the UK government implemented quarantine restrictions for travellers returning from Spain. The FCO updated their website advising British nationals against all but essential international travel to Spain, including the Balearic and Canary Islands.

There was confusion at the start as the FCO initially stated that the islands were exempt, but this was changed to cover both mainland Spain and the islands.

This meant we were faced with a 14 day quarantine on our return to the UK. Unlike the lockdown we had all been through earlier in the year, quarantine restricts you from leaving your house at all for the full 14 days.

We were required to complete a “Public Health Passenger Locator Form” stating where we were planning to quarantine and contact details should we need to be reached. 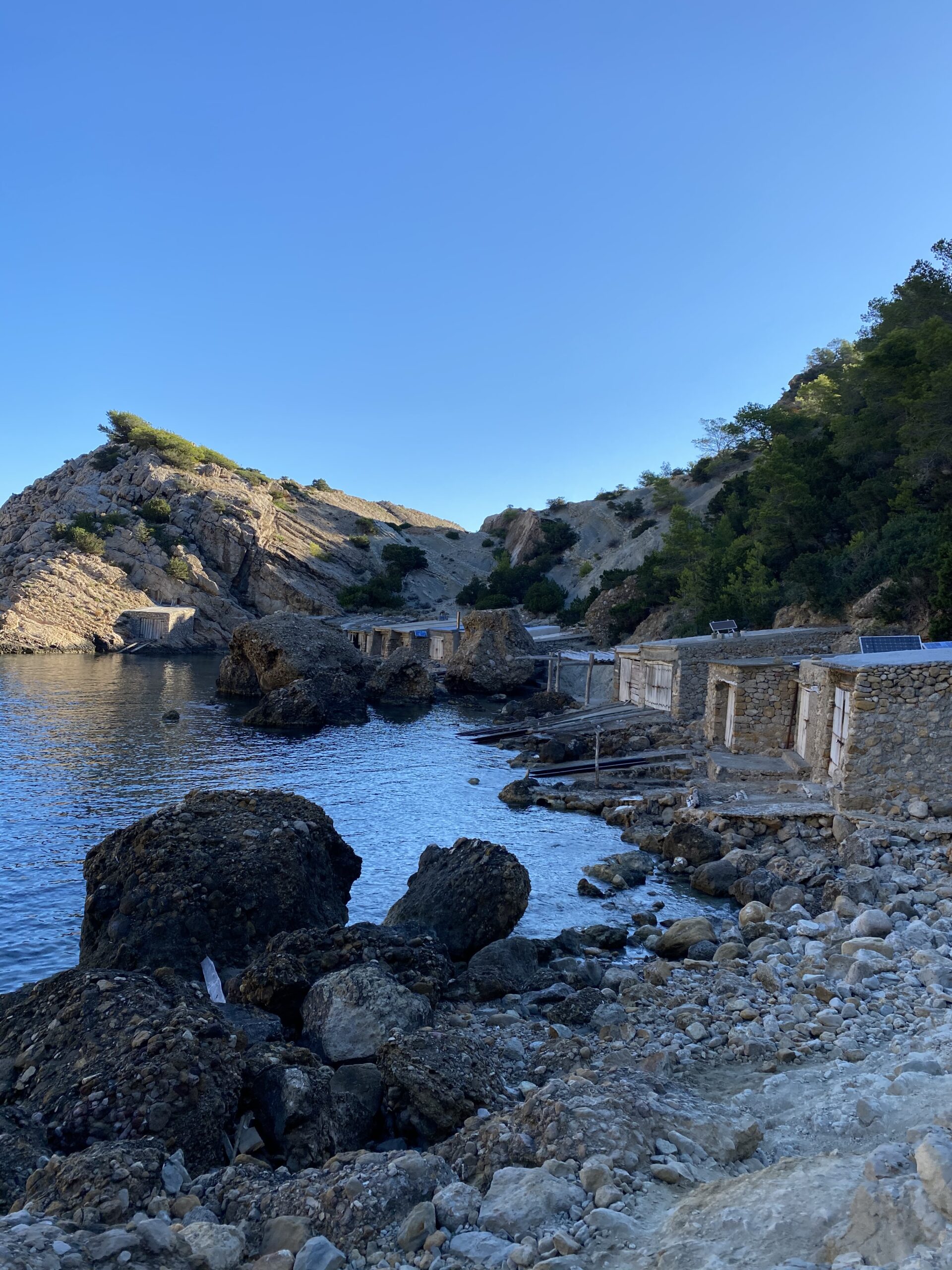 What kind of travel insurance do you have?

With the change in FCO advice, my usual travel insurance was invalid. After some research, a friend recommended battleface (battleface.com) to me as they had recently used it for a trip to Portugal, which was also on the quarantine list.

The policy I took out cost £31.72 and covered countries under FCO and government essential and non-essential travel advisories as well as medical expenses for Covid-19. The irony of needing insurance to visit the bohemian island of Ibiza from a provider that specialises in some of the most hostile regions of the world was not lost on me!

Did you have any concerns about the trip?

Not at all. The Covid cases in Ibiza are low and I was going to be spending my time hiking in the hills, where I often don’t see another soul for hours, on lesser visited beaches and staying with a small group of close friends, rather than partying in packed bars.

Why did you choose not to have a holiday in the UK?

For me, this wasn’t a decision between holidaying abroad or in the UK. I’m still looking at taking a UK break in September.

How much did your ticket cost?

I booked an outbound flight with British Airways and a return with Easyjet through Opodo, which cost £223.

At security, plastic screens and dividers had been implemented and masks were required in most areas, although you did remove these briefly when passing through the security scanners. The airport itself was very quiet, with most of the shops being closed. 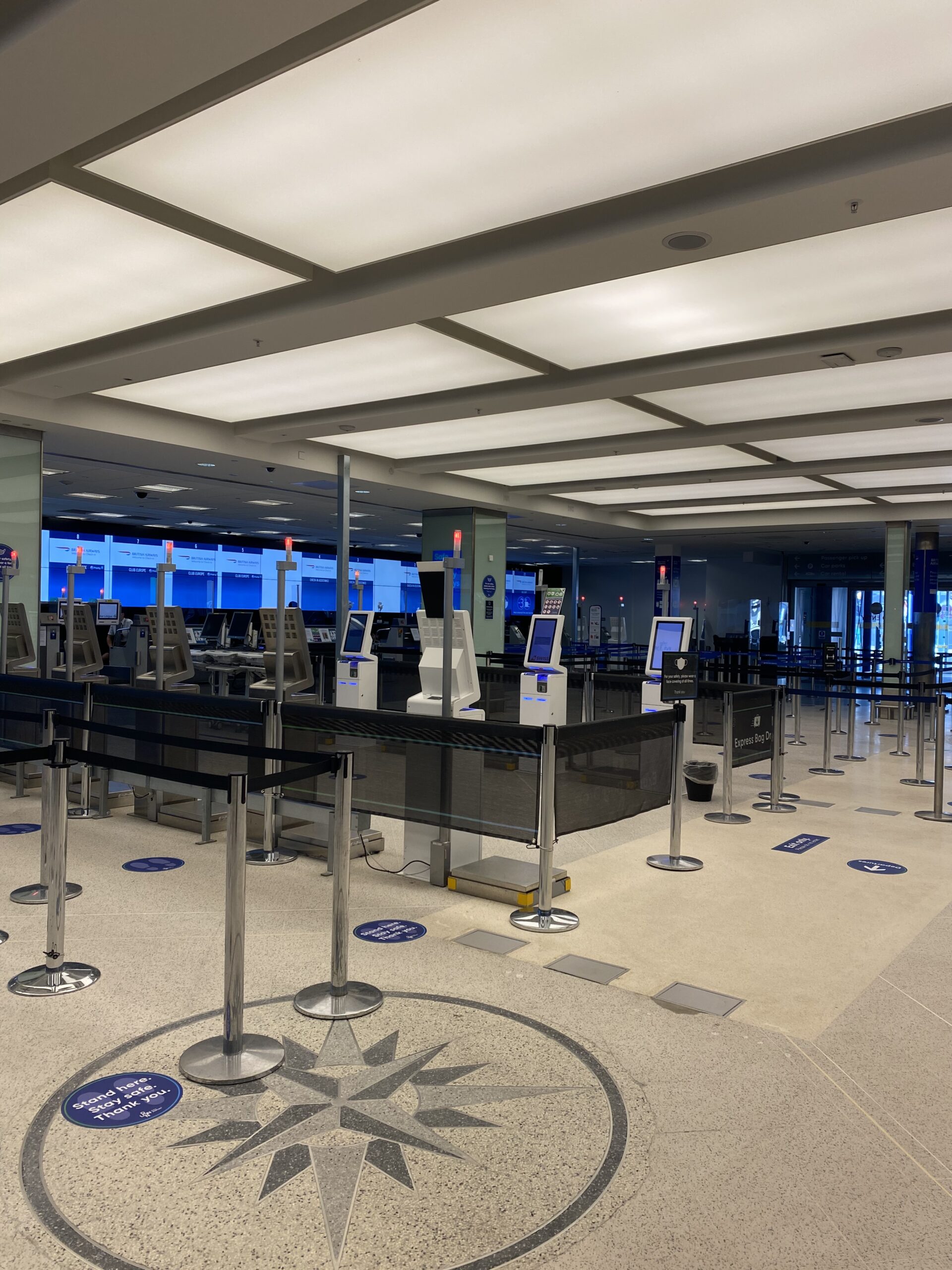 How was the flight different to normal?

British Airways has introduced new safety measures on board its aircraft, which are communicated as part of the briefing before take off. The use of face masks throughout the flight was the biggest change to normal, although you can remove it when eating or drinking. I was surprised to see a number of travellers not complying and the crew having to ask them to put their masks on.

The in-flight food service is paired back to a plastic bag containing crisps, a biscuit and a bottle of water. This is to avoid the crew having any contact with passengers’ food I was later told by one of the hostesses. Hand sanitiser and disinfectant wipes were also handed out at the start of the flight.

Passengers were asked not to leave their seats unless really necessary. If you needed to use the toilet, you’d have to wait for one to become available before leaving your seat to avoid queuing in the aisle.

Boarding and leaving the plane was done according to seat numbers to restrict the number of people in the aisle at one time. This seemed a little counter-productive when we all stepped onto the same crowded bus outside, waiting to take us to the arrivals. 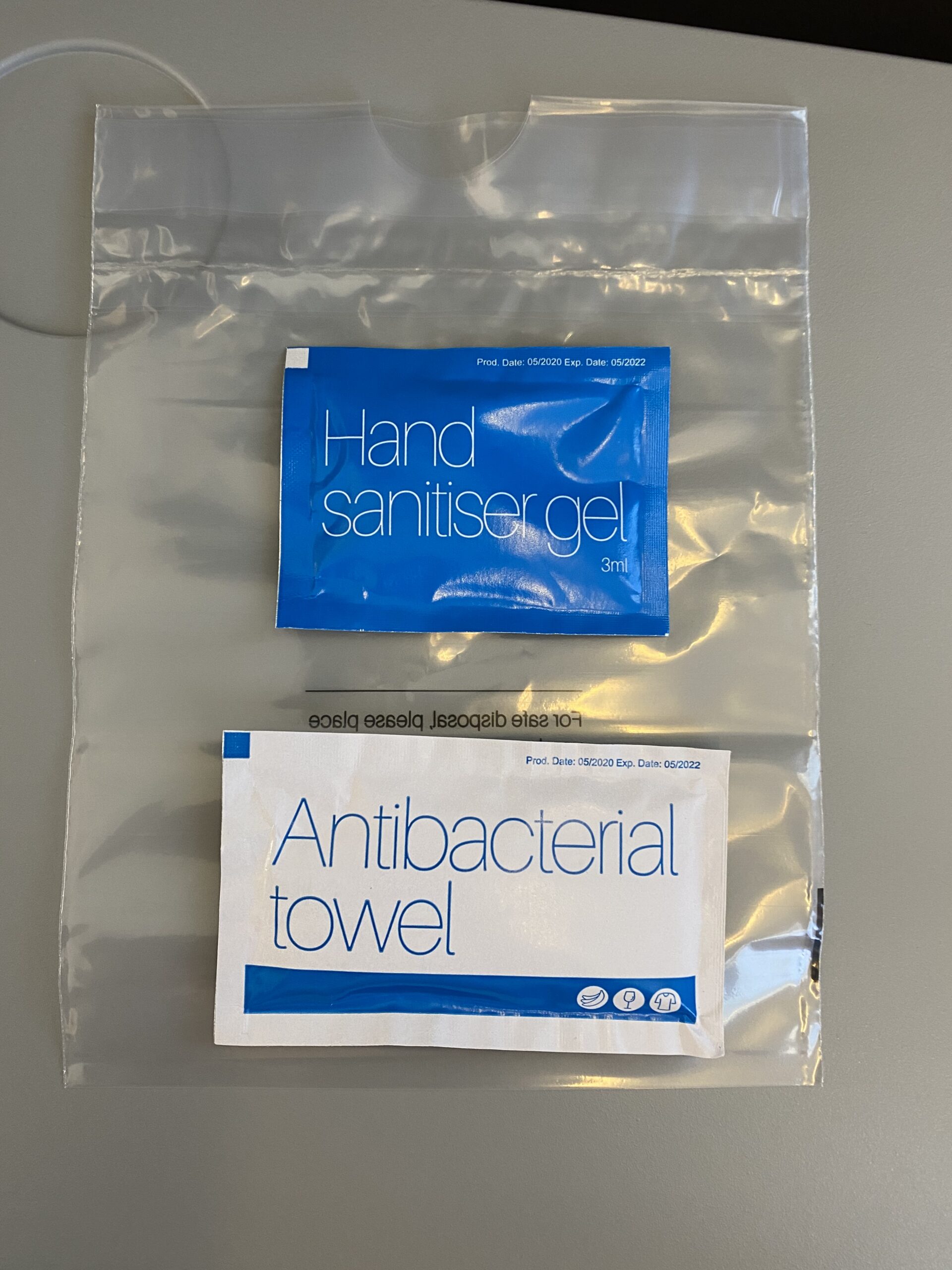 What did you learn from speaking to the crew on board?

With many of the British Airways crew furloughed over the past few months, they were required to undergo virtual training to update them on the new procedures that had been implemented.

They then had a one to one training on board to run through all the new policies. These included using the intercom phones to communicate more with other crew, rather than walking up and down the plane as before, wearing gloves to carry out tasks and helping travellers with the changes to boarding and disembarking.

The crew told me that the plane undergoes a thorough disinfection prior to travellers embarking and toilets are also disinfected by crew every 15 minutes throughout the journey. It was good to hear from the crew that the majority of travellers that they had flown had been supportive of the new changes and, on the whole, compliant.

Is there any testing on arrival?

When we arrived into Ibiza, we had to provide a tracking form with the address we would be staying at for the duration of the trip. They also had a temperature checking station set up, which all travellers had to pass through one by one before entering the airport. 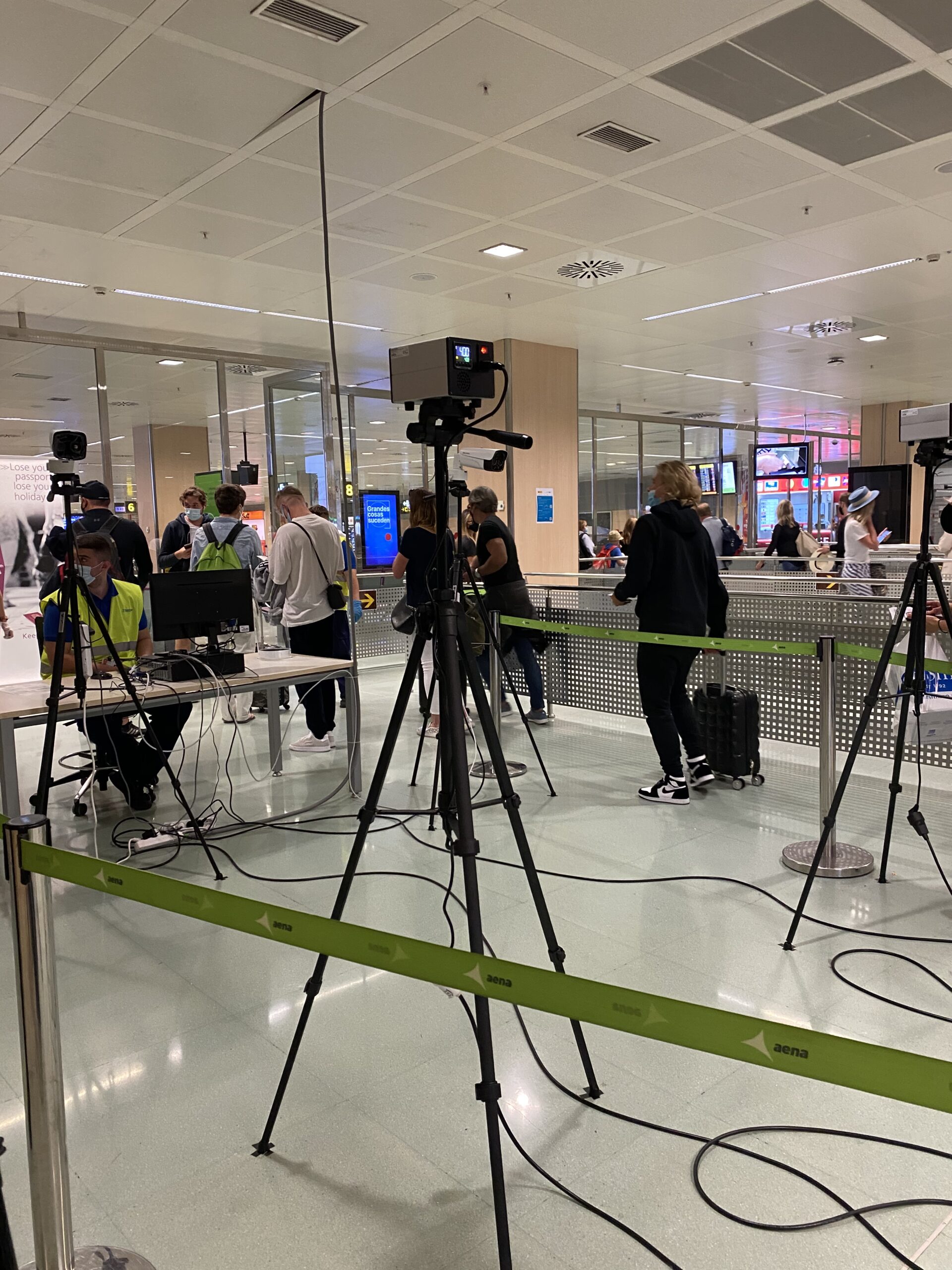 What kind of experiences did you have during your stay in Ibiza?

During this trip, I was keen to explore some new running and hiking trails in the campo (forest areas), as well as visiting some of my favourite beaches and restaurants. I also took part in a guided breathwork session with a coach on the island, which was an amazing experience. 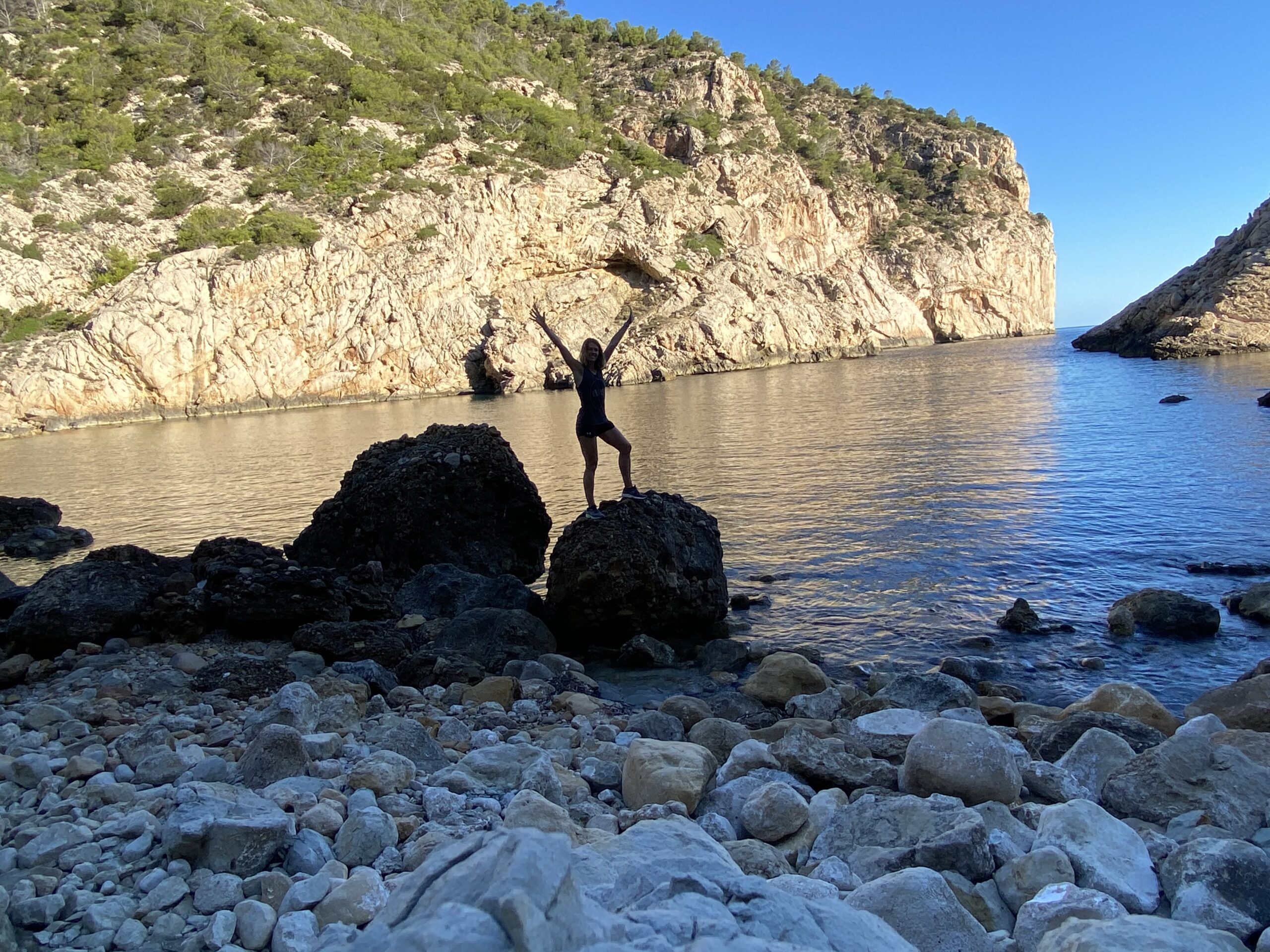 While the main clubs have announced that they will not be opening this season, many restaurants and bars are open for business. It’s a great time for travellers to explore the island in the high season, without the crowds, and important to help support the local businesses who have lost almost all their summer income. 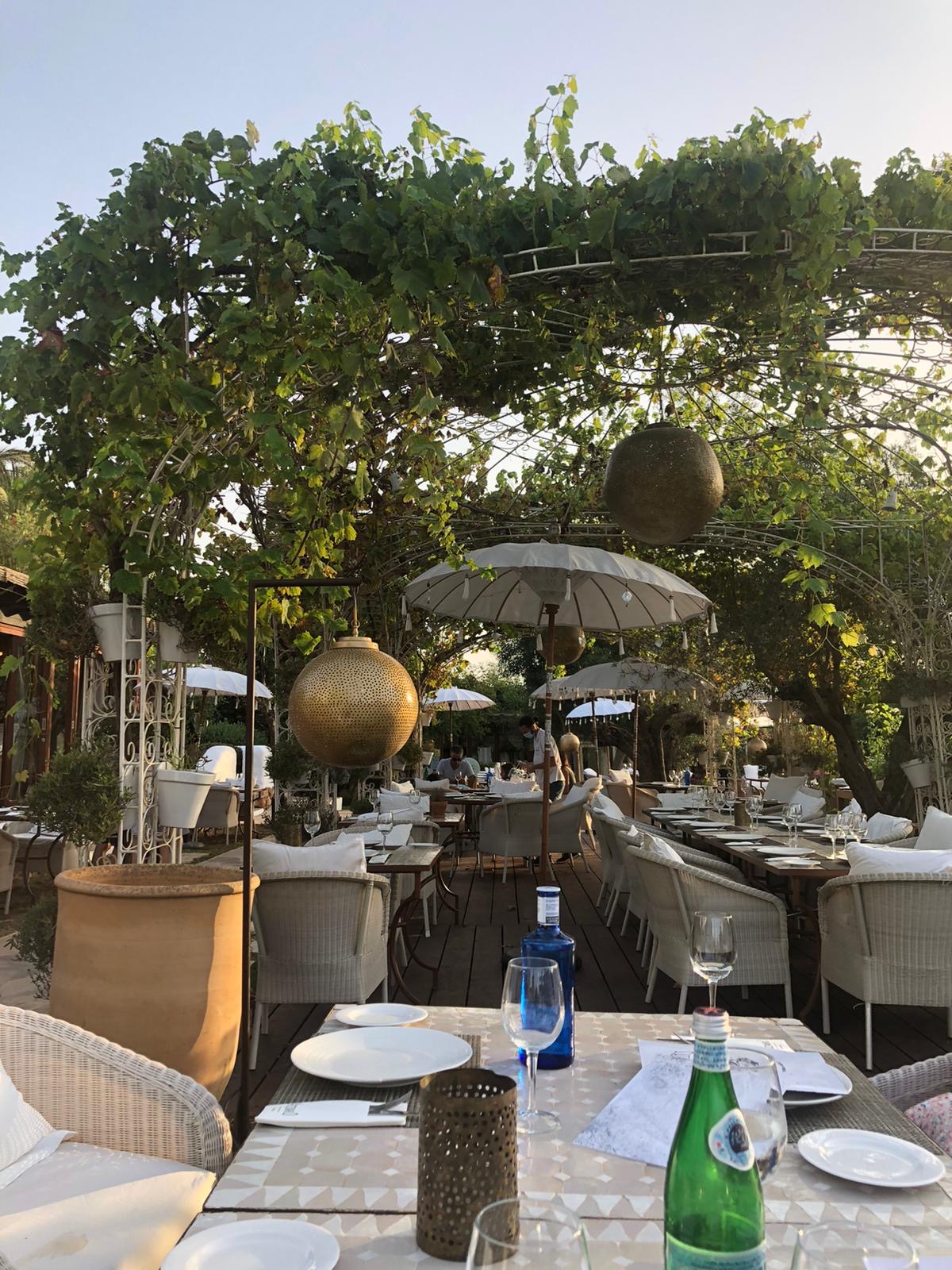 I mainly ate at small, local restaurants or bought food and cooked at home, but did also visit the beautiful Atzaro beach club on Cala Nova, their hotel restaurant near Santa Eularia (atzaro.com), as well as Amante beach restaurant for a sunset dinner (amanteibiza.com). While many places were quiet, some of the more popular hotspots still require bookings in advance.

In Ibiza, anyone over the age of six is expected to wear a face mask in public places. This doesn’t include the beach, beach promenades or when you’re sitting in restaurants, although you will need to put one on to enter the restaurant and to go to the toilet or bar.

You’re also exempt during exercise and outside urban areas, which was a relief when it came to running the steep trails and hiking the coastline.