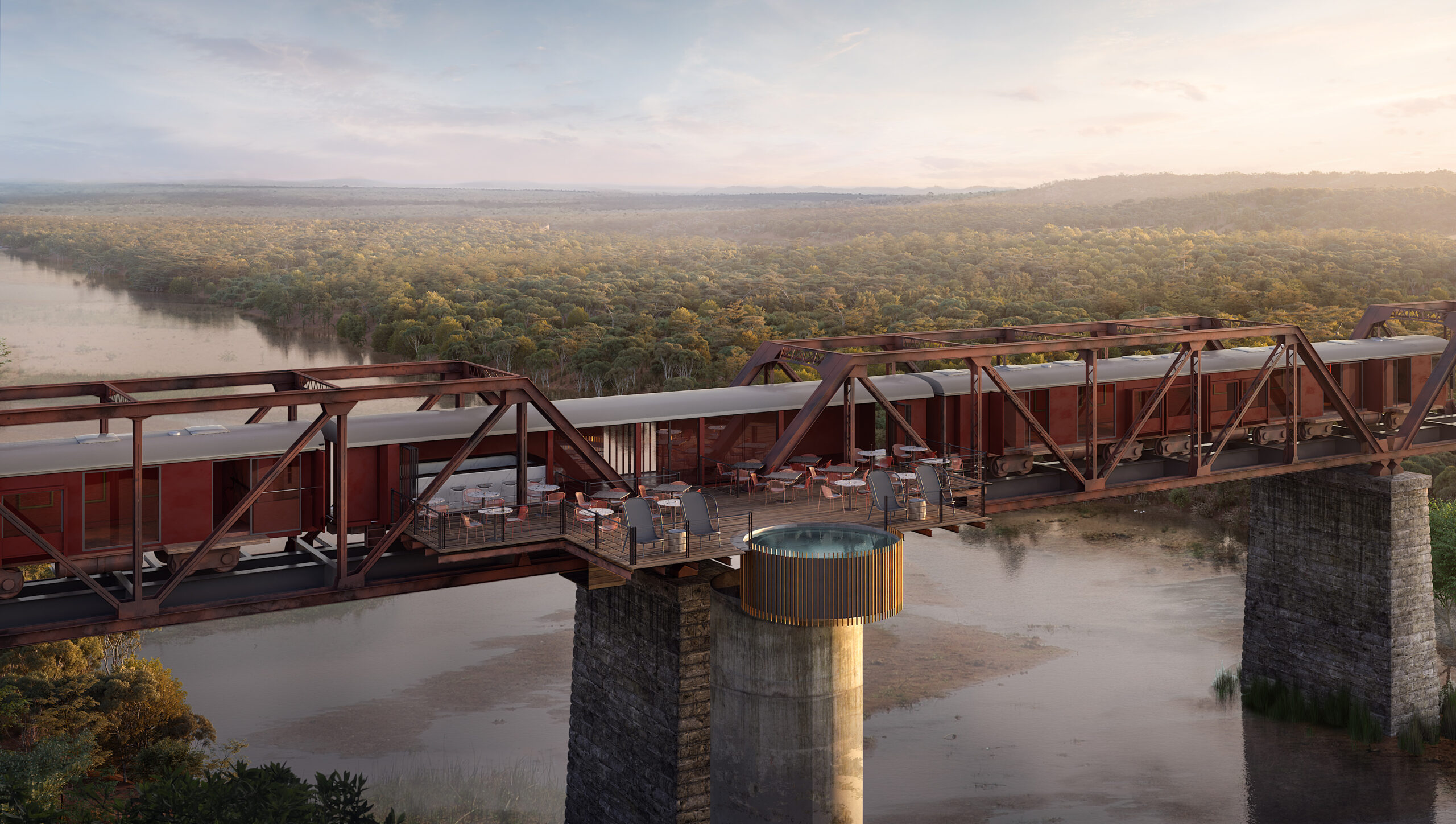 When it opens later in the year, the Kruger Shalati Train on a Bridge will be a boutique hotel like no other, occupying a converted steam engine parked on a bridge in South Africa’s Kruger safari park. By Erica Jamieson

Perched high above a crocodile-infested river in South Africa’s Kruger National Park, a new boutique hotel housed within a renovated steam train hopes to open in September 2020, offering 31 luxury rooms that hark back to a bygone era of privilege and exploration.

Permanently stationed on the 300-metre-long Selati Bridge above the Sabie River, the Kruger Shalati Train on the Bridge pays homage to the first tourists that came to Kruger in the early 1920s, when the train would park overnight on the same spot where the Kruger Shalati will be positioned. 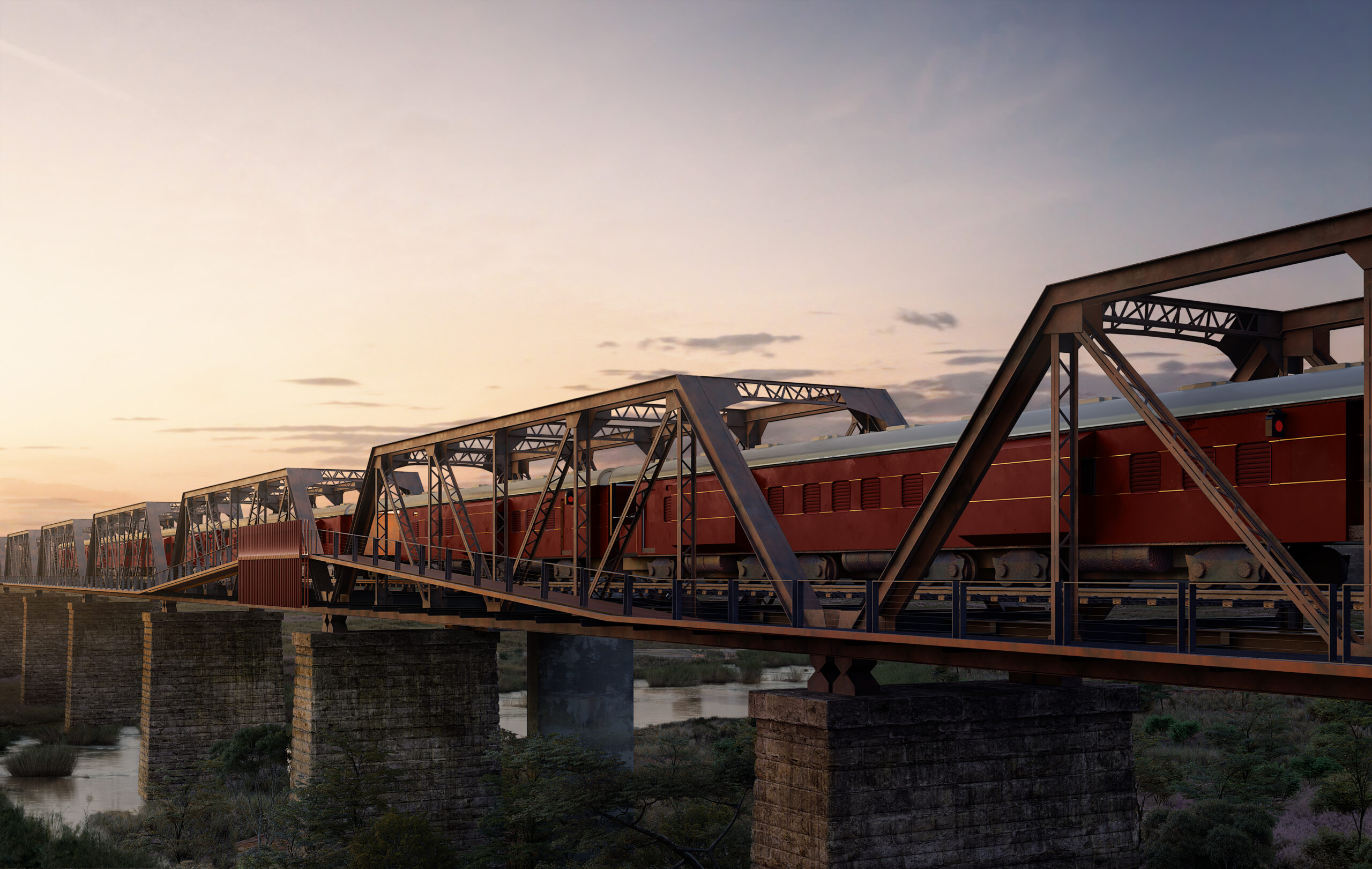 The hotel’s 31 rooms, made up of 24 carriage rooms and seven luxury Bridge House rooms, have access to a bespoke terrace and overhanging pool, and feature floor-to-ceiling windows offering unencumbered views of the wildlife below. 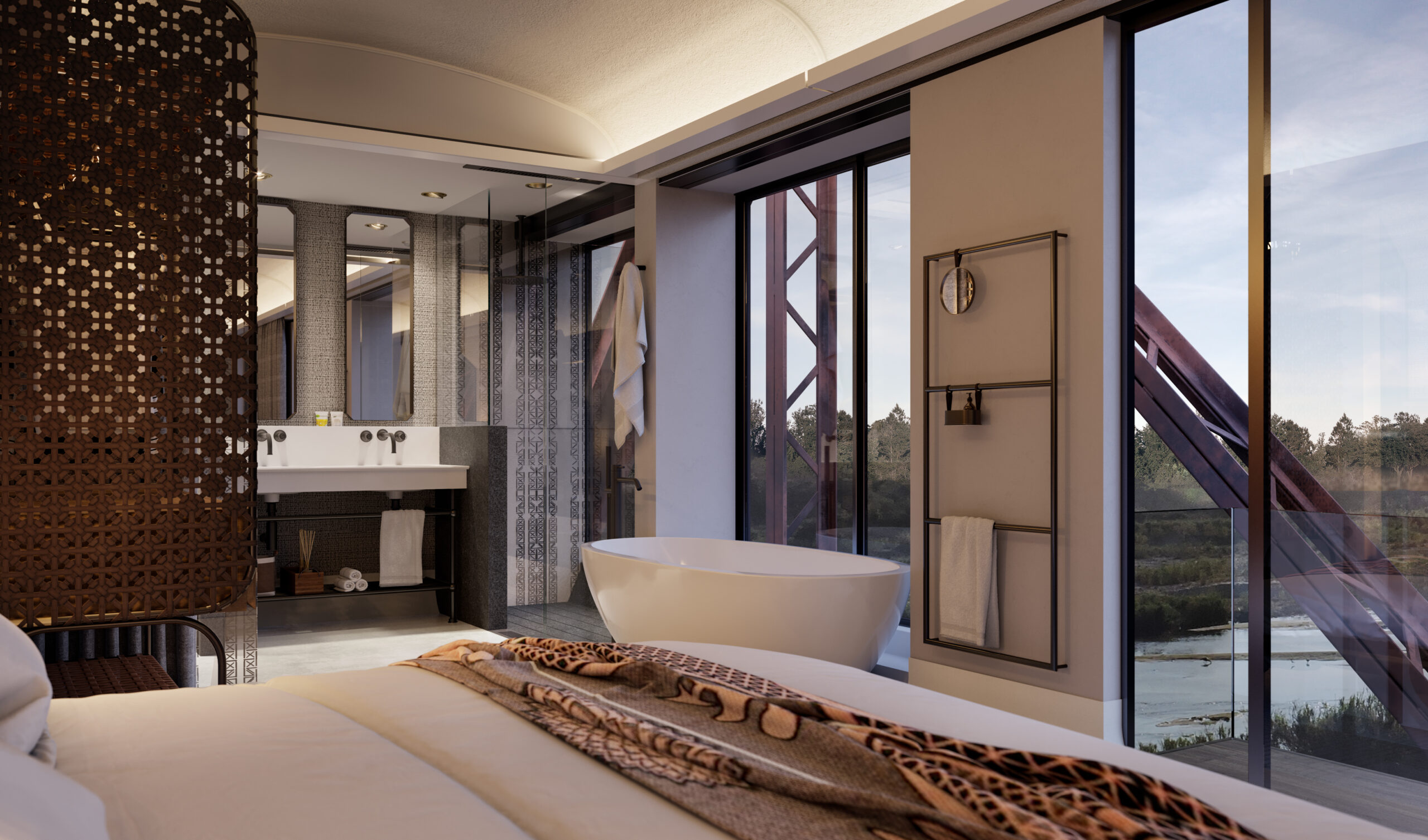 Bridge House rooms are situated next to the bridge, alongside the hotel’s honeymoon suite. Stays include two daily safari excursions by truck. 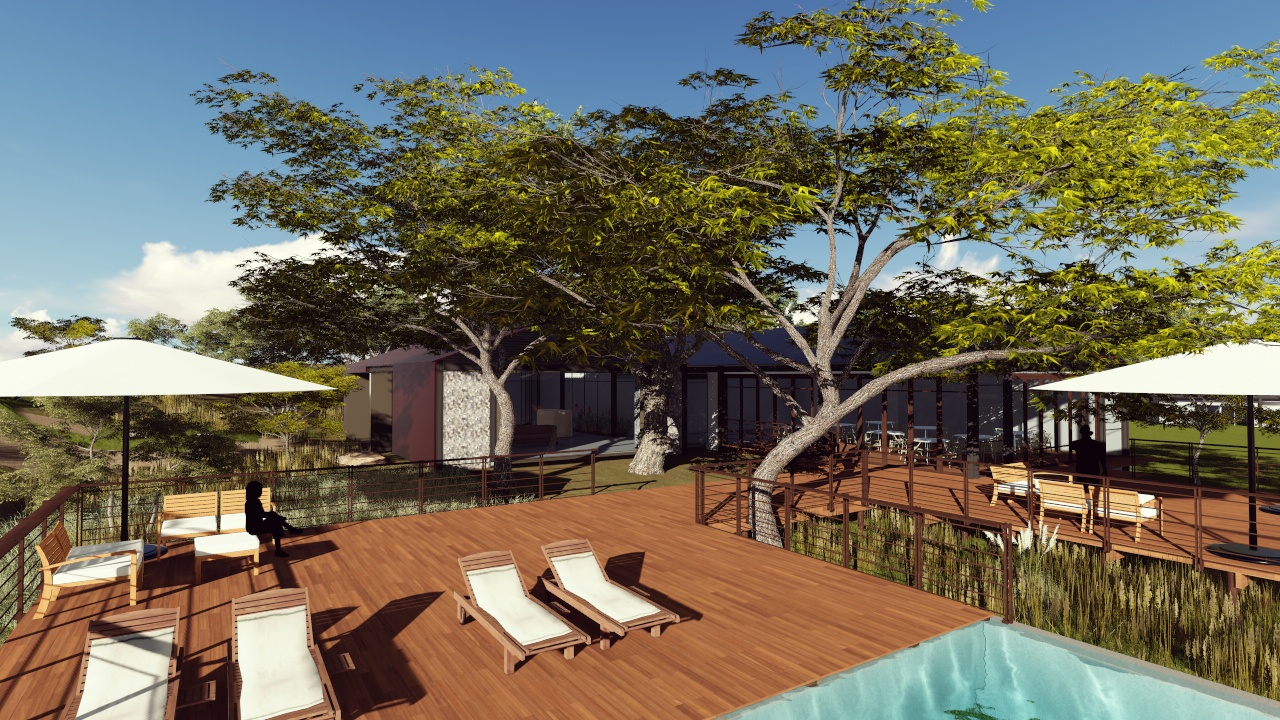 Kruger National Park became South Africa’s first national park in 1926, and is one of the largest in the world, at just over 7.5 sqkm. Along with the “big five” (lions, leopards, rhinos, elephants and buffalo), the park is home to 147 mammal species, more than any other African game reserve.

“The Kruger Shalati Train on a Bridge takes people back to a long-lost time and makes them feel part of the history of the Park,” said Jerry Mabena, CEO of Thebe Tourism Group, owners of Kruger Shalati.

“It gives a truly memorable glimpse into those early days of the Kruger where the untamed African spirit reigned supreme. We are looking forward to taking our guests on an equally exciting journey that is not available anywhere else in the world.”

For head interior designer Andrea Kleinloog, it was vital that Kruger Shalati’s rooms and common areas not only provide a space for visitors to experience the park’s natural beauty, but also the region’s craftmanship and rich design history. 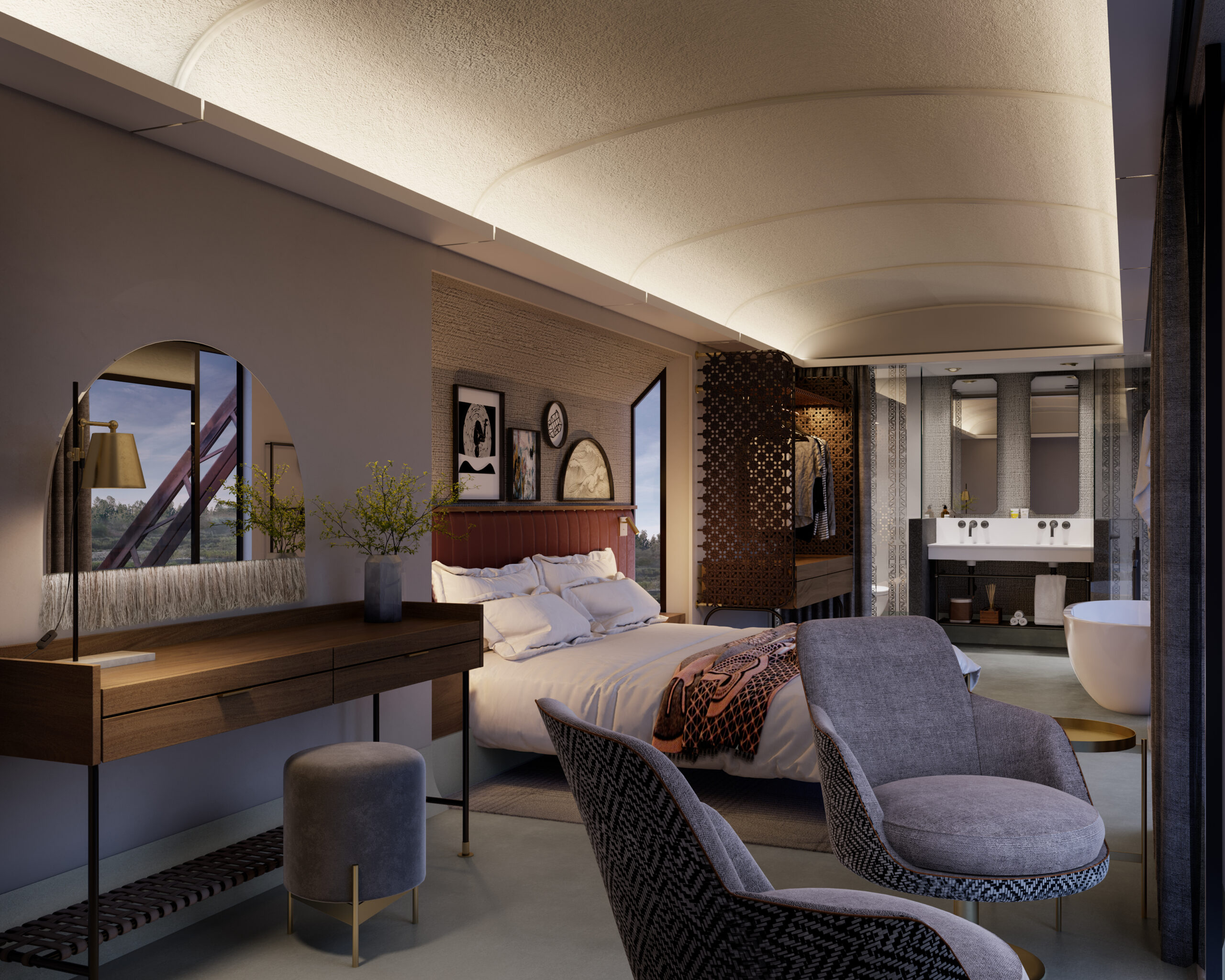 “From our perspective it was imperative that the interior design was respectful to the tradition and heritage, but didn’t succumb to being too obtusely ‘themed’, or falling into the trap of being old-fashioned,” Kleinloog explained to Africa.com.

“It was important that the interior design and detailing reflected a distinct and proudly Afrocentric experience, without deferring to stereotypes,” she added.

Construction has temporarily paused due to the global pandemic, although management remains hopeful for a from November/December 2020 opening. “We are accepting reservations but our exact opening date is bit uncertain,” a spokesperson says.