Zed, an airline that aims to bridge the gap between commercial transport and private jet charter services, will launch next year, with five-course meals, VR headsets and self-cleaning toilets. Anthony Pearce reports

The airline is part of Zed Aerospace, which was founded by Zander Futernick in 2016 when he was just 20 years old. The company also promises to develop innovative flying solutions for commercial and private aviation applications.

It will have a fleet of upgraded, Swiss-designed Bombardier CRJ700 aircraft, which have been modified to accommodate 29 passengers instead of 75, meaning those on board will have a private jet-style exprience. Seats will be 20 inches wide with 44 inches of legroom. 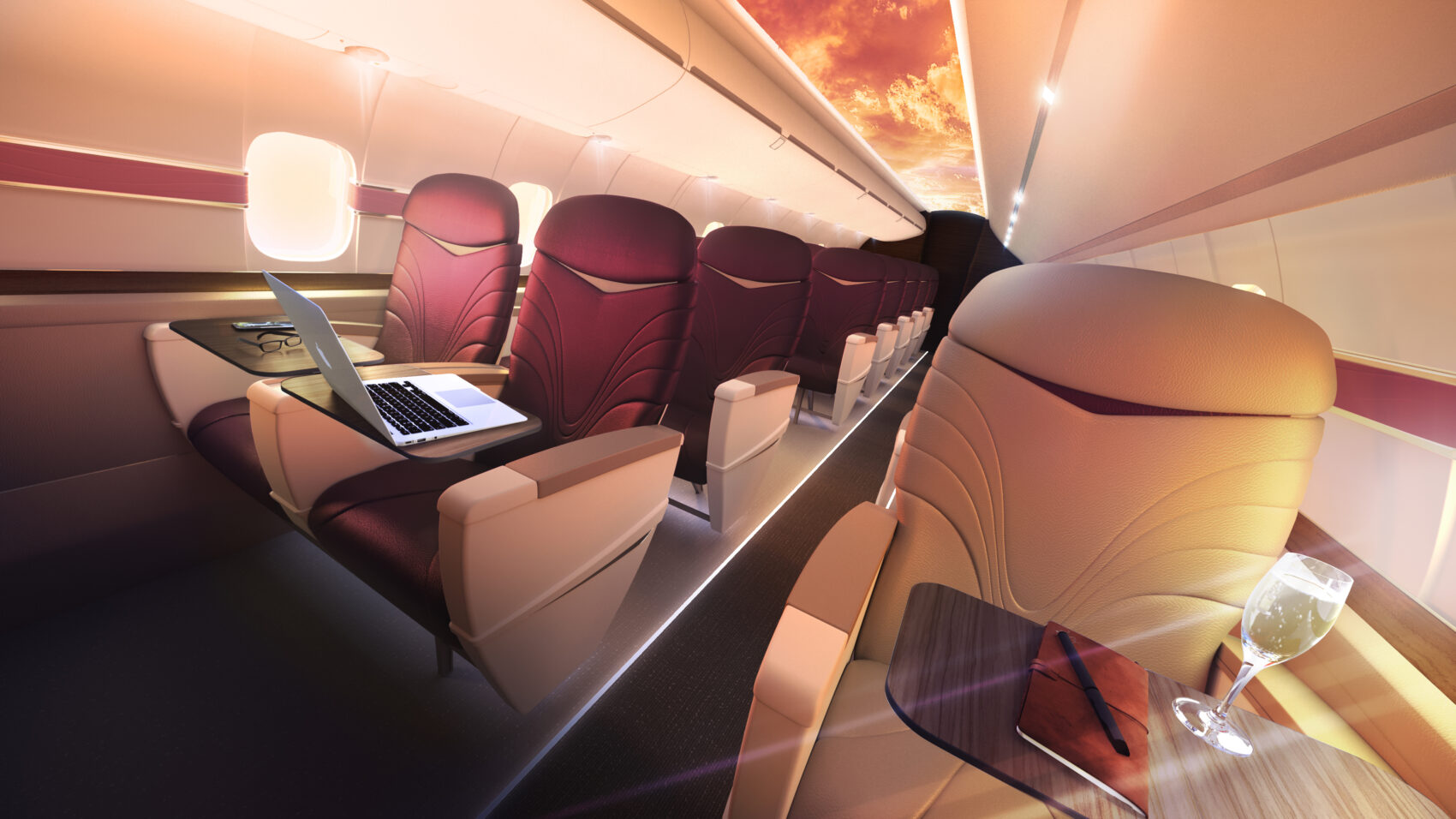 Zed says that all customers will receive private airport service, a rotating menu of fusion tapas, SushiBar selections, and a curated list of wine, liquor and cocktails. High-speed wifi, a free iPad Pro, and a SkyLights Virtual Reality headset will also be available.

Instead of watching films on an iPad or seat-back screen, the Allosky Cinematic VR headsets offer 3D, 2D and 180° on a full HD, IMAX-style display.

Entertainment options will include a catalogue by 20th Century Fox, DreamWorks, Warner Brothers and Lionsgate. The headset will also stream a live 360º view from a camera mounted on top of the plane.

Those travelling in more expensive Wave class will enjoy a cabin with just eight seats, as well as a “Book the Cook” service whereby they can custom order a full five-course meal to be prepared on board. “WAVE offers a level of service exceeding that of a private jet,” says Zed.

Even more impressive is the futuristic lie-flat design of the Wave seat, which has been designed by YASAVA Solutions. It features a thick mattress and “optimised reclines for multiple body positions that allow for better circulation, improved breathing and a reduction of the dangers of DVT”. 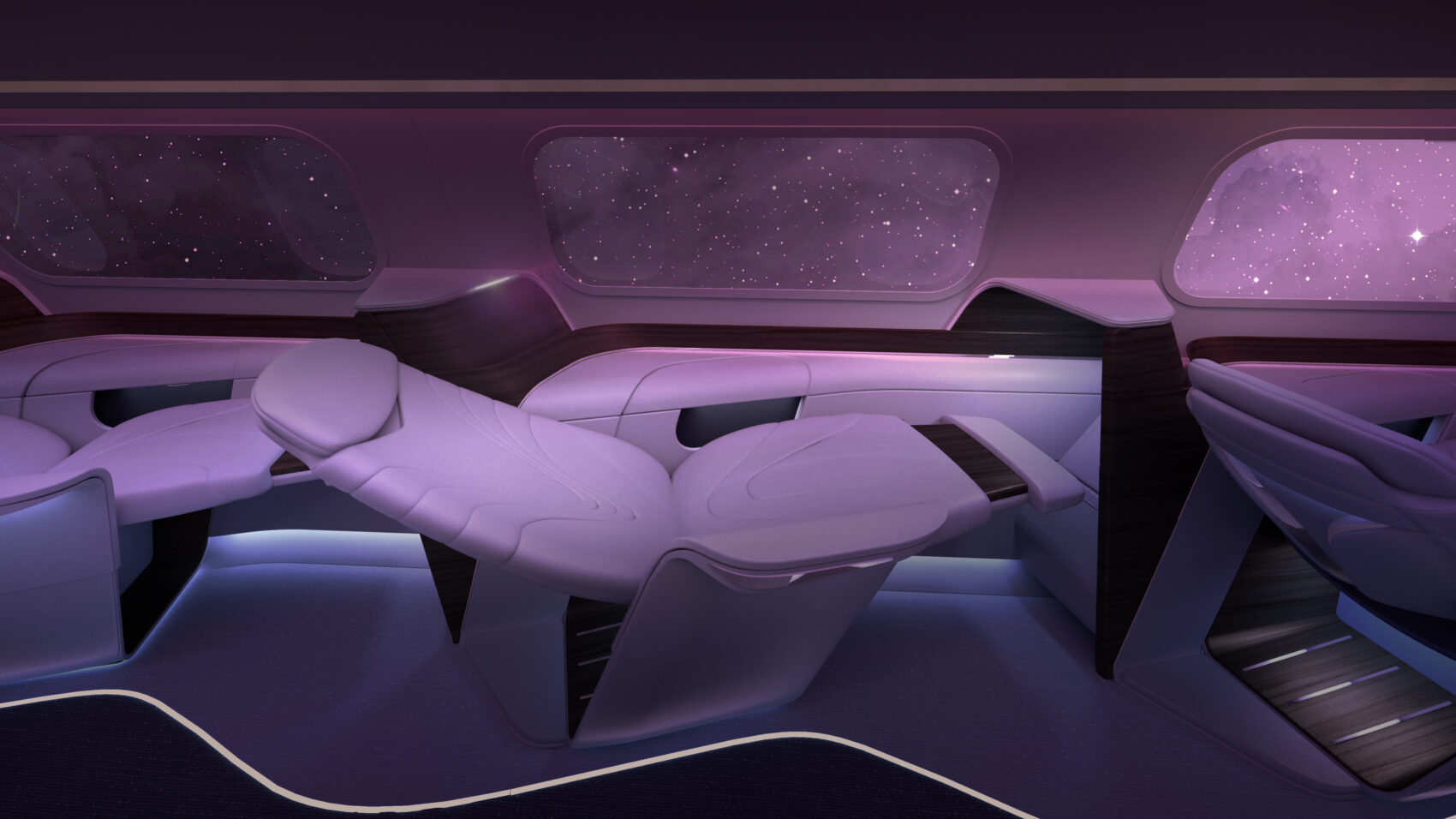 The use of “pioneering OLED display technology” will see the integration of a panel on the ceiling of the cabin that will give the impression that passengers are looking up through a window at the sky, when in actual fact, it is a screen. This will create a feeling of space and light. 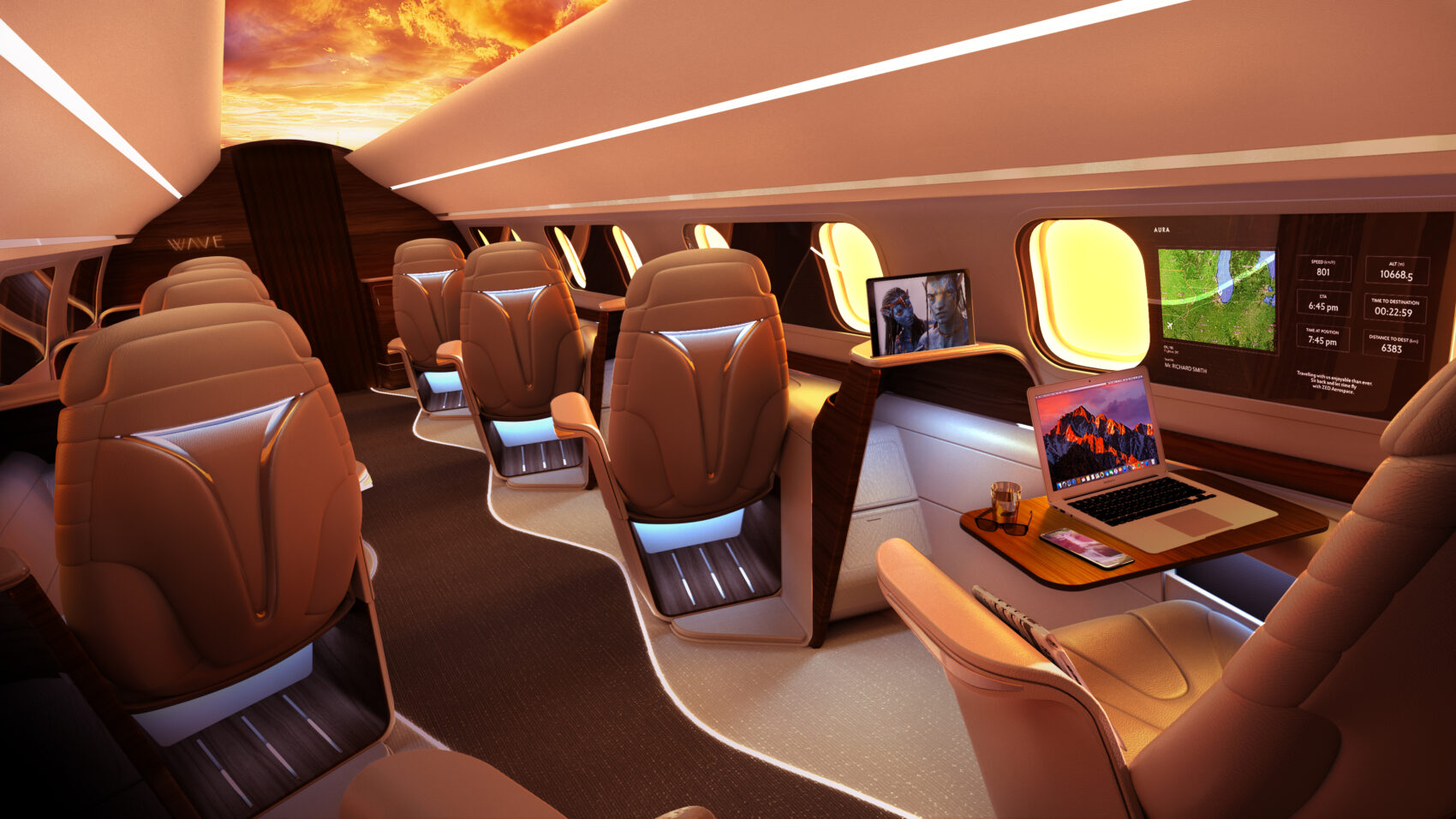 Unlike most plane interiors, which are very dirty, Zed is developing the “most hygienic aircraft in the sky”. In addition to top-end air filtration units, toilets will self-clean after every use, and be exposed to ultraviolet light that kills 99 per cent of all germs.

Other innovations will include the ability to book flights with Siri, and carbon offsetting built into the price of every ticket, to make the airline sustainable. 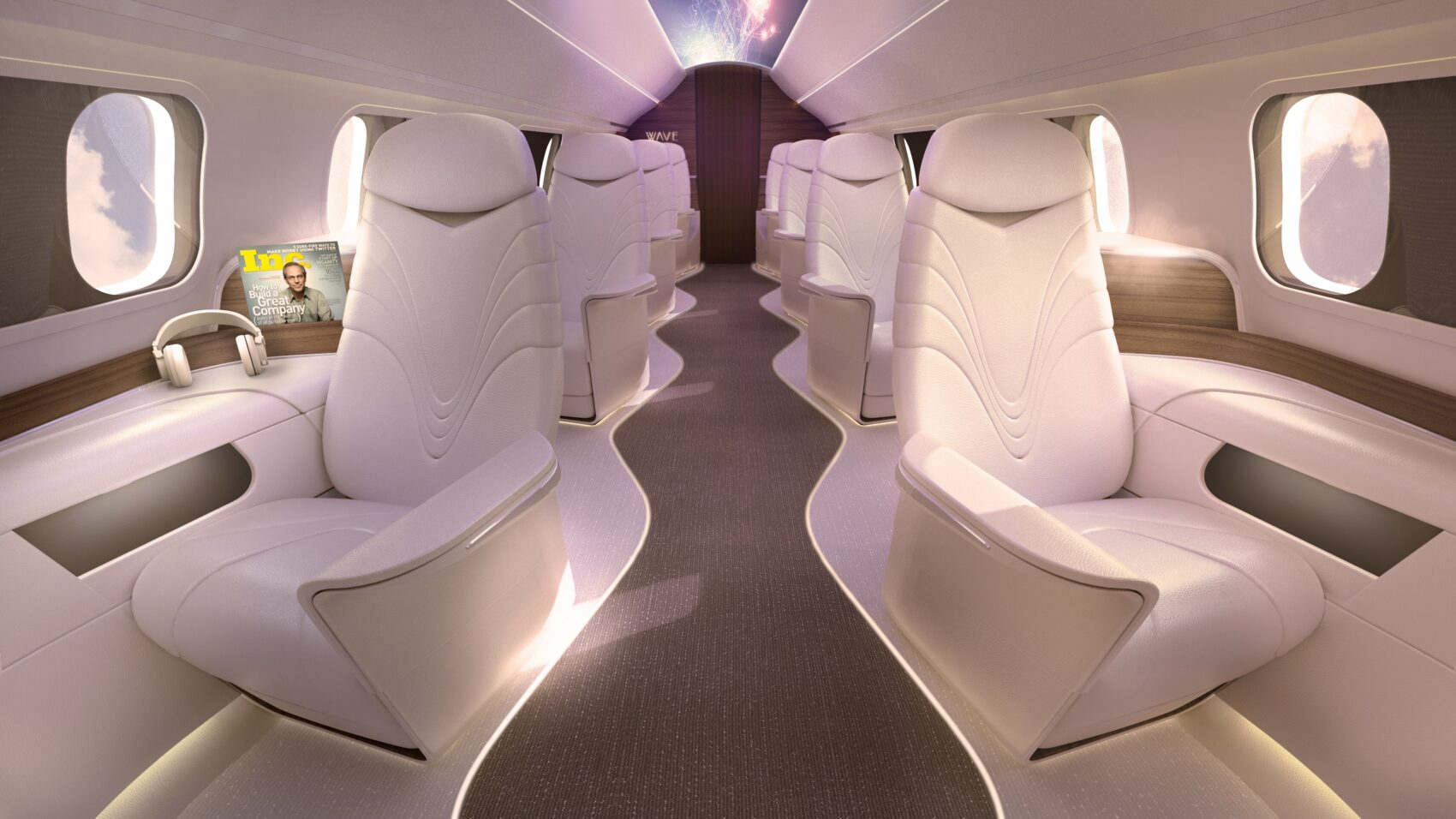 Where will Zed fly?

Zed Aerospace, which is headquarted in Miami, will connect North American metropolitan hubs with “reliable and frequent service,” according to the company.

To serve the needs of business travellers, no city pairing will be served less than twice daily, with increased frequency on busy routes. Zed will be operated by Presidential Aviation, an established FAA Part 135 private jet operator.

Seasonal routes will be launched throughout the year to popular ski, holiday and event destinations. Schedules will be released every 90 days and city routes will be served year-round.

According to Forbes, which described Futernick as the “CEO who is revolutionising luxury air travel,” Zed will depart from and arrive at private airports and terminals – initially Miami, New York, Chicago, Atlanta, Los Angeles and Denver. This means very little queuing (or none at all).

It will then be rolled out to Las Vegas, San Francisco, Seattle, Boston and Houston. 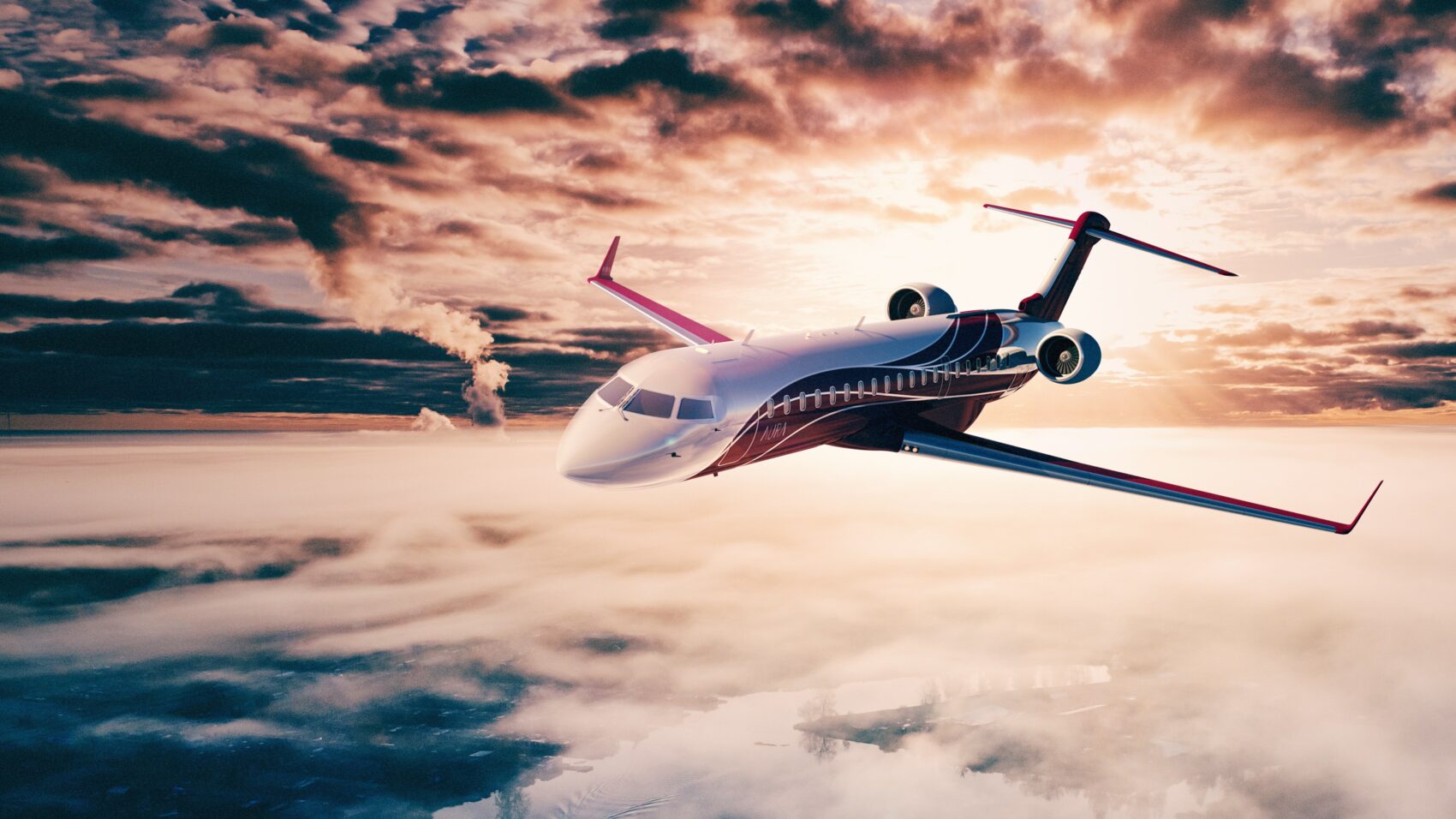 Writing on the Zed website, Futernick said: “I want you to love flying as much as I do. Zed is the vision of an aviation geek who wants you to reimagine what air travel can be. Zed is all about you. You can’t wait for your next flight, and I can’t wait to welcome you aboard.

“I founded Zed Aerospace in 2016 to create flying experiences yet unknown to the traveling public. The airlines of the United States had succeeded in their race to the bottom and I wasn’t going to let them strip away my passion.

“Zed is a deliberate effort to create a beautiful flying experience. No aircraft on the market today was designed for what we set out to accomplish, so we had to go design one ourselves. Zed Aerospace crafted Zed to be the most advanced fleet in the sky, unveiling the most modern technologies never before seen on aircraft.”

He added: “You can expect to see me every day, in the air, serving you a glass of champagne and putting the finishing touches on your steak. I am dedicated to you, our passengers.”