The Green Apple Foundation is upcycling hotel waste in Cartagena

Globetrender speaks with Portia Hart, founder of nonprofit social enterprise the Green Apple Foundation, which is based in Colombia’s Cartagena, about how it is reducing the negative impact of tourism by setting up the region’s first glass recycling operation. Already collaborating with drinks company Diageo, she is also teaching locals how to turn waste into art.

What is the Green Apple Foundation?

Green Apple is a not-for-profit social enterprise based on the island of Tierra Bomba in Cartagena, Colombia. It is dedicated to implementing long-lasting change in the way waste and natural resources are managed by the hospitality industry in Cartagena, while creating sustainable employment opportunities for local people.

Green Apple began because one small hotel on the island wanted to change their habits. Word spread, interest grew, and Green Apple was born. We exist to reduce waste sent to landfill, encourage a circular economy, create jobs in sustainability, encourage entrepreneurship, and change the habits and mentalities of business owners and their customers.

When did you launch it and why?

We started Green Apple in May 2018 because as our Blue Apple Beach Club, on the southern shore of Tierra Bomba island, was trying to increase recycling and reduce negative environmental impacts, we realised that a lot of other small businesses were going through the same process. (Hart also set up  and the Townhouse Cartagena boutique hotel.) Green Apple is independent from Blue Apple, and so can work with companies across the city. 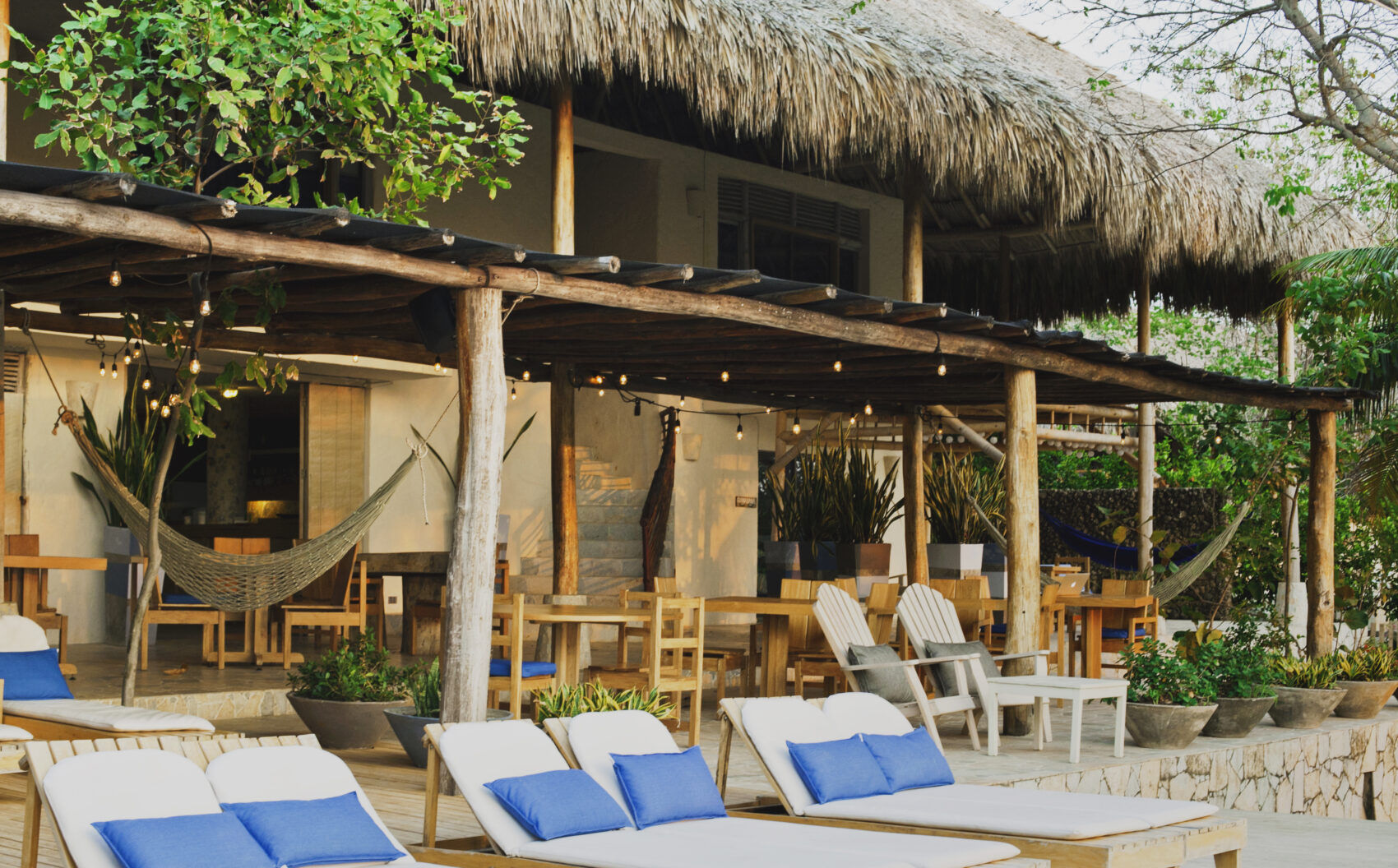 Why is it innovative?

Green Apple is the first glass recycling operation on the entire coast of Colombia. We also set about making it financially sustainable from day one. Businesses pay for services such as glass crushing, organic composting and kitchen gardens, and we sell by-products such as sand and garden produce.

The idea is that – although the profits might be too small to make this of interest to big organisations or traditional entrepreneurs – the profits are meaningful in communities where unemployment is high and many people support entire families on one minimum wage (around US$10 per day) or less.

It is a not-for-profit, but most donations are received in exchange for goods or services, which adds an element of stability which is perhaps atypical for traditional foundations here. Finally, we are never about shame. Green Apple is all about making positive changes, rather than chastising organisations and businesses for the things they don’t do.

So often, hotels, tour operators or restaurants can be intimidated by the vast amount of things we all do ‘wrong’. We aren’t telling everyone to change everything they do, just encouraging organisations and individuals to make the changes they can. Every little counts. 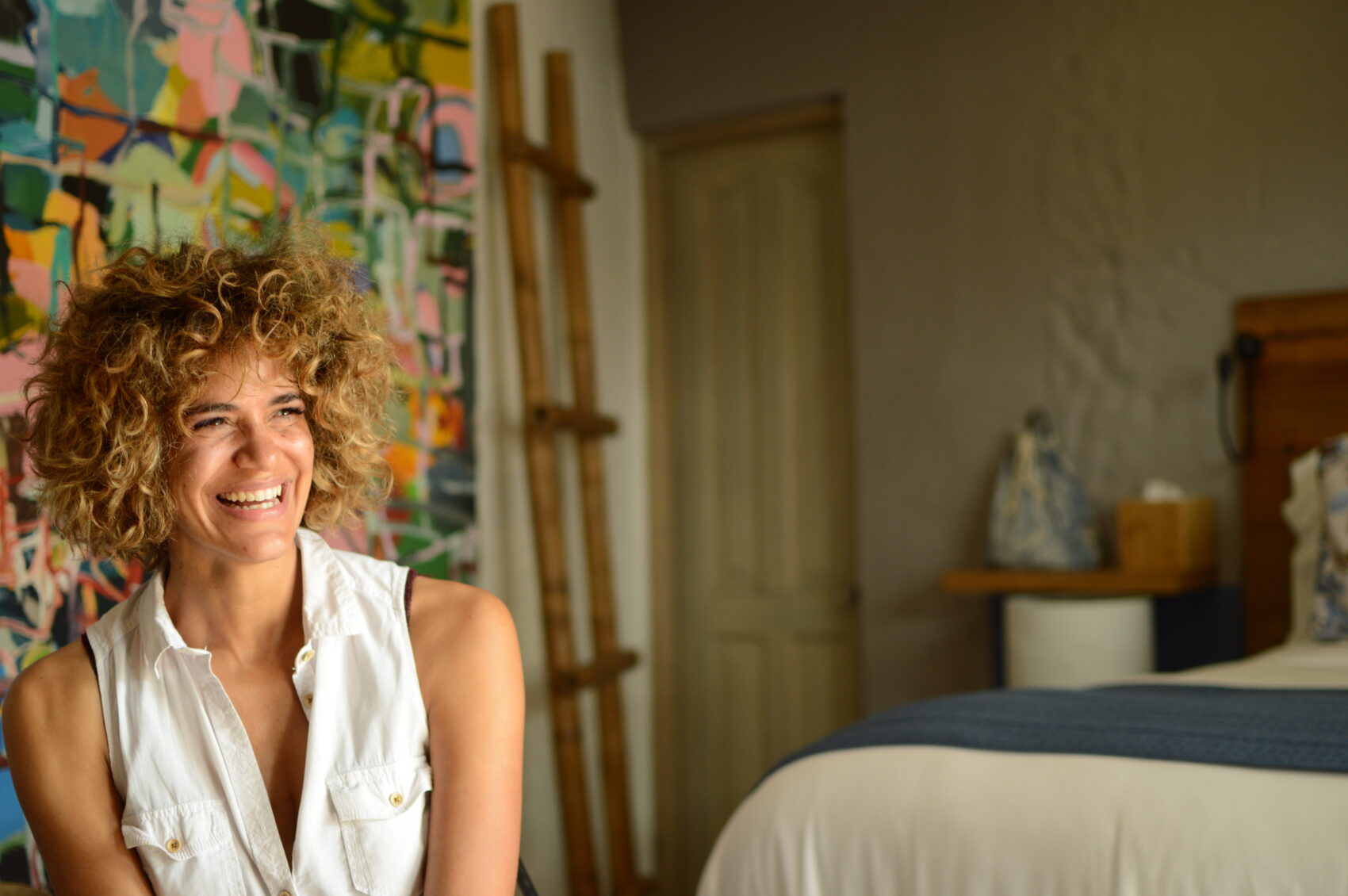 What are you hoping to achieve?

The big dream is to prove the model, so that Green Apple-like glass and organic processing centres can be replicated anywhere in Colombia (or the world) where there is an issue with waste and a lack of employment opportunity. We want to prove that the micro-model can be as impactful as a large organisation, and perhaps more efficient.

In what ways are you looking to work with big companies?

We are already working with Diageo, who contract Green Apple to destroy their used bottles as a part of their anti-counterfeit operation, as well as a part of their CSR. It’s a win-win for all sides. To us, it doesn’t matter what the motivation is, as long as the end result is a positive one.

We would love to involve more big suppliers to the tourism industry in the operation. At present, a lot of the responsibility is left to the individual hotel, bar or restaurant, which often are small, independently owned businesses with limited resources.

To see global suppliers share the role of the responsible disposal of their containers/bottles and so on, is our ultimate aim.

How are you working with local communities?

Green Apple is located next to the village of Bocachica. We have four people from the village working full time, with their salaries paid in full by income from the organisation’s operations.

Following a successful crowdfunding campaign, we recently ran a course for ten local people to learn how to create objets d’art from glass bottles, which is a skill they will have for life. Working in collaboration with another local, much larger organisation, we hope to expand Green Apple to five other nearby villages over the course of the next 24 months.

How are you hoping to change the way people travel?

Green Apple is a prominent part of Blue Apple, and is also promoted in all of our partner businesses through items on their menus. The goal is that customers and guests head out into the wider world having seen what we do, expecting other businesses in hospitality to their share as well. It’s not so much about changing how people travel, rather about changing their expectations when they do.

What have you learnt from setting up the Blue Apple Beach and Townhouse Cartegena?

Too much to list but mostly that you have to work incredibly hard, and inspire the people around you to work just as hard. Your team is what affects every client’s experience of your business, so treat them like VIPs.

On the island especially, we worked out early on that making ourselves a part of the community, rather than a ‘posh hotel’ sitting outside it with our doors closed and a security guard, was the most effective security measure we ever took. It also gives our clients an amazingly unique insight into the local community, interacting with our neighbours as equals, sharing a beer. 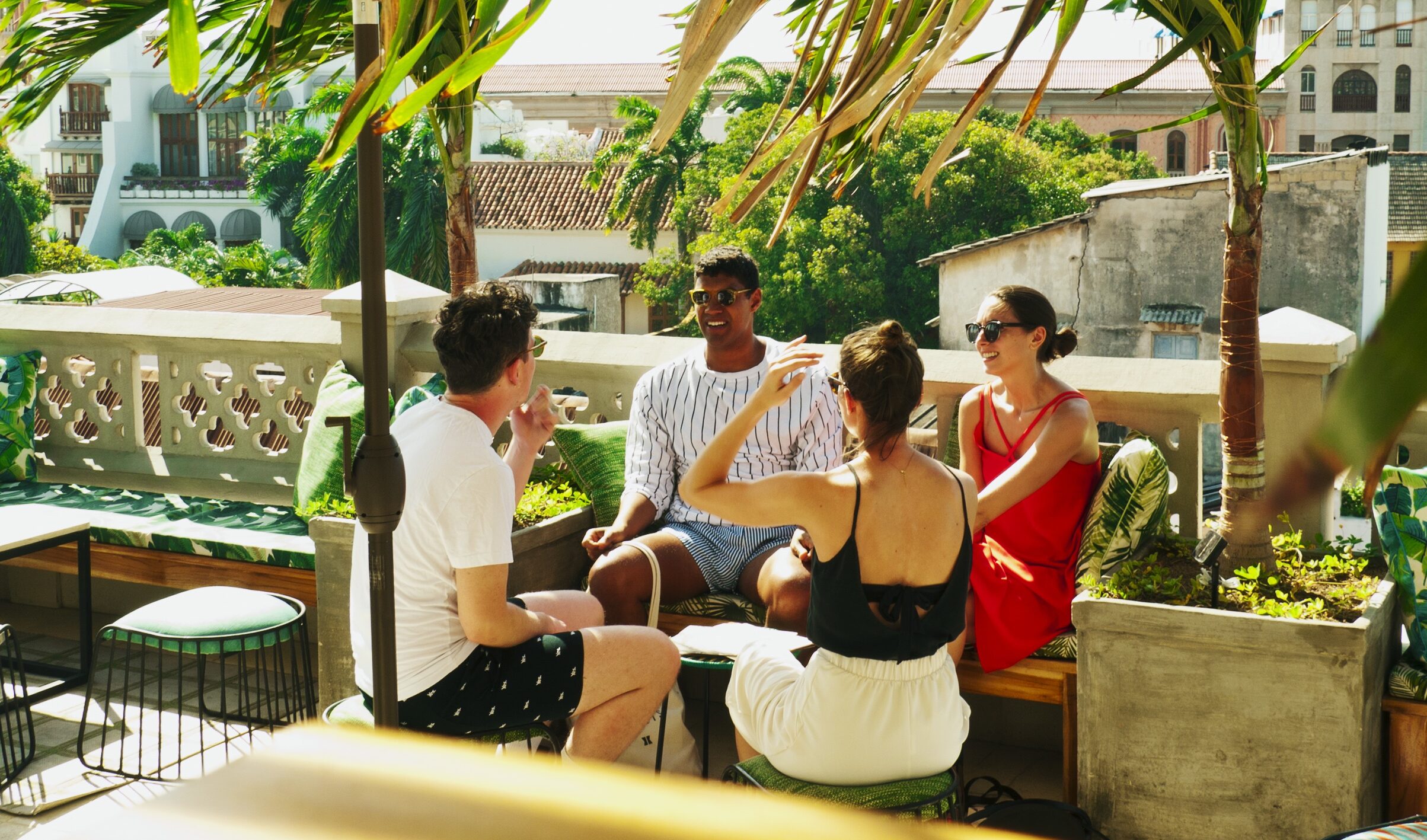 Why is conscious/ethical travel a big focus for the future? What is your role in this trend?

Conscious/ethical everything is a big focus for the future, because we are entering a stage of awareness about the effects that mass travel and consumerism have on the environment’s resources.

You don’t have to be an environmental specialist to realise that it probably isn’t a good thing to use a water bottle for five minutes then bin it, knowing it will float around the planet for millennia to come. It feels almost strange that we didn’t give this more thought before, but now there is so much conversation around the topic, it’s difficult to ignore.

We realise that one small hotel won’t change the world but our role is to positively encourage travellers and other small hotels to do the one small thing they can do, which will make a difference. So much dialogue around sustainability generates feelings of guilt or ‘not doing it well enough’.

Our role is to demonstrate the easy changes, and make people feel good about what they do achieve. 1 per cent better is still better and if you feel great about it, you might aim for 2 per cent tomorrow.

With Green Apple, we have the double purpose of enabling poor communities to generate wealth without generating more waste, promoting yet more mindless consumerism or disposable items, which feels like the best possible combination.

What is special about Cartegena as a destination?

Apart from being a UNESCO Heritage Site, Cartagena is unique in the Caribbean for the incredible amount on offer. It has a world-class gastronomy scene that only gets better every day, fantastic nightlife and, best of all, the chance to connect with local people.

This isn’t a seasonal, faceless resort, it is a living, breathing community. Combine that with year round sunshine and of course all the beaches and islands, and what is not to love about this place?

What can other travel companies learn from what you are doing?

The one thing that really surprised me with what we started, was that it wasn’t hard to make that first step. I would tell any other small business wanting to move towards sustainability to avoid making grand promises or setting headline-winning goals.

You’re probably not going to become carbon neutral or plastic free within a year, not honestly, anyway. There are so many things you don’t control (can you get your suppliers not to wrap their products in plastic?).

And if you set yourself an unrealistic goal and fail, you lose motivation. Instead, what you can do is make small changes that aren’t expensive, and start a conversation about what you’re doing with customers and suppliers.

The engagement we have had from clients, the encouragement and good PR, has all been the cherry on top of the feeling of having taken a step in the right direction. Once you start, you will wonder why you didn’t do it before.