The Vessel is a honeycomb-like network of 2,500 stairs to nowhere, a futuristic public park-cum-sculpture designed by Thomas Heatherwick as the centrepiece for New York’s Hudson Yards project. After years of waiting, it was unveiled in March, at a cost of US$150 million. Jenny Southan reports

Made from 87 lengths of carbon steel with beautiful copper-coloured cladding, the Vessel is a feat of engineering and imagination, echoing artist MC Escher’s drawings of staircases that loop infinitely. In this case, however, you really can walk up and down them, although they won’t take you anywhere.

Tickets are free to ascend and admire the views of the surrounding buildings and nearby Hudson River but visitors are limited to 700 at a time. In total there are 154 staircases and 80 dizzying landings with almost a mile of vertical climbing. Below are five acres of public plazas, gardens and groves that seamlessly connect with the High Line elevated park. 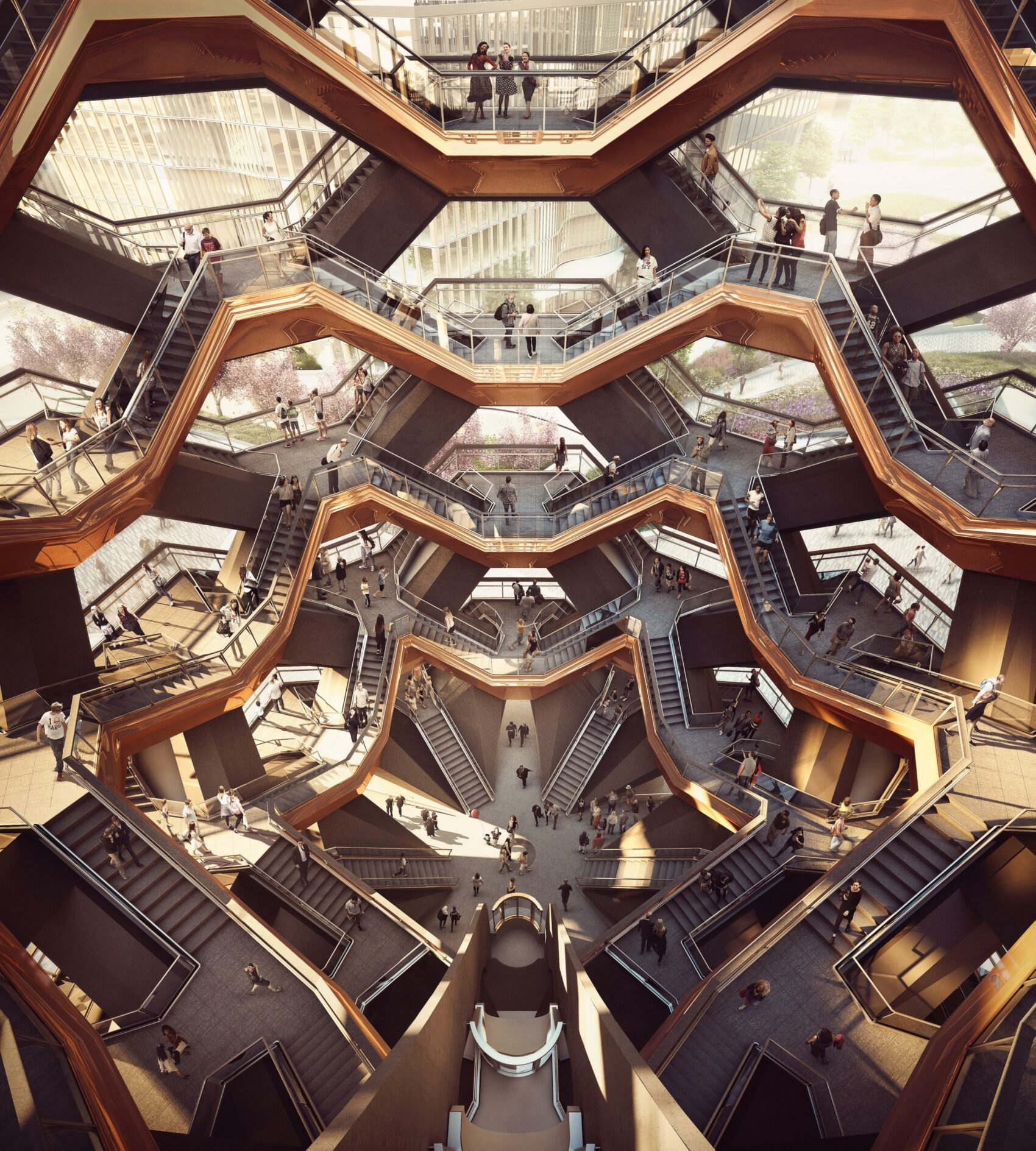 “The geometry of the project is quite mesmerizing because of it’s repetitiousness,” said Stuart Wood, a senior designer with Heatherwick Studios, the design firm behind Vessel. “Once you’re inside it, it’s really calm. You’re in the middle of New York, and yet, it’s calm.”

The maze-like structure stands at the heart of America’s most expensive real-estate project ever – Hudson Yards, in Manhattan’s West Side, which cost US$25 billion. However, when complete, it will contribute almost US$19 billion annually to New York City’s GDP.

“A model for the 21st-century urban experience, Hudson Yards is an unprecedented mix of buildings, parks, utilities and public spaces that combine to form a connected, responsive, clean, reliable and efficient neighborhood,” says the developer, Related. LEED-certified from the ground up, phase one is now complete, with phase two coming in 2024. 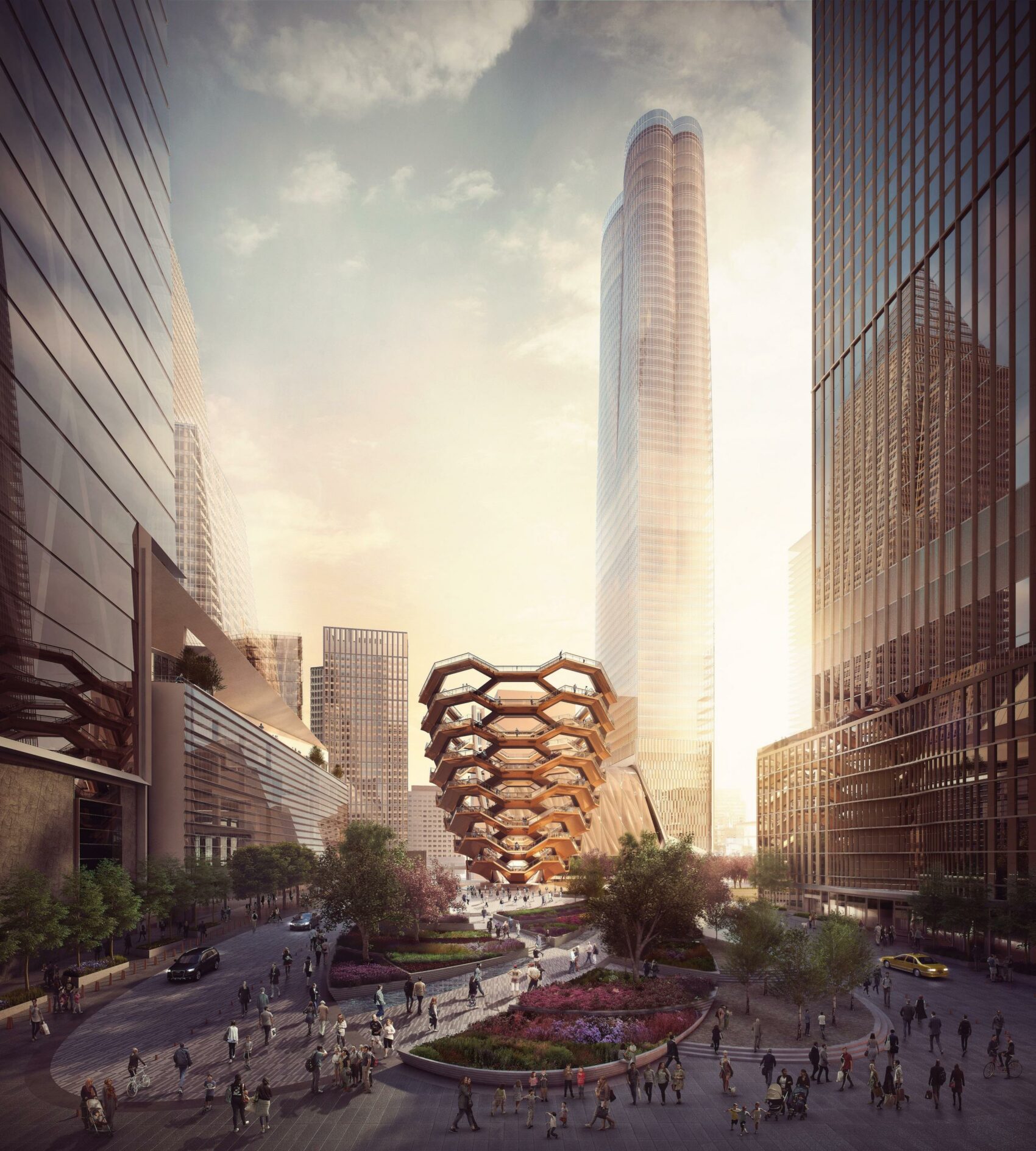 The first part of the project had its grand opening on March 15, and is comprised of numerous buildings including the Shed, which is a huge cultural space with a remote controlled roof that retracts, and 10 Hudson Yards, an office tower that is connected to the High Line park. It houses companies such as Sidewalk Labs and L’Oréal USA. WarnerMedia is based out of 30 Hudson Yards, another commercial tower.

There is also a mall in which 100 stores such as Zara and Watches of Switzerland are located. 15 Hudson Yards is a 300-apartment block with a rooftop lounge and co-working space, while 35 Hudson Yards is where the new Equinox hotel and gym (opening in June) will be found. Meanwhile, 55 Hudson Yards is rumoured to be leasing office space to Apple. 50 Hudson Yards is home to BlackRock’s world headquarters.

The Edge, the highest outdoor observation deck in the Western Hemisphere, is expected to arrive in early 2020.

Congressman Jerrold Nadler said at the opening: “The one word that best describes Hudson Yards is ‘transformative’. This project is not a stand-alone development – it is the creation of a new, mixed use neighbourhood, including public parks, cultural institutions, affordable housing and thousands of jobs.”