Travel search engine Kayak has revealed 80 data-based formulas for getting the cheapest flights possible based on the time and day you book, and the season you want to go away in.

The analysis of data from more than a billion online searches has shown that British travellers can save in excess of 70 per cent on ticket prices, equating to savings of more than £600 to cities such as Los Angeles.

Travelling during the week instead of over a weekend (from Wednesday to Monday, for example) is a common trick for getting cheaper rates, but Kayak has revealed more specific recipes for low-cost flights to ten top European and international destinations. 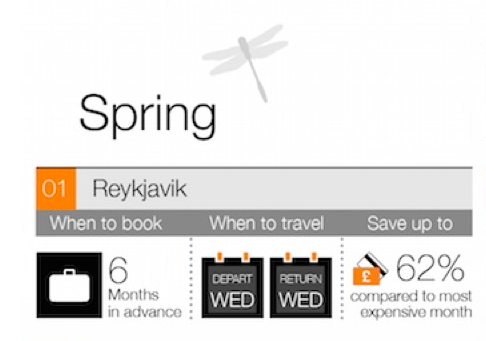 Kayak says: “Travelling on weekends remains fairly expensive compared to weekday travel during all seasons and to most popular destinations, with Tuesday and Wednesday most frequently appearing as the best outbound days to score the lowest airfares. In the spring this applies to Reykjavik, Malaga, Alicante, or Santa Cruz de Tenerife.”

Finding the cheapest flights also comes down to the exact hour that they are being searched for. Kayak says: “While booking in the early morning (4am) for travel in summer can save travellers up to 42 per cent, Brits wanting to book a flight for spring should do so at 11am, with potential savings of up to 66 per cent.

“Trips for autumn and winter should be booked in the afternoon to save up to 56 per cent on airfares when compared to the most expensive hour to book.”

Loella Pehrsson, regional director of Kayak for the UK, Ireland and the Nordics says: “At Kayak we are obsessed with using our tech know-how to give calculated advice to our users so they can make better travel decisions.

“Our analysis provides a profound insight into how far in advance travellers should buy their tickets to the most popular destinations this year for different seasons, allowing users to plan and manage trips with confidence.”

Flights from the UK to Europe: by season

Kayak says you should book four to six months in advance for spring holidays from the UK to top European destinations such as Reykjavik, Malaga and Barcelona.

For example, if you want to fly to Palma de Mallorca in April, the best time to book is in December, at 11am, departing on a Monday – Kayak says this can save you up to 75 per cent in comparison to the most expensive booking month (£50 versus £200).

If you want to travel in the summer, you should book seven to eight months before departure, for savings averaging up to 71 per cent (compared to the most expensive period) to places such as Dalaman and Larnaca.

For autumn trips to places such as Luqa and Ibiza, book nine to eleven months ahead of departure, with savings of up to 74 per cent.

The optimal time to book winter holidays to destinations such as Amsterdam and Geneva is two months in advance – flights to Lanzarote, for example, are up to 76 per cent less.

Flights from the UK to international destinations: by season

People wanting to travel to top international cities such as Vancouver and Bangkok in the autumn need to plan the furthest in advance – up to 11 months before departure.

Those looking to go to popular international destinations such as New York and Miami in the spring, need to book three to four months ahead. For example, a flight to Los Angeles can be up to 60 per cent cheaper, at just ￡422 four months in advance, compared with ￡1,043 in the most expensive month.

Summer travel to places such as San Francisco and Las Vegas should be booked seven to eight months in advance, with the exception of Dubai, which can be booked six months ahead.

For winter trips, you need to reserve tickets four to five months before departure for destinations such as Auckland, Mumbai and Hong Kong, with savings of up to 68 per cent.