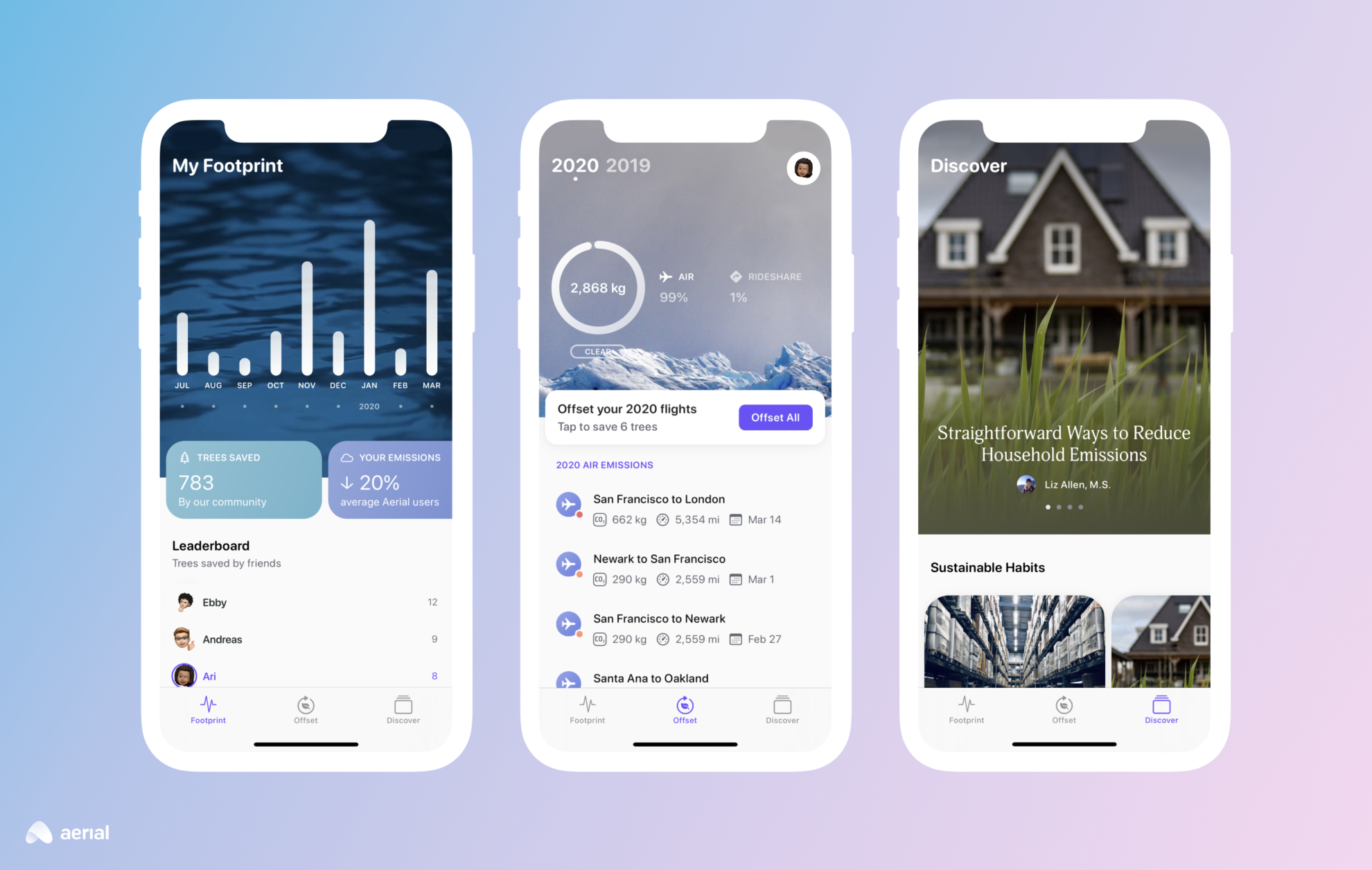 A new iOS app, launched in mid-October, allows users to calculate their net carbon footprint from transportation, and offers offset options at the touch of a button.

Named Aerial, the app links to Gmail and scours past emails for flight reservations, rideshare receipts, and train tickets to estimate carbon emissions, in kg, per trip.

“After a couple minutes using the app, users will be able to calculate their carbon the same way they might do their calories or their steps,” co-founder Ebby Amir tells Fast Company.

With Environmental Protection Agency estimates that 28 per cent of all US greenhouse gas emissions are from transportation, Aerial’s creators hope the app can raise awareness about individual actions. The platform also suggests contributions to carbon offset initiatives at the rate of US$10 a tonne.

“A nice analogy is: the same way Instagram turned everyone into a photographer, we want Aerial to turn everyone into taking climate action,” Amir says.

Offset proceeds benefit a forest conservation project in McCloud Forest, Northern California, where 9,000 acres of cedar and pine are held under conservation easements. Aerial founders chose the site for its well established top canopy. Scientists agree that older trees sequester – or capture – more carbon than younger trees, such as those planted via reforestation projects.

According to Aerial, North American forests offset up to 19 per cent of US carbon emissions. Conservation funds also help to protect existing natural habitats for wildlife in the region.

The project is verified by Climate Action Reserve, the self-proclaimed “premier carbon offset registry for the North American carbon market”. The Reserve establishes standards and oversees verification for carbon offset projects, and has a publicly-accessible records database of carbon credit transactions.

To date, Aerial users have saved 494 trees and offset almost 250,000kg of carbon emissions. With a combined background in Google, Microsoft, and Facebook, Aerial’s three co-founders hope to soon expand the app to include additional emission types, such as home utilities.

Another planned development is a choice of offset partners, so that users may pick a project that resonated with them. Potential options include geographically-specific reforestation or sustainable energy activities.

Though travel is limited during the pandemic, users can calculate and offset past trips retroactively. By using data from previous emails, individuals can also compare their transportation footprint between years, and compare their personal emissions with friends or the average Aerial user.

A “Discover” tab also shares tips on building sustainable habits and scientific articles that provide context on the impact of transportation emissions.

On a global scale, 20 fossil fuel companies produce about 35 per cent of all carbon emissions. It is widely accepted that carbon offsetting and individual actions, alone, are not enough to halt global climate change.

What’s more, Aerial can only provide an estimate for limited types of carbon emissions. Personal car journeys are not tracked, and other home, work, and consumer-based emissions are not included.

“We do recognise that carbon offsetting has its limitations,” co-founder Andreas Homer told Fast Company, “but at the same time, we think it’s the easiest way for most people to get involved and to start doing their part.”