Swimming pool manufacturer Compass Pools has designed the world’s first 360-degree infinity pool to sit on top of a London skyscraper. But how do you get in or out? Samuel Ballard reports

The concept, named Infinity London, uses a submarine-style door to access the pool via the floor. It would hold 600,000 litres of water and sit on top of a 55-storey, 220-metre-tall building.

The walls of the pool would be made of acrylic, rather than glass while part of the floor would also act as a skylight.

“We faced some quite major technical challenges to this building, the biggest one being how to actually get into the pool,” explained Alex Kemsley, Compass Pool’s swimming pool designer and technical director.

“Normally a simple ladder would suffice, but we didn’t want stairs on the outside of the building or in the pool as it would spoil the view – and obviously you don’t want 600,000 litres of water draining through the building either.

“The solution is based on the door of a submarine, coupled with a rotating spiral staircase which rises from the pool floor when someone wants to get in or out – the absolute cutting edge of swimming pool and building design and a little bit James Bond to boot.”

According to Business Insider, Kemsley said that the staircase would work like “a tube in a tube”. “The first tube is to ‘cut a path’ through the water and create an airlock. The second to deliver the staircase up to water level.” (This isn’t visible in the rendering they have released though.)

The pool also features an in-built anemometer to monitor wind speed. This is linked to a building management system that keeps the pool at the right temperature and ensures water isn’t blown on to the street below.

The pool also uses the waste energy from the building’s air conditioning system to heat it. Construction could start as early as next year.

Infinity London isn’t the only concept pool that architects have designed for the capital.

In 2015, the Sky Pool was revealed as part of the forthcoming luxury Embassy Gardens development on London’s South Bank, near the US Embassy in Nine Elms, which opened in 2018. 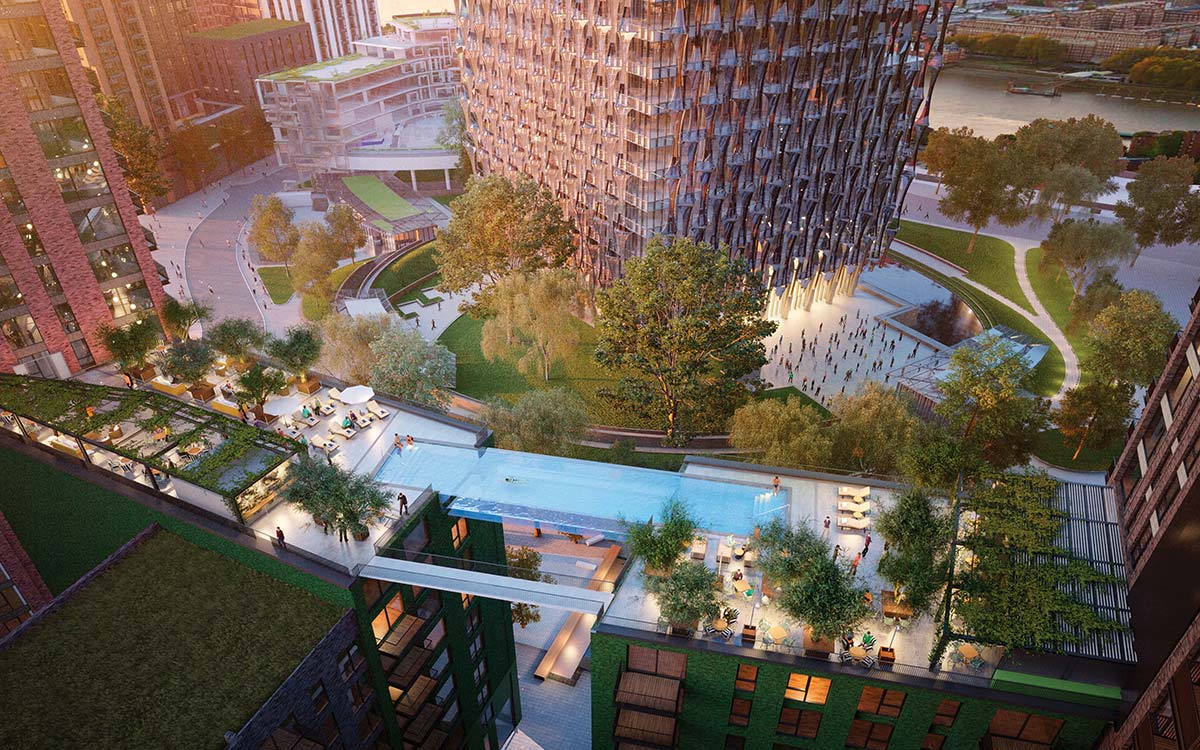 Sean Mulryan, chairman and CEO of developer Ballymore Group, said: “My vision for the swimming pool stemmed from a desire to push the boundaries in the capability of construction and engineering, I wanted to do something that had never been done before.

“At Ballymore we like to push the boundaries on all aspects of design – the Sky Pool’s transparent structure is the result of significant advancements in technologies over the last decade. The experience of the pool will be truly unique, it will feel like floating through the air in central London.”

Brian Eckersley, director of Eckersley O’Callaghan, Sky Pool structural engineer, added: “Once you swim off, you can look right down. It will be like flying.”