Liechtenstein, which has a population of just over 38,000, has had 183 confirmed Covid-19 cases in total with one death. The current rules for Liechtenstein, which follow Switzerland’s lead, state that any tourists entering the country from high risk areas must report their arrival and stay in a hotel or rented apartment and self-quarantine for ten days.

I am currently based in the Netherlands, one of the countries on the mandatory quarantine list. Not fancying the idea of being cooped up for ten days, plus the bill at the end of my stay in the notoriously high-priced country, a friend tipped me off that transiting through the place would still be possible.

I checked with the local authorities in Liechtenstein and was told this would be fine if we did not stop and were merely passing through. Determined to make the weekend a real adventure, I came up with a plan to make my transit on rollerblades, an activity I loved during my childhood and revisited during lockdown. 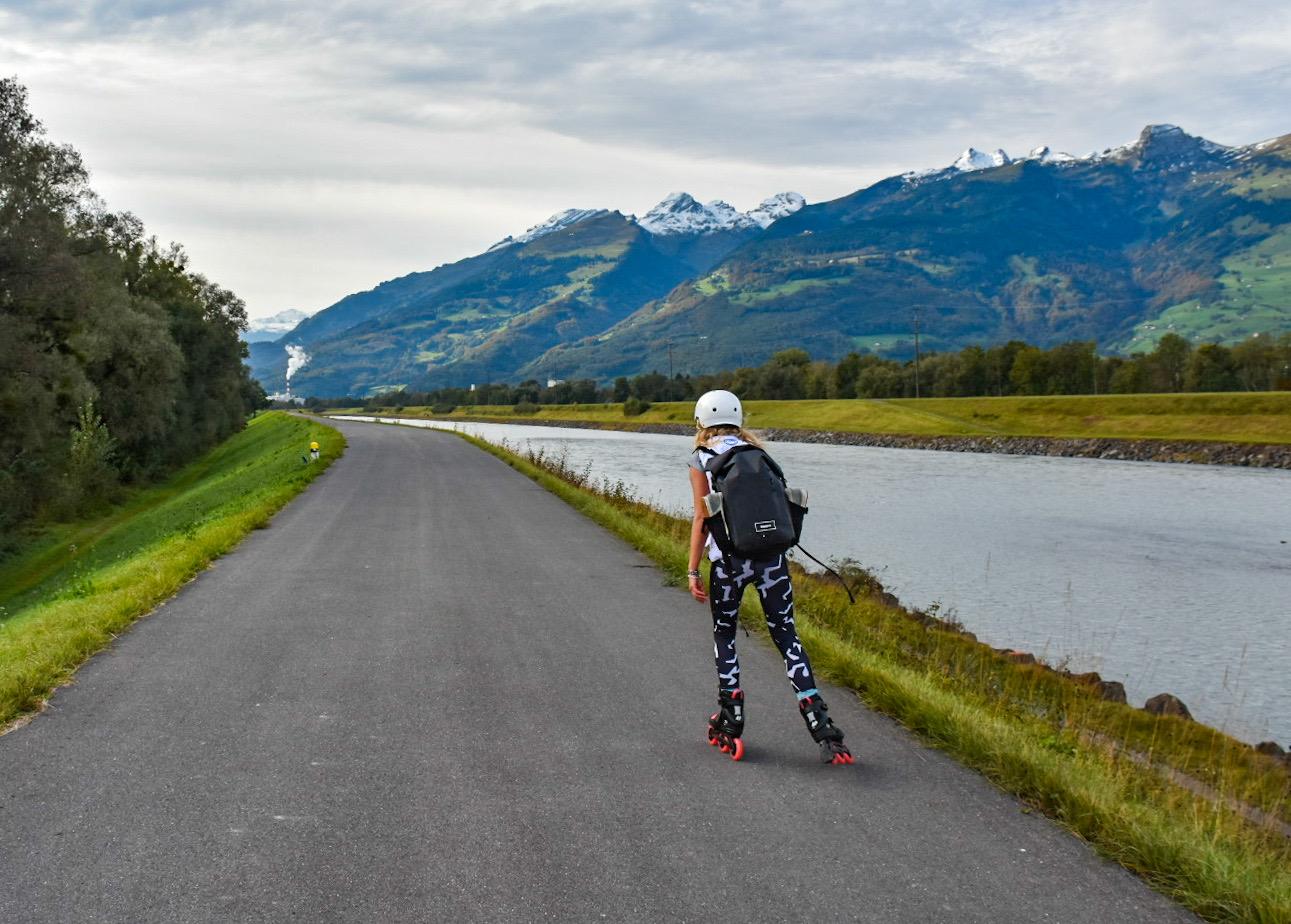 Wheeling along on skates would enable me to soak up the mountainous scenery while maintaining social distance. I let the local authorities know of my plans and they gave it the green light.

My friend and I found a route running the length of Liechtenstein. The course, just short of 18 miles, ran from Austria where we would camp to the southern tip bordering Switzerland. We would then arrange return transport from there.

We drove some ten hours from the Netherlands to the Austrian-Liechtenstein border where we set up camp for the night. The next day, we got up at 7.30 am sharp. Thankfully the weather was pretty splendid, with the sun peeping through and temperatures tipped to reach 18 degrees Celsius.

We were unsure what our skating route would be like and if the track would be navigable on wheels, but we set off to walk through the morning dew to the borderline and go from there. We were pleasantly surprised to find a finely tarmacked track, the smoothest I’d encountered in a while.

Another thing we were relieved about was the lack of border police, although we weren’t on a main road. The UK government’s foreign travel advice website states that “inspections may be in operation” but the coast was clear and we could start our transit without being quizzed. 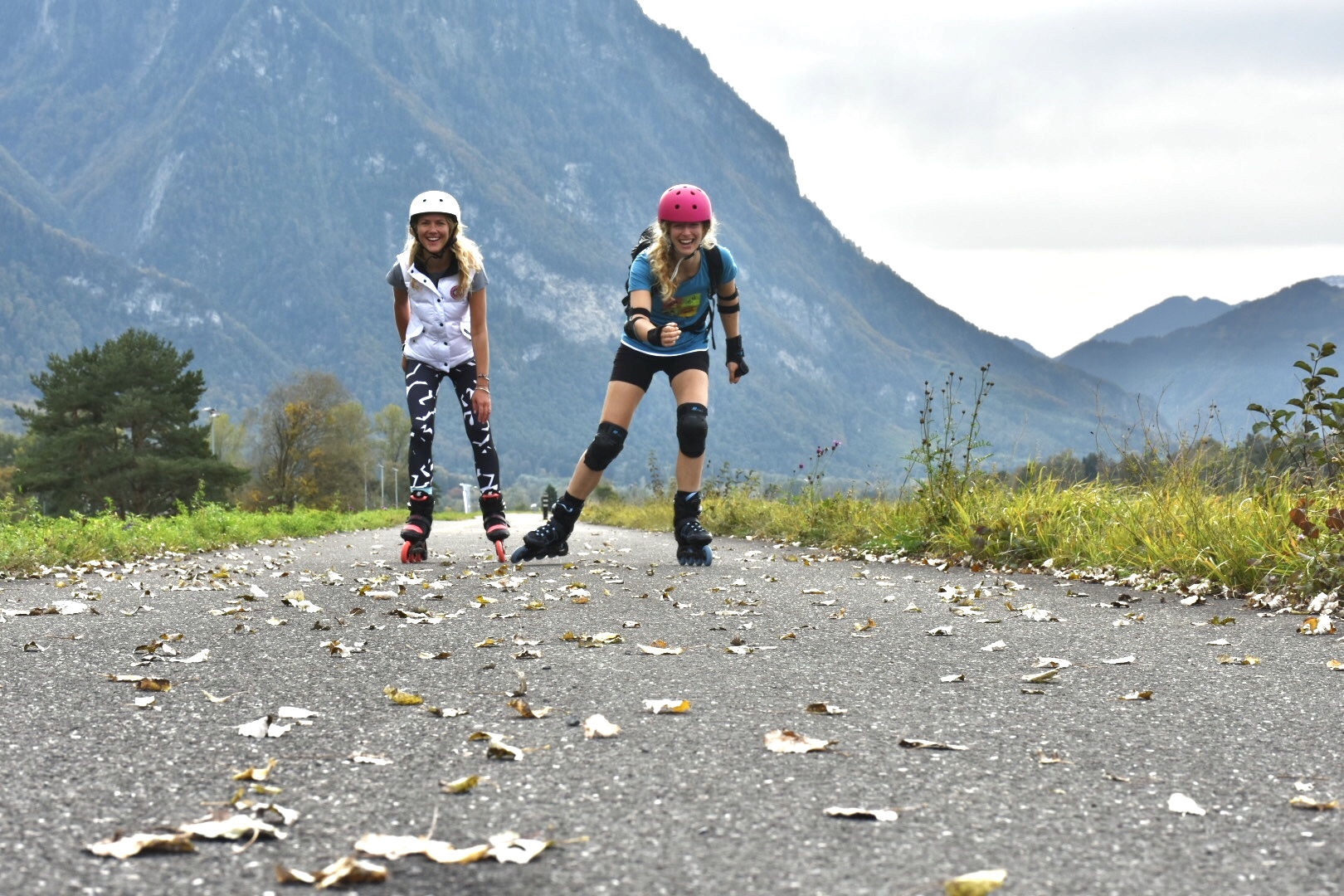 With the skies clearing, and the snow-frosted mountains gleaming in the distance, we steadily started wheeling along. The great thing we discovered about the track, which is also used by cyclists and cars at certain points, is that it is very flat, making it perfect for rollerblading.

There were only a handful of downhill bits where we had to wheel through underpasses and sweat our way back up again. Passersby on bikes and foot gave us inquisitive smiles as we wheeled by on our bright pink and blue skates.

Along with the mountainous scenery, the fast-flowing Rhine river that ran alongside us was another source of entrancement. Occasionally we caught glimpses of Liechtenstein’s fairytale-like interior with breaks in the trees lining the other side of the track giving way to church spires and tiled rooftops.

We also got a good look at Vaduz Castle which dates back to the 12th century. The grand building, perched 120 metres above Vaduz, the capital of Liechtenstein, is the palace and official residence of Hans-Adam II, the current Prince of Liechtenstein.

Another historical feature we came across during our skating expedition was the Alte Rheinbrücke, a covered wooden bridge linking the municipalities of Vaduz in Liechtenstein and Sevelen in Switzerland.

Spanning 135 metres, it was completed in 1901 to replace a previous bridge and today it’s the only remaining wooden bridge spanning the Rhine.

Eventually, we saw on our GPS that the end was in sight, and we upped our pace a little. After turning a corner, passing some cornfields and a picture perfect farm with cattle grazing in the front paddock, we reached a small car park where our return ride was set to pick us up.

We completed the 17.98-mile journey in two hours 34 minutes with an average speed of seven miles an hour. We hadn’t got to explore Liechtenstein as thoroughly as we’d hoped, but we’d had an awesome time transiting through the country soaking up the sights, smells and sounds.

It was a charming journey I’ll remember for years to come. I’m glad we didn’t let Covid-19 completely scupper our plans.

It was my first roadtrip since the pandemic hit, and it was interesting to see that none of the borders were monitored as I feared they might be. There was nothing to stop people with Covid-19 driving in and out of places.

With it being impossible to contain people, I guess the most important thing as a traveller in today’s climate is to take responsibility for your own actions and not to put others in danger. But there is still lots of adventure to be had, even transiting through a country can be fun.