What’s it like travelling in Greece during a global pandemic?

After cancelling an initial holiday to one of the blacklisted Greek islands, author Drew Davies finally made it to Greece for a summer break, despite ever-changing travel advice from the authorities. This was his experience…

There was a lot of pressure riding on my holiday to Greece this year. My fiancé is Greek (I’m British), so every summer we head over from the UK to visit his family and to relax, but obviously 2020 is very different. After months isolating at home, our upcoming trip had extra weight and significance – without it we would likely go insane, and perhaps kill each other. No pressure then.

Like everyone going on holiday this year, I was desperately looking forward to my trip with equal amounts of blind hope and growing dread. With rules changing every day, it seemed like a game of Russian roulette as to whether we’d actually get on the plane to Athens at Stansted, in the final weekend of August.

Already our plans had been scuppered once – we were originally planning to go to the Greek island of Zante (Zakynthos) and had even booked an Airbnb – but with headlines in the UK decrying the island as a Covid-19 hotspot, we’d decided not to go (we got half of our accommodation money refunded through Airbnb, and the rest as a voucher to use in the next two years from the accommodation owners).

Instead, we would fly into the capital and take it from there. Hopefully that would allow us to be flexible, get “boots on the ground” information from the locals about where was currently the best and safest places to visit, while getting a feel for the country’s situation before making any more decisions.

What made you decide to book a trip to Greece?

My fiancé is from Pireas (the port of Athens). We usually travel out of season each year if we can, and so we thought September was a good choice this year. But then Covid-19 cases started to rise in Greece in August, and we wondered if we’d made a good decision leaving our trip so late in the summer.

Next year – all being well – I would suggest going to the more popular touristy destinations in May to mid-July, and then looking for less popular places/islands from mid-July to September to avoid Covid-19 hotspots.

How long were you staying for?

Two weeks. As we left the UK, the question of travellers returning from Greece having to self-quarantine for two weeks was being hotly discussed in the media, but to be honest, we were so desperate for a change of scene, we felt it was worth the risk – even if we had to isolate on our return (and fortunately both my partner and I can work from home). 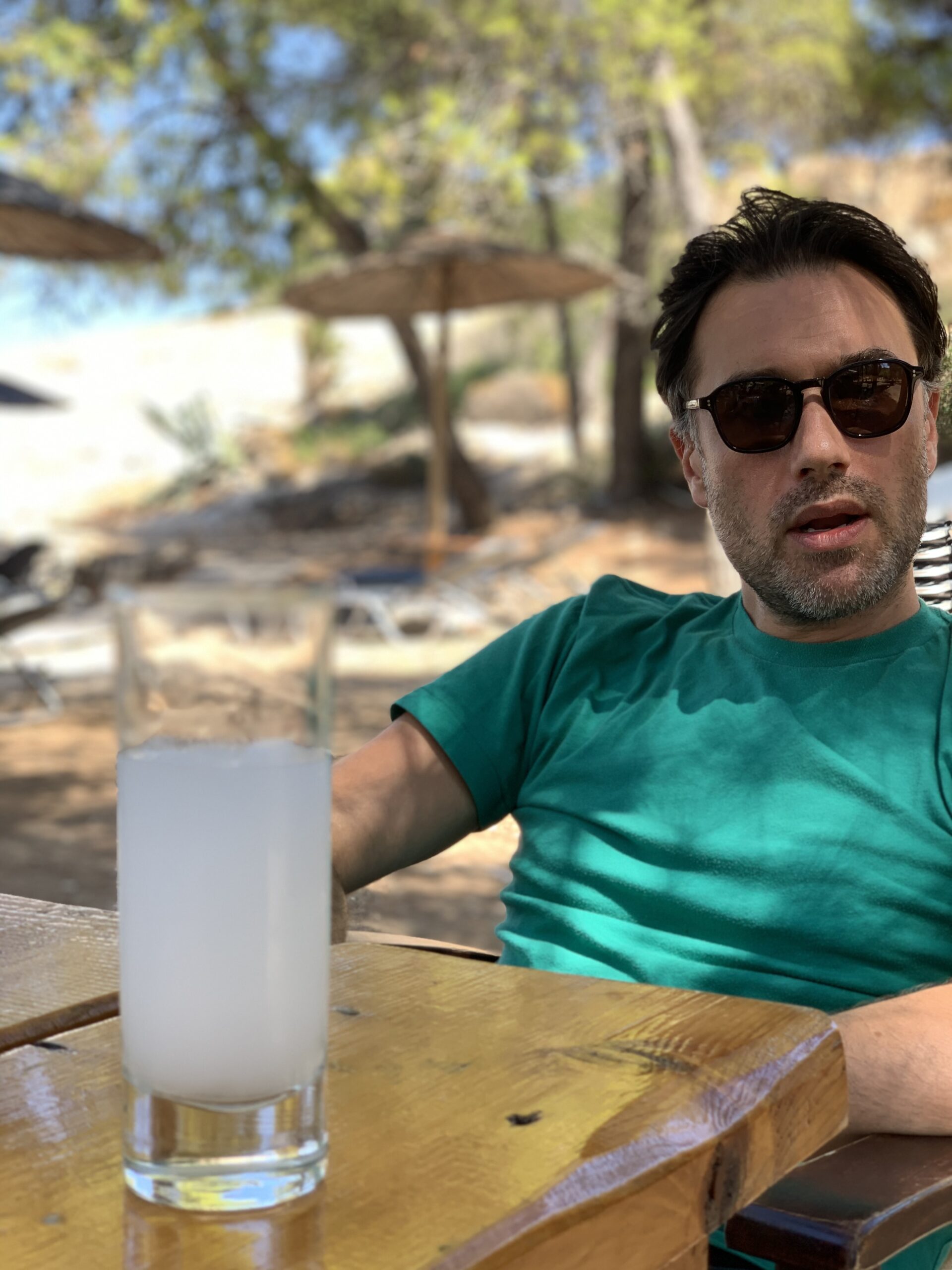 Where were you staying?

Athens initially. In the lead up to leaving the UK, we both took Covid-19 tests hoping that our negative results would help us expedite the arrival process in Greece. Our flight was on the Sunday in the middle of a bank holiday, so Stansted airport and our plane were pretty quiet, which was excellent.

The only hitch was remembering to take down your mask when they looked at your passport photo when we checked in our suitcases. The Ryanair flight attendants on the plane were extremely nice and professional, and everyone seemed to be following the rules and wearing their masks. Having extra empty seats on the planes helped socially distance.

When we arrived at Athen’s airport we encountered a problem – my partner and I hadn’t yet received a confirmation of the required online PLF form, so we were taken to one side and asked to fill in the form again manually.

It was our mistake, however, as my fiancé hadn’t refreshed his email, and when he did the confirmation came through, and after a few questions, they let us through. We didn’t see anyone tested for Covid-19 at the airport (it was midnight when we landed).

We stayed at an Airbnb in the centre of Athens. There was a well-organised self-check in system, which seems to be pretty common with the city’s holiday rentals. After catching up with family and friends in the capital, we decided to go to a couple of islands, choosing Hydra and Spetses because they were close to Athens (one and three hours travel by ferry, respectively) – in case anything did happen.

What’s the situation with quarantines for Greece on arrival and return to the UK?

While we were away, Scotland took Greece off their safe list. Then on September 7, England announced it was about to put seven islands on the self-quarantine on return list: Lesvos, Tinos, Serifos, Mykonos, Crete, Santorini and Zakynthos.

Fortunately, we’d already cancelled our trip to Zakynthos because it didn’t feel like a safe option. The two islands we did visit were still tourist destinations but not as popular as the islands listed above, and that choice paid off.

On our return to the UK, we had to declare which islands we’d been to in Greece, but we were surprised there were no checks. Hypothetically, we could have gone to one of the blacklisted islands to and from by ferry, and then taken the plane home from Athens and no one would the wiser if we didn’t declare it. My partner and I both commented at the time that it felt very lax.

What kind of travel insurance do you have?

I’d forgotten all about travel insurance, so fortunately my partner bought some for us both – a Europ Assistance travel insurance policy through Ryanair (he purchased it with our plane tickets).

Did you have any concerns about the trip?

Yes, of course – it was scary leaving the UK for the first time in a pandemic. Due to our cancelled trip to Zankanthos, I’d felt we had kicked off our trip on the wrong foot, but nothing could be further from the truth…

Greece was amazing – sunny and relaxed as always, without the constant UK media hysteria (my fiancé backed me up on this, it wasn’t just because I didn’t understand the news).

What was so reassuring is that everyone wears a mask in Greece. Strict fines mean that everyone follows the rules (unlike in London where it seems at least 25 per cent of people consistently flout mask wearing). Literally every single person wore a mask on public transport in Athens (sure some of them didn’t cover their nose, but you can’t have everything).

On the ferries and taxis, masks were mandatory too. Hand sanitiser could be found on most restaurant and café tables. Obviously, most eating and socialising is done outside, so it feels much safer. My only gripe is that some of the masks worn by waiters looked like plastic visors that didn’t really cover the nose and mouth appropriately, therefore, and seemed tokenistic (we joked you’d probably be as protected wearing lip gloss), but they were in the minority, most people wore regular face coverings.

Why did you choose not to have a holiday in the UK?

We wanted to see family too so it seemed like a logical risk. I think if we didn’t have a connection to a country, we definitely would have stayed in the UK.

How much did your ticket cost?

In July, we booked return Ryanair tickets to Athens with a 20kg checked back for £190 each.

How was the flight different to normal?

We didn’t notice a huge difference to other Ryanair flights. Our outgoing flight was very quiet, so there was a lot of space. Our return flight was much busier, and especially on the plane – passengers were having a hard time keeping socially distanced.

For example, as we disembarked, you’d still get the sort of person who tries to physically push in from behind. A pandemic doesn’t change human behaviour I suppose. There were a couple of older passengers who had gone full visor/mask/gloves – they looked like extras from Mad Max, but hey, when you’re safe, you’re safe.

Was there any testing on arrival?

We were expected to be, but no. Our temperature was checked before we could get on the Stansted airport bus in London though.

No sunbathing in masks. Restaurants, bars and clubs are open, but had to close at the 12pm curfew when were visiting, and apparently this is changing to 10pm soon.

Drew Davies is the author of three novels (ideal for taking on holiday): The Shape of Us, Dear Lily, and With or Without You, available to buy on Amazon.