Airbus has revealed three concepts for what it hopes will be the world’s first zero-emission commercial aircraft. The project, codenamed ZEROe, could see eco-friendly aircraft in service by 2035.

According to Airbus, each concept represents a “different approach to achieving zero-emission flight, exploring various technology pathways and aerodynamic configurations” to achieve decarbonisation. Key will be using hydrogen as the main fuel source.

“This is a historic moment for the commercial aviation sector as a whole and we intend to play a leading role in the most important transition this industry has ever seen. The concepts we unveil today offer the world a glimpse of our ambition to drive a bold vision for the future of zero-emission flight,” says Guillaume Faury, CEO of Airbus.

“I strongly believe that the use of hydrogen – both in synthetic fuels and as a primary power source for commercial aircraft – has the potential to significantly reduce aviation’s climate impact.” 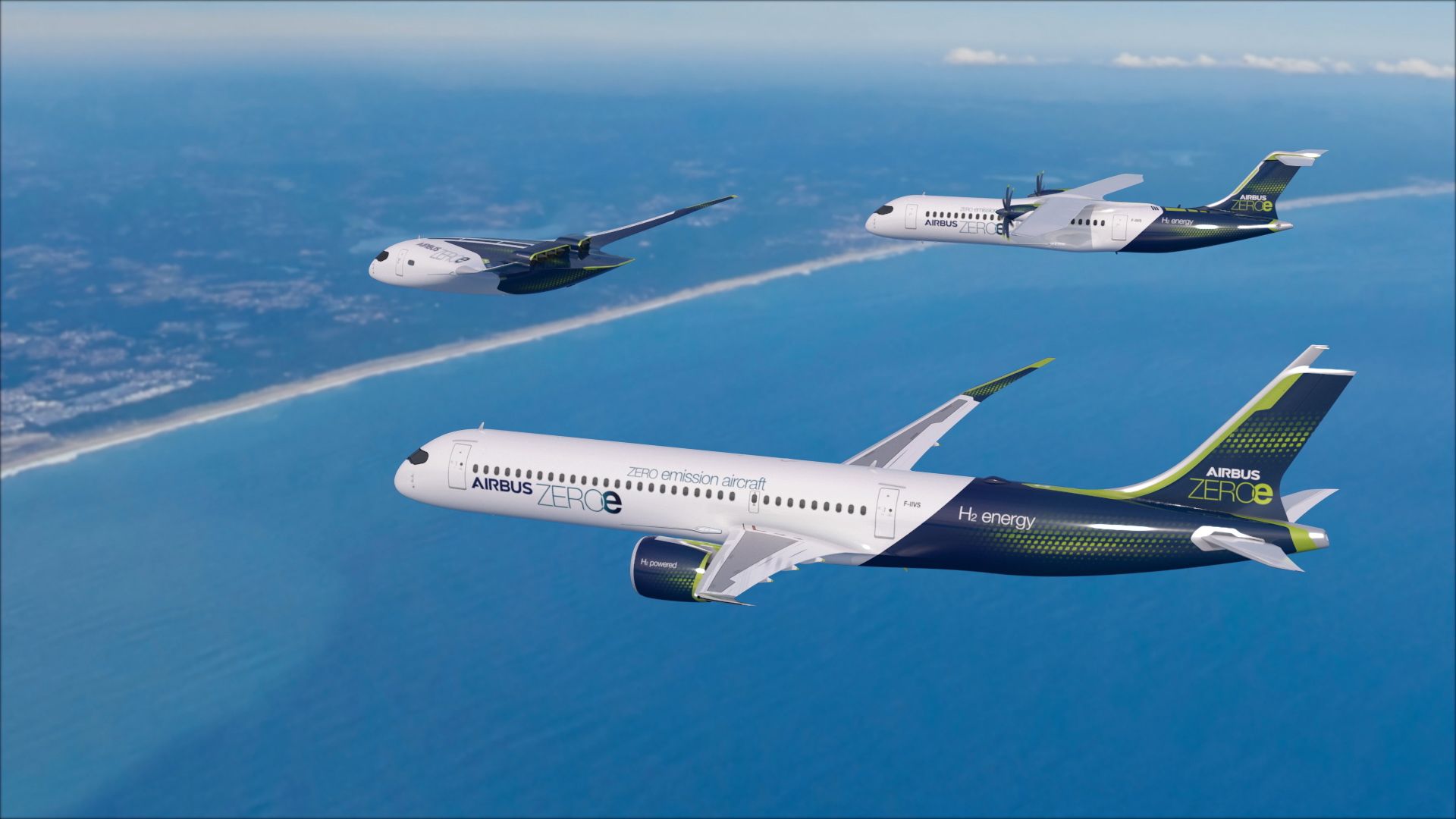 The first ZEROe aircraft will be able to hold between 120 and 200 passengers and will be powered by a gas-modified turbine engine running on hydrogen, rather than jet fuel. It will have a range of more than 2,000 nautical miles

The second ZEROe aircraft, which will feature a turboprop design, will be capable of carrying up to 100 passengers and fly for more than 1,000 nautical miles.

The third aircraft – the most visually innovative – uses a “blended-wing body” design and will be able to carry up to 200 passengers. The wings merge with the main body of the plane, which means it will be able to achieve a range similar to that of the turbofan concept.

The exceptionally wide fuselage will open up multiple options for hydrogen storage and distribution, and for cabin layout, according to Airbus.

“These concepts will help us explore and mature the design and layout of the world’s first climate-neutral, zero-emission commercial aircraft, which we aim to put into service by 2035,” says Guillaume Faury.

He says: “The transition to hydrogen, as the primary power source for these concept planes, will require decisive action from the entire aviation ecosystem. Together with the support from government and industrial partners we can rise up to this challenge to scale-up renewable energy and hydrogen for the sustainable future of the aviation industry.”

Harry Boneham, aerospace and defence associate Analyst at GlobalData, offers his view: “This announcement signals that Airbus recognises the environmental impact of commercial aviation and is realigning to conform to a market in which consumers demand climate responsibility.

“It has been identified that zero-emission aircraft with a range of up to 1,200 nautical miles will reduce airport NOx emissions by 60 per cent, reduce fuel use and direct CO2 emissions by 40 per cent, and account for 80 per cent of all departures. Given that the capabilities of these models exceed this threshold, Airbus has positioned itself in a commanding position for the medium and long-term market.

“Additionally, that the passenger capacity is comparable to contemporary narrow-body aircraft such as the A320neo and B737 MAX, is also encouraging. This will make for an easier transition from these older models to the zero-emission designs, as it will be a straight swap with little adaptation to fleet size and flight frequency necessary.

“In order not to lose market share, particularly in the narrow-body segment, Boeing must now develop its own low emission offerings. Ultimately, these developments are positive for the industry, pushing it in a direction which is sustainable and aligns with shifting passenger demand.”

Airbus is one of a number of companies that have announced their ambitions when it comes to decarbonising flying. Earlier in the year, Lufthansa said that it would be developing jet fuel from concentrated sunlight that would help reduce emissions.

Electric Aviation Group, a Bristol-based company, has revealed plans for it to launch the first 70-plus seater hybrid electric regional aircraft by 2028.