Review: Flying with British Airways out of Heathrow during a pandemic

On July 10, England lifted its ban on two-week quarantines for arriving passengers. On the same day, Globetrender took a flight out of London Heathrow with British Airways. Jenny Southan reports

I had taken a chance to book a flight two France for myself, my partner and our two-year-old daughter a couple of weeks before the lifting of quarantine was announced. At that time, I could see travel restrictions lifting and was able to self-isolate on arrival and on return if needed.

I arrived at London Heathrow via Sixt Taxi, which I booked instead of an Uber because I thought it would be more hygienic. The driver was wearing a mask (although it appeared loose), and I cleaned the seat and seat-belt buckle with sanitising wipes before I got in.

One of the key trends Globetrender identified in its Travel in the Age of Covid-19 report was Germaphobia. I definitely felt much more anxious than usual about flying and was armed with plenty of anti-bacterial wipes and hand sanitiser, as well as three different kinds of masks. 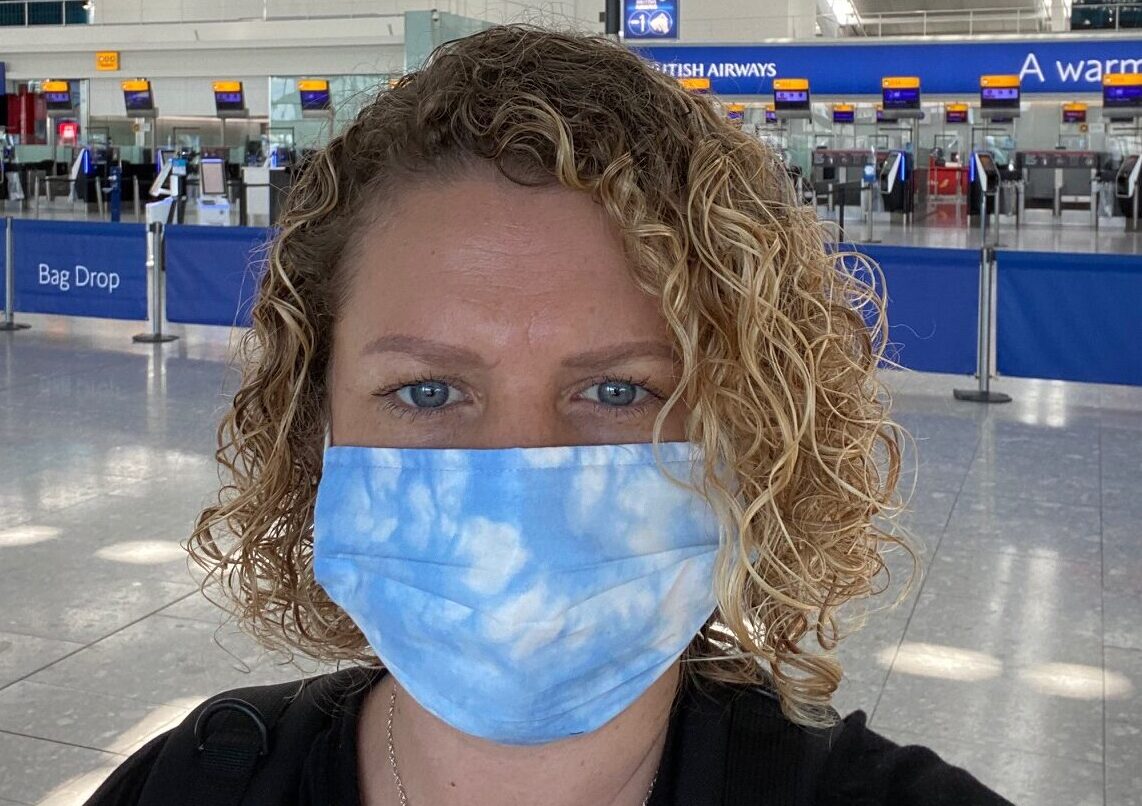 I arrived at Heathrow Terminal 5 three hours before my flight at 1400 to Toulouse in France. (When I booked over the phone, using flight credits from a previously cancelled BA flight, I was told to allow extra time at the airport.)

All flights at Heathrow are now operating out of Terminals 2 and 5 following the temporary relocation of airlines from Terminals 3 and 4. So in addition to British Airways, there were also American Airlines departures.

Before entering the terminal I cleaned my hands at one of the hand-sanitising stations in the entrance, and wore a mask the entire time (as I had done for the car journey). 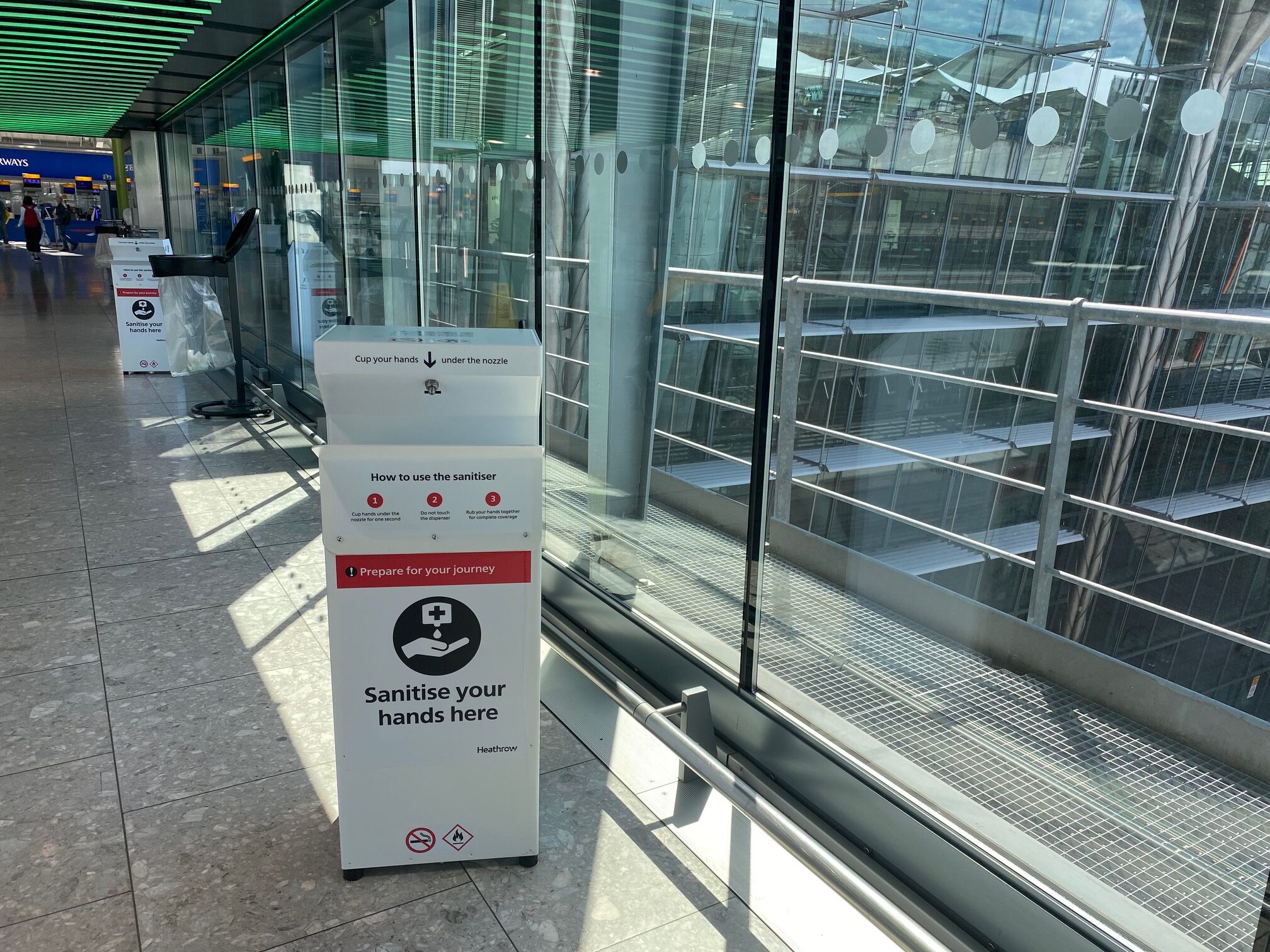 Most other passengers were wearing a mask (if you don’t have one and are over 11, you will be given one) and most staff, although our BA check-in agent wasn’t (although she was behind a screen).

The airport was very quiet, with most (if not all) shops and cafes closed landside. 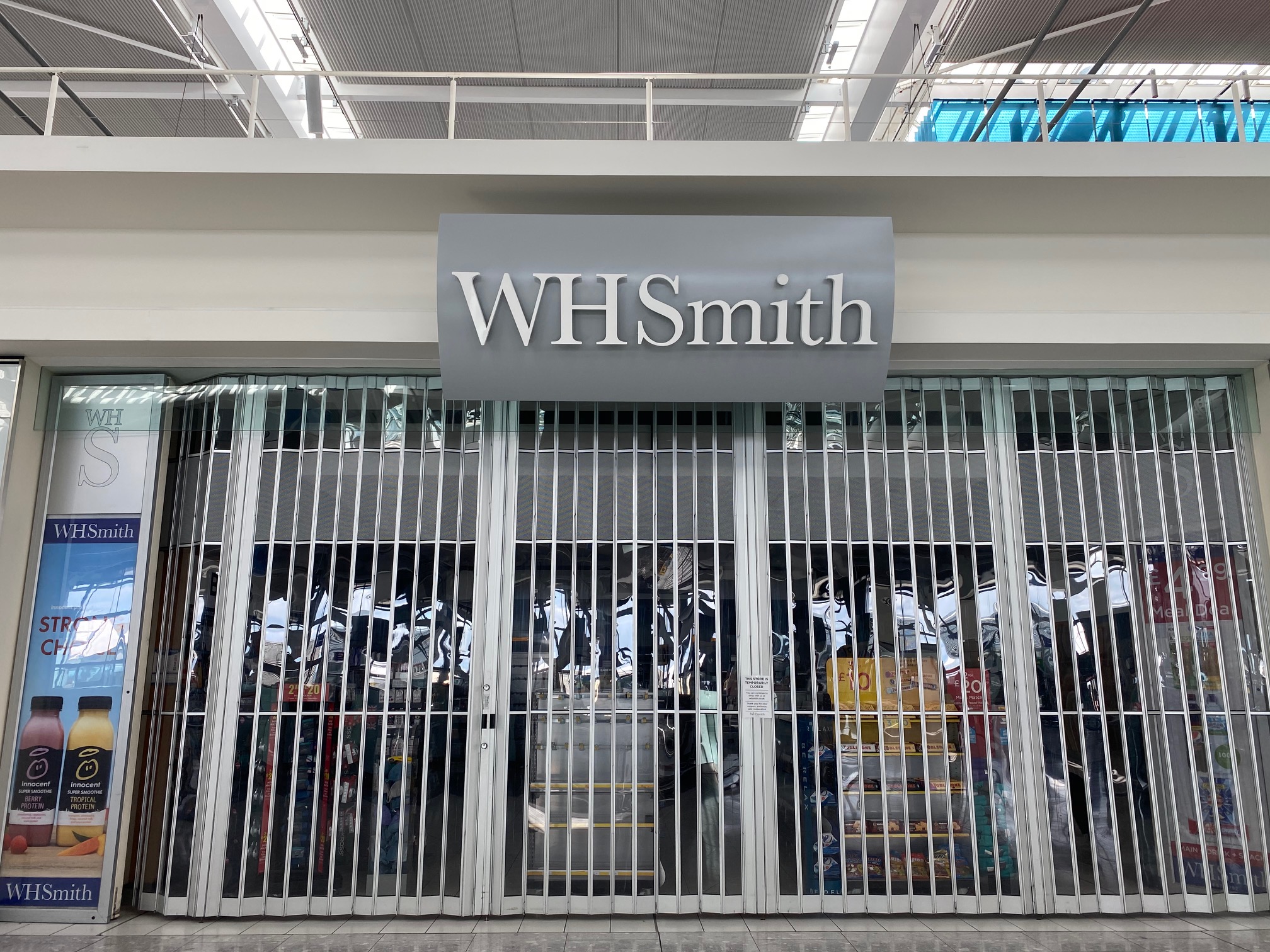 There were screens explaining the various procedures the airport was implementing to make flying safer, including the use of thermal cameras. (My temperature wasn’t taken, however, to my knowledge.) 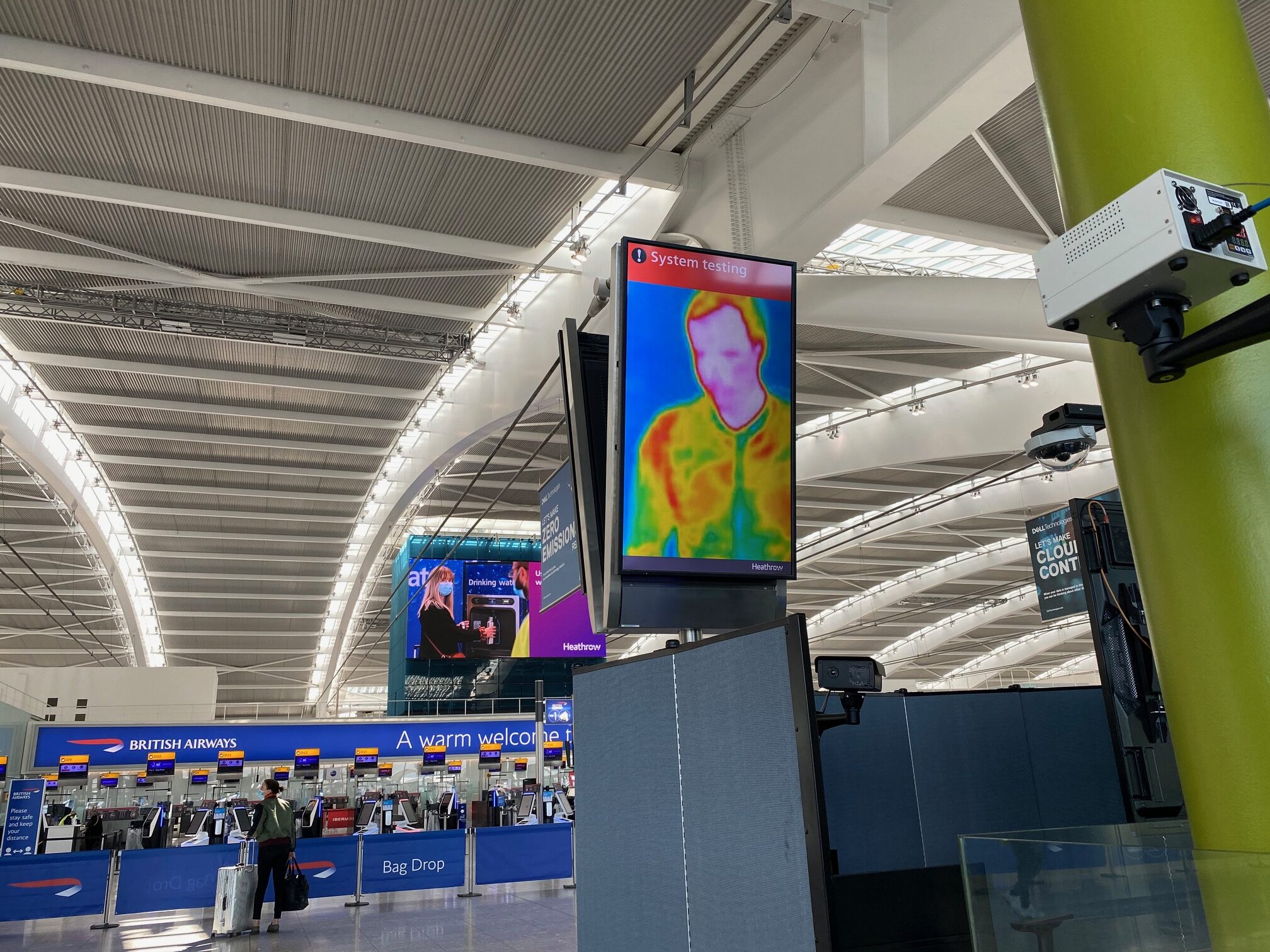 Lots of public seating was blocked out to allow for social distancing, although this wasn’t the case airside, once through security, which I thought was an odd inconsistency.

Lanes for check-in, which had to be done manually rather than electronically (we couldn’t download boarding passes), were wider than normal and there were signs to keep apart from other travellers. 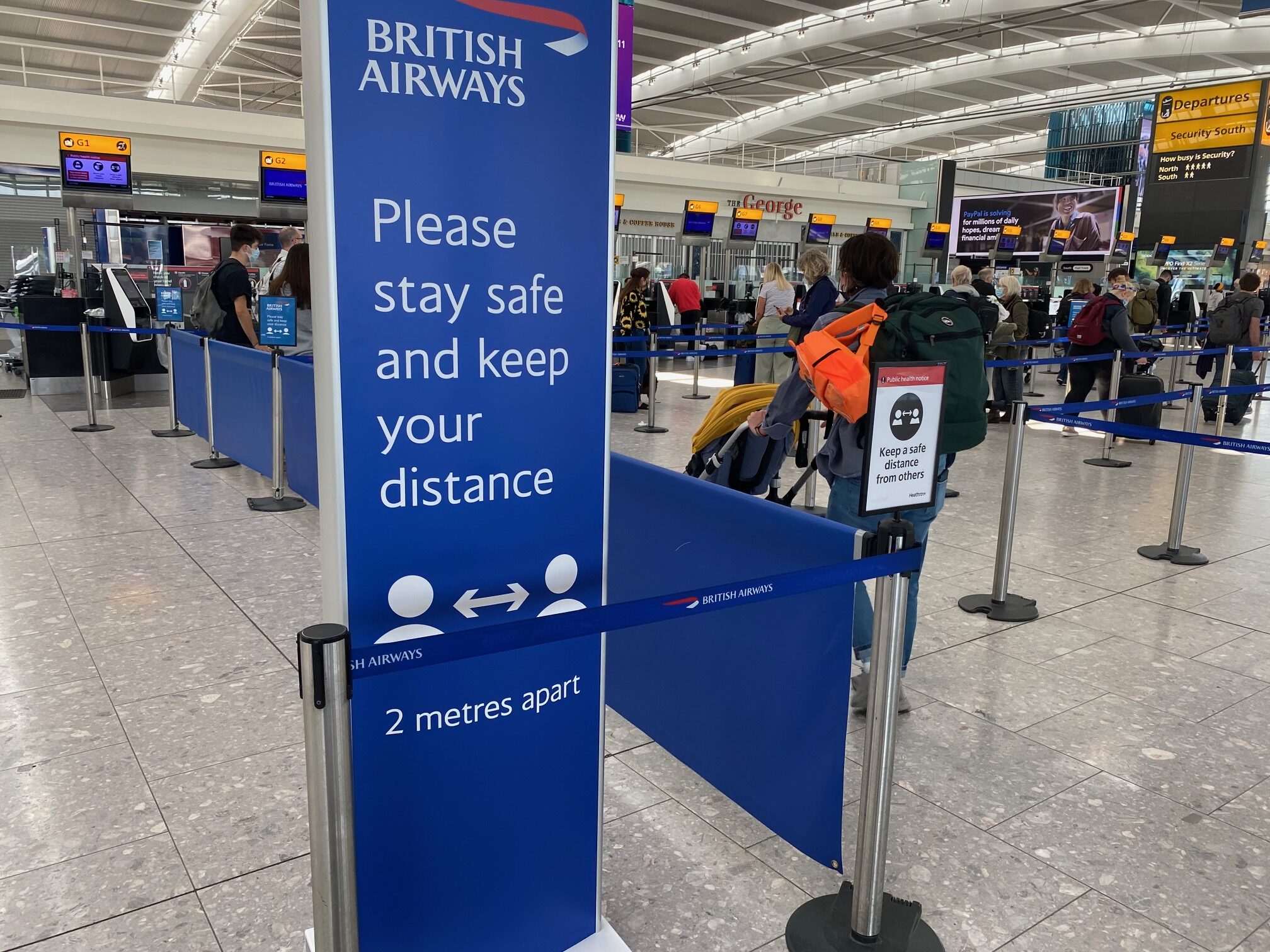 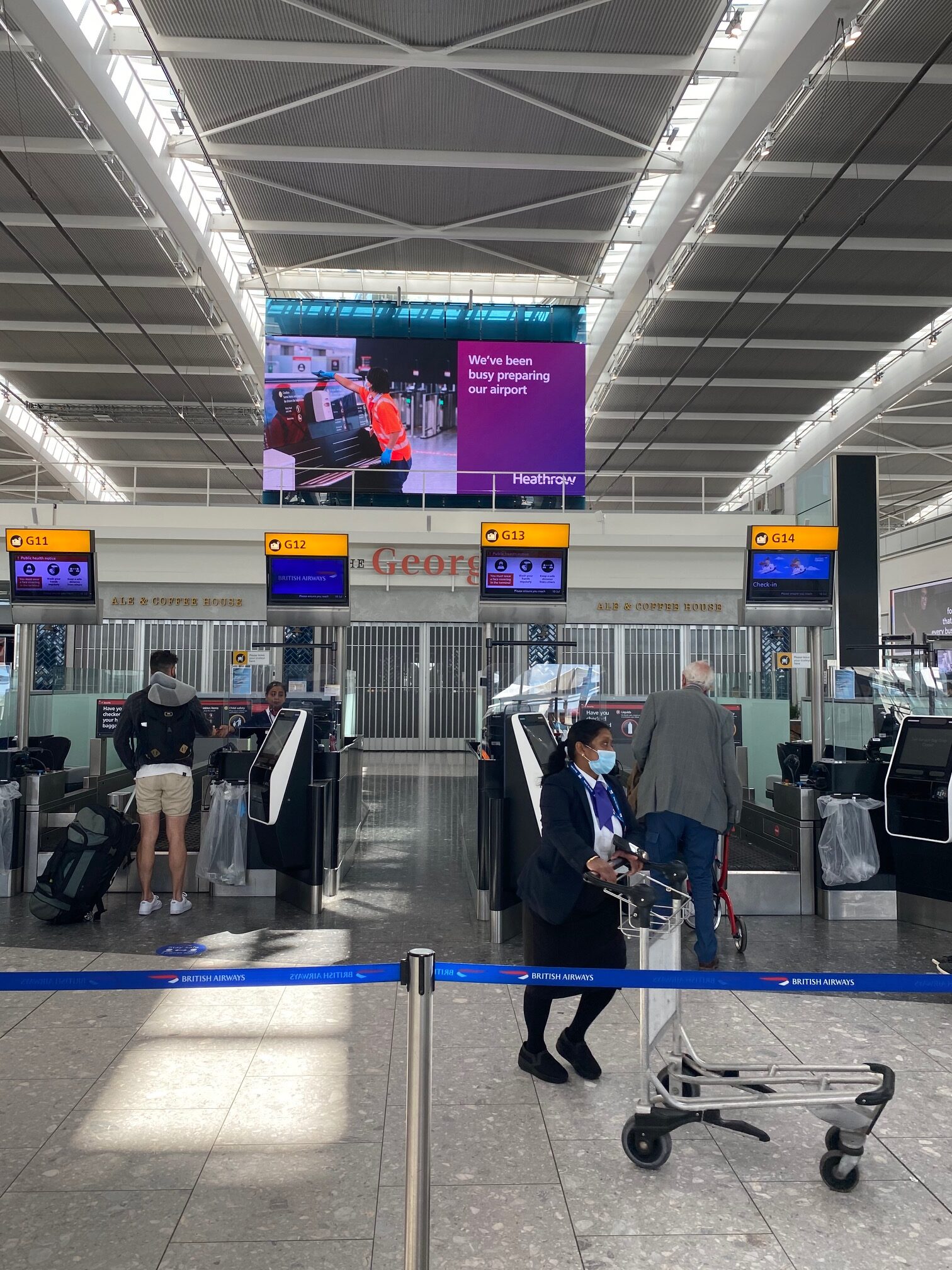 In a recent statement, Heathrow highlighted a host of other Covid-fighting measures it was taking: It said: “The airport has kicked off a number of pioneering technologies including UV cleaning robots which use UV rays to quickly and efficiently kill viruses and bacteria at night.”

It also said: “UV handrail technology is being fitted to escalators to ensure continuous disinfection of the moving handrails; and self-cleaning anti-viral wraps are being fitted to security trays, lift buttons, trolley and door handles, aiming to provide long-lasting protection from COVID-19. The wraps work by coating high-touch surfaces in a material with long-lasting anti-viral protection.” 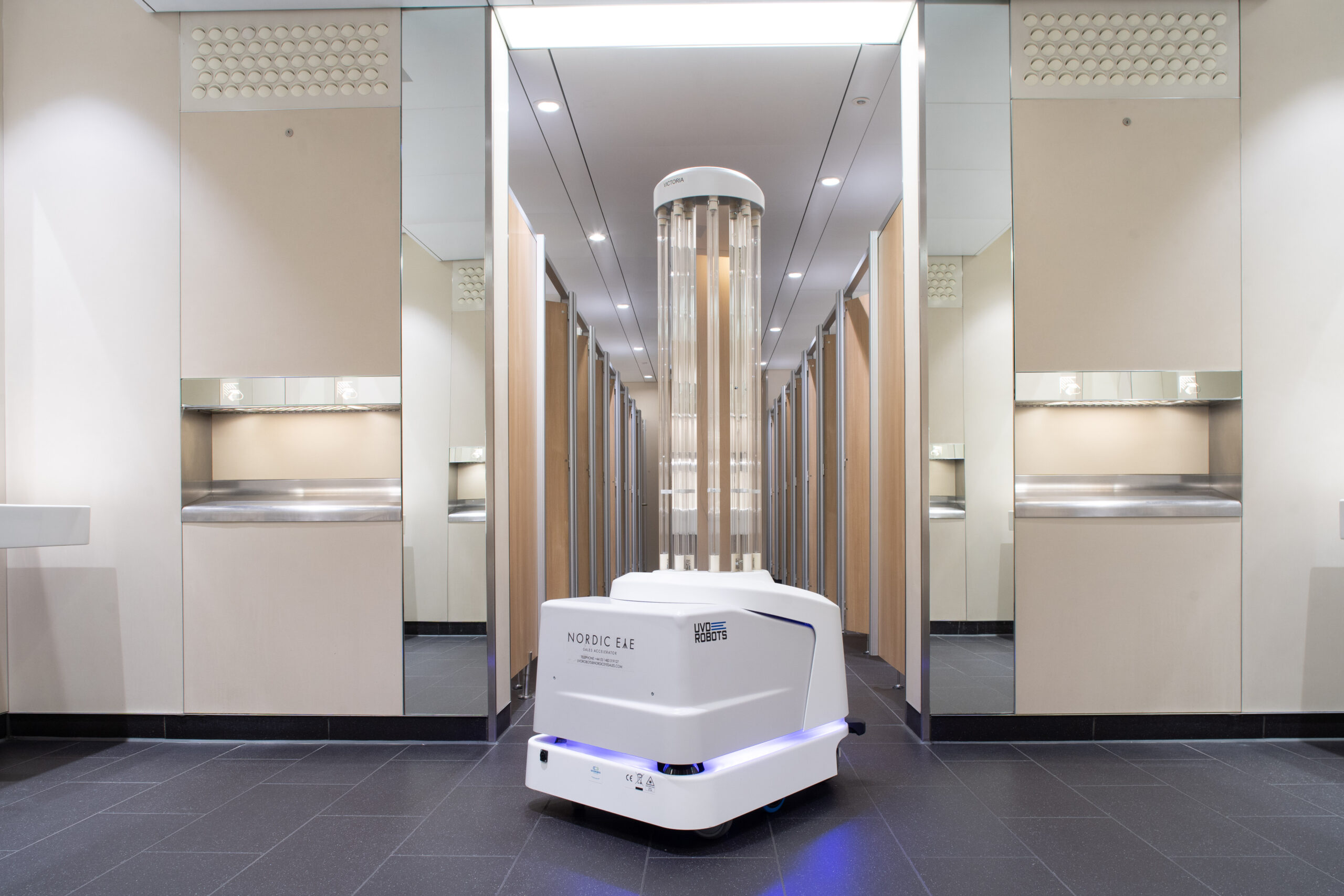 Once we had our paper boarding passses and had checked in our luggage, we went to security and put liquids into clear plastic bags as normal.

There was another manual document check here (although the officer was wearing gloves) and I had to briefly remove my mask to be identified. I used another public dispenser on the wall to sanitise my own hands (passengers don’t need to wear gloves).

Security was almost empty so there was very little in the way of queuing. The procedure was well organised and there were signs saying body scanning could be a requirement (presumably instead of a physical pat-down). I was able to pass through without an issue. 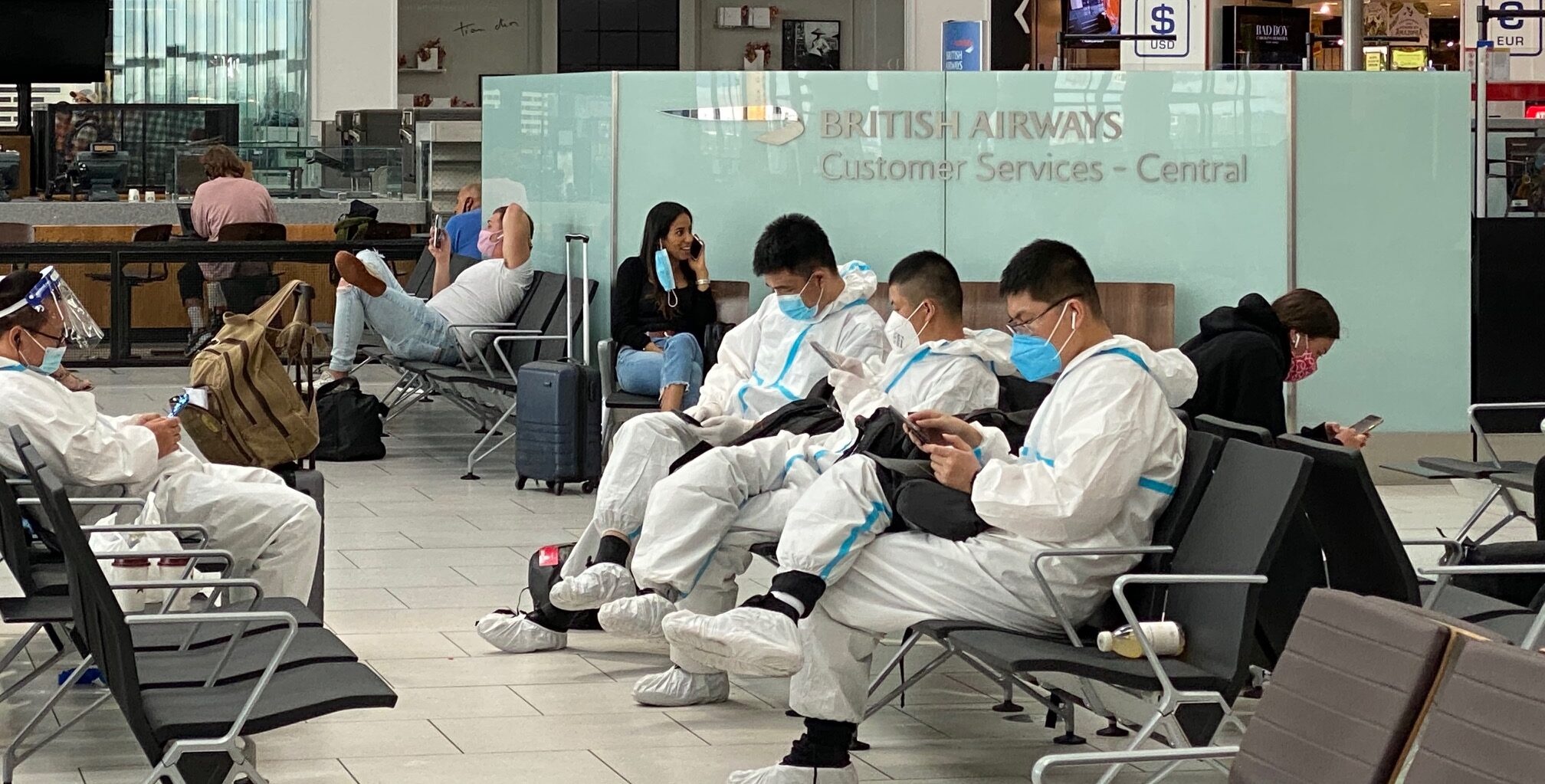 Once airside, I had to do a live interview with BBC radio 5Live about the lifting of the quarantine and was able to report on what the experience of flying out of Heathrow was like first-hand (I said that I had seen some groups wearing full hazmat suits and face shields). I managed to find a quiet corner to do this without wearing my mask.

After, I went to Pret to get some lunch. All staff were behind perspex screens at the counter and wearing masks. There were also circles on the floor to indicate where people should stand to waiting in line to enable social distancing. People can take their masks off to eat and drink. 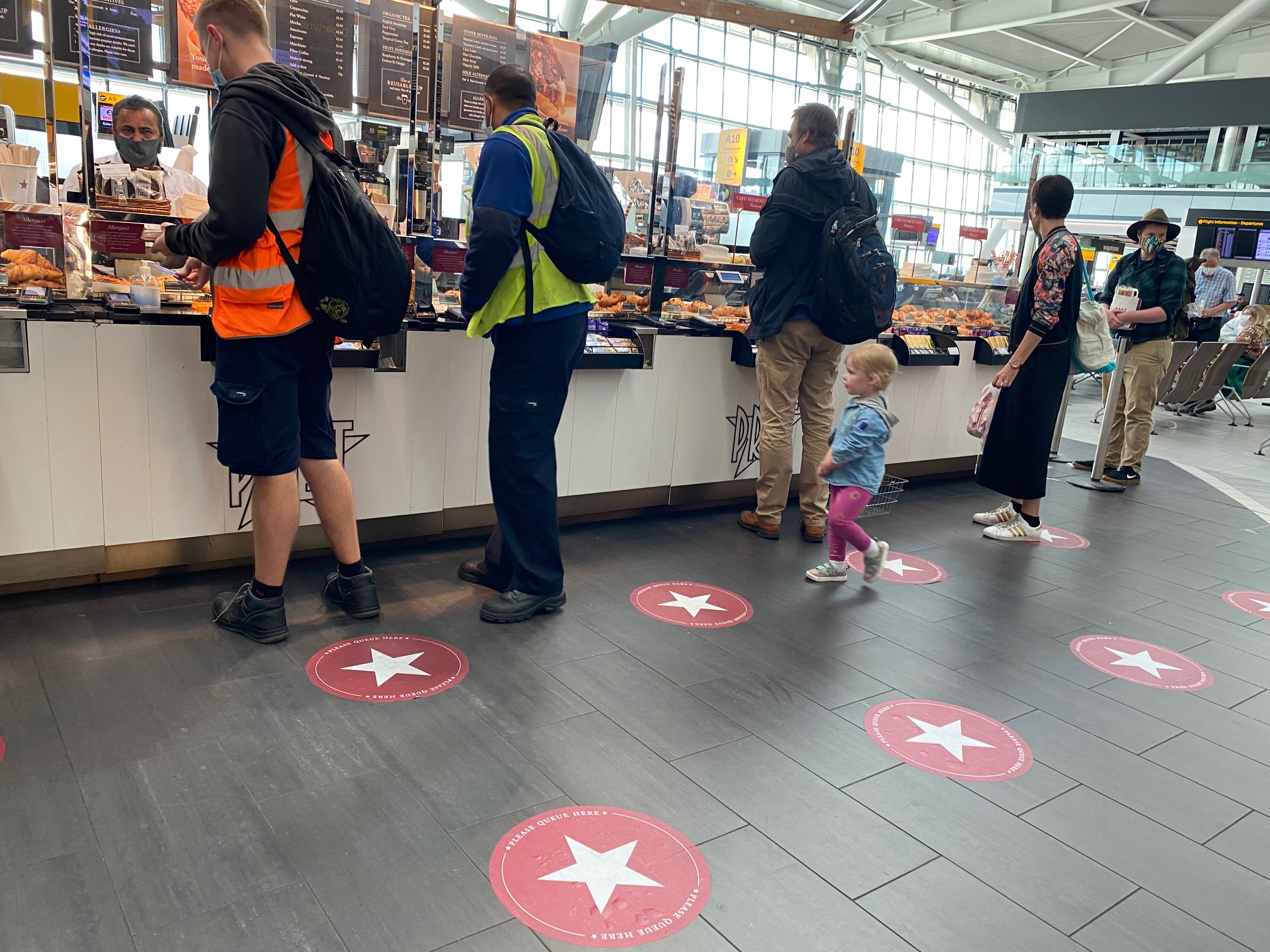 A lot of shops and restaurants were open but some were closed. All lounges were also closed except for Aspire.

At the gate, everyone sat down as normal on benches crowded together, although passengers were called by row so to be more organised with the boarding process.

Families with young children and business class passengers were given priority, with boarding via an air bridge from the front of the plane. We had chosen to book seats at the back of the plane as when we checked in online, it looked like the back third of the plane was empty and we wanted to be as far away from other people as possible.

However, by the time we took our seat, there were lots of other people filling the plane (in the end it was about three quarters full) and the downside of being in the last row is that there is no window. That said, I liked the fact that there was no one else behind us.

The seats looked clean (the airline has announced a raft of “enhanced cleaning” measures but we wiped down all the surfaces around us to be on the safe side, especially with a toddler.

The crew were wearing masks and plastic gloves, and handed out plastic bags containing wet wipes and sachets of gel.

During the flight, they then handed out bags containing water and crisps (the M&S buy-on-board service is gone for now). I thought it was very wasteful to be using all those plastic bags. There were no in-flight magazines. (Who knows if High Life will return? For now, Cedar has stopped publishing print copies. Globetrender has written about the future of travel publishing here.) 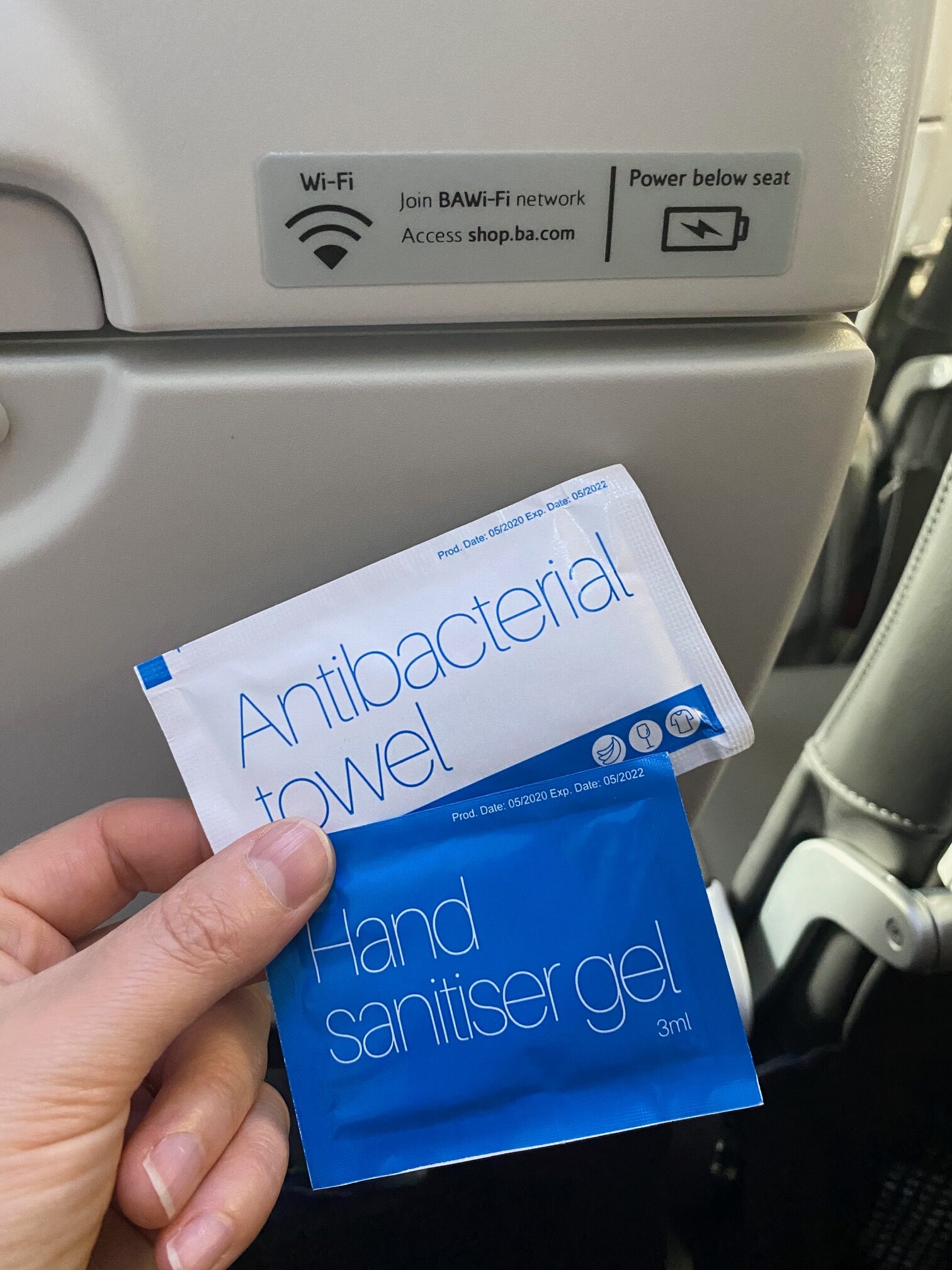 Disembarkation was excellent – so much better than normal as there was no rush to get luggage from the over-head bins. Instead, crew asked passengers to remain seated and leave the plane from the front, row by row. We were the last off but it didn’t matter.

At check-in, we were also given health declarations to sign saying that we had no Covid-19 symptoms and we completed these during the flight. However, when we landed, the immigration officer at Toulouse wasn’t interested in taking it. (It did seem a bit late to be asking for that once people had arrived in the country.)

Passports were checked as normal (face masks removed) and luggage collected from the carousel. There was no Covid-testing for arrivals in place, no quarantine requirement and we didn’t have to give an address of where we were staying.

From July 4, France became exempt from FCO advice against all non-essential international travel. The FCO says: “France began progressive deconfinement from May 11. Each départment was categorised ‘red’, ‘orange’ or ‘green’, dictating the extent to which measures could be relaxed. Currently all départments in mainland France are categorised as ‘green’.

“Wearing masks on public transport is compulsory for all users aged 11 and over, with fines for those who are not compliant. Masks are also compulsory in taxis and private hire vehicles without a plexiglass screen.

“There is no quarantine requirement for arrivals from the UK, from the wider European Area (as defined above) and from Australia, Canada, Georgia, Japan, Montenegro, Morocco, New Zealand, Rwanda, Serbia, South Korea, Thailand, Tunisia and Uruguay. Arrivals from other countries are asked to self-isolate for 14 days on arrival in mainland France.”

Overall, I found the flight to be less stressful than normal as it was so quiet at the airport. I was impressed with the number of hand sanitising stations I came across in Heathrow but was surprised our check-in agent wasn’t wearing a mask.

Because I have almost certainly had Covid-19 (I am waiting for my Thriva antibody test results to come back – although I know this doesn’t guarantee protection), I feel fairly confident about flying again, albeit only through hubs and on airlines that promise spotless cleaning.

Wearing a mask for the whole journey was a bit uncomfortable – I wouldn’t like to have to do it on a long-haul flight, especially if I had to wear a face shield as well (as you do in economy class on Qatar Airways, for example.) I thought the health declaration was pointless, as did immigration at Toulouse.