The ten best countries in the world for female expats

A recent survey conducted by global expat network InterNations has revealed the ten best – and ten worst – countries to relocate to as a woman. Hannah Hastings reports

At some point, most people have fantasised about moving somewhere that offers better career prospects and a more exciting lifestyle. With more than 6,000 responses, the results of the InternNations “Expat Insider 2016” survey reveals why moving abroad has become a growing trend among women, and where the best countries are for female expats.

Members rated on a scale of one to seven 43 different aspects about living abroad, ranging from factual to personal opinions. Factors included quality of life, ease of settling in, working abroad, family life, personal finance and cost of living. However, each country needed a minimum of 50 participants to qualify for the final ranking.

The top three reasons women choose to live and work abroad include seeking an adventure (26 per cent), because partner either lives or has a job overseas (33 per cent) or their job or business is located in another country (46 per cent). Almost 80 per cent of female expats said they were happier with their life abroad and 31 per cent even considered being an expat permanently.

The following results from the annual InternNations Expat Insider survey encompass 67 countries and the ratings given to them by female expats. The final top ten countries have been ranked below…

Denmark is often near (or at) the top of global rankings (last year it was voted the happiest country in the world), so it is no surprise that it has found a place on this list. Female expats put Denmark’s work-life balance in fourth place. Having the shortest full-time work week of all the countries listed (39 hours), it leaves plenty of time to explore the colourful harbours and varied seafood-based cuisine. Job security sits at a comfortable 15th position, and women working in technology and agriculture industries will have promising careers.

This year, Norway topped the World Happiness Report, which might explain why 66 per cent of expat women said they feel happy with their life here. Elements such as equal pay and gender rights will have certainly contributed to why this Scandinavian country has earned a place on the list. Despite being the fourth-most expensive country in the world to live in, Norway performed significantly well within the personal finance sector; 74 per cent of respondents said they were earning more compared to their native country.

New Zealand’s stunning landscape combined with its laid-back lifestyle is hard to resist. Expat women clearly agree, with 61 per cent stating they would consider permanently living in the country and that adapting to Kiwi lifestyle (83 per cent) was easy. Those who work in New Zealand said the quality of life is considered one of the best – 77 per cent were pleased with their aspect of life.

The only country to feature from South America, Ecuador does well to represent this beautiful continent. Ranking first in work-life balance (84 per cent) Ecuador offers plenty of exciting excursions, such as trips to the Amazon rainforest and colonial towns. The country’s Latino charm doesn’t seem to have phased expat women from sacrificing their personal finance, with 29 per cent admitting they earn significantly less than their home country.

With a population that has just hit 24 million, Australia has long been a popular destination for those seeking a fresh start. Female expats currently living Down Under ranked their work-life balance and the continuous warm climate as the most positive draws. Australia has six major cities located along its coasts, all providing an abundant choice of leisure activities, with an overwhelming 93 per cent of respondents highlighting these as a key reason for relocating there.

Women who have a career in either the travel or financial industry may want to check out Bahrain. Placed at third place in the job and career subcategory, 73 per cent said they were satisfied with their jobs. Bahrain has the fastest-growing economy in the Arab world and is rumoured by archaeologists to have been the location of the biblical Garden of Eden. Expat women also ranked Bahrain sixth for ease for settling in, with 27 per cent saying they felt they could make new friends within the local community.

Hungary was rated the seventh-best country in the world to move to and second in job and career and work-life sectors. Even though almost half of respondents admitted to earning less than their home country (43 per cent) Hungary’s excellent transport connections and lively city centres have made it a desirable place for many women to settle.

Germany comes in at third place for expat women. With the largest population in the EU, employment rates in  are encouraging – 46 per cent of women having employee or managerial roles, with 65 per cent feeling satisfied with their careers overall. Bordering nine other countries, Germany is a popular and easy place to commute to and from. 89 per cent of expats feeling positive about their personal safety (compared to a global average of 77 per cent) and 90 per cent are positive about Germany’s economy.

Women who desire working in high-tech cities with stunning landscapes may want to consider a career in Taiwan. 86 per cent of respondents said they were happy with their position at work, and three out of five women said they were positive about their career prospects. Taiwan has become the first country in the world to offer free access to wifi to everybody, comes first in the job and career sector.

One of the smallest countries in the world, Luxembourg nevertheless has a lot to offer. The country provides the highest minimum wage in Europe thanks to a booming economy, making Luxembourg the best for job security. Also ranked number one was its safety and security, with 96 per cent of expat women feeling positive about the country’s political stability and peaceful environment. For those who enjoy the finer things in life, Luxembourg also offers an excellent range of wine from its vineyards overlooking the Moselle River. 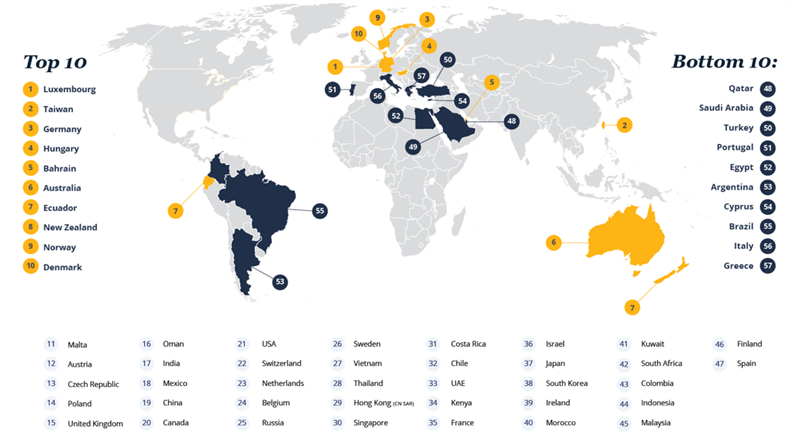