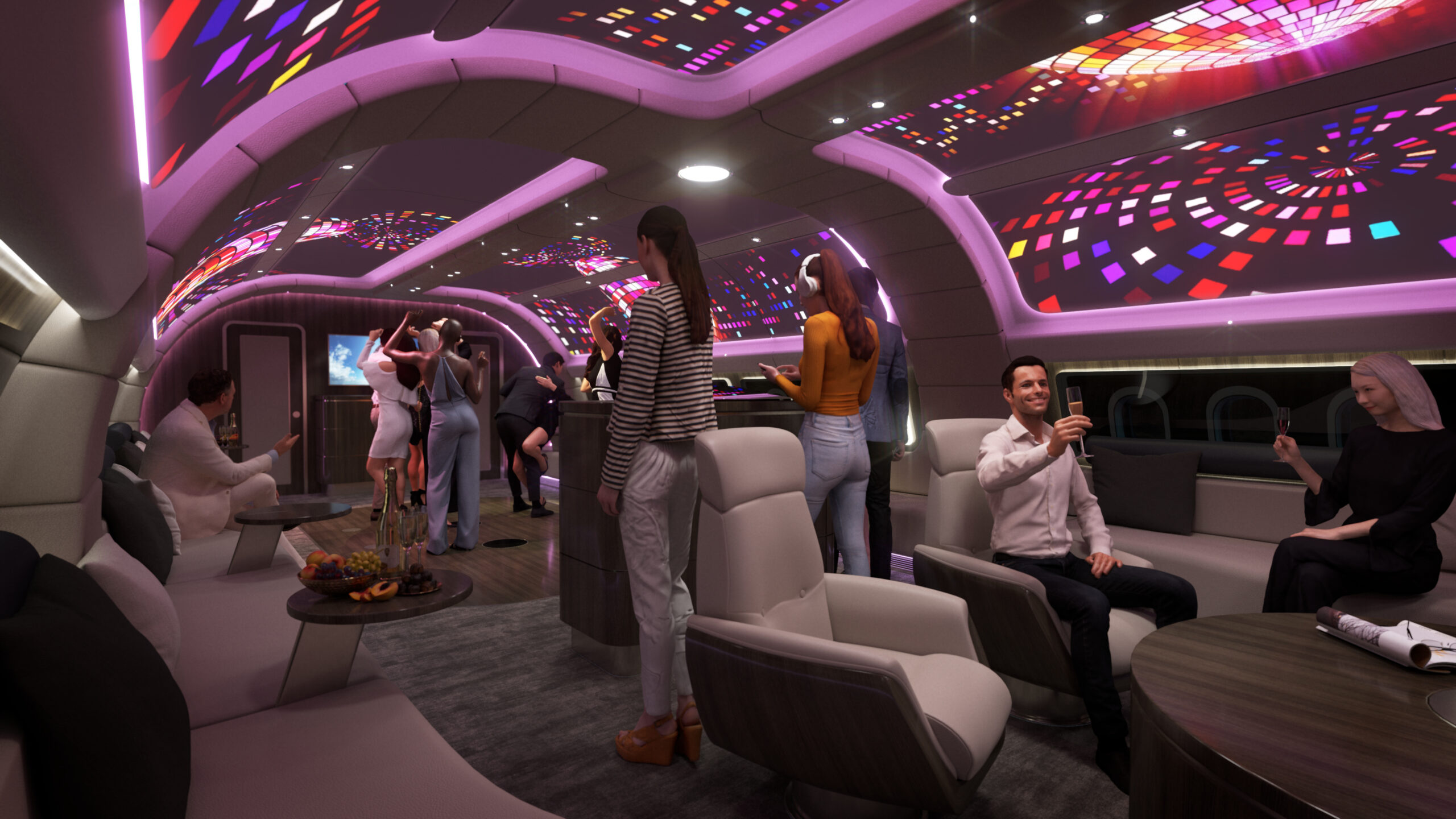 Unveiled at this year’s Dubai Airshow, German company Lufthansa Technik has revealed details of its new wide-body VIP “Explorer” plane, which has been inspired by the way super yachts fulfill two wishes for their owners – to take them almost anywhere at any time and to serve as a dedicated base camp with a wide variety of leisure activities onboard. 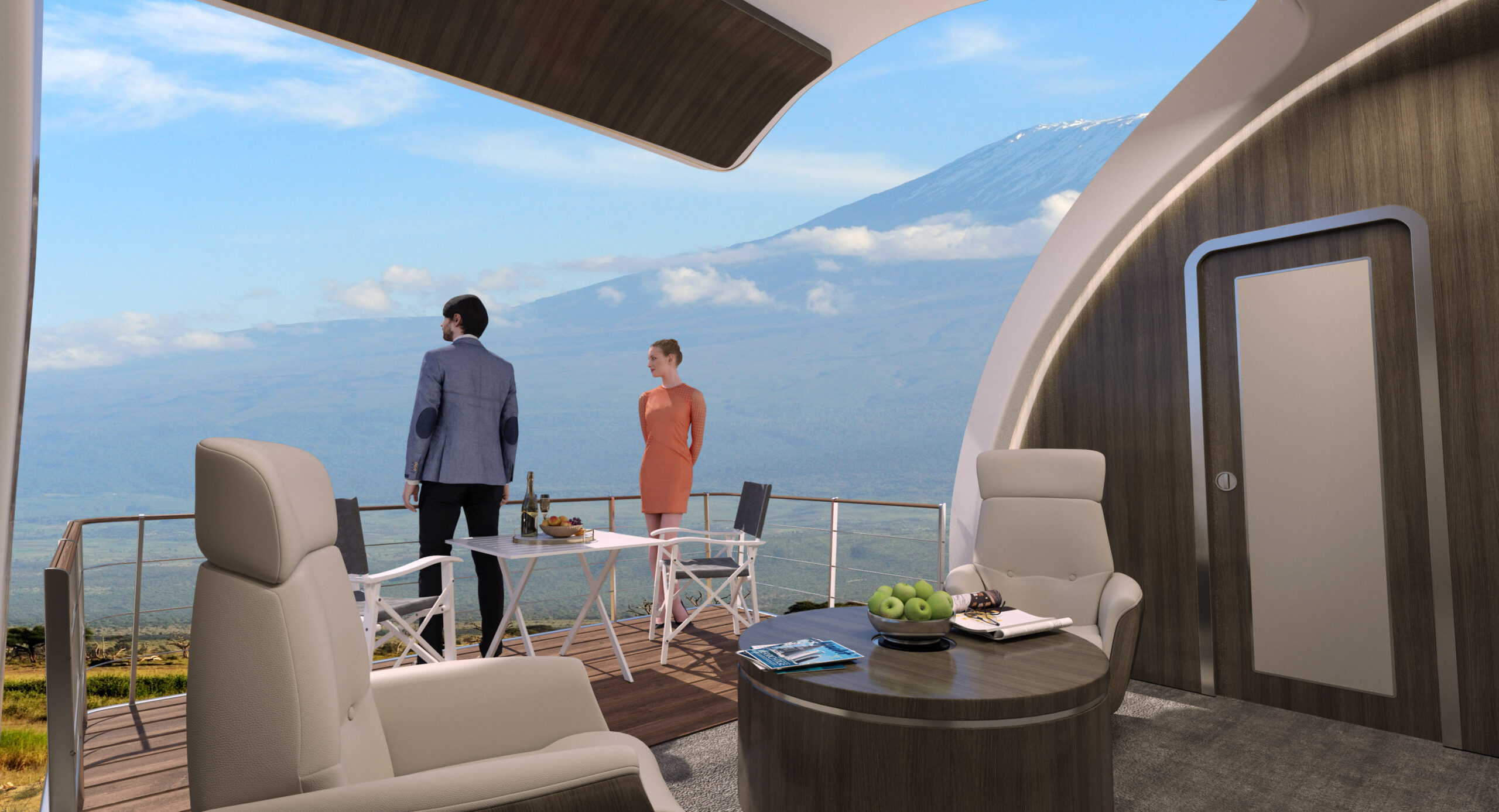 Designed for just 12 passengers, the A330 has been as a canvas for Explorer because, as a classic wide-body aircraft, it offers “sufficient space for a large number of novel cabin ideas” and also the range to fly long distances. (Normally it can seat about 250 people.) 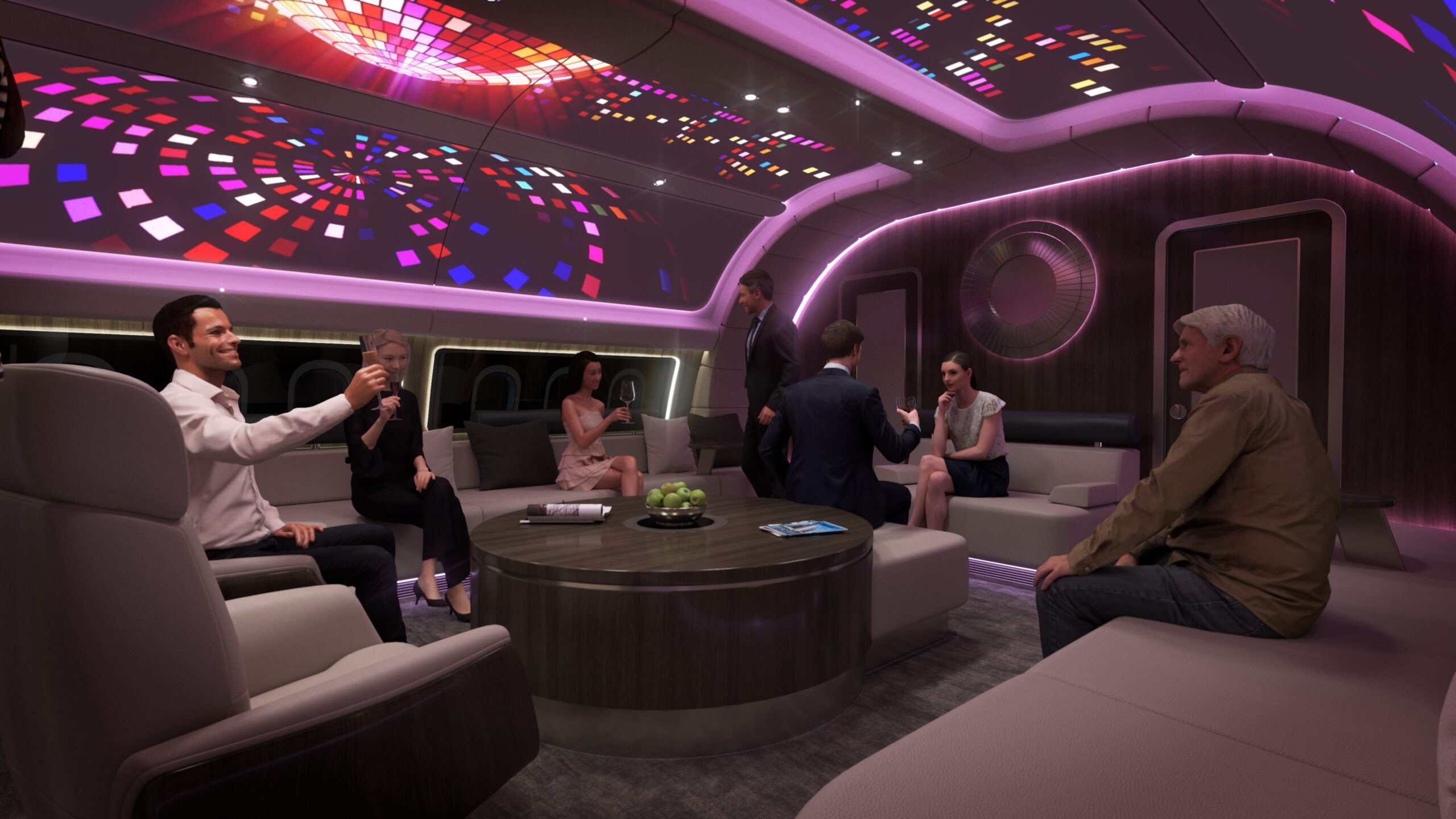 The idea is that anyone who can afford to buy and customise one of these aircraft, which would costs hundreds of millions of pounds, could receive something mind-blowingly cool, lavish and futuristic. 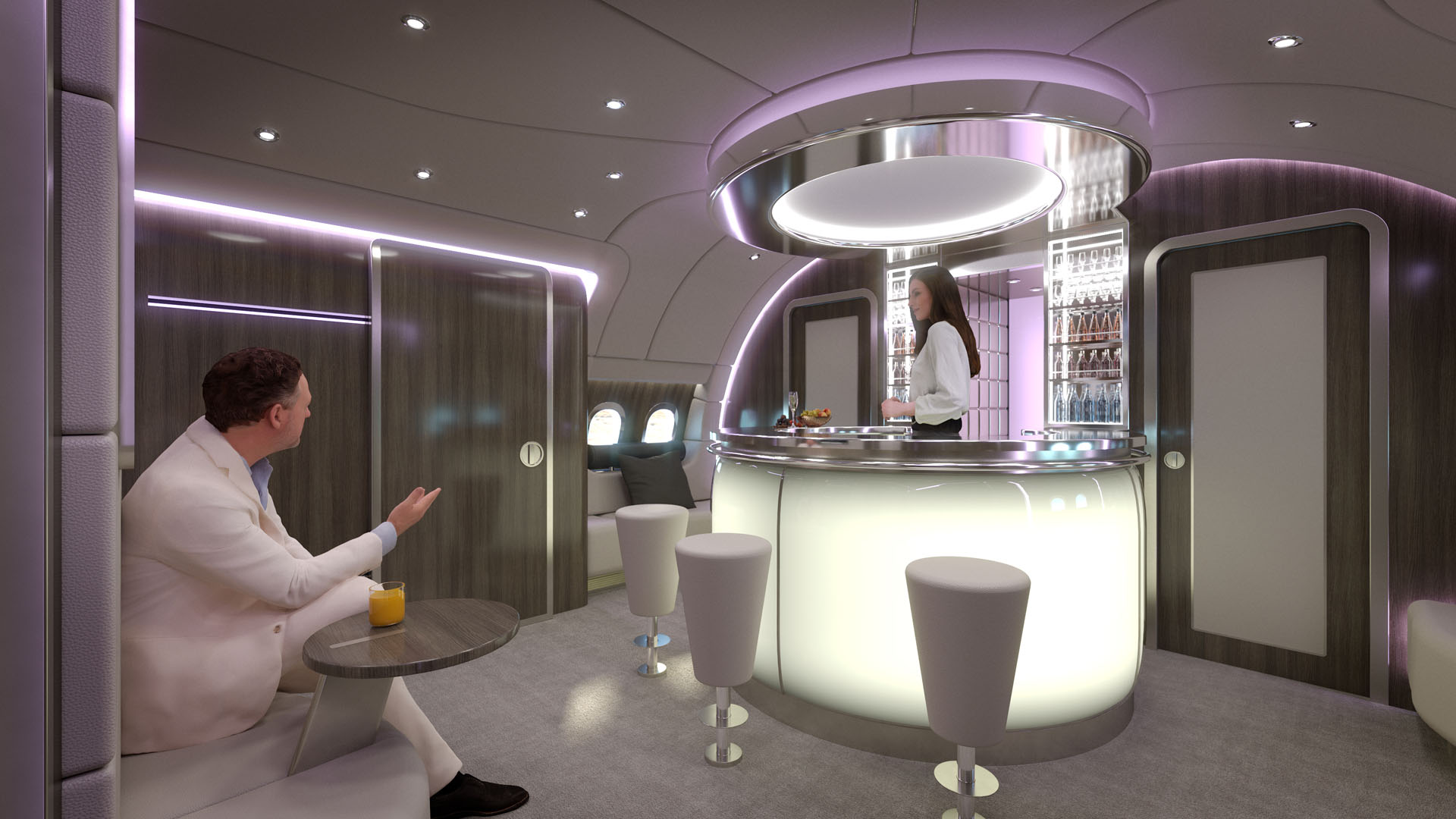 Wieland Timm, head of sales VIP and special mission aircraft services at Lufthansa Technik, says: “In yacht building, multifunctional exploration vessels have now become a class in their own right. And many owners of such vessels also call an aircraft their own. 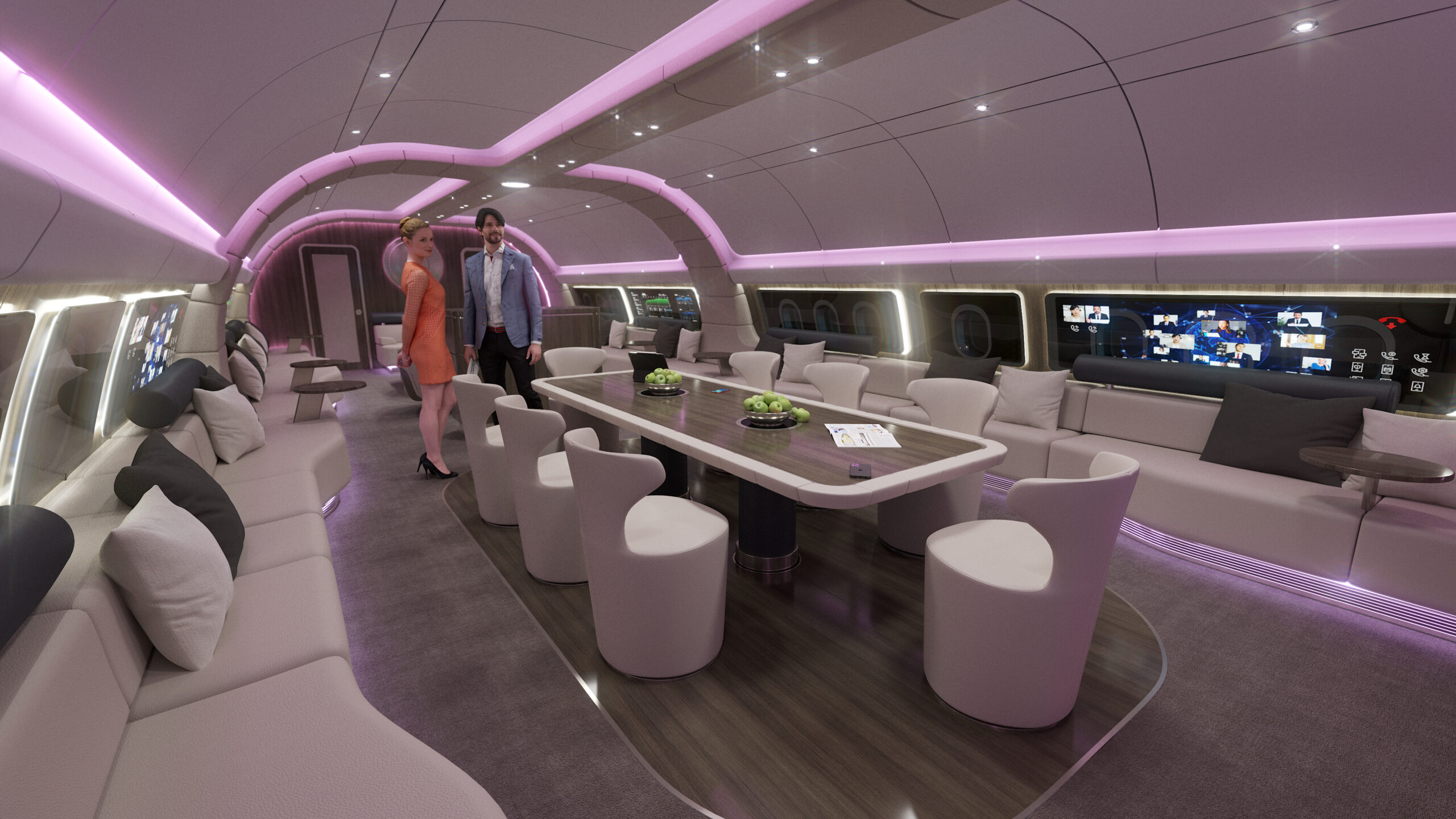 “For this fast-growing target group of VIP world explorers, we have therefore now created a flying platform for the first time. Unlike a yacht, however, our Explorer aircraft allows passengers to travel to the other side of the globe within hours and set up their own individual base camp for further activities. This opens up completely new possibilities for explorers.” 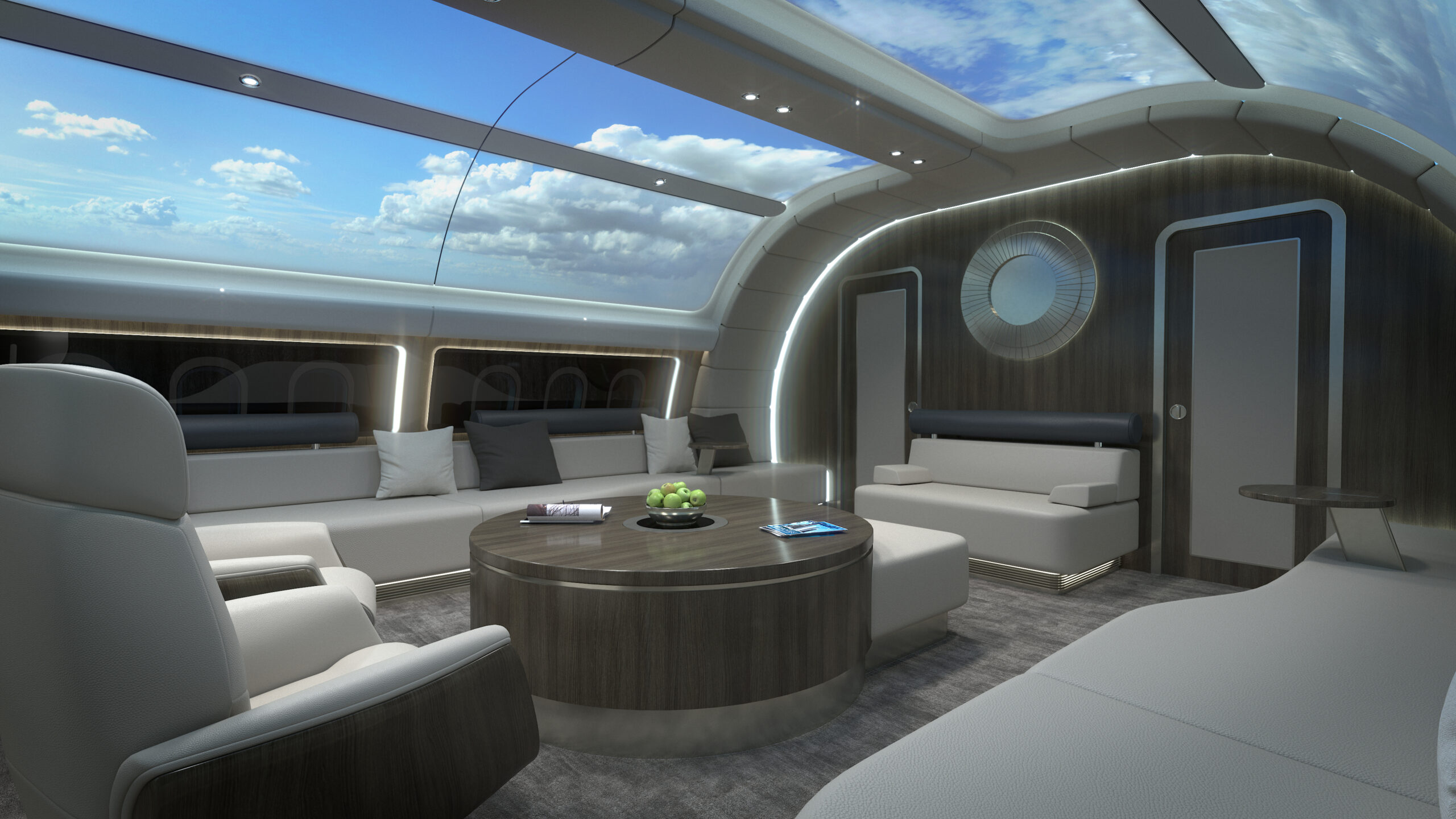 Through a partnership with Diehl Aerospace, one of the most dazzling features of Explorer will be its innovative, large-scale integrated projection system for virtual content that extends from the window belt to almost the entire cabin ceiling in the multifunctional lounge area. 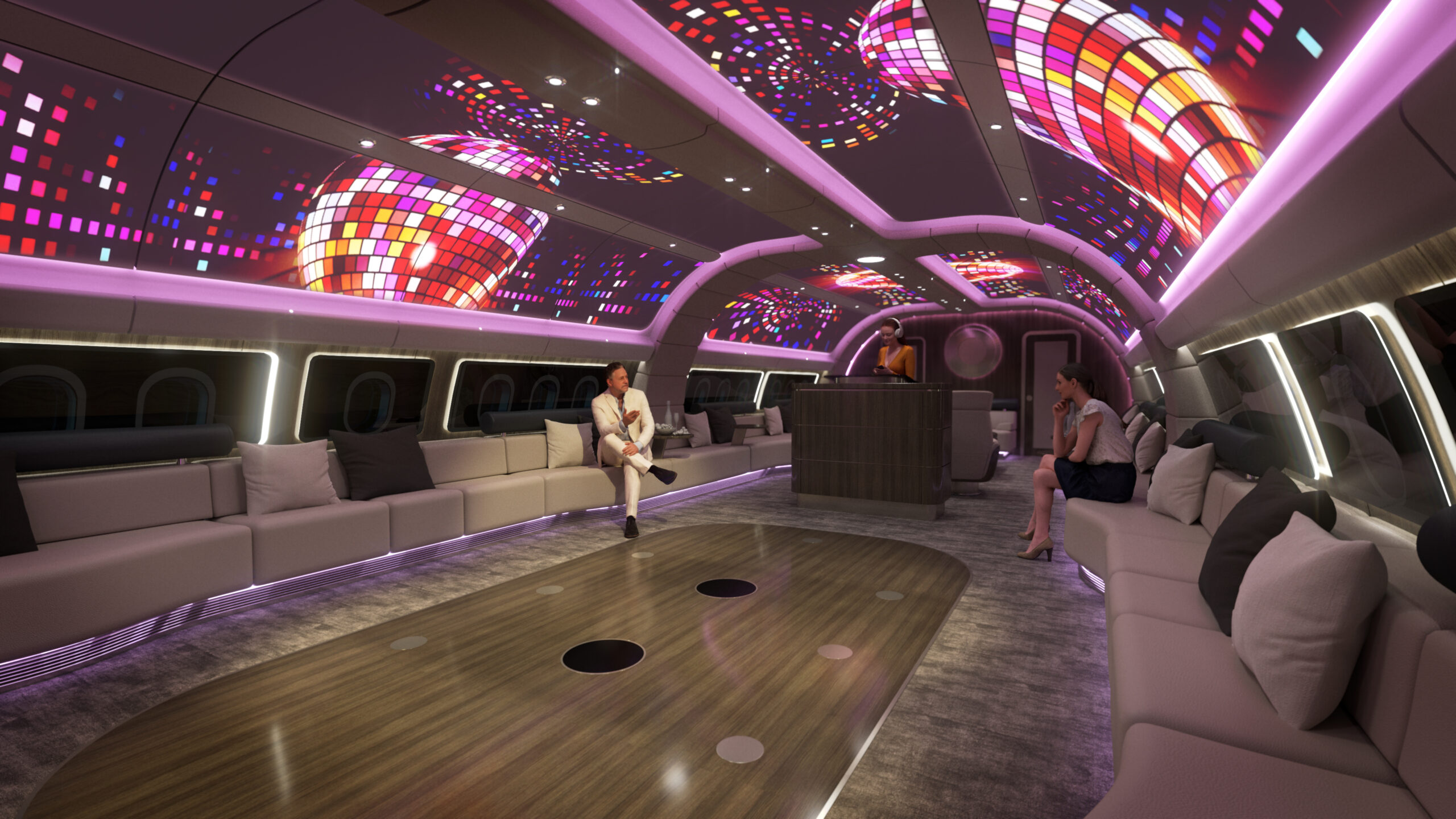 Lufthansa Technik says that although similar features have often been seen in design studies, there has been no suitable technology to implement them in a way that is both aesthetically convincing and certifiable, until now. 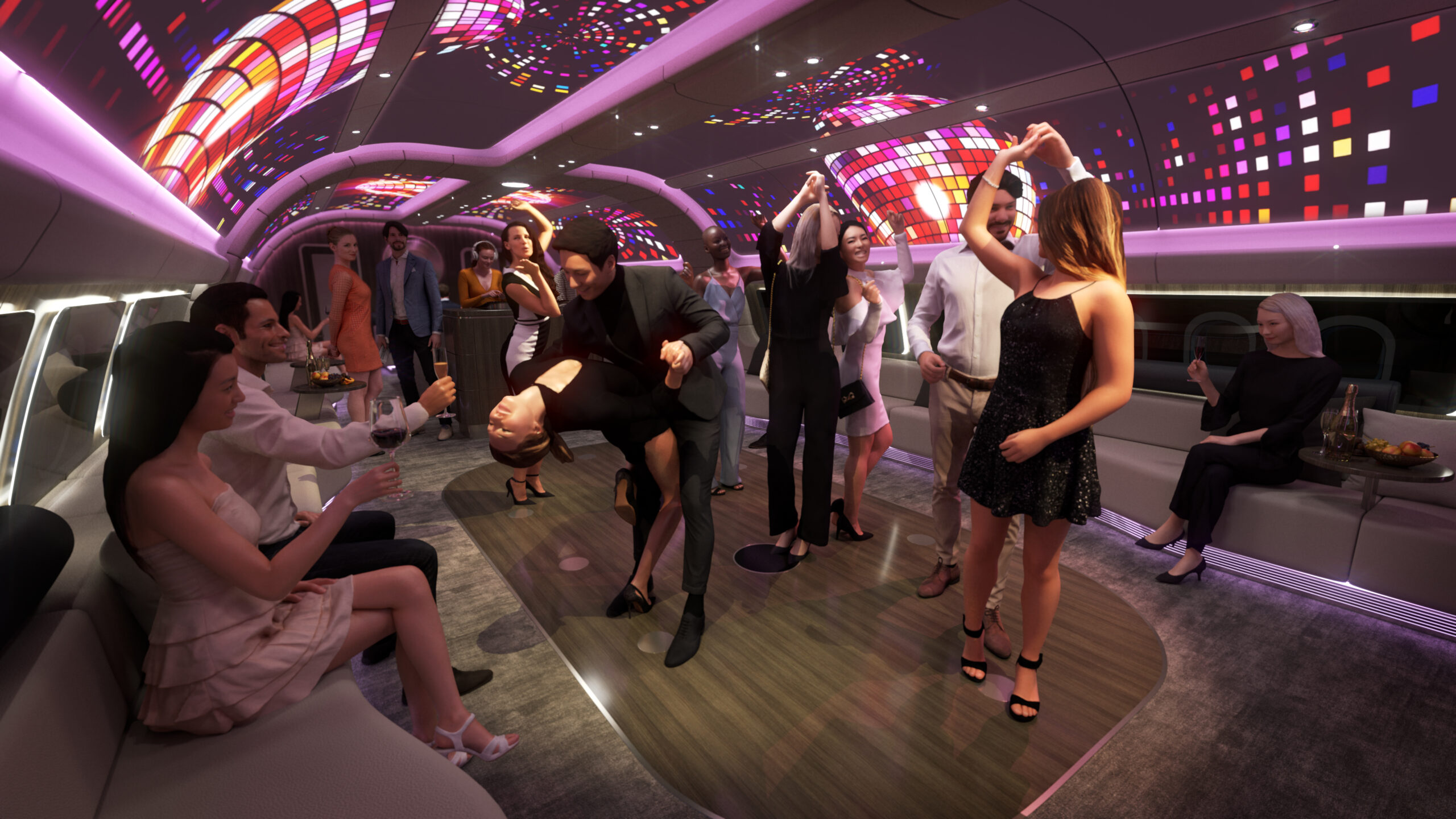 By positioning small, lightweight and “passively cooled” projectors into the sidewall and ceiling elements, large-scale virtual reality illuminations are created, the content of which customers can configure individually.

Michael Bork, aircraft interior architect in VIP and special mission aircraft services at Lufthansa Technik, says it will be optimised to “bring virtual worlds to life, changing the overall look of the cabin by a fingertip“. From virtual day and night skies to animated underwater worlds, architectural forms and even a flying discotheque, anything is possible. 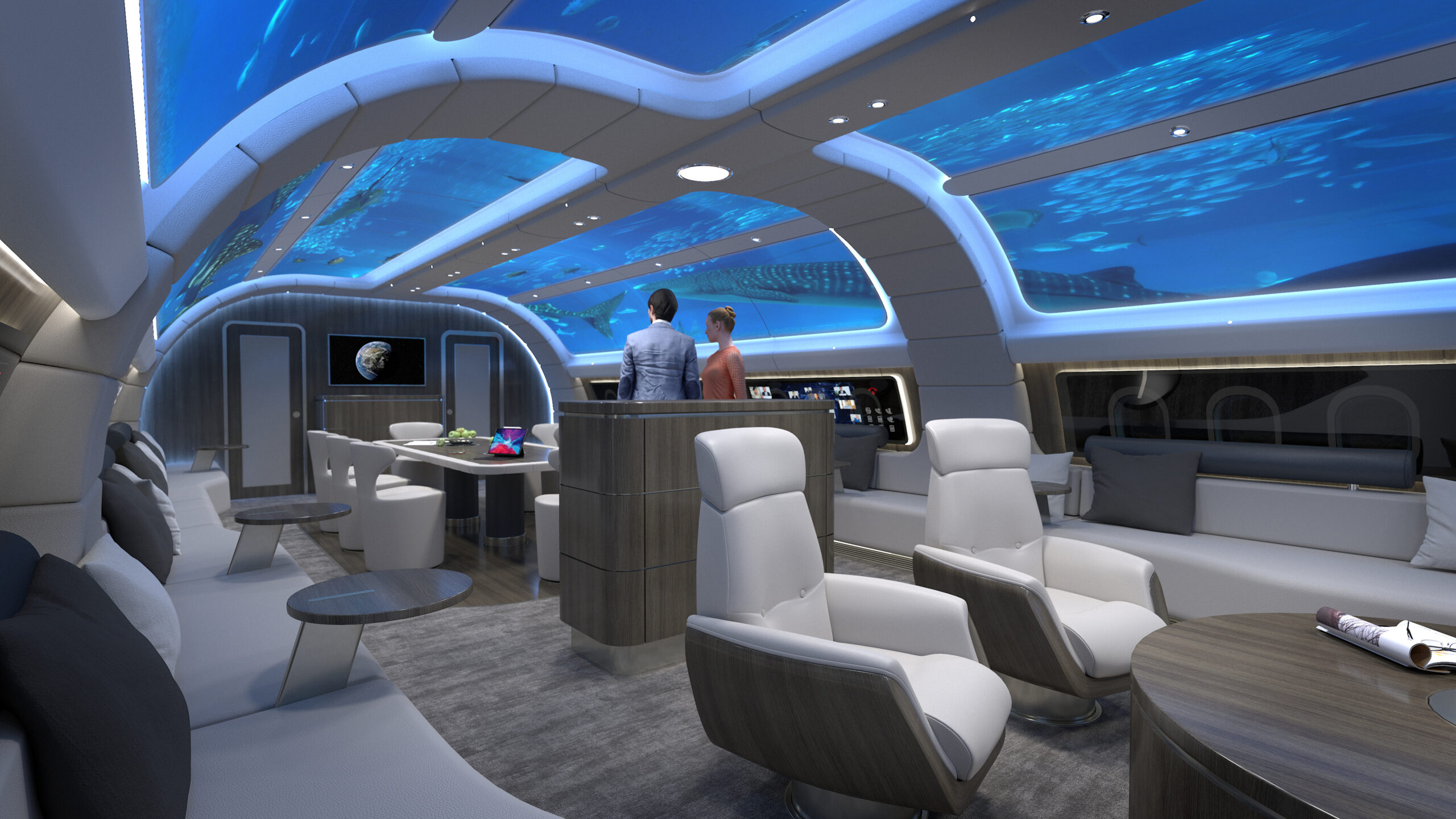 Another exciting innovation is Explorer’s retractable veranda in the forward fuselage, which extends outward from the parked aircraft to form a spacious viewing platform about four metres off the ground. 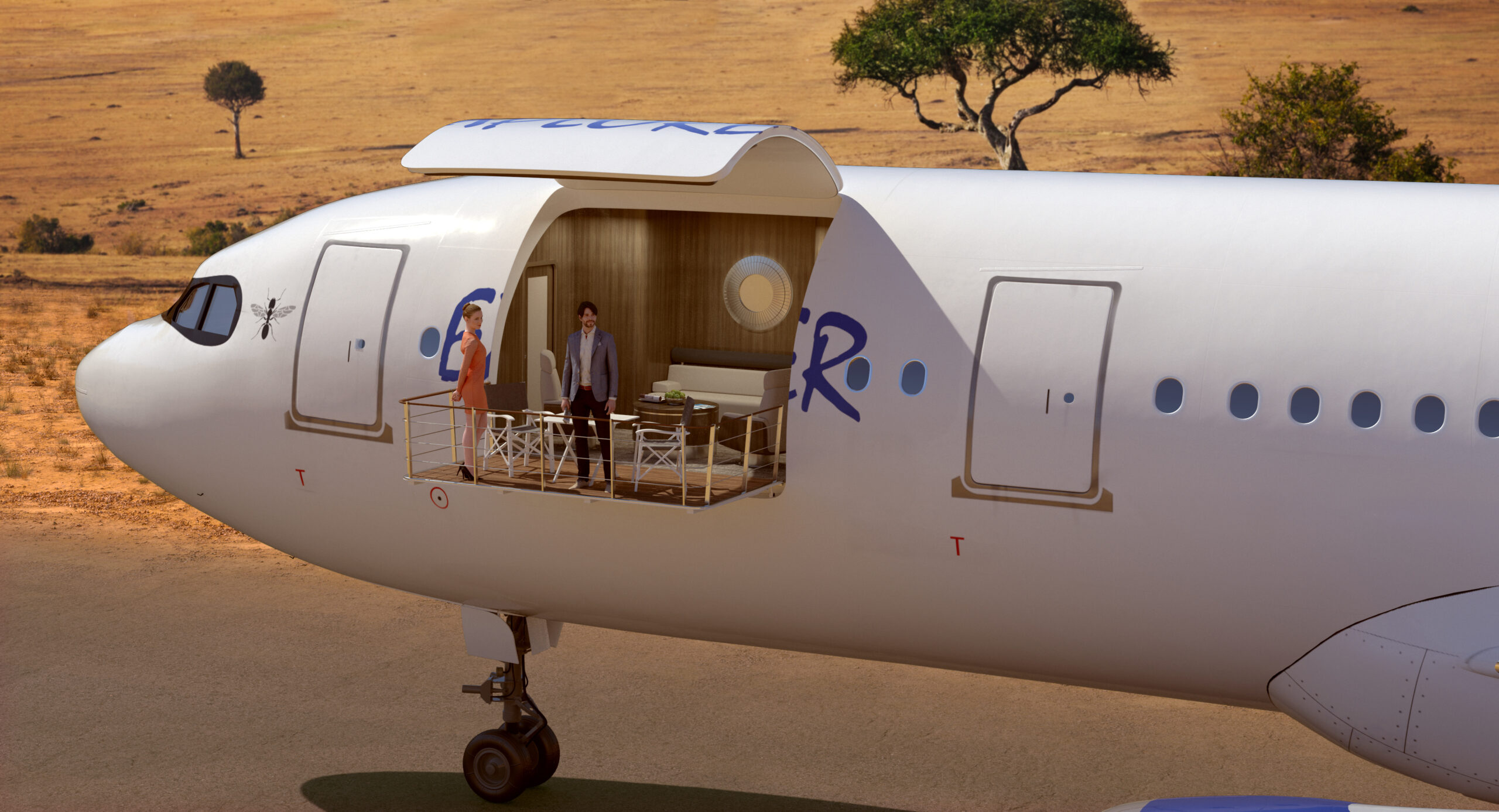 In addition to bedrooms and guest rooms, bathrooms, offices, dining, party and conference areas, there is a multifunctional room in the rear of the aircraft that could be used as a gym or hospital. There would also be space to store off-road vehicles, bikes, jet skis and scooters.

Explorer can also be customised to accommodate a larger group of 47 passengers, complete with an individual owner’s module encompassing a master bedroom, bathroom and office.