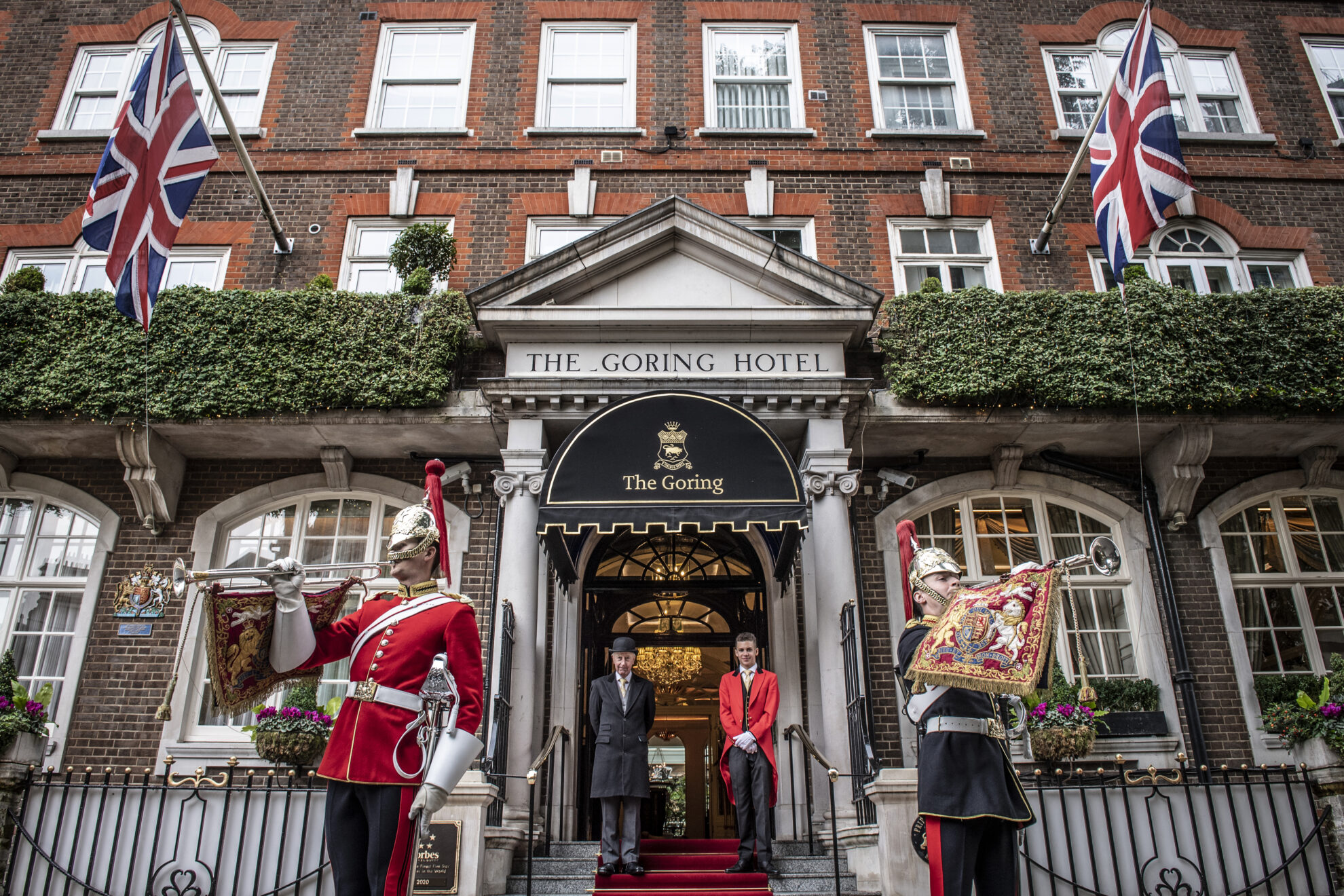 The Goring hotel in London’s Belgravia (not far from Victoria station) is decidedly posh. It is, after all, the only hotel in the world to have a Royal Warrant for its services to hospitality. (The Queen used to pop in quite regularly, apparently.)

That’s not to say it’s not welcoming of “commoners” though – I checked in with my wife and young daughter, and they were nothing but warm and amenable (not a given when you’re part of the LGBTQ+ community), taking delight in arranging for there to be a trunk full of dressing up clothes, a chocolate cake, cookies, toy sheep, slippers and a robe left in the room for our child. I ensured the young doorman, dressed in a red coat and tails, received a generous tip. 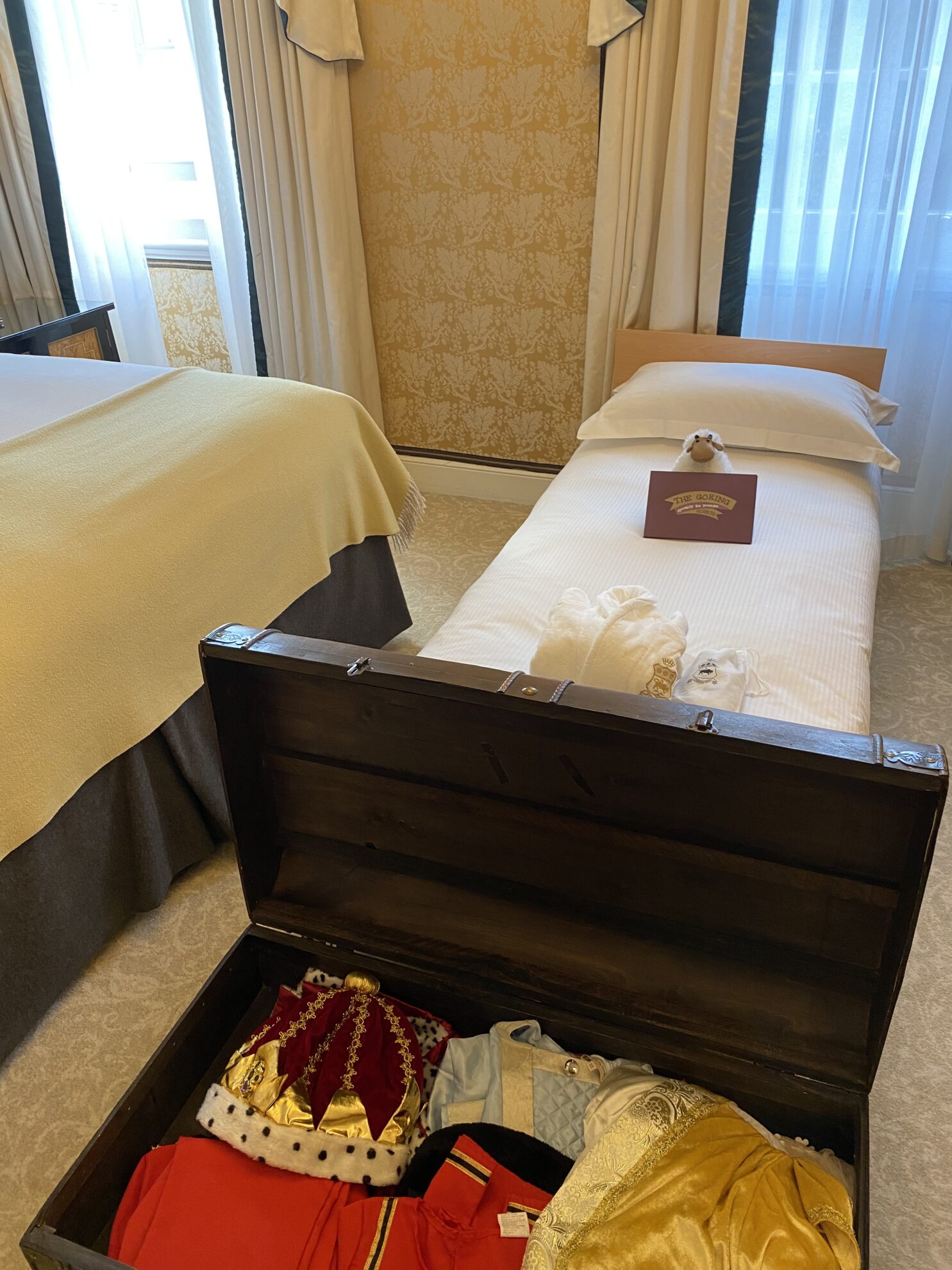 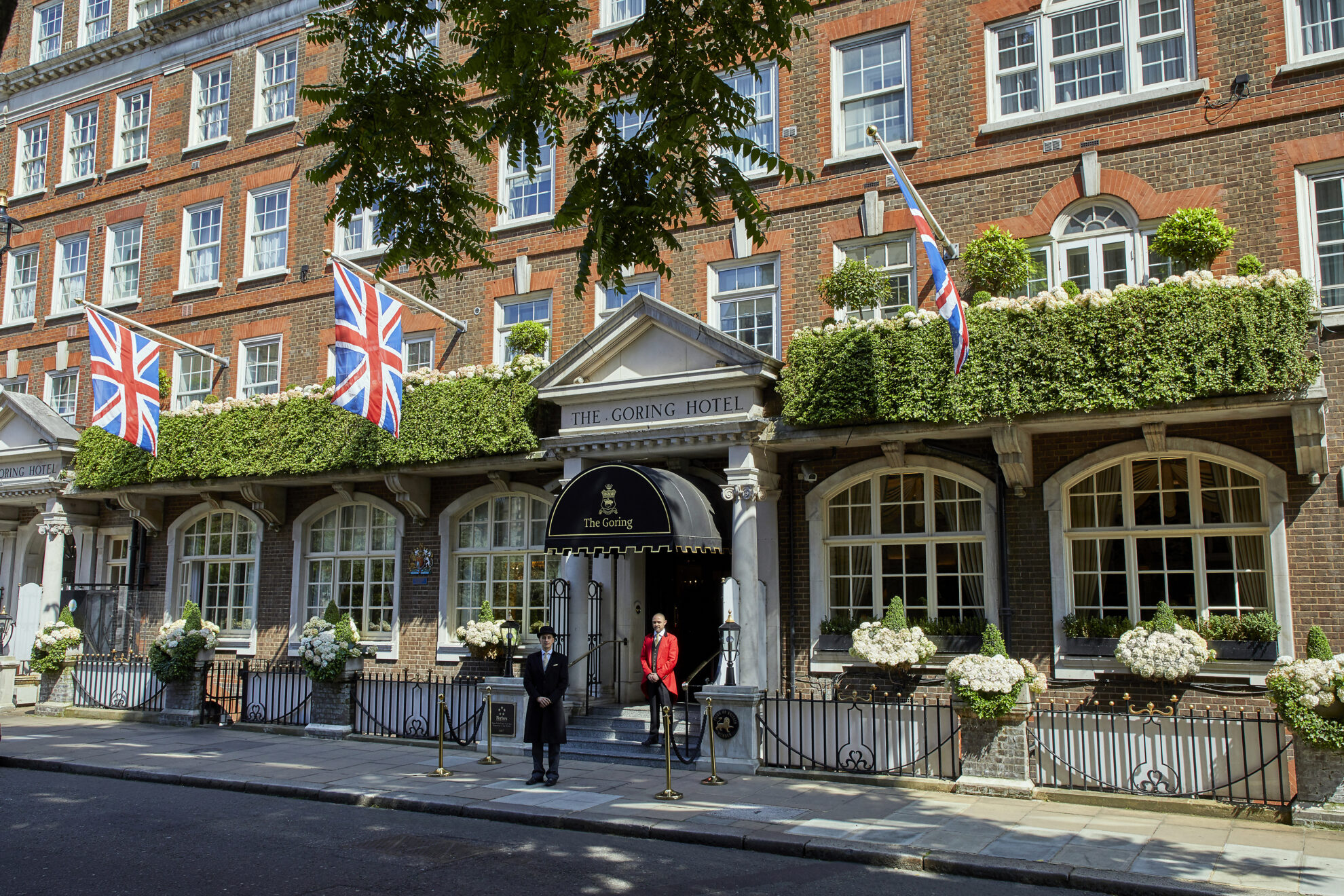 Although the property is over 100 years old (it first opened in 1910), it is regularly (and sensitively) revamped. Most recently it had fresh wallpaper applied to the interiors – a mix of specially commissioned, hand-embroidered silk and hand-painted silver leaf by Fromental and Gainsborough (suppliers to Buckingham Palace).
The effect is majestic (look out for the animals who represent figures from the hotel’s past). At the back is a garden with a summer lawn that’s ideal for croquet. 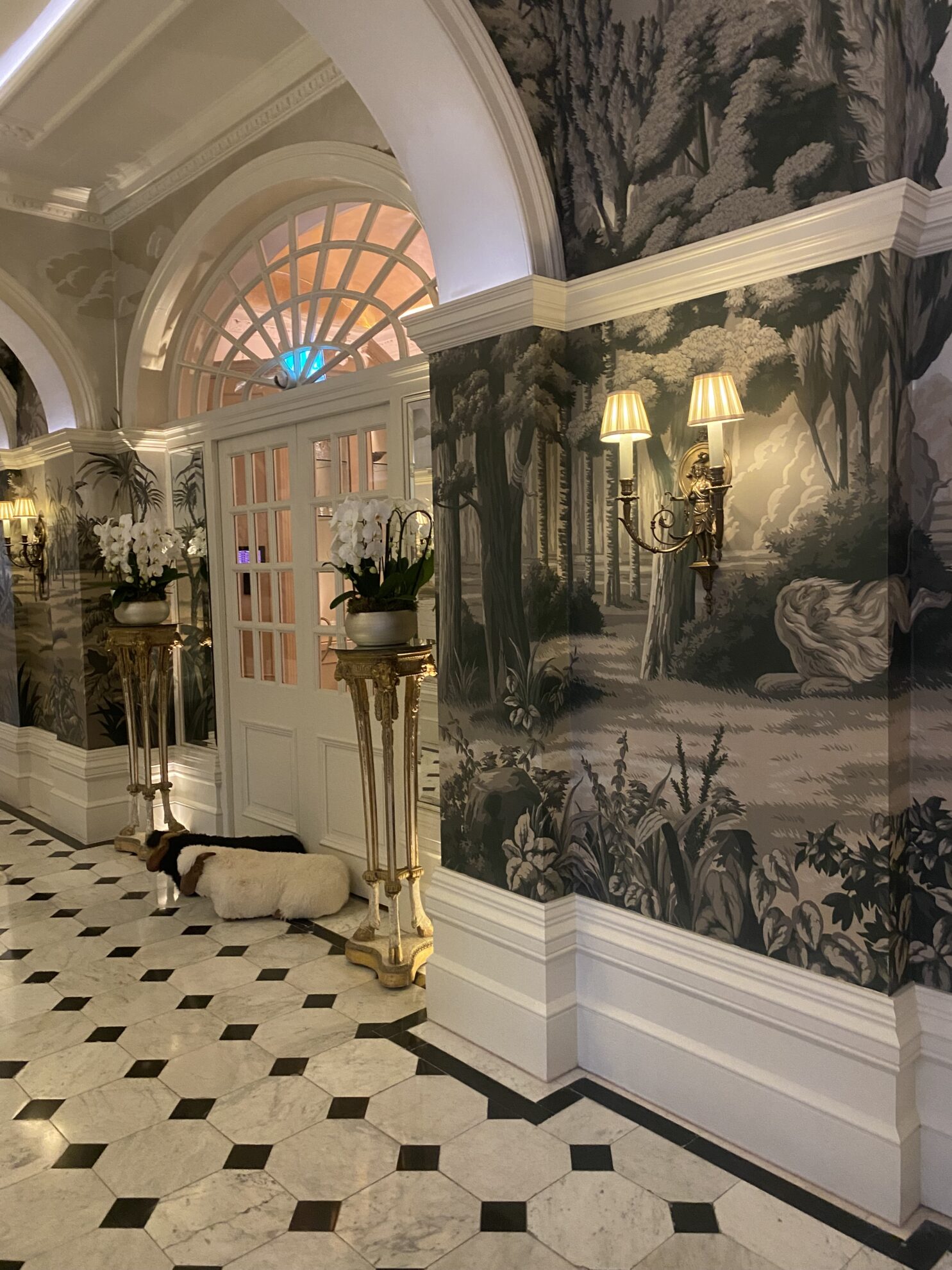 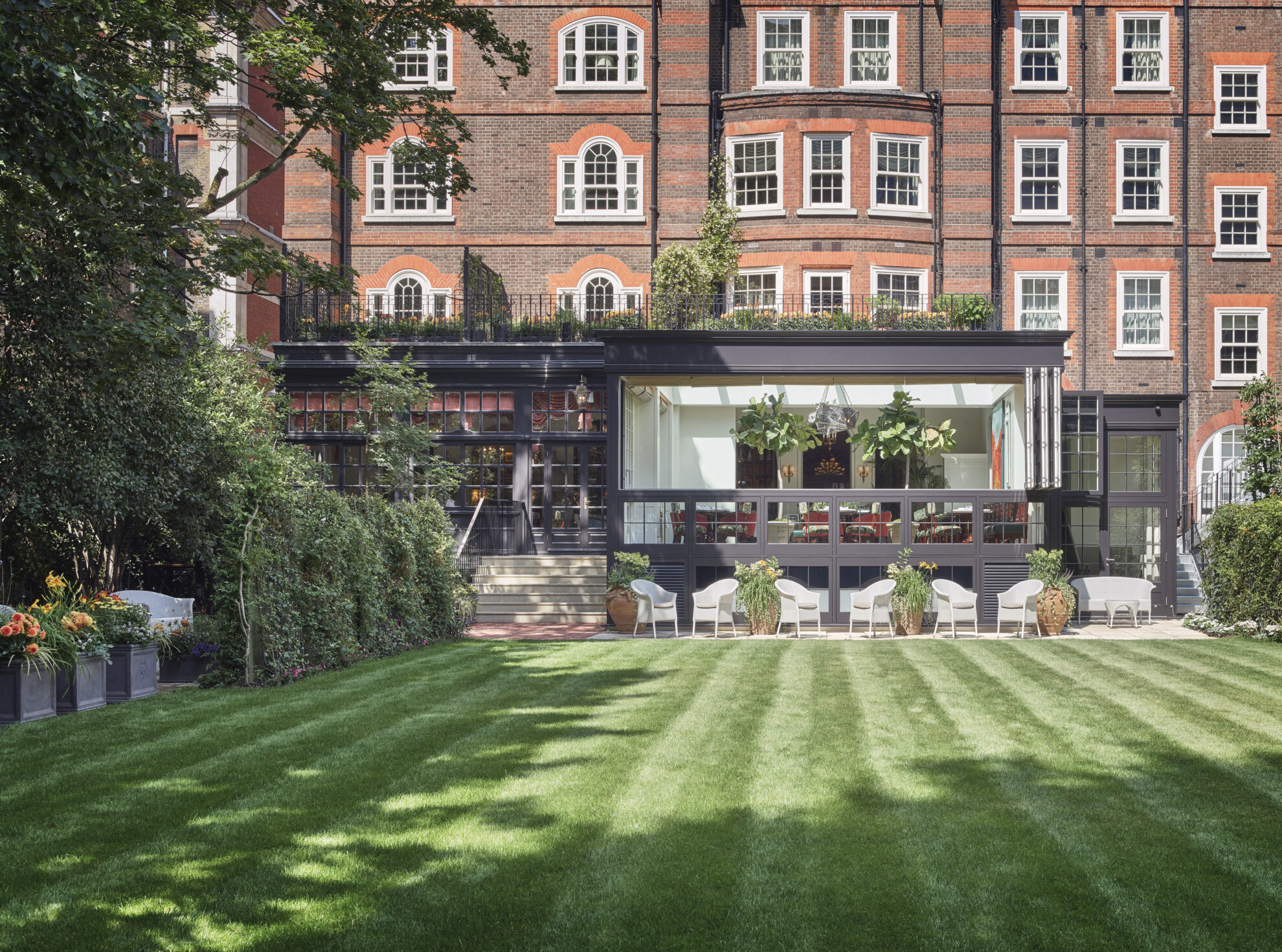 Although service is exemplary for every guest, those staying in suites additionally benefit from dedicated footmen who will unpack and pack your luggage for you, as well as set up the room to your preferences. A stay in the two-bedroom Royal suite (where Kate Middleton spent the night before her wedding to Prince William) costs £8.5k – breakfast not included. 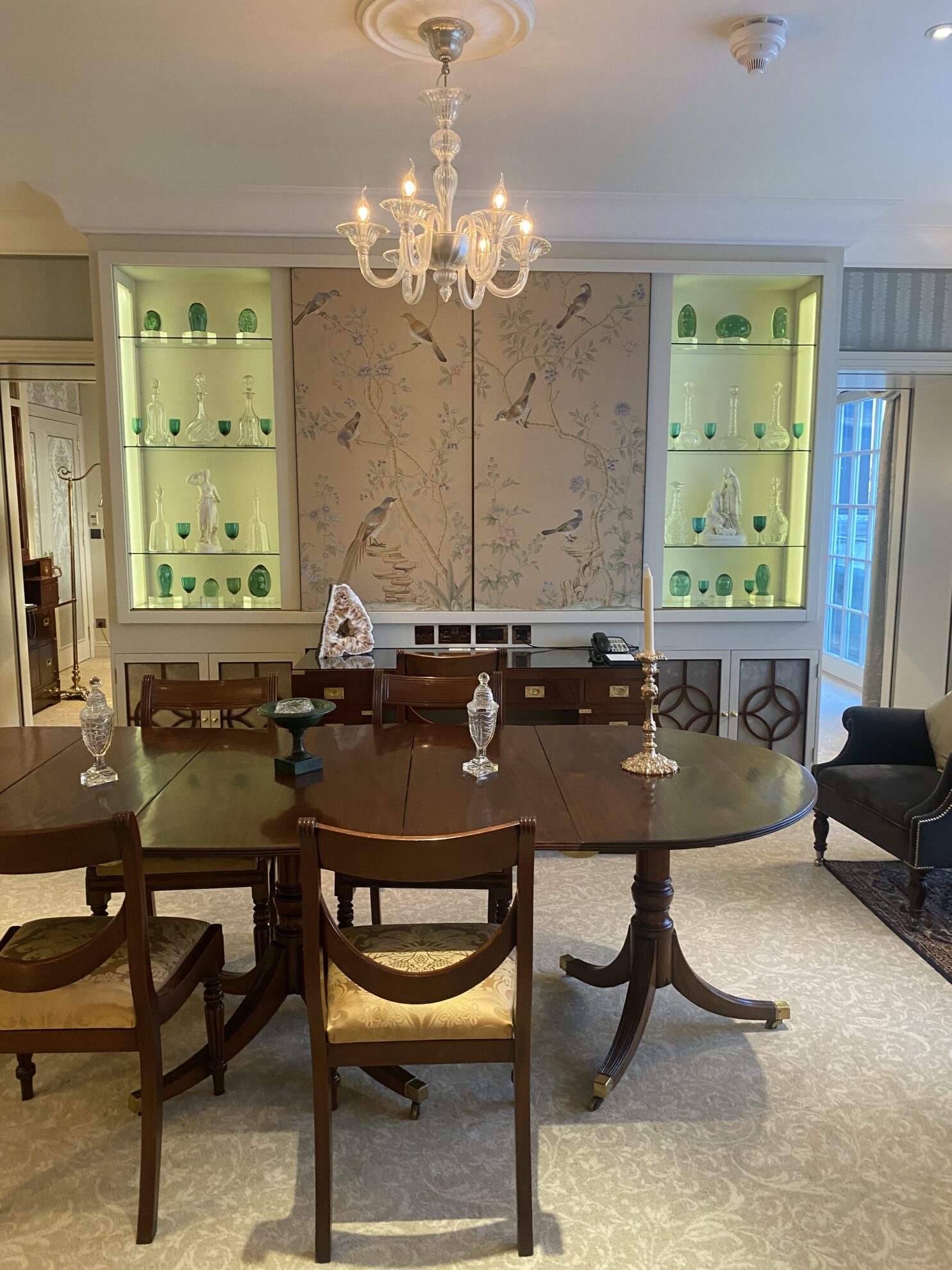 As you’d expect, the Goring has a truly elegant cocktail bar, with a pianist adding to the atmosphere in the evening. I had an excellent Vesper martini, served with top-notch nuts and crisps and bottled water from Blenheim Palace. The menu is also a thing to behold – a fascinating ode to the history of drinking, with the concoctions favoured by famous people from the past available to order. 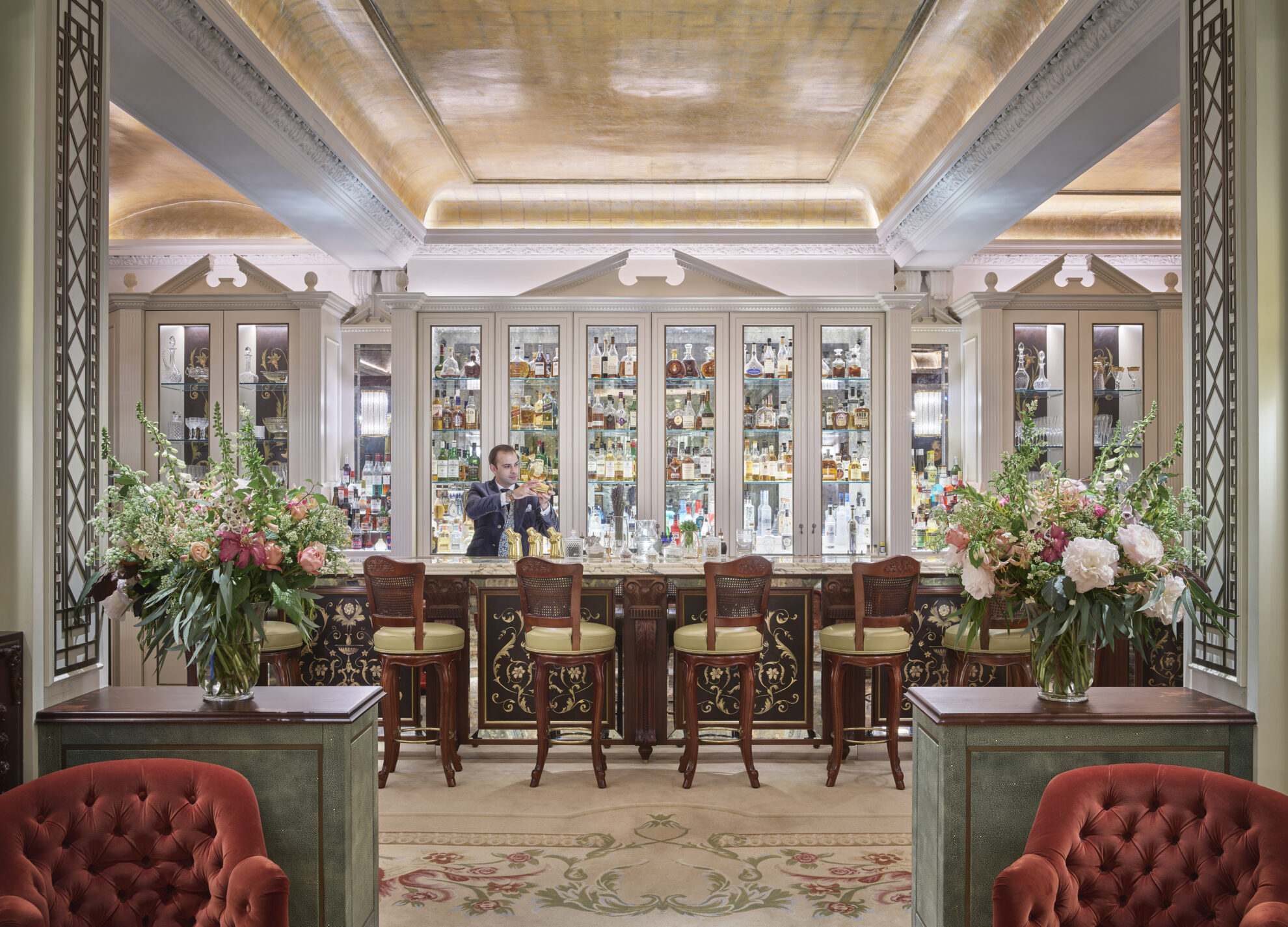 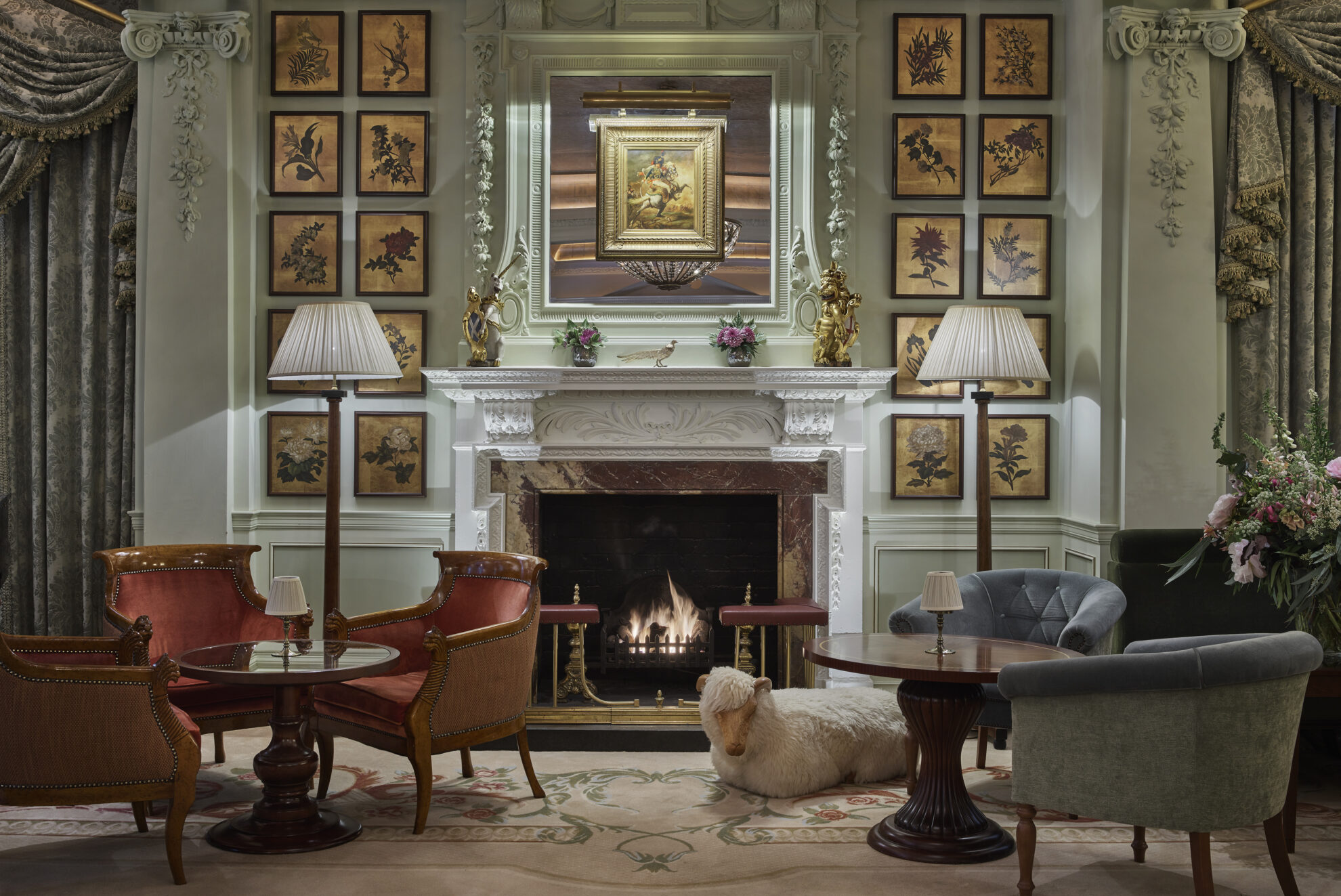 Otto Goring, a German chef and founder of the Goring hotel, was apparently partial to champagne and negronis so the bar created a drink called “the German”, made with Beefeater 24 gin infused with orange, homemade yuzu and rosemary syrup, black pepper and cardamom bitters, and Ayala champagne (£21). Here is a picture of the Jubilee Fizz… 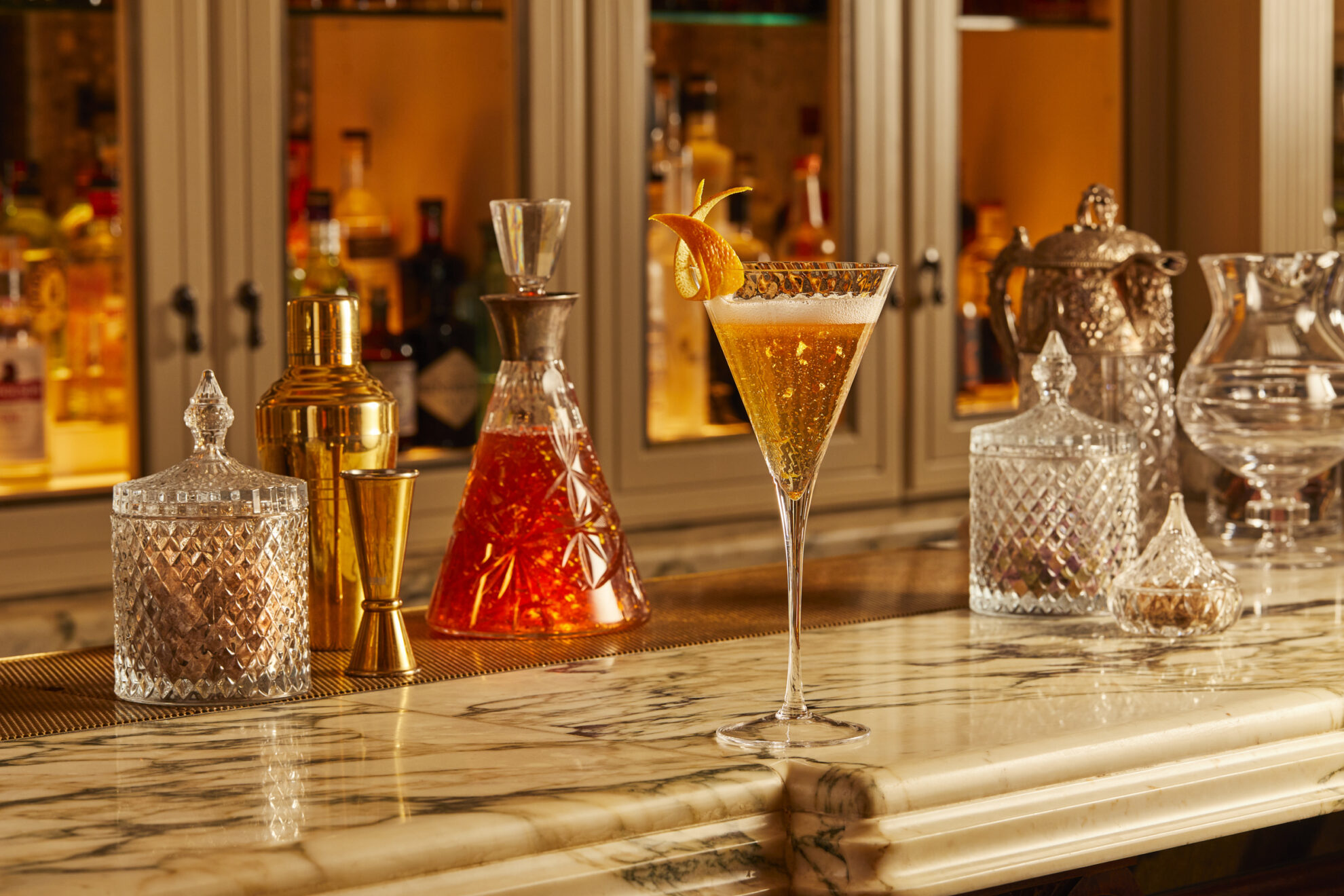 Later, we moved to the Dining Room for dinner. The food was absolutely delicious (it has a Michelin star, after all). An a la carte breakfast with white tablecloths and silver tea pots is served here in the morning (the eggs come from Clarence Court hens.) 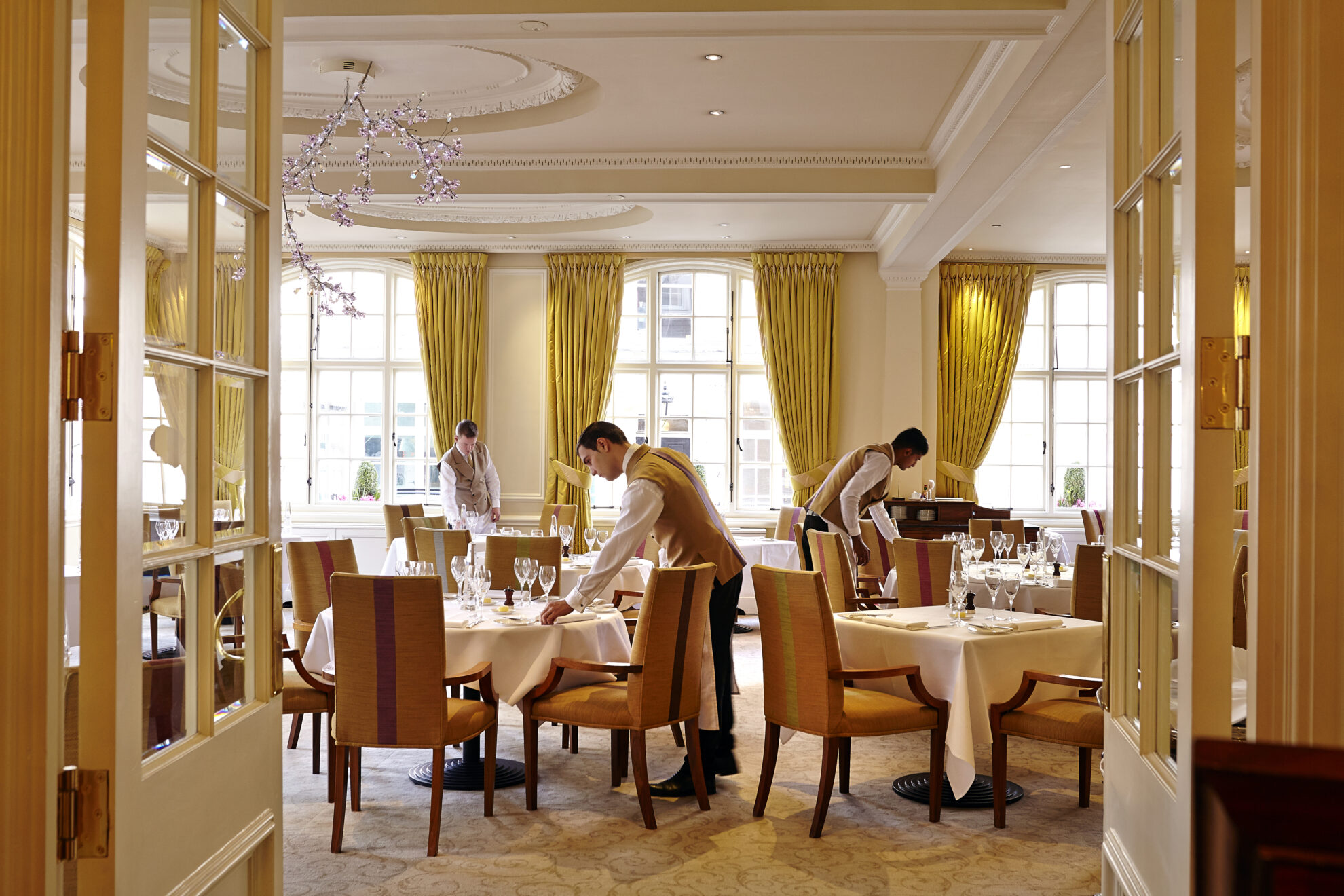 Contemporary and inventive, the Dining Room specialises in British cuisine at its best, but with some European departures. Refined, regal classics include lobster omelette (£38), beef Wellington (served tableside for two – £100) and eggs Drumkilbo (£32), to which the Queen Mother was famously partial. I was particularly impressed with the celeriac and green apple risotto. 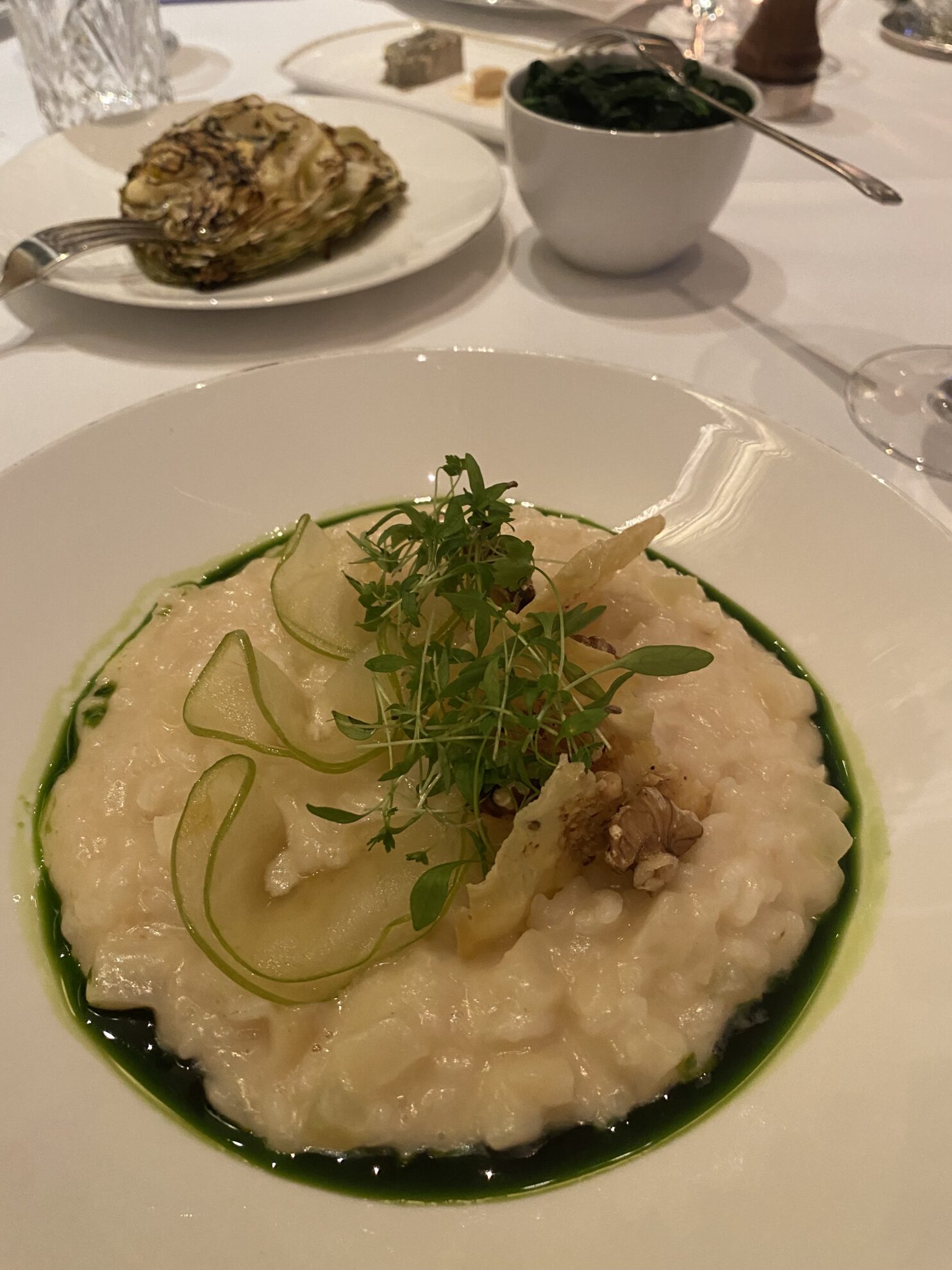 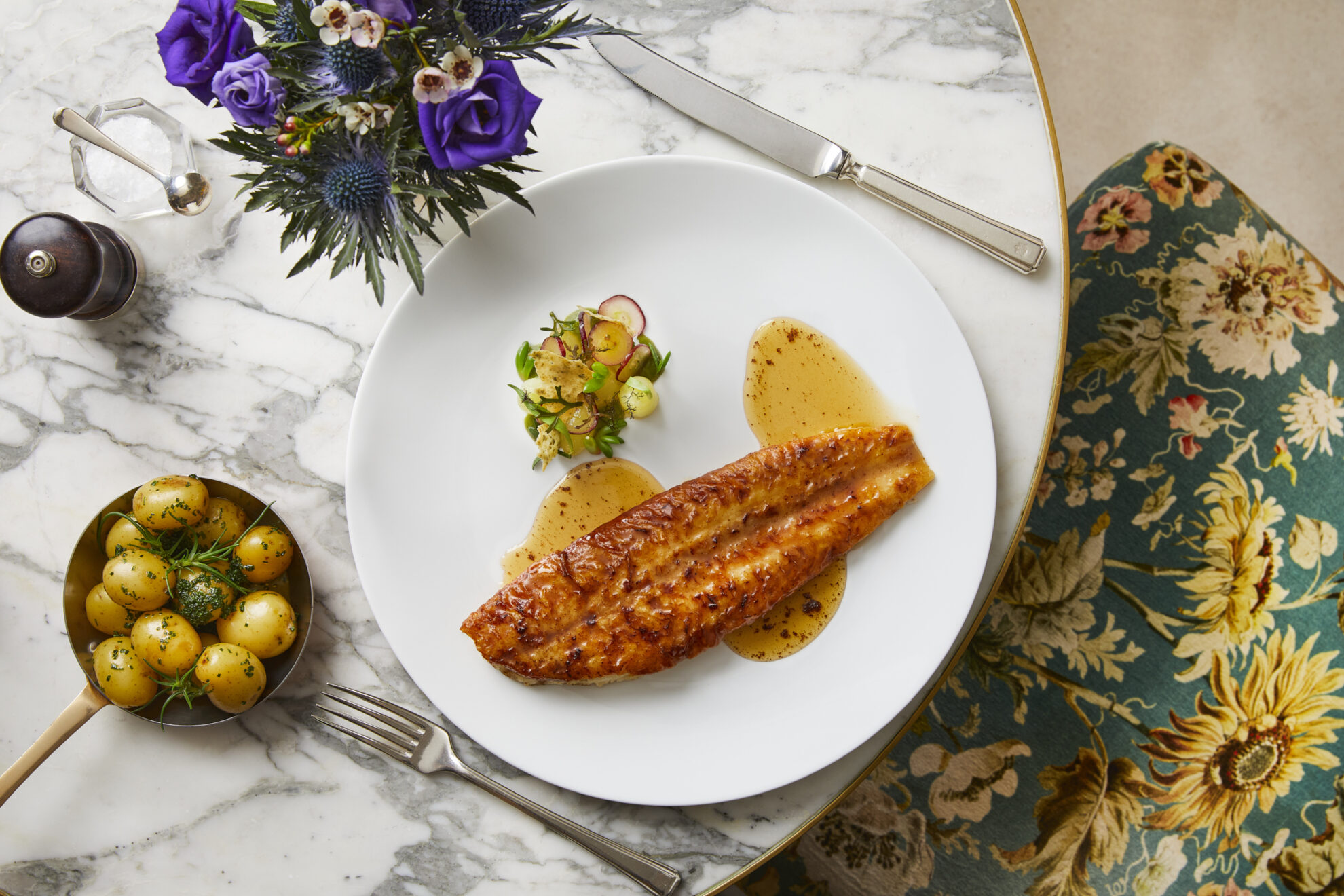 At the end of the night, we retreated to our bedroom upstairs. The Goring is a very boutique property with just 69 rooms – the decor varies throughout but all room are bedecked in silk-lined walls and plush velvet upholstery. Stays cost upwards of £700 a night. Beds are made up with crisp Italian cotton sheets. Our Deluxe Garden View room was peaceful and cosy, and came with a compact marble bathroom with a tub and walk-in rainshower (plus toiletries from British luxury brand Asprey). Here are pictures of some of the rooms available… 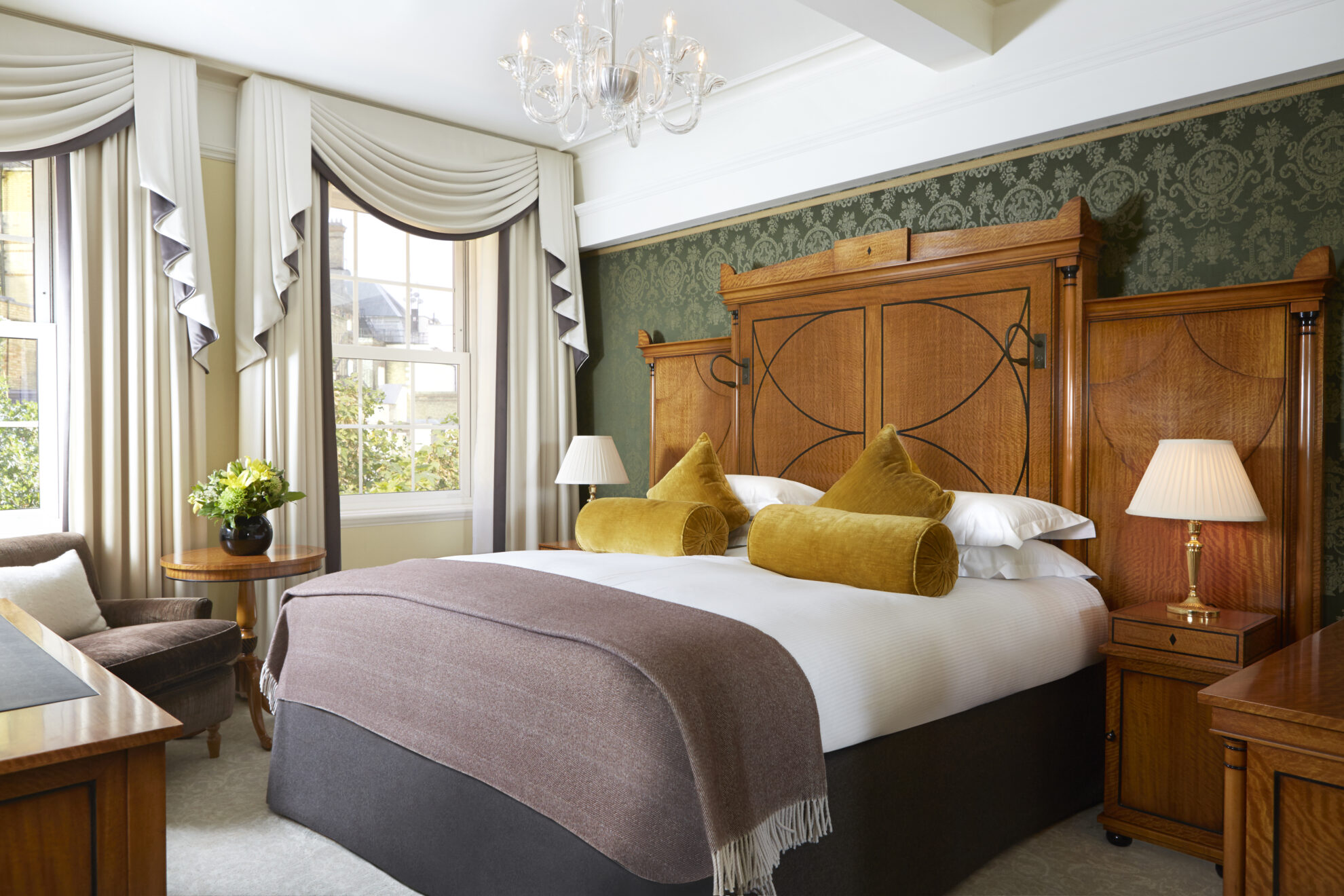 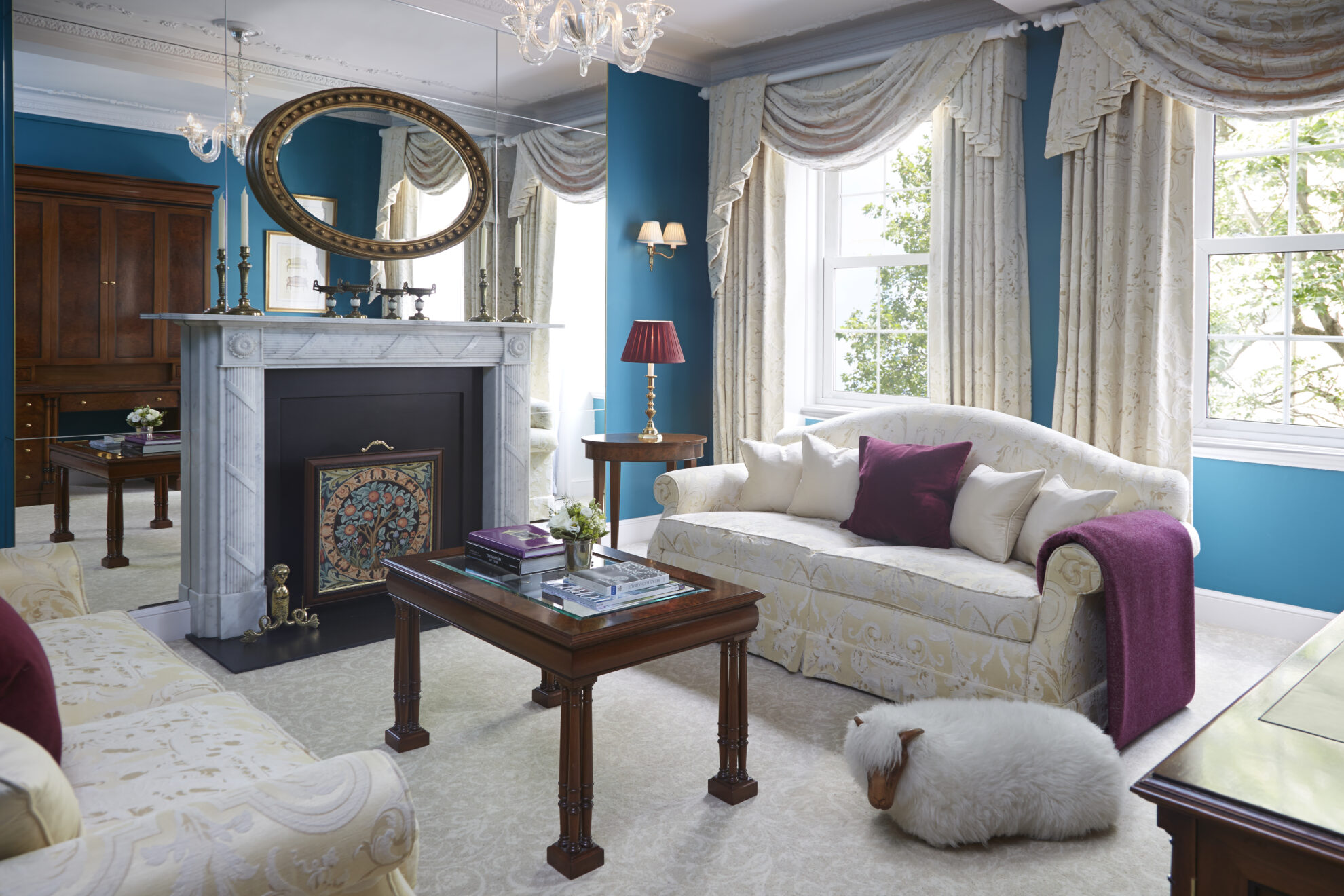 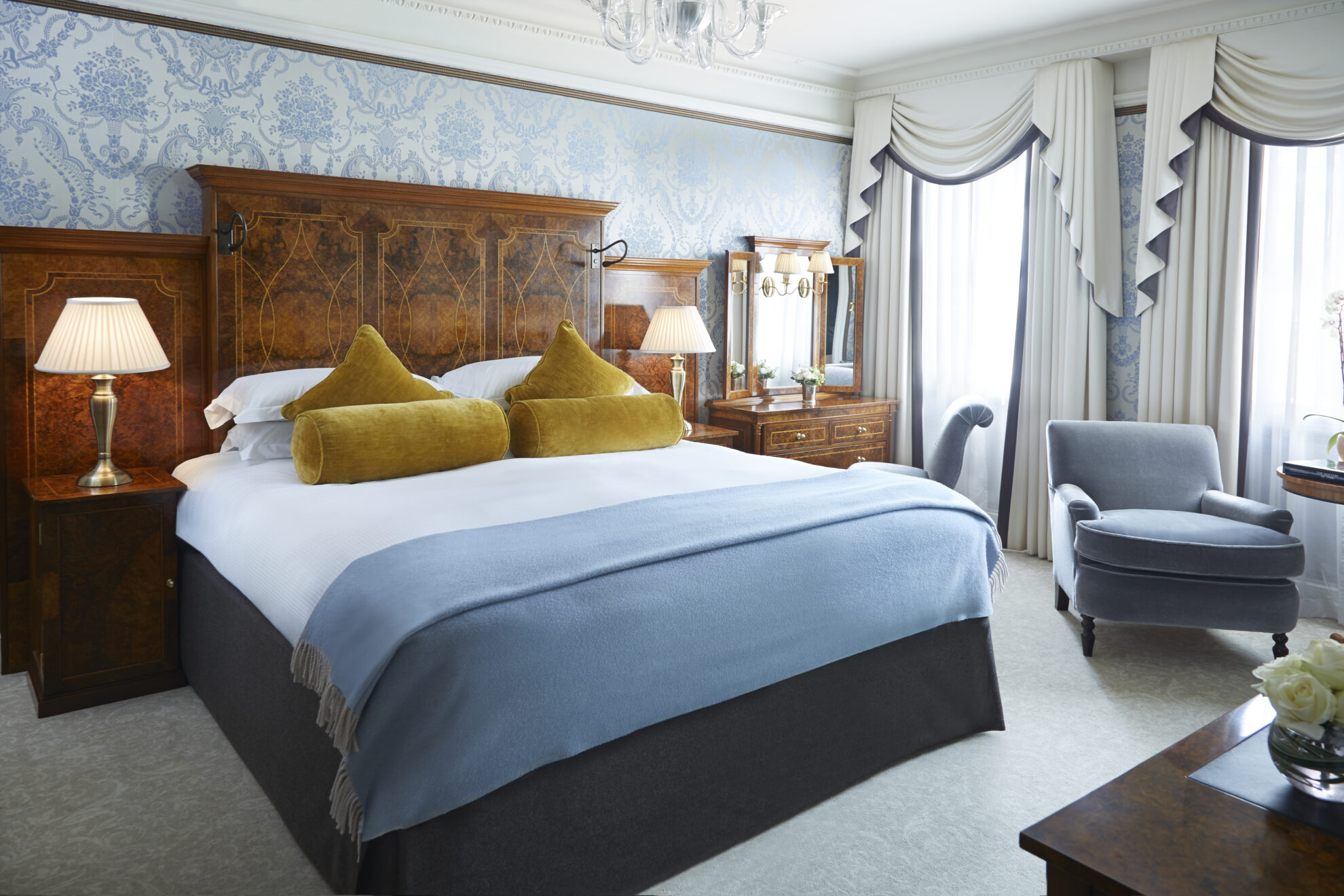 Weddings at the Goring

Always on the look out for trends, Globetrender was interested to learn that the Goring excels in intimate, “inner circle” weddings for up to 35 people. Since the pandemic, there has been increased demand for in-house ceremonies and parties at the property, ramping up to three or four a week, from one or two a month in 2019. 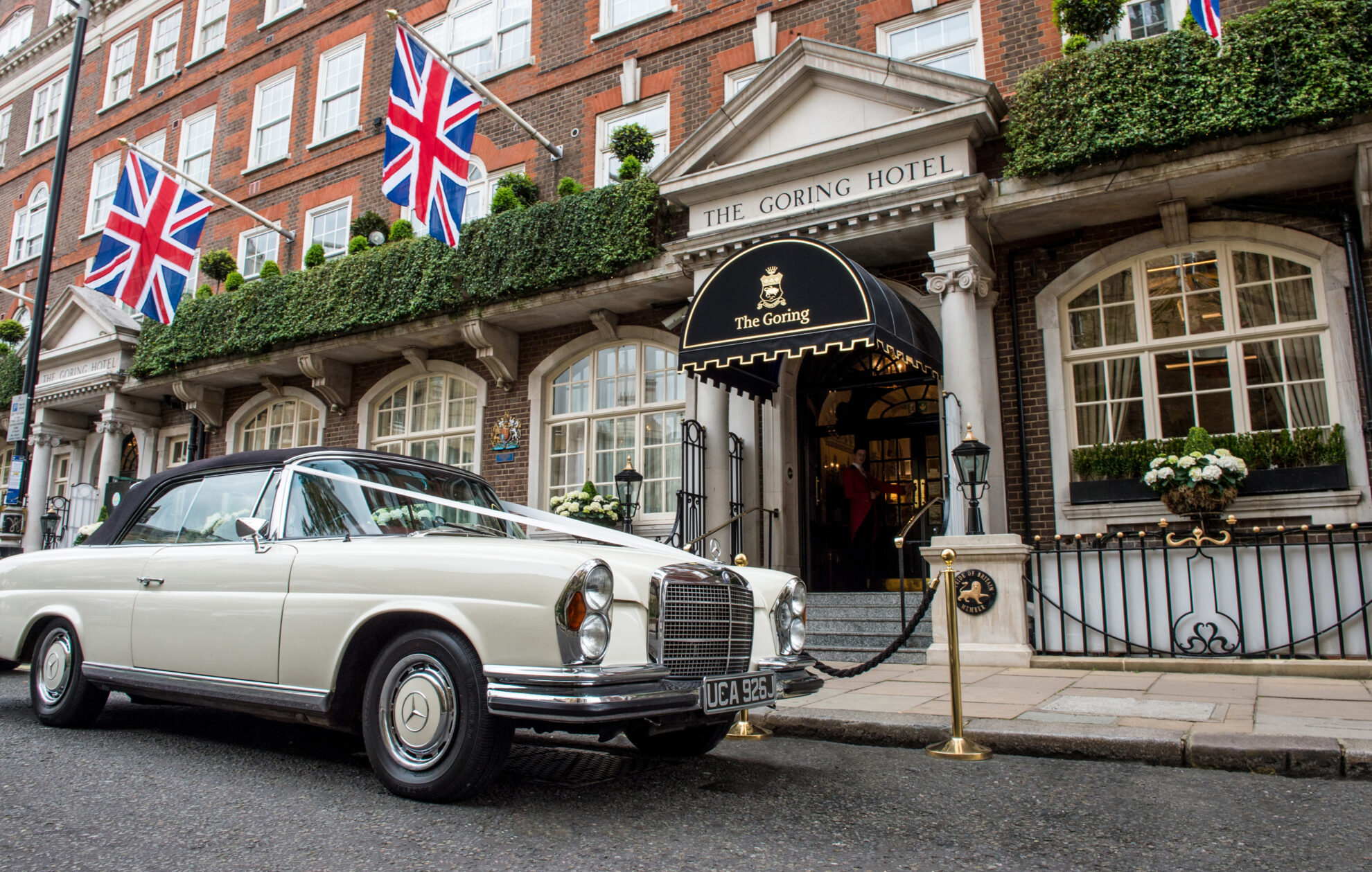 The Goring tells Globetrender that whereas in the past, couples might have invited large numbers of guests, there has been a shift towards inviting just close friends and family and using excess budget to invest in more indulgent food, wine, flowers, cars and carriages. 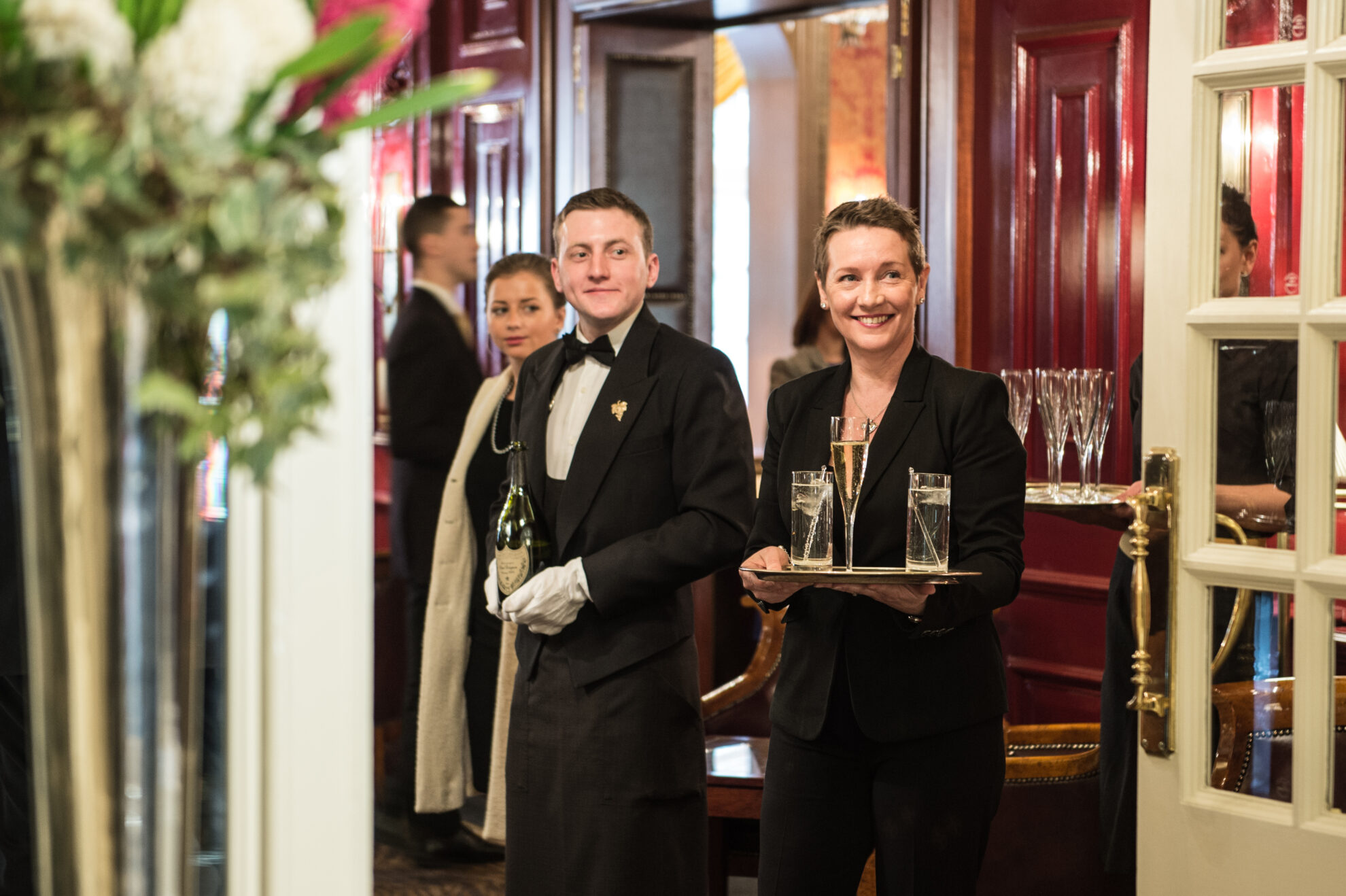 The hotel is fully licensed to conduct wedding ceremonies and civil partnerships on-site, and there are a number of private dining rooms for the meal. Options include a takeover of the Veranda restaurant, which overlooks the garden; the Drawing room, with wallpaper embroidered in red silk thread; and the Garden room for receptions of up to 100 people standing. (Couples can also get married in a nearby church before coming to the hotel.)

Unlike many traditional English hotels that can be fusty, dusty and pompous, the Goring is polished, fresh and keeping up with the times. I liked that it hasn’t tried to integrate lots of gimmicky technology and remains deeply proud of its connection to the royal family. Service is extremely classy, and the drinking and dining truly outstanding. As a Londoner, I have previously overlooked the Goring as a place to go for a cocktail but I will be returning in haste. The restaurant also deserves serious recognition.