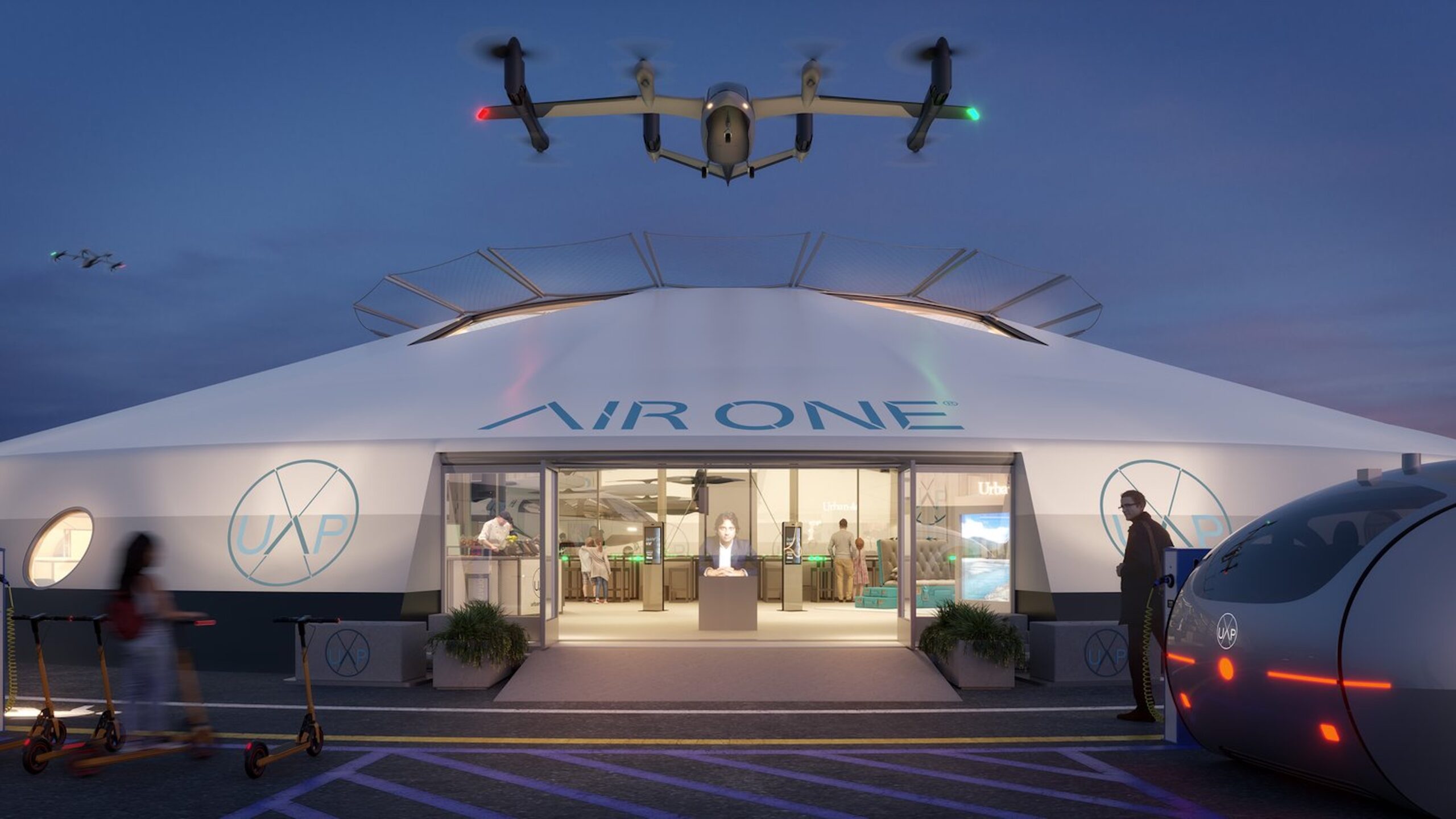 Air-One was created by Urban-Air Port a company that designs, manufactures and operates ground, air and digital infrastructure, including new forms of sustainable air transport. The launch of their first Air-One hub in Coventry, UK, will act as a blueprint for improving urban air mobility globally.

The Coventry Air-One location will prove how the use of eVTOL and autonomous drones can cut congestion and air pollution in cities, and also become integrated with public transport as part of the move towards a zero-carbon future. Following it debut in the UK, Air-One will be deployed in new locations and environments across the world – with more than 200 sites planned worldwide over the next five years.

Designed for rapid assembly and disassembly, Air-One is a 1,700 sqm pre-fabricated vertiport. A central 17-metre diameter aircraft carrier sits at the centre of the structure to support the take-off and landing of eVTOL vehicles. 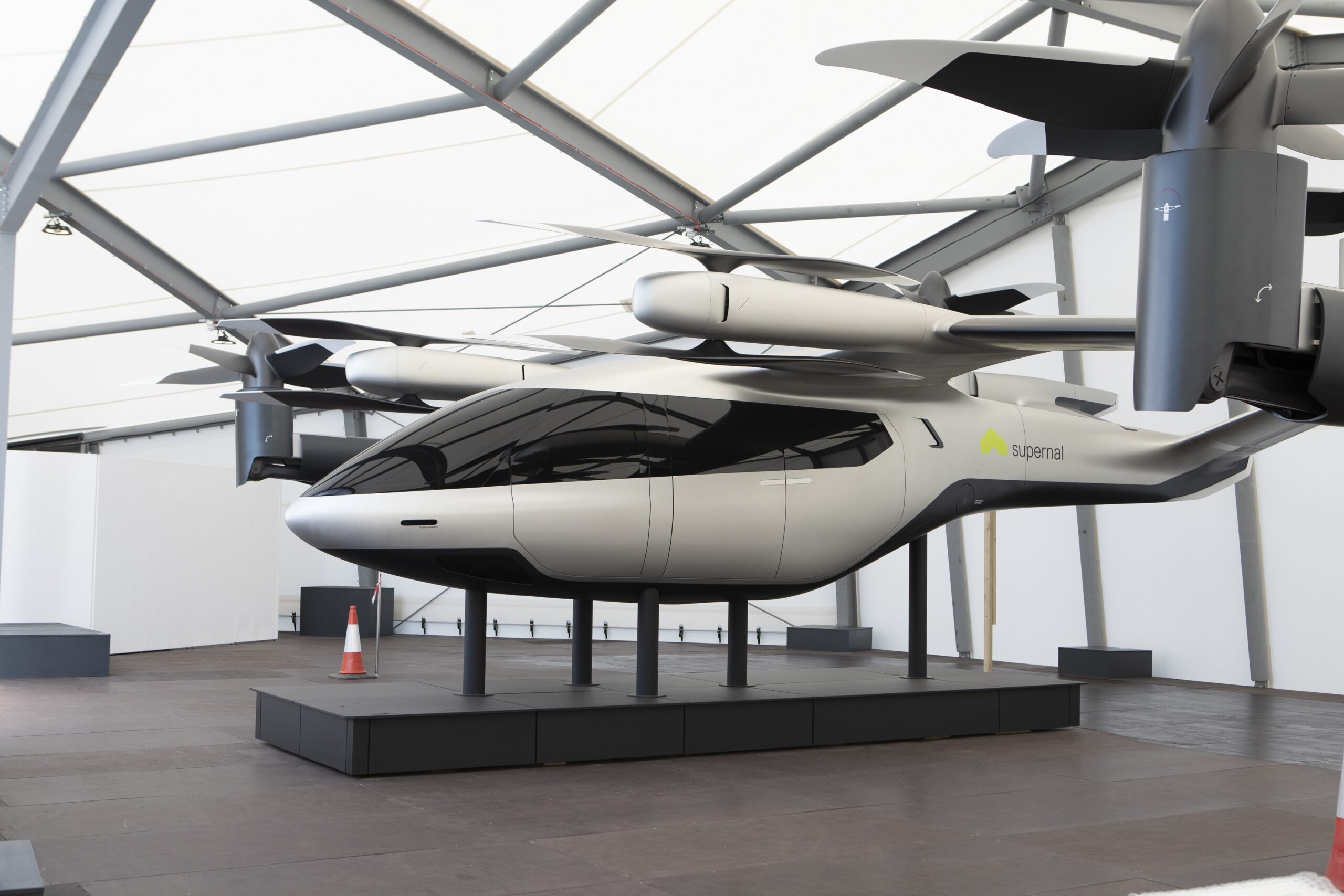 Air-Port’s interior allows the public to enter and explore its passenger and operational zones, including its passenger lounge; food, beverage and retail offerings; aircraft command and control centre; charging, refuelling and maintenance hangar; its dedicated cargo logistics hub; and its passenger processing and boarding zones.

There is also a full-sized model of Supernal’s concept vehicle S-AL on display, alongside other electric vehicles, and drone demonstrations will be carried out throughout Air-One’s time in Coventry. Backed by the UK Government and supported by Supernal – Urban-Air Port will operate Air-One in the heart of Coventry for at least one month.

Coventry was chosen for Air-Port’s launch site due to its location in the heart of the UK, and its heritage in the automobile and aerospace industries. A series of public engagement events at Air-One will engage and inspire the public with the future  of air mobility, and form part of Coventry’s City of Culture celebrations.

The advanced air mobility (AAM) market is forecast to grow by 9 per cent annually to reach US$1 trillion within the next two decades. According to analysis by NASA, one of the single biggest barriers to the sector’s growth is lack of ground infrastructure to serve the growing pipeline of eVTOLS entering commercial operations.

Ricky Sandhu, founder and executive chairman of Urban-Air Port, said: “The opening of Air-One is a momentous moment – the starting gun for a new age of transport, an age of zero-emission, congestion-free travel between and within cities that will make people healthier, happier and more connected than ever before.

“Cars have roads. Trains have rails. Planes have airports. Now, eVTOLs have an Urban-Air Port. From design, through to fabrication and now into operation, Urban-Air Port has delivered Air-One in just 15 months, setting the standard for deployment globally and opening up a world of possibilities for rapid response air mobility. Air-One is just the first model in our infrastructure fleet and our order-book is not only open but already growing.”

Robert Courts, the UK’s minister for Aviation, said: “The opening of Air-One, backed by government funding, will revolutionise the way people and goods travel across the nation. This step forward puts Britain at the vanguard of clean transport, bringing investment and high-skilled, green job opportunities to the nation, while levelling up opportunity in the Midlands.”

Urban-Air Port has other vertiports already planned in the UK in the West Midlands and London, and internationally in the US (Los Angeles), Australia, South Korea, France, Germany, Scandinavia and South East Asia.

In other news, Deloitte’s “Advanced Air Mobility, Disrupting the Future of Mobility” report has revealed that in ten years’ time, electric air-taxi flights could be as cheap as ground taxis, and without the carbon output.

“Our study showed that the speed improvement of these air taxis could be three to five times faster than driving options today,” John Coykendall, principal of Deloitte’s Global and US Aerospace and Defense leader division, told Robb Report. “We believe AAM will integrate with the transportation methods we have today – it’ll be a case of ‘and’ with this type of transport rather than ‘or’ with existing modes.”