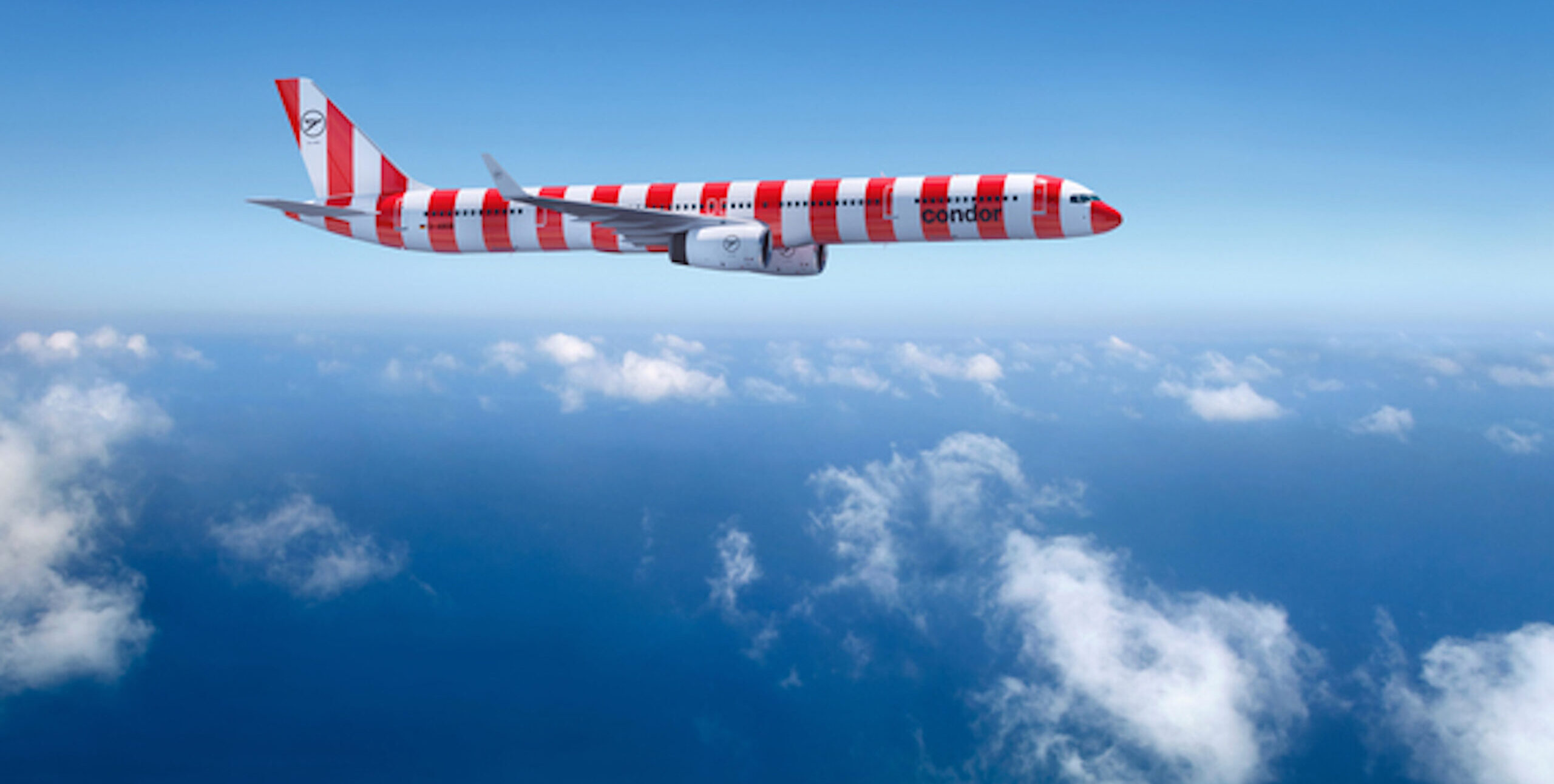 With its new-look paint-job inspired by beach towel stripes, Condor is rebranding itself as an independent leisure airline. Rose Dykins reports

With the new beach holiday-themed stripy exteriors of its planes, Condor wants to show its evolution from a former travel company –  owned by Thomas Cook – into an independent vacation airline.

Ralf Teckentrup, CEO of Condor, says: “Condor has undergone a transformation over the past two-and-a-half years – from a subsidiary of a vertically integrated travel group to an independent airline that looks back proudly on its history and tradition, while at the same time embarking on the path to the future.” 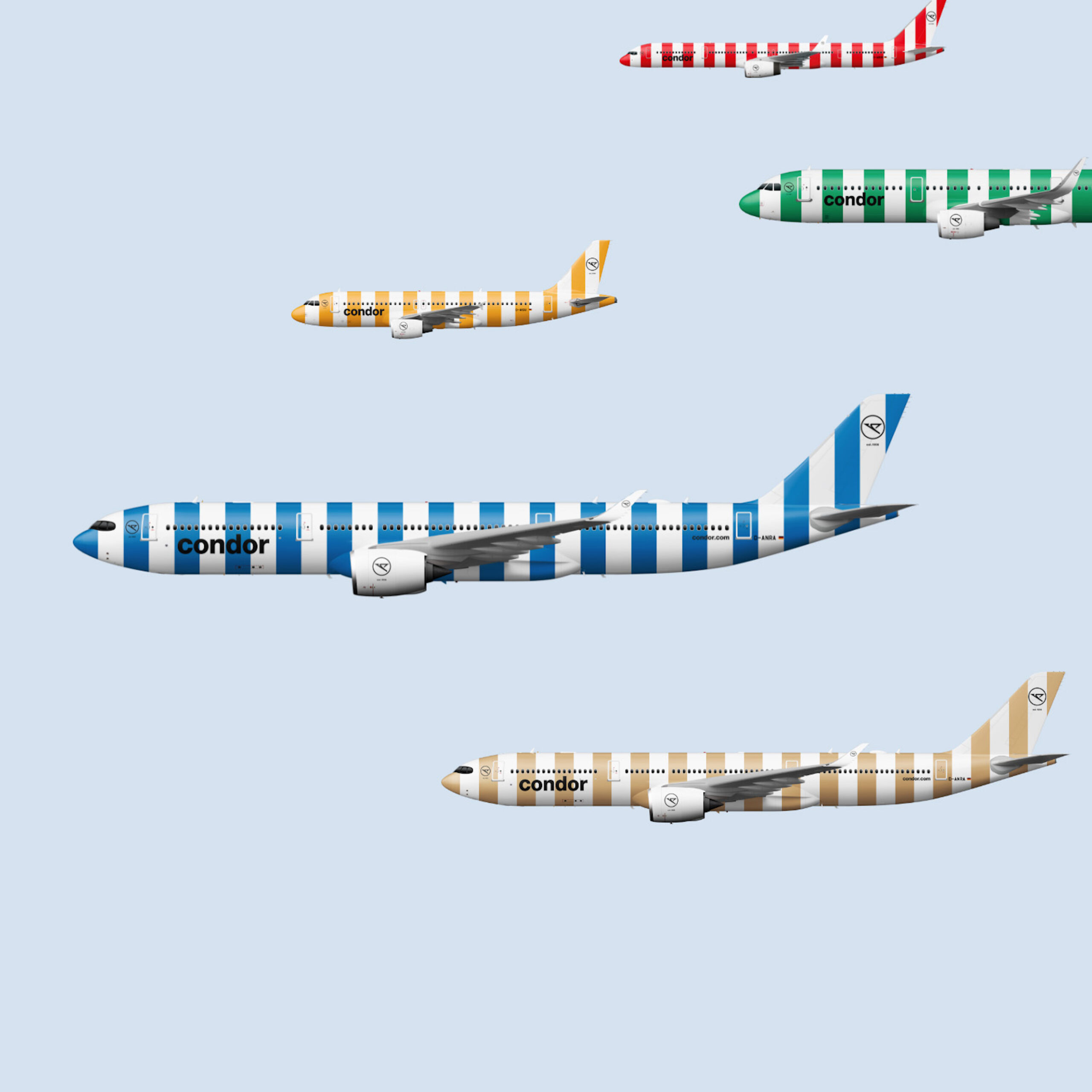 “We want to express this unmistakably through our corporate identity: Condor is vacation and Condor is unmistakable – like our new design, with which we are now launching into the future. What remains is our passion. It has always made Condor unique and is therefore also reflected in our claim: Passion is our compass.”

Condor’s new brand identity was created under the direction of Remo Masala, Berlin-based creative agency Vision Alphabet. He says: “Revising Condor’s brand identity with its long tradition is a delicate interplay based on respect for its origins and requirements for the future.

“Our goal was to endow Condor with a special visual independence, the rationale of which is united in Condor’s brand essence: the invention of the vacation flight, and the effective vacation code, the stripes of summer, joy and freedom.”

The main colours of Condor’s new brand identity are yellow and blue, complemented by a contrasting shade of grey. Condor’s logo, featuring a condor bird in a circle – originally conceived one of Germany’s most influential designers, Otl Aicher – has been given a facelift, with finer and more dynamic lines. It features on the tail of each repainted Condor aircraft.

Meanwhile, the Condor lettering has also been adapted to become more compact and lower case, creating a more independent vibe that feels consistent with the new logo, which appears in high-contrast black on the new-look fuselage.

Initially, Condor’s striped aircraft livery will come in five colours: yellow, red, blue, green, and beige. This range of colours represents the diversity of Condor’s guests, employees and opportunities to discover the world with the airline.

Condor’s crew uniforms will feature the new look too, with accessories such as neckerchiefs, ties and pins now striped in various colours. The brand identity is also being rolled out across Condor’s website, at its airport touchpoints – such as boarding passes, ID cards and airport signage – and on board – including the in-flight cups, blankets and cutlery. Approximately 80 percent of Condor’s fleet is set to be repainted in the new livery by 2024.

The new design was unveiled in Toulouse with the first of its two-litre, green-striped A330neo aircraft, which will enter operations in autumn 2022. The first Condor aircraft in the new look has already taken to the skies on route – a yellow-striped Airbus A321.

Over the coming weeks, five more Boeing 757 and Airbus A320/1 planes from Condor’s fleet will be repainted, meaning six aircraft will fly with the new livery as part of the summer 2022 flight schedule, serving Mallorca, Greece, the Canary Islands and Egypt.